1. Influence of fin arrangement on fluid....2. Effect of particle loading on heat....3. Experimental evaluation of the effect....4. Parameters optimization of a....5. Numerical study of heat transfer....6. Local heat transfer enhancement....7. Heat transfer characteristics of air....8. Three dimensional Couette flow and....9. Study on the heat transfer of cross....10. Experimental observation on a....

Abstract: Compression and expansion of a working gas due to the pressure oscillation of an oscillating flow can lead to a temperature variation of the working gas, which will affect the heat transfer in the oscillating flow. This study focuses on the impact of the compression-expansion effect, indicated by the pressure ratio, on the heat transfer in a finned heat exchanger under practical operating conditions of the ambient-temperature heat exchangers in Stirling-type pulse tube refrigerators. The experimental results summarized as the Nusselt number are presented for analysis. An increase in the pressure ratio can result in a marked rise in the Nusselt number, which indicates that the compression-expansion effect should be considered in characterizing the heat transfer of the oscillating flow, especially in the cases with a higher Valensi number and a lower maximum Reynolds number.

Compression and expansion of a working gas due to the pressure oscillation of oscillating flow can lead to a variation in temperature of the working gas, which will influence the heat transfer between the oscillating flow and the solid wall. However, there is, so far, a lack of the knowledge about the impact of the compression-expansion effect on the heat transfer in oscillating flow, and this impact is seldom considered in the reported work. Swift (1992) and Piccolo (2011) discussed the influence of the drive ratio (the ratio of pressure amplitude to mean working pressure) on the heat transfer in the oscillating flow; however, the relative fluid displacement amplitude (A r=2x A/L=2u A/(ωL), where 2x A is the peak-to-peak displacement of the working gas, u A is the velocity amplitude, ω is the angular frequency, and L is the length of the heat exchanger) was changed with the varying drive ratio in their experiments and simulations. Their discussion concerned the impact of the relative fluid displacement amplitude A r, instead of the compression-expansion effect.

The compression-expansion effect can be indicated by the pressure ratio, which is usually defined as (p m+p A)/(p m−p A) in the field of cryocoolers (where p m is the mean working pressure, and p A is the pressure amplitude). The present work focuses on the impact of the compression-expansion effect on the heat transfer in the oscillating flow via the pressure ratio. An experimental apparatus was built to observe the space-time averaged heat transfer characteristics of a finned heat exchanger. The experimental operating conditions were set according to the ambient-temperature heat exchangers of Stirling-type pulse tube refrigerators (Dietrich and Thummes, 2010; Qiu et al., 2012). The ambient-temperature heat exchangers are used to remove the heat from the warm working gas to the surroundings, and an insufficient heat transfer of the ambient-temperature heat exchangers could deteriorate the refrigeration performance of the pulse tube refrigerators. After a description of the experimental apparatus including the measurement system, the dimensionless similarity criteria used in this study are introduced. The experimental results are summarized into Nusselt number. The emphasis will be put on the dependence of the Nusselt number on the pressure ratio.

Fig. 1 shows the schematic of the experimental apparatus, consisting of a linear compressor, a test heat exchanger, a needle valve, and a reservoir. 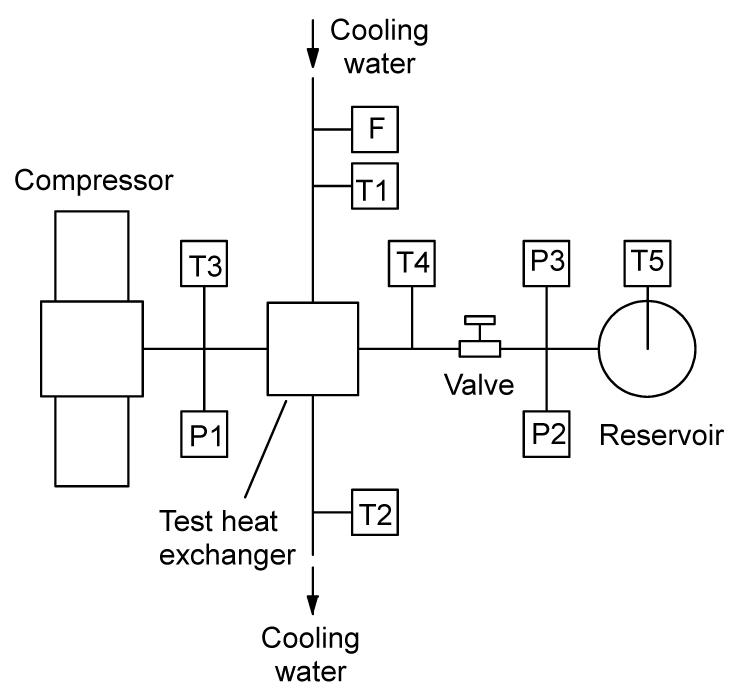 The linear compressor, which is usually used to drive a Stirling cooler or a Stirling-type pulse tube refrigerator, is the generator of the oscillating flow. The K535 compressor fabricated by Ricor and the 2S102W compressor fabricated by QDrive were used to realize diverse operating conditions. To ensure safe operation, the working current and voltage of the K535 compressor were restricted below 10 A and 50 V, respectively, and those of the 2S102W compressor were controlled below 4 A and 110 V, respectively. The compressor was powered by an AC power supply of Type-PCR1000LA, fabricated by the Kikusui Electronics Co., with the operating parameters of AC 1–150 V/2–300 V, 1 kVA, and 1–999.9 Hz. 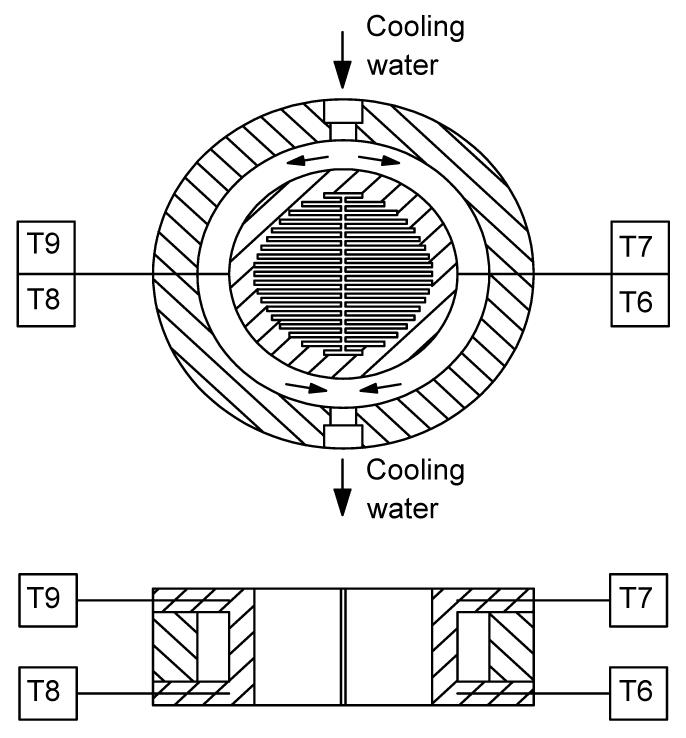 The measured parameters include temperature, pressure, and flow rate, as shown in Figs. 1 and 2.

The pressures, P1 and P2, were measured by two pressure sensors with the range of 0–5 MPa and the accuracy of 0.2% FS (10 kPa). A dynamic pressure sensor P3 with an accuracy of 0.57 kPa was used for more accurate measurement of the dynamic pressure in the reservoir. The pressure amplitude p A3 in the reservoir is a key parameter for calculating the velocity amplitude u A in the test heat exchanger, and then with a known u A, the maximum Reynolds number Re max, the Mach number Ma, and the relative fluid displacement amplitude A r can all be calculated. More details of the related formulae will be given in the next section.

Besides the temperature and pressure measurement, a mini turbine flowmeter with an accuracy of 0.005 L/min was used for the measurement of the cooling water.

Dimensionless similarity criteria were used in this study to summarize the experimental data. Five dimensionless similarity criteria, i.e., the maximum Reynolds number Re max, the Valensi number Va, the Prandtl number Pr, the specific heat ratio γ, and the Mach number Ma, were determined according to the governing equations (Anderson, 1995) for the unsteady flow of compressible viscous fluid (Appendix). The Prandtl number and specific heat ratio are the thermophysical properties of working fluid. The definitions of Re max, Va, and Ma are as follows: where u A is the velocity amplitude, D h is the hydraulic diameter, ω is the angular frequency, ν is the kinematic viscosity, and a is the sound speed. According to the pressure amplitude p A3 in the reservoir measured by sensor P3, the velocity amplitude u A can be calculated by (Tang et al., 2008): where U A is the volume velocity amplitude, A flow is the flow area in the test heat exchanger, C res is the compliance of the reservoir, f is the frequency, V res is the volume of the reservoir, and p m2 is the mean working pressure in the reservoir measured by sensor P2.

As previously mentioned, the peak-to-peak displacement of the working fluid with respect to the length of the heat exchanger is an important factor for the heat transfer in oscillating flow (Swift, 1992; 2002; Piccolo, 2011). The dimensionless parameter of the relative fluid displacement amplitude A r was also considered in this study.

The space-time averaged heat transfer performance is presented by the Nusselt number, which is defined as where k is the thermal conductivity of the working fluid, h is the convective heat transfer coefficient, Q h is the heat flow transferred from the oscillating flow, A 1 is the area of the base surface, A 2,i and η fin,i are the surface area and the fin efficiency of the ith fin, respectively, n is the number of the fins, and t f and t wi are the temperatures of the oscillating flow and the base surface, respectively.

Additionally, the average temperature of T3 and T4 is taken as the temperature of the oscillating flow t f. The wall temperature t wi is determined according to thermometers T6, T7, T8, and T9, considering the thermal conduction inside the copper wall. The fin efficiency η fin,i is calculated with the typical formulae for the rectangular fin (Incropera et al., 2007).

With helium as the working gas, the heat transfer performance of the finned heat exchanger was tested under a mean working pressure of 2.0 MPa with the K535 compressor, and was also tested under a higher mean working pressure of 2.5 MPa with the 2S102W compressor. The operating frequency ranged from 45 Hz to 100 Hz. According to the critical dimensionless value (β cri=2Re max/Va 0.5) of 400–780 (Merkli and Thomann, 1975; Hino et al., 1976), all the oscillating flow cases in our experiments were in the range of laminar flow.

Table 1 tabulates the typical experimental data under the mean working pressure of 2.0 MPa. p m1 and PR1 denote the mean working pressure and the pressure ratio at P1 (Fig. 1), respectively. Since the mean working pressure was kept almost constant and the variation of working gas temperature t f was small (less than 10 K), the Prandtl number and the specific heat ratio, calculated by REFPROP 8.0, are constant. By adjusting the voltage and the frequency of the AC power supply, as well as the opening of the needle valve, the dependence of Nusselt number on pressure ratio was tested with the maximum Reynolds number, and the Valensi number almost fixed. According to Eqs. (1) and (3), the fixed maximum Reynolds number implies an almost constant Mach number, due to the tiny variation of the sound speed in our test. Moreover, for the test heat exchanger, the almost fixed velocity amplitude and angular frequency implied by the maximum Reynolds number and Valensi number (Eqs. (1) and (2)) lead to roughly unchanged relative fluid displacement amplitude.

Additionally, a stronger compression-expansion effect, indicated by a larger pressure ratio, can enhance the heat transfer of the oscillating flow shown by a larger Nusselt number. This may be attributed to the disturbance of the thermal boundary layer. A higher pressure ratio operation can lead to a stronger oscillation of the working gas temperature, which implies a sharper variation of the temperature gradient inside the thermal boundary layer. This thinking still needs to be validated by experimental observation or numerical modeling of the temperature distribution. 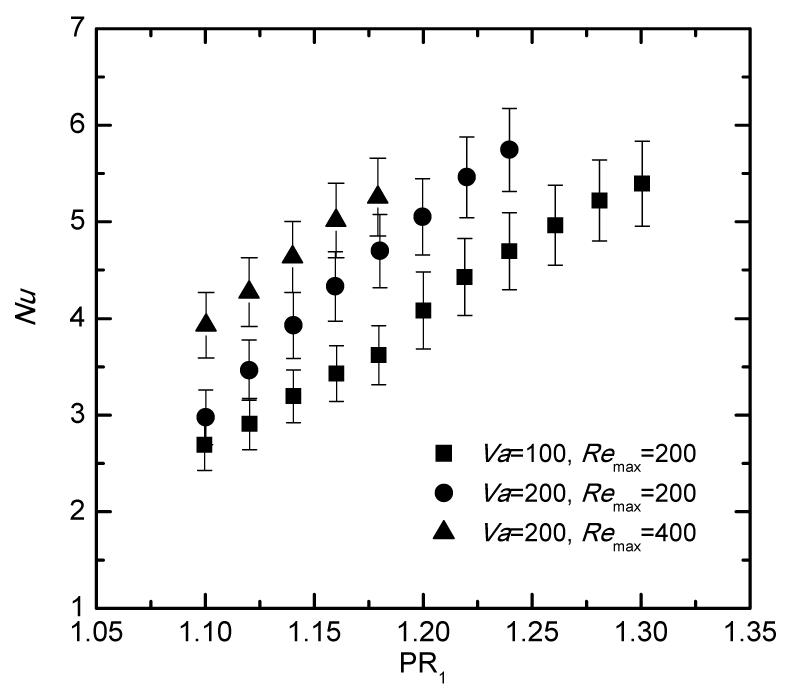 Fig.3
Dependence of the Nusselt number on the pressure ratio with a mean working pressure of 2.0 MPa 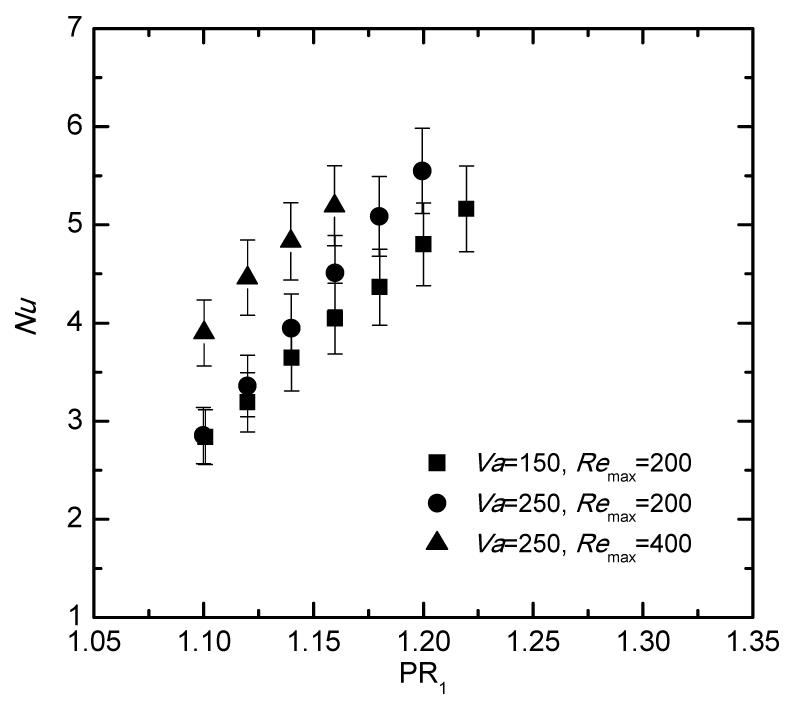 Fig.4
Dependence of the Nusselt number on the pressure ratio with a mean working pressure of 2.5 MPa


*&nbspProject (No. 51176167) supported by the National Natural Science Foundation of China

This appendix presents the determination of the five dimensionless similarity criteria, i.e., the maxi-mum Reynolds number max, the Valensi number , the Prandtl number , the specific heat ratio , and the Mach number .

The governing equations for the unsteady flow of compressible viscous fluid, as well as the equation of state for ideal gas, are as follows (Anderson, 1995): where , , , p, , , and are the temperature, pressure, density, constant-pressure specific heat, viscosity, thermal conductivity, and gas constant, respectively. is the vector of velocity, and are two tensors, is the time, and denotes the energy dissipation due to the viscosity.

The following dimensionless parameters with the superscript* are defined to normalize Eqs. (A1)–(A4). where the subscript 0 indicates the characteristic parameters to nondimensionalize the variables.

Substituting Eq. (A5) into Eqs. (A1)–(A4) gives the nondimensional forms of the governing equations and the equation of state as follows: where and are the kinematic viscosity and the thermal diffusivity, respectively.

Considering the characteristics of the oscillating flow, we set and

According to the above dimensionless governing Eqs. (A12)–(A14), we can determine the five dimensionless similarity criteria for the oscillating flow, i.e., the maximum Reynolds number max, the Valensi number , the Prandtl number , the specific heat ratio , and the Mach number .

[19] Swift, G.W., 2002.  Thermoacoustics: A Unifying Perspective for Some Engines and Refrigerators. Acoustical Society of America, American Institute of Physics,New York :