1. Quantitative evaluation of air....2. Relationship of public preferences....3. Dispersion modeling and health risk....4. EDVAM: a 3D eye-tracking dataset for....5. Chinese public understanding of the....6. Characterization of on-road CO, HC....7. Theory and techniques for....8. The fracture network model of Shen....9. Emission inventory and trends of NOx....

Abstract: Motor vehicles are the major source of urban air pollution. The abatement of air pollutant emissions is an urgent task for environmental protection. This paper simulated the abatement for carbon monoxide (CO), volatile organic compounds (VOCs), nitrogen oxides (NO x ), and particular matter (PM) emissions from vehicles under four scenarios in the year 2015 in Hangzhou, China. It was found that the emissions of CO, VOCs, NO x , and PM from vehicles were 440.551, 23.079, 44.255, and 6.532 kt/a in 2010 in Hangzhou, respectively. The vehicle population will increase to over 1.2 million with a 60.7% growth rate until 2015 (estimated). Based on the scenario analysis, it was found that eliminating substandard vehicles and upgrading vehicle’s standards could help reduce CO and VOCs effectively, while the expected abatement of NO x and PM would be offset by the rapid increase in the vehicle numbers. It was also found that integrated measurements, including eliminating substandard vehicles, upgrading vehicle standards, supplying low sulfur oil, and introducing alternative fuel vehicles could simultaneously reduce the four key pollutants. These integrated policies make it possible to reduce 250.197, 10.270, 1.791, and 0.335 kt/a CO, VOCs, NO x , and PM with 56.79%, 44.50%, 4.05%, and 5.14% decrease rates in 2015, respectively, when compared to those in 2010.

The vehicle population in China has grown rapidly since 1980. The total number of motor vehicles reached 190 million in 2010 with an annual growth rate of 12.6% from 1980 to 2010 (SEPA, 2011). However, Chinese per capita ownership of road vehicles, especially passenger cars, is still much lower than that of developed countries and the average world level (Wang H.K. et al., 2011). Some researchers have predicted that the vehicle population of China will increase more than 1470 million by the year 2030 (Zhang et al., 2010; Hao et al., 2011). The rapid vehicle increase has resulted in more and more serious problems (Zhang et al., 2008a), especially the degradation of air quality in urban areas (Saikawa et al., 2011). For example, carbon monoxide (CO) emission from motor vehicles contributed to 76.5% and 81.5% of the total air pollutants in Beijing and Hangzhou, respectively. The contribution rate for nitrogen oxides (NO x ) increased to 41.5% and 68.4% in the aforementioned two cities (Hao et al., 2001, Zhang et al., 2008a). Vehicular NO x , volatile organic compounds (VOCs), and particular matter (PM) emission contributions in the Pearl River Delta Region, China were 79.7%, 69.8%, and 77.9%, respectively (Che et al., 2009). In several major cities, haze days have reached more than 30% for the entire year, some even up to 50%. Therefore, it is extremely urgent to reduce the emissions from vehicles. However, the control measurements and the relative benefits are confusing.

Implementing stringent vehicle emission limit standards is a very efficient method for abating emissions from vehicles (Wu et al., 2011). China has ratcheted down the emission limits for its major vehicle categories by implementing the Euro path guidelines since the late 1990s, National-I standard in 2000, National-II standard in 2004, and National-III standard in 2007. However, we found that the overall vehicle fleet emission factors reached their peak when implementing National-III due to vehicle deterioration (Zhang et al., 2008b). After implementing the National-IV vehicle emission standard, fleet emission factors can clearly be reduced (Zhang et al., 2008b). Research data from the American Environmental Protection Agency (EPA) indicated that hydrogen carbon (HC), CO, and NO x emissions were reduced by approximately 7%, 8%, and 5%, respectively, when fuel sulfur content was reduced from 327 mg/kg (similar to the National-III fuel of China) to 49 mg/kg (similar to the National-IV fuel of China) (EPA, 2001). China has also launched a fuel desulfurization process to improve oil quality. However, the fuel sulfur content reached 150–350 mg/kg by 2010 because of the limitations of the fuel refinery technology in China. Furthermore, this value only meets the National-III fuel standard, which is still more inferior to developed countries (Feng et al., 2011). Therefore, to only improve oil standards is not enough to reduce motor vehicle emissions in China. Most studies suggested that 10% of vehicles produced 50%–60% of all vehicular emissions (Beydoun and Guldmann, 2006), so eliminating high emission vehicles can effectively abate vehicle emissions. China started a policy in June 2009 to encourage car owners to eliminate old vehicles, especially the pre-National-I emission standard vehicles. However, the National-I and National-II emission standard vehicles were still primarily the ones which contribute to overall fleet emissions due to their deterioration (Guo et al., 2006). Alternative strategies involving choices of fossil fuelled or low emission vehicles became an important measurement to reduce vehicle pollution (Oxley et al., 2012). For example, it was found that the reduction of PM and NO x emissions from compressed natural gas (CNG) buses ranged from 61% to 80% and from 12% to 40%, respectively, which were lower than that of Euro III diesel buses (ICCT, 2009). Battery electric vehicles (BEVs) and hybrid electric vehicles (HEVs) can also help reduce vehicle emissions, especially BEVs in south China (Hu et al., 2010). In 2009, the Chinese government initiated a program named “Ten cities and Thousand Vehicles” to introduce alternative energy vehicles, especially BEVs, through government subsidies. However, the large-scale promotion of BEVs is limited by charging stations and other facilities necessary to utilize such vehicles. In summarizing, single control measures cannot be effective in reducing vehicle emissions and integrated management measures must be taken. This paper evaluates vehicle emissions abatement by different integrated measures in a scenario analysis from 2011 to 2015 in the case city of Hangzhou. CO, VOCs, NO x , and PM were chosen as analysis factors and 2010 is selected as the base year. Four scenarios, business as usual (BAU), eliminate substandard vehicle (ESV), high-standard oil replacement (HOR), and alternative energy replacement (AER), were designed to investigate the vehicular emissions reduction potential and to find out the most effective approach. In each scenario, the prospective abatement quantity and reduction rates were evaluated. Finally, the most effective motor vehicle emission reduction policy and the potential management strategies were provided for the government.

Hangzhou is a typical mega city in the Yangtze Delta of south China. The urban area of Hangzhou consists of five districts, covering a 3068 km2 area, and has a population of 4.35 million (Fig. 1). In the past decade, the number of vehicles in Hangzhou increased dramatically. By the end of 2010, the urban area of Hangzhou had over 0.69 million vehicles, which is about 2.03 times that the number in 2004. Recently, the air quality in Hangzhou significantly deteriorated with the increasing number of vehicles. 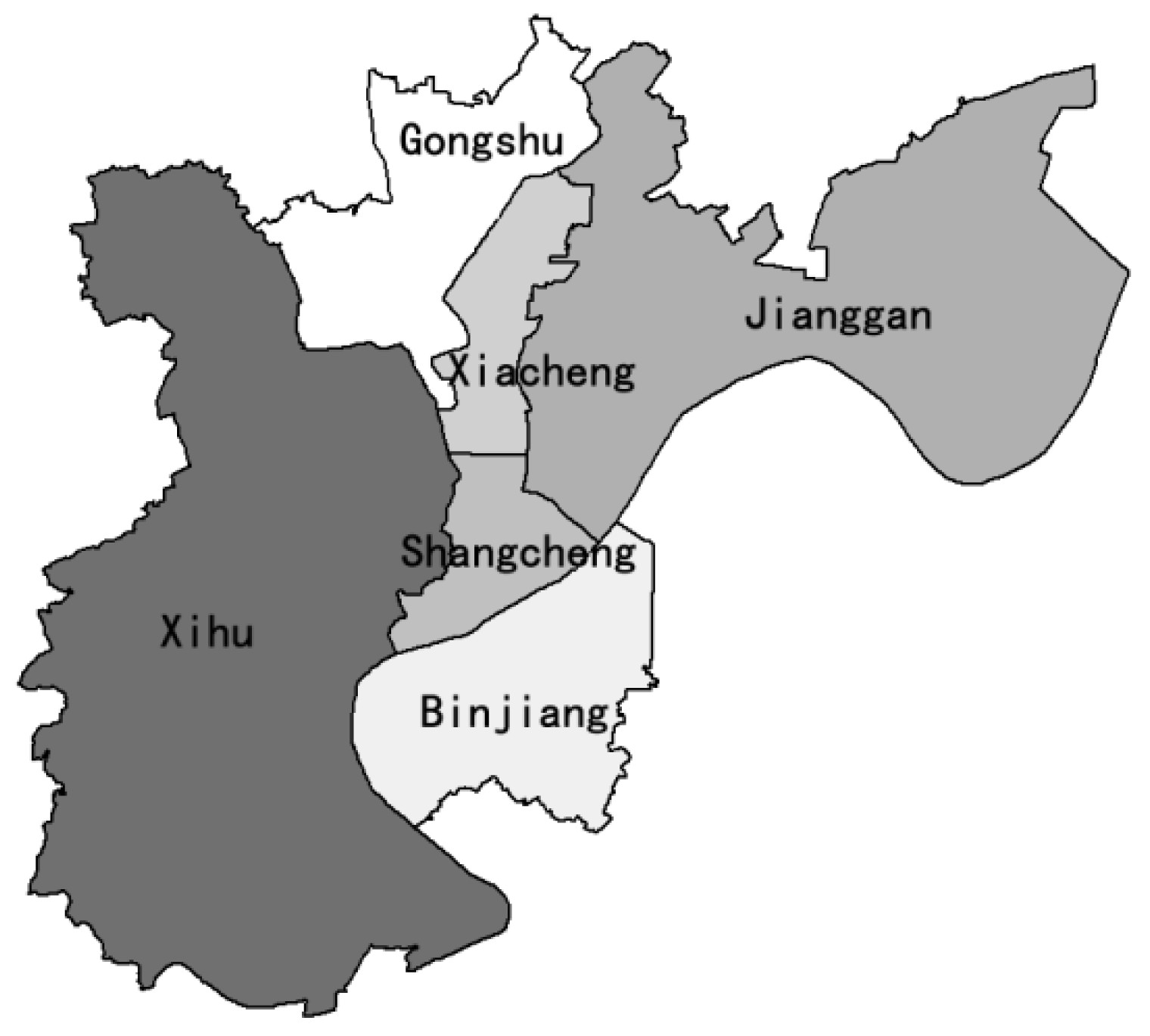 Fig.1
The map of Hangzhou, China

The long-range energy alternative planning (LEAP) system, developed by the Stockholm Environment Institute in 1997, was used for determining the vehicle number predictions in this study (Kumar et al., 2003; SEI-B, 2011). It allows for the prediction to consider future energy demand, environmental development existing technologies, as well as advanced technologies, which may be developed in the future.

Eq. (1), used to forecast PCs number from 2011 to 2015, is a function embedded in the LEAP model that uses per capita gross domestic product (GDP) to forecast per capita vehicle ownership: where Stock i means the stock of the PCs in the ith year, fi represents the formulation of vehicle growth with GDP, i is the estimated year, and θ is the elastic coefficient. The value of θ in China can be deduced from the economic status since different economic periods determine the pattern of motorization (Nurrohim and Sakugawa, 2005). Thus, by comparing the GDP and GDP growth rate in Hangzhou with other cities, we obtained θ as 1.1 in our study (Nurrohim and Sakugawa, 2005). To predict the population of PCs in the target year, two driving factors, i.e., annual economic growth rate and annual population growth rate, should be determined. The annual GDP growth rate is defined as 10%, according to ‘Hangzhou 12th Five-Year National Economic and Social Development Plan’ (ZJPDRC, 2012). The annual population growth rate is calculated according to the statistical yearbook of Hangzhou from 2004 to 2010.

The vehicle numbers of buses, taxies, Lts, and Hts in the target year were predicated according to the regression functions with the number of vehicles from 2004 to 2010. For all the predicated vehicles, we assumed that the proportional rate of gasoline and diesel vehicles was the same as that in 2010, and then the vehicle numbers of different vehicle types and fuel types were projected during 2011 and 2015.

The HOR scenario was set under the ESV scenario. Moreover, we suppose that the urban area of Hangzhou will supply high quality oil in 2013 and the sulfur concentration of both gasoline and diesel will decrease to 50 mg/kg. That means oil will meet the National-IV fuel standard after 2013.

Vehicle emission factors were calculated by the international vehicle emission (IVE) model which was modified in our previous studies (Guo et al., 2007a; 2007b; 2007c; Zhang et al., 2008b). Vehicle driving distribution and fleet distribution were collected based on road tests carried out on four typical types of streets (expressway, highway, arterial way, and residential way) in the Hangzhou district during 2010, including weekend and weekday tests from 7:00 to 21:00. Finally, the integrated running and start-up emission factors for CO, VOCs, NO x , and PM were calculated. Vehicle kilometers traveled (VKT) and daily start-up times were collected from previous study (Zhang et al., 2008b).

In the various scenarios, parameters remain the same as the basic year, excluding emission factors, which were estimated by the modified IVE model. Emission factors of BEVs were set at zero. Additionally, emission factors for HEV-PCs (Li et al., 2009), HEV-Buses (Song et al., 2007), and CNG-Buses (Wang A.J. et al., 2011) were obtained from previous studies (Table 2). The VKT and daily start-up times of each vehicle type were assumed to be unchanged in the four scenarios. Then vehicle pollutant emission inventories in 2015 were established by Eq. (2). Finally, the reduction rates were calculated for each scenario to compare with the baseline emission levels. 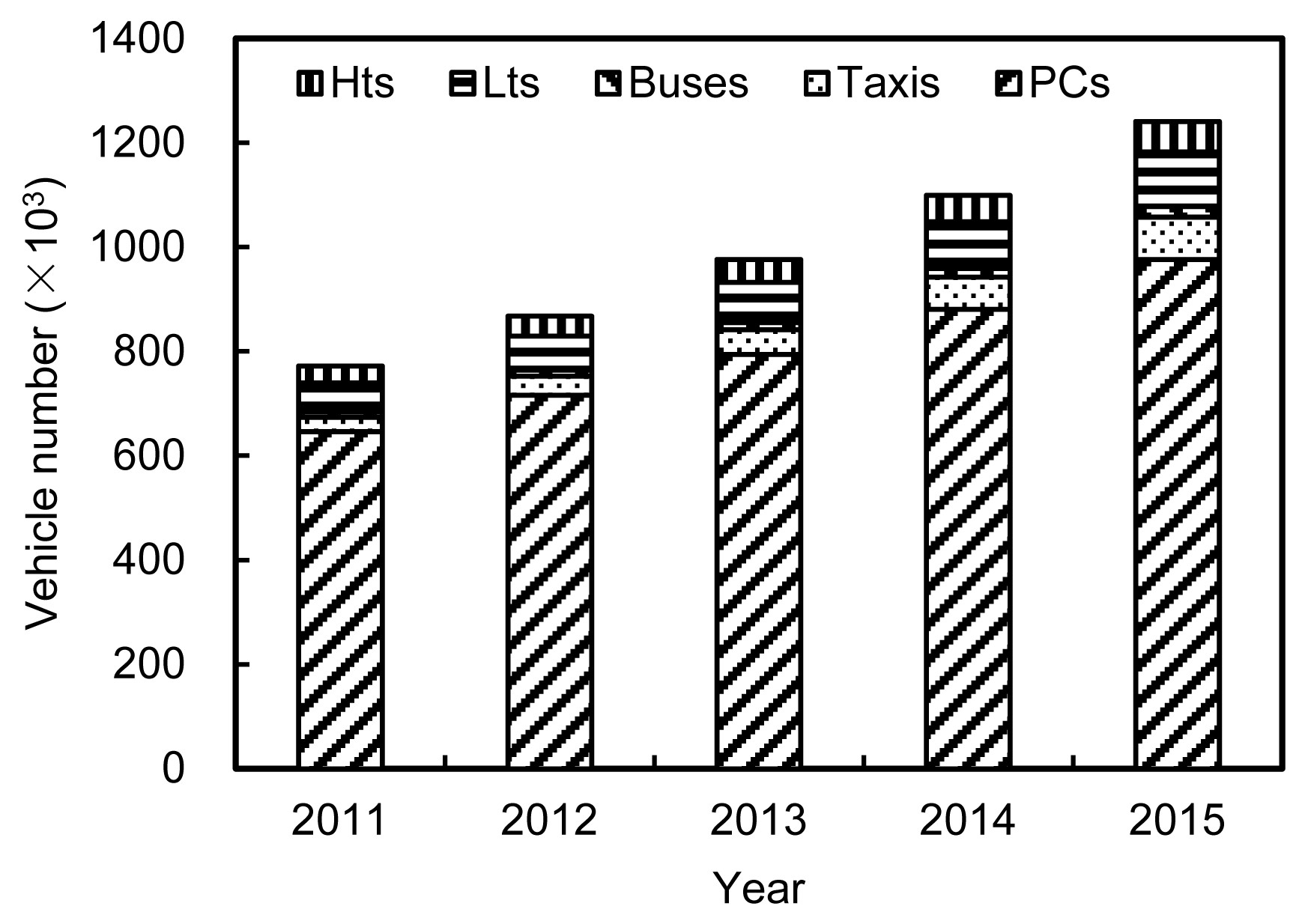 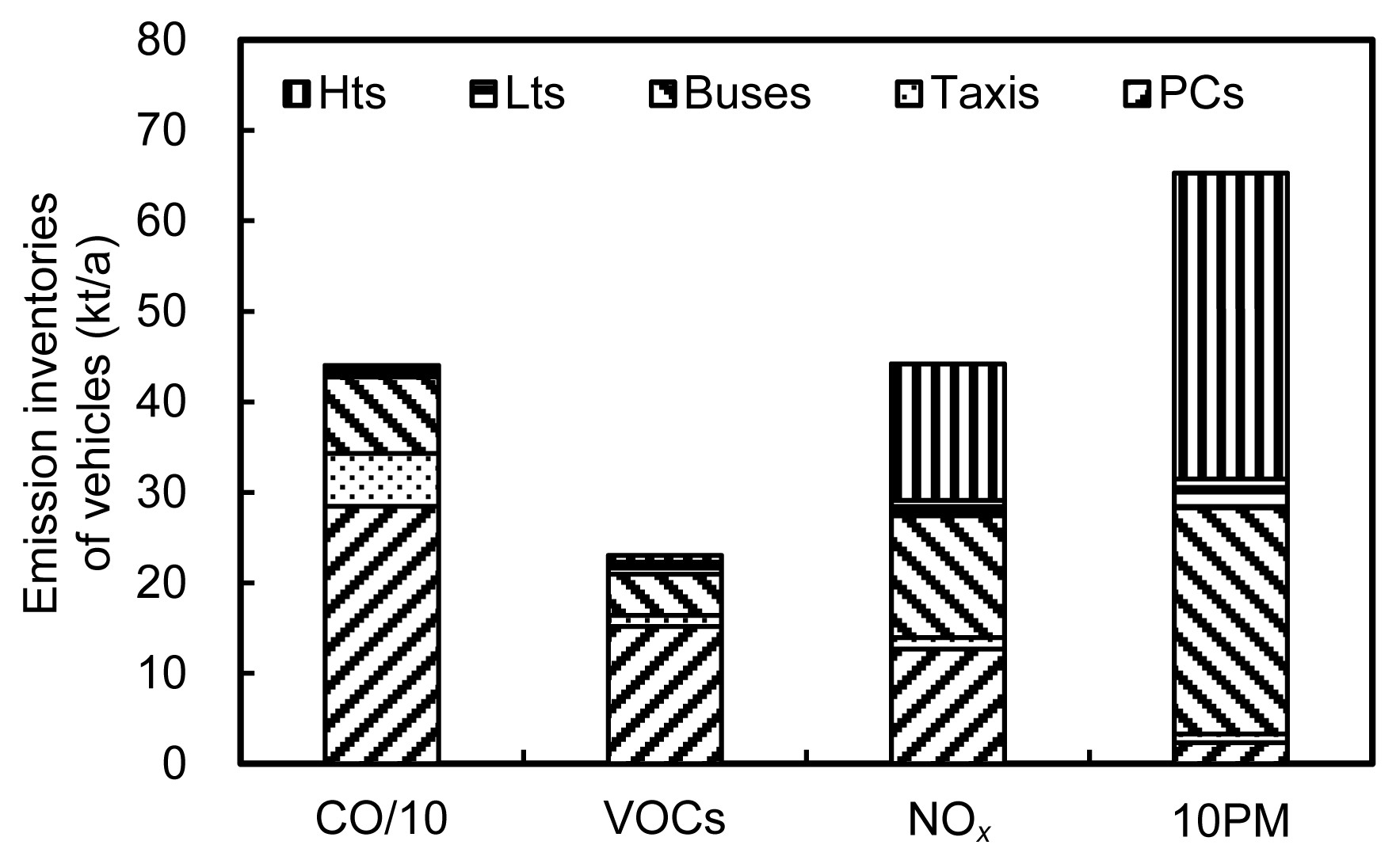 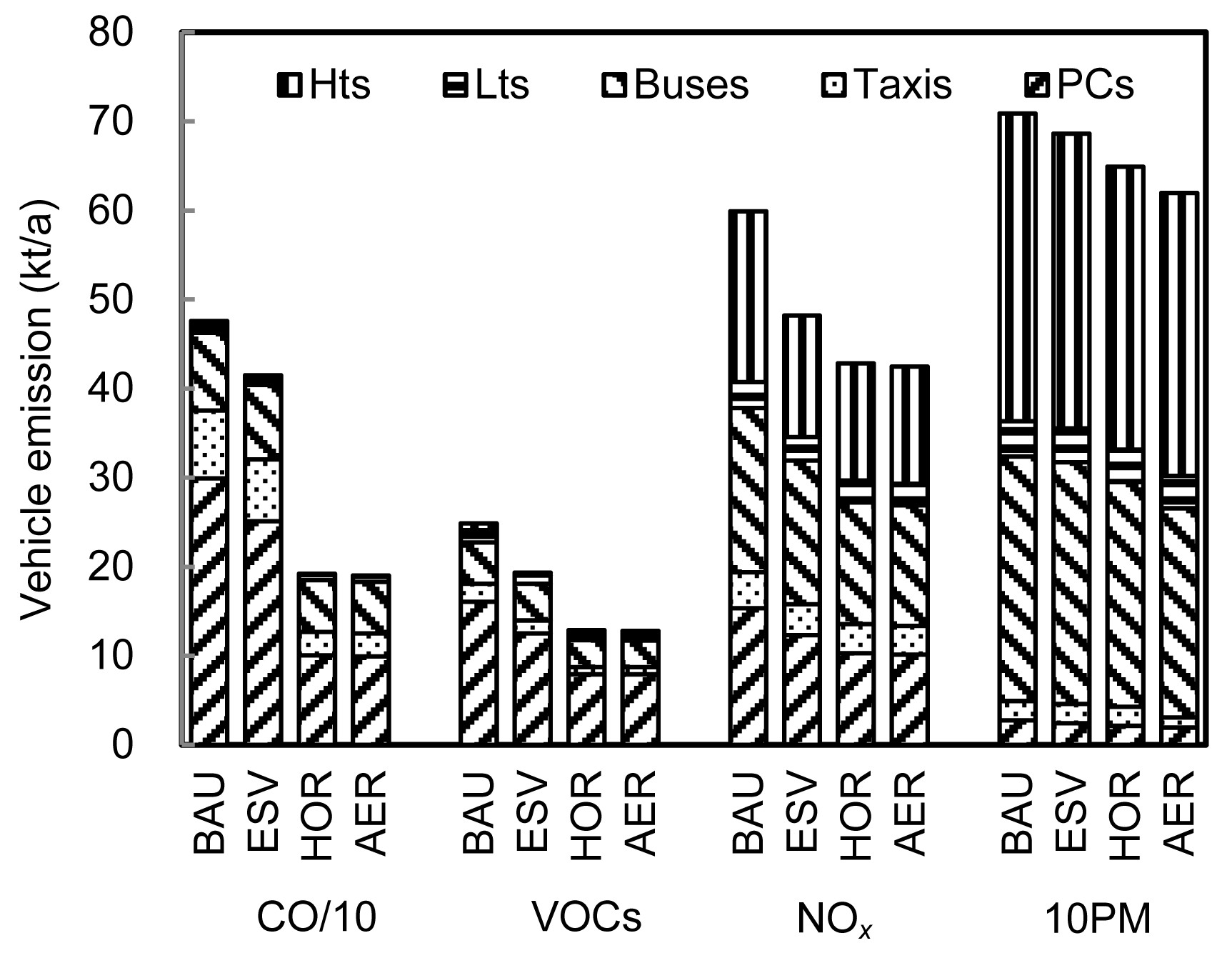 Fig.4
Predicated vehicle emission inventories of CO, VOCs, NO x , and PM under different scenarios in Hangzhou 2015 (estimated)
To assess the reduction potentials of abatement policy in each scenario, a summary of the vehicle emission and comparison with the baseline year are presented in Table 4.

Fig. 5 shows that a control policy cannot solely reduce vehicular emissions, because the emission abatement will be offset by a rapid increment of the vehicle population and vehicular deterioration, especially for NO x and PM. In 2015, it is estimated that upgraded vehicle emission standards and eliminating high emission vehicles all together (ESV scenario) will reduce about 5.78% CO and 16.26% VOCs, respectively. However, NO x and PM will still keep increasing when compared to 2010. Under the ESV scenario, improving fuel quality can further reduce all of the four pollutants by 56.34%, 44.22%, 3.24%, and 0.62% compared to 2010 for CO, VOCs, NO x , and PM, respectively. An integrated control policy, including upgrading vehicle emission standards, eliminating substandard vehicles, supplying Nation-IV fuel, and introducing alternative fuel vehicles (e.g., HEV, BEV, and CNG), will help to effectively reduce vehicle exhausts by 56.79%, 44.50%, 4.05%, and 5.14% compared to 2010 for CO, VOCs, NO x , and PM, respectively. It also can be concluded that eliminating high emission vehicles and supplying National-IV fuel are the most effective policies to reduce vehicle emissions, especially given the fact that CO and VOCs reduction potential is bigger than that of NO x and PM. Previous studies have also reported that alternative energy vehicles replacement can abate NO x and PM more effectively than CO and VOCs (Chae, 2010). 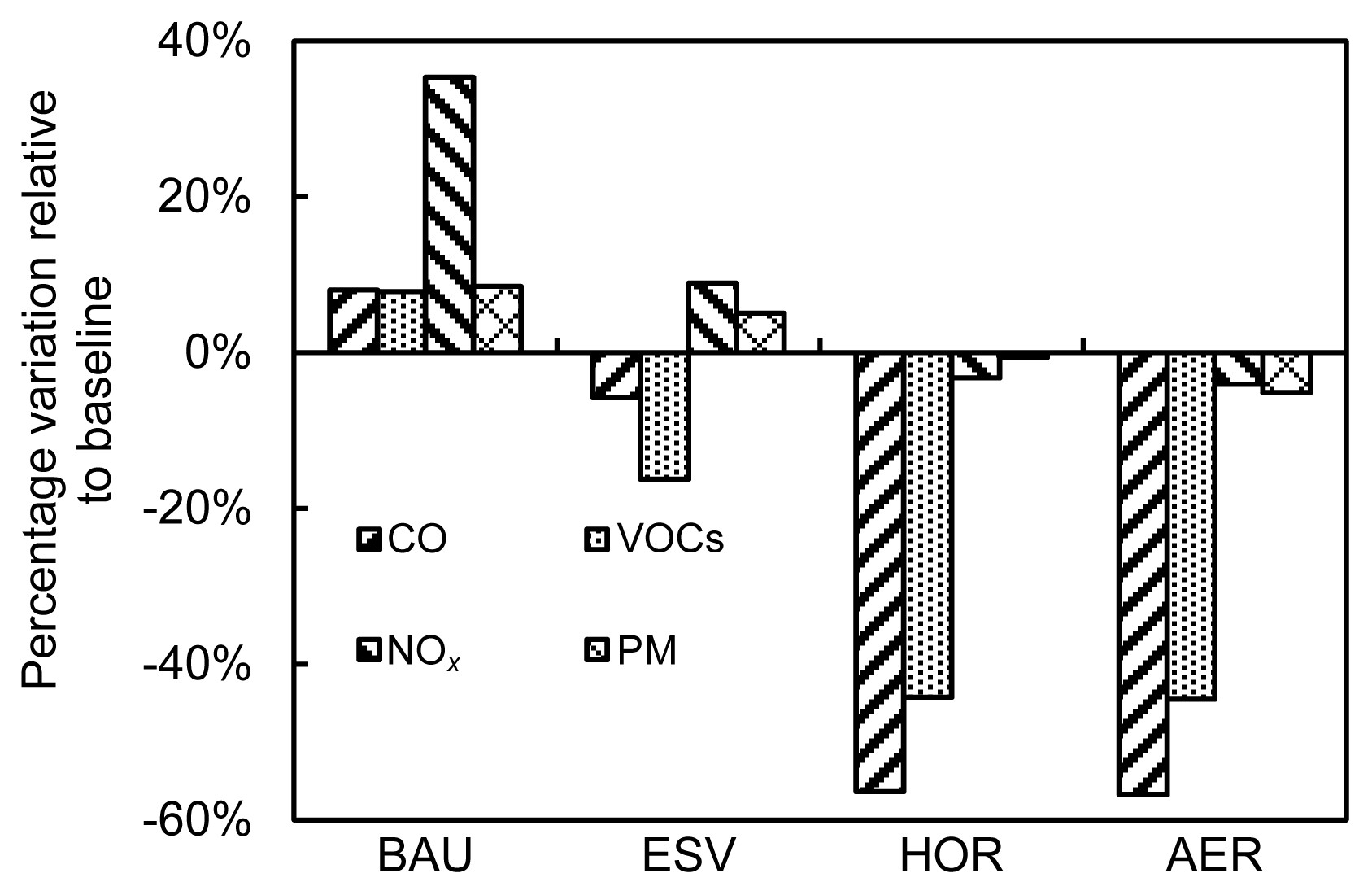 
*&nbspProject supported by the International S&T Corporation Program of the Science and Technology Ministry of China (Nos. S2012GR0080 and 2011B13), and the Scientific Environmental Protection Research Program of Zhejiang Province, China