In recent years, the rapid development of high-speed railways in China has surprised the world with the so-called “China speed”. The total mileage of high-speed railway will reach 1.6×104 km by 2020. As a result, “High-speed Railway Diplomacy” has become a national strategy. In the world, many countries are making their high-speed railway plans. The safety and comfort of high-speed trains raises the strict demands on the performance of the track-subgrade system during the service life over 100 years, for example, strict post-construction settlement at millimeter level, appropriate dynamic stiffness, and long-term durability. Under extreme climatic conditions such as heavy rainfall, persistent drought, and extreme low or high temperatures, long-term dynamic loading on the track-subgrade will cause many engineering problems, including excessive settlement, mud pumping, cracks in the slab, large voids under the slab, erosion of the reinforced concrete structure. Those engineering problems have been found in many operational high-speed railways. The research into the problems is still insufficient.

The research on the dynamic response of train-track-subgrade has made many achievements. Zhai et al. (2009; 2013a; 2013b) has established a robust 35-degree-of-freedom vehicle-track coupled dynamics model. Dynamic responses of the carriages can be analyzed by this model in the case of carriages passing over curved tracks. Much research on the dynamic response of the subgrade has been conducted using analytical methods (Metrikine, 2004), 3D dynamic finite element method (Hall, 2003), 2.5D finite element method (Bian et al., 2008), field monitoring (Mishra et al., 2012; Verbraken et al., 2012; Cui et al., 2014), and model tests (Chen et al., 2013; 2014a; 2014b). Those studies have shown that the track-subgrade vibration is significantly associated with the train speed. There exists a critical train speed close to the Rayleigh wave velocity of the track-subgrade (Bian et al., 2008). When the train speed is slower than the critical speed the vibration level increases almost linearly with the train speed. When the train speed equals the critical speed, the resonance of the track-subgrade causes a great increase in the vibration level. In practice, due to the high quality of fill material used in the subgrade construction, the critical speed is always higher than the train speed. Hence, the resonance can hardly be observed through field monitoring and model tests. 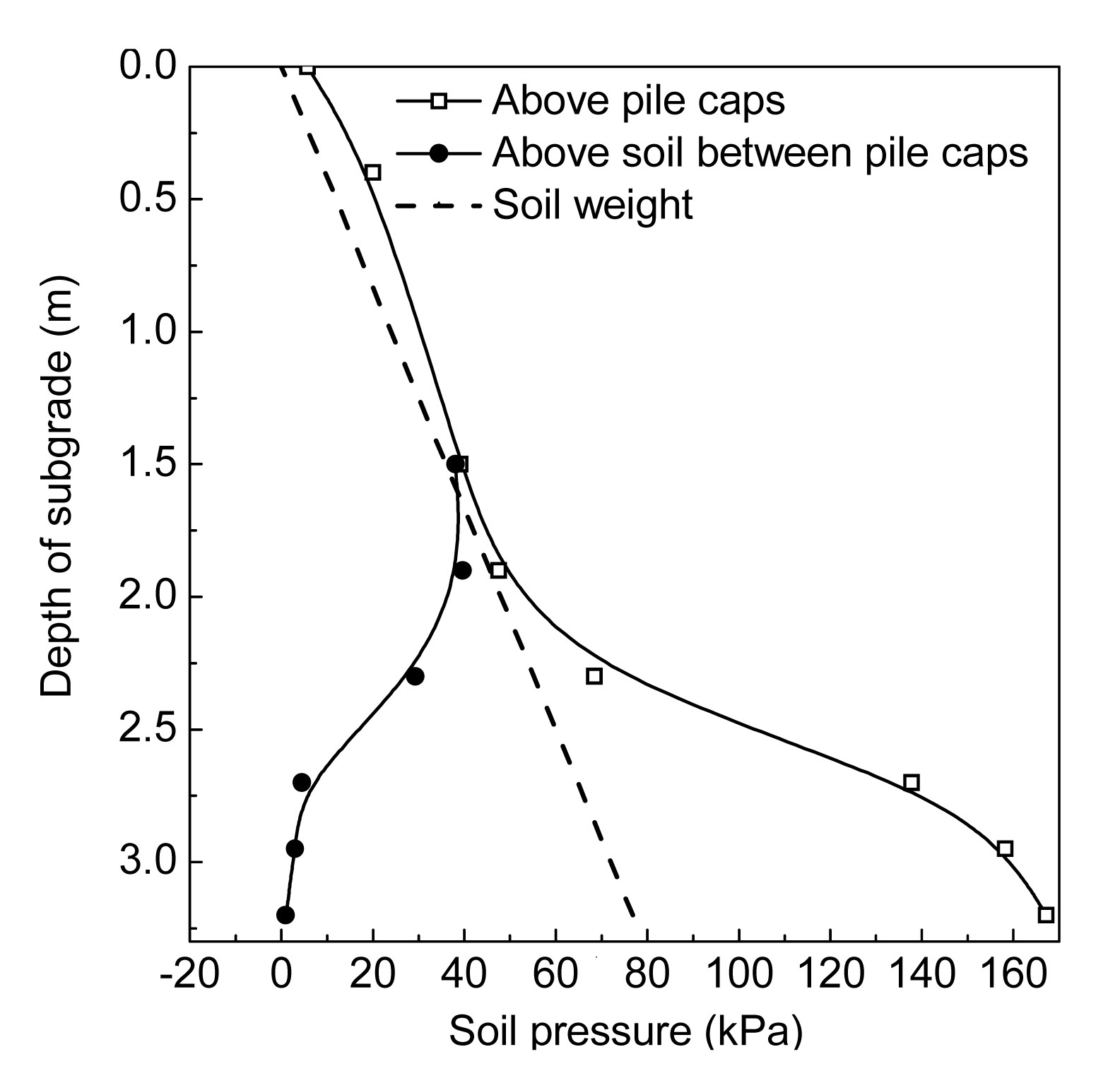 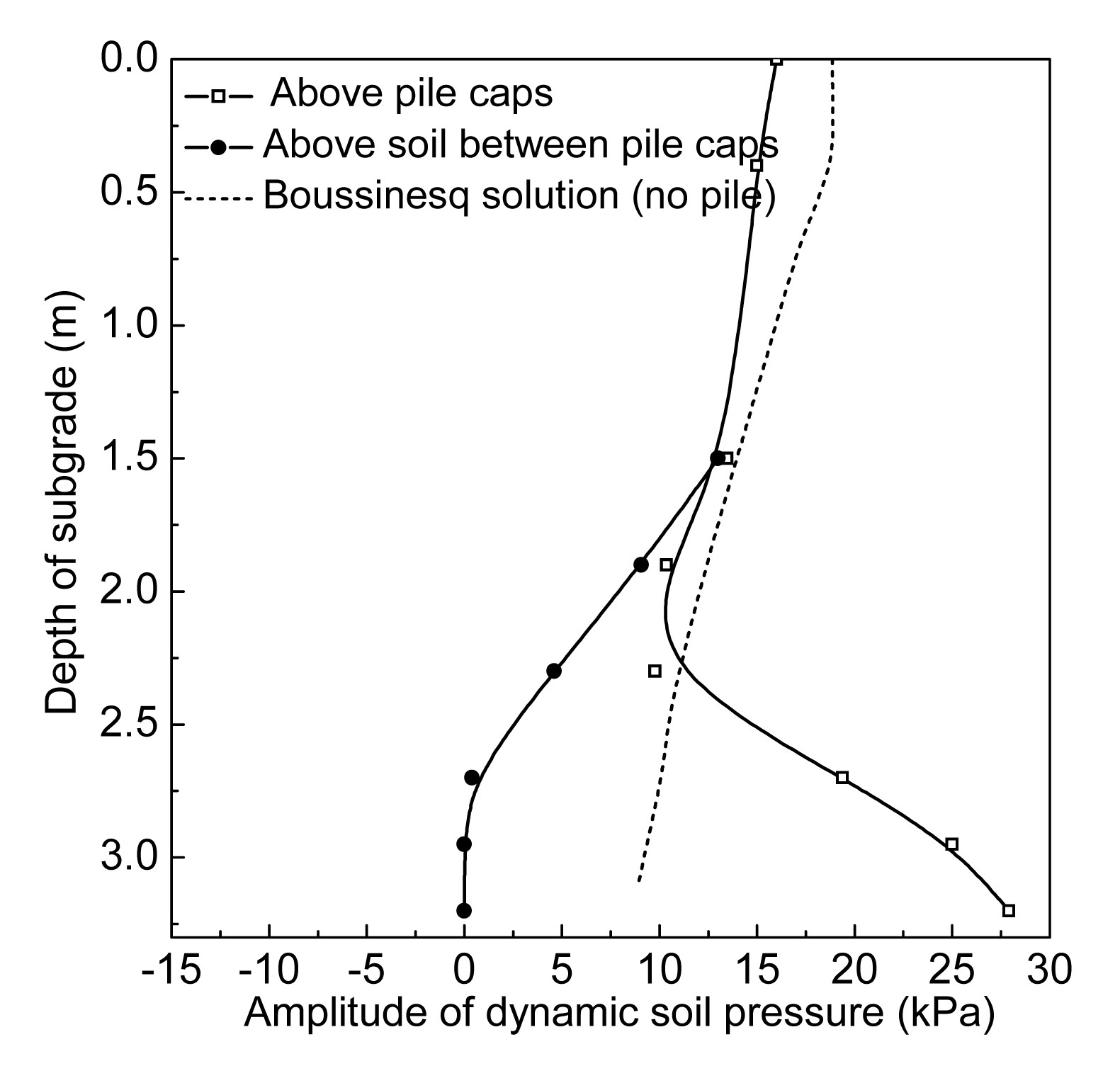 Future research will focus on the ground and structure vibration due to the train passing, and protection methods will be studied for vibration sensitive structures. Studies on certain kinds of railway sections, such as the inhomogeneous soil profile in longitudinal and lateral directions, and transition sections, should be proposed.

3.  Post-construction settlement of the track-subgrade

Although some approaches have been developed to calculate the accumulative settlement, the accuracy of those approaches is low. This is mainly due to the very small accumulative settlement and the uncertainties of the soil parameters. Hence, it is better to propose some threshold values related to the dynamic soil stress to control the development of the accumulative settlement. Further studies should focus on the influence factors on the threshold values, such as saturation, compaction coefficient, gradation, etc. Discrete element method (DEM) and computer tomography (CT) are two useful measures to study the behavior of the subgrade. With the use of pile supported low embankment in soft soil area, pile settlement in the dynamic and static load combinations has become an important part of subgrade settlement. Currently research in this area is not sufficient, high-speed rail design specification shave no clear rules and calculation methods.

During the service life of high-speed railways, the track-subgrade will suffer drying-wetting cycles, dynamic stress cycles and temperature cycles. For example, the variation of temperature in north China will be 60 °C. Nurmikolu (2012) thought it was crucial to understand and take into account the frost action mechanism in cold climate, especially where seasonal frost occurs. The water content in the subgrade will also change greatly from the optimum water content during the construction to the saturation status during the wet season. The change of the water content in the subgrade has a significant impact on the subgrade settlement (Fig. 3, Chen et al., 2014a). Future research tendencies will concentrate on the following aspects: (1) the soil-water characteristic curve and permeability of coarse grained subgrades; (2) the water movement in the subgrade under heavy rainfall. Then, the engineering parameters of the high-speed railway subgrade will be proposed, and advice about fine particles content, grading, and structural design will also be given.

[16] Nurmikolu, A., 2012. Key aspects on the behaviour of the ballast and substructure of a modern railway track: research-based practical observations in Finland. Journal of Zhejiang University-SCIENCE A (Applied Physics & Engineering), 13(11):825-835.