Colorectal cancer (CRC) is a leading cause of cancer deaths worldwide (Siegel et al., 2014). In recent years, advances in surgical management and chemotherapy have prolonged the overall survival rate of CRC patients; however, the prognosis of advanced and recurrent CRC remains poor. Thus, CRC biology should be further explored to improve the current treatment methods or develop new approaches.

5-Fluorouracil (5-FU; Sigma-Aldrich, USA) was suspended in DMSO to obtain 250 mmol/L stock concentration, which was then stored at −20 °C and diluted in cell medium or phosphate buffered saline (PBS) for in vitro or in vivo assay, respectively.

Recombinant human PDGF-BB (PeproTech, USA) was dissolved in sterilized water that contained 0.1% bovine serum albumin to obtain 1 μg/μl stock solution, which was then stored at −80 °C.

The freshly dissected colon cancer tissue specimens were extensively washed, minced, and incubated in 1 mg/ml collagenase type I and 1 mg/ml hyaluronidase (Sigma-Aldrich, USA) for 2 h at 37 °C. The cells were separated by centrifugation and re-suspended in Iscove’s modified Dulbecco’s medium (Invitrogen, USA) supplemented with penicillin-streptomycin and 10% fetal bovine serum (FBS; Invitrogen, USA). Early passages of the three colonic fibroblasts (F-1, F-2, and F-3) were used in the following experiments (passage 15 for all experiments).

Cell cycle was analyzed by flow cytometry. Subconfluent cultures (24 h) of sunitinib-treated colonic fibroblasts (1 or 8 μmol/L) were trypsinized, washed with PBS, fixed in 70% ethanol, and stained with propidium iodide (50 μg/ml) in the presence of MgCl2 (5 mmol/L) and RNase A (10 μg/ml) in Tris-HCl (pH 7.5; 10 mmol/L). DNA content was determined using a FACSCalibur flow cytometer (Becton, Dickinson and Company, USA) with Modfit software.

Cell proliferation assays were performed by using CellTiter 96 Aqueous One Solution Cell Proliferation Assay that contained MTS (Promega Corporation, USA). Each well of the 96-well plates was seeded with 2000–3000 colonic fibroblasts or 3000 SW620 cells in a culture medium that contained 10% FBS. The cells were treated with different concentrations of 5-FU or sunitinib after overnight culture. MTS was added to the cells in accordance with the protocol of the supplier 72 h after the treatments. Absorbance was then measured at 490 nm using an automated enzyme-linked immunosorbent assay (ELISA) plate reader.

The medium in the overnight cultured cells in the 96-well plates was replaced by a serum-free medium that contained PDGF-BB (10 ng/ml) and various sunitinib concentrations to evaluate the effects of growth factors PDGF-BB and tyrosine kinase inhibitor sunitinib on the colonic fibroblast growth. MTS assay was conducted 72 h after treatment.

This study was approved by the Institutional Animal Ethical Committee of the Second Affiliated Hospital of Zhejiang University, China. Animal care was performed in accordance with the institutional guidelines.

Six-week-old male BALB/c athymic nude mice (SLAC Laboratory Animal Co. Ltd., Shanghai, China) were used for tumorigenesis assay. SW620 cells, (SW620+F-1) cells, or (SW620+F-2) cells (1×106 cells of each cell line) mixed in Matrigel matrix (BD Biosciences, USA) were injected subcutaneously into nude mice at random. Each group of mice was subdivided into control and treatment subgroups (n=6). Four days after injection, the mice were treated with a vehicle of sunitinib (40 mg/kg; oral route) or 5-FU (20 mg/kg; intraperitoneal injection) in a 5-d-on/2-d-off treatment cycle (5/2 schedule) based on the subgroup. The length (l) and width (w) of the tumor and body weight of the mice were measured with calipers twice a week. The tumor volume (V) was calculated as V=lw 2/2.

Tumors from both control and treatment groups were excised after 5 d, fixed with formalin, embedded in paraffin, and cut into serial 4-μm sections. Tissue sections were stained with antibodies to detect primary human colonic fibroblasts using anti-human vimentin, whereas tumor microvascular density (MVD) was determined using anti-mouse CD34. The sections were visualized using the EnVision Detection System (Dako, Glostrup, Denmark). Three tissue sections from each of the six mice in each group were evaluated. Tissue sections were examined under a light microscope to identify five regions with the highest MVD (100×), and then recorded to quantify tumor MVD (200×). Tissue sections were also examined (100×) to identify five regions with the highest vimentin-positive cells, and then recorded to quantify primary human colonic fibroblasts (400×). The results were then statistically analyzed.

The results were expressed as mean±standard error (SE). The differences between each group, such as cellular growth rate, were analyzed by paired Student’s t-test and based on the mouse body weight. Quantifications of the Western-blot results, tumor volumes, CD34+ areas, and vimentin-positive cells were analyzed using one-way analysis of variance (ANOVA) or non-parametric test. P<0.05 was considered as statistically significant.

3.1.  Effects of sunitinib and 5-FU on the growth of SW620 cells and human colonic fibroblasts 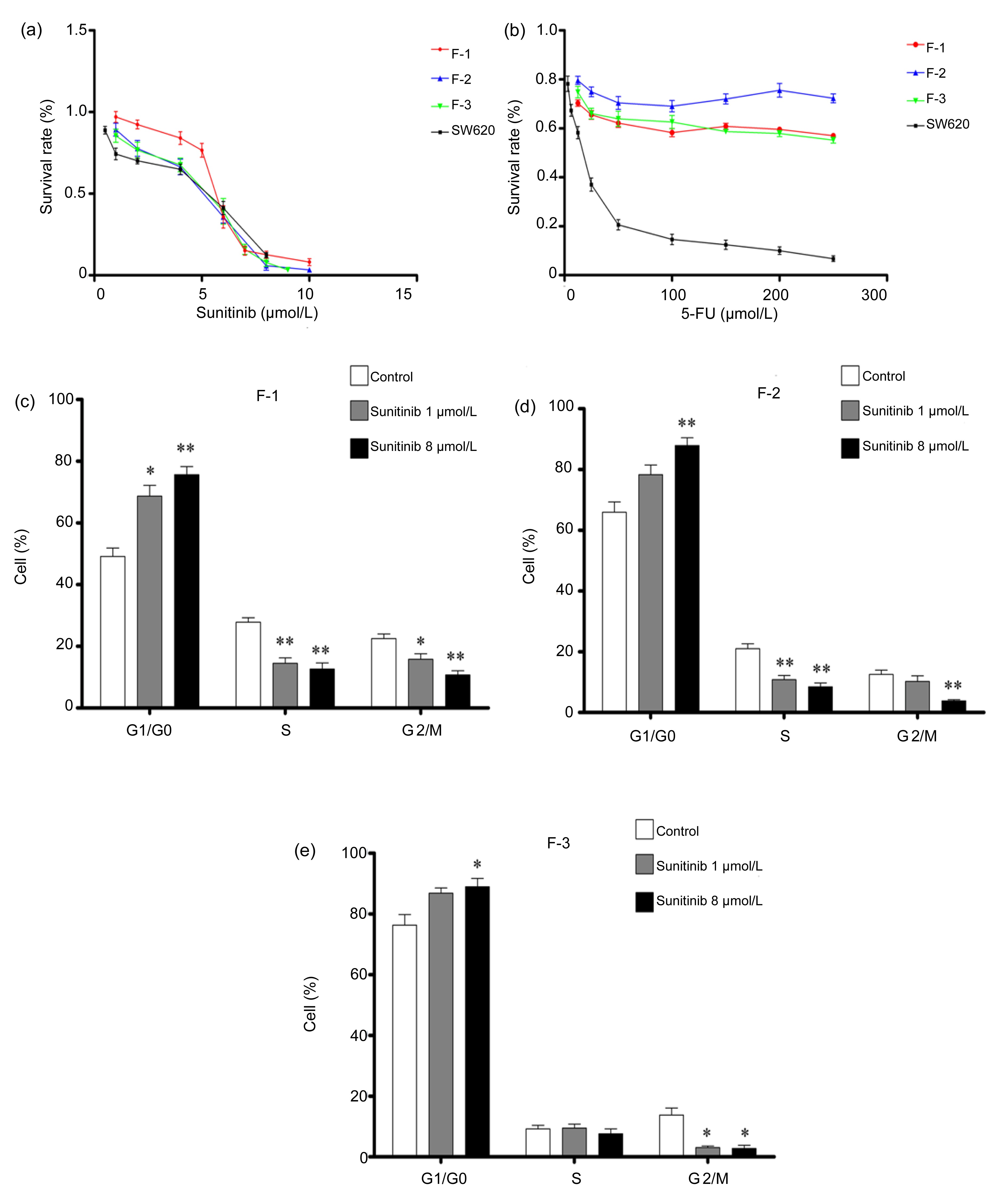 Cell cycle analysis (24 h) of 1 or 8 μmol/L sunitinib-treated colonic fibroblasts was performed via flow cytometry to evaluate the inhibitory effect of sunitinib against colonic fibroblast proliferation. The result indicates a dose-dependent decrease in S and G2/M phases as well as an accumulation of cells in the G0/G1 phase. No significant cell apoptosis was detected even at 8 μmol/L sunitinib (Figs. 1c–1e).

3.3.  Expression levels of PDGFR-α and PDGFR-β in SW620 cells and human colonic fibroblasts 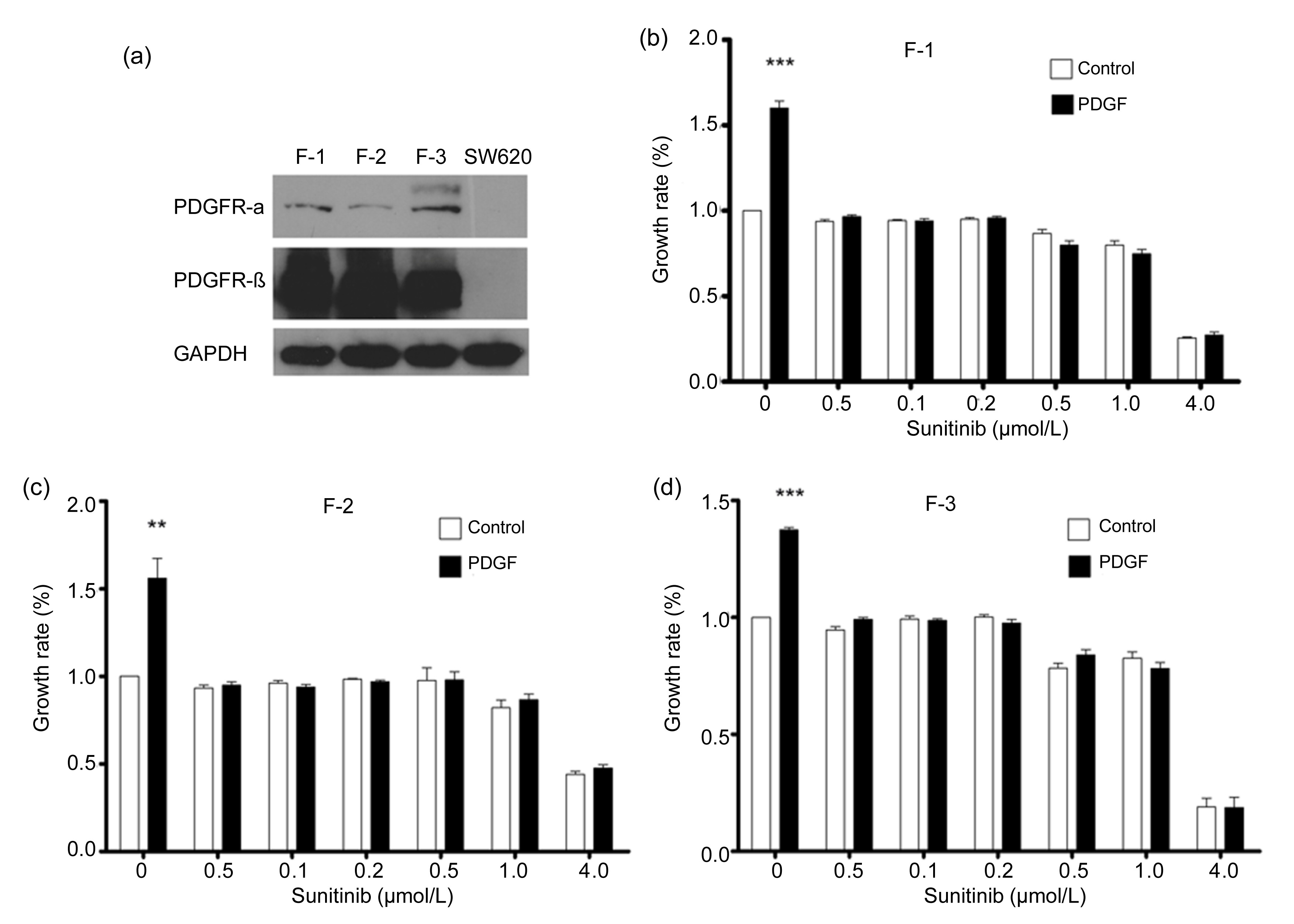 The total levels of phosphorylated PDGFR-β, Akt, and ERK proteins in colonic fibroblasts treated with PDGF and/or sunitinib were examined to investigate the mechanisms by which sunitinib inhibits PDGF-induced colonic fibroblast proliferation. The total protein levels of PDGFR-β, Akt, and ERK1/2 in all three colonic fibroblasts were not significantly changed; however, stimulation by 10 ng/ml PDGF-BB alone significantly increased the phosphorylated levels of the aforementioned proteins. Meanwhile, pretreatment with sunitinib at various concentrations (0.05, 0.10, 0.20, 0.50, and 1.00 μmol/L) suppressed the PDGF-stimulated phosphorylation in a dose-dependent manner (Fig. 3). Fold changes in phosphorylated protein (RR:) between the treatment and the control groups were determined by three independent experiments and normalized by the total protein level. 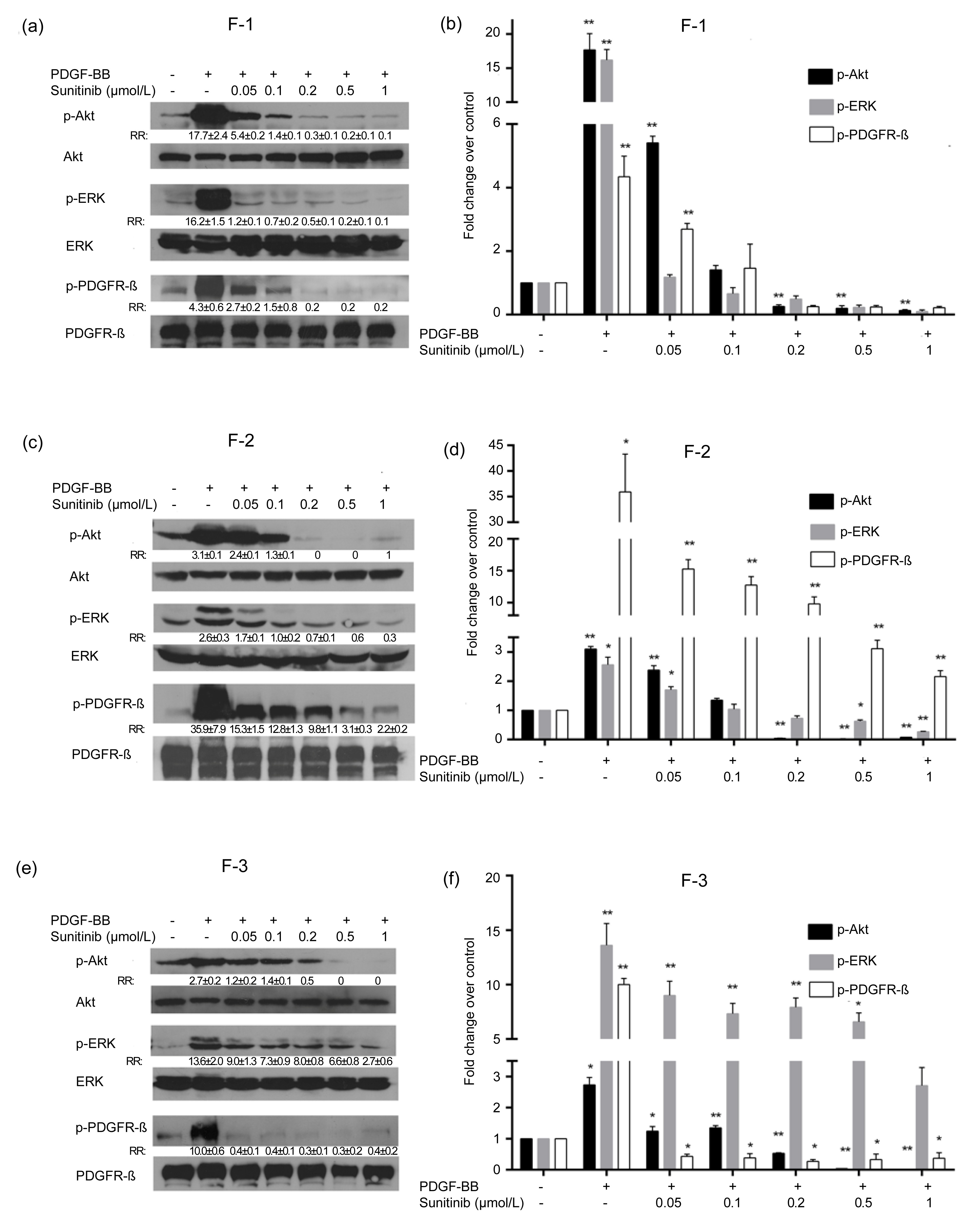 Fig.3
Inhibition of PDGF-BB-induced PDGFR-β signaling in human colonic fibroblasts by sunitinib
The stimulation induced by 10 ng/ml PDGF-BB increased the amounts of phosphorylated PDGFR-β, Akt, and ERK proteins in colonic fibroblasts F-1 (a, b), F-2 (c, d), and F-3 (e, f). Pretreatment with various sunitinib concentrations suppressed the phosphorylated levels of the aforementioned proteins in a dose-dependent manner. Fold changes in phosphorylated protein (RR:) between the treatment and the control groups were determined by three independent experiments and normalized by the total protein level. Data are presented as mean±SE. * P<0.05, ** P<0.01, vs. control

3.6.  Effect of sunitinib on tumor growth in mice xenograft models

We developed a mouse xenograft model that bore subcutaneous SW620 cells and colonic fibroblasts to determine the contribution of colonic fibroblasts to tumor growth and the effect of sunitinib in vivo. SW620 cells or SW620 cells mixed with F-1 cells (SW620+F-1) or F-2 cells (SW620+F-2) in a 1:1 ratio were inoculated subcutaneously into immunocompromised nude mice to develop the mouse xenograft model. Each group was divided into three subgroups administered with a vehicle, sunitinib, or 5-FU. F-3 cells were not included in the in vivo tests because the life span is too short to obtain sufficient numbers of cells. 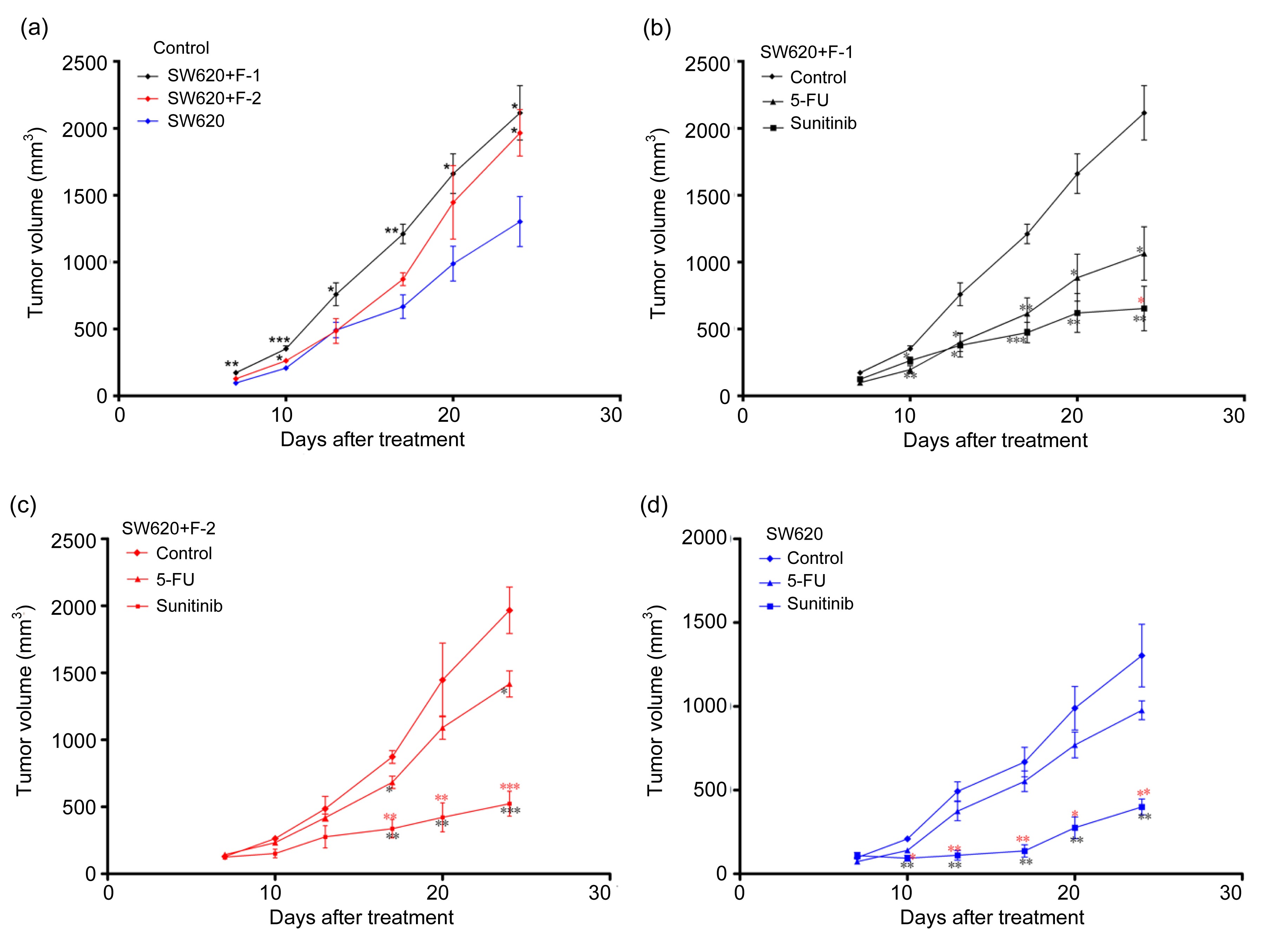 Fig.4
Tumor volumes of the mice injected with SW620, SW620+F-1, or SW620+F-2 cells under different treatments
Each group was divided into the following subgroups: control, sunitinib, and 5-FU. (a) SW620 cells mixed with either F-1 or F-2 cells generated greater tumor volumes compared with those from SW620 cells alone. (b, c) In the SW620+F-1 and SW620+F-2 groups, both sunitinib and 5-FU significantly inhibited tumor growth; however, sunitinib more effectively inhibited tumor growth than 5-FU. (d) In the SW620 cell group, sunitinib significantly inhibited tumor growth compared with 5-FU and the control. Data are presented as mean±SE (n=6). * P<0.05, ** P<0.01, *** P<0.001; the black * indicates comparison of the treatment subgroup with the control subgroup; the red * denotes comparison of sunitinib with 5-FU
The side-effects of sunitinib and 5-FU were also evaluated based on the in vivo assay. No mouse died in any of the groups. In each group, the average body weights of the mice in the sunitinib or 5-FU subgroups were not significantly different from those of the mice in the control subgroups (Table 1). 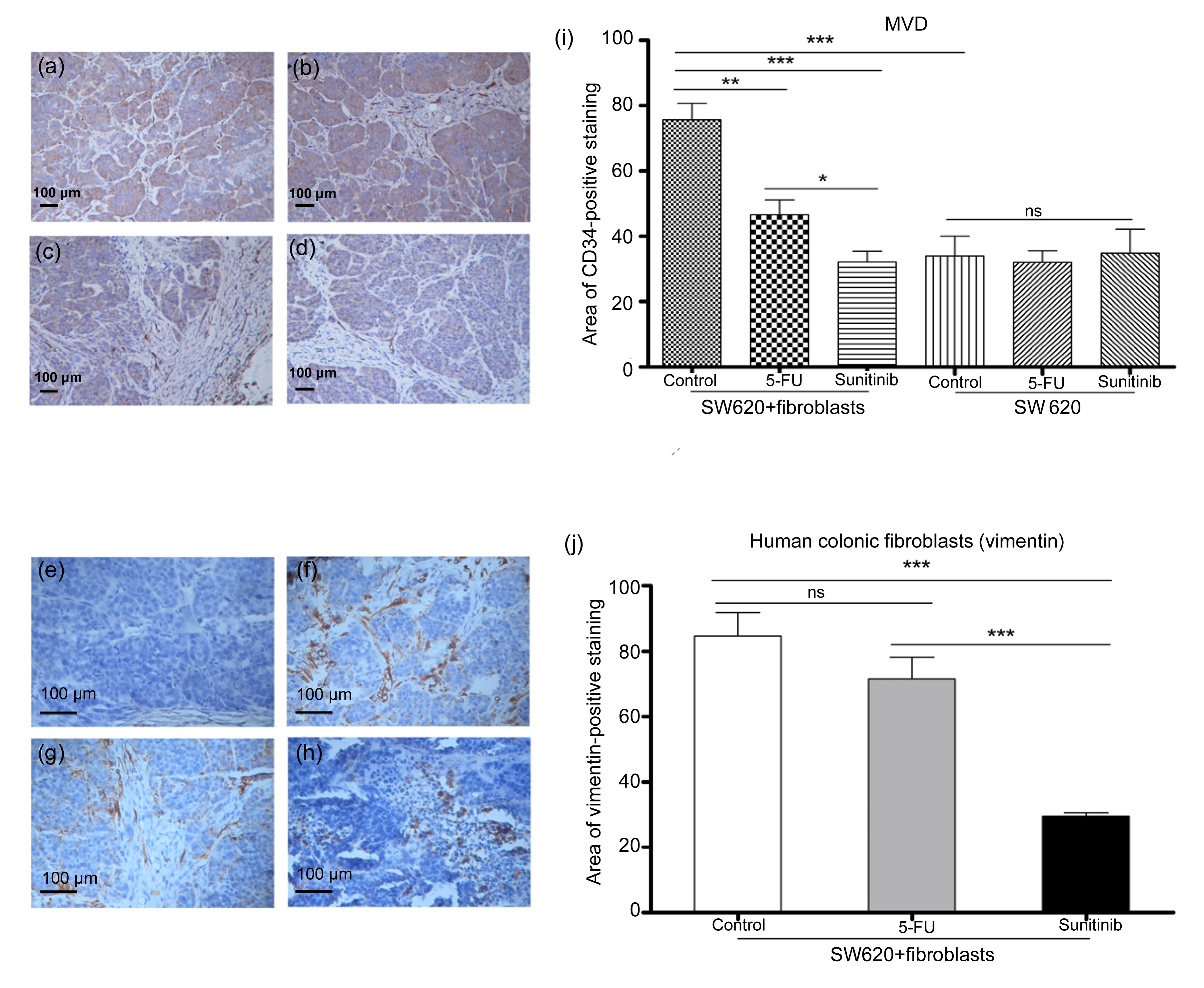 Cancer progression is increasingly recognized as being dependent not only on the cancer cells themselves, but also on stromal fibroblasts in cancer microenvironments (Mueller et al., 2007b; Cui et al., 2010; Henriksson et al., 2011; Tyan et al., 2011; Zhang et al., 2011). Stromal fibroblasts modulate tumorigenic activities of cancer cells, such as proliferation, apoptosis, and angiogenesis (Tomasek et al., 2002; Kalluri, 2003; Micke and Ostman, 2005). Therefore, it is necessary to determine the specific interaction between cancer cells and stromal fibroblasts. Continuous cell line growth may exhibit differences in cell proliferation and protein expression; thus, performing experiments during early passage is important. In the present study, we used three low-passage primary human colonic fibroblasts (F-1, F-2, and F-3) cultured from an excised tissue specimen of colon cancer. Similar experiments were performed on these low-passage colonic fibroblasts to determine their common features. However, primary cells have a short life-span, thereby limiting the experimental repeatability. In the present study, the three primary colonic fibroblasts had short life-spans. Although the life-span of F-3 cells was too short to obtain sufficient numbers of cells to conduct animal tests, the biological properties of the three colonic fibroblasts were extremely similar. Thus, the animal experiments on F-1 and F-2 cells may represent their common features.

Several studies have been carried out to target stromal fibroblasts using tyrosine kinase inhibitor, such as dasatinib or imatinib (Mueller et al., 2007a; Gioni et al., 2008; Haubeiss et al., 2010). Mueller et al. (2007a) showed that imatinib inhibits proliferation and modulates cytokine expression of human cancer-associated fibroblasts from colorectal metastases. However, the microenvironments of primary and metastatic lesions of colon cancer are dissimilar. Our results showed that the tyrosine kinase inhibitor sunitinib exhibits an inhibitory effect against human colonic fibroblasts from primary colon cancer both in vitro and in vivo.

Subsequently, we confirmed that PDGFR-α and PDGFR-β, which bind PDGF-BB, were expressed in the three primary fibroblasts. In addition, PDGF-BB stimulated colonic fibroblast proliferation in serum-free medium. Moreover, 50 nmol/L sunitinib inhibited PDGF-BB-mediated colonic fibroblast proliferation (Fig. 2). The dose-dependent inhibitory effects of sunitinib on the PDGF-BB-mediated phosphorylation of PDGFR-β, ERK1/2, and Akt pathways were demonstrated to elucidate the mechanisms of the inhibitory action of sunitinib (Fig. 3). PDGFR signaling pathways are important in stromagenesis and cancer progression, and thus, PDGFR signaling inhibition by sunitinib may be significant in tumor stromal targeted treatment. Given that sunitinib is a multi-target tyrosine kinase inhibitor, we investigated the effect of sunitinib on VEGFR, which is one of its important targets in primary fibroblasts. However, the Western-blot analysis indicated that none of the VEGFR signaling receptors, such as VEGFR1, VEGFR2, and VEGFR3, were expressed in these fibroblasts (data not shown).

In conclusion, we demonstrated that small molecular tyrosine kinase inhibitor sunitinib mesylate inhibited proliferation of primary human colonic fibroblasts from colon cancer in vitro and in vivo. Sunitinib-targeted treatment also inhibited PDGFR signaling of colonic fibroblasts by PDGF-BB stimulation. Our results indicate that sunitinib may be valuable in treating colon cancer by suppressing stromal fibroblasts. The effect of sunitinib on stromal response can augment current chemotherapy of colon cancer by establishing a synergistic approach.

We are grateful to Dr. Kan-lun XU, Dr. Xian ZHONG, Prof. Xun HU, and Prof. Rong-zhen XU for their assistance and suggestions.