1. A feasibility study of applying....2. Three-dimensional evaluation of upper....3. Association between mandibular....4. Evaluating the effect of midpalatal....5. Establishment of reference mandibular....6. Assessment of cortical bone....7. Assessment of volumetric bone mineral....8. A biomechanical case study on the....9. Human bone marrow-derived mesenchymal....

Esthetic outcome is becoming a more essential factor than functional restoration for patients with anterior dentition defect. The physiological remodelling of alveolar bone becomes very active and complex after tooth extraction. Generally, concurrent with new bone growth into the extraction socket, there is also resorption of the alveolar bone. Many studies have demonstrated that the height and especially the width of the alveolar bone decrease significantly after tooth extraction (Lam, 1960; Pietrokovski and Massler, 1967; Johnson, 1969; Jahangiri et al., 1998; Schropp et al., 2003; Araujo and Lindhe, 2005; Kerr et al., 2008; van der Weijden et al., 2009), leading to insufficient bone volume at the implant site.

Cone-beam computed tomography (CBCT) is a new technique with advantages of rapid scan speed, high resolution, low effective radiation dose (Cohnen et al., 2002; Ngan et al., 2003; Schulze et al., 2004), and high radiation efficiency. It is ideal for clinical applications (Hatcher et al., 2003; Vannier, 2003). It reduces the slice thickness of each image to tens of micrometers, which is indispensable for precisely observing the fine structure of the oral and maxillofacial region (Loubele et al., 2007). CBCT generates volumetric data via scanning. Various flat or curved planes, on which quantitative measurements are made, can be easily accessed by image reconstruction. Although CBCT has many advantages, there are few studies using CBCT to measure horizontal and vertical bone resorption following tooth extraction. In this study, we use CBCT to observe contour changes of human alveolar bone in the esthetic area of maxillary central incisor, and provide original morphological evidence for esthetic implant treatment.

Forty patients (20 males and 20 females), with ages between 20 and 63 years old, were recruited from people who needed an extraction of the maxillary central incisor and who wanted to restore the dentition defect with a dental implant.

The inclusion criteria were: (1) The patients had a maxillary central incisor to be extracted because of injury or endodontic or periapical disease. Each patient had two CBCT scans. One was taken an hour before tooth extraction, and the other was taken three months after extraction. (2) All extraction and examinations were performed by one clinician. Two clinical examinations at the time of tooth extraction and three months after tooth extraction showed normal plaque index, bleeding index, and probing depth of the patients. (3) Adjacent teeth to the test tooth T received no treatment in the interval between two CBCT scans. On two CBCT scans, at least two-thirds of the roots of the adjacent teeth were surrounded by bone.

The procedure of extraction of the maxillary central incisor was carried out as follows: patients were anesthetized with local infiltration of 2% (0.02 g/ml) lidocaine which contained epinephrine at 1:100 000 (v/v). Dental elevators and forceps were used to carefully extract the teeth without any flap elevation. Granulation tissues were removed by curettes. Extraction sockets were examined with a periodontal probe. Patients were prescribed mouth rinses postoperatively with 0.2% (2 g/L) chlorhexidine, twice per day. Oral analgesics with ibuprofen 800 mg t.i.d. was administered as needed.

The first CBCT the patient received was referred to as CBCT I, and the second CBCT II. The maxillary central incisor, which was to be extracted in CBCT I and was extracted in CBCT II, was referred to as test tooth T. On any CBCT I axial slice that was in the middle third section of the root of the lateral incisor, sagittal slices were reconstructed to measure its root length (Fig. 1). The root apex of the lateral incisor next to T was used to orient the starting axial slice Ax R on the two CBCT scans (Fig. 2). 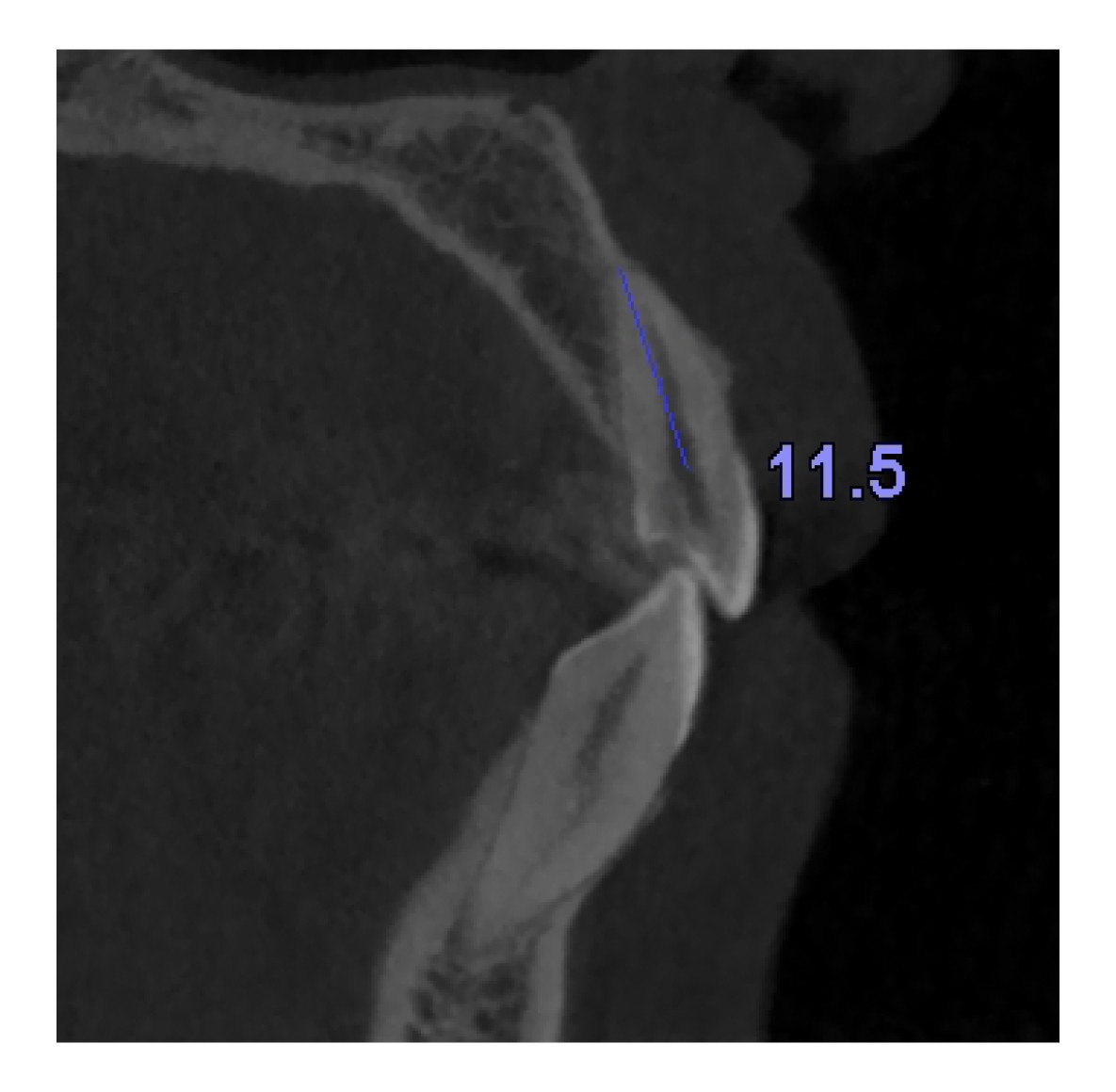 Fig.1
Tooth length of lateral incisor in CBCT I 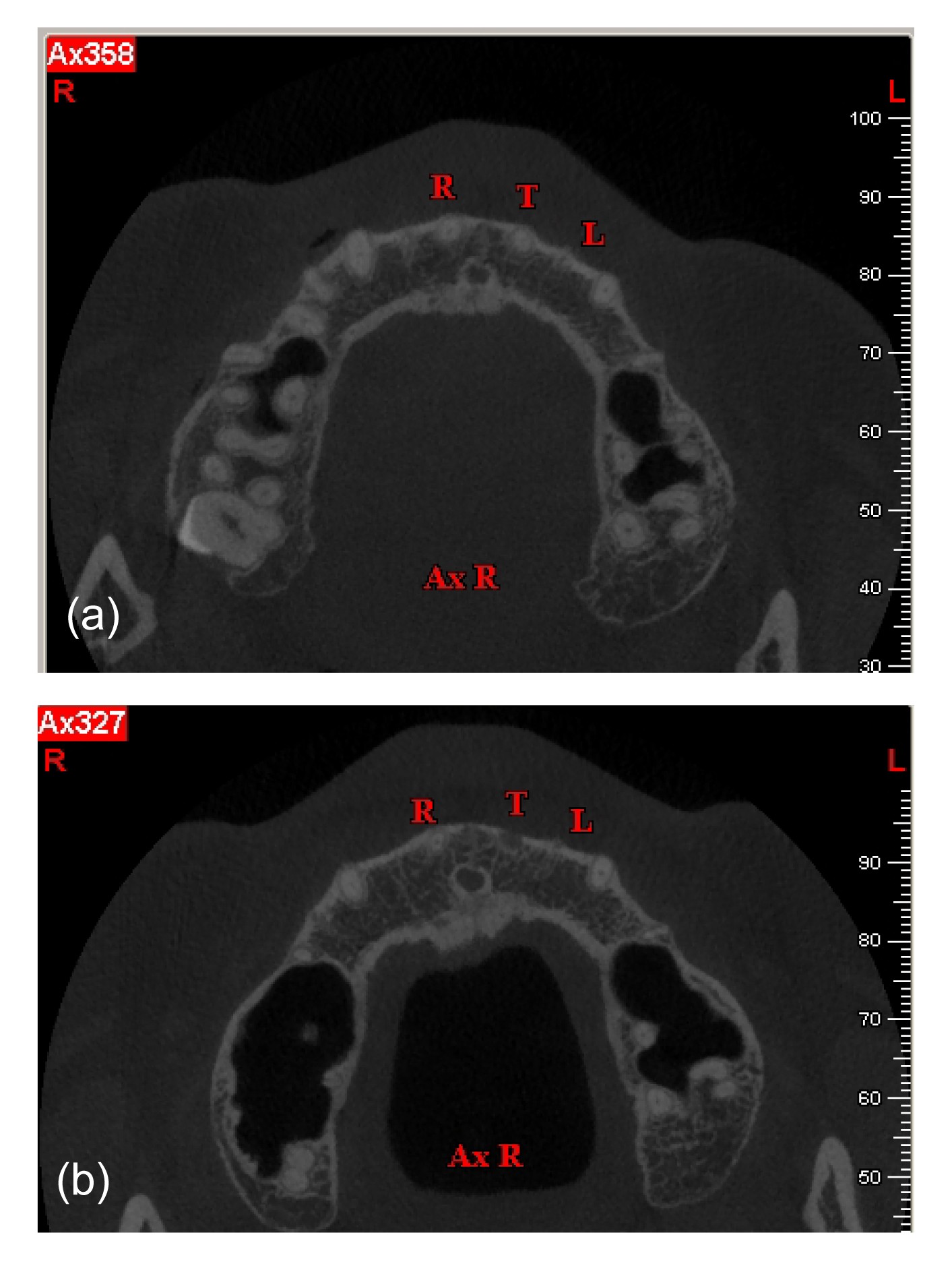 Fig.3
Labial and palatal alveolar bone widths of T at Cx T-20 on Ax20 (a), Cx T-50 on Ax50 (b), and Cx T-70 on Ax70 (c) in CBCT I
On sagittal slice Cx T-50, a line was drawn between two spines to set the palatal plane. The distal spine was abbreviated to D. The apices of the labial and palatal alveolar ridges were designated A and B. Perpendiculars to the palate plane passing through A and B were drawn. The intersection points were named L and P. Distances of AL, BP, DL, and DP were measured (Fig. 4). The sagittal slice that passed through the pulp centre of the opposite central incisor on Ax50 was designated Cx F. The number of sagittal slices from Cx R to Cx F was recorded as N2. Alveolar bone width and tooth length of the opposite central incisor were measured on Ax50 and Cx F (Figs. 5 and 6). 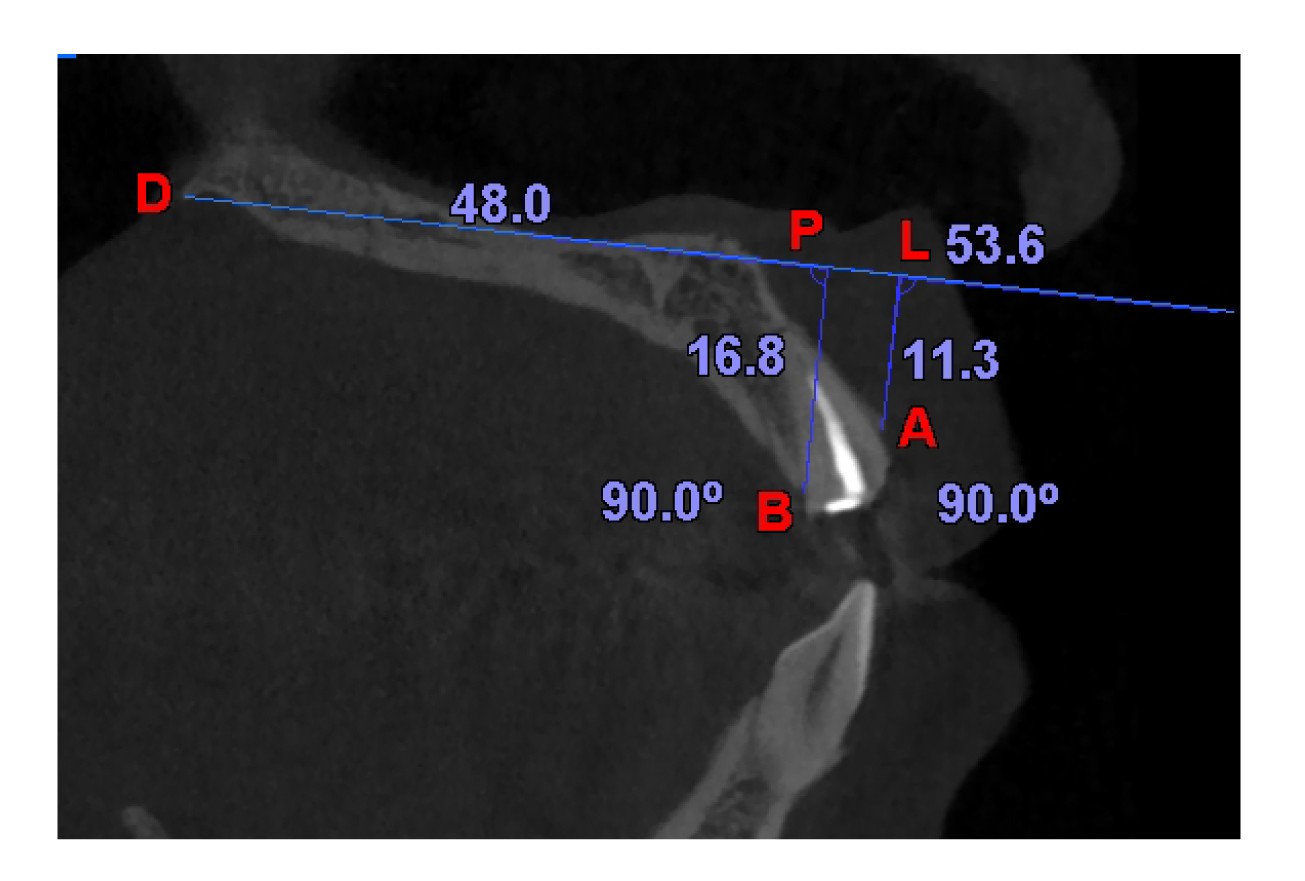 Fig.4
Relevant distances of T on Cx T-50 in CBCT I 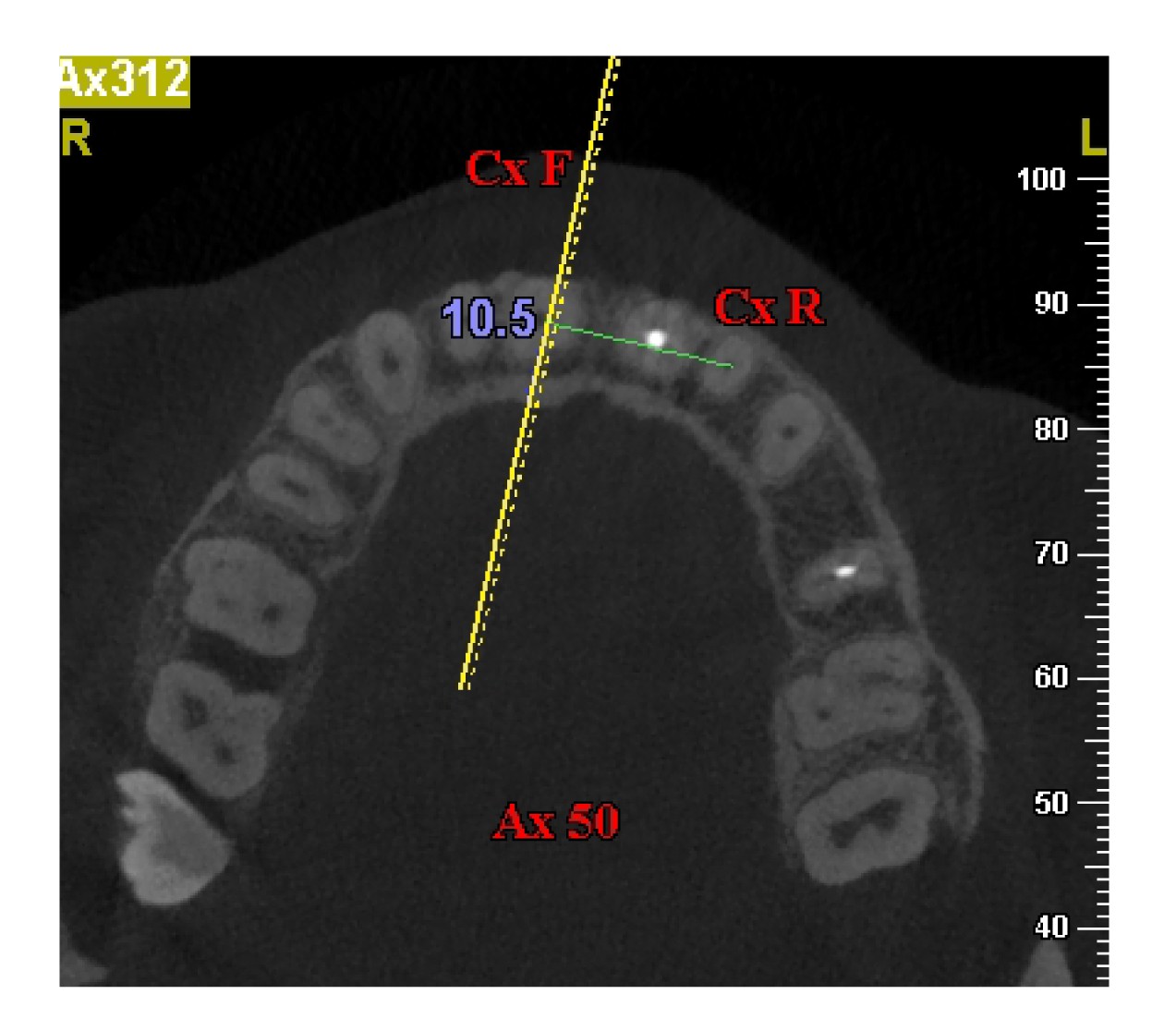 Fig.5
Alveolar bone width of the opposite central incisor at Cx F on Ax50 in CBCT I

Fig.6
Tooth length of the opposite central incisor on Cx F in CBCT I
Among CBCT II slice series, the slice was first oriented to Ax R (Fig. 2b). On CBCT II Ax20, Ax50, and Ax70, sagittal slices were reconstructed as in CBCT I. The same numbers of sagittal slices N1-20, N1-50, and N1-70 were taken from Cx R to orient extracted T, respectively. Labial and palatal alveolar bone widths of T were measured at the oriented sites on Ax20, Ax50, and Ax70 (Fig. 7). 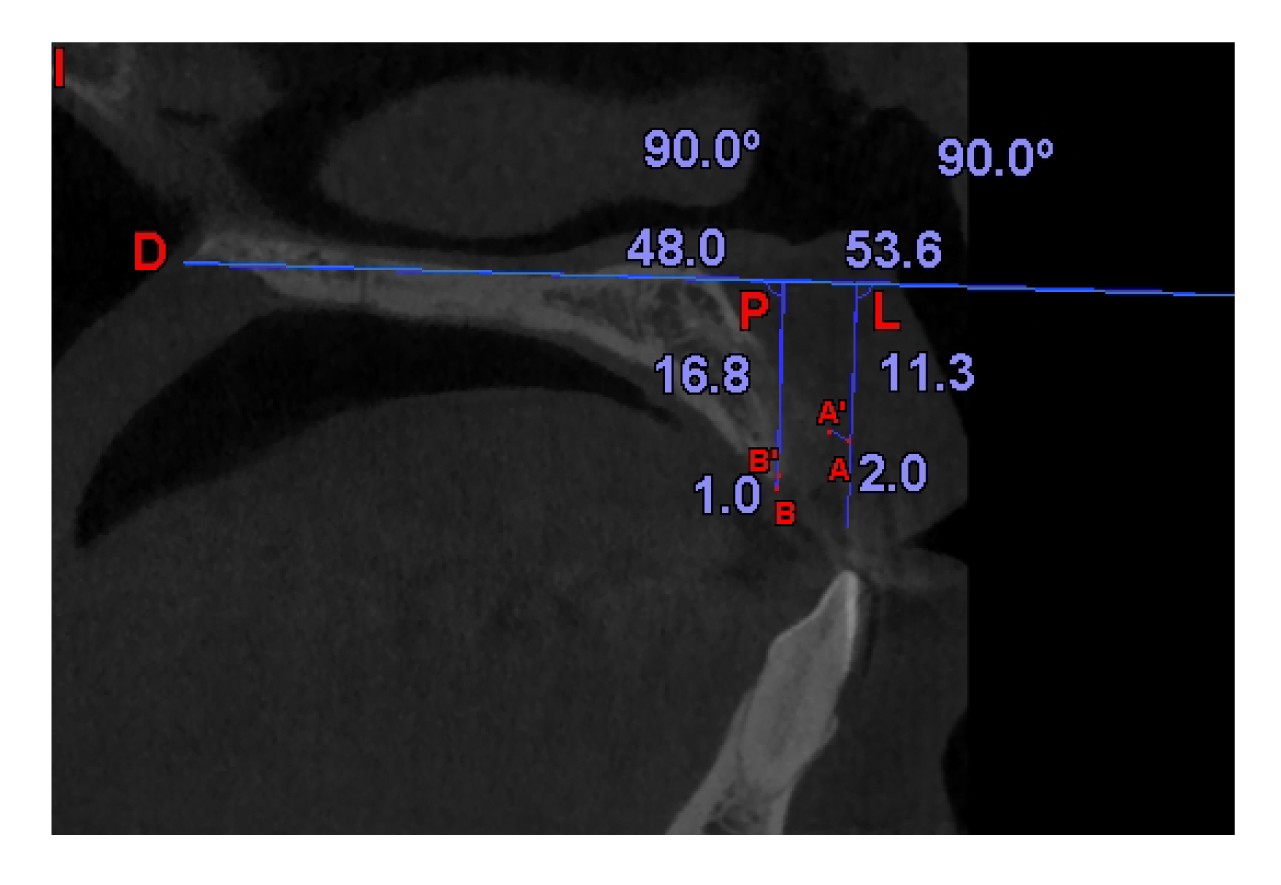 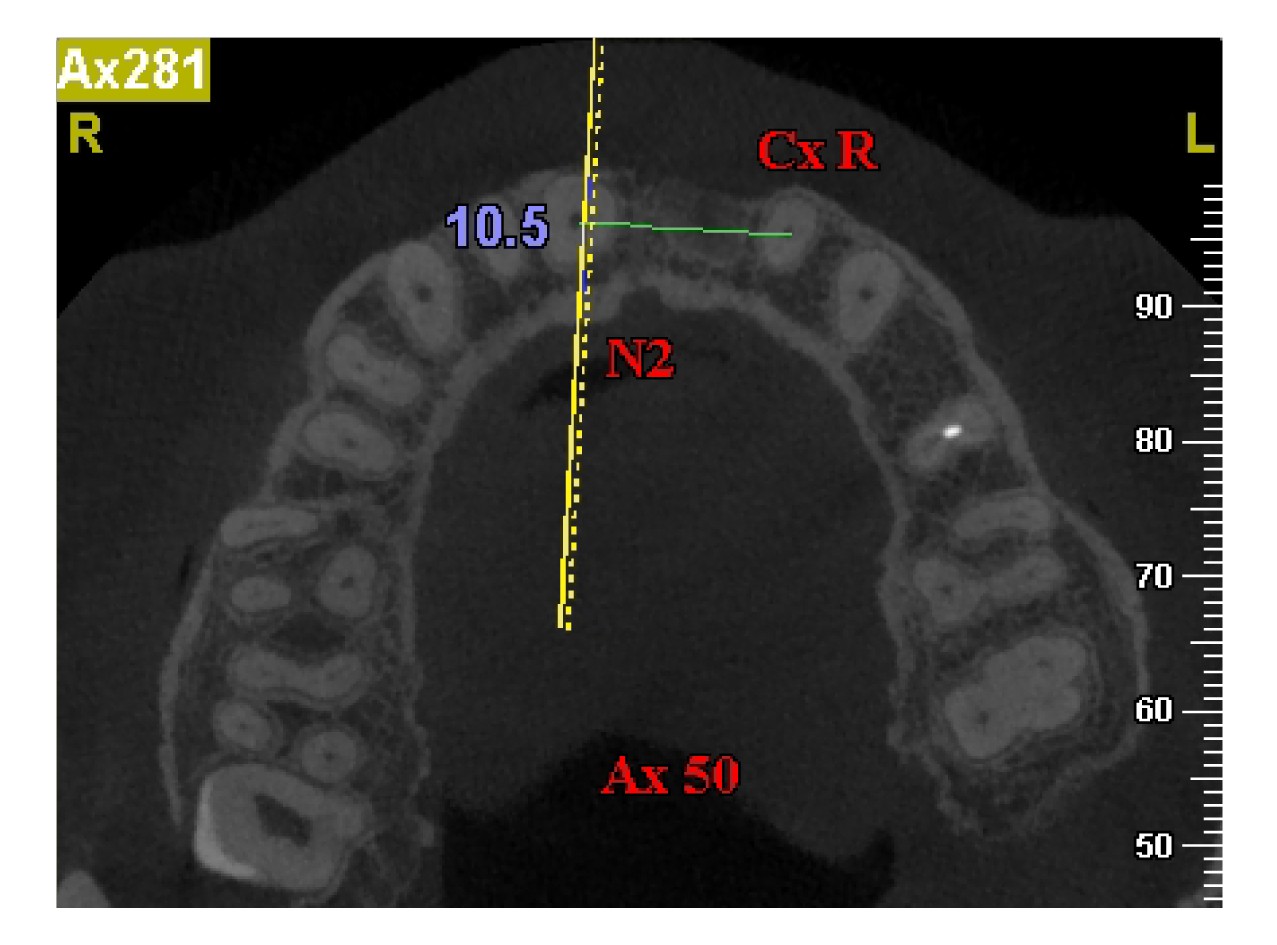 Fig.9
Alveolar bone width of the opposite central incisor at N2-oriented site on Ax50 in CBCT II 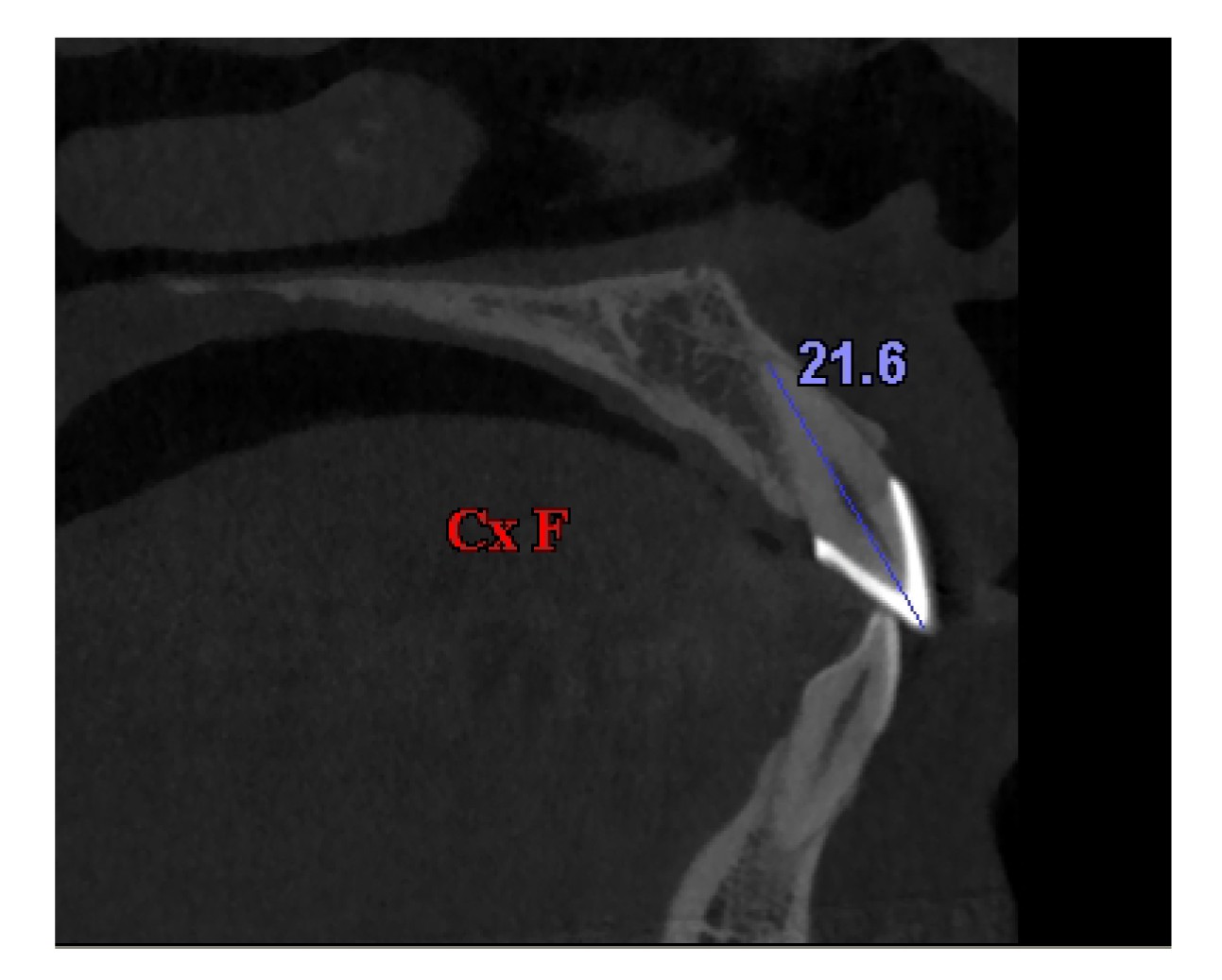 Fig.10
Tooth length of the opposite central incisor on N2-oriented slice in CBCT II

All measurements on CBCT scans were performed by one investigator. To test the intraobserver reliability, 5 patients were randomly selected from the 40 patients. Only CBCT I was used. Orientations of Ax R of each patient were repeated. Sagittal slices were reconstructed based on the line connecting two pulp centres of the lateral incisor and the opposite central incisor on Ax50. Measurements of alveolar bone width on Ax50 and tooth length on Cx T-50 of T were repeated. Orientations and measurements were carried out on 2 d, one week apart and five times each day. Intraclass correlation coefficients (ICCs) for absolute agreement based on a one-way random effects analysis of variance (ANOVA) were calculated using SPSS 18.0 (SPSS Inc., Chicago, USA) software. Means and standard deviations (SDs) of alveolar bone width, tooth length, and height reduction were calculated using SPSS. Paired sample t-tests were performed. A P value <0.05 was selected to indicate a significant difference.

After three-month extraction of the maxillary central incisor, horizontal resorption of labial alveolar bone occurred at different depths of the extraction site, and the further towards the alveolar ridge, the more horizontal resorption occurred. In this study, there was an average width reduction of 2.7 mm near the alveolar ridge, which is less than that reported in most studies. Some clinical studies (Lekovic et al., 1998; Camargo et al., 2000) performed flap elevation and placed titanium pins in the labial alveolar bone of patients as markers at the time of tooth extraction. After six months of healing, a full-thickness flap was elevated again to measure the width and height of the alveolar ridge at the titanium pins. Lekovic et al. (1998) reported an average width reduction of 4.6 mm, while Camargo et al. (2000) reported 3 mm. A clinical study of Schropp et al. (2003) reported that the width of the alveolar ridge reduced by 50% at 12 months after tooth extraction and the bone loss was between 5 and 7 mm. van der Weijden et al. (2009) conducted a systematic review and concluded that the reduction in width of the alveolar ridge was 3.87 mm.

One of the possible explanations for the inconsistent amount of horizontal bone resorption was that the observation interval was different. The observation interval of this study was three months, shorter than those of the abovementioned studies. Since the alveolar bone resorption continues throughout life (Jahangiri et al., 1998), the longer the interval, the greater will be the amount of bone resorption. In addition, it was well established that the elevation of a full-thickness flap might cause crestal alveolar bone loss of about 0.6 mm (Wood et al., 1972), making tooth extraction no longer the sole factor causing alveolar bone resorption (Fickl et al., 2008). This might partially be the reason why studies using the method of flap elevation (Lekovic et al., 1998; Camargo et al., 2000) reported more resorption. Despite the inconsistent amount of bone resorption, most studies agreed the fact that the horizontal reduction was more pronounced at the labial bone wall than at the palatal bone wall (Lekovic et al., 1998; Schropp et al., 2003; Araujo and Lindhe, 2005; Barone et al., 2008).

This study has also proved that after three-month extraction of the maxillary central incisor, vertical resorption occurred on both labial and palatal alveolar bones. The height reduction of the labial plate was 1.9 mm, and that of the palatal plate 1.1 mm. Lekovic et al. (1998) reported an average buccal height reduction of 1.5 mm, Camargo et al. (2000) reported 1 mm, and van der Weijden et al. (2009) reported 1.67–2.03 mm. Most studies were consistent with the conclusion that the height reduction was more pronounced at the labial bone wall than at the palatal bone wall (Lekovic et al., 1998; Schropp et al., 2003; Araujo and Lindhe, 2005; Barone et al., 2008).

CBCT is an ideal imaging tool to observe contour changes in human alveolar bone (Li et al., 2014). Studies of whether alveolar bone preservation techniques or materials are effective in human are suggested to make full use of CBCT.

We sincerely thank Dr. Shi-hai HE (Department of Stomatology, Civil Aviation General Hospital, Beijing, China) for encouragement and assistance for this study.


Compliance with ethics guidelines&nbspBei LI and Yao WANG declare that they have no conflict of interest.