Columnar jointed basalts are the typical type of rock mass materials generated after the condensation of volcanic lava. They are widespread in nature and frequently encountered in civil and hydraulic engineering. For example, the Baihetan hydropower station in southwest China is located in an area containing columnar jointed basalts (Fig. 1). This ten million kW-level hydropower plant will represent the main power supply point for the west-to-east power transmission project in China. The dam foundation and dam abutment are located at an area where columnar jointed basalts are highly developed, leading to anisotropic properties, in which measurements in different directions can produce different values. This unique feature has attracted the attention of many domestic and foreign experts who are conducting in situ geological investigations. 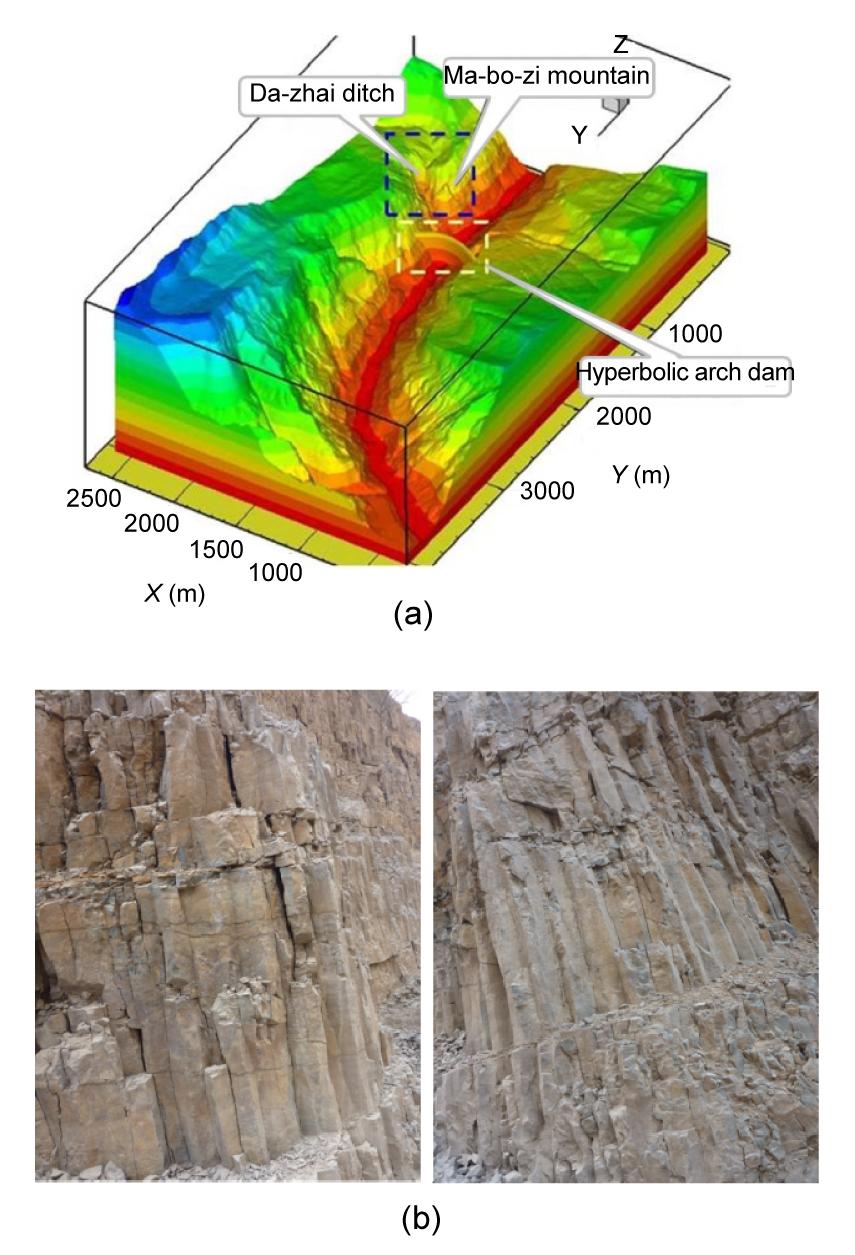 Fig.1
Visual model of Baihetan hydropower station (a) and columnar jointed basalts (b)

According to the traditional classification of engineering geological quality, columnar jointed basalts belong to the group of rock masses with poor integrity. Therefore, the question of whether it can meet the strict deformation requirements of a high-arch dam foundation has drawn wide attention in the engineering field. To investigate the geometric features and engineering properties of basalts, the Basalt Waste Isolation Project (BWIP) conducted simulation-based calculations of columnar jointed basalts using regular hexagons (Hart et al., 1985). An analysis was made concerning the foundation settlement of the skyscraper in Tenerife Island, where columnar jointed basalt was discovered (Justo et al., 2006). Schultz (1996) evaluated the engineering quality of this polycrystalline rock mass and estimated its deformation and strength parameters. However, previous studies did not evaluate the effects of irregular shape distribution of columns’ cross sections. Columnar jointed basalts are generally considered to be discontinuous materials, and deformation and strength properties differ significantly from those of continuum materials.

As the need for construction in columnar jointed basalt areas increases, the corresponding research is being conducted. Based on geological characteristics of columnar jointed basalts in the Baihetan hydropower station, the factors that influenced the deformation performance of these basalts are introduced and explained (Shi et al., 2008), and the Voronoi method to describe the geological structure of columnar jointed basalt were used in simulation studies. Mathematical and mechanical methods were also used in studying the anisotropic behavior of columnar jointed basalts, as well as the constitutive relation, parameter values, and yield criterion. The references is well-applied in the project of the Baihetan hydropower station (Meng, 2007; Zheng, 2008; Xu et al., 2010; 2011a; 2011b; Di et al., 2011; Yan et al., 2011). Deformation mechanical behavior of discontinuous medium is studied. In consideration of dilatancy phenomena and slip and sliding effects, a new interface constitutive model was adopted to simulate the joints, masonry, or concrete-cracked interfaces under monotonic and cyclic loading (Mroz and Giambanco, 1996). Simplified analysis of interface failure under compressive normal stress and monotonic or cyclic shear loading produced encouraging results (Mroz and Bialas, 2005). Felice and Amorosi (2010) made elastoplastic analysis of block structures through a homogenization method, regarded the regular jointed rock mass at a macroscopic scale as homogenized anisotropic media, and provided references for investigation on anisotropic mechanical properties of columnar jointed basalts. Sharma et al. (1989) recommended a flexible bearing plate test to reveal a deformation modulus of jointed rock mass. Tsanga et al. (2005) simulated random fractures in the rock mass as part of the DECOVALEX III and BENCHPAR projects. They performed several numerical tests using universal distinct element code (UDEC), and studied the size of the representative elementary volume (REV) and the equivalent mechanical parameters. Palmstrom and Singh (2001) stated that the loading-unloading test curve should not be included in the calculation of the integral deformation modulus, and they also conducted theoretical research about the deformation modulus of jointed rock mass. Brady et al. (1985) precisely analyzed the loading-unloading regularity of large-size columnar jointed basalts, and discovered three typical mechanical behaviors for different phases. They adopted a theoretical analysis of in situ testing simulation to discuss several problems concerning the joint stiffness, loading-unloading behavior of single jointed rock mass, anisotropic properties of multiple jointed rock mass, and simulation on random models of columnar jointed basalts.

Because of the specific distribution of the structural plane in jointed rock mass, it represents complicated mechanical characteristics of discontinuity, nonuniformity, and anisotropy. It differs from continuum on both strength and deformation, which means that the method of continuum theory is not applicable. Jointed rock mass is a component of rock block and distributed joints; hence, rock block and structural plane superposition methods can be used to calculate the deformation of rock mass. As the existing method and in situ test method cannot reveal the anisotropic properties of jointed rock mass from mechanical essence, it is necessary to start with the fundamental principle of rock mass mechanics. With a deep understanding of mechanical properties of joints and macro-deformation law of rock mass, the anisotropic characteristics of columnar jointed basalts can be comprehended.

The description concerning the typical loading-unloading curves of columnar jointed basalts is as shown in Fig. 2. The loading-unloading curve during the initial phase of loading should not be included in the calculation of integral deformation modulus because the experiment point was subjected to the influence of excavation blasting. Therefore, joints were tight and close at this stage, but did not represent the state of undisturbed rock mass. 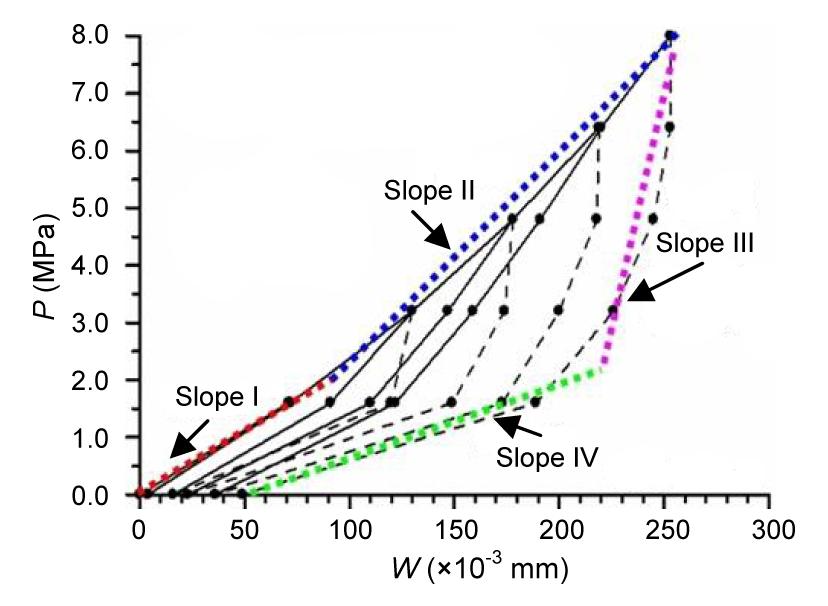 Complex jointed rock mass behaved according to the pattern mentioned above; thus, the study of single jointed rock mass should be conducted so as to fully understand the mechanical properties of this type of rock mass. For a rock mass with only one closed joint for analysis, the conceptual model is shown in Fig. 3a. The mechanical parameters are as follows: k rn and k rs are the compression and shear stiffness of rock block, E is the elastic modulus of rock block, k is the integral equivalent stiffness of rock mass, β is the angle between the normal direction of joint surface and the loading direction, K jn and K js are the normal and tangential stiffness of join, φ is the friction angle of joint, l is the length of closed joint, and L−l is the length of rock bridge. The stress distributions and deformation characteristics of jointed rock mass are very complicated; nevertheless, the conceptual model can capture the essence of the issue and can reveal the mechanical properties of rock mass. 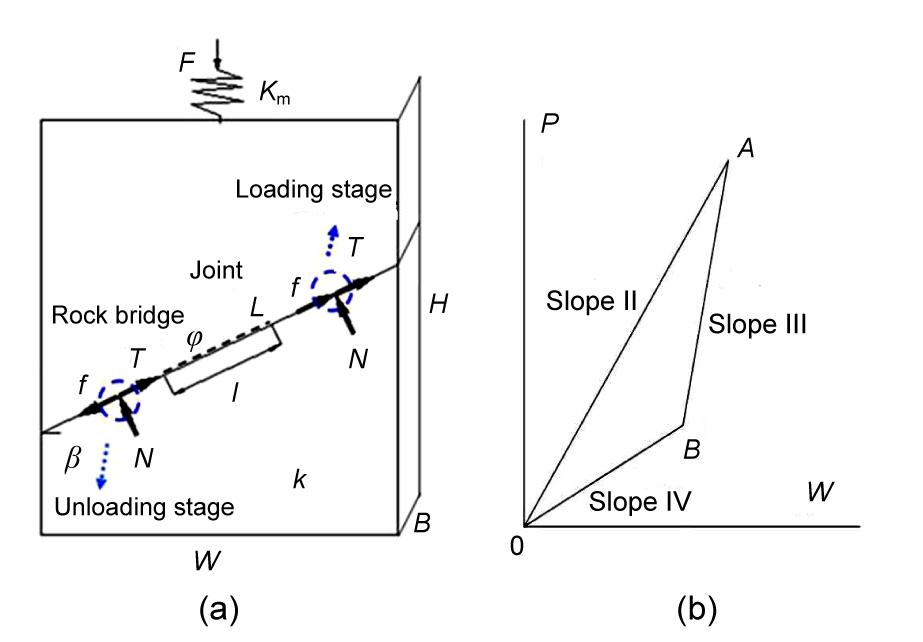 Suppose the rock block is an ideal elastic material, i.e., the value of joint stiffness does not vary with the change of stress, and the stress condition of the rock mass is the same as that of rock block. When the rock mass generated the smaller deformation, the loading was not big enough to overcome the boundary constraints and friction-locking strength between joint surfaces, and the essential relative sliding did not occur. The shear and compression deformation of joint surface was totally recoverable and elastic, namely, a cell with elastic joints, which was applied to the conditions of smaller deformation, smaller loading, higher geostress, and harder rock mass. If the initial compression phase of the rock mass was omitted, for simplicity, the loading-unloading curve of single jointed rock mass is as shown in Fig. 3b.

The corresponding stiffness are 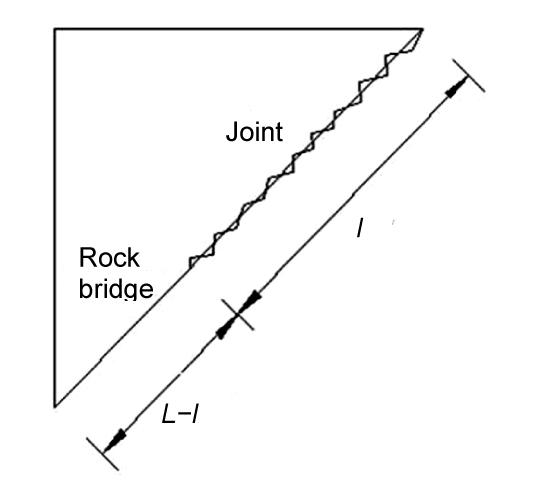 When both of the rock bridge and joint are taken into account, the equivalent stiffness and can be expressed as where K rn and K rs represent the compression of rock block and joints, which can be measured through the pressure-shear test in laboratory. This allows for ease in calculation of the equivalent deformation of discontinuous jointed rock mass, by introducing the concepts of and . As a more general method for a discontinuous joint, Eqs. (8) and (9) can replace K jn and K js in Eqs. (2) and (3), resulting in

When the joints are continuous in the rock mass, and in Eqs. (10) and (11) can be degenerated into the stiffness of joints.

As the load gradually increases until it overcomes the boundary constraints and joint friction locking strength of the model, the relative sliding trend between the joint surfaces occurs. At this point, a combined frictional-elastic interface can be specified. When the load is small, the deformation is elastic, and the deformation will be back to the point of origin after unloading (Fig. 2). In other words, the larger the load, the bigger the hysteresis loops, the joint effects, and the energy absorption. Ideally, the cells with elastic joints and combined frictional-elastic interface can be viewed as two different mechanical behaviors of jointed physical model under different situations.

The combined frictional-elastic interface can be analyzed, and the loading phase should meet the following relationship: where T is the tension generated at the top of joints, N represents the normal force of equivalent continuous joint, f is the frictional resistance along the joint surface, is the deformation of joints along the joint surface, and u′ is the total axial deformation of rock mass with consideration of joint deformation.

The curve slope of the loading phase can be deduced by substituting Eq. (14) into Eq. (15):

When the vertical load is removed at a certain rate, the jointed rock mass generates an inverse resilience. If the frictional resistance is strong enough to stop the joint surface from sliding upward, the displacement only represents the deformation of rock mass without the slip value of joints. Then Slope III =k/(BW), simultaneously the unloading stage can be described as follows:

If the model is considered as a square with unit length, then the slopes can be derived as

The elastic parameter k (containing joint stiffness k j and rock block stiffness k r, as shown in Eq. (1)) is included in Eqs. (12)–(21) of the calculation method of combined frictional-elastic interface. The method includes the calculation method of elastic joints cell. Eqs. (1)–(7) of elastic joints are the foundation of deducing Eqs. (12)–(21). The inclination angle of columnar jointed basalt is generally between 70° and 80°, thus Slope IV