Currently, the main design methods of the high-speed train head are wind tunnel tests and numerical simulation. The general design idea of the high-speed train head design is as follows: the first step is to map out various head types, the next step is to compare and pick out a best head type through wind tunnel tests or numerical simulation, and the last step is to improve the design according to the operational conditions. Maeda et al. (1989) gave some suggestion for the purpose of aerodynamic drag reduction based on the aerodynamic drag comparison of 0 series, 100 series and 200 series on Shinkansen, Japan. Kikuchi et al. (2001) studied nine kinds of train heads (the combination of three types of nose section configuration and three different nose lengths) using the 3D boundary element method, and found out that the nose section configuration resembling a wedge could effectively reduce the air pressure pulse due to train passage. Hemida and Krajnović (2010) analyzed the effect of nose length on the flow field and aerodynamic force of the high-speed train. The calculation results showed that the flow structure and aerodynamic force of the high-speed train with a long nose were much different from those with a short nose. The short nose represented more transient and 3D characteristics. Essentially, the methods adopted mentioned above belong to the optimum seeking method which is heavily dependent on engineering experience, and only the relationships between a single optimization design variable and optimization objectives are obtained. As a result, the final selected head may not be the optimal one.

To get the global optimal head shape, the direct optimization method should be adopted. The direct optimization design means using mathematical methods to seek for the minimum or maximum (such as the minimum of the aerodynamic drag or the minimum of the load reduction factor) of some design goals while at the same time satisfying certain constraint conditions. Therefore, the optimization design problem of the high-speed train head can be transformed into a multi-objective constrained optimization problem. Optimization design variables are extracted from the parametric modeling of the high-speed train, which can be automatically updated through the multi-objective optimization algorithm. Optimization objectives can be obtained by the calculation of aerodynamics and vehicle system dynamics of the high-speed train. Currently, very few studies on multi-objective optimization design of train head can be found. Kwon et al. (2001) studied the influence of the nose shape on the intensity of the pressure gradient of the compression wave at the tunnel entrance, where the response surface method was used as a basis for the optimization of nose shape of high-speed trains. The analytical results showed that the front 20% part of the train nose played the most important role in the minimization of the maximum pressure gradient. Lee and Kim (2008) developed a proper approximate metamodel to deal with the nose shape design of the high-speed train so as to minimize the maximum micro-pressure wave, and suggested an optimal nose shape that was an improvement over the current design in terms of micro-pressure wave. Sun et al. (2010) combined genetic algorithms and arbitrary shape deformation techniques to optimize the head shape of the China Railways High-speed3 (CRH3). Ku et al. (2010) used the Broyden-Fletcher-Goldfarb-Shanno (BFGS) algorithm and response surface model to minimize the micro-pressure wave. The cross-sectional area distribution of high-speed trains with different nose lengths was selected as an optimization design variable to conduct the single-objective optimization design. Ikeda et al. (2006) and Suzuki et al. (2008) used B-spline curve to set up a parametric model of cross-sectional panhead, and optimized the shape of the cross-sectional contour of the panhead. Yao et al. (2012) adopted a new parametric approach called local shape function based on the free form surface deformation, and a new optimization method based on the response surface method of genetic algorithm-general regression neural network (GA-GRNN). After optimization, the aerodynamic drag for a three carriage train was reduced by 8.7%.

The French economist V. Pareto was the first person to study the multi-objective optimization problem within the field of economics, and proposed the concept of the Pareto-optimal set.

To solve the multi-objective optimization problem is to find the Pareto-optimal set. Then a compromise solution needs to be made by the decision-makers in accordance with the relevant information and requirements.

3.  3D parametric model of the train

The 3D parametric model of the high-speed train is established by CATIA. To achieve the automatic deformation of the head shape, the following three tasks need to be done successively:

3.1.  Entity model of the left half of the train head

As the head shape of the high-speed train has a good symmetry, only the left half (or right half) portion of the train head needs to be modeled. The head shape of the high-speed train is quite complex, which cannot be described by simple analytic surfaces, but can be described by continuous splicing of some sub-surfaces. In this study, a number of B-spline surfaces are used to approximate the outer surface of the left half portion of the train head. B-spline surfaces are constituted by a series of B-spline curves, which are generated by a series of control points on the surface of the train head. 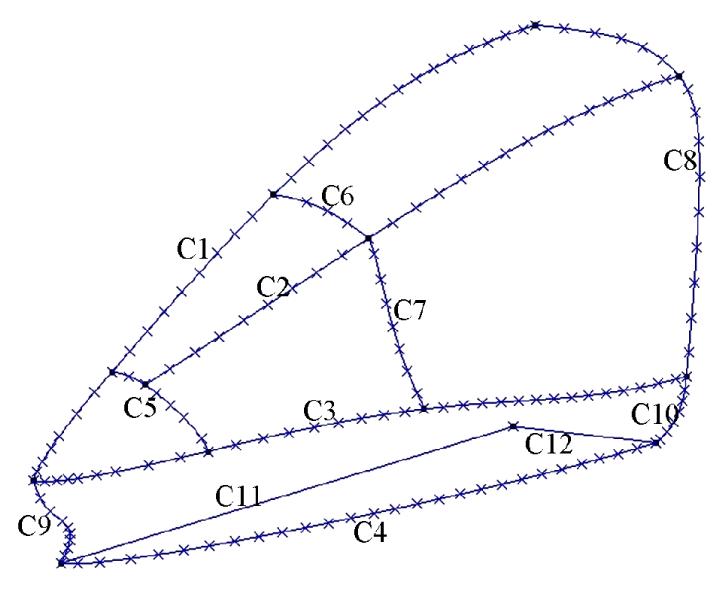 Fig.2
Left half model of the train head

3.2.  Parametric model of the high-speed train

To optimize the head shape of the high-speed train, five optimization design variables are selected, which correspond to the longitudinal symmetry line C1, the maximum horizontal contour line C3, the bottom horizontal contour line C4, the central auxiliary control line C7, and the nose height, respectively. With the increase of the streamlined length, the aerodynamic performance of the train will significantly be improved. Therefore, on the basis of a fixed streamlined length, the external shape of the train head is optimized to improve the aerodynamic performance and vehicle dynamic performance of the high-speed train. 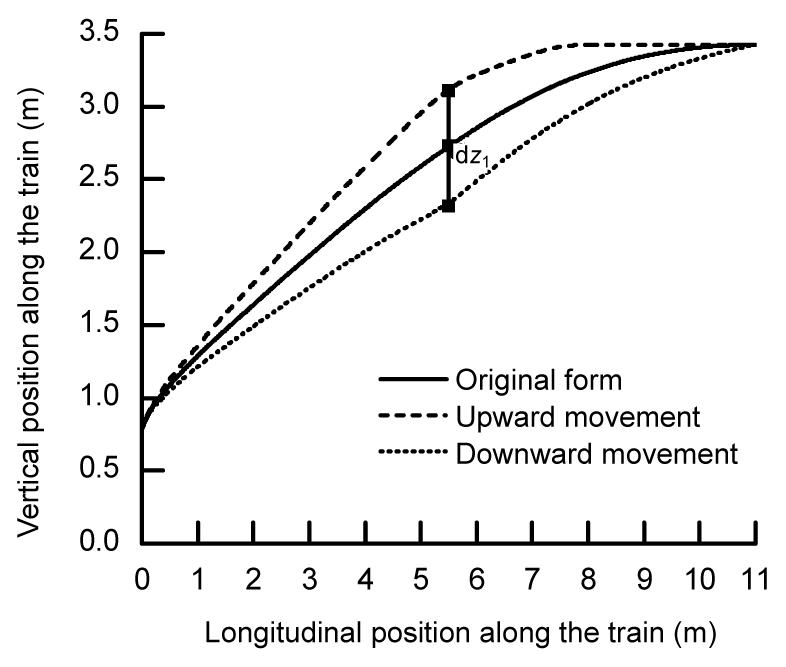 Fig.4
Deformation of the horizontal maximum control line
The deformation of C4 is similar to that of C3, and the optimization design variable is dy 4, which will not be described in detail here. 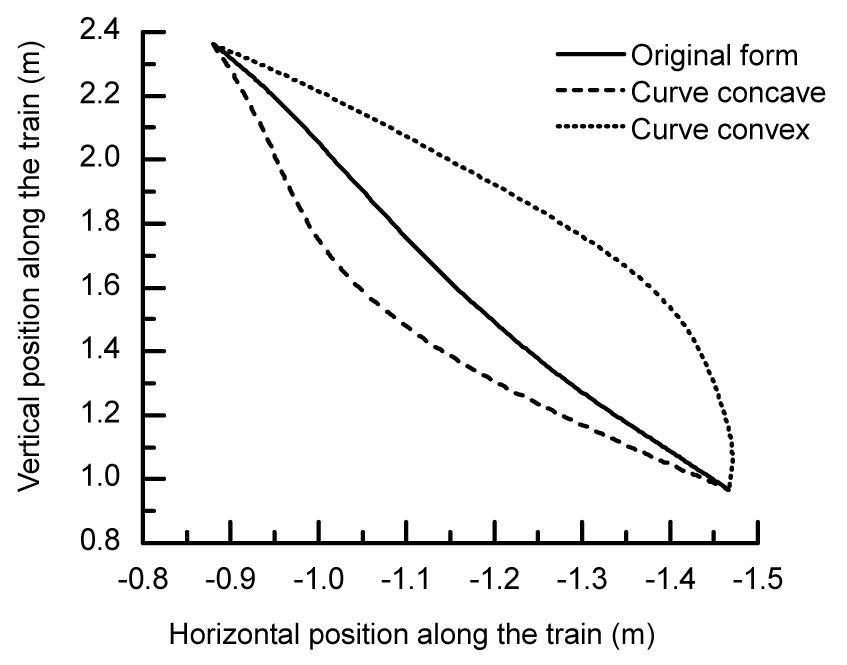 Note that when these curves mentioned above perform deformation, the relevant curves also need to be changed to ensure that the surface of the train head is continuous and smooth.

When optimization design variables are determined, the coordinates of the 162 control points in the script file of CATIA are modified by the MATLAB program, and then a new head shape of the high-speed train can be produced by running the script file.

As a high-speed train running on the open track, the operating speed is generally not more than 400 km/h. The impact of the air density on the flow can be ignored without taking into account the trains passing each other or going through a tunnel. Therefore, the incompressible steady flow is adopted to simulate the flow field around the train, and the standard k-ε turbulence model is adopted, then the control equation of which can be expressed as follows (Versteeg and Malalasekera, 2007): where ρ is air density, u is velocity vector, φ is the flow flux, S is the source item, and Γ is the diffusion coefficient.

The train model for computing the flow field around the train is the 3D parametric model established in Section 3. The flow field computational domain is shown in Fig. 6. The left of the computational domain is set as the velocity inlet boundary, the right as the pressure outlet boundary, the two sides and the top as the symmetric boundary, and the train surface as the stationary wall boundary condition. The ground is set as the slip wall boundary condition, and the slip velocity as the train speed in order to simulate the ground effect. The triangle mesh is generated on the train surface, and the tetrahedral mesh is used for spatial meshes. 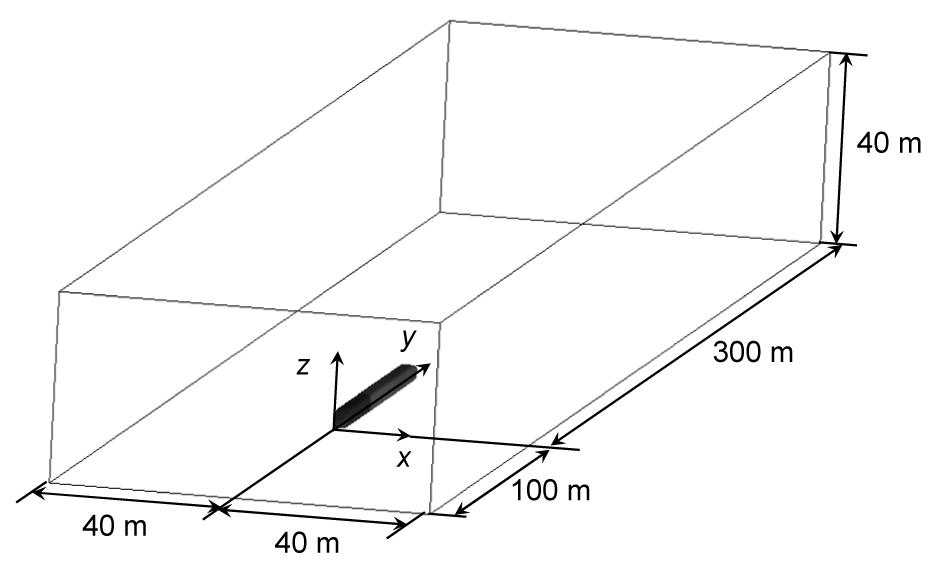 To perform the automatic optimization design of the high-speed train head, the mesh generation and the aerodynamics calculation of the high-speed train should be executed automatically. The script files of ICEM and FLUENT are used for the automatic mesh generation and aerodynamics calculation, respectively. The script files can be performed by the batch command.

A multi-body system dynamics model of the high-speed train is constructed by SIMPACK. The multi-body model of a single car is composed of one carbody, two bogies, four wheelsets, and eight tumblers. The rigid carbody, bogie, and wheelsets have six degrees of freedom each, while the tumbler has one. The dynamics model of a single car has 50 degrees of freedom. The train dynamics model with three carriages of “trailer car-motor car-trailer car” is built in this study, which has a total of 150 degrees of freedom. As to the trailer car and motor car, the degrees of freedom, the connection and constraints of the various components, the structure and most of the suspension parameters are exactly the same. The difference only exists in some local parameters such as the body mass, center of gravity height, and body rotational inertia. The wheel rail contact is in general the core of a railway model. LMA tread and T60 rail are used in this model. Track irregularities complicate the evaluation of the wheel unloading. Here, we adopt the measured track spectrum of a high-speed railway in China as the track irregularity.

The aerodynamic loads are dealt with as the external loads on the multi-body system dynamics model to analyze the operational safety of the high-speed train. Due to the translation and equivalent of the force, the pressure distribution can be simplified to a given point to obtain the concentrate forces and moments. The batch command can be used to call the file of SIMPACK named profile.ksh to realize the automatic calculation of vehicle system dynamics and the automatic output of the calculation results.

In this study, the algorithm NSGA-II is adopted, which is a widely used EMO method. NSGA-II proposes a fast non-dominated sorting approach with an elitist strategy, and replaces the sharing function approach with a crowded-comparison approach, which does not require any user-defined parameter for maintaining diversity among population members. The main loop of NSGA-II is described as follows (Deb et al., 2002): 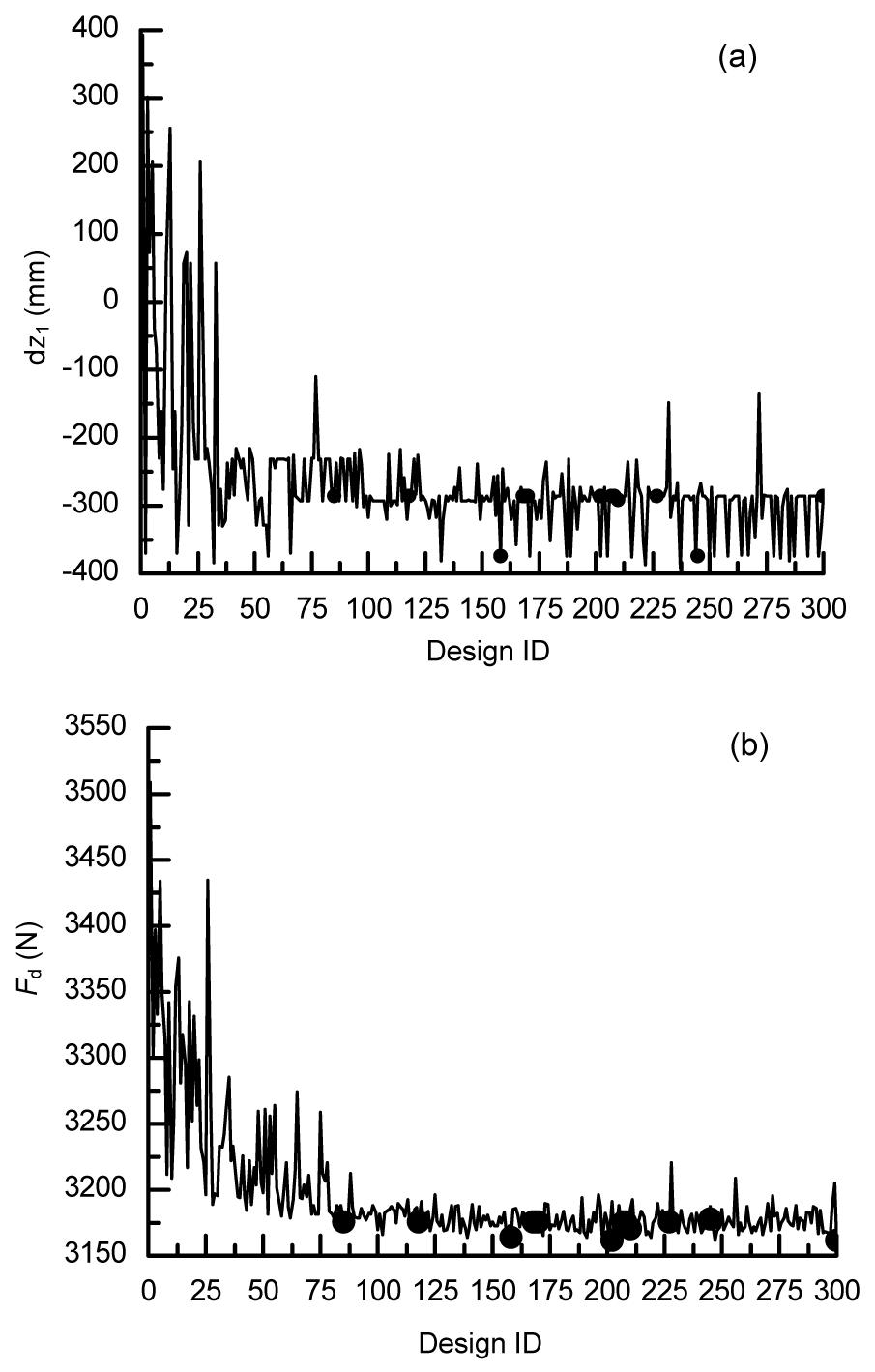 Fig. 8 shows the correlation coefficients between optimization objectives and optimization design variables. As shown in Fig. 8a, a positive correlation between the variables dz 1, nscale, and the objective F d within a certain range can be found, which means that a more concave longitudinal symmetry line or a shorter nose height would lead to a lower aerodynamic drag. A negative correlation between the variables dy 3, dy 4 and the objective F d can be found, which means that when the horizontal maximum control line or the bottom horizontal contour line moves to the longitudinal symmetry, the aerodynamic drag would decrease. As shown in Fig. 8b, a positive correlation between each design variable (except the central auxiliary control line) and the load reduction factor within a certain range can be found. There is little impact of the variable dy 7 on the aerodynamic drag or the load reduction factor. 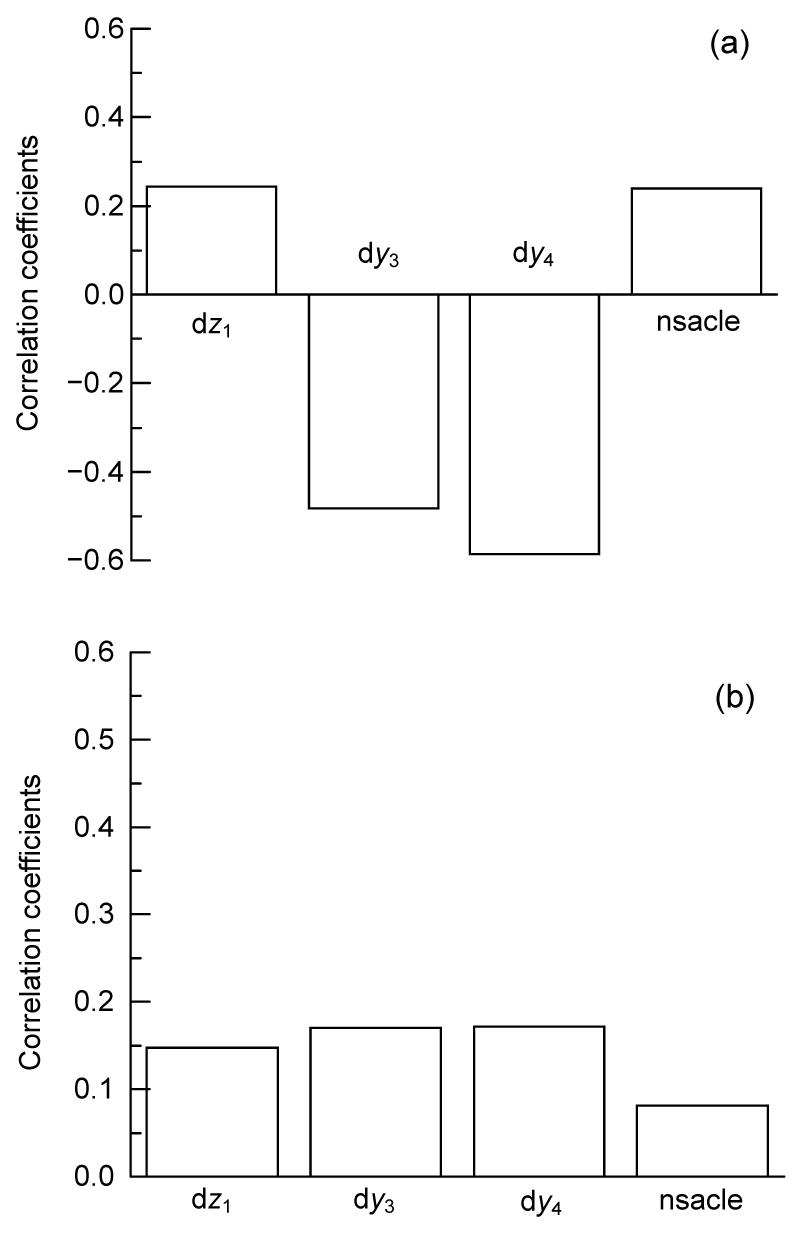 To further dig the nonlinear relationship between optimization objectives and optimization design variables, according to the analysis above, the variables dy 4 and dy 3, which are the most influential parameters, are chosen to conduct the response surface analysis with the aerodynamic drag. A 3D response surface of aerodynamic drag F d, the variables dy 4 and dy 3 is shown in Fig. 9. No pure linear relationship exists among F d, dy 4, and dy 3, which can never be attained by a usual optimum seeking method (Fig. 9). The aerodynamic drag F d of the high-speed train shows a decreasing trend with the increase of dy 4 or dy 3, which is coincident with the results of Fig. 8. 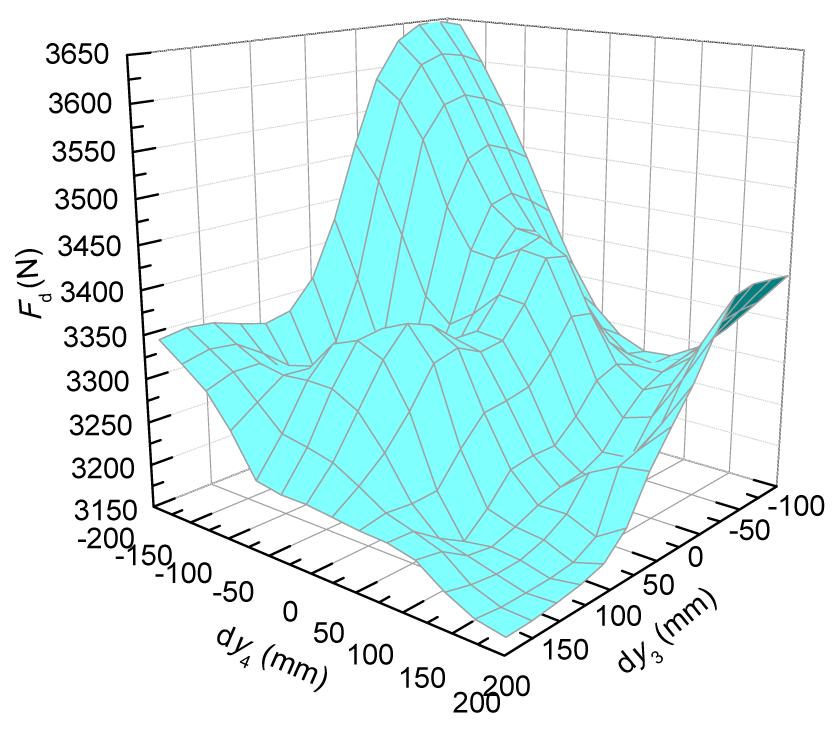 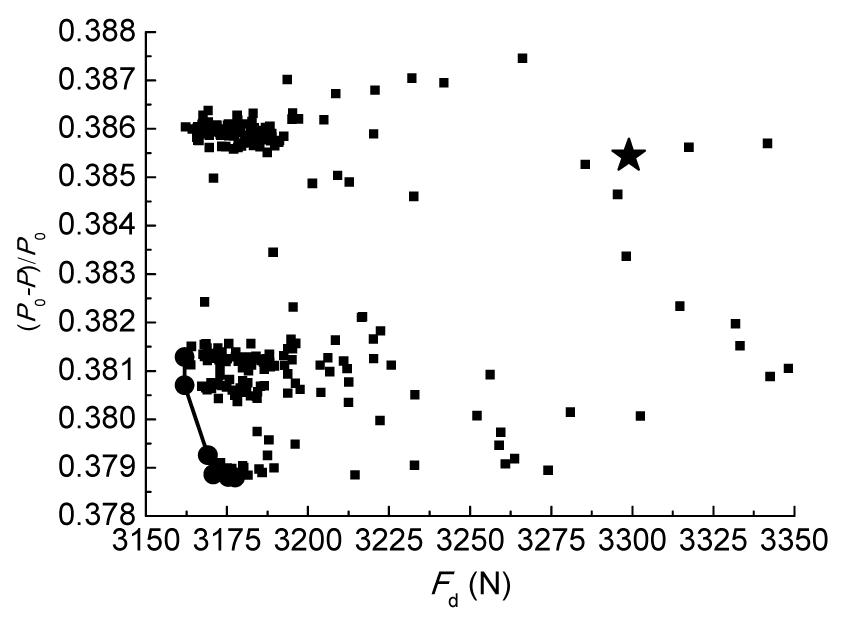 
*&nbspProject supported by the National Natural Science Foundation of China (No. 50823004), the National Key Technology R&D Program of China (No. 2009BAG12A01-C09), the 2013 Doctoral Innovation Funds of Southwest Jiaotong University and the Fundamental Research Funds for the Central Universities, China

[6] Hemida, H., Krajnović, S., 2010. LES study of the influence of the nose shape and yaw angles on flow structures around trains. Journal of Wind Engineering and Industrial Aerodynamics, 98(1):34-46.