1. Strength and deformation....2. A field study on the behavior of....3. Theory and techniques for....4. Effect of soil set-up on the capacity....5. Reliable evaluation method of quality....6. Carbon steel slag as cementitious....7. A semi-analytical method for the....8. High temperature mechanical....9. Design-oriented modeling of circular....

Most soft soil is characterized by very high compressibility and water content, and low shear strength and permeability. Constructing embankments over such soft foundations are known to cause large total or post construction settlement, lateral movement, and excess pore pressure (Suematsu et al., 1984). To control the settlement and lateral movement under embankments, there are two methods usually used to reinforce soft foundations. One is to enhance the soil strength such as by vacuum preloading or surcharge preloading, with the use of vertical drains to accelerate the consolidation rate during the preloading process (Johnson, 1970). The other is to install vertical or horizontal ground improvement into the soil which is referred to as a composite foundation (Arulrajah et al., 2009; Six et al., 2012; Zhou et al., 2013). The combined shear strength and compression modulus of composite foundations are greater than those of the original soft foundations, so that the settlement and lateral movement due to embankment construction can be controlled effectively.

As a vertical ground improvement technique, piles are used worldwide in soft foundation improvement, not only to improve bearing capacity, but also to reduce the settlement of soft clay (Lorenzo and Berga, 2003; Borges et al., 2009; Chen et al., 2012).

Deep cement mixing (DCM) columns and precast concrete piles are two kinds of pile foundation systems widely used to support embankments built over soft soil (Lin and Wong, 1999). The installation method for DCM columns is to cut through soft soils by rotating blades whilst cement is mixed with the soil at the same time. Then the soil-cement column, with higher shear and compressive strength than those of the original soil, becomes a solid in situ. Due to their relatively low strength, DCM columns need to be installed at close proximity to each other to control total and post construction settlements effectively, and are not suitable for medium or high design load construction. Precast concrete piles are deemed uneconomical to improve embankment foundations, because shear failure of the pile-soil interface always occurs when much of pile’s compressive strength has not been exerted (Han and Xu, 2000). Considering the respective advantages and disadvantages of DCM columns and precast concrete piles, a new kind of composite pile, known as a concrete-cored DCM pile, was developed to improve soft ground under embankments. A precast core pile was inserted into a DCM column after it was installed but before the initial setting of the soil-cement as shown in Fig. 1 (Dong et al., 2004). D D is the diameter of DCM column socket, D c is the diameter of precast core pile, L C is the length of precast core pile, and L D is the length of DCM column socket/DCM column. 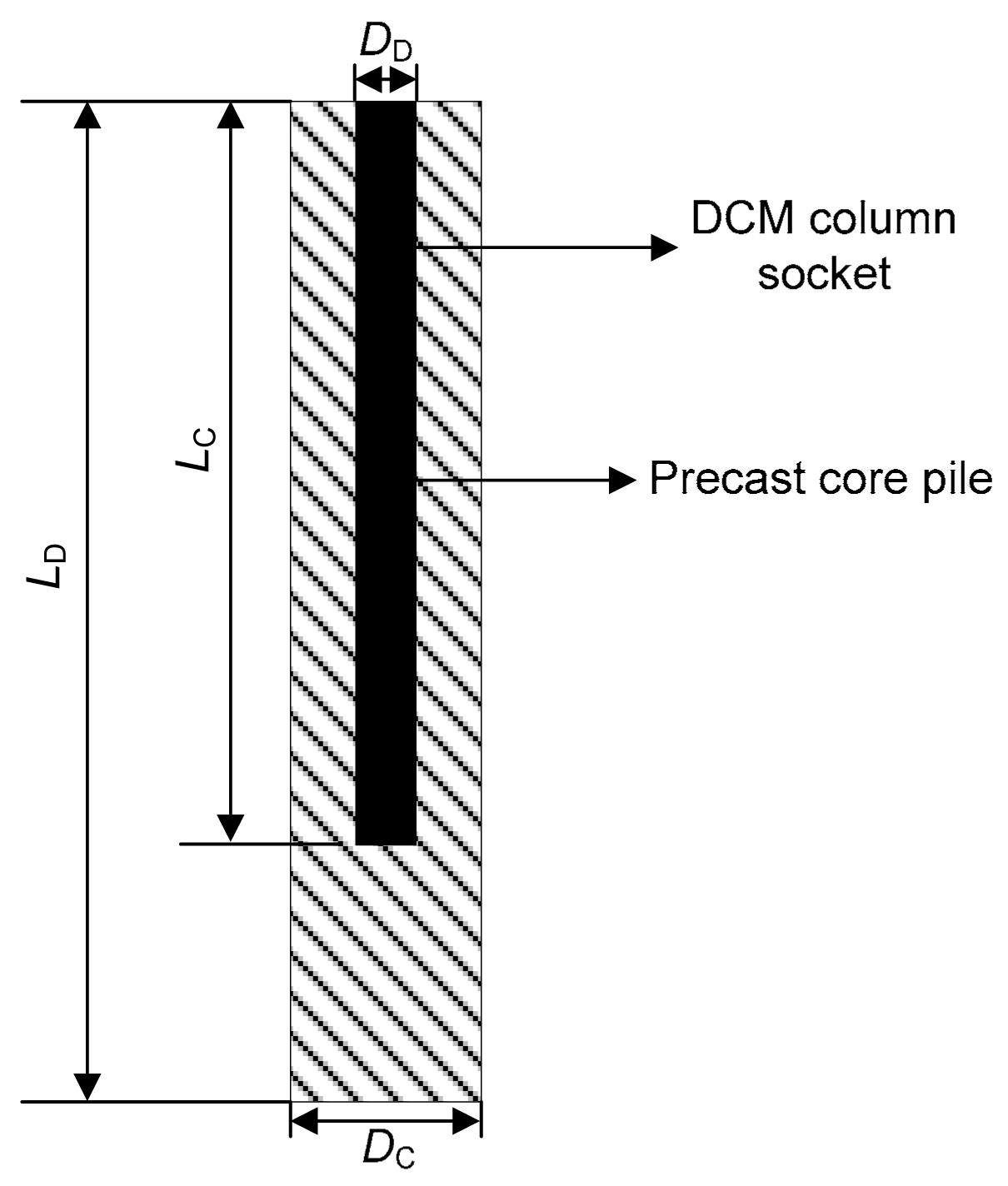 Until now, all research about load transfer characteristics, bearing capacity, and settlement of concrete-cored DCM piles has been based on plate load tests (PLTs). The load plate is rigid and the effective load transfer depth is limited according to the limited load plate area. The engineering characteristics of concrete-cored DCM piles obtained from PLT are not in accordance with those under an embankment, where the load is variable and is over a large area. Few research projects based on concrete-cored DCM pile-supported embankments have been reported. The performance of such foundations under an embankment is not very well known.

In this paper, according to the foundation treatment engineering in the northeast section of the Nanjing Surrounding Expressway (NS-N Expressway), China, long time field tests of composite foundations reinforced by both concrete-cored DCM piles and conventional DCM columns under embankments were conducted. Based on field tests, ultimate bearing capacity, total settlement, settlement along depth, lateral movement, loading sharing ratio, vertical stress of the precast core pile and excess pore pressure were obtained. The reinforcement effects of composite foundations reinforced by concrete-cored DCM piles and conventional DCM columns were compared. The load transfer characteristics and settlement control mechanism of concrete-cored DCM piles under embankments were discussed.

The Nanjing Surrounding Expressway (NS Expressway) is the outer ring of Nanjing city. The northeast of this expressway (NS-N Expressway) which connects with the Fourth Nanjing Yangtze River Bridge, is 26.8 km long. With six lanes, the width of the NS-N Expressway is 34.5 m. Construction began in October, 2010 and finished in August, 2012. Due to it being located a short distance away from the Yangtze River, there is widespread distribution of thick soft soil along the expressway. The engineering properties of soft clay are high compressibility, low shear strength, and low permeability. To ensure stability of the embankment during the filling period, and to reduce total and differential settlements, different ground treatment methods were used. 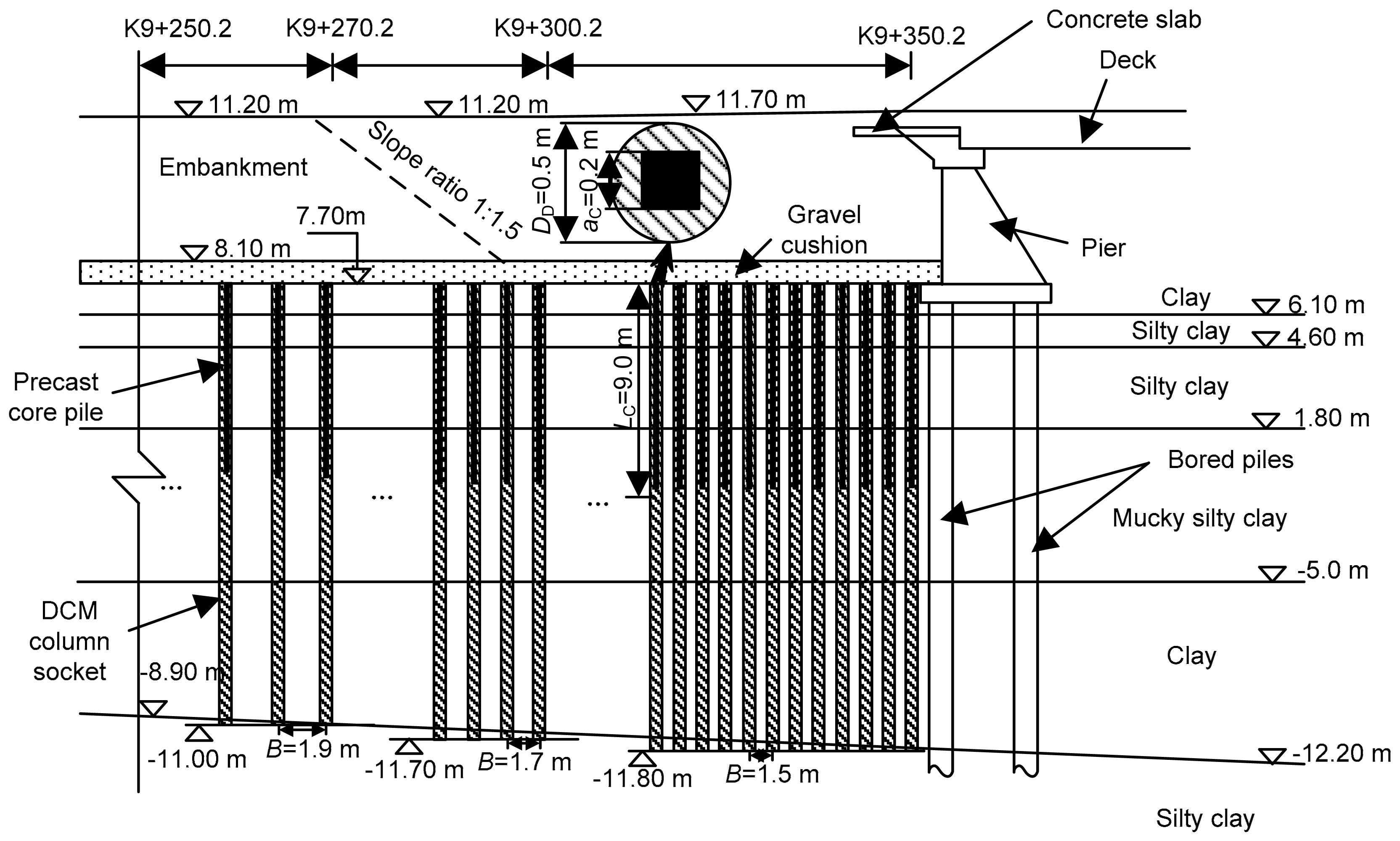 Pile parameters of test sites
The four test sites were used as farmland before the expressway construction. The ground elevation after leveling is 7.7 m above the mean sea level. The ground water level is about 1.3 m below the ground surface.

To obtain the ultimate bearing capacity of composite ground reinforced by concrete-cored DCM piles, plate load tests on single pile composite foundations were conducted on three concrete-cored DCM piles (the numbers of test piles at Site A are C-DCM1, C-DCM2, and C-DCM3) and three DCM columns (the numbers of test piles at Site D are DCM1, DCM2, and DCM3) at 28 d after pile installation.

To estimate the effect of foundation reinforcement and obtain the engineering characteristics of a concrete-cored DCM pile composite under embankments, monitoring instruments including settlement plates, multipoint settlement gauges, inclinometers, piezometers, pressure transducers, and steel stress meters were installed at three test sites (Site A=K9+310, Site B=K9+290, Site C=K9+260) as shown in Fig. 4 and Fig. 5. Due to similar locations of instruments at the three test sites, except that there were no multipoint settlement gauges at Site A and Site C, details of Site B are described as follows as an example. 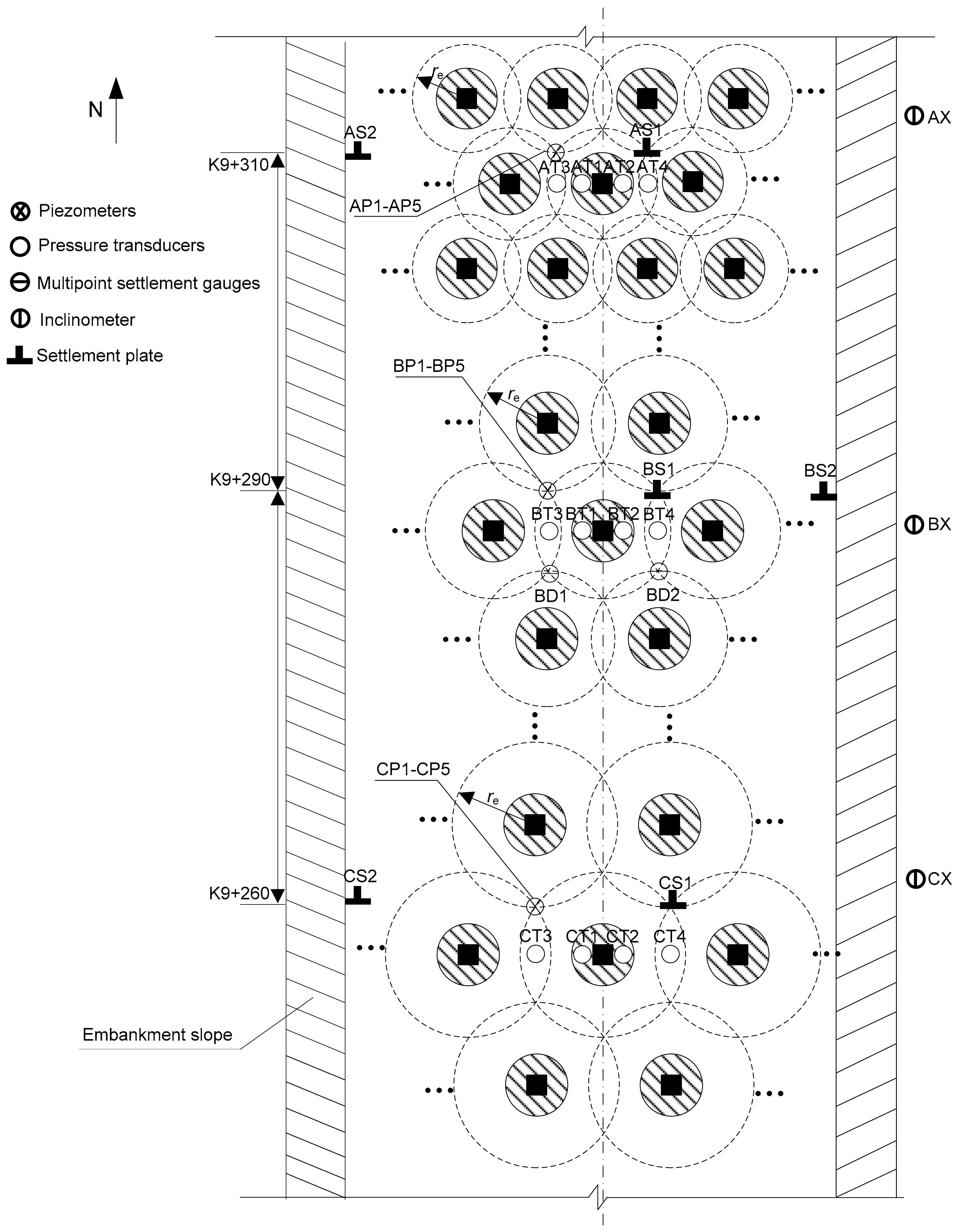 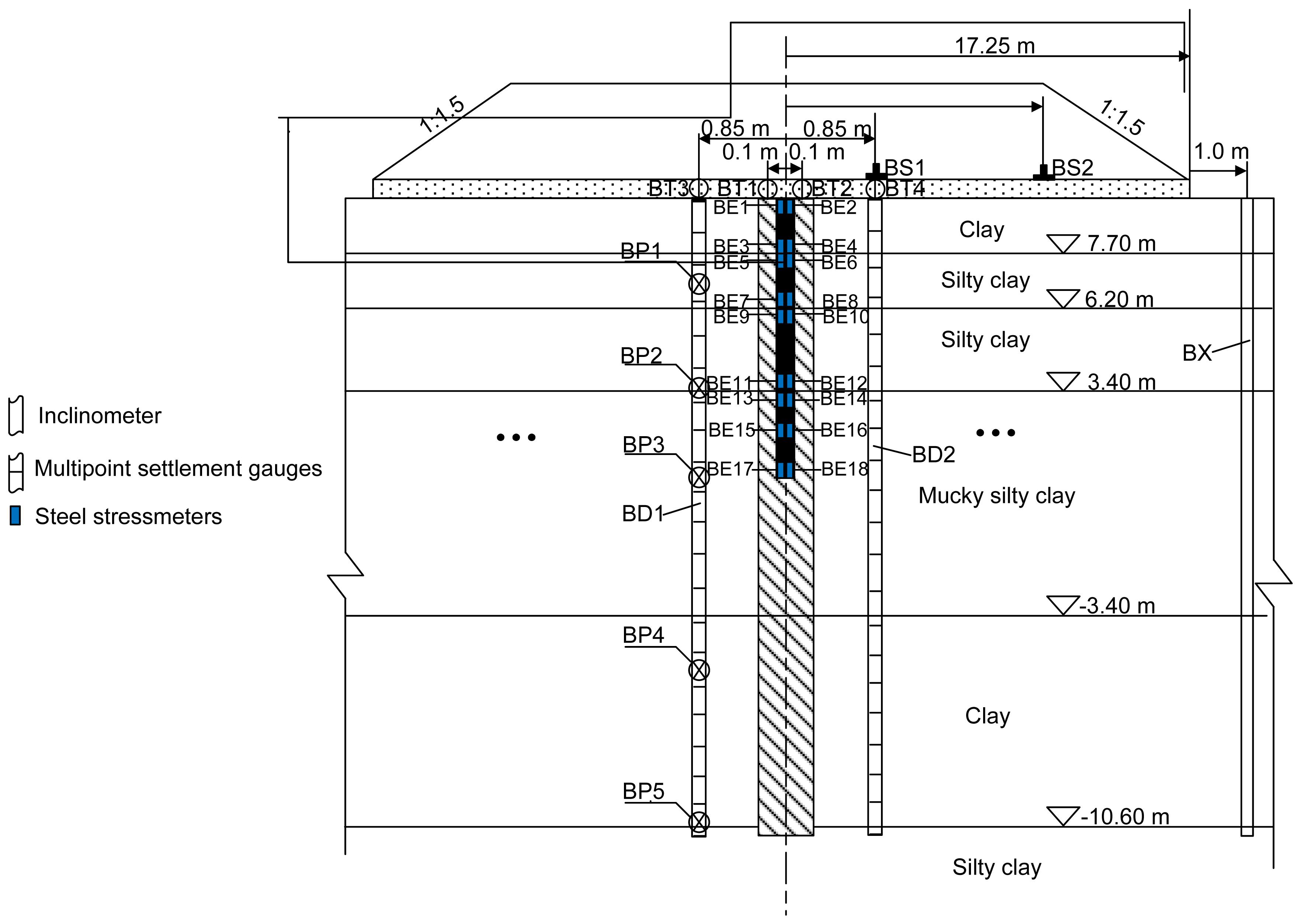 Fig.5
Sectional profile of instruments locations at Site B
Finally, to compare the foundation treatment effect and load transfer law of a foundation reinforced by a concrete-cored DCM pile and DCM column, monitoring instruments including settlement plates, inclinometers, piezometers and pressure transducers were also installed at Site D. The locations of instruments at Site D were similar to those at Sites A, B, and C. 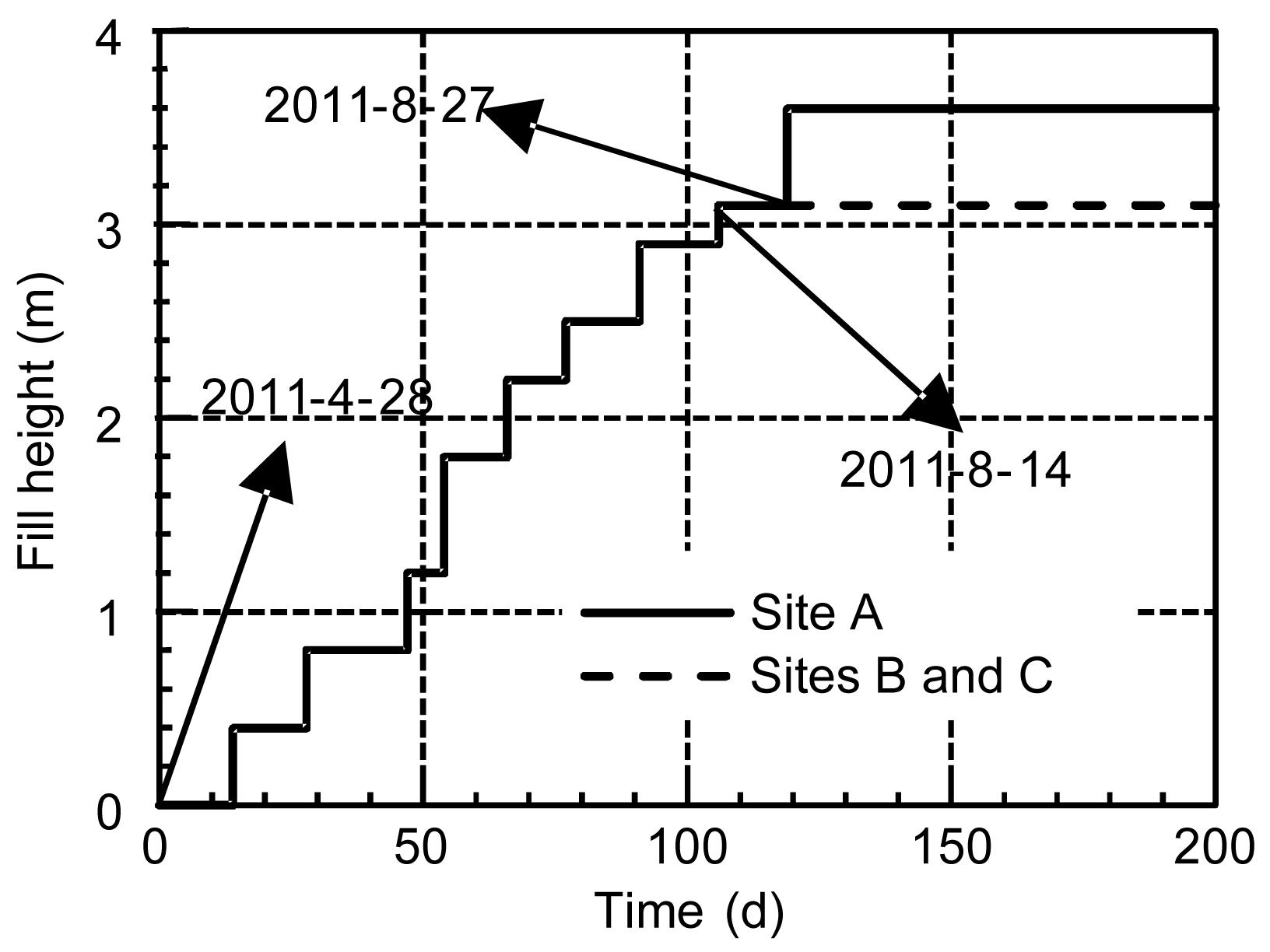 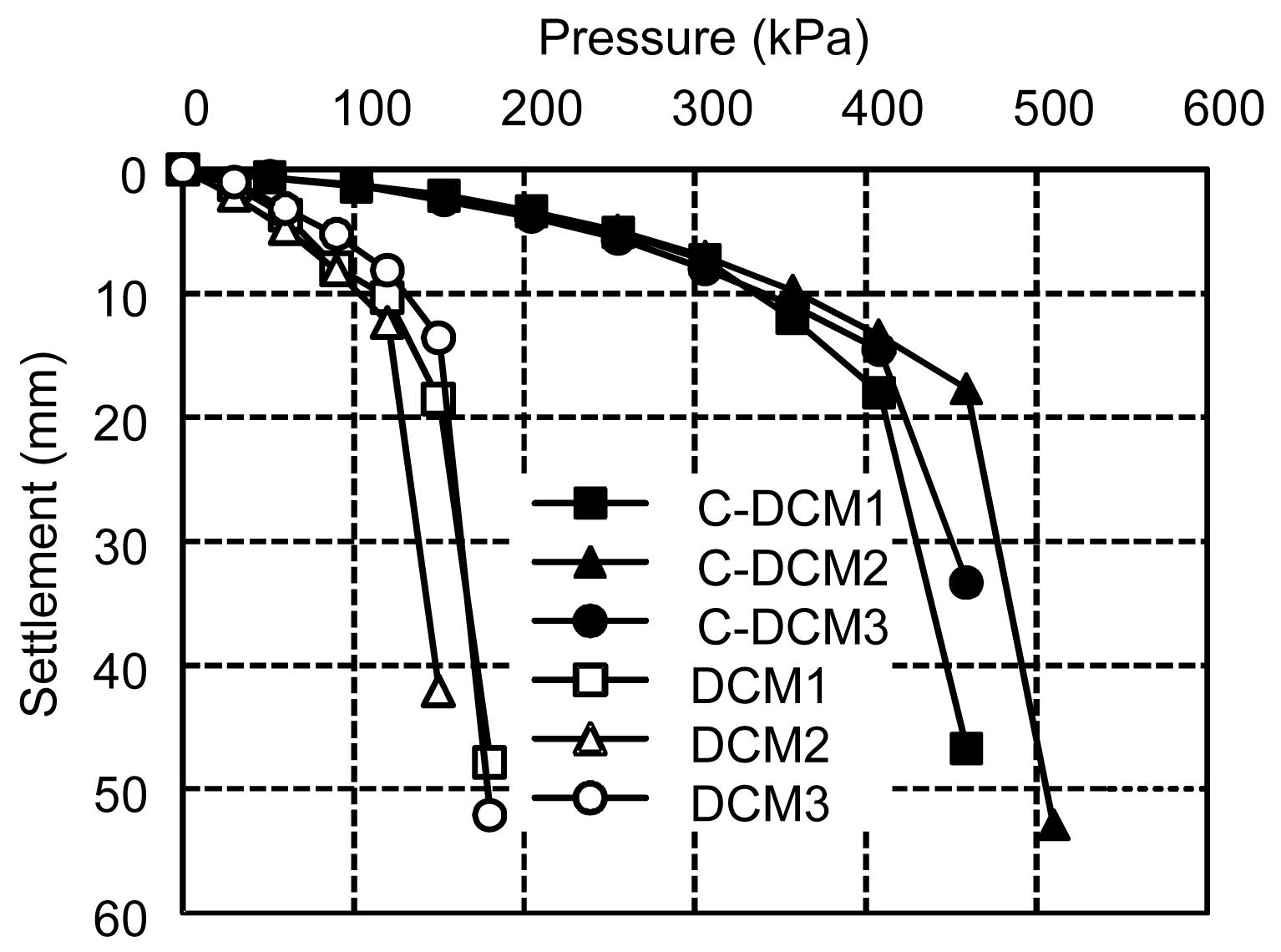 Fig.8
Load sharing ratio of concrete-cored DCM pile composite foundation in Site A (a), Site B (b), and Site C (c), and Site D
During the whole filling process, there is little variation in the load sharing ratio of the DCM column socket, which has a value of 0.2 (Figs. 8a–8c). This indicates the role that the DCM column socket plays in the transfer of shear stress from the precast core pile to the surrounding soil.

The distribution of skin friction between surrounding soil and pile is an important parameter in design (Poorooshasb et al., 1996) and can be discussed from the test results of pile axial force. Fig. 9 shows the axial force of the precast core pile with depth in Site A, Site B, and Site C. It can be seen that the precast core pile stress initially increases and then decreases with depth. This indicates that under a flexible load, such as an embankment, soil settlement at the upper section of a composite foundation is greater than at a pile. Stress of the surrounding soil is transferred to the pile, then at the upper end of the pile negative friction occurs. After reaching a specific depth (approximately 0.3L c in this study), the settlement of the pile body is greater than that of the surrounding soil, therefore the vertical stress of the pile body is transferred to the surrounding soil by means of skin friction. However, in PLT with a rigid load plate, vertical stress of a precast core pile decreases linearly with increasing depth (Dong et al., 2004). Note that the distribution law of skin friction of concrete-cored DCM piles under an embankment is different from that found in the PLT.

Total settlement occurring during the embankment filling process is shown in Fig. 11. With the greatest thickness of soft clay and fill height, greater settlement occurred at Site A than at Sites B and C. By combining the geotechnical grille, the settlement at Site C is the smallest at three concrete-cored DCM pile treatment sites. There is no steep reduction in settlement curves, which demonstrates that the stability of ground during the embankment filling process is expected. 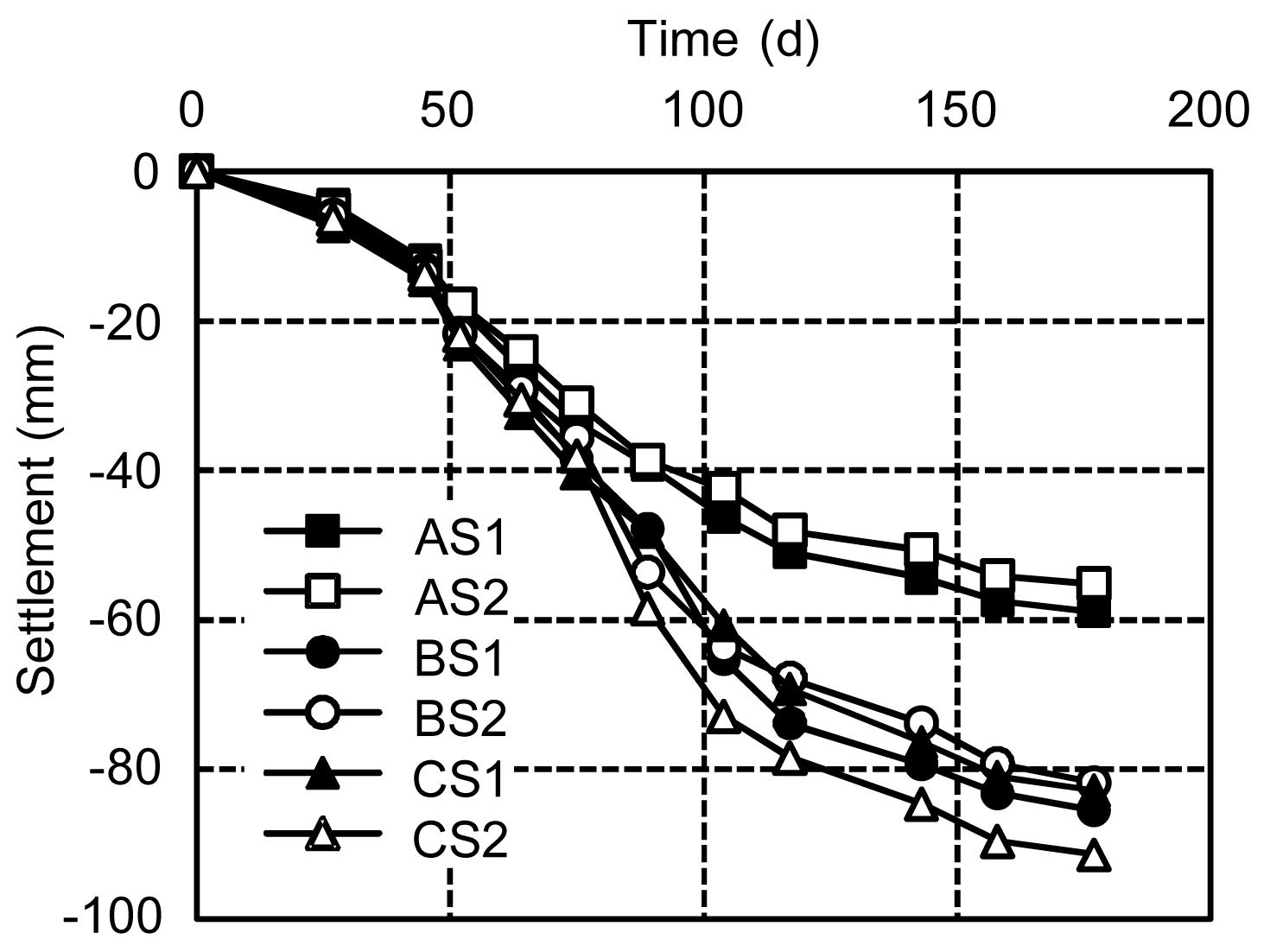 Fig.11
Comparison of settlement between composite ground reinforced by concrete-cored DCM pile and DCM column
With the assumption that the rate of settlement decreases hyperbolically with time after time tA (tA is suggested to be half of the total fill time), the relationship between settlement and time can be given by (Yin et al., 2007) where t is the fill time, St and S ∞ are the settlements at time t and final settlement, respectively, and α is a parameter.

Fig. 13 shows the soil lateral movement with depth below the toe of the embankment at Sites A, B, C, and D. It can be seen that although the embankment was filled to between 3.1 m and 3.6 m, the lateral movement caused by the fill in the concrete-cored DCM pile composite foundation was low. The largest lateral movement of the soft clay layer for Sites A (12.85 mm), B (9.95 mm), and C (12.1 mm) is much less than that for Site D (34.85 mm). The results are consistent with the PLT, load sharing ratio, excess pore pressure and settlement measurements, mainly because of the higher compression modulus and shear strength of precast core piles at Sites A, B, and C. 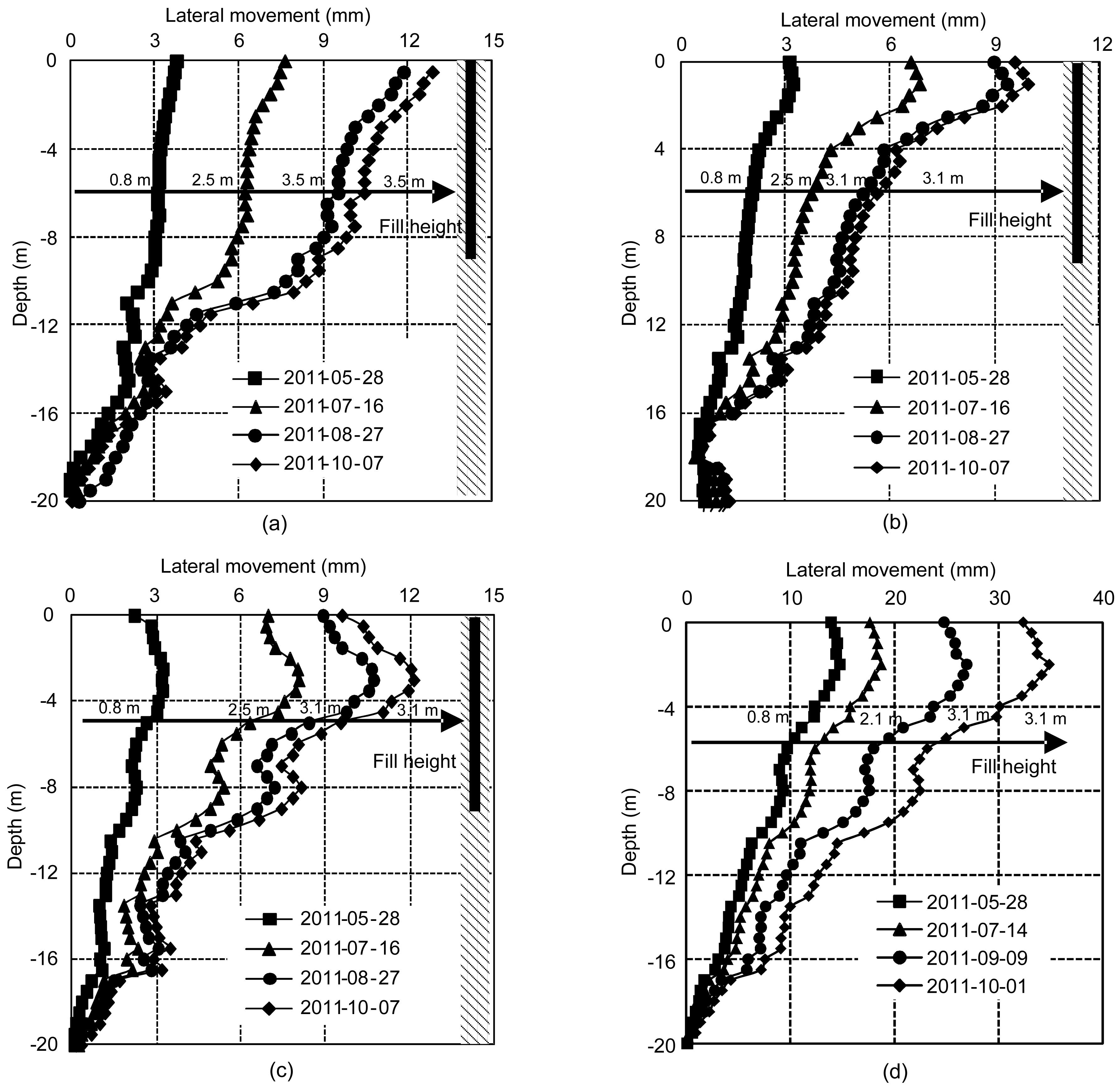 In this study, several field testing programs were conducted to compare ground treatment effect and engineering characteristics of a composite foundation reinforced by a concrete-cored DCM pile and DCM columns. On the basis of field tests results, the following conclusions can be obtained:


*&nbspProject supported by the National Natural Science Foundation of China (No. 41272318), and the State Key Laboratory of Ocean Engineering and Shanghai Leading Academic Discipline Project (No. B208), China