Abstract: One hundred and twenty single-root teeth were selected to evaluate the bonding durability of three different adhesive resin cements to intra-radicular dentin and the effect of ethylenediaminetetraacetic acid (EDTA) irrigation on bonding durability, over six months of water storage. We found that water storage, type of cement, post space pretreatment, and root region were significant factors affecting the push-out bond strength. water storage reduced the bond strength of RelyX Unicem (RU), especially in the apical region (P<0.05). Super Bond C&B (SB) was stronger than the other two cements, sometimes significantly so. The apical region had the lowest bond strength in all circumstances, although the dif-ference was not always statistically significant. Irri-gation with EDTA improved the bond strengths of Panavia F (PF) and RU significantly in each root region (P<0.05). These results showed that water storage decreased the bonding effectiveness of the adhesive resin cements. Irrigation with EDTA after post space preparation was a valuable procedure, especially when used in conjunction with self-etching adhesive or self-adhesive resin cements.

One hundred and twenty single-root teeth were selected to evaluate the bonding durability of three different adhesive resin cements to intra-radicular dentin and the effect of ethylenediaminetetraacetic acid (EDTA) irrigation on bonding durability, over six months of water storage. We found that water storage, type of cement, post space pretreatment, and root region were significant factors affecting the push-out bond strength. Water storage reduced the bond strength of RelyX Unicem (RU), especially in the apical region (P<0.05). Super Bond C&B (SB) was stronger than the other two cements, sometimes significantly so. The apical region had the lowest bond strength in all circumstances, although the difference was not always statistically significant. Irrigation with EDTA improved the bond strengths of Panavia F (PF) and RU significantly in each root region (P<0.05). These results showed that water storage decreased the bonding effectiveness of the adhesive resin cements. Irrigation with EDTA after post space preparation was a valuable procedure, especially when used in conjunction with self-etching adhesive or self-adhesive resin cements.

As most bonding failures occur at the dentin-cement interface rather than at the post-cement interface (Faria e Silva et al., 2007; Radovic et al., 2008), adhesion between the intra-radicular dentin and adhesive resin cements is considered the weak link (Boschian Pest et al., 2002). It is generally accepted that the efficacy of a dentin adhesive depends mostly on the removal of the smear layer and formation of a hybrid layer between the adhesive resin cement and the exposed collagen fibrils within the demineralized dentin (Pashley et al., 1993; Vichi et al., 2002). Adhesive resin cements developed over the past two decades have resulted in improved bond strength, at least when tested shortly after adhesion (Zhang et al., 2008; Bergoli et al., 2012), but the durability of bond strength is equivocal and remains an important issue (Kitasako et al., 2001; Toledano et al., 2007).

Exposure to water is known to degrade dentin bonding (Armstrong et al., 2001). Inadequate infiltration of the adhesive resin cements into wet, hydroxyapatite-depleted collagen may result in incomplete hybridization (Hashimoto et al., 2000). This zone is thought to consist of exposed, unprotected collagen fibrils surrounded by nanometer-sized spaces which permit nanoleakage (Li et al., 2001). The term nanoleakage indicates the uptake of molecules into nanometer-sized spaces present in the hybrid layer in the absence of an interfacial gap. This area may be susceptible to long-term degradation due to the slow hydrolysis of unprotected collagen, reducing the durability of the bond strength.

The purpose of the present study was to evaluate the bonding durability of three different bonding systems: a total-etching adhesive system, Super Bond C&B (SB); a self-etching adhesive system, Panavia F (PF); and a self-adhesive system, RelyX Unicem (RU). The effect of EDTA irrigation on bonding durability in different root regions over six months of water storage was also evaluated. The null hypothesis was that the bond strength would not be affected by water storage, type of adhesive resin cement, EDTA irrigation or root region. 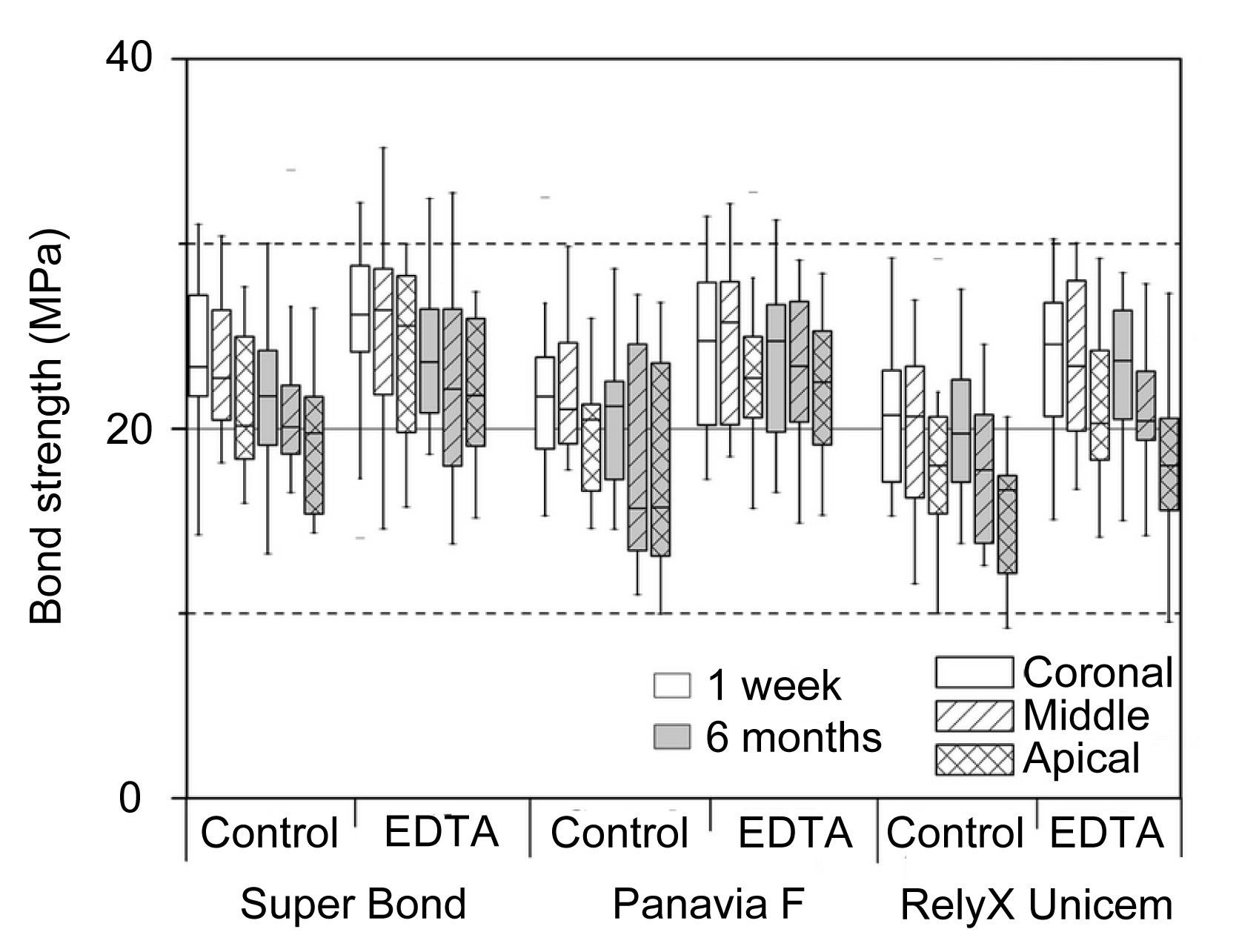 In comparison to the control group, EDTA irrigation produced significantly increased bond strength in the PF and RU subgroups in each root region (P<0.05), and in the apical region in the SB subgroup at one week.

Push-out bond strength decreased after six months of water storage, although differences were not significant, except for RU in the apical region. A decrease in bond strength after extended water storage is believed to result from hydrolysis of the resin and degradation of exposed collagen fibrils in the resin-dentin interdiffusion zone (RDIZ). Hydrolysis is a chemical process which occurs only in the presence of water, and degradation of the collagen fibrils in the RDIZ occurs only when fibrils are exposed to water (Hashimoto et al., 2000; 2003). Incomplete infiltration and hydrolysis of the resin could leave collagen fibrils unprotected and vulnerable, leading to degradation of the collagen fibrils (Hashimoto et al., 2000). Therefore, complete permeation and envelopment of the collagen fibrils is important to protect the adhesion from degradation. The degree of encapsulation partially depends on the type of cement used, as the components of different cements produce variable demineralizing effects. As RU has a low effect on demineralization, a thick smear layer remaining on the intra-radicular dentin may prevent the demineralization and infiltration of the cement. This may explain why only RU showed a significant difference after storage.

Generally, bond strength was affected by the type of cement used. SB showed the highest bond strength. This result may be explained by the use of its activator, which dissolves the thick smear layer and debris on the intra-radicular dentin surface. This process leads to adequate intra-radicular dentin demineralization, so that the resin cement can infiltrate the dentinal tubules and encapsulate the exposed collagen network, forming a thick hybrid layer with a stout micromechanical interlocking of cement and dentin (Yang et al., 2006). In the present study, PF showed higher bond strength than RU, although the two did not differ significantly. Moreover, bond strength did not decrease significantly after six months of water storage. PF is a “mild” self-etching adhesive system in which the smear layer is partially dissolved by the primer, which contains an acidic monomer (Rathke et al., 2007). Therefore, the hybrid layer of PF is a combined structure consisting of resin, collagen fibrils and the remains of the smear layer. The functional monomer 10-methacryloyloxydecyl dihydrogen phosphate (10-MDP) of PF interacts chemically with the hydroxyapatite left around the collagen fibrils within the hybrid layer (Fukegawa et al., 2006). This interaction may help the interfacial polymerization of the cement, and aid the long-term stability of the bond (Inoue et al., 2005).

EDTA irrigation significantly improved both the short- and long-term bond strengths in each root region for PF and RU. This result agrees with the findings of our previous study (Gu et al., 2009). EDTA has been shown to dissolve and eliminate the smear layer and debris (Pérez-Heredia et al., 2006; Gu et al., 2009), leaving the intra-radicular dentin surface with demineralized collaged matrices (Calt and Serper, 2002; Garcia-Godoy et al., 2005). Habelitz et al. (2002) found that EDTA could selectively eliminate hydroxyapatite and non-collagenous protein. Unaltered collagen fibrils are more stable and less affected by dehydration.

In conclusion, the null hypothesis that the bond strength would not be affected by water storage, type of adhesive resin cement, use of EDTA irrigation, or root region is rejected. Water storage may play an important and deleterious role in degradation of bonding effectiveness. Irrigation with EDTA after post space preparation can effectively improve bond strength. Such a procedure is valuable during the post-and-core technique, especially when used with self-etching adhesive or self-adhesive resin cements.

One hundred and twenty sound, human, single-rooted teeth were used in the study. Teeth were extracted for periodontal reasons. Patients ranged in age from 35 to 60 years.

The extracted teeth were stored in 0.1% thymol solution and were used within three months of extraction. Standardized endodontic treatment for all teeth was performed chemo-mechanically, establishing a working length of 0.5–1.00 mm short of the apex. A standardized step-back technique was used, employing k-type files (Dentsply, York, PA, USA) to create root canals of ISO size 60, rinsing intermittently with 0.025 g/ml sodium hypochloride. After drying with paper points (Densply), all roots canals were obturated with a resin sealer (AH plus, DeTrey, Constance, Germany) and gutta-percha points (Dentsply) using lateral condensation.

After storage for two weeks in a freshly mixed thymol solution at 37 °C, the anatomic crown of each tooth was cut at 2 mm incisally to the cement-enamel junction. Post space was prepared with low-speed post drills (Snowpost, Carbotech, Ganges, France) under running water, to a length of 10 mm and a diameter of 1.5 or 1.6 mm depending on the tooth diameter, leaving about 4–5 mm of gutta-percha to preserve the apical seal. Each root was attached to a fiber post of compatible diameter with a drop of sticky wax, and the post was mounted to a paralleling fixture, to ensure that each root was sectioned perpendicularly. A vitric mold was placed centrally below the fixture, and then embedded in self-curing acrylic resin. At the same time, the post space was positioned centrally in the mold. After the resin had cured fully, the fiber post was removed.

The samples were then randomly assigned to two groups of 60 teeth each, according to post space pre-treatment: (1) control group: the root canal dentin was irrigated with deionized water for 60 s; (2) treatment group: irrigation with 14% EDTA for 60 s. All samples were dried lightly with paper points. Each group was then divided into three subgroups of 20 teeth each, according to which adhesive resin cement the group received: (1) a total-etching adhesive system, SB (Sun Medical Co., Ltd., Moriyama City, Japan); (2) a self-etching adhesive system, PF (Batch No. 71127, Kuraray Chemical Co., Ltd., Osaka, Japan); or (3) a self-adhesive system, RU (3M ESPE AG, Neuss, Germany). Each of the adhesive resin cements was applied following the manufacturer’s instructions. After the cements were fully cured, all samples were stored in deionized water at 37 °C until observation. Ten samples of each subgroup were observed after one week and the other ten after six months.

Specimens were serially sectioned transversally from 1 mm below the coronal surface to the apex, using a low-speed diamond saw (Isomet 1000, Buehler, Lake Bluff, IL) under running water as a coolant. From each root, six 1 mm-thick serial slices were obtained: two each of the coronal, middle and apical root sections. Bond strength was evaluated by a push-out test. All slices were tested with the apical surface facing up, using a universal testing machine (Z010/TN2S, Zwick GmbH and Co., Ulm, Germany), at a cross-head speed of 0.5 mm/min. The load was applied in the apical-coronal direction until bond failure, and then the maximum failure load was recorded. The push-out bond strength (σ), expressed as MPa, was calculated according to the formula of σ=F/π(r+R)h, where π is the constant 3.14, r and R represent the radius of the luting cement surfaces on each cut surface of the slice, h represents the height of the slice, and F represents the maximum failure load (Gu et al., 2009).

After the push-out test, the samples were decalcified with 0.35 g/ml phosphoric acid for 30 s and deproteinized with 0.02 g/ml sodium hypochlorite solution for 120 s to observe the fracture interface under the scanning electron microscope (SEM, S-4800; Hitachi, Tokyo, Japan).

The statistical analyses were conducted using SPSS version 16.0 (SPSS Inc., Chicago, IL). The data were verified by the Kolmogorov-Smirnov test for the normal distribution and by Levene’s test for the homogeneity of variances. The push-out bond strength in each group was performed using four-way ANOVA. The dependent variable was push-out bond strength and the main effects were water storage, cement type, post space irrigation, and root region. Multiple comparisons between the groups were performed using Tukey’s test. P-values of ≤0.05 were used as the threshold for significance in all tests.


*&nbspProject supported by the Science and Technology Program of Zhejiang Province (Nos. 2009C33094 and 2013C33126) and the Zhejiang Provincial Natural Science Foundation of China (No. Y2080422)Compliance with ethics guidelines&nbspCai-yun MAO, Jia-jia ZHAO, Wei WANG, and Xin-hua GU declare that they have no conflict of interest.