1. Determination of risperidone in human....2. Evaluation of efficacy of resin....3. Relative bioavailability and....4. Theory and techniques for....5. Identification and determination of....6. Effect of compatible herbs on the....7. Pharmacokinetic comparison of....8. In vitro antioxidant activity of....9. Comparative metabolomics provides....10. Cytotoxicity and enhancement activity....

Abstract: A rapid, reliable, and sensitive method was developed using ultra-performance liquid chromatography-tandem mass spectrometry (UPLC-MS/MS) with an electrospray ionization (ESI) source for determination of seven bioactive compounds in rat plasma after oral administration of Ginkgo biloba tablets (GBTs). The method simultaneously detects bilobalide (BB), ginkgolide A (GA), ginkgolide B (GB), ginkgolide C (GC), quercetin (QCT), kaempferol (KMF), and isorhamnetin (ISR) for pharmacokinetic study. The analytes and internal standard (IS) were extracted from rat plasma by acetidin. An MS/MS detection was conducted using multiple reaction monitoring (MRM) and operating in the negative ionization mode. The calibration curve ranges were 5–500, 5–500, 2.5–250, 1–100, 1–100, 1–100, and 1–100 ng/ml for BB, GA, GB, GC, QCT, KMF, and ISR, respectively. The mean recovery of the analytes ranged from 68.11% to 84.42%. The intra- and inter-day precisions were in the range of 2.33%–9.86% and the accuracies were between 87.67% and 108.37%. The method was used successfully in a pharmacokinetic study of GBTs. The pharmacokinetic parameters of seven compounds were analyzed using a non-compartment model. Plasma concentrations of the seven compounds were determined up to 48 h after administration, and their pharmacokinetic parameters were in agreement with previous studies.

Products of Ginkgo biloba leaf extracts are used routinely in prescription drugs and dietary supplements in many countries. They play an important role in treating cardiovascular diseases and neurological disorders (Diamond et al., 2000). Many dosage forms of G. biloba leaf extracts have been documented in Chinese Pharmacopoeia (Chinese Pharmacopoeia Commission, 2010), such as tablets, capsules, and dripping pills. Ginkgo biloba tablets (GBTs) have been used for the clinical treatment of many conditions and diseases, such as stroke (Loh et al., 2006; Zhang et al., 2012), Alzheimer’s disease (Stackman et al., 2003), and cardiac angina (Xu and Xu, 2011).

Recent studies have used various methods to determine the components of G. biloba extracts. Chen et al. (2010) and Hu et al. (2010) developed a high-performance liquid chromatography (HPLC)-ultra violet (UV) method to study the pharmacokinetics of QCT, KMF, and ISR in rat plasma. However, these studies could identify only the flavonol components. The HPLC-UV method is also not sensitive enough to apply to pharmacokinetic studies at clinical equivalent doses. Liquid chromatography-mass spectrometry (LC-MS) is an effective solution for complex matrix samples and is often used to study pharmacokinetics because of its high sensitivity and specificity. Xie et al. (2008) and Jin et al. (2011) successfully used an HPLC-tandem mass spectrometry (MS/MS) method to study the pharmacokinetics of terpene lactones. However, most methods usually focus only on flavonoid compounds or terpene lactones separately. Zhao et al. (2008) and Wu et al. (2013) reported that HPLC-MS/MS can be applied to the simultaneous determination of flavonoids and terpene lactones in vivo.

To depict the pharmacokinetic profiles of the main bioactive ingredients comprehensively, it is very important to develop a rapid and sensitive analytical method to quantify multiple components of GBTs in biological matrices. In this study, we aimed to develop an ultra-performance liquid chromatography (UPLC)-MS/MS method to quantify seven bioactive compounds simultaneously in rat plasma to evaluate their pharmacokinetic properties after a single oral administration of GBTs. 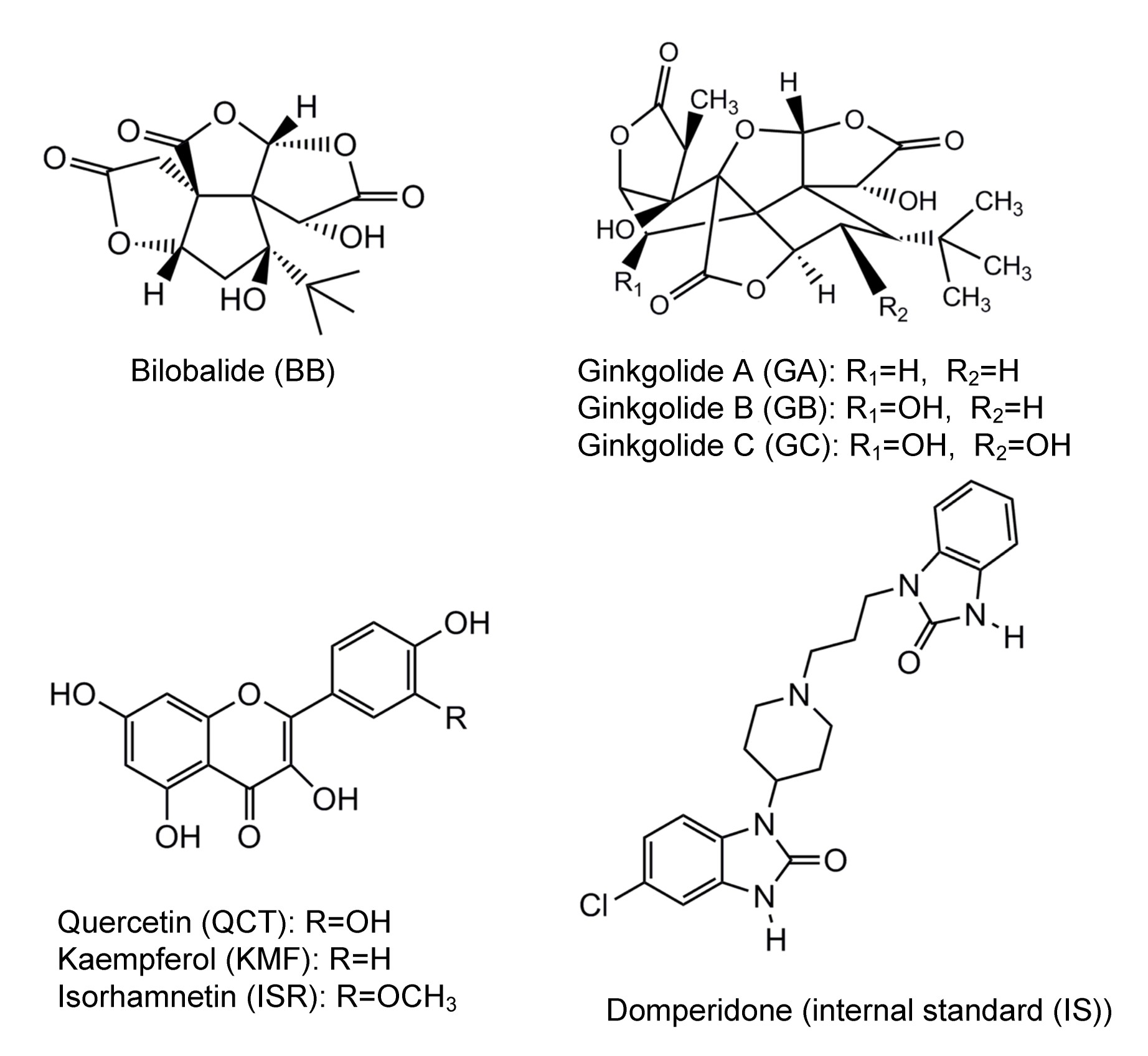 Contents of the major components in each Ginkgo biloba tablet (GBT) and dosage administered to each rat
The terpene lactones and flavonols in GBT were quantitated by HPLC-ELSD and HPLC-UV, respectively

Sprague-Dawley male rats (SPF (Beijing) Laboratory Animal Technology Co., Ltd., China) weighing (300±10) g were used. All experiments were carried out according to the guidelines of the Animal Care and Use Committee of Beijing University of Chinese Medicine, China. Before the experiment, all rats were acclimatized to the conditions of the laboratory over one week.

A liquid-liquid extraction method was used to extract all the plasma samples. To an aliquot of 100 μl of plasma, the same volume of 4 mol/L hydrochloric acid was added and vortexed for 3 min. The mixture was then hydrolyzed in a water bath at 80 °C for 30 min; afterwards, 1.0 ml acetidin was added to the hydrolyzed and cooled sample, followed by vortexing for 3 min. After centrifugation at 10 000 r/min for 10 min, the 800 μl supernatant was transferred to a clean centrifuge tube and evaporated to dryness under a gentle stream of nitrogen. The residue was reconstituted in 100 μl methanol, followed by centrifugation at 10 000 r/m for 10 min; finally, an aliquot of 3 μl of the solution was injected into the UPLC-MS/MS system for analysis.

2.5.  Preparation of reference solutions and samples for QC

Reference compounds were accurately weighed and dissolved in methanol to produce stock solutions. The concentrations of BB, GA, GB, GC, QCT, KMF, and ISR were 102, 96.0, 93.0, 69.0, 73.0, 26.0, and 27.0 μg/ml, respectively. Seven different concentrations of a standard working solution of all analytes were obtained by diluting the solutions with methanol. All solutions were stored at 4 °C and then brought back to room temperature before use. A calibration standard at the seven different concentrations was obtained by spiking 100 μl of the standard working solutions and 50 μl of the IS solution (20 ng/ml) with 100 μl blank rat plasma. For method validation, samples for QC were prepared in the same way.

Chromatograms of the IS at the lowest limit of quantification (LLOQ), blank rat plasma from six sources, blank plasma spiked with the analytes, and plasma samples after oral administration were compared to investigate the specificity and selectivity of the method.

For testing the stability of the analytes in rat plasma, the same concentrations of the following stored and freshly prepared samples were compared. Analysis of the extracted samples, stored for 4 h maintained at room temperature, was used to determine their short-term stability. To determine the stability of samples in the autosampler, the extracted samples were analyzed after being left in the autosampler at 10 °C for 8 h. Freeze and thaw stability was determined by subjecting the QC samples to three cycles of freezing at −20 °C for 12 h and thawing at room temperature for 2 h. 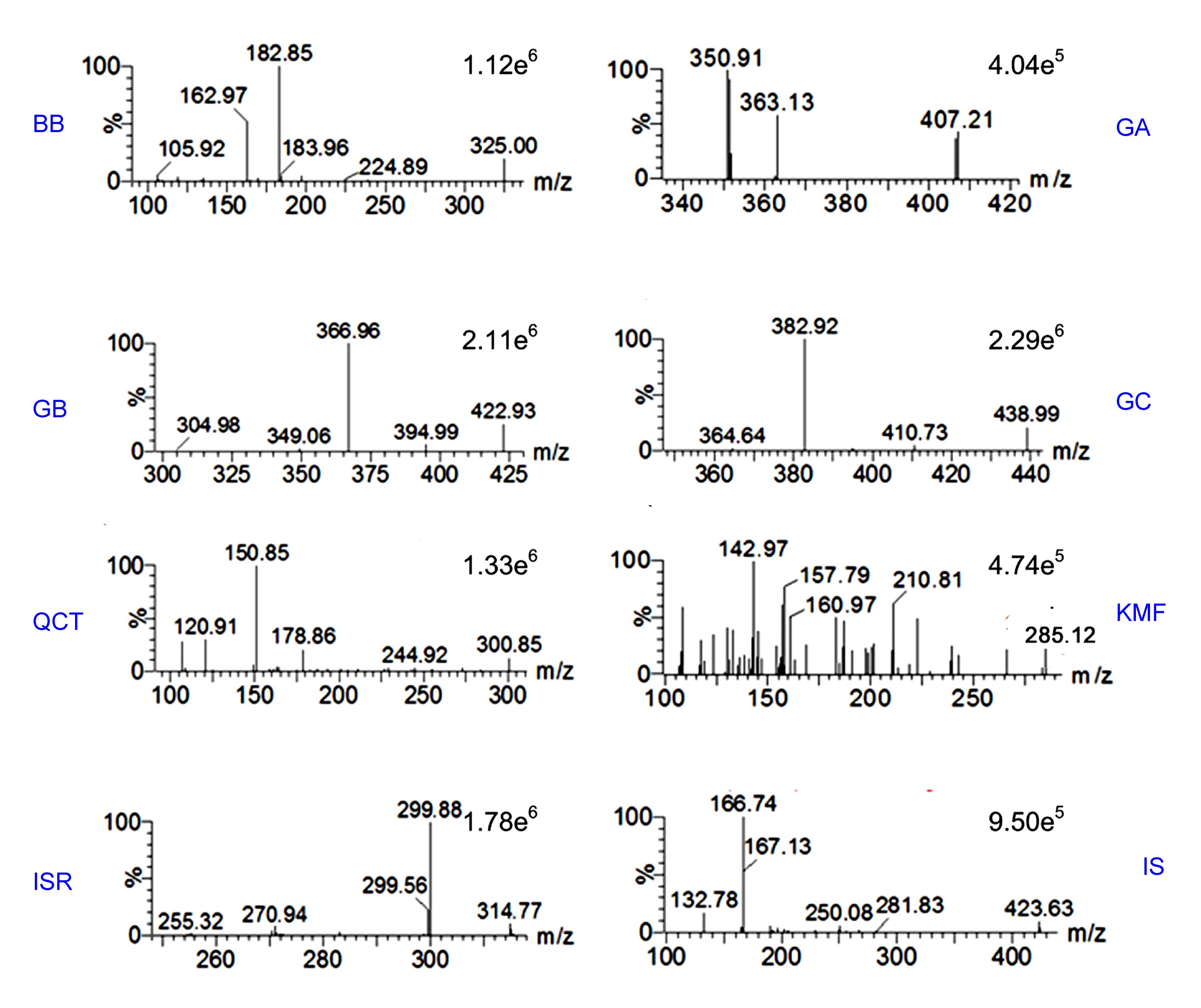 Fig.2
Daughter ion mass spectra of the analytes in GBTs and the internal standard (IS)
BB: bilobalide; GA: ginkgolide A; GB: ginkgolide B; GC: ginkgolide C; QCT: quercetin; KMF: kaempferol; ISR: isorhamnetin
To optimize sample preparation, protein precipitation and liquid-liquid extraction methods were tested in our study. Using protein precipitation by methanol and acetonitrile, the recovery of four ginkgolides was not satisfactory. Therefore, we tested a liquid-liquid extraction method and acetidin was proved suitable for extracting all analytes from rat plasma. Chandra et al. (2011) reported that ginkgo flavonoids include flavonols and their glycosides. Some studies have shown that flavonoid glycosides can be absorbed in the intestine by bacteria to facilitate absorption (Bokkenheuser et al., 1987; Kim et al., 1998; Wu et al., 2013). However, other studies have shown that flavonoids exist as aglycones, glucuronic acid conjugates, and sulfonic acid conjugates in plasma (Manach et al., 1996; Yodogawa et al., 2003; Silberberg et al., 2005). So the plasma samples should be acid hydrolytic to transform conjugates to aglycones.

Under the UPLC-MS/MS conditions, a specific voltage at the optimum value was set to obtain the best sensitivity and specificity for each analyte (Fig. 3). No obvious endogenous interference was observed and a good separation of the analytes was achieved. The chromatographic peaks were at the retention time of 2.07, 2.20, 2.76, 2.78, 2.22, 3.61, 2.66, and 3.51 min for GC, IS, GB, GA, BB, ISR, QCT, and KMF, respectively.

3.2.2.  Linearities of calibration curves and the lowest limit of quantification (LLOQ)

Precision and accuracy for the analytes in rat plasma

Stability of the analytes in rat plasma

The UPLC-ESI-MS/MS method was successfully applied to the pharmacokinetic study of GA, BB, GB, GC, QCT, KMF, and ISR in rat plasma after oral administration of GBTs. The mean plasma concentration-time profiles of the terpene lactones and the flavonols in rats after a single oral dose of GBTs are shown in Figs. 4 and 5, respectively. The pharmacokinetic parameters are shown in Tables 7 and 8. Note that there were marked differences between the pharmacokinetic behavior of terpene lactones and flavonols. After oral administration of GBTs, terpene lactones were eliminated faster than flavonols. This is consistent with Chen et al. (2013). Moreover, the flavonols presented double peaks in curves of mean plasma concentration. This phenomenon was also reported previously and indicates that these components might have enterohepatic recirculation (Tang et al., 2009; Chen et al., 2010). 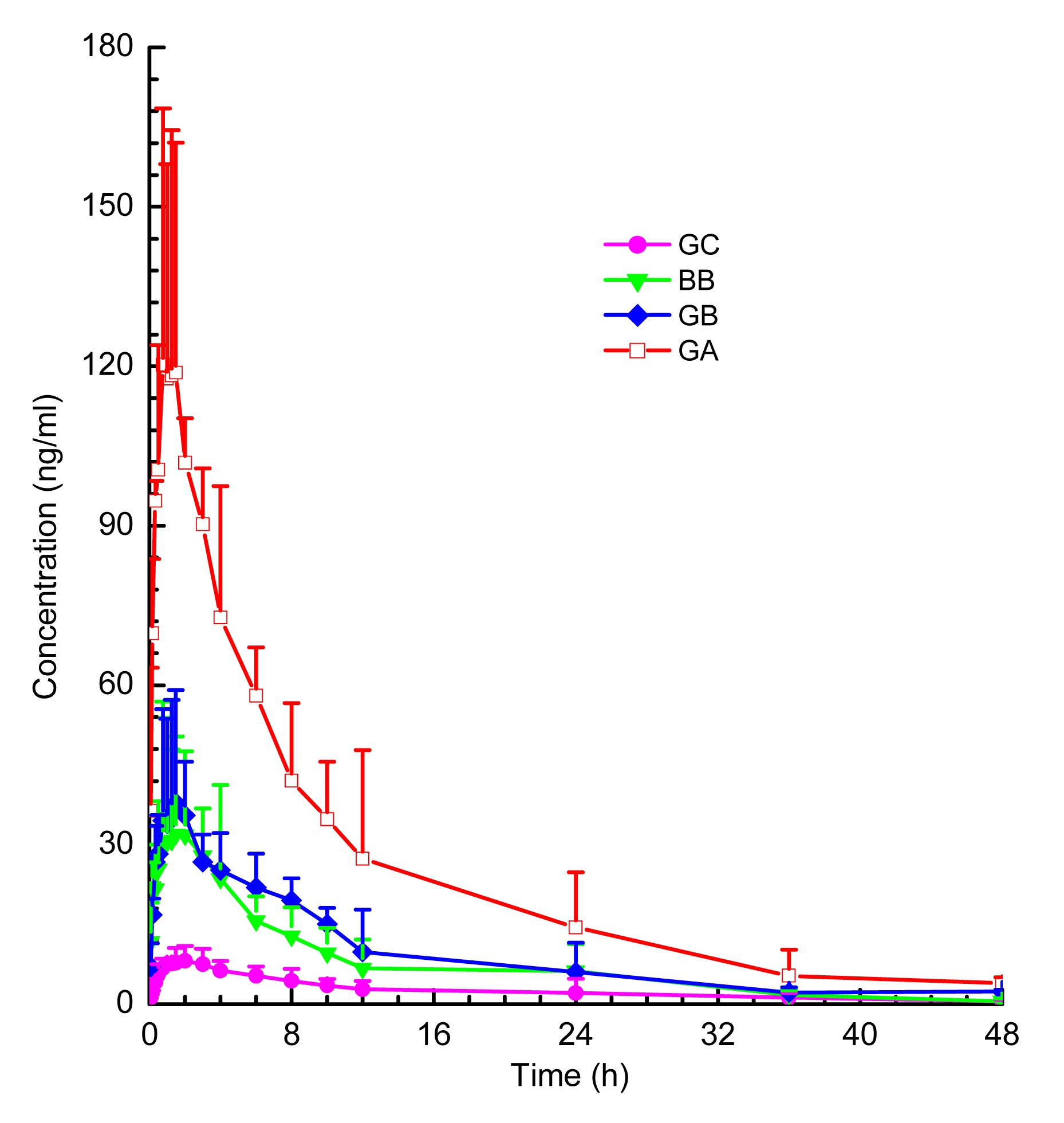 Fig.4
Plasma concentration-time profiles of bilobalide (BB), ginkgolide A (GA), ginkgolide B (GB), and ginkgolide C (GC) in rats after a single oral dose of GBTs
Data are presented as mean±SD, n=5 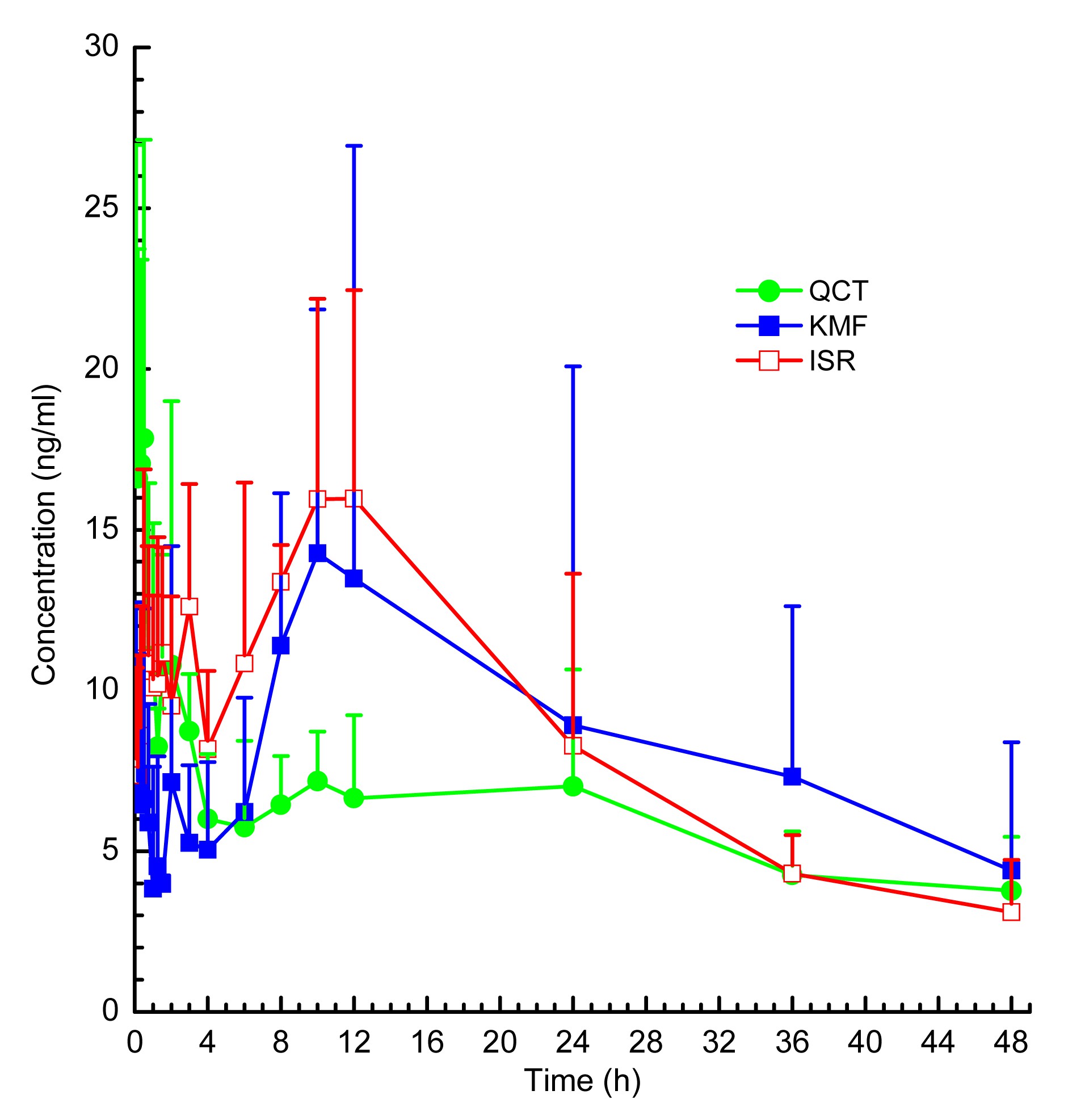 Pharmacokinetic parameters of QCT, KMF, and ISR following a single oral administration of GBTs to rats

In this study, a UPLC-ESI-MS/MS method was developed and validated for simultaneous quantification of plasma concentrations of BB, GA, GB, GC, QCT, KMF, and ISR. A simple and high recovery extraction method was carried out for sample pretreatment. Moreover, no interference was found between endogenous substances and the analytes. The developed method has proven to be very sensitive and reliable, and offers shorter analysis time over existing methods, with a single run taking only 4 min. In conclusion, the established UPLC-ESI-MS/MS method demonstrated good performance including specificity, linearity, detection and quantification limits, precision and accuracy, and was successfully used to quantify the seven bioactive compounds in rat plasma to support pharmacokinetic studies.

[7] Deng, F., Zito, S.W., 2003. Development and validation of a gas chromatographic-mass spectrometric method for simultaneous identification and quantification of marker compounds including bilobalide, ginkgolides and flavonoids in L. extract and pharmaceutical preparations. J Chromatogr A, 986(1):121-127.

[19] Tang, D.Q., Yin, X.X., Zhang, Z.J., 2009. Gradient HPLC-DAD for the simultaneous determination of five flavonoids in plasma after intravenously administrated extract and its application in the study of pharmacokinetics in rats. J Liquid Chromatogr Rel Technol, 32(14):2065-2079.