Abstract: We solve the problem of petroleum products distribution through oil pipelines networks. This problem is modelled and solved using two techniques: A heuristic method like a multiobjective evolutionary algorithm and Mathematical Programming. In the multiobjective evolutionary algorithm, several objective functions are defined to express the goals of the solutions as well as the preferences among them. Some constraints are included as hard objective functions and some are evaluated through a repairing function to avoid infeasible solutions. In the Mathematical Programming approach the multiobjective optimization is solved using the Constraint Method in Mixed Integer Linear Programming. Some constraints of the mathematical model are nonlinear, so they are linearized. The results obtained with both methods for one concrete network are presented. They are compared with a hybrid solution, where we use the results obtained by Mathematical Programming as the seed of the evolutionary algorithm.

Polyducts are pipeline networks designed to transport oil derived products. Unlike conventional pipelines, which transport only crude oil, polyducts transport a great variety of fuels treated in refineries: kerosene, naphthas, gas oil, etc. Transport is carried out in successive packages as shown in Fig.1. A package is a changeable quantity of the same product class located along a polyduct. A long polyduct can contain four or five different products each occupying respective extensions along its route. The entry points and supply sources of the polyducts usually receive products directly from refineries or ports where ships coming from refineries unload. The delivery points are receipt terminals or intermediate stations with storage tanks located along the route. Providing that certain constraints are fulfilled in the package arrangement, the mixing of successive products affects only a minimal fraction, and the mixed products can be recovered as low quality product.

The polyducts in a specific geographical area (region, country, etc.) are interlinked to form polyduct pipelines. To move the products, pumps are distributed strategically along the network. From an operative point of view, a polyduct network will be constituted by a set of nodes with storage capacity, and a set of edges (the polyducts) which interconnect the nodes. The edges are mostly unidirectional, but for reasons of operative flexibility, there can also be bidirectional edges. The network topology can be very varied, depending on the oil activity and geographical region conditions. The nodes, in general, will have the capacity to supply, store and receive products (De la Cruz et al., 2004).

On a logistic level, the problem of polyduct pipelines is to plan the way different products are temporarily transported from source nodes to demand nodes, passing through intermediate nodes. Planning must satisfy a set of temporary constraints, related to the minimum and maximum dates for the delivery of different products. Also, constraints related to the products at the sources availability must be dealt with and the proper physical conditions after network utilization must be satisfied. The quality of the solutions to these problems is usually measured in terms of minimization of planning time, and the appropriate arrangement of the successive packages to obtain interfaces without mixing. This quality measurement is usually formulated as a multiobjective function of an optimization problem (Chankong and Haimes, 1983). The storage capacity of the intermediate nodes can be used as a strategic element in dealing with temporary constraints and the optimization of the overall objective function. For example, a product that must be transported from a distant supply source to a final node through an edge that is being used at the time for another shipment is sent to an intermediate node, and then resumes its journey to its destination as soon as the mentioned edge is free.

In this paper we present a solution to a simplified problem of the optimal distribution of products through pipeline networks using two methods, namely, Multiobjective Evolutionary Algorithm (MOEA) (Goldberg, 1989; Michalewicz, 1995) and Mixed Integer Linear Programming (MILP) (Marriott and Stuckey, 1998; Bazaraa et al., 1990). In Section 2 we study the model of the problem. In Sections 3 and 4 the model representation is given in MOEA and MILP, respectively. An example is solved and compared with a hybrid solution in Section 5. The conclusions are stated in Section 6.

.  MODEL OF THE NETWORK

We consider a simplified model of an actual network. The network has a set of nodes made up of a set of sources, a set of sinks or receiving terminals, such as delivery points or storage terminals, and a set of intermediate connections serving as receiving and delivering points with storage capacity.

We also assume that all packages flow with the same speed and that they occupy a similar volume in the polyduct. If two packages of different fluids follow one another there exists the possibility of both products becoming contaminated. In a number of polyducts the fluids may flow in both directions from one node to the other. One of the studied networks can be seen in Fig.2. This network has two sources (N1 and N2), three sinks (N5, N6 and N7) and two intermediate nodes (N3 and N4). In the polyduct joining nodes N3 and N4 the fluid can flow in both directions. Numbers in links joining two nodes give the normalized distance in terms of units of time needed by a given package to cover the whole polyduct. For instance, number 7 in the polyduct linking nodes N3 and N6 means that one package spends seven periods of unit time to go from node N3 to node N6, or that the polyduct may contain seven packets. 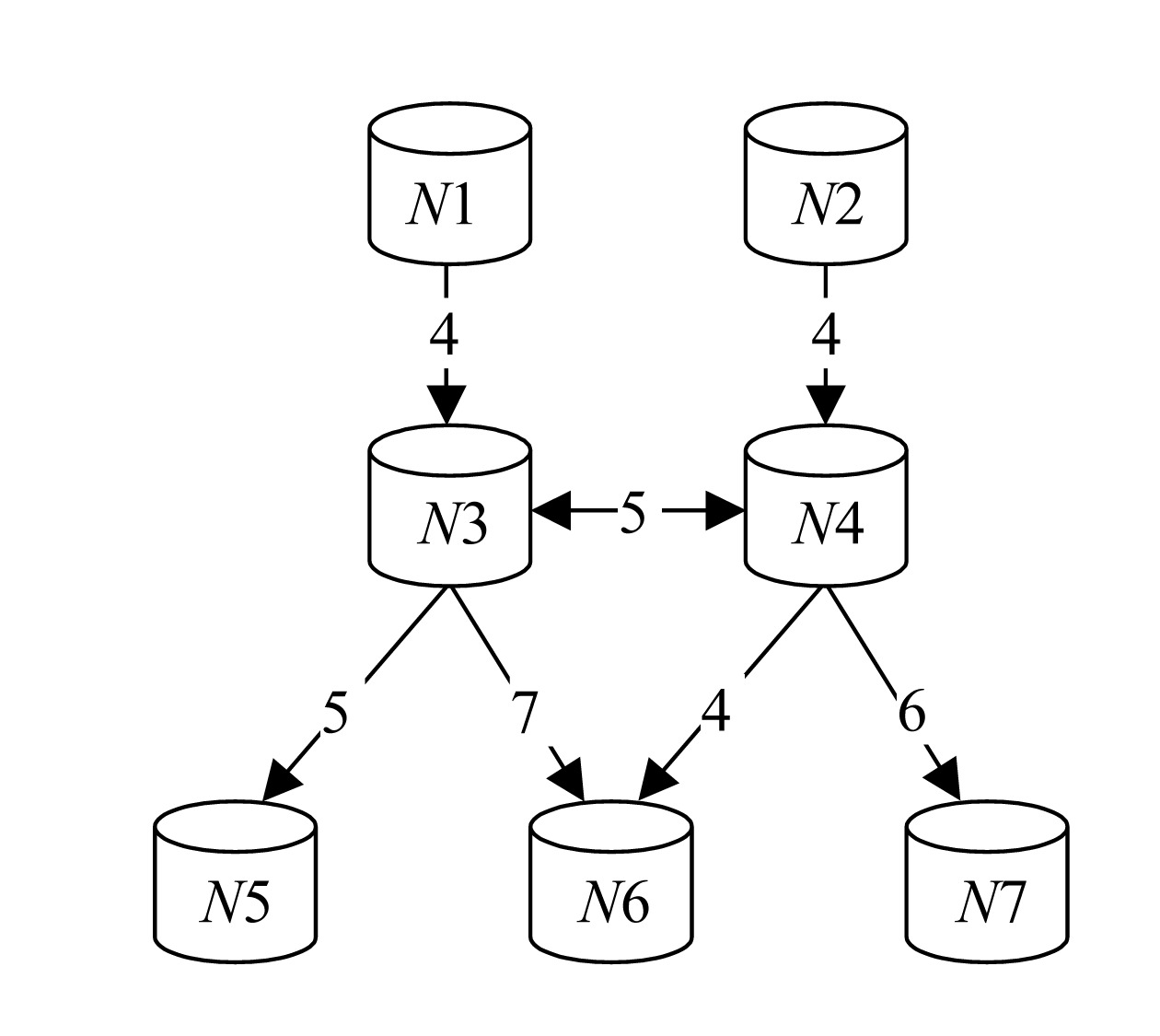 To code the topology of the network we use a matrix having as entries the distance among the nodes (Botros et al., 2004). An entry of zero means there is no connection between these nodes. A connection is represented as a pair (i, j) where i is the output node and j the input node. A bidirectional links is acknowledge because we have a pair of symmetric connections (i, j) and (j, i).

A solution to the problem is given by the kind of packet sent by every source or interconnection node at every instant (De la Cruz et al., 2003). To code a solution we use a matrix to represent the population, with a row for every individual as shown in Fig.3. For each individual the first n elements store the types of package units sent through the n connections in the first instant of time, the following n elements the types of package units sent during the second instant of time, and so on.

Fig.3
Vector solution coding
However, this codification does not necessarily fulfil the problem statement conditions yet, because the product type produced for each source could be different, and all the elements in the row vector solution are in the range [0, number of product types]. The easiest way to handle this aspect of the problem is to code, for each source, the types of oils from 1 to the number of different oils sent by that source (leaving the 0 for the case of not sending any product at that instant of time). This coding will not overload the genetic operators and the real type of oil coded in the individual must be obtained, before evaluating the individuals to obtain their fitness, by means of the ProductType variable.

This information coding can be kept easily in a structure where every row is a cell associated with a node, and within every row, there are as many columns as connections departing from this node. So the value of the gene acts as entry to get the product associated with it. In Matlab notation the representation of this information is as follows:

With this representation the products associated with the genes of the first node are:

and those of the second node are

For the generating process, we can build a mask in order to keep each gene of our individual structure (type of package sent by each connection in each time instant) in its corresponding value range. An example is given in Table 1, where Mask is a vector which contains in each entry the number of different products that can be sent by each connection.

Mask (grey colour) needed for the mapping process
Then, if we have Nind=20 individuals (with 8 connections and 15 time instants) we can use the mask to generate the initial population as follows (using Matlab notation):

Now, we explain the genetic operators used in the reproduction process:

A uniform cross point function is used to select randomly the crossover points for each pair of individuals of two genetic populations. The crossing points CROSS POINTS are returned in a numeric matrix of 0 and 1 with as many rows as pair of individuals and columns as number of genes. The crossing points are identified as the points where there is a change from 0 to 1 and from 1 to 0. So, if the number of crossing points is n, each row has n+1 string of continuous values (0 or 1). Fig.4 is a schematic of such cross method with n=5. In our case we adopted n=2.

Again we can use the mask to implement the mutation operator. Continuing with the above example the implementation of this operator with Matlab notation is: