1. Simple PSF based method for pupil....2. Robust design and optimization for....3. Power duality for multi-antenna OFDM....4. Research on new type of fast-opening....5. Centralized and distributed resource....6. Coordination of PSS and TCSC....7. A multi-modular shunt active power....8. Adaptive modulation MIMO system based....9. Design and analysis of an underwater....10. Strain transfer of surface-bonded....

Abstract: The optimization design of the power system is essential for stratospheric airships with paradoxical requirements of high reliability and low weight. The methodology of orthogonal experiment is presented to deal with the problem of the optimization design of the airship’s power system. Mathematical models of the solar array, regenerative fuel cell, and power management subsystem (PMS) are presented. The basic theory of the method of orthogonal experiment is discussed, and the selection of factors and levels of the experiment and the choice of the evaluation function are also revealed. The proposed methodology is validated in the optimization design of the power system of the ZhiYuan-2 stratospheric airship. Results show that the optimal configuration is easily obtained through this methodology. Furthermore, the optimal configuration and three sub-optimal configurations are in the Pareto frontier of the design space. Sensitivity analyses for the weight and reliability of the airship’s power system are presented.

The stratospheric airship is an aerostat designed to fly at stratosphere, at nearly 20 km altitude. It has the ability of fixed-point suspension and can be maneuvered in wind speeds of 30 m/s. It can stay in the stratosphere for a long period of time. The stratospheric airship has many merits such as high cost-effectiveness, good mobility and viability, long endurance, and ease of update and maintenance. It can play a significant role in many fields, for example, the command and control of battlefield, data and communications relay, real-time tracking, surveillance and reconnaissance, border patrol, etc.

2.  Airship’s power system and its reliability and weight model

The power system of an airship consists of all of the components that collect, generate, and store energy and convert that energy into useable power. A baseline power system is a photovoltaic/regenerative fuel cell system. The typical power system is shown in Fig. 1. It includes the thin-film solar array (SA), the regenerative hydrogen-oxygen fuel cell (RFC), and the power management subsystem (PMS). 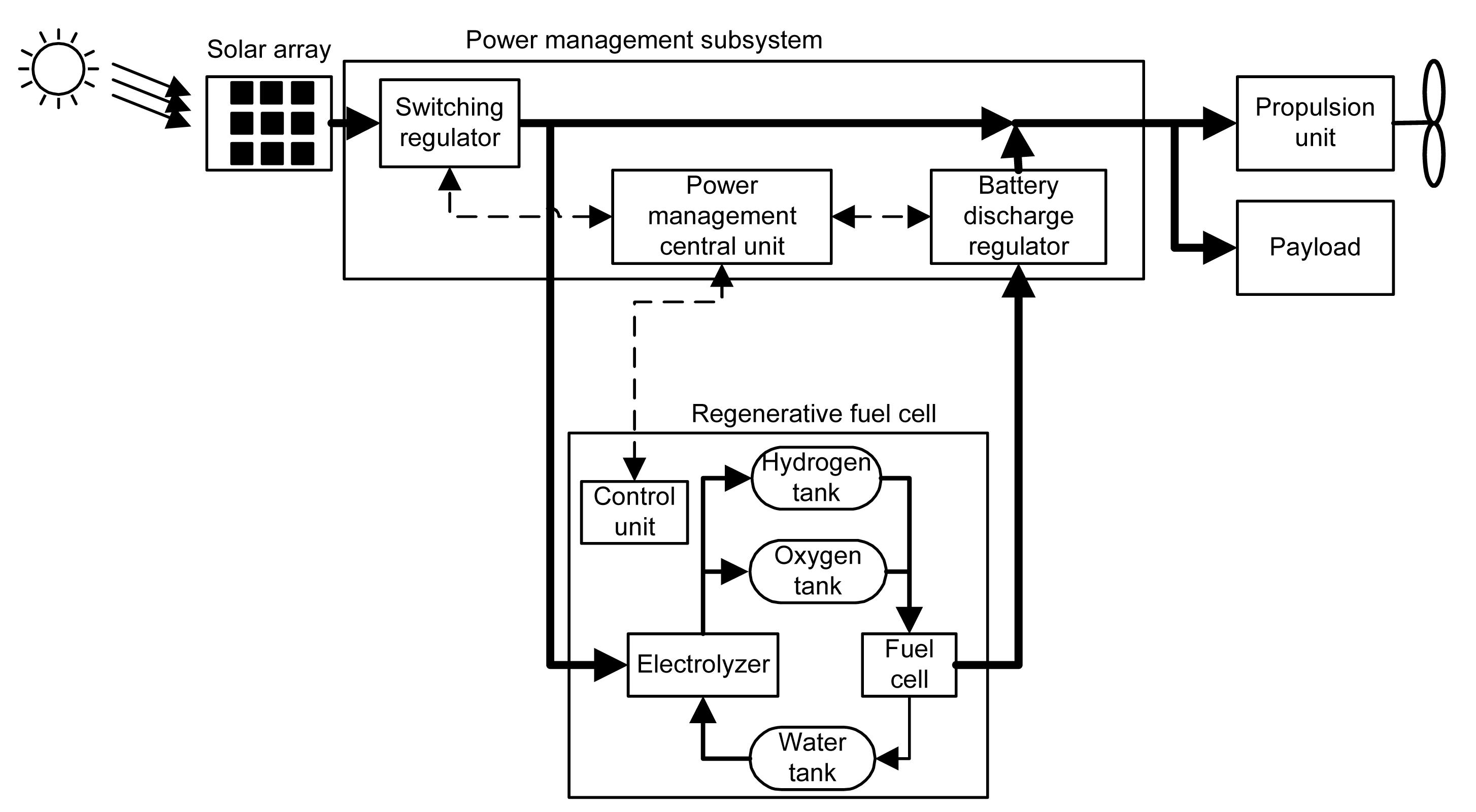 The PMS consists of a switching regulator (SR), a battery discharging regulator (BDR), and a power management central unit (PMCU). The output voltage of the solar cell array is regulated by the SR. BDR performs as a DC/DC converter when transforming the fuel cell’s voltage to the bus’s voltage. PMCU supervises and coordinates the running state of the SR, RFC and BDR to maintain the continuous operation of the power system.

To generate the electrical power required by the payloads of the airship, solar cells are usually firstly connected in series to form a string to obtain the desired voltage and then the individual strings are connected in parallel to form an array to produce the desired current. For the convenience of analysis, it is assumed that there are m solar cells in one string and n+k strings in one solar array, where n represents the quantity of minimum strings and k represents the quantity of redundant strings in the solar array.

The weight model of SA is given as where A SA is the area of SA, σ SC is the specific weight of SA, and m SC1 is the additional weight of SA for fixing and power transmission.

RFC includes two subsystems: the fuel cell and the elctrolyzer. It consists of a fuel cell stack, an electrolyzer unit, reactant tanks, valves, regulators, filters, pipes, sensors and a controller. To minimize the complexity of the development and keep good maintainability, module rating technique is usually used in the design of RFC (Martin et al., 1984). In this study, it is assumed that there are p+q modules in an RFC in which p modules are minimally required and q modules are redundancy. The formula for calculating the weight of RFC is shown as follows: where σ FC is the specific weight of fuel cell.

The reliability of a shunt regulating circuit of SR is shown as follows:

The method of parallel redundancy is usually applied in SR to improve the reliability. In this regard, the calculation of the weight is given in Eq. (8). It is assumed that the additional weight of SR which includes the weight of the supporting frame, wire and plug only increases 20% for the utilization of the existing spare space which partially saves the weight of the fixing structure and electrical wires.

As each shunt regulating circuit connects to one solar cell string, the total reliability of the solar array and the shunt regulator is

BDR performs the function of converting the RFC’s energy to bus energy. The quantity of BDR modules configured in the power management system is just equal to the quantity of RFC modules. The weight and reliability model of BDR is similar to the model of SR, i.e., where y is the quantity of components in one BDR module, and m BDR1 is the additional weight for the fixing structure and electrical wires.

BDR usually uses the method of parallel redundancy to improve reliability. Thus, the weight and reliability model of BDR is shown as follows. In Eq. (14), the additional weight of BDR increases 40% due to the utilization of the existing spare space which partially saves the weight of the fixing structure and electrical wires.

2.4.3.  Reliability and weight model of PMCU

In this study, it is assumed that a single PMCU has the fixed weight of m PMCU. The reliability of the PMCU is calculated as follows: where z is the quantity of components in PMCU.

If PMCU is paralleled, it has the weight of 1.8m PMCU. The following equation should be used to calculate the reliability of PMCU:

2.5.  Reliability and weight model of the power system

The formula of weight calculation for the power system is given in Eq. (20), which is the sum of the weights of SA, RFC, SR, BDR and PMCU.

The reliability of the power system can be calculated by

3.1.  Outline of the methodology

Based on the theory of probability and mathematical statistics, the methodology of orthogonal experiment (Montgomery, 2007; Ren, 2009) is suitable for solving the optimization problem with multi-factors and multi-response variables. The essentials in the methodology of orthogonal experiment are factors, levels, and responses. The factors are the elements which affect the response; the levels are the states of the factor. The change of the level of each factor can bring about the change of the response.

The flow chart of the methodology of orthogonal experiment is shown in Fig. 2. The third and fourth steps are important in practice. Once the factors are selected, the ranges over which these factors vary should be chosen and the specific levels at which the factors run will be made. The suitable orthogonal table or orthogonal array should be selected according to the levels of all factors which have been selected previously.

Fractional content of orthogonal array of L 64(89)
In this study, two responses of weight and reliability of the power system are selected for the optimization problem. The step of performing the experiment and measuring the response is replaced by estimating the weight and reliability index through the mathematical model previously depicted in section 2.

3.2.  Factors and levels of the power system

As mentioned above, there are three subsystems in the power system. With different redundant measures applied in each subsystem, the weight and reliability of every subsystem vary; so does the power system. The selected factors and levels are shown in Table 2.

Factors and levels of the airship’s power system
To improve the reliability of SA, paralleled redundant cell strings are usually set. With the increase of redundant strings, the weight and reliability are also increased. Hence, the quantity of redundant strings is chosen as a factor. Eight levels, i.e., from zero to seven, are selected for analysis in which zero represents no redundancy.

In the optimization problem of the airship’s power system, low weight and high reliability are equally expected and share the same importance. Hence, αk assumes the same value of one for both responses. As shown in the next section, the reliability ranges from 0 to 1 while the weight ranges from 7800 to 33 000 kg. For a correct comparison of the two responses on the same level, the reliability should be magnified and the weight should be reduced. The evaluation function is given as where yi 1 and yi 2 denote the response of reliability and weight, respectively.

The proposed optimization method is used in the power system design of ZY-2 stratospheric airship. The ZY-2 airship is an aerostat designed to fly at an altitude of 20 000 m and latitude of 35° north. It has an ellipsoidal shape with a total length of nearly 164 m and a radius of nearly 25.4 m. The total mass of the airship is about 15 056.47 kg and the maximum weight of 9000 kg is allocated to the power system. The total power requirement is 120 kW. The detailed list of main parameters of the power system is shown in Table 3. 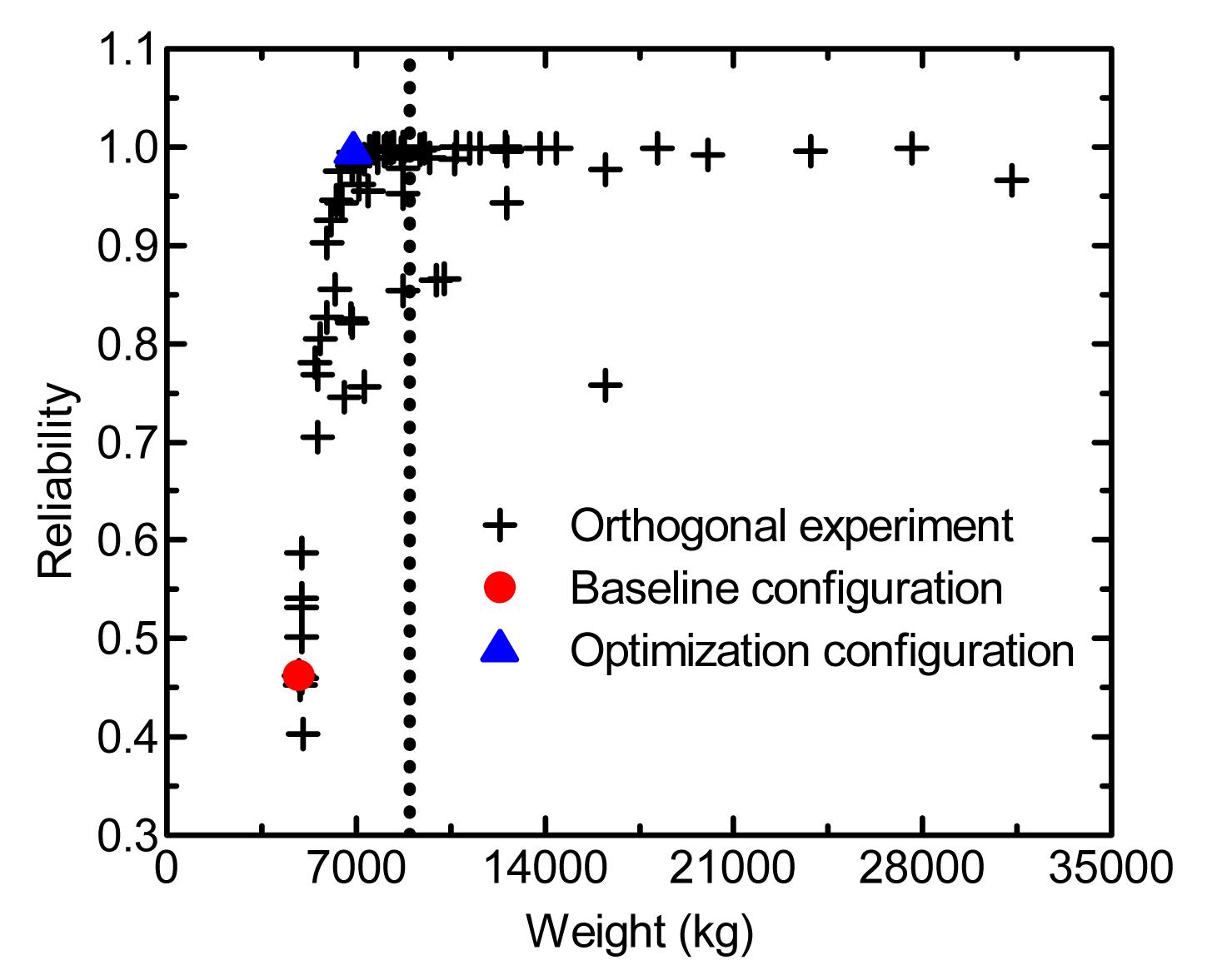 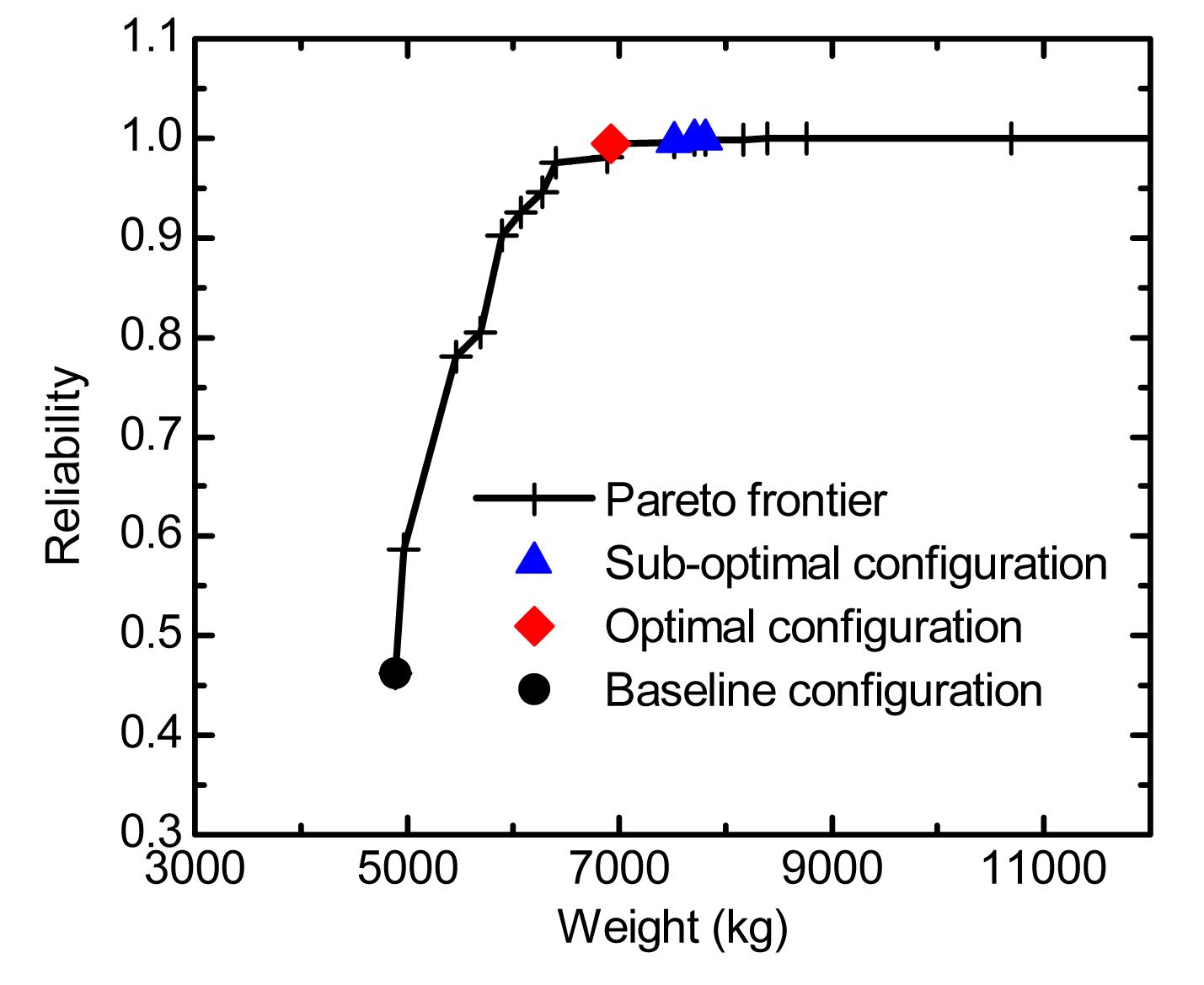 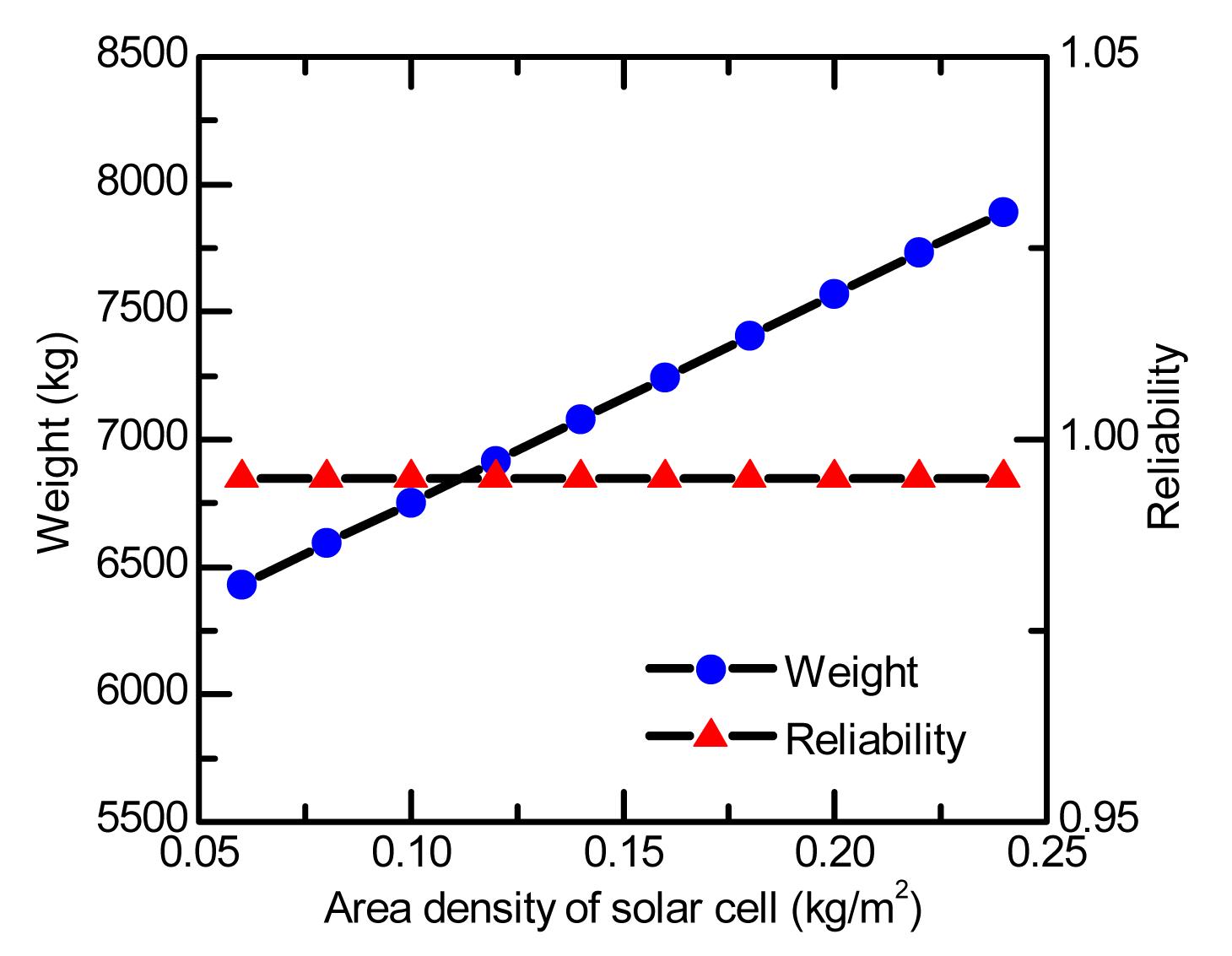 Fig.5
Effect of area density of solar cell on weight of the airship’s power system 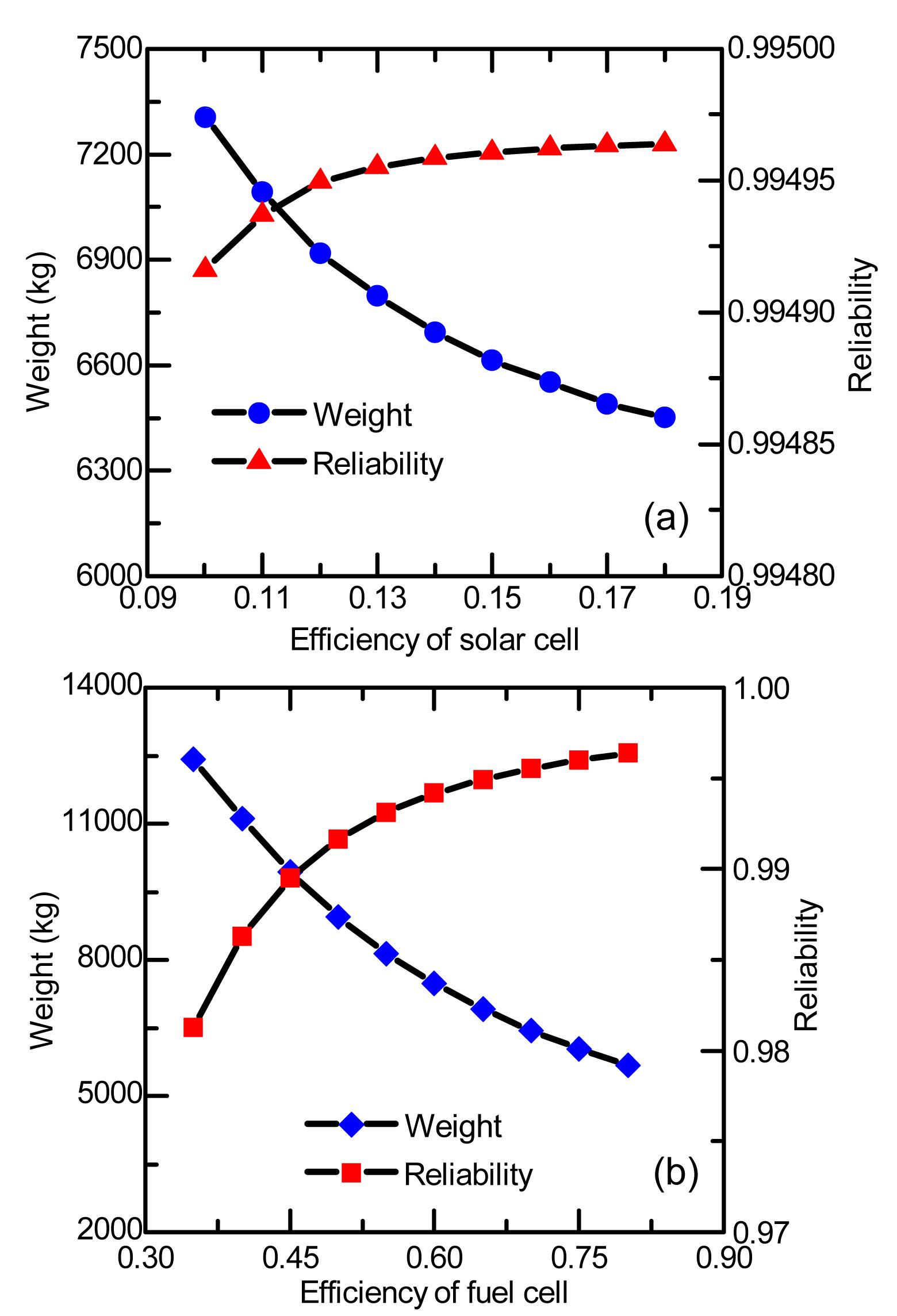 Fig.6
Effects of the efficiencies of solar cell (a) and fuel cell (b) on the weight of the airship’s power system 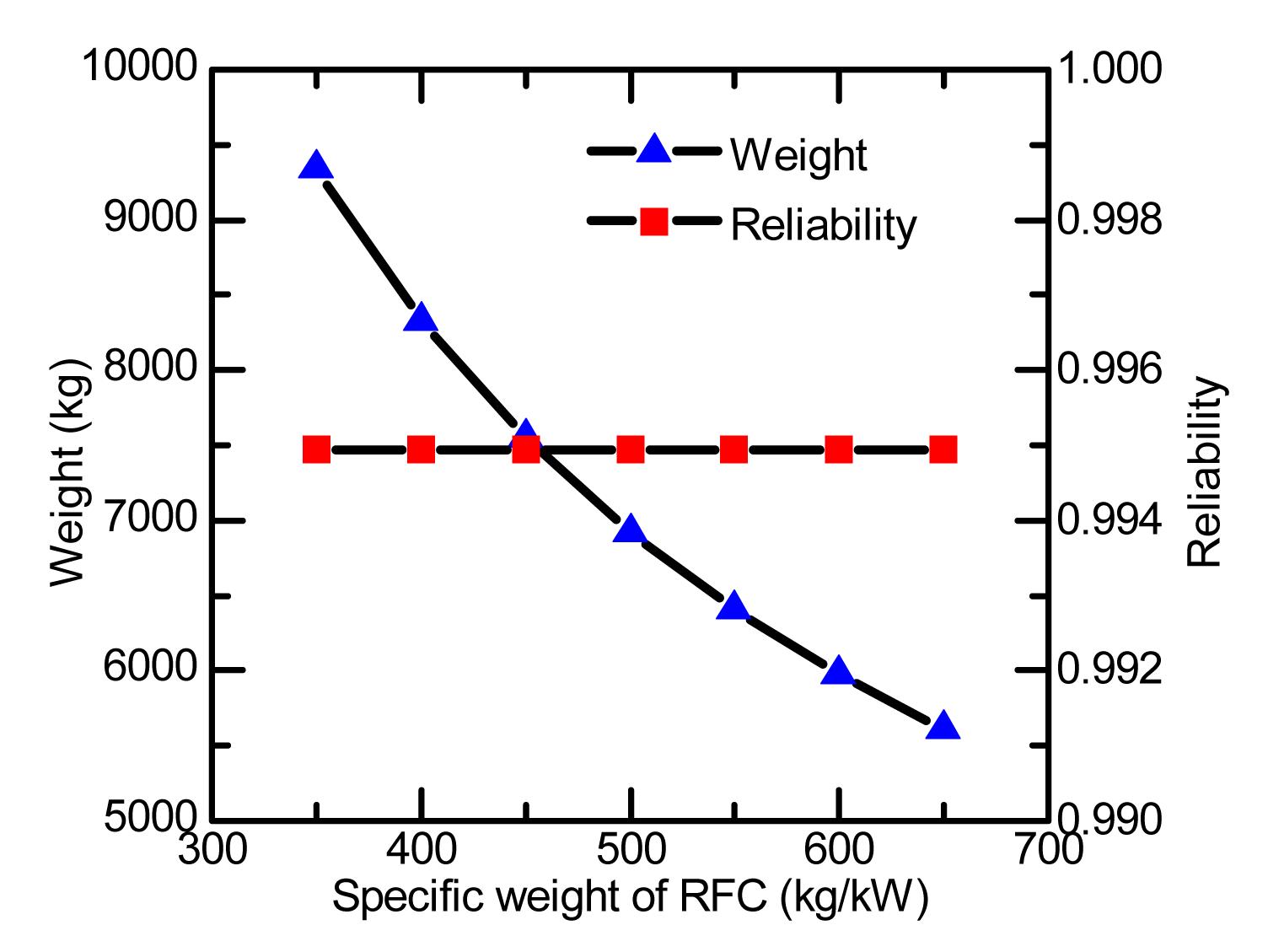 Fig.7
Effect of specific weight of RFC on the weight of the airship’s power system

The methodology of orthogonal experiment is used in the optimization design of the power system of the stratosphere airship. The mathematical models of the solar array, RFC and PMS are presented. To apply the method of orthogonal experiment, the selection of factors and levels of each factor and the choice of evaluation function are discussed.