1. Theory and techniques for....2. Electrochemical study on....3. Consolidation solution for composite....4. A precise solution for prediction of....5. A review of the chloride transport....6. EDVAM: a 3D eye-tracking dataset for....7. Relationship between chloride....8. Method of effective evaluation for....9. Nonlinear analytical solution for....

The complex pore structure of hardened cement paste in concrete consists of nanopores with a maximum diameter of 2 nm, micropores with a maximum diameter between 0.1 and 1 μm, and wider capillary pores with a diameter up to 1 mm. Under usual climatic conditions the pore space is partially filled with water, depending on the relative humidity of the environment. The aqueous solution in the pore space contains primarily such cations as Na+, K+, and Ca2+, such anions as OH−, Al(OH)4 −, and SO4 2−, and Si(OH)4 (Page and Vennesland, 1991). The exact chemical composition of the pore solution in the initial state varies with the type of cement, the water-cement ratio, and the degree of hydration. At a later stage some ions may leave the pore space by leaching and other ions such as chloride, sulfate, and ammonium may penetrate. In addition, CO2 may penetrate the pore space, either dissolved in water or as gas from the environment.

Chloride concentration and the pH value of the pore solution adjacent to the steel reinforcement are decisive parameters for initiation and rate of corrosion. The process of chloride penetration into the pore space of concrete is very complex and has not been fully understood (Geiker et al., 2007; Conciatori et al., 2008; 2010; Tang, 2008; Bermudez and Alaejos, 2010; Pack et al., 2010). If the surface of concrete gets in contact with seawater or with water containing deicing salt, the aqueous solution is first taken up quickly by capillary action. When the rate of capillary absorption becomes negligible, chloride can be transported deeper into the concrete by a slow diffusion process. But this diffusion process is difficult to predict as it is counteracted by convective flow of chloride ions towards the surface during the prolonged drying process. In addition, chloride diffusion is a reactive diffusion process. Part of the ions will be chemically bound on the way towards the reinforcement, and the other part will be fixed by adsorption on the huge inner surface area of hardened cement paste.

During cement hydration in the presence of chloride, Friedel’s salt (3CaO·Al2O3·CaCl2·10H2O) and Kuzel’s salt (3CaO·Al2O3·0.5CaSO4·0.5CaCl2·10(11) H2O) can be formed in concrete. Both Friedel’s salt and Kuzel’s salt can be classified as AFm, which is a simple term of a family of hydrated calcium aluminate phases (Matschei et al., 2007). Balonis et al. (2010) determined the solid solutions and interactions of Friedel’s salt with other AFm phases. They also proposed an equilibrium model of the chloride binding by the AFm and elaborated the factors on the Aft/AFm mineralogy. The crystal structure of Kuzel’s salt was investigated in detail by Mesbah et al. (2011). In addition, some chloride can be chemically bound by other hydration products of cement by substitution.

Theissing et al. (1978) studied the binding of chloride in different hardened cement pastes in the presence of NaCl and CaCl2. Their results showed that there is a chemical equilibrium between the chloride concentration in hydration products and the chloride concentration in the pore solution. Hashimoto et al. (2012) found that binding chlorides in the presence of NaCl was accelerated compared with CaCl2.

One mortar mix (M) and two cement paste mixes (HCP1 and HCP2) were selected for these investigations by using ordinary Portland cement P.O 42.5 produced by Dongyue Cement Ltd. (Qingdao, China) and distilled water. ISO standard sand was used for producing the mortar specimens. For some specimens, 0.5% or 1.0% sodium chloride relative to the mass of cement has been added. The chemical composition and some additional characteristics of the cement are given in Tables 1 and 2. The compositions of all the mixes of mortar and cement paste are given in Table 3.

Chemical composition of the cement

Additional characteristics of the cement

Mix composition of the specimens
Two types of cylinders with a diameter of 50 mm were cast for these experiments. One type of cylinder had a height of 50 mm. These cylinders were used to express the pore solution after 3 d and 7 d, respectively. The second type had a height of 10 mm. These thinner discs were exposed to accelerated carbonation before the pore solution was expressed.

The molds of all specimens were removed after 24 h of casting, and the young specimens were further stored in water with a temperature of (20±3) °C for 2 d or 6 d. At 3 d or 7 d the pore solution was expressed with a special device. Part of the thin discs was dried at 50 °C for 2 d and then put into an atmosphere with 20% carbon dioxide content at a relative humidity of 70% until the discs were completely carbonated. The progress of carbonation was checked by spraying a solution of phenolphthalein on freshly broken surfaces. After the carbonation was complete the discs were saturated again with distilled water in a container which is only slightly bigger than the discs, in order to minimize the risk of significant leaching during the saturation process. After saturation, five discs were stacked one above the other to form a cylinder having a height of approximately 50 mm. The pore solution of this composite cylinder was then also expressed.

Barneyback and Diamond (1981) developed a method to squeeze out the pore solution from hardened mortar and concrete. It has been shown that the chemical composition of the liquid obtained by this method may be considered to be close to the composition of the real pore solution in mortar or concrete (Page and Vennesland, 1991; Duchesne and Berube, 1994; Lloyd et al., 2010). However, this method has its limitations. Specimens have to be specially prepared, the water-cement ratio cannot be below a certain limit, and the hydration of the specimens cannot be too advanced. Certainly, there is still a small amount of liquid, which can be pressed out of the cement-based materials. Therefore, alternative methods such as leaching have also been applied in the past (Arya and Newman, 1990; Haque and Kayyali, 1995).

In spite of the limitations, a direct expression is still the reasonable way to acquire pore solution from cementitious materials compared with other methods. Haque and Kayyali (1995) showed that the chloride concentration of the decanted solution from the ground powder of concrete was about twice those of the expressed solution in their 24 concrete tests. Furthermore, the factor of overestimation decreased with the increase in the strength grade of the concrete and added chloride concentration in concrete. In the tests on cement paste specimens, Arya and Newman (1990) concluded that the water soluble chloride test almost invariably overestimates the free chloride content of mixes containing internal and external chloride, sometimes as much as several hundred percent.

In the investigation, when the longer cylinders were cured as indicated above or the carbonation of the shorter cylinders was complete, the specimens were placed in the pore solution expression device, which was designed based on the concepts of Barney-back and Diamond (1981) (Fig. 1). The device was loaded in a testing machine at a constant rate. When the load level has attained a value between 1600 and 1800 kN, the load was kept constant for 3 to 5 min. Under the applied load the pore solution began to flow through the fluid drain and could be collected in a small glass beaker. From each specimen, 4 to 6 ml of pore solution could be obtained by this device for the following analysis. 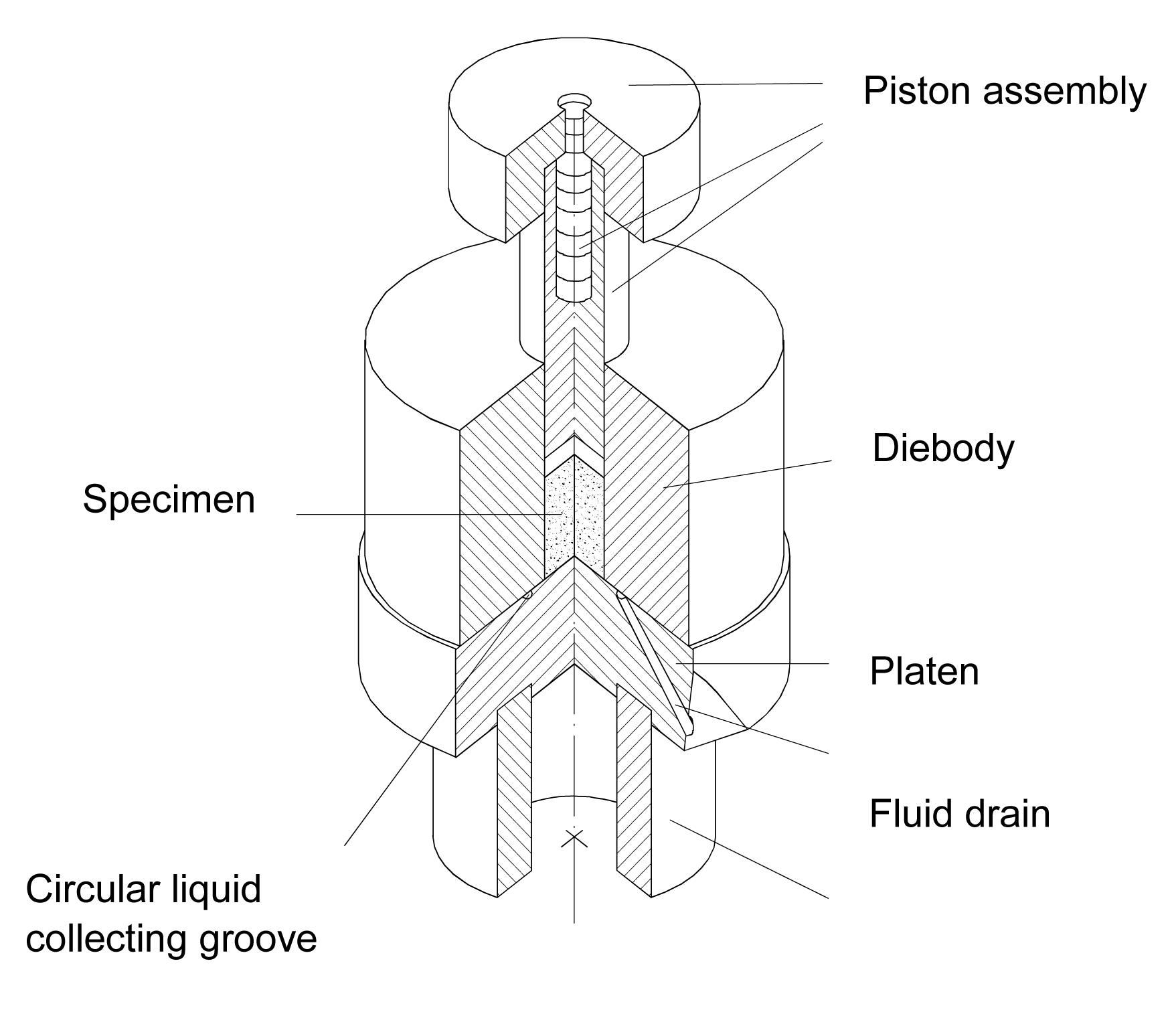 The pH value of the pore solution was measured with a calibrated digital pH meter.

Dissolved chloride in the pore solution
Table 4 shows that the concentration of the dissolved chloride decreases with ongoing hydration. This can be explained by the fact that more and more chloride is bound as hydration goes on. Part of it will be found in Friedel’s salt and Kuzel’s salt, while a second part will substitute other ions in other conventional hydration products. A third part will be adsorbed at the huge internal surface of the hydration products and in the nanopores. The chloride in the nanopores increases shrinkage significantly by increasing the disjoining pressure (Scovazzo and Todd, 2001; Wittmann et al., 2009).

Carbonation leads to an enormous increase of chloride concentration in the pore solution (Table 4). For all nine mixes, the contents of dissolved chloride in the pore solution subjected to accelerated carbonation are about 2–12 times those subjected to natural atmosphere. Decrease of the total porosity of hardened cement paste and the content of dissolved water that enters into pores during saturation is one of the reasons for the increase of dissolved chloride content in the pore solution after carbonation. Nevertheless, in the carbonated state some compounds become unstable and then the bound chloride is freed back into the pore solution. Nagao and Ueda (2003) reported that the ratio of soluble chloride to total chloride near the exposed surface is larger than that in the case of non-carbonated specimens, and that soluble chloride occupies about 90% of total chloride at the closest area to the exposed surface. Goñi and Guerrero (2003), however, studied the stability of Friedel’s salt with respect to carbonation in calcium aluminate cement pastes containing 3% chloride. They reported that the carbonation of Friedel’s salt does not produce a significant increase of soluble chloride. Through the investigation it can be found that the dissolved chloride is indeed enhanced by carbonation.

Fig.2
Chloride distribution in mortar (M) as function of the total chloride content at different ages and after carbonation, mg/g of cement
(a) Bound chloride; (b) Chloride dissolved in the pore solution

Fig.3
Chloride distribution in hardened cement paste with W/C=0.5 (HCP1) as function of the total chloride content at different ages and after carbonation, mg/g of cement
(a) Bound chloride; (b) Chloride dissolved in the pore solution

Note that chloride concentration in the aqueous pore solution depends strongly on the degree of carbonation. It is obvious that chloride penetration into concrete cannot be described correctly by a simple diffusion process. If the carbonation front reaches the steel reinforcement, the increased chloride concentration after carbonation may lead to initiation of steel corrosion, even if the amount of chloride penetration from outside has not yet reached a critical value for an uncarbonated state. This is a typical example for combined actions aggravating the situation for durability and service life of reinforced concrete constructions.

Based on the results described in this investigation the following conclusions can be drawn: