1. Misalignment analysis of journal....2. An efficient adaptive finite element....3. Theory and techniques for....4. Analysis of piston-pin lubrication....5. A new method for studying the 3D....6. Applying gravitational search....7. New numerical solution for....8. Algorithm for 2D irregular-shaped....9. A new algorithm based on the....

Abstract: Journal misalignment is common in journal bearings. When severe journal misalignment takes place, it affects nearly all aspects of bearing performance. This paper provided a comprehensive analysis of misaligned journal bearings based on two different mass-conservative models which appropriately took into account film rupture and reformation. The lubrication characteristics and performance parameters including the cavitation zones, pressure distribution, density distribution, oil leakage, load capacity, moment, and attitude angle were compared with the traditional lubrication model. The results showed that cavitation has great effect on bearing performances, especially when the surface roughness is large. Therefore, it is necessary to consider the effects of journal misalignment alongside inter-asperity cavitation theory in the design and analyses of journal bearings.

Journal misalignment generally occurs in journal bearings due to a number of causes, such as shaft deformation under load, improper installation or manufacture and assembly errors in the bearing, or thermal deformation of the shaft. They can individually or collectively cause misalignment with often undesirable consequences in bearing performance. Full understanding of the misalignment mechanism and establishment of the precise lubrication model will help researchers to assess the effect of the misalignment on bearing performance and introduce a misalignment factor into their calculations which can eliminate some of the discrepancies found in numerical simulations.

Many researchers have studied the effect of journal misalignment on the lubrication performance of journal bearings. McKee (1932) firstly analyzed the effects of misalignment on pressure distribution in the axial direction of a journal bearing. Dubois et al. (1957) experimentally investigated the pressure field and the misalignment of couples under journal misalignment. They observed that the permanent deformation of the bearing at its ends causes the maximum pressure to increase and the performance of the bearing to reduce under severe conditions of misalignment. Then they also found that shaft eccentricity at the end of the bearing is related to axial flow rate and local temperatures in the bearing. Bousaid and Chaomleffel (1987) presented the influence of misalignment parameters on dynamic characteristics of three asymmetric lobed bearings for two values of eccentricity ratio ε 0=0.2 and 0.8. They demonstrated that the influence of misalignment is important at lower eccentricity ratios particularly when the degree of misalignment exceeds 60%. Pierre et al. (2002; 2004) compared the experimental data with theoretical results of a thermohydrodynamic study of a misaligned plain journal bearing. They concluded that the misalignment increase temperatures in the bearing and significantly decrease the minimum film thickness. Guha (2000; 2002) solved the problem of isotropic steady-state characteristics of hydrodynamic journal bearings considering the isotropic roughness effect. The steady-state characteristics of a journal bearing in terms of load, attitude angle, oil leakage, frictional coefficient, and misalignment moment are estimated with various values of roughness parameters, misalignments, and eccentricity ratios. Nikolakopoulos (1994; 1997; 2008) presented an analysis of a misaligned journal bearing operating in linear and nonlinear regions. He also examined the effects of the misalignments on the stability of a linear rotor-bearing system in laminar flow, via the direct method of Lyapunov. Then an analytical model was developed to find the relationship between the friction force, the misalignment angles, and the wear depth. Bouyer and Fillon (2002) presented a study dealing with experimental determination of the performance of a 100 mm diameter journal bearing with an applied misalignment torque. They found that the bearing performance was greatly affected by the misalignment. The maximum pressure in the mid-plane was decreased by 20% for the largest misalignment torque, while the minimum film thickness was reduced by 80%. The misalignment caused more significant changes in bearing performance when the rotational speed or load was low. The hydrodynamic effects were then relatively small and the bearing offered less resistance to the misalignment. Boedo and Booker (2004) investigated both transient and steady state behavior of misaligned bearings, and found that misaligned bearings have infinite load and moment capacity. Wang (2002) considered the fluid flow in the gap formed by rough surfaces, asperity contact, surface thermoelastic deformations, and a temperature-pressure-viscosity relationship for the lubricant, as well as an angular misalignment between the journal and the bearing. The peak pressure moved away from the center of the bearing towards the edge where contact occurs. The journal bearing with misalignment tends to develop asperity contact at a lower eccentricity ratio. Sun et al. (2004; 2005a; 2005b; 2010) studied the effect of journal misalignment caused by shaft deformation under static and rotary loads on journal bearing lubrication performance, such as oil film pressure, oil film thickness, and oil temperature. Then temperature of the oil film was investigated under a thermo-hydrodynamic lubrication model which considered surface roughness. He (2012) coupled the straightforward elastic theory with a lubrication model by using a simple stepped shaft, and the result showed that the angle caused by an unsymmetrical shaft have great effect on both the oil film and temperature distribution. Much attention was paid to the investigation of the performance of the tilting-pad journal bearing under different modes of loading.

Compared with the journal misalignment theory, the cavitation theory which was introduced to the lubrication problem was built later by Jakobsson and Floberg (1957) (also called JFO) and Elrod (1976). Buckholz and Lin (1986) analyzed the effect of journal bearing misalignment on load and cavitation for partial arc journal bearings lubricated by non-Newtonian lubricants. The effect of cavitation on the performance of a line-grooved misaligned bearing for both flooded and starved inlet conditions was investigated. Vijayaraghavan (1989) analyzed a finite grooved misaligned journal bearing considering cavitation and starvation effects. The modified Elrod cavitation algorithm was used to predict the location of the film rupture and reformation fronts. They showed that for higher degrees of misalignment, the performance characteristics of the bearing differ greatly from those predicted in the case of an aligned journal bearing. Jang (2010) took account of film rupture into bearing to analyze misaligned journal bearings based on mass-conservative thermo-hydrodynamic analysis, and analyzed some performances of bearing while neglecting the roughness.

From the literature review, most researchers only focused on the effect of misalignment or cavitation. A few papers coupled misalignment with cavitation, but neglected surface roughness. The cavitation problem was always solved with the special finite difference approach. The mass-conservative theory is also a useful way to solve the cavitation problem. Payvar and Salant (1992) analyzed the effect of sealing structure on the cavitation with mass-conservative theory, but again neglected the surface roughness. Based on the Payvar and Salant (1992)’s theory, Harp (2000; 2001; 2002) carried out the basic theoretical research on cavitation with roughness which was compared with a deterministic model and the model of Patir and Cheng (1978).

Mass-conservative theory has been found to be an accurate model for journal bearing cavitation. In this paper, we focus on the factors which influence cavitation characteristics, the effect of cavitation on the bearing performance, and the cavitation model with roughness. We use a mass-conservative algorithm with consideration of surface roughness for implementation of the JFO boundary conditions to analyze the cavitation phenomenon. Based on mass-conservative theory, a Matlab program is developed to study the effect of cavitation, surface roughness, surface pattern parameter, and eccentricity ratio on the pressure distribution, oil leakage, load capacity, attitude angle, and density. A more accurate model is used to study journal-bearing performance. It will provide guidance for the design of the bearing.

Fig. 1 presents a misaligned journal bearing system; according to its structure, the oil film thickness is written as where c is the clearance of the bearing, e is the eccentricity at the bearing mid-plane, L is the length of the bearing, γ′ is the misalignment angle, φ is the angle between the load line and the line of centers, α′ is the angle between φ and the rear center of the misaligned journal, y is the coordinate axis along the axial direction, and θ is the angular coordinate. C 1, C 2, and C 3 are intersections of the journal axis with the front, middle, and rear planes of the bearing, respectively, e′ is the magnitude of the projection of the axis of the misaligned journal on the mid-plane of the bearing. Mx and Mz are the components of misalignment moments along the x and z directions, respectively. Wx and Wz are the components of load capacities along the x and z directions, respectively, and h 1 and h 2 are the oil film thickness at different sections. 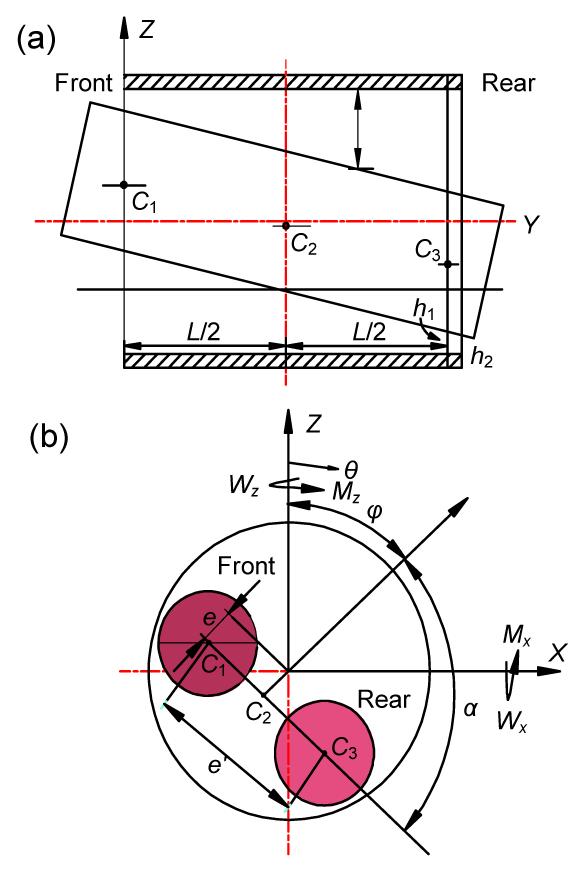 The governing equation of the traditional lubrication model is defined as where p is the film pressure, R is the bearing radius, u is the velocity along the circumferential direction, and μ is the viscosity of the oil film.

The average Reynolds equation that considers the surface roughness effects of journal and bearing surfaces on the lubricant flow is employed to describe the relationship between the hydrodynamic pressure and the lubricant film thickness. where ϕθ and ϕy are pressure flow factors, ϕs is the shear flow factor, and σ is the composite root mean square (RMS) roughness.

When the cavitation phenomenon occurs, the oil film is divided into a full film region and a cavitation region. There are two main methods to solve cavitation problem: one is to build special finite difference approach, and the other uses mass-conservative algorithm.

In this study, some intermediate variables are introduced in the process of integration, such as α, switch function F. Then the Reynolds equation is integrated together to solve the cavitation region and the full film region. The functions can be written as where p ref is the reference pressure, ρ c is constant density, and p c is the pressure in the cavitation zone.

When cavitation occurs, the right side of governing equation equals zero, and F=1 in the full film region. All the integrated function with cavitation and full film can be written as 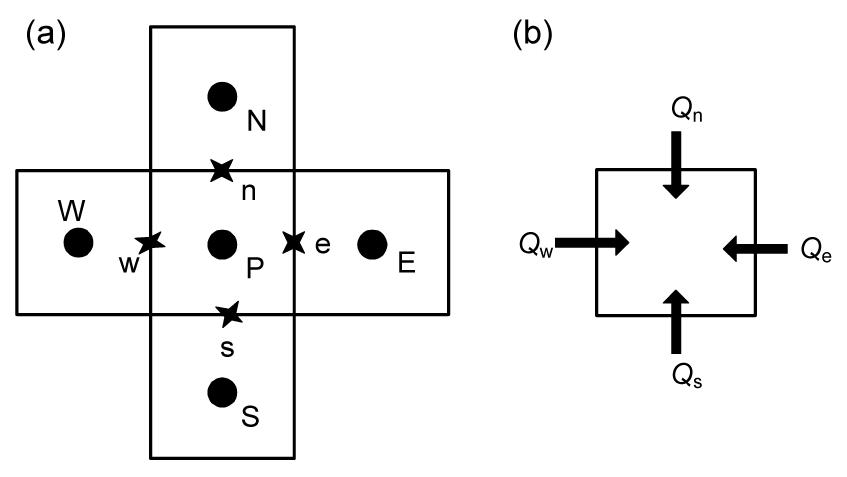 Fig.2
Control volume and value locations
(a) Control volume, node, and interface; (b) Oil flux into control volume
The expanded form of Eq. (8) can be rewritten as

When the surface roughness is considered, the pressure flow factors ϕθ and ϕy , and shear flow factors ϕ s,c and ϕ c,c, are added to the equation. The governing equation which considers the cavitation and inter-asperity cavitation can be expressed as where is the mathematical expectation of the film thickness after considering the roughness, and .

The expanded form of Eq. (13) can be rewritten as

The expression used to fit the flow factors curve in Patir and Cheng (1978)’s model is defined as where γ is surface pattern parameter.

The relationship between flow factors ϕx and ϕy are written as