1. Supersonic mixing augmentation....2. Characteristics of mixing enhancement....3. Theory and techniques for....4. Experimental investigation on flow....5. Simulation and analysis of resin flow....6. Research on new type of fast-opening....7. Extension of LCVM-type mixing rule to....8. Mixing and combustion in....9. Effects of bleed hole size on....

When fuel is injected into the flowpath from the forebody/inlet of the hypersonic vehicle, the length of the combustor is shortened, and the weight of the engine is lightened (Livingston et al., 2000; Guoskov et al., 2001; Huang et al., 2010; Wang and Sislian, 2010; Turner and Smart, 2010; Feng et al., 2011). The laser-induced plasma ignition characteristics of the inlet injection flow field in the scramjet engine were investigated by Brieschenk et al. (2013) using the planar laser-induced fluorescence technique, as shown in Fig. 1. This was the first laser spark study for inlet injection in hypersonic flow. This research demonstrated that the laser-induced plasma ignition technique could promote the formation of hydroxyl in hypersonic flow.

At the same time the transverse injection scheme can provide better fuel penetration performance, mixing performance, and heat release performance, than the parallel injection scheme when the incoming Mach number is much lower—but it will induce larger total pressure loss (Manna and Chakraborty, 2005). This implies that there must be a compromise between the objective functions of the supersonic transverse injection flow field, and that the flow field should be optimized by the multi-objective design optimization method. Thus, a quantitative relationship between the objective functions and the design variables, and a qualitative relationship between the objective functions can be obtained. In the current study, the transverse injection scheme means that the fuel is injected into supersonic crossflows transversely, and the parallel injection one means that the fuel is injected parallel to the supersonic freestream.

However, the shock wave structure generated in an unsteady liquid fuel injection flow field, i.e. kerosene or diesel in this case, is more complicated (Xu et al., 2000) and includes four regimes in the atomization region, namely jet column zone, primary and secondary breakup zones, and droplets zone. This phenomenon is not observed in the transverse gaseous injection system, implying that the phase of the fuel has an impact on the structure of the transverse injection flow field. The hydrogen injection scheme is shown to be more efficient for increasing the cruising speed of a hypersonic vehicle (Wang et al., 2011b).

To the best of the authors’ knowledge, Ogawa and Boyce (2012) first applied a surrogate-assisted evolutionary algorithm to optimize the fuel injection flow field in a scramjet engine, and the Pareto front has been obtained (Fig. 2). In Fig.2, h p, Δp 0, and η m represent the fuel penetration height, the total pressure loss, and the mixing efficiency, respectively. The results obtained show that the injection angle and the aspect ratio of the injection port both have a large impact on the mixing of the fuel and the incoming flow, and the fuel penetration depth is determined by the injection angle and the distance between the injection ports. Further, the jet-to-crossflow pressure ratio is shown to be a key parameter governing the aerodynamic properties in the transverse injection flow field (Rizzetta, 1992; Beresh et al., 2006; Chen et al., 2011; Huang et al., 2012b). 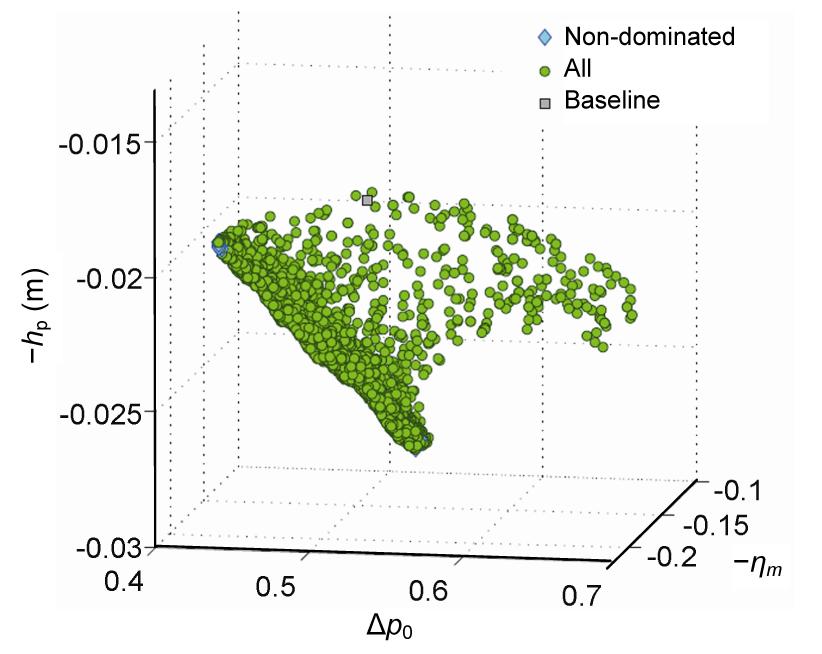 2.  Effect of the jet-to-crossflow pressure ratio 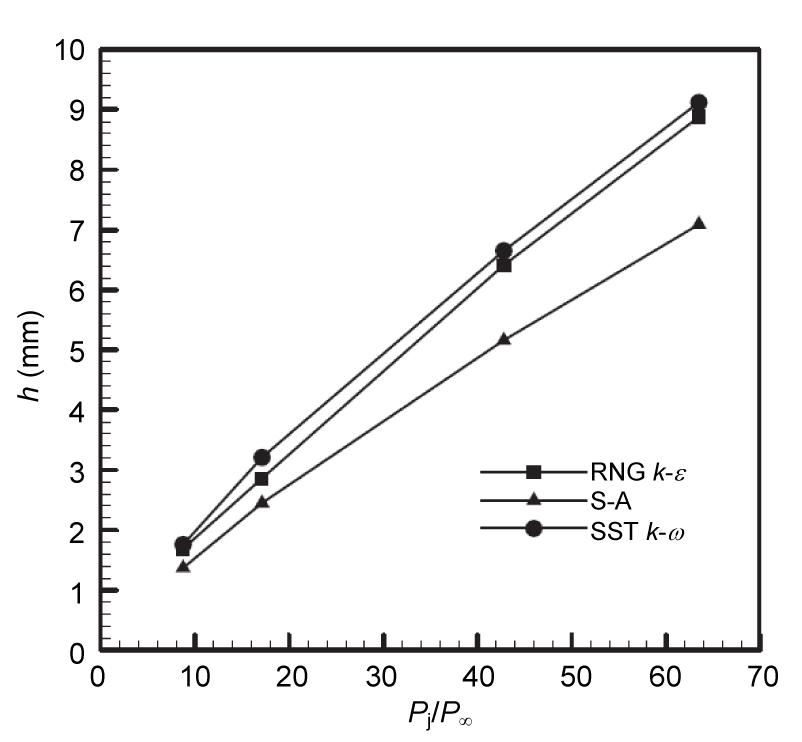 A detached-eddy simulation (DES) model was employed by You et al. (2012; 2013) to study a transverse injection flow field with a low jet-to-crossflow momentum flux ratio (J=0.35) in the HyShot II scramjet system. They found that a combination of a detached normal shock wave and a 3D barrel shock wave is generated in the vicinity of the exit of the injection port when the jet-to-crossflow momentum flux ratio is low (Fig. 4). This is due to the simultaneous occurrence of the overexpansion and underexpansion conditions at the exit of the injection port. At the same time, the Ω-shaped vortices, which were observed in previous experiments, were obtained, as shown in Fig. 5 (You et al., 2013). The formation of the Ω-shaped vortices is due to the interaction between the unsteady Kelvin-Helmholtz (K-H) instability and the counter-rotating vortex pair (CVP) deformation. It is concluded that the Ω-shaped vortices can provide better mixing performance than the CVP. 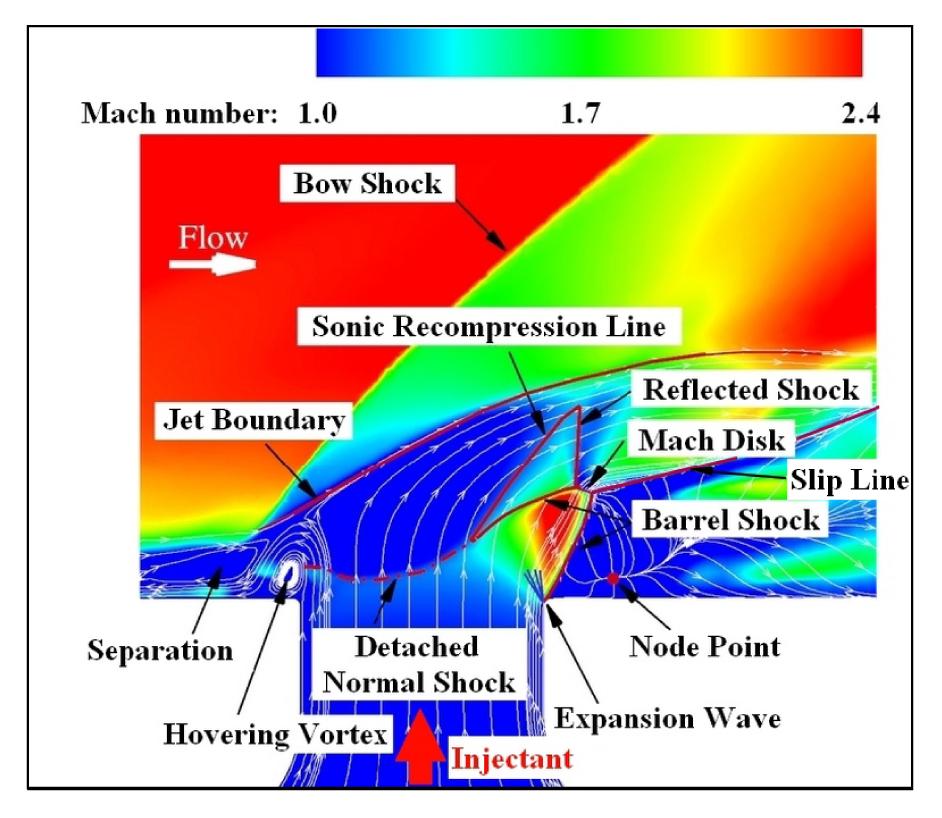 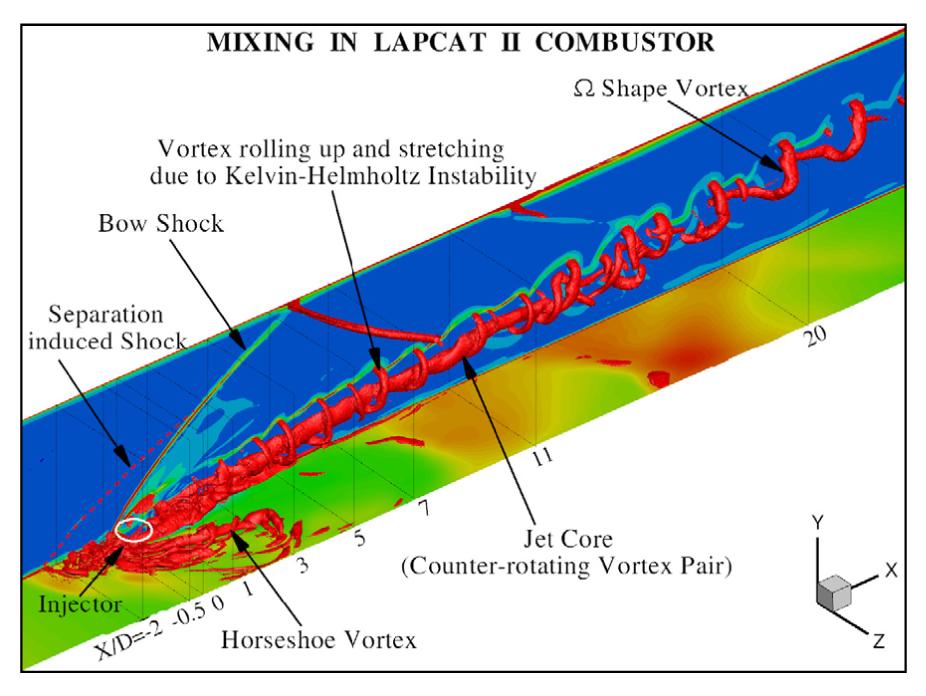 3.  Effect of the geometric configuration of the injection port

The flow field structure near the diamond-shaped injection ports with different injection angles and two total pressures has been investigated experimentally by Bowersox et al. (2004). Their experimental approaches include surface oil flow visualization, shadowgraph photography, Mie scattering flow visualization, pressure-sensitive paint, and a pitot-cone five-hole pressure probe. Meanwhile, a 90° circular injector, with the same exit port area and total pressures, was studied for comparative purposes. Finally, they obtained the penetration correlations for both the diamond and circular injectors, as shown in Fig. 6. It is concluded that the 90° circular injector can generate the largest peak pressure for a given jet-to -crossflow pressure ratio, and its total pressure loss is the largest. 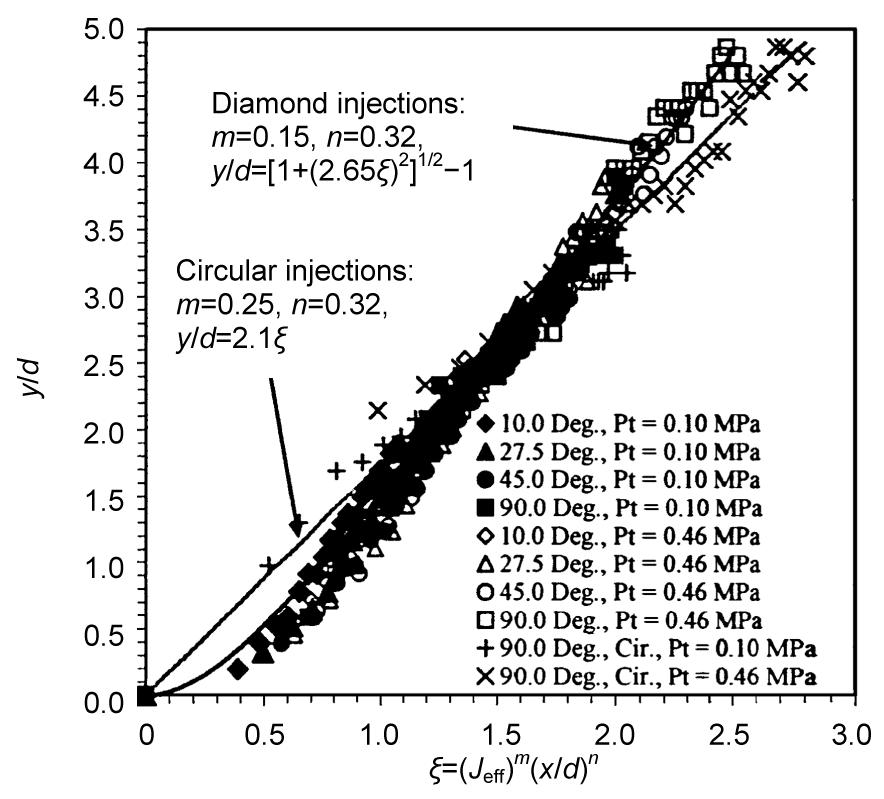 In Fig. 6, J eff=Jsinα=ρ j u j 2sinα/(ρ ∞ u ∞ 2), with α being the injection angle and d the effective geometric diameter (4.89 mm). x and y are the axial and transverse coordinates, respectively. P t is the stagnation pressure for the supersonic freestream.

Srinivasan and Bowersox (2008) used both Reynolds-averaged Navier-Stokes (RANS) and DES models to study the transverse injection flow field structures with circular- and diamond-shaped injection ports in a Mach 5.0 freestream flow. They found that a lateral counter-rotating vortex pair (LCVP) is located just downstream of the barrel shock wave in the diamond-shaped injector flow field (Fig. 7). This structure can entrain fluid from the injection port, enabling the vortex pair to act as a potential flame holder to a certain extent. It can also reduce the heat transfer to the wall compared with the cavity flame holders and, at the same time, prolong the resident time compared with the streamline in the freestream. The configuration of the barrel shock wave has an important impact on the formation of the LCVP. The shock wave shape for the diamond-shaped injector facilitates the formation of the LCVP, and a pair of cone-shaped node structures is formed downstream of the LCVP (Fig. 7). 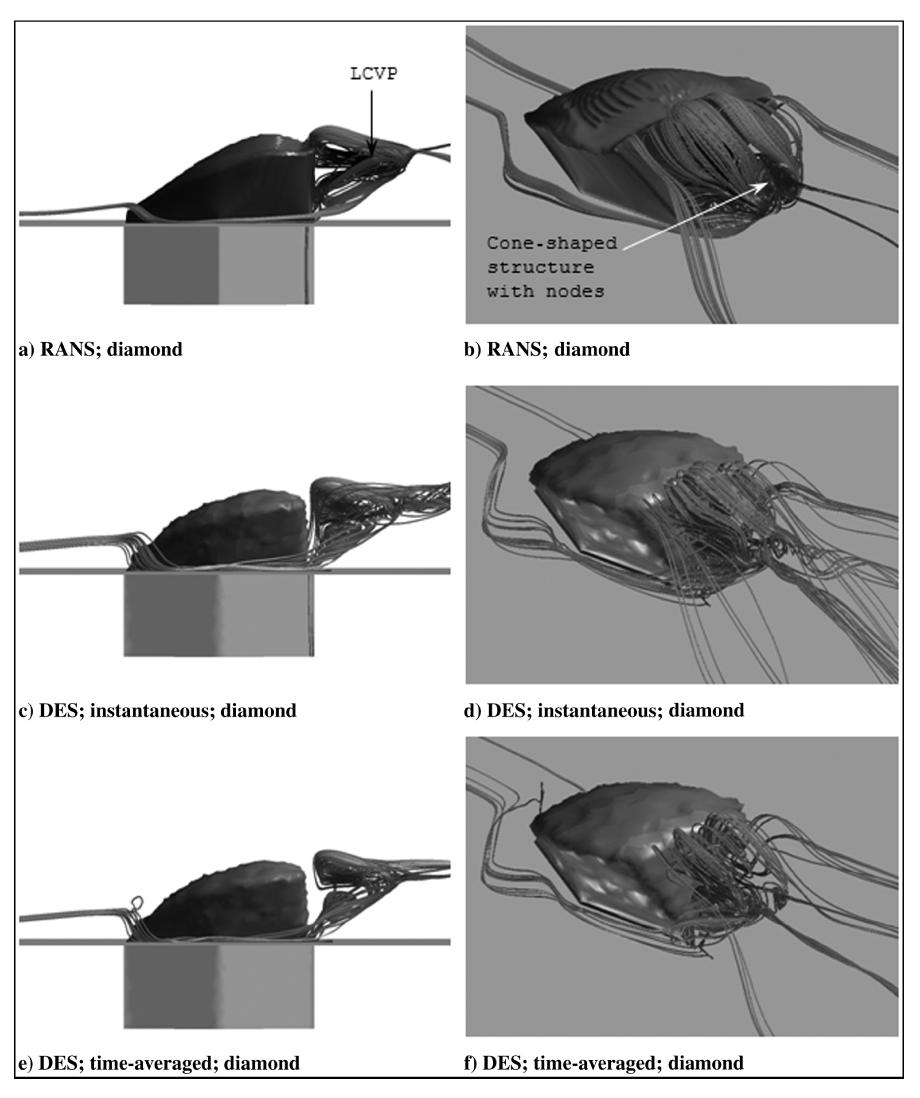 Fig.7
Lateral counter-rotating vortex pair flow structure in the diamond-shaped injector configuration. Freestream flow is from left to right for left-column images and from top left to bottom right for right-column images (Srinivasan and Bowersox, 2008)

Based on the research carried out by Srinivasan and Bowersox (2008), the mixing and combustion flow fields using a diamond-shaped fuel injection port in a Mach 2.0 freestream were investigated experimentally and numerically by Kobayashi et al. (2010). Their aim was to visualize the structure of the LCVP and assess its reactivity. In the experiment, the NO-Planar Laser Induced Fluorescence (NO-PLIF) images captured the 3D structure of the LCVP for the first time; however, the combustion suitable for flame holding was not observed within the LCVP. This is due to the low pressure and temperature under the operating conditions, and the gas composition within the LCVP is very fuel-rich. Tomioka et al. (2011) investigated the combustion characteristics with diamond- and circular-shaped injection ports in a direct-connect supersonic combustor. They found that supersonic injection through the diamond-shaped injection port can result in a slightly larger pressure rise in the far field. However, the possibilities for ignition and mode transition (ramjet-to-scramjet mode combustion) are weaker due to less interaction between the injectant plume and the airstream near the injection wall. 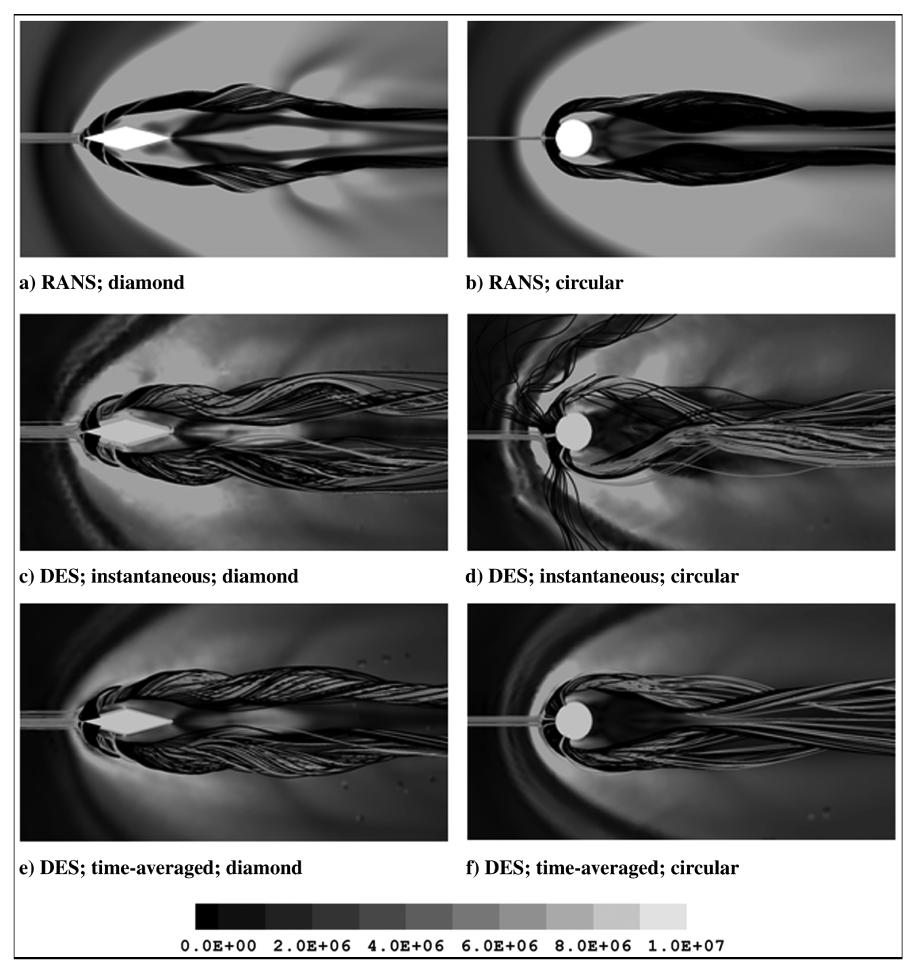 Fig.8
Comparison of the leading-edge mixing vortex for circular- and diamond-shaped injection ports (Srinivasan and Bowersox, 2008)

4.  Effect of the number of injection ports 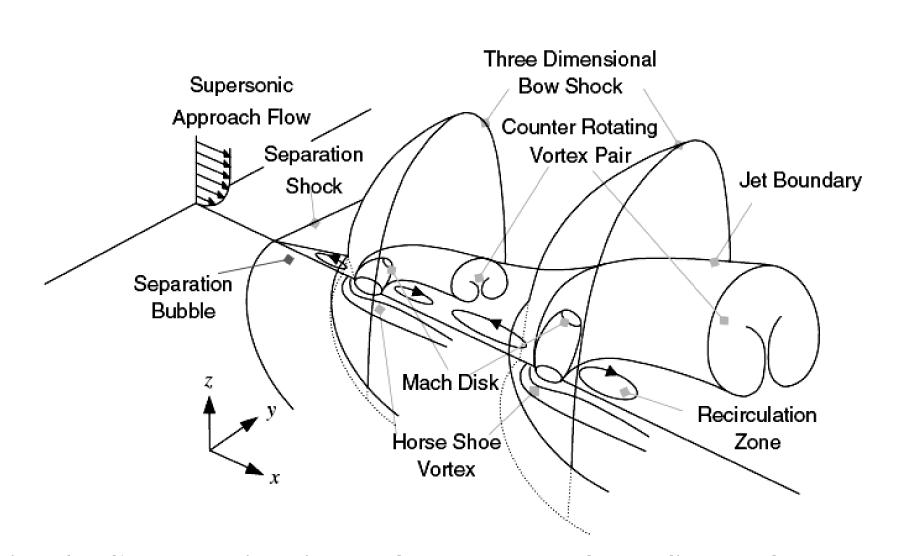 Fig.9
Schematic view of the mean flow field of the dual transverse injection scheme (Lee, 2006a)

Fig. 9 shows the schematic view of the dual transverse injection flow field (Lee, 2006a). The supersonic freestream is blocked by the front jet, and the blockage effect has an important impact on the mixing process. There are many shock waves generated in this flow field: the 3D bow shock waves formed ahead of the front and rear jets, a separation shock wave generated by the interaction between the front bow shock wave and the boundary layer, and the Mach disks. A remarkable characteristic of the dual injection scheme is that the Mach disk of the rear jet is located at a higher position from the wall and is larger than the Mach disk of the front jet. At the same time, there are many vortical pairs formed along the jet direction, i.e., the horseshoe vortices, the separation bubble, and the recirculation wake flows. The evolution of the vortex pair is a very complex process involving 3D tilting and folding. The streamwise vortices roll up the injection flows, and thus the mixing process between the fuel and the freestream is accelerated. 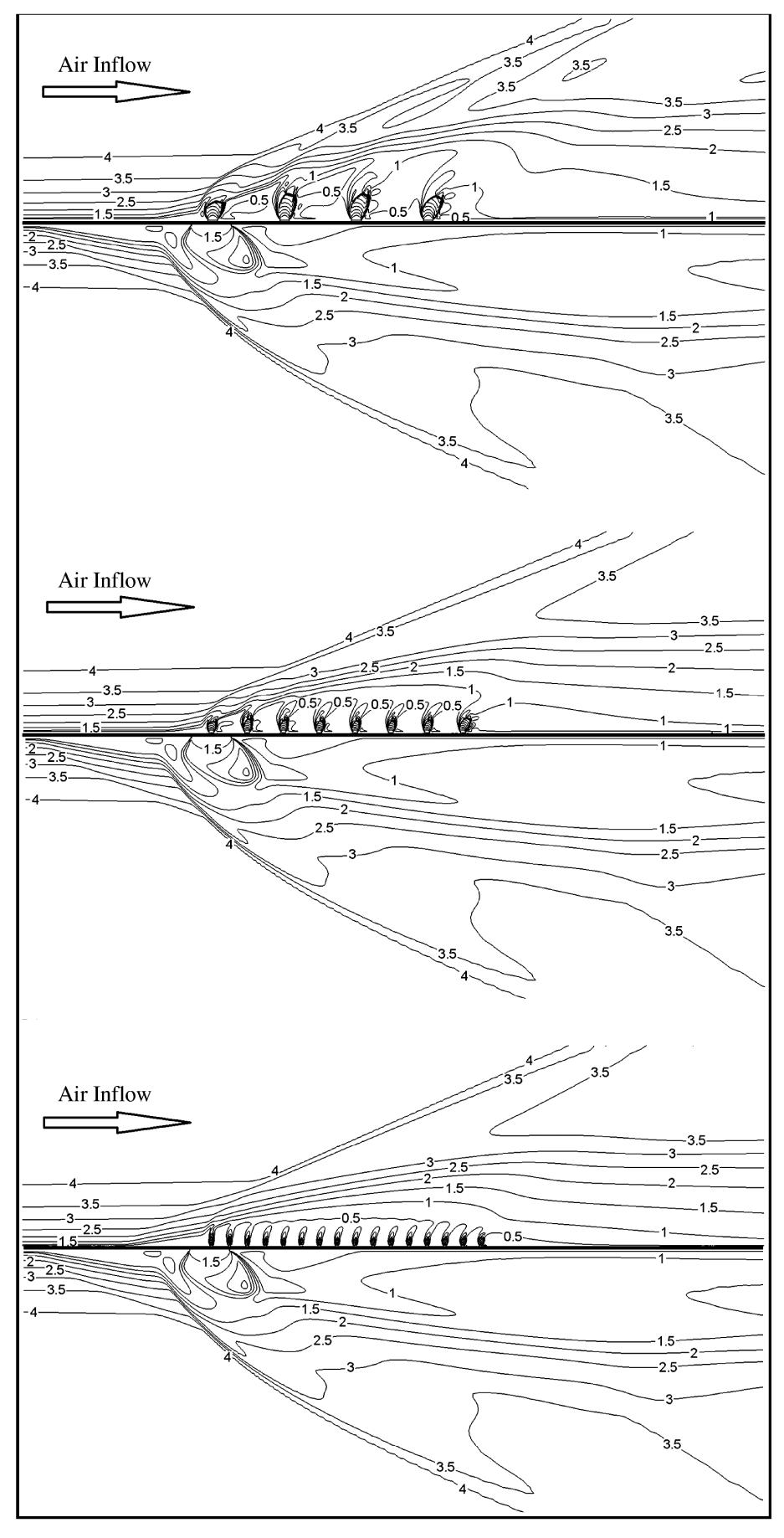 Fig.10
Mach number contour comparisons of multi-jet cases (upper half of each plot) to single-jet case (lower half) (Pudsey and Boyce, 2010) 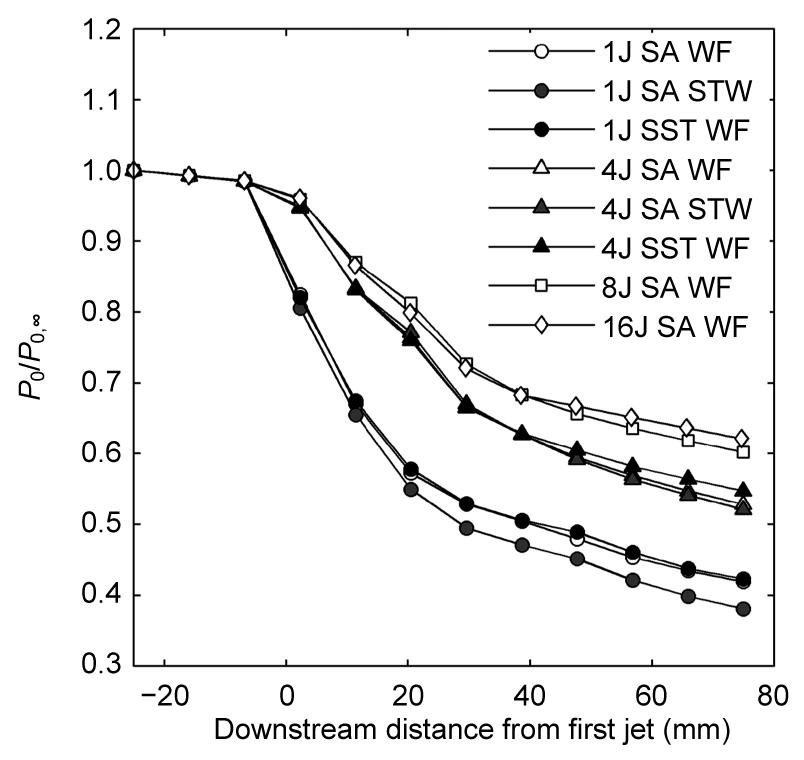 Fig.12
Comparison for the mixing efficiencies of multi-jet cases (Pudsey and Boyce, 2010)

At the same time, the combination of the dual transverse injection scheme and the backward-facing step was widely employed in the supersonic flowpath (Abbitt et al., 1993; Chakraborty et al., 2003; Manna and Chakraborty, 2005) to enhance the mixing process between the fuel and the supersonic freestream. The combustion efficiency of the scramjet engine was improved thereby.

The numerical simulation approach was employed by Abdelhafez et al. (2007) to compare the relative performance of oblique and transverse injections in a scramjet combustor. They found that the oblique injection scheme gives higher mixing efficiency and effectiveness compared with the transverse injection scheme, which is due to the oblique injection scheme making use of the interaction of the injection-induced shock waves with the air/fuel shear layer. At the same time, the oblique injection scheme can provide better performance in respect of total pressure loss, flow blockage, and boundary layer separation. However, the selection of the injection angle has a strong relationship with the incoming boundary condition and the geometric configuration, and the equivalence ratio is one of the most important control variables for the mixing length. Therefore, this flow field must be optimized by using the multi-objective design optimization approach. Abdelhafez et al. (2007) concluded that the optimal injection angle is 5°, and it can minimize the total pressure loss and improve the mixing efficiency between the fuel and the supersonic freestream. The thrust performance of the engine can thus be improved. In this section, the case with the injection angle being 90° is the normal injection scheme. In this survey, research on the mixing techniques of the transverse injection flow field has been summarized from four aspects: the jet-to-crossflow pressure ratio, the geometric configuration of the injection port, the number of injection ports, and the injection angle. The following conclusions can be made as follows.