The maglev system has the advantages of less environmental impact and better ride quality than a conventional rail system. Research and development in maglev technology are being actively pursued in Europe, Japan, and the USA. The Shanghai maglev system, which adopted Transrapid 08 (TR08) technology, was the first commercial high speed maglev system (Fig. 1). This line, which links Pudong International Airport with Long Yang Road Station, is about 30 km long, and the journey takes just 7 min to complete. The peak speed is 431 km/h and the average speed 266 km/h. All adjustment and test work has been conducted successfully without any safety or operational problems.

Track irregularities have important effects on the stability and ride quality of maglev trains. In the past two decades, numerous researchers have focused their efforts on this problem. The power spectrum density (PSD) function of track irregularities of a permanent maglev line (Tsunashima and Abe, 1998) has been studied by some researchers (Kwon et al., 2008; Zhao and Zhai, 2008). A vertical profile of maglev line irregularities was simulated by PSD functions of a conventional railway track (Yau, 2009; 2010). The actual track irregularities of a maglev system were applied in Korea to investigate the dynamic responses of an urban transit maglev vehicle and guideway (Lee et al., 2009). The PSD function of track irregularities of the Tangshan low speed maglev line in China was estimated by means of a sample stationary test (Zhou et al., 2012). An inertial measurement method for detecting long wave irregularity of a maglev guideway was introduced, and a linear phase IIR variable filter was designed to extract the long wave components from the measured signals (Zheng et al., 2007). An integrated measurement system was described (Nieters, 2004), which used the vehicle’s own sensors to monitor the position of the statorpacks and guidance rails for the Shanghai maglev line. However, little research has been conducted on analyzing the irregularity of a high speed maglev line, and no detailed method has been proposed to characterize the irregularities, especially for the high speed maglev (TR08) line.

In this paper, a method for measurement and processing of irregularities of the high speed maglev line is described. By using our processing method, the irregularities are calculated by air gap and magnet displacement. The characteristics and distribution of track irregularities in space wavelengths are analyzed.

2.  Cause of track irregularities

Guideway girders of the high speed maglev are precast in a girder factory and equipped with the system components of a statorpack, guidance rail, and gliding rail, and then assembled on site as a part of the space curve (Fig. 2). A series of these functional components 3.096 m long are installed on a 24 m-span girder using high strength bolts. 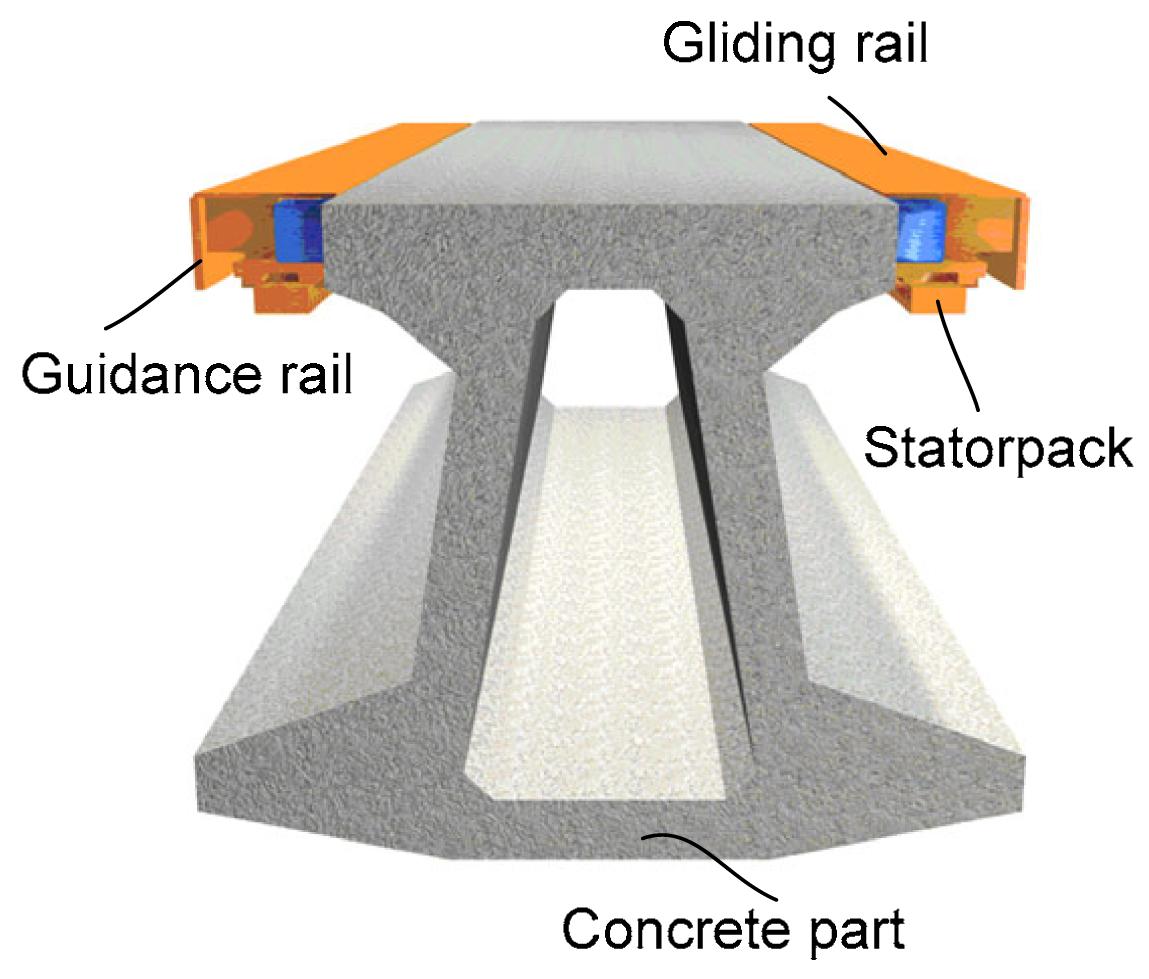 After transportation to the installation site on the route, the guideway girders are mounted and fine-positioned at the girder joints, and thereby assigned to the defined space curve. High standard geometric specifications are used to control deformation and deviation of the guideway, but track irregularities are unavoidable. Track irregularities may be caused by deviation and inclination of the stator plane (Fig. 3), subsidence of the foundation, machining error of functional components, or temperature deformation of the girder. 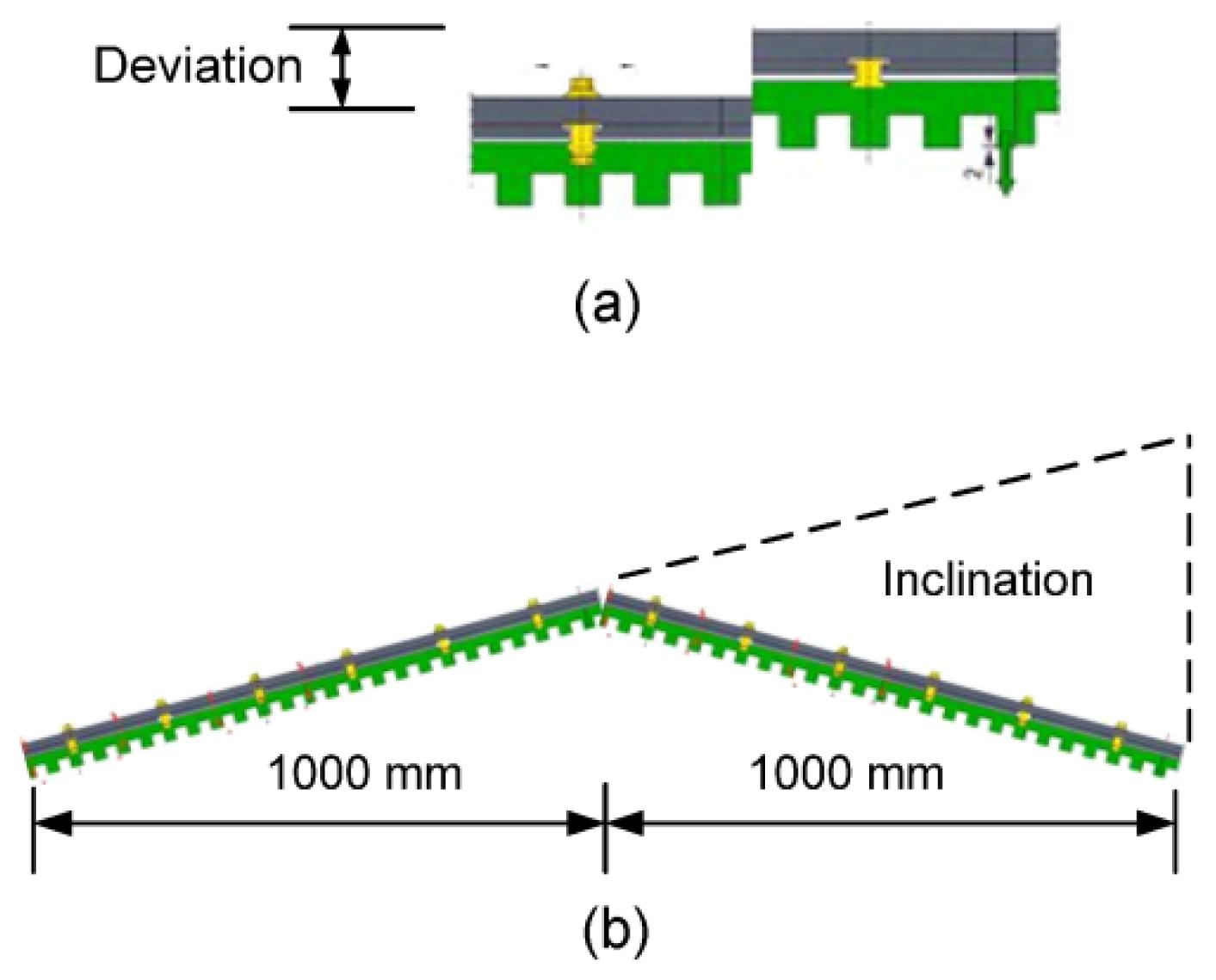 According to the specifications of the high speed maglev (Schwind, 2006), the deviation tolerances for the stator plane are 0.4 mm (in every girder) and 0.6 mm (between two girders). The permissible maximum change of inclination of the stator plane is 1.5 mm/m. For the guidance rail plane, the permissible maximum value is 2.0 mm/m. The permissible temperature deformation of the girder is about L/5400–L/6500 (L is the length of a girder, in m). For subsidence of the foundation, a value of about L/4500–L/6000 is permitted.

The hardware for recording and evaluating the measurement data, including acceleration and air gap data, has been completely integrated into the overall architecture of the vehicles. The acceleration data of the magnet is measured by acceleration sensors installed in electromagnetic modules (Fig. 5). Air gap data are obtained from vehicle-own gap measurement units. 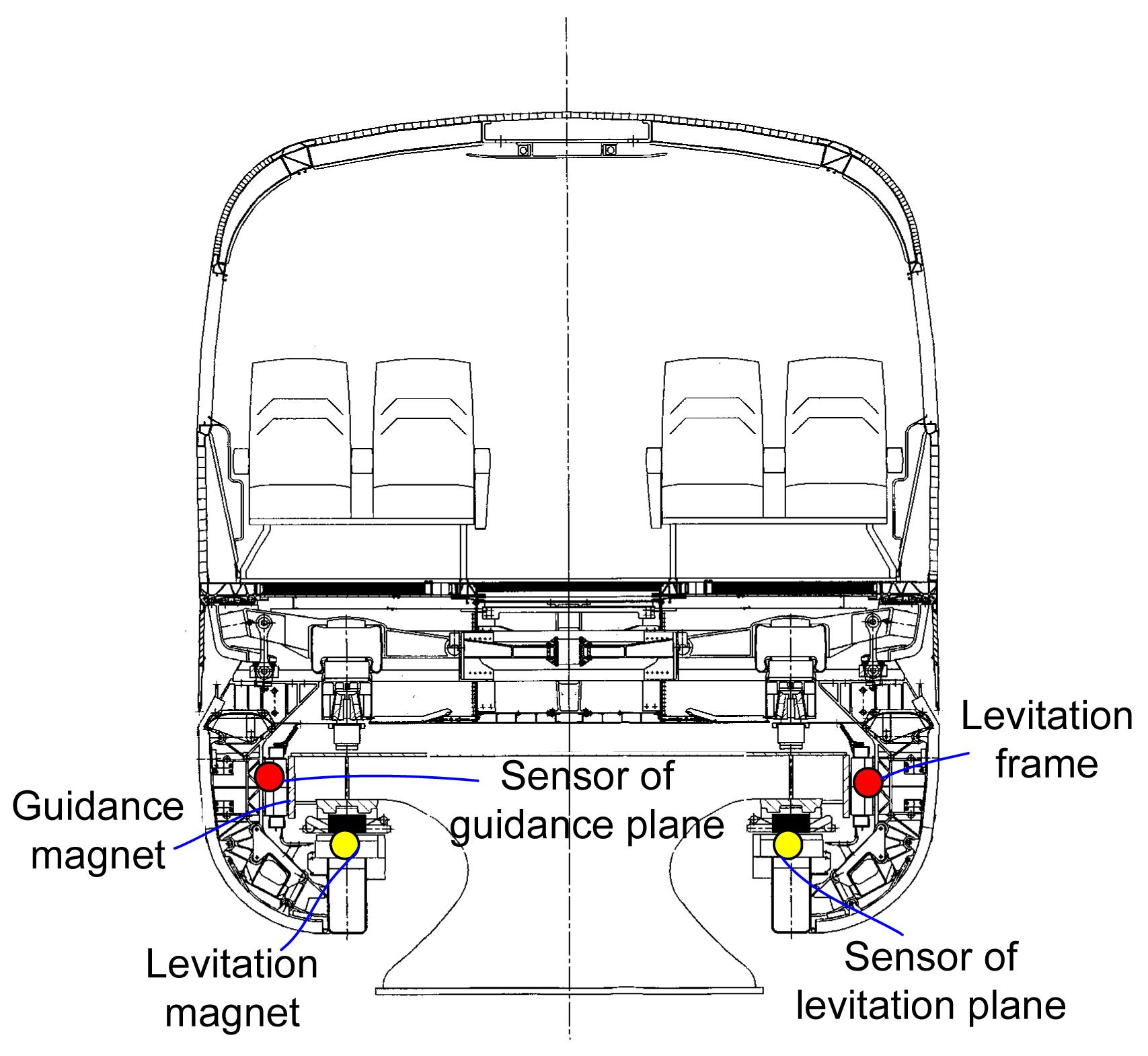 To reduce integral saturation due to the longwave composition of the space curve, partial filters are used in acceleration signal processing. The transfer function of a partial filter is given by (Arulampalam et al., 2002; Deng, 2005) where ω d is the cut-off frequency, which is determined according to experience.

A partial filter is designed by zero pole matching in frequency domain. ω d determines the attenuation characters and transition band. In other words, when ω d is small, the amplitude-frequency character in the passing band is flatter, the attenuation of direct-current parameters is better, and the transition band is narrower. But if ω d is too small, the transition band will be too narrow and the signal attenuation will not be sufficient near the pole frequency. As a result, the low-frequency components will not be filtered effectively. So ω d should be chosen according to actual application. Following analysis and simulation of the acceleration signal on a curved part of the line, we adopted ω d=1/20 000 rad/s. The low-frequency components are filtered from the irregularities thus obtained, thereby improving the filtering result and system stability.

After partial filtering of the signal, a rectangle method is used for acceleration integration. The method is used to compute an approximation of a definite integral. It accumulates the area of a series of rectangles whose heights are determined by the values of the acceleration signal, and whose widths are time steps. Specifically, the time interval over which the signal is to be integrated is divided into M equal subintervals of length T m. The approximation of the integral is then calculated by adding up the areas of the M rectangles, i.e., where m=2, 3, …, M, f″(m), f′(m), and f(m) are the acceleration, velocity, and displacement of the magnet at the mth time step, respectively.

The frequency of testing signals based on equal time sampling is 10 000 Hz. To eliminate velocity effects, a resampling method is used to transform the time signal into spatial domain signal. Because wave crests and troughs of velocity signal obtained from vehicle-own measurement units are caused by the tooth and slot sequence of the stator pack, the displacement and air gap signal in spatial domain can be obtained by resampling the signal of the pulse edges at 86 mm intervals (the distance between teeth).

Based on the partial filtering, integration and resampling of the signal, the values of the initial irregularities are determined. 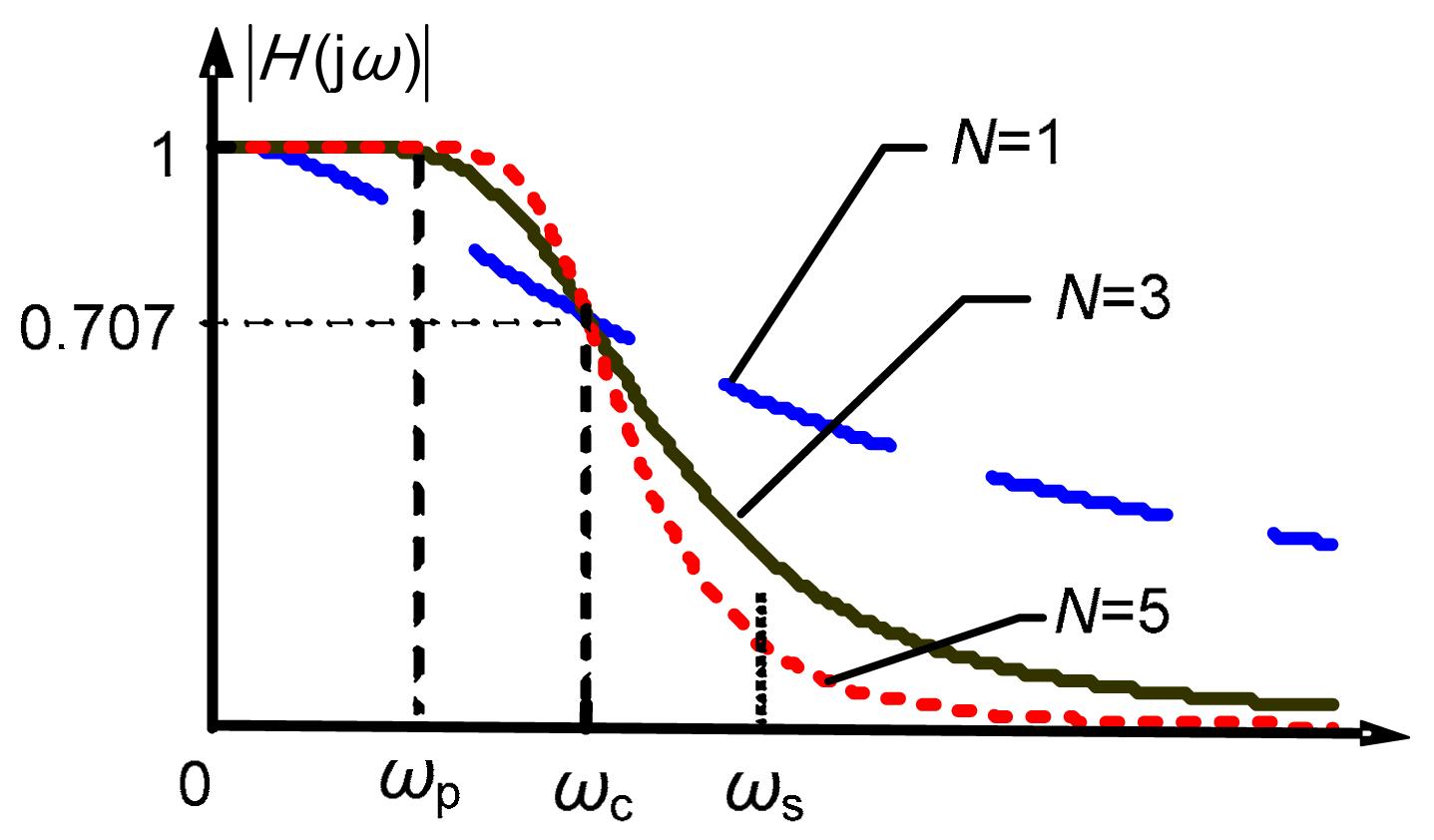 Fig.6
Gain of a discrete-time Butterworth filter
The passband and stopband attenuated into the damping of the transfer function, and suppressed noise at high frequencies. According to the filter design parameters given by Zheng et al. (2007), the pass band attenuation A s was 0.0275 dB, and the stop band attenuation A p was −50 dB.

According to the characteristics of the Butterworth filter (Siebert, 1986): where A s is the pass band attenuation, and A p is the stop band attenuation. Let N=30, and put N into the passband equation:

Accordingly, the cut-off wavelength can be calculated by where Ω is the space frequency (m−1).

According to the calculation results, the filter parameter N was 30 and the cut-off space frequency was 1/170 m−1.

Fig.7
History of air gap (a) and acceleration (b) of levitation magnet

Fig.9
Spectrograms of the air gap (a) and acceleration (b) of the levitation magnet (unit: dB)

Fig.10
Spectrograms of the air gap (a) and acceleration (b) of the guidance magnet (unit: dB)
The length of the maglev track beam was 25 m. Thus, for one beam, the irregularity in a wavelength range of 25 m was excited mainly by deviation of the stator and functional elements mounted on the beam. Due to continuous settings of the maglev track beam, the irregularity at a wavelength of an integer multiple of the beam length was excited mainly by support settlement. The length of the curve of the test section in the maglev line was about 500 m. Therefore, the components of the wavelength above contained long wave irregularity components excited by spatial curved settings. According to Eq. (6), the excitation wavelength and the cause of the stable composition are summarized in Table 1.

Relationship between excitation wavelength and frequency composition
The maximum peaks of air gap and acceleration occurred at about 0–0.25 Hz and were induced by the long wave composition of the space curve. Because this long wave composition has an effect on integration, it should be eliminated. Signals within 0.25–2.4 Hz corresponding to long wavelengths of 50–475 m are stable, which indicates that long wave irregularities are dominant on the high speed maglev line.

By this processing method, the initial irregularities can be determined. The cut-off frequency or wavelength of the Butterworth filter plays an important role in the final processing results. Vehicle resonance occurs when the excitation frequency (or wavelength) of irregularities is close to integer multiples of the vehicle natural frequency (Museros and Alarcón, 2005; Shi and Wang, 2011). Wavelengths which may result in vehicle resonance at different speeds are summarized in Table 2. Wavelength increases as speed increases, and if the maximum wavelength is 173 m, almost all wavelengths that affect maglev vehicle vibration can be embodied. In Section 4.1, based on the approximate value of 170 m wavelength, the cut-off wavelength of the passband and stopband were determined. 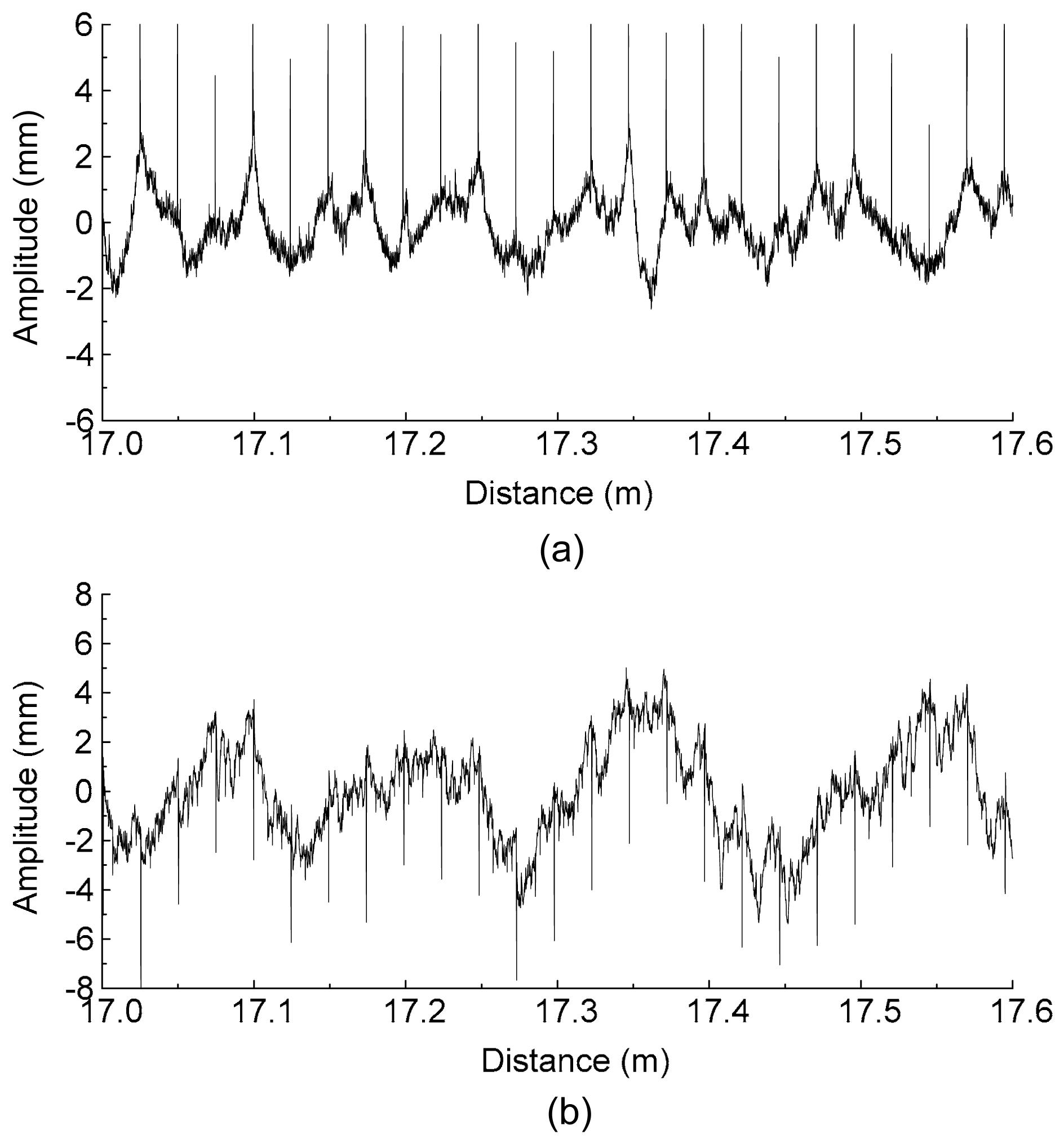 In railway engineering practice, track irregularities are frequently characterized by a one-sided PSD function of the track geometry. PSD functions of rail irregularities have been studied by many railway researchers. The Federal Railroad Administration (FRA), USA developed a system of classification for track quality (Fries and Coffey, 1990). The class of a track section determines the maximum possible running speed limit and traffic capacity of passenger trains. The PSD functions for class-5 and class-6 tracks (FRA5 and FRA6, respectively) are applied to passenger railways at maximum speeds of 144 km/h and 176 km/h, respectively. German railway spectra of high irregularity (GRSHI) and low irregularity (GRSLI) are applied to general railways and high speed railways with train speeds of over 250 km/h, respectively (Yang et al., 2004; Xia and Zhang, 2005). 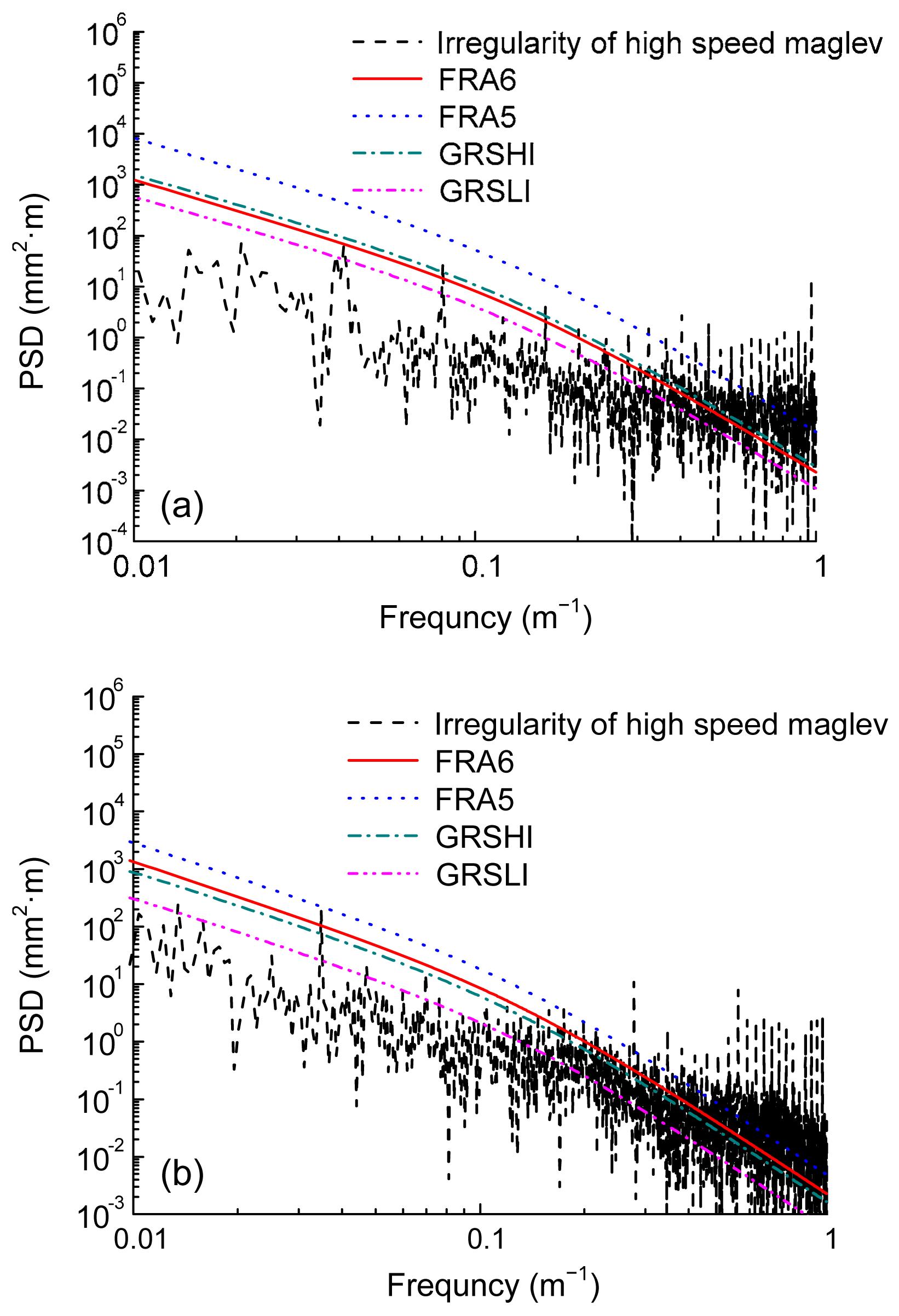 6.  Fitting of the irregularity spectrum of a high speed maglev guideway

PSD is a statistical curve gained from a large number of samples. It is usually described as a nonlinear function which, for convenience, approximates to the spectral density function. We adopted a 7-parameter fitting function to describe maglev line irregularities, by reference to foreign and domestic rail transit PSDs (Chen et al., 2008): where S(Ω) is the PSD (mm2·m), and A, B, C, D, E, F, and G are spectral characteristic parameters.

According to Eq. (7), the track irregularity data of the high speed maglev line was collected and fitted by the least square method (Table 3). A comparison between fitted and actual PSDs is shown in Fig. 13. The fitted PSD is almost identical to the actual PSD. The fitted PSD is obviously divided into two sections, whose wavelengths are 50–100 m and 1–50 m corresponding to space frequencies of 0.01–0.2 m−1 and 0.2–1 m−1, respectively. The fitted PSD provides not only a unified expression of track irregularities for a high speed maglev line, but also a system excitation source for dynamic analysis of the vehicle and guideway. 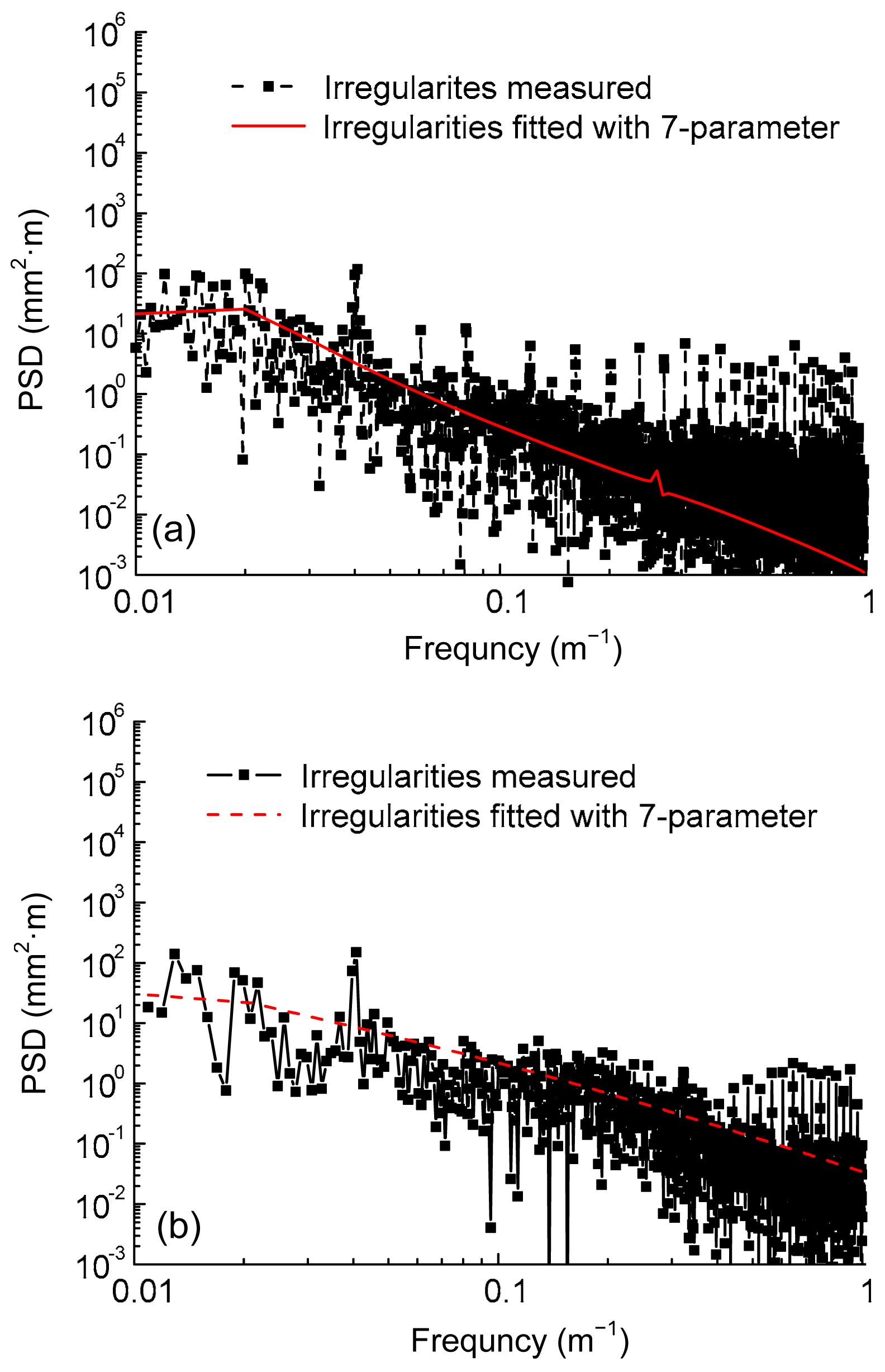 Fig.13
Comparison between fitted and actual PSDs
(a) PSD of the stator plane; (b) PSD of the guidance plane

The track irregularities of the high speed maglev line were measured, and then the field data were processed to study their characteristics and wavelength sensitivity. Finally, the PSD functions of the maglev line were compared with those of railway lines. The following conclusions can be drawn: