Abstract: In this study, a porous inserted regenerative thermal oxidizer (PRTO) system was developed for a 125 kW industrial copper-melting furnace, due to its advantages of low NO x emissions and high radiant efficiency. Zirconium dioxide (ZrO2) ceramic foams were placed into the combustion zone of a regenerative thermal oxidizer (RTO). Different performance characteristics of the RTO and PRTO systems, including pressure drop, temperature distribution, emissions, and energy efficiency, were evaluated to study the effects of the porous inserts on non-premixed CH4 combustion. It was found that the PRTO system achieved a significant reduction in the NO x emission level and a fuel saving of approximately 30% compared to the RTO system. It is most suitable for a lean combustion process at an equivalence ratio <0.4 with NO x and CO emission levels within 0.002%–0.003% and 0.001%–0.002%, respectively.

There is a growing demand in the energy industry for efficient and eco-friendly technologies due to environmental pollution and fossil-fuel depletion. Heat-circulating combustion processes, especially the alternating flow type, have been proven to be remarkable advances from both the technical and economic perspectives. These systems are known as regenerative thermal oxidizers (RTOs); in them, it is easy to obtain highly preheated combustion air and this leads to energy savings that make them attractive for combustion processes (Masashi and Toshiaki, 1998). However, the higher temperature of the preheated combustion air results in greater nitric oxide emissions; therefore, a reduction of NO x emissions is required when these systems are used.

Numerous methods such as fuel/air staging, steam injection, and flue gas recirculation, etc., have been developed to reduce NO x emissions, and substantial numerical and experimental investigations have been carried out (Suzukawa et al., 1997; Michael, 2001). The basic idea is to prevent the occurrence of hot spots in the flame, and thus reduce the formation of thermal NO x , which is dependent on the peak temperature. After it was recognized that solid materials provide the widest spectrum of thermal radiation, thereby reducing the emissions of CO and NO x common pollutants, much research has been focused on porous media burner technology (Kamal and Mohamad, 2006; Wood and Harris, 2008). A subsequent decrease in the combustion temperature caused by the recirculation of heat away from the hot combustion products inhibits the formation of NO x ; conversely, reduced temperatures in the combustion zone result in an incomplete combustion process that may increase CO and other unburned hydrocarbon emission levels. However, in the case of lean gas mixtures, many studies found that CO emissions tended to be very low (Smucker and Ellzey, 2004; Mathis and Ellzey, 2005; Mujeebu et al., 2011).

Previous studies have reported the applications of porous media burner technology in various fields (Mujeebu et al., 2009a; 2009b), especially their use as radiant burners where a radiant efficiency of up to 40% was achieved (Howell et al., 1996) with lower pollutant emissions compared to swirl-stabilized combustor (Li et al., 2008). However, there are no reports of porous media burner technology being used in industrial regenerative burners. In this study, considering their advantages of low NO x emissions and high radiant efficiency, a porous inserted regenerative thermal oxidizer (PRTO) system for copper melting was developed, and zirconium dioxide (ZrO2) ceramic foams were inserted in the combustion zone for this purpose. Heat circulation in a diffusion combustion field is commonly used in large scale industrial applications; where non-premixed flames will preferentially be used in combustion operations due to their controllability and safety factors. Thus, a PRTO system was designed for non-premixed combustion. This is a novel area of research as premixed flow conditions are normally used as the working conditions for porous media combustion systems; there have only been a few studies on non-premixed or partially-premixed combustion.

Kamal and Mohamad (2005) investigated the swirl effect on the enhancement of radiation flux from a porous burner operating with non-premixed flames and found that the NO x emission level could reach below 0.001%. Tarokh and Mohamad (2009) numerically studied the non-premixed combustion phenomena in a porous media. The results of this study demonstrated that combustion efficiency could be improved by the use of a porous media with a high thermal conductivity and emissivity as this reduced the CO and NO x emission levels even when under non-premixed conditions. Charoensuk and Lapirattanakun (2011) and Muhad et al. (2011) investigated the performance of a partially-premixed liguefied petroleum gas (LPG) porous media burner, and found that NO x and CO emission levels were reduced by 59% and 21%, respectively, compared to the free flame combustion process. Wang et al. (2011) experimentally studied the temperature profiles characteristics of non-premixed combustion in porous media. Dobrego et al. (2001) reported a 2D two-temperature multi-component model for non-premixed filtration combustion.

There is a need to study non-premixed filtration combustion under reciprocating flow conditions. The aim of this study was to examine the effects of porous inserts on regenerative thermal oxidizer (RTO) systems operating with non-premixed flames. In this study, experiments were performed to develop a PRTO system under reciprocating flow conditions in a 125 kW industrial copper-melting furnace, and the different performance characteristics of RTO and PRTO systems, including the pressure drop, temperature distribution, emissions, and energy efficiency, were evaluated.

Fig. 1a shows an industrial copper-melting RTO heating system comprising of two ceramic honeycombs that are used as heat storage mediums in regenerators to preheated the combustion air temperature so that it is close to the furnace gas temperature, thus increasing the furnace productivity and saving a considerable amount of fuel. The melting process takes place in a crucible present in the middle of the furnace owing to the convection and radiation heat transfer between the combustion products and inner furnace walls. The furnace has a thermal input of 125 kW and a maximum copper-melting capacity of 750 kg/h. As shown in Fig. 2a, a diffusion flame is formed due to the preheated fresh air from the regenerator being mixed in the combustion zone with the fuel flow. 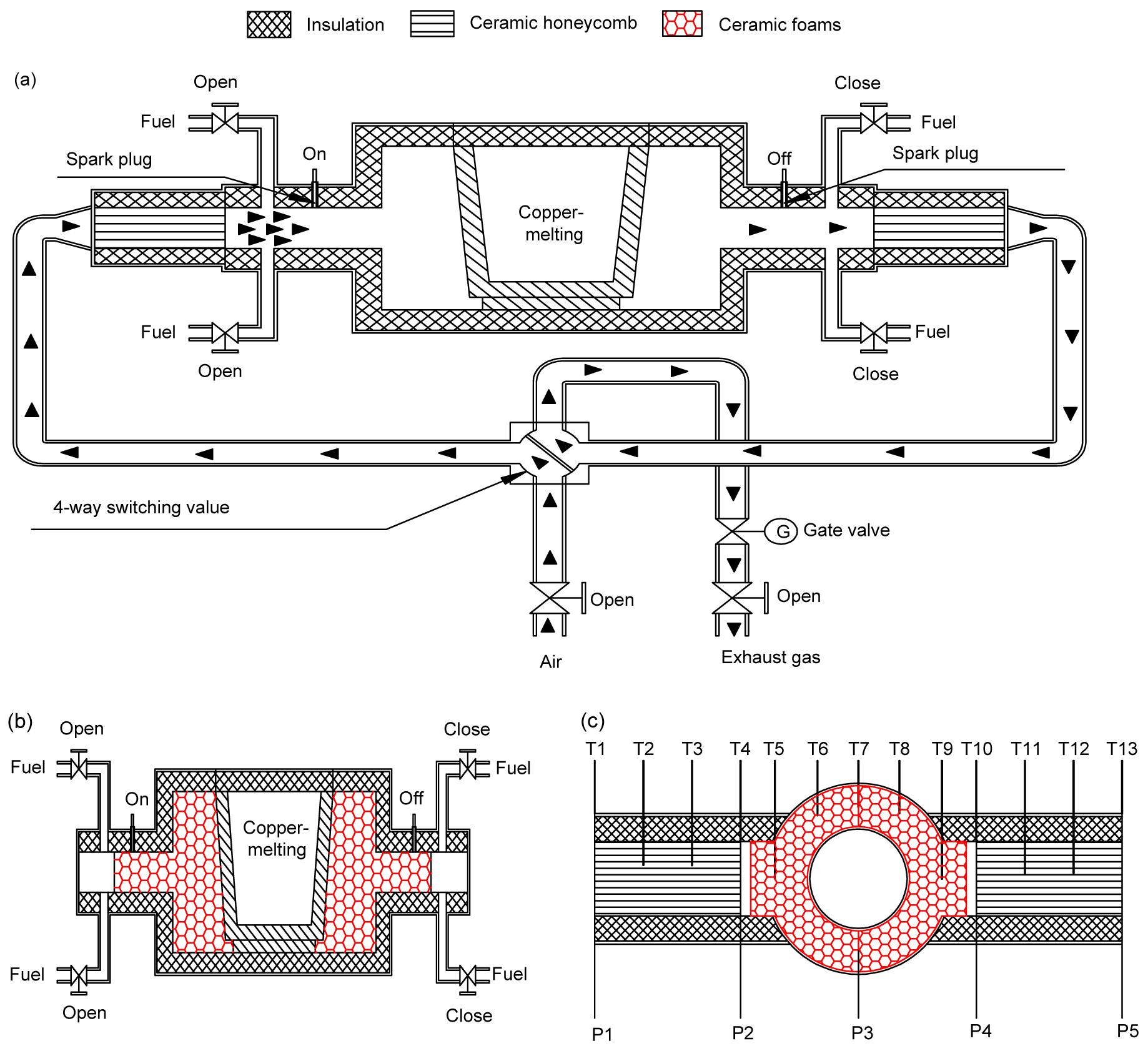 Fig.2
Flame images of free flame of RTO (a) and filtration combustion flame of PRTO (b)
In this study, a PRTO was developed for the first time. As shown in Fig. 1b, the crucible furnace was filled with 10 PPI (pores per inch) ceramic foams (with 84% porosity) in the combustion zone. Initially, a SiC foam was used, but it was consumed as soon as there was a sudden increase in fuel composition.Then a ZrO2 foam was determined to be the best material that could withstand the high temperature of the preheated air combustion. Compared to the long flat flame in a conventional RTO system, the combustion zone in a PRTO system is stabilized in the finite element of the ZrO2 porous matrix as shown in Fig. 2b. The copper inside the crucible was heated by the convection and radiation heat emanating from the ZrO2 porous medium. In addition, the newly developed burner can act as a reciprocal flow burner when there are non-premixed combustion conditions.

Fresh air was generated by a centrifugal fan and entered through an alternating valve. Natural gas with a heating value of 36 MJ/N·m3 was used and controlled by valves mounted on the control panel. The gas and airflow rates were measured by calibrated rotameters. The time intervals in-between each flow could be adjusted independently using a switch. The arrangement of thermocouples and pressure taps are shown in Fig. 1c. B-type model T5–T9 sheath thermocouples with a 0.5 mm wire diameter and K-type T1–T4 as well as T10–T13 thermocouples were used. They were placed along the center line of the fluid path to measure the temperature profiles. Pressure differences were measured by differential pressure transmitters P1–P5, and their signals were digitized by an Agilent-34970a Data Logger (USA) and then transmitted to a personal computer. The combustion emission levels were analyzed by a TESTO PG-250 instrument with a range of 0–0.1% and 0–0.4% for NO x and CO, respectively, with a measuring accuracy of about ±0.5%.

During an operation cycle of 150 s, the two fuel nozzles on the left were open so that the left burner worked in the combustion mode and the two fuel nozzles on the right were closed so that the right burner worked in the suction mode. Then the operating mode was reversed in the following cycle so that the right burner was in the combustion mode and the left was in suction. The combustion air was preheated by the heat accumulated in the ceramic honeycomb during the previous cycle. The interchange between burners was controlled by the 4-way switching value during the entire melting process. The copper-melting process can be divided into two stages: (1) start-up stage where the burner was preheated starting from the cold state, and (2) quasi-steady stage where the furnace wall and crucible have been heated to a quasi-steady state. In the preheating period, the thermal load needs to reach a temperature where it is possible for copper-fusion. Numerical values of the operating conditions are summarized in Table 1.

There is a lack of standard procedures for measuring the radiant efficiency in different burner designs and operation conditions (Mital et al., 1998). Therefore, a thermal efficiency methodology was developed where the parameters such as heat input, thermal absorption by copper, and thermal efficiency were estimated.

Then the thermal efficiency is expressed as follows: 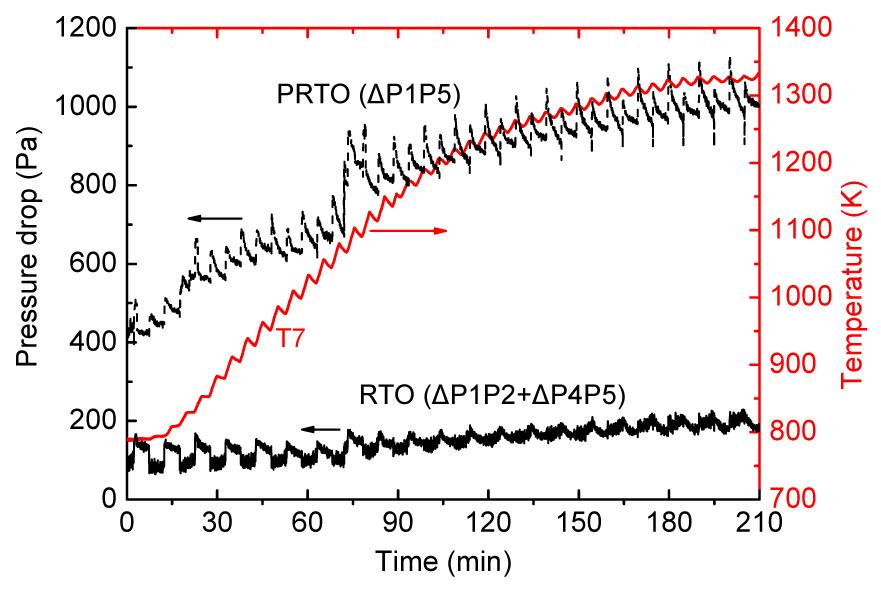 Fig. 4 shows the temperature distribution comparison for copper melting between the RTO and PRTO systems at an equivalence ratio of Φ=0.4. The temperature distributions for both the RTO system and the PRTO system are the values at the first of the forward flow. The porous media had high temperature region that was broader than in the RTO while the maximum temperature was lower. For instance, the maximum temperature under an equivalence ratio of Φ=0.4 drops from 1804 K (in the free flame of the RTO system) to 1598 K (in the filtration flame of the PRTO system). However, there is a larger hot zone due to the heat conduction of the porous material. 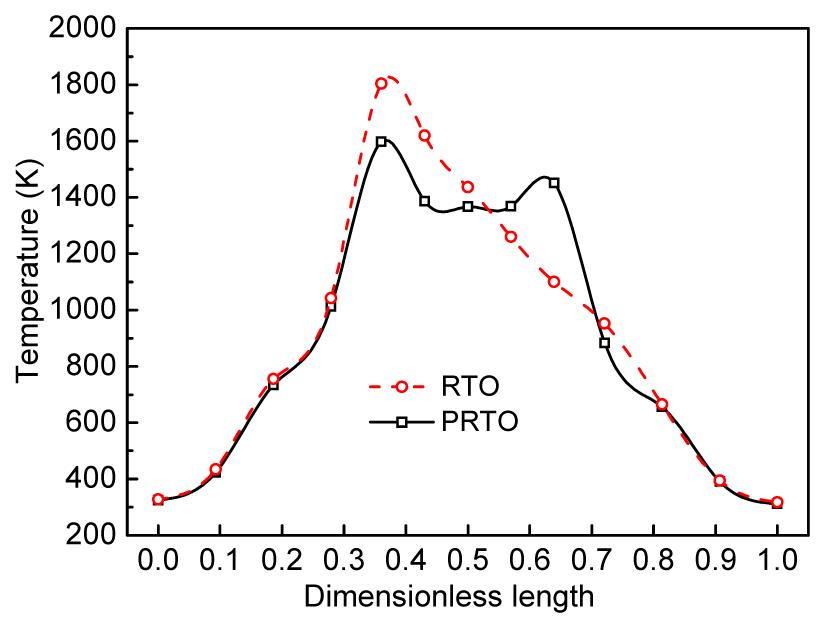 Fig.4
Comparison of temperature distribution between the RTO and PRTO systems
Fig. 5 shows the special transient temperature profiles of the PRTO system for the forward flow during a half-period of t hp=150 s under an equivalence ratio of Φ=0.4. The trapezoidal temperature profiles have two hot zone locations at the inlet of the porous media combustor (e.g., T5 and T9); while the temperatures in the crucible zone (e.g., T6, T7, and T8) are relatively low (about 200 K on average). The peak temperature changes moderately over time within a range of 160 K, while the temperatures in the crucible zone are almost flat irrespective of time. The thermal efficiency and energy saving are greatly improved due to the exhaust gas temperatures (e.g., T1 and T13) being greatly reduced (within 310–330 K). 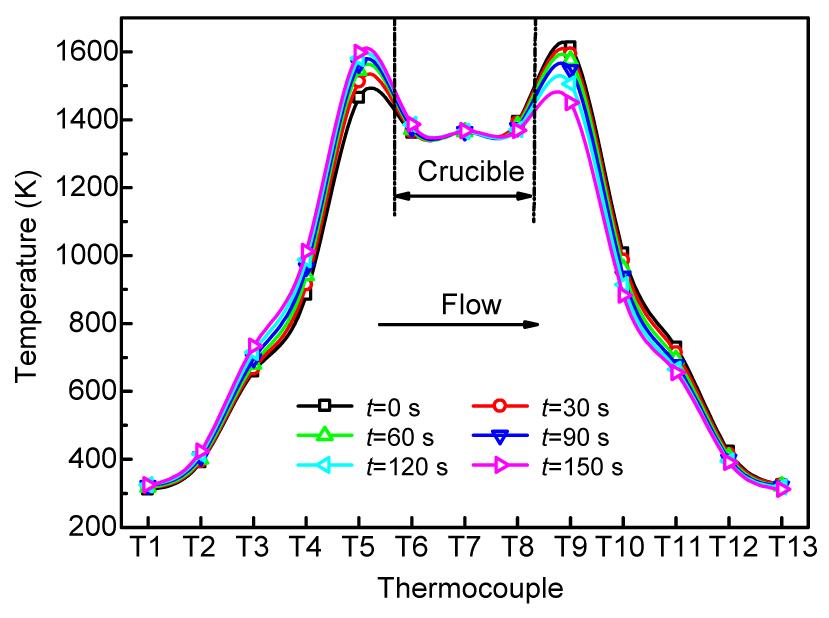 Fig.5
Transient temperature profiles of the PRTO system for the forward flow during a half-period of t hp=150 s 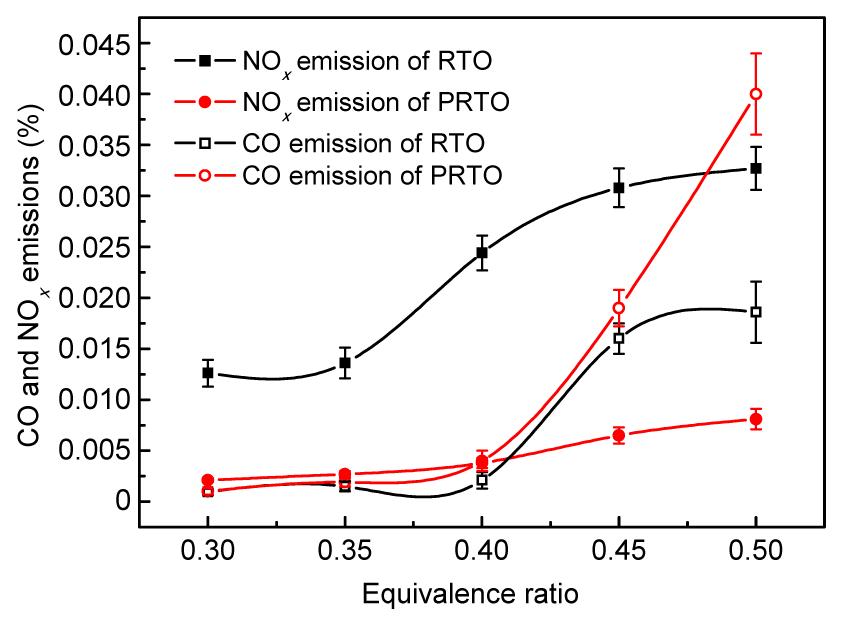 Thermal efficiency is the key parameter for evaluating the economic benefits of burners. The comparison of thermal efficiencies between the RTO and PRTO systems is shown in Fig. 7. Due to the honeycombs and ceramic foams requiring additional preheating, the thermal efficiency was much lower in the start-up stage than the quasi-steady stage. 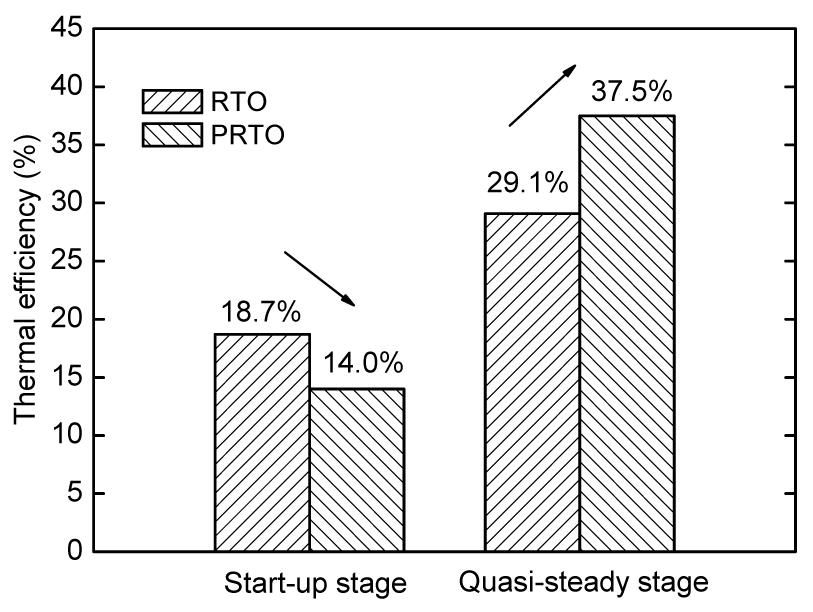 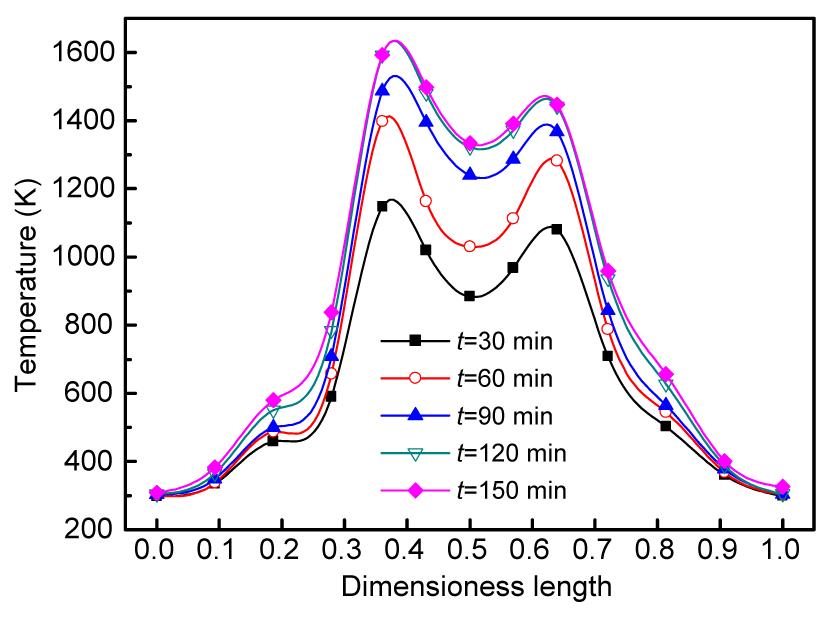 A PRTO system under reciprocating flow conditions using non-premixed CH4 combustion has been successfully developed for a 125 kW industrial copper-melting furnace. The combustion and emission characteristics were evaluated and compared to a conventional RTO system. It was found that the high temperature region in the porous media is broader while its maximum temperature range is thinner resulting in a significantly lower NO x emission level. For lean combustion processes under an equivalence ratio of Φ<0.4, the CO and NO x emission levels were in the ranges of 0.001%–0.002% and 0.002%–0.003%, respectively. This means that fuel savings of approximately 30% can be achieved during the quasi-steady state when using the PRTO system instead of the RTO system. However, a much more powerful centrifugal fan is needed due to a higher pressure drop in the system. More work is still needed to improve the mixing of the fuel and oxidizer as when there is a higher equivalence ratio regime the CO emission level was slightly higher.