1. A weather research and forecasting....2. Drought analysis using multi-scale....3. A Cenozoic tectono-sedimentary model....4. Theory and techniques for....5. Plant community succession in modern....6. Inversion of thicknesses of....7. The fracture network model of Shen....8. Manganese removal from the Qiantang....9. Multivariate statistical analysis for....10. Modeling pollutant transport in....

Abstract: Recent years have seen a surge in assessment of potential impacts of climate change. As one of the most important tools for generating synthetic hydrological model inputs, weather generators have played an important role in climate change impact analysis of water management. However, most weather generators like statistical downscaling model (SDSM) and long Ashton research station weather generator (LARS-WG) are designed for single site data generation. Considering the significance of spatial correlations of hydro-meteorological data, multi-site weather data generation becomes a necessity. In this study we aim to evaluate the performance of a new multi-site stochastic model, geo-spatial temporal weather generator (GiST), in simulating precipitation in the qiantang River Basin, East China. The correlation matrix, precipitation amount and occurrence of observed and GiST-generated data are first compared for the evaluation process. Then we use the GiST model combined with the change factor method (CFM) to investigate future changes of precipitation (2071–2100) in the study area using one global climate model, Hadgem2_ES, and an extreme emission scenario RCP 8.5. The final results show that the simulated precipitation amount and occurrence by GiST matched their historical counterparts reasonably. The correlation coefficients between simulated and historical precipitations show good consistence as well. Compared with the baseline period (1961–1990), precipitation in the future time period (2071–2100) at high elevation stations will probably increase while at other stations decreases will occur. This study implies potential application of the GiST stochastic model in investigating the impact of climate change on hydrology and water resources.

Global warming caused by increasing greenhouse gas emissions has become evident. Global average surface temperature increased 0.74 °C during the period of 100 years from 1906 to 2005 and global average precipitation increased 2% within the same period (Ju et al., 2013). Because of its heavy dependence on agriculture, rapid development of its economy, and urbanization, China is very sensitive to climate change. As a result, assessment of the impact of climate change will play an important role in making robust decisions. Many researchers have worked on investigating the impact of climate change on hydrology or water resources in China (Zhai et al., 2005; Wang et al., 2012; Xu et al., 2013).

Nowadays, weather generators play an important role in analysis of the impact of climate change (Semenov and Barrow, 1997; Kilsby et al., 2007). There are some well-known weather generators like long Ashton research station weather generator (LARS-WG) (Racsko et al., 1991), climate generator (CLIGEN) (Nicks and Gander, 1994), and statistical downscaling model (SDSM) (Wilby and Dawson, 2013). They all have advantages, but are single-site based. When hydrological models need multi-site inputs, or spatial correlation is important for hydrologic simulation, a multi-site weather generator is a necessity. Several multi-site weather simulation methods have been developed. Wilks (1998) was the first to present a method that reproduced the main statistics of multi-site precipitation data. Wilks (1998)’s approach drives the stochastic weather generator with serially independent and spatially correlated random numbers. The correlation matrices of both precipitation occurrence and amounts are used in this method to generate precipitation data (Brissette et al., 2007). The main defect of this method is that the correlations of simulated synthetic data are often weaker than the observed counterpart. A multi-site hidden Markov Chain model is one of the leading methods for generating synthetic precipitation data with spatial correlations. The climate is divided into two states in this model (wet or dry) and the persistence of a state is decided by transition probability (Thyer and Kuczera, 2003). The multi-site precipitation occurrence is decided by the weather state and the precipitation amount is based on both exogenous predictors and weather states. However, this model has a quite complicated process to calibrate the parameter and it is hard to evaluate its accuracy. Alternatively the spatial moving average process approach (Khalili et al., 2007), the K-nearest-neighbor (Mehrotra et al., 2006) approach, and the Schaake Shuffle approach (Clark et al., 2004) are often used in weather generation. All of the above methods have their own advantages and disadvantages. Their processes are normally very complex and hard to implement.

In this paper, a relatively new method, geo-spatial temporal weather generator (GiST) stochastic model is used to generate synthetic weather data and its performance is evaluated in the Qiantang River Basin, East China. The GiST model was developed by Baigorria and Jones (2010). It can not only reproduce synthetic precipitation data with appropriate temporal and spatial structure of observed precipitation but also is easy to implement. The GiST model is then combined with the change factor method (CFM) to downscale precipitation from one GCM model, Hadgem2_ES, and one emission scenario, RCP 8.5, to demonstrate the usefulness of the GiST model.

The Qiantang River Basin, located in the east of China, covers an area of 55 600 km2, including 48 000 km2 in Zhejiang Province. The catchment lies between longitudes 117°E and 122°E and latitudes 28°N and 31°N. The main stream, the Qiantang River, with a length of 688 km, is the longest river in Zhejiang Province. The river runs out of Xiuning in Anhui Province and empties into the Donghai Sea through Hangzhou Bay. Most of the basin is dominated by a sub-tropical humid monsoon climate. The mean annual precipitation in the Qiangtang River Basin is close to 1600 mm, and the mean annual temperature is 17 °C (Xu et al., 2012). Fig. 1 shows the location of the study area and the meteorological stations of the sub-basins. Table 1 shows details of relevant meteorological stations. 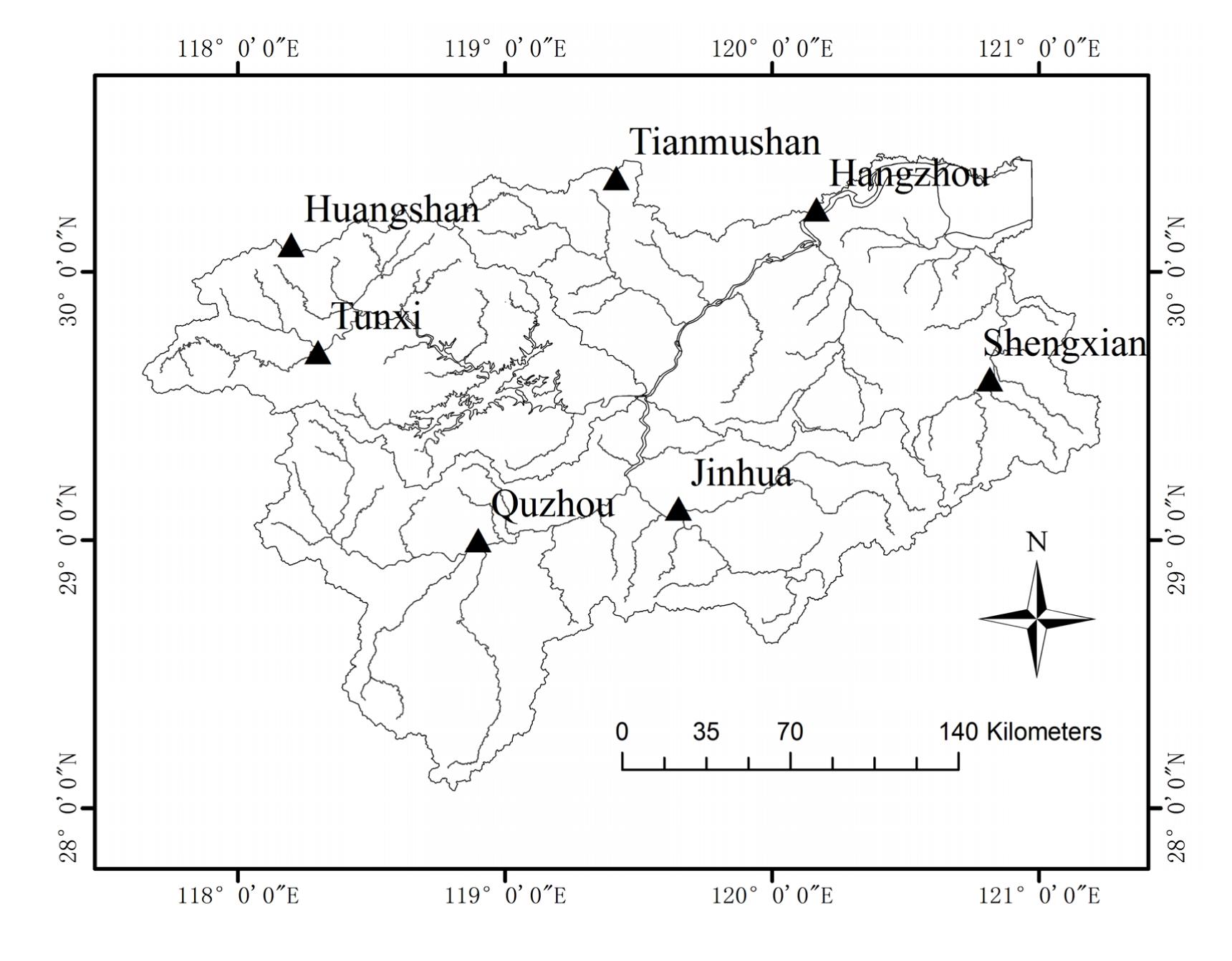 Fig.1
Location of the study area and meteorological stations used in the study

GiST, a stochastic model developed by Baigorria and Jones (2010), is used to generate spatially and temporally correlated daily weather data in this study. The main difference between GiST and other traditional weather generators is that the spatial structure of the weather data is considered. The spatial structure is represented by Pearson’s correlation (ρij ) which is calculated by where η represents the total number of pair-wise daily observations, χi and χj represent the pair-wise observations on day t for locations i and j, μi and μj represent the mean of daily values for locations i and j, respectively, and σi and σj represent the standard deviations of daily observations.

The CFM, or delta change factor method, is combined with GiST to obtain climate change projections in the future period 2071–2100 and to evaluate the future performance of GiST. CFM is a very common method for estimating climate change (Anandhi et al., 2011). Although more complicated methods exist, CFM is still widely applied in many studies.

To obtain climate change projections for the future period 2071–2100, the parameters of the GiST are then adjusted using CFs calculated by Eq. (3). Details of adjustments can be found in (Qian et al., 2005).

The newest representative concentration pathways (RCPs) emission scenarios are used in this study. Each RCP is named after the level of radiative forcing, or overall warming power of human activities, expected in 2100. Table 2 shows the details of four RCPs.

Information of four RCPs
Future climate data come from one of the coupled model intercomparison project phase 5 (CMIP5) models, Hadgem2-ES. Hadgem2-ES is short for the Hadley Centre Global Environmental Model, version 2, with an added Earth-system component. It represents more physical elements of the climate than air, sunlight, and water. Hadgem2-ES has a grid of 192 evenly spaced points from east to west and 144 evenly spaced points from north to south. A box defined by about 1° of latitude and 1° of longitude represents an area of 100 km by 200 km. The atmosphere is divided into 38 unequal levels and the level near the land and ocean surface is about 20 m deep (Jones et al., 2011).

For evaluation purposes, one extreme emission scenario RCP 8.5 is used in this study for illustration. The RCP 8.5 scenario describes a future world of the largest population, a low technology innovation rate, slow energy development, more emissions, and absence of a policy of adaptation to climate change. Its radiative forcing can be found in Table 2. 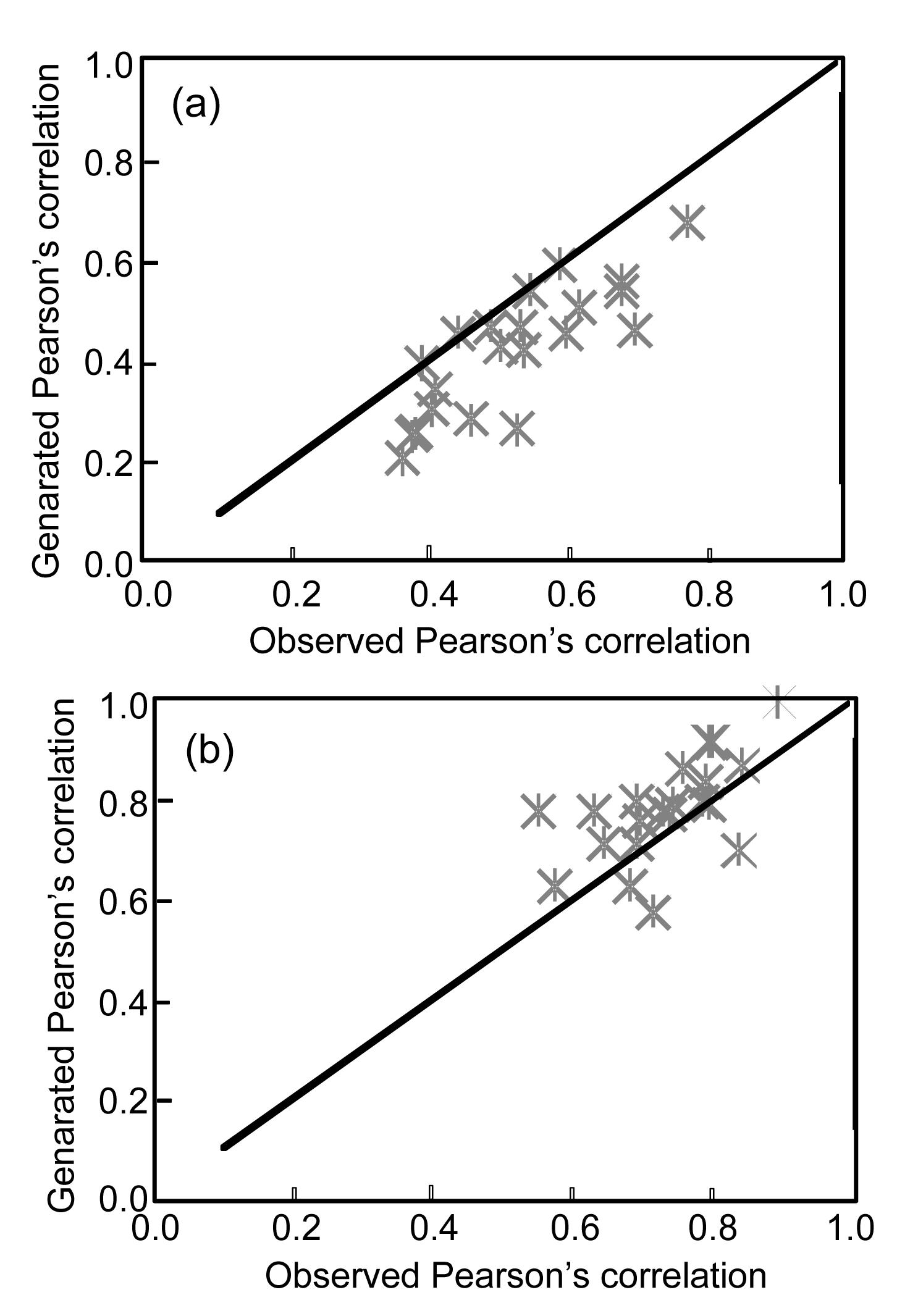 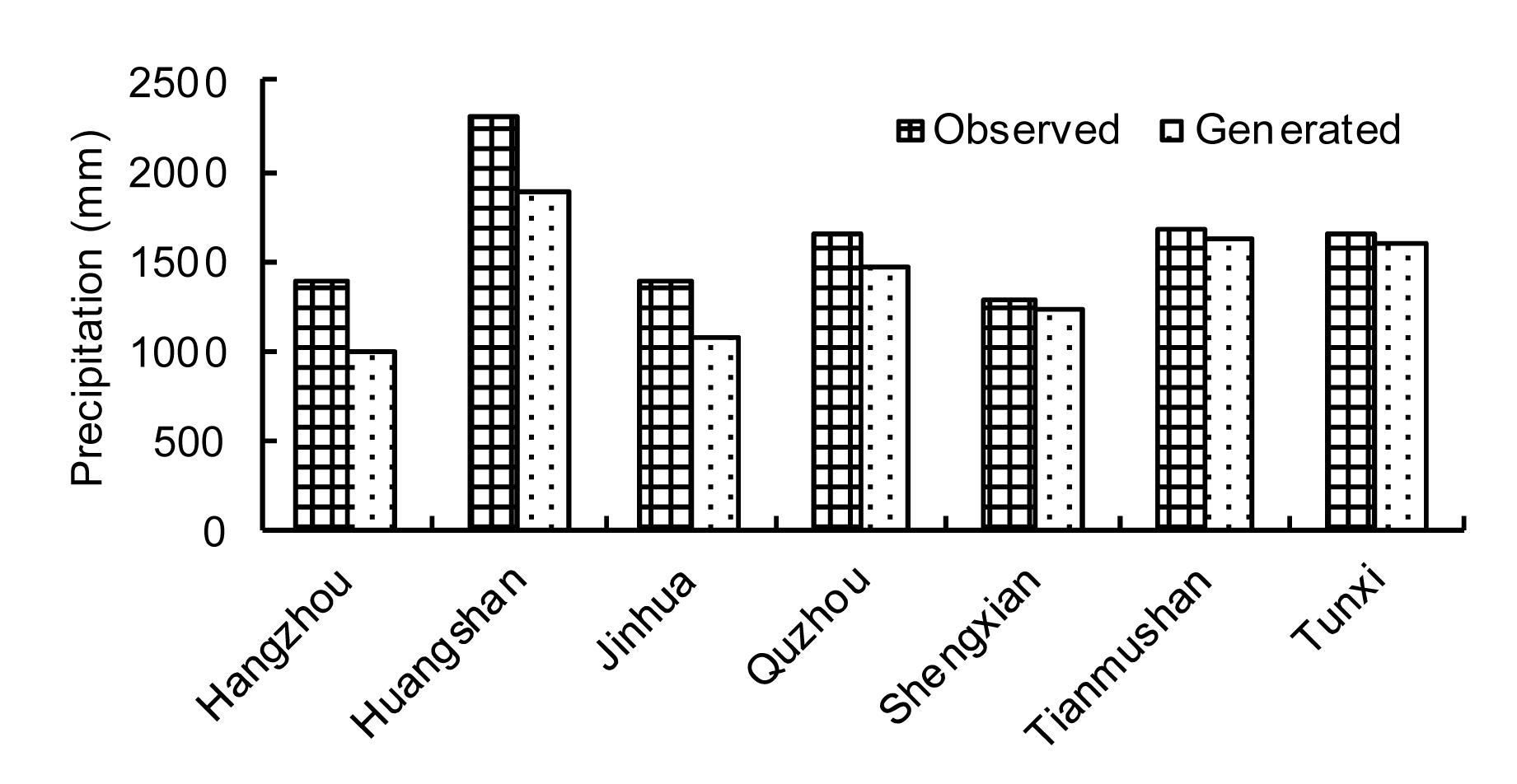 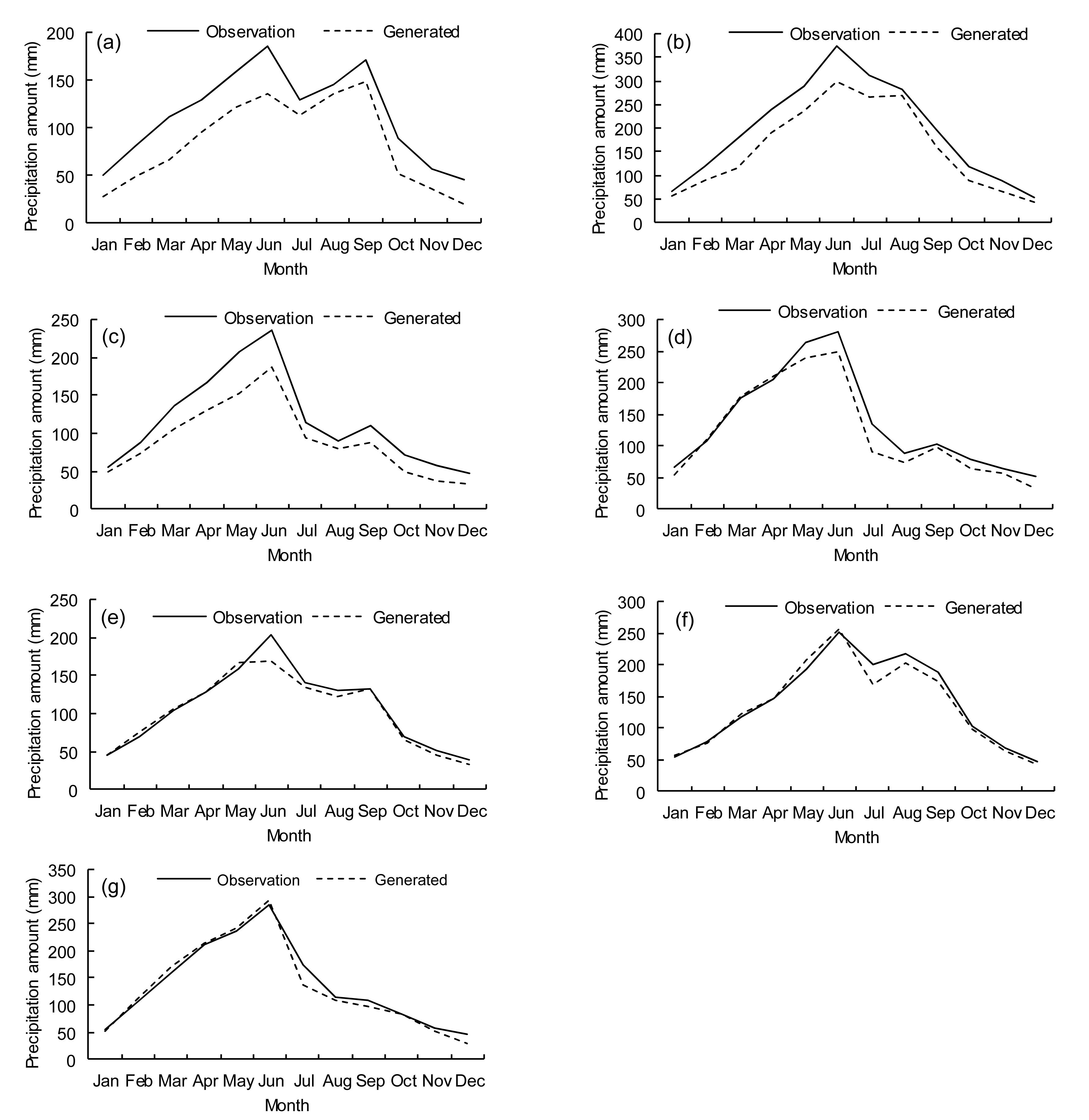 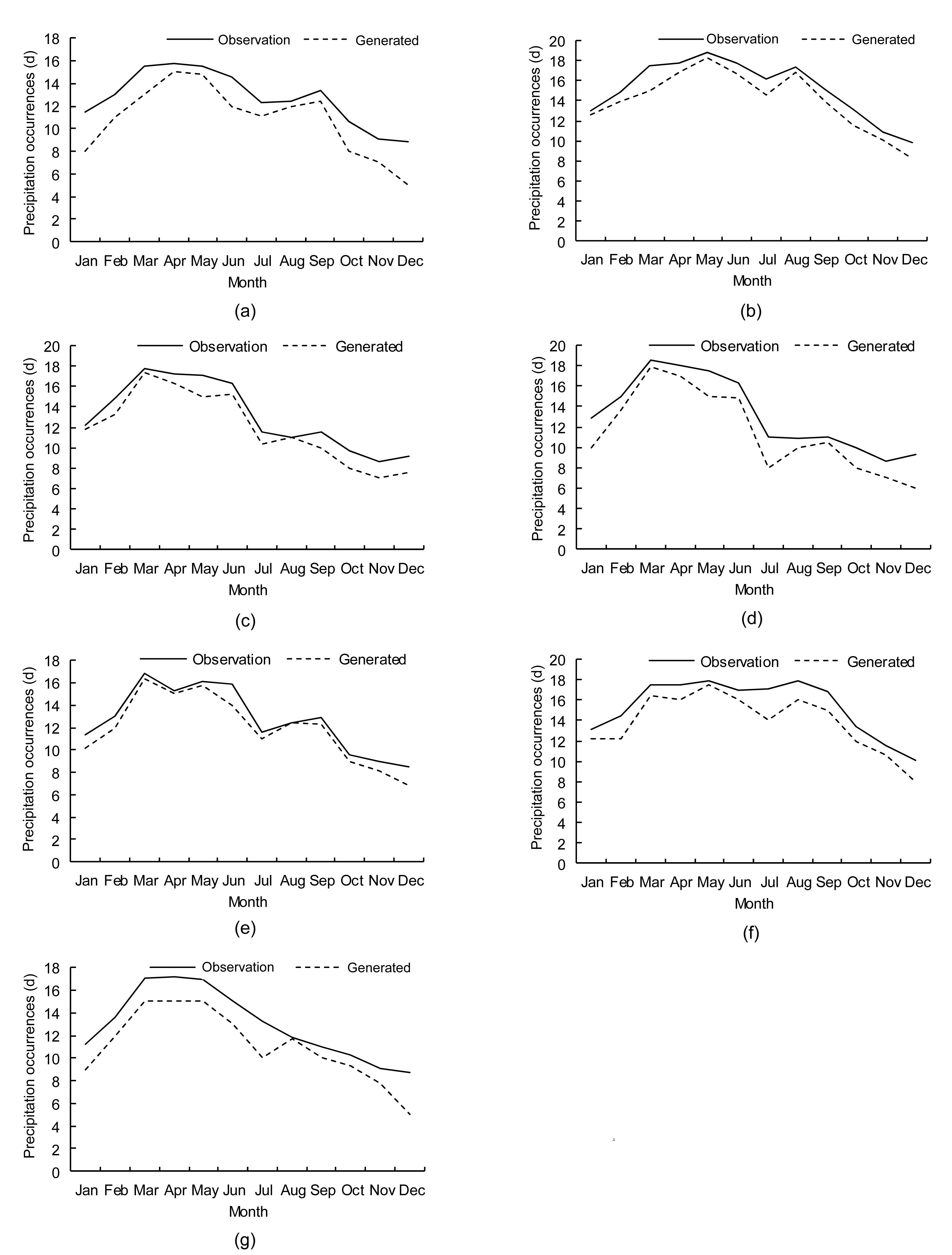 Future precipitation from one GCM Hadgem2-ES and one emission scenario RCP 8.5 is downscaled using the GiST stochastic model combined with the CFM. Fig. 6 shows Pearson’s correlations of the baseline generated and future generated daily and monthly precipitation among all pairs of locations. It can be found that the Pearson’s correlations are well preserved on a daily scale. However, the correlations on a monthly scale are somewhat underestimated in the future period. The changes of monthly spatial correlations are mainly caused by the CFM which is implemented on a monthly scale. 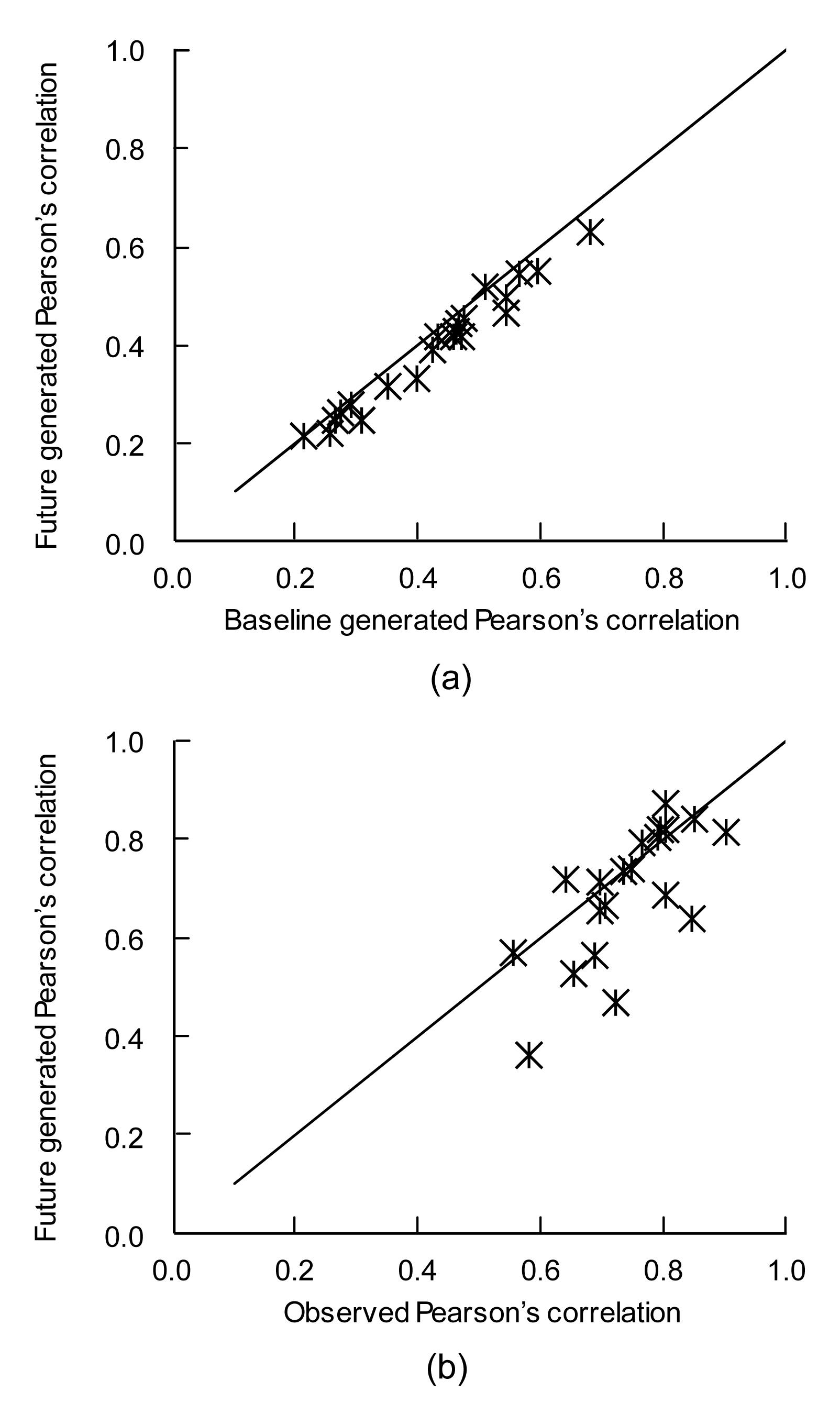 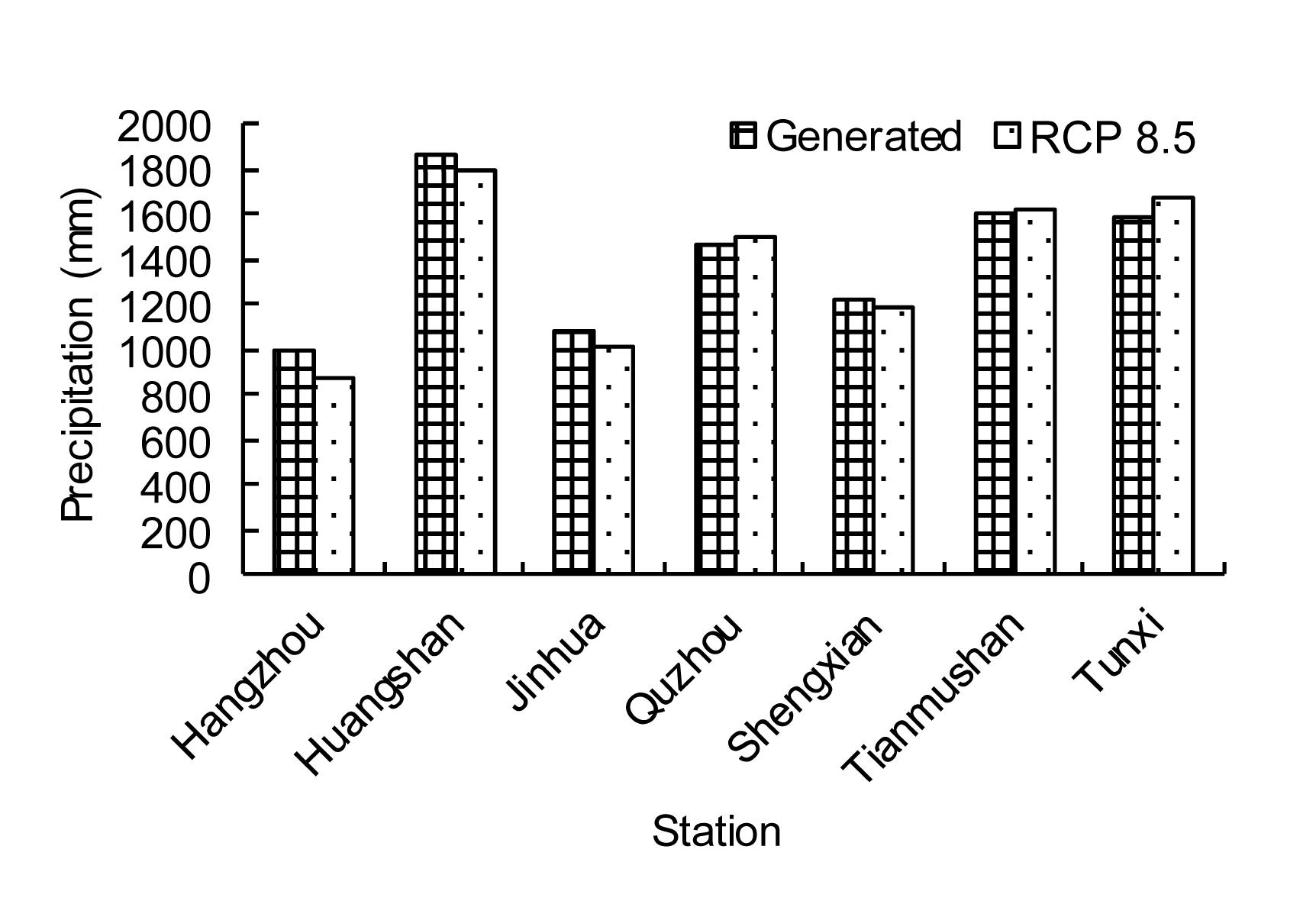 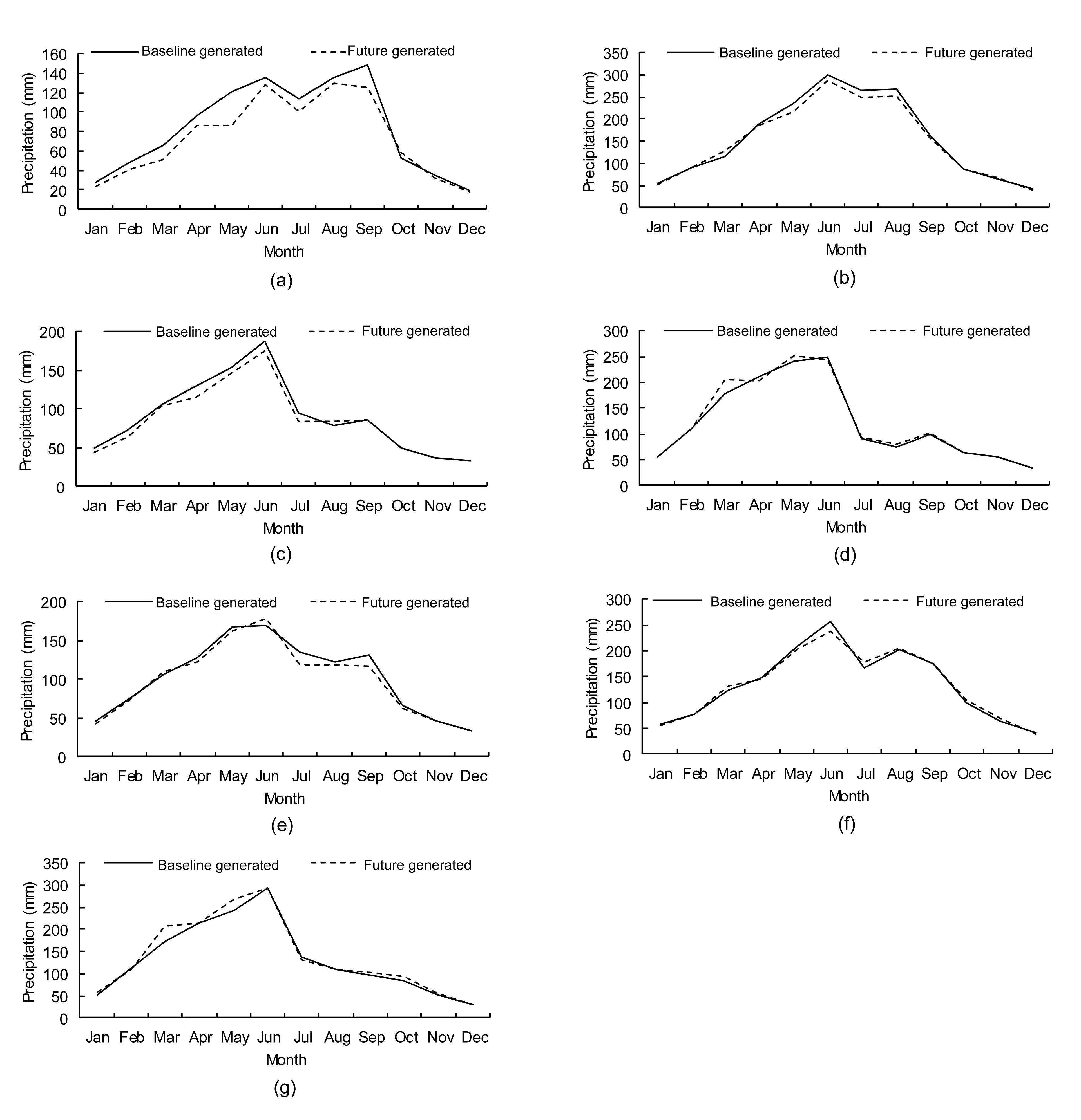 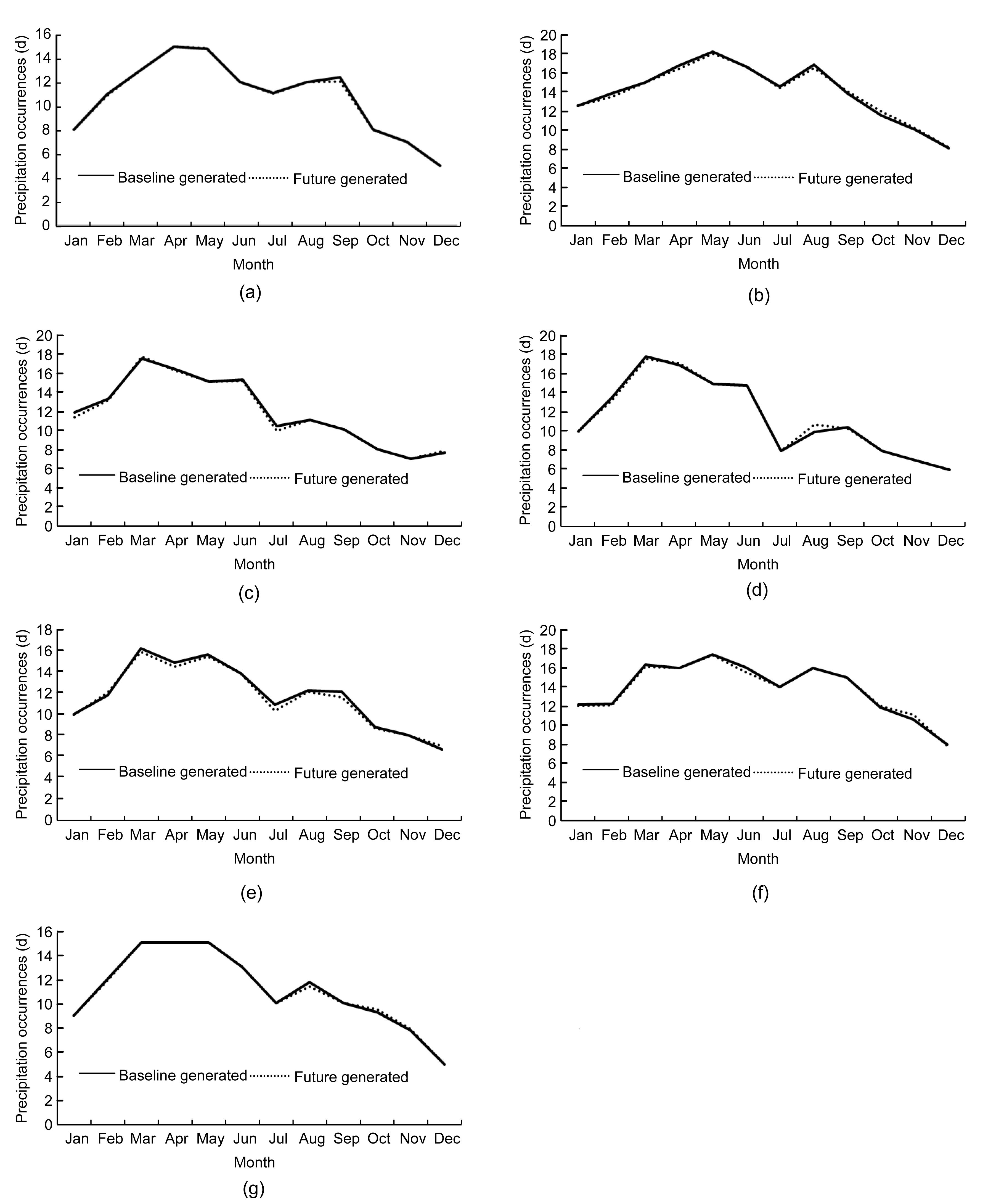 Fig.9
Comparison of baseline and future generated precipitation occurrences at Hangzhou (a), Huangshan (b), Jinhua (c), Quzhou (d), Shengxian (e), Tianmushan (f), and Tunxi (g)
To check more closely the future changes of precipitation in 2071–2100, Fig. 10 (p.228) shows the relative changes of monthly precipitation for Hadgem2_ES under RCP 8.5 at seven stations. Fig. 10 shows more clearly than Fig. 8 that the monthly precipitations decrease in most months at Hangzhou, Huangshan, Jinhua, and Shengxian. The largest decrease can be found at Hangzhou in May and approaches 30%. The decreases at the other three stations are much smaller than at Hangzhou. Most decreases are up to 12%. At Quzhou, Tianmushan and Tunxi, increases can be found in many months, particularly in March, the increases are up to 20% at Tunxi. From this figure, it implies that stations in relatively high elevations like Tunxi and Tianmushan often experience increases in precipitation while stations in plains often experience decreases in precipitation. Among these stations, Hangzhou (city) has the largest population and the most economic development. A large fall in precipitation in the future may add more stress to the water shortage problem that already exists. 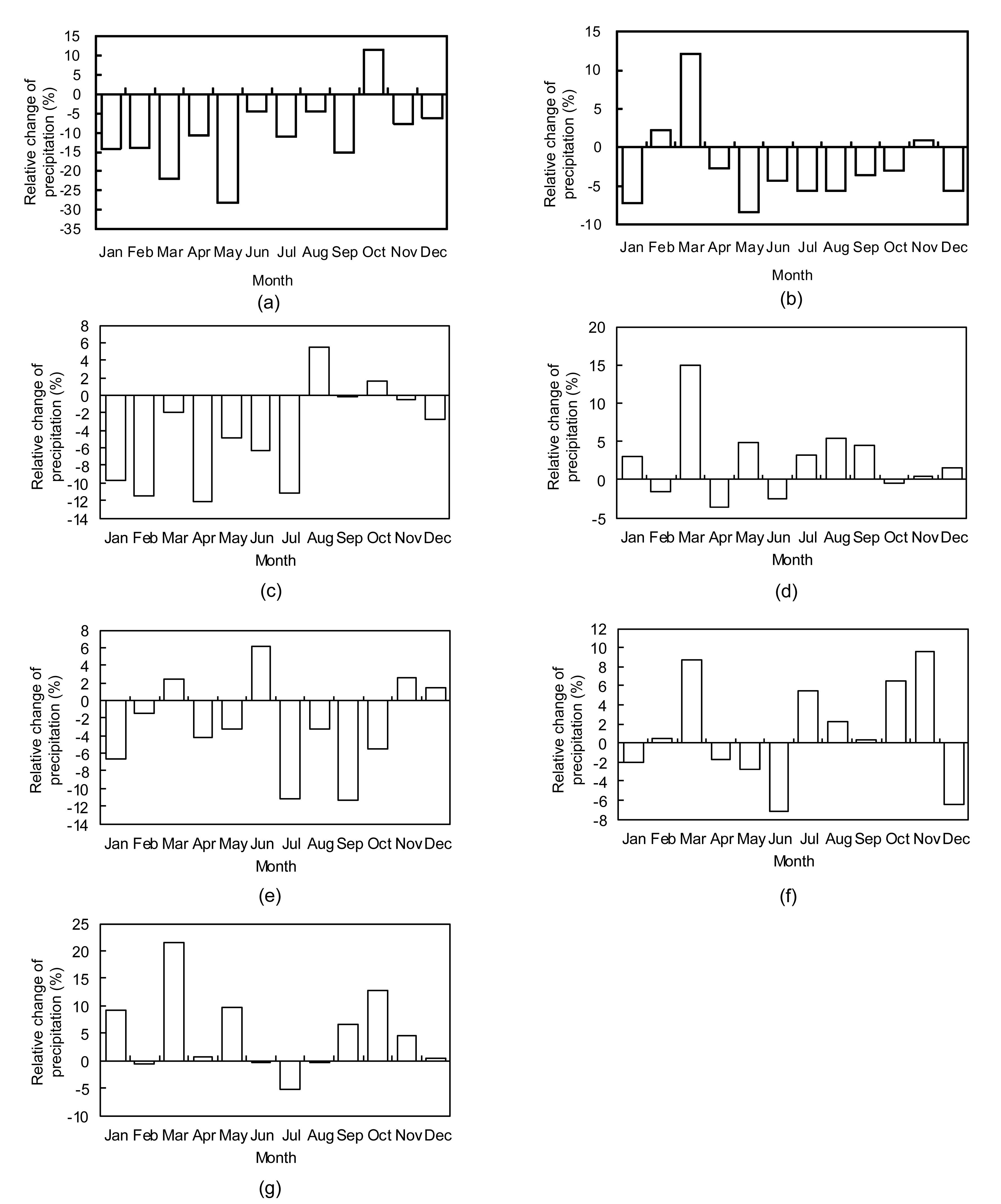 The main purpose of this paper is to evaluate the performance of a new multi-site weather generator GiST in the Qiantang River Basin, East China. Future changes in precipitation under RCP 8.5 and Hadgem2_ES for the future period 2071–2100 are also projected to illustrate the usefulness of the multi-site weather generator. The spatial structure of weather information for the given region was considered in this study. The final results indicate that the multi-site weather generator can model the spatial correlations of precipitation appropriately although slight underestimation for the daily correlations and slight overestimation for the monthly correlations can still be found. The results of this study can be used for hydrological modeling or providing implications for water resources management and extreme event risk assessment. This study also illustrates the potential of GiST applied to investigation of the impact of climate change on hydrology and water resources.

At some stations like Hangzhou, the GiST multi-site weather generator is found to underestimate the monthly precipitation amount. This is probably because the Gamma distribution adopted in the multi-site weather generator may fail to model the precipitation amount at Hanghzou. It is therefore proposed that a more reasonable probability distribution be adopted to further improve the accuracy of generated precipitation by GiST model. Moreover, the number of stations used in the orthogonal Markov chains may affect the final results although this is probably constrained by the number of parallel observations at all stations.

We also thank Dr. Guillermo A. BAIGORRIA of the University of Florida, USA for providing the GiST model and the National Climate Center of China Meteorological Administration for providing meteorological data for the Qiantang River Basin.