Diabetes mellitus (DM) has emerged as a worldwide epidemic disease with increasing prevalence, particularly in Asia. According to the epidemiological data from a national survey of Chinese people (Yang et al., 2010), the prevalence of total diabetes and pre-diabetes in China reached 9.7% and 15.5%, respectively, which indicates a public health issue and an enormous financial burden for the country. Diabetic nephropathy (DN), one of the most common microvascular complications of diabetes, is the leading cause of end-stage renal disease (ESRD) in developed countries accounting for approximately 50% of all cases of patients requiring dialysis, and is the second leading cause of ESRD in China. DN sufferers tend to be elderly and are likely to have a variety of chronic health conditions, such as cerebrovascular, cardiovascular, peripheral vascular, connective tissue, liver, chronic pulmonary diseases and tumors, which may further complicate diagnosis for the primary care clinicians and worsen clinical outcome of the patients.

Comorbidities are coexistent diseases to a disease of interest or an index disease, which may directly affect the prognosis of the disease of interest, or indirectly influence the choice of treatment (de Groot et al., 2003; Hall, 2006; Yancik et al., 2007). The Charlson comorbidity index (CCI) is the most widely used comorbidity index (Charlson et al., 1987; de Groot et al., 2003). It was developed to predict the one-year mortality among 604 patients based on comorbidity data obtained from a hospital chart review in a single US hospital (Charlson et al., 1987). It contains 19 issues including diabetes with diabetic complications, congestive heart failure, peripheral vascular disease, chronic pulmonary disease, mild and severe liver disease, hemiplegia, renal disease, leukaemia, lymphoma, metastatic tumor, and acquired immunodeficiency syndrome (AIDS), each of which was weighted according to their potential influence on mortality. Since then, CCI has been adapted and verified as applicable and valid for predicting the outcome and risk of death from many comorbid diseases (Sarfati et al., 2011; Mnatzaganian et al., 2012). However, a paucity of studies regarding the role of CCI in predicting the outcome of mortality in patients with DN has been conducted. Therefore, we investigated the validity and predictive accuracy of CCI on mortality for a hospital-based group of DN patients in China.

The group consisted of 533 patients with DN who were hospitalized from January 2003 through March 2010 in West China Hospital of Sichuan University, Chengdu, China. Inclusion criteria were patients with their first admission due to type 2 DN, who were aged 18 and above and had urinary albumin excretion of 30 mg/d and above. Patients with fever, urinary infection, and acute complications of diabetes, such as diabetic ketoacidosis, diabetic hyperosmosic coma, and malignant hypertension, were not included. The study was approved by the Ethics Committee of West China Hospital of Sichuan University, and written informed consent was obtained from each patient prior to enrollment in the study.

At admission, demographic information was recorded including age, gender, past medical history and duration of DM. Blood and laboratory data including hemoglobulin, haematocrit, serum albumin (SA), urinary protein excretion, serum creatinine, triglyceride, total cholesterol, and HbA1c were collected. The severity of comorbid diseases was recorded and scored according to CCI. Patients were divided into three groups: mild, with CCI scores of 1–2; moderate, with CCI scores of 3–4; and severe, with CCI scores ≥5. CCI was calculated according to the scoring system established by Charlson et al. (1987). Cardio-cerebrovascular disease (CVD) of the comorbidities in CCI was defined as a history of cardiac arrhythmia, peripheral vascular disease, cerebral vasculopathy, ischemic heart disease, or chronic heart failure. All patients were evaluated from January 2003 through March 2010. The mode of death was determined from clinical information leading to death. Survival time in months was calculated from the establishment of the diagnosis of DN to the death of a patient.

All values are given as mean±standard error (SE). Binary logistic regression analysis was used in the study. A one-way analysis of variance (ANOVA) was used to compare group differences stratified by CCI, and otherwise Chi-square tests were applied. Mortalities at different median evaluation follow-up time were estimated by the Kaplan-Meier curves characterized by CCI and SA. All statistical tests were two-tailed and P<0.05 was considered significant. Statistical analyses were performed using SPSS Version 13.0 software.

3.1.  Demographic and clinical characteristics of the patients at the first referral

Demographic and clinical characteristics of patients

3.3.  Associations of CCI with factors and outcomes in DN patients

To further confirm the impact of CCI as a predictive value, the DN patients were categorized into three subgroups according to their CCI scores: group 1 (CCI score 1–2), group 2 (CCI score 3–4), and group 3 (CCI score ≥5). Table 3 shows the associations of CCI with various factors and clinical outcomes in the DN patients. Compared with group 1, patients in group 3 were older and had a longer duration of diabetes, lower levels of HbA1c and SA, and higher levels of serum creatinine and mortality rate. The rates of mortality and levels of serum creatinine in groups 2 and 3 were significantly higher than those in group 1, whereas hemoglobin and SA were significantly lower. The results indicate that with the decline of the renal function, the patients of DN with higher CCI scores had higher risk of mortality.

3.4.  Effect of CCI on survival analysis 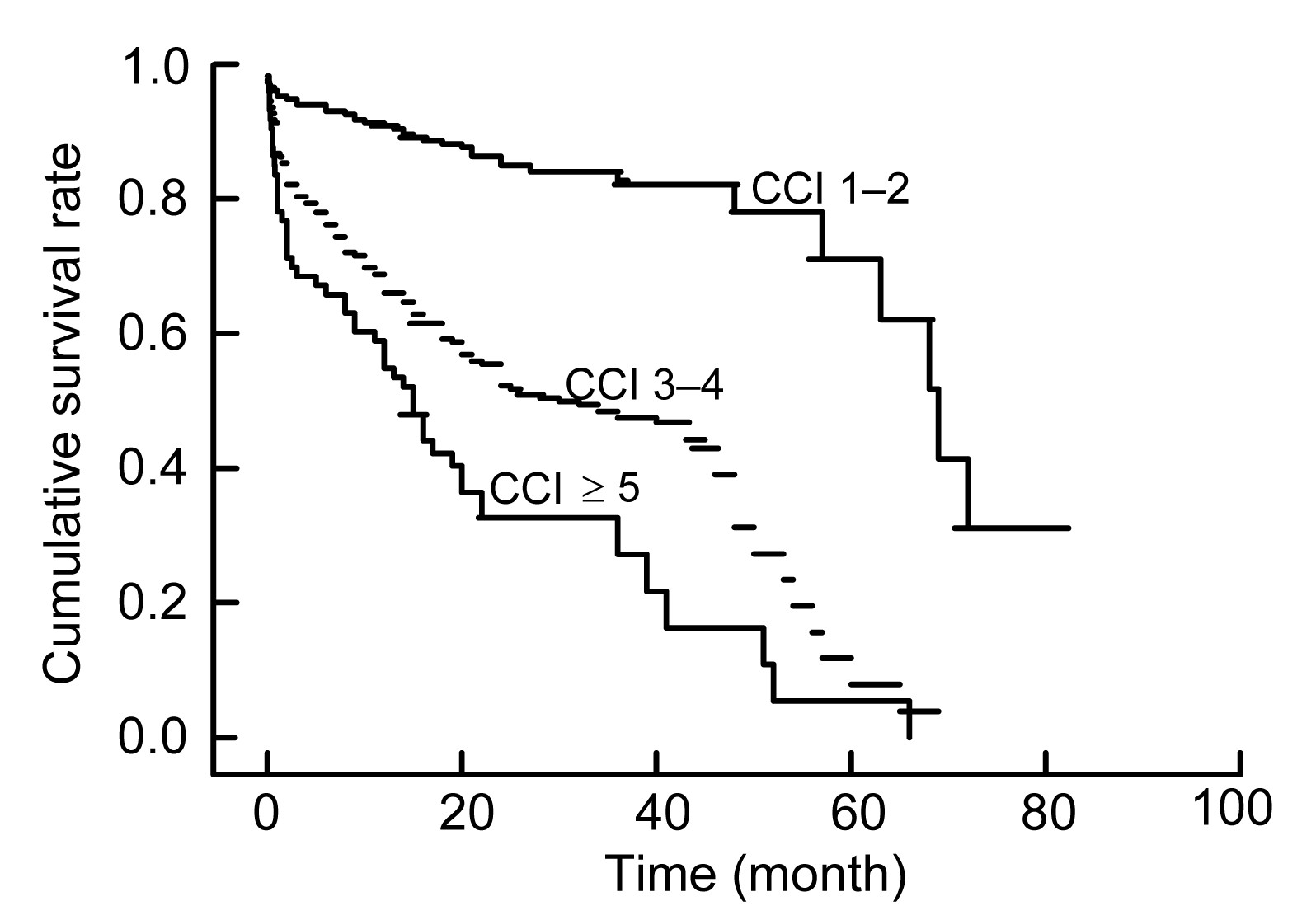 Fig.1
Kaplan-Meier plot of patients stratified by CCI scores
The months were calculated from the first time diagnosed as DN to death

Fig.2
Kaplan-Meier plots of patients stratified by CCI scores and serum albumin (SA)
(a) SA<35 g/L; (b) SA≥35 g/L. The months are calculated from the first time diagnosed as DN to death 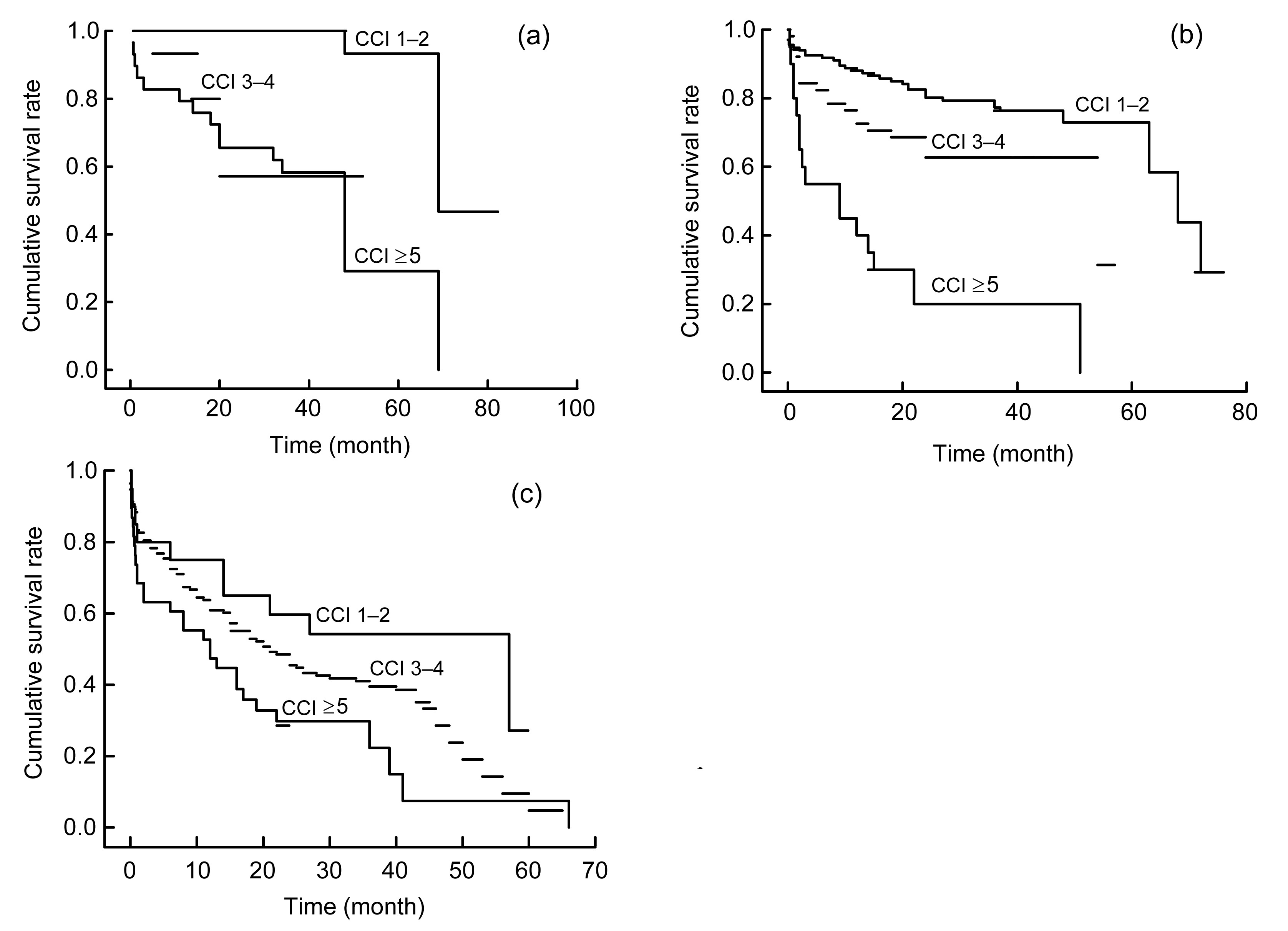 Fig.3
Kaplan-Meier plots of study patients stratified by CCI scores and Mogensen stages
(a) Stage III; (b) Stage IV; (c) Stage V. The months are calculated from the first time diagnosed as DN to death

Fig.4
Kaplan-Meier plots of study patients stratified by CCI and hemoglobin (HGB)
(a) HGB<100 g/L; (b) HGB≥100 g/L. The months are calculated from the first time diagnosed as DN to death

The increasing number of DM is the cause of the progressive increase in the number of patients with DN. Diabetes is now recognized as the most common primary comorbid condition associated with ESRD (Ritz et al., 1999; US Renal Data System, 2002). It has been discovered that those that suffer from comorbid diabetes and the associated nephropathy are more likely to die of fatal CVD than to develop ESRD (National Kidney Foundation, 2002; Debella et al., 2011). Therefore, it is an important issue to identify the possible predictors for predicting the mortality outcome of DN, so as to increase the awareness of earlier and more effective therapy to improve the outcome. Previous studies have investigated the risk factors influencing the outcome of patients with DM, chronic kidney disease (CKD), and DN (Ueda et al., 2003; McFarlane et al., 2006; So et al., 2006; McEwen et al., 2007). There are a number of risk factors associated with the development of DN, some considered “traditional” factors (e.g., old age, male sex, hypertension, diabetes, smoking, high level of low-density lipoprotein (LDL) cholesterol, physical inactivity, and a family history of CVD), and other considered “non-traditional” factors (e.g., albuminuria, anemia, abnormal calcium/phosphate metabolism, electrolytes imbalance, oxidative stress, inflammation, malnutrition, and serum creatinine) (Debella et al., 2011). However, the association of comorbidity and mortality in DN has seldom been addressed. In this paper, we performed a hospital-based study and discovered that the CCI scale helps predict the risk of mortality for patients with type 2 DN. In the present study, we found that chronic comorbidities were very common in this group of patients with DN, more than 70% of the patients had comorbidities, and hemoglobin, SA, and CCI scores were significantly correlated with the risk of death, and CCI significantly increased this risk.

Comorbidity affects prognosis, therapy, and outcome, and is associated with the decreased health outcomes. According to Feinstein (1970), comorbidity is defined as “any distinct additional entity that has existed or may occur during the clinical course of a patient who has the index disease under study”. Another definition is the co-occurrence of multiple diseases in one person (Guralnik, 1996). van den Akker et al. (1998) made a useful distinction between multi-morbidities (i.e., the co-occurrence of multiple chronic or acute diseases and medical conditions in one person) and comorbidity (Feinstein, 1970).

Cardiovascular complications are known as important factors contributing to the increased risk of death in patients with diabetes. CKD is also a powerful risk factor for CVDs. CVDs are an important component in the CCI scoring system. Notably in this study, 26.6% of all patients suffered from CVDs, and patients with higher CCI had a higher rate of CVDs. The observed prevalence of CVDs is even higher than the incidence of CV events in the HOPE study (Gerstein et al., 2005). In our group, the cause of death is mainly cardiovascular events (data not shown), including myocardial infarction, congestive heart failure, and cardiac arrests.

Another interesting finding from the current study is that 77.5% of patients were in the late stage of DN (Mogensen stage IV or V). In accordance with Lhotta et al. (2003) and Ritz (2005), our findings demonstrate that a late referral to nephrology units was associated with a higher comorbidity score, earlier death, and higher cumulative mortality rates, particularly in patients with DN. Late referral meant that patients had more frequent comorbidities, missed the chance of early reno- and cardio-protective therapy and comorbidities preventive therapy, and did not allow for adequate preparation for renal replacement therapy, which may indicate that the timing of consultation with nephrologists might also be an important determinant of outcome improvement in patients with DN.

Hypoalbuminemia and anemia have been shown to contribute to poor outcomes of patients with CKD. The RENNAL study (Keane et al., 2003) indicated that the risk of developing ESRD decreased by 30% accompanied per a 5-g/L increase of SA, and a 10-g/L fall in the mean SA level was independently associated with the recurrent cardiac failure, ischemic heart disease and cardiac mortality in ESRD patients on hemodialysis (Foley et al., 1996). Hypoalbuminemia (Ueda et al., 2003; So et al., 2006) was found to aggravate the renal function and increase the risk of CVD and directly influence the prognosis of DM. Malnutrition is considered as a strong risk factor for mortality (Suliman et al., 2000). Anemia is a common accompaniment to diabetes, particularly in those with albuminuria or reduced renal function (Thomas et al., 2003), which is also associated with an increased risk of mortality in patients with diabetes. In our group study, we found that patients with higher CCI had lower levels of hemoglobin and SA. In accordance with previous studies, our study clearly illustrated that the levels of hemoglobin and SA were also associated with increased risk of death in patients with DN, while the CCI score showed a stronger correlation with the mortality rate than SA and hemoglobin.

[6] Gerstein, H.C., Pogue, J., Mann, J.F., 2005. The relationship between dysglycaemia and cardiovascular and renal risk in diabetic and non-diabetic participants in the HOPE study: a prospective epidemiological analysis. Diabetologia, 48(9):1749-1755.