Ketoconazole (KET) is an antifungal drug commonly used for treatment of advanced prostate cancer (Rodriguez and Acosta, 1995; Kinobe et al., 2006). However, adverse effects of KET on the male reproductive system in both humans and animals have been documented. Significantly, KET was reported to decrease the weight of male reproductive organs, especially the testes, and to reduce epididymal sperm concentration and serum testosterone levels (Pon, 1987; Adams et al., 1998; Marwaha and Maheshwari, 1999; Amin, 2008). Moreover, Amin (2008) has also reported damage to rat testes induced by KET intraperitoneal (i.p.) injection (i.e., atrophy of seminiferous tubules, degeneration of Sertoli and germ cells, and sloughing of germ cells). Interestingly, such pathological changes in KET-treated rat testes could be prevented by pretreatment and co-administration with an antioxidant plant extract (Amin, 2008). Recently, there have been studies searching for non-toxic medicinal plants with antioxidant activity for use in the prevention of testicular damage. Our recent study suggested that an increase in phosphorylation levels of testicular proteins caused by administration of antioxidant plant extracts could be ascribed to testosterone production and spermatogenesis (Iamsaard et al., 2013).

Clitoria ternatea (CT) Linn. (called “Unchan” in Thailand) is a climbing vine bearing purple or white flowers. Every part of the CT vine has been systematically analyzed and revealed to have various medicinal properties (Patil and Patil, 2011). In Thailand, the purple flowers are used for many medical purposes and it is believed that they have antoxidant capacity. Mukherjee et al. (2008) reviewed the use of CT in Ayurvedic medicine and found that CT has been commonly used in anti-stress, anti-depressant, anti-microbial, and anti-inflammatory treatments. Moreover, CT has been shown to have significant hepatoprotective effects on drug-induced liver damage (Nithianantham et al., 2011). To our knowledge, the potential protective effects of CT flower extracts against KET-induced testicular damage in rats have not been reported. Therefore, the aim of this study was to evaluate the antioxidant activities and potential protective effects of aqueous CT flower extracts on KET-induced testicular damage in rats.

The fresh purple CT flowers were collected from Khon Kaen Province, Thailand, in June to July 2012. Species identification was confirmed by Prof. Pranom CHANTARANOTHAI, a plant taxonomist, from Khon Kaen University (KKU), Thailand. Voucher specimens of CT were kept in the KKU Herbarium (No. Jaturon Burawat 01 [KKU]). In the extraction process, the CT flowers were washed with distilled water and air dried for two days. The dried flowers were crushed with a hammer mill crusher (AEG IP54 Lbi 07, Germany) for 30 min. Then, the crushed sample (3 kg) was extracted with 10 L of distilled water and boiled at 95–100 °C for 30 min. The soluble extract was filtered through nylon. The filtrate was dried using lyophylization. The extraction yield of aqueous extract from CT flowers was 3.97 g.

The radical scavenging activity of the CT aqueous extract was determined using DPPH assay (Brand-Williams et al., 1995). Briefly, five concentrations of the CT flower extracts were prepared from a concentrated extract stock solution to provide a concentration plot. Each concentration of CT flower extracts (2 ml) was mixed with 2 ml DPPH in 0.004% (v/v) methanol and incubated at room temperature in dark for 30 min. The absorbance was recorded at 517 nm using an ultraviolet-visible (UV/VIS) spectrophotometer (Jasco V530, Japan). Ascorbic acid (1, 3, 5, 8, and 14 μg/ml) was used as the positive standard. All samples were measured in triplicate. The scavenging activity of the CT flower extracts or standard was calculated as the percent inhibition of DPPH radical scavenging activity using a standard formula as (absorbance of control−absorbance of sample)×100%/absorbance of control. Data were expressed as the IC50 calculated from the point of 50% inhibition against the concentration (μg/ml) plot.

Male Sprague-Dawley rats (180–200 g) were purchased from the National Laboratory Animal Center, Salaya, Nakhon Pathom, Thailand. The study was approved by the Animal Ethics Committee of KKU, based on the Ethics of Animal Experimentation of the National Research Council of Thailand (ref. No. 0514.1.12.2/93). Thirty-six rats were divided into six groups and each group (n=6) was treated as shown in Table 1.

Treatment on each group of rats

2.6.  Histopathological examination of the testes

On the day after termination of the CT-KET co-administration, all rats were euthanized by cervical dislocation and sacrificed to collect the male reproductive organs (i.e., testis, epididymis plus vas deferens, and seminal vesicle). These organs were subsequently removed of fats and weighed. To examine the testicular damage, testes were fixed in 10% (v/v) formalin in phosphate buffered saline (PBS) (pH 7.4), embedded in paraffin, sectioned at 4–6 μm thickness, and stained with hematoxylin-eosin (Iamsaard et al., 2013). All photographs were captured by a Nikon light ECLIPSE E200 microscope equipped with a DXM1200 digital camera. ImageJ was used to measure and calculate approximate average diameters of seminiferous tubules in four different axes (50 tubules per animal).

At the end of the experiment, all animals were sacrificed to expose the left ventricle of the heart. Blood was collected by puncture of the left ventricular chamber using 1 ml of heparin to prevent blood clotting. The blood was centrifuged at 5000 r/min at 4 °C for 10 min to separate the plasma serum from blood cells. The plasma testosterone concentration was assayed by enzymatic immunoassay at the Radiology Unit, Srinagarind Hospital, Faculty of Medicine, KKU, Thailand.

As described by Iamsaard et al. (2013), briefly, the left testis was homogenized with RIPA buffer (Cell Signaling Technology, Inc., USA) containing a cocktail of protease inhibitors. The testicular homogenate was then centrifuged at 12 000 r/mim for 10 min to collect testicular lysate. The total protein concentration of the lysate was measured using a NanoDrop ND-1000 Spectrophotometer (NanoDrop Technologies, Inc., USA). Total proteins (60 μg) collected from triplicate samples were separated by 10% (0.1 g/ml) sodium dodecyl sulfate polyacrylamide gel electrophoresis (SDS-PAGE) and blotted onto nitrocellulose membranes to detect the intensity of tyrosine phosphorylation using the 4G10 primary antibody (1:3000; Millipore Co., USA). For standard samples, BSA (AMRESCO®, USA) was used as the negative control and epidermal growth factors (EGFs) (Millipore Co., USA) as the positive control. In the detection of phosphotyrosine proteins, the enhanced chemiluminescence (ECL) substrate was applied before visualization under gel doct 4 (ImageQuant 400, GH Healthcare, USA). To quantify the levels of phosphorylation, the ImageJ program was used to analyze the relative intensity of phosphorylated protein bands among groups.

One-way analysis of variance (ANOVA) and t-test were used to examine the significance of differences among sets of data, and between pairs of data points using Sigma Stat program (Version 3.1.1). All quantitative results were expressed as mean±standard deviation (SD).

The effects of CT flower extracts on testicular damage were examined by observing histopathological structures (Fig. 1). The result showed shrunken seminiferous tubules in the KET group compared with the controls (Figs. 1a and 1b). This finding was corroborated by their diameters (Table 2). In the KET group, the seminiferous tubules had very minor pathological effects (in fewer than 10% of tubules) including sloughing of germ cells, early cell degeneration with giant cells, and late cell degeneration (Fig. 2). Some shrunken tubules with significantly reduced diameters (Table 2) and other abnormal seminiferous tubules could be found in the CT10+KET group (Fig. 1d). However, no histopathology or reduction in seminiferous tubule diameter was observed only in rats of the CT100, CT50+KET, and CT100+KET groups (Table 2; Figs. 1c, 1e, and 1f). 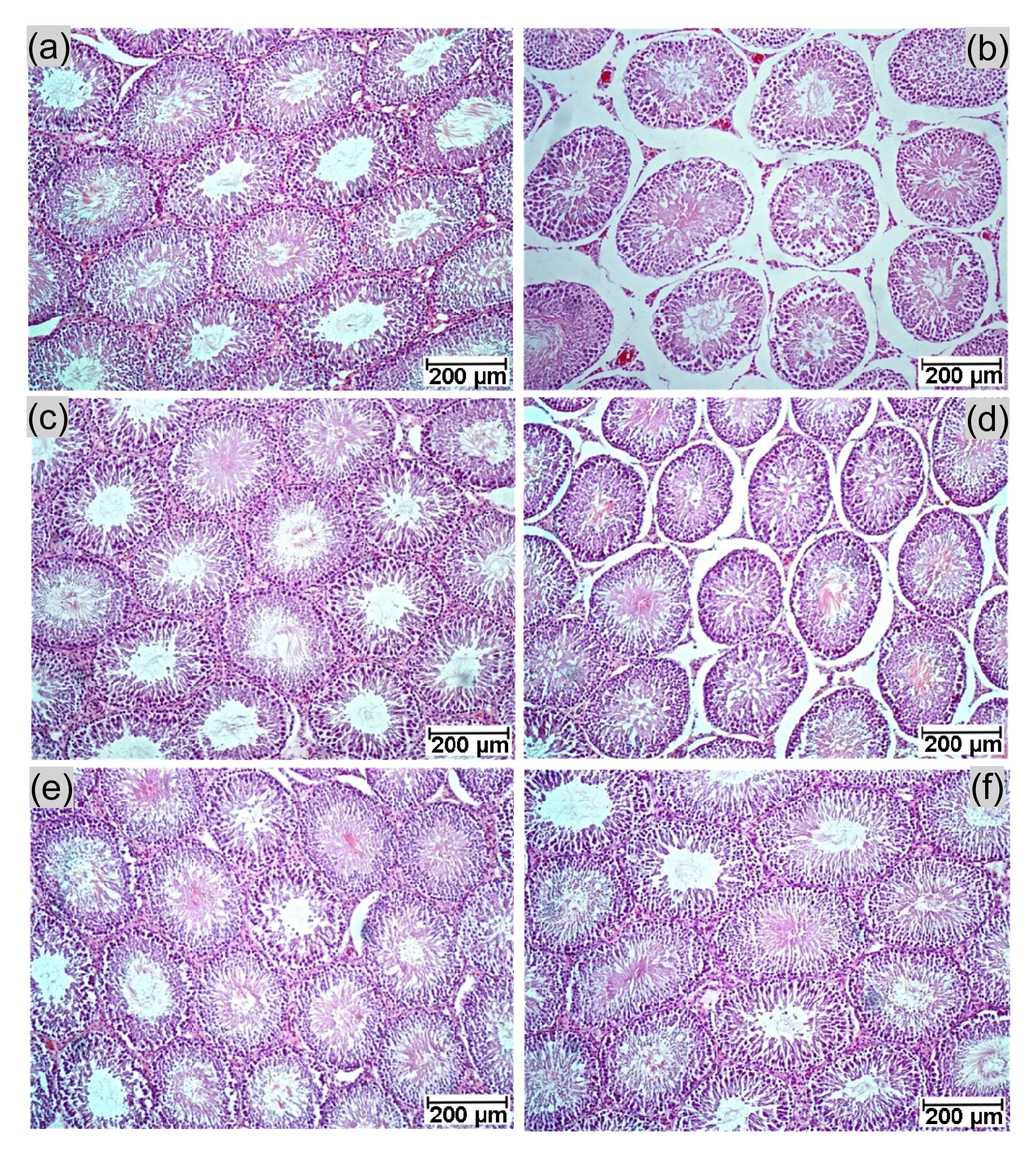 Table 2 shows that only the KET and CT10+KET groups had a significant decrease in serum testosterone levels compared with the controls. In contrast, 100 mg/kg BW CT flower extracts did not affect such levels, whereas 50 and 100 mg/kg BW CT flower extracts increased the testosterone hormone in KET-induced rats (Table 2). Similarly, not only the CT group but also the CT50+KET and CT100+KET groups showed no differences in epididymal sperm concentration compared with the controls (Table 2). 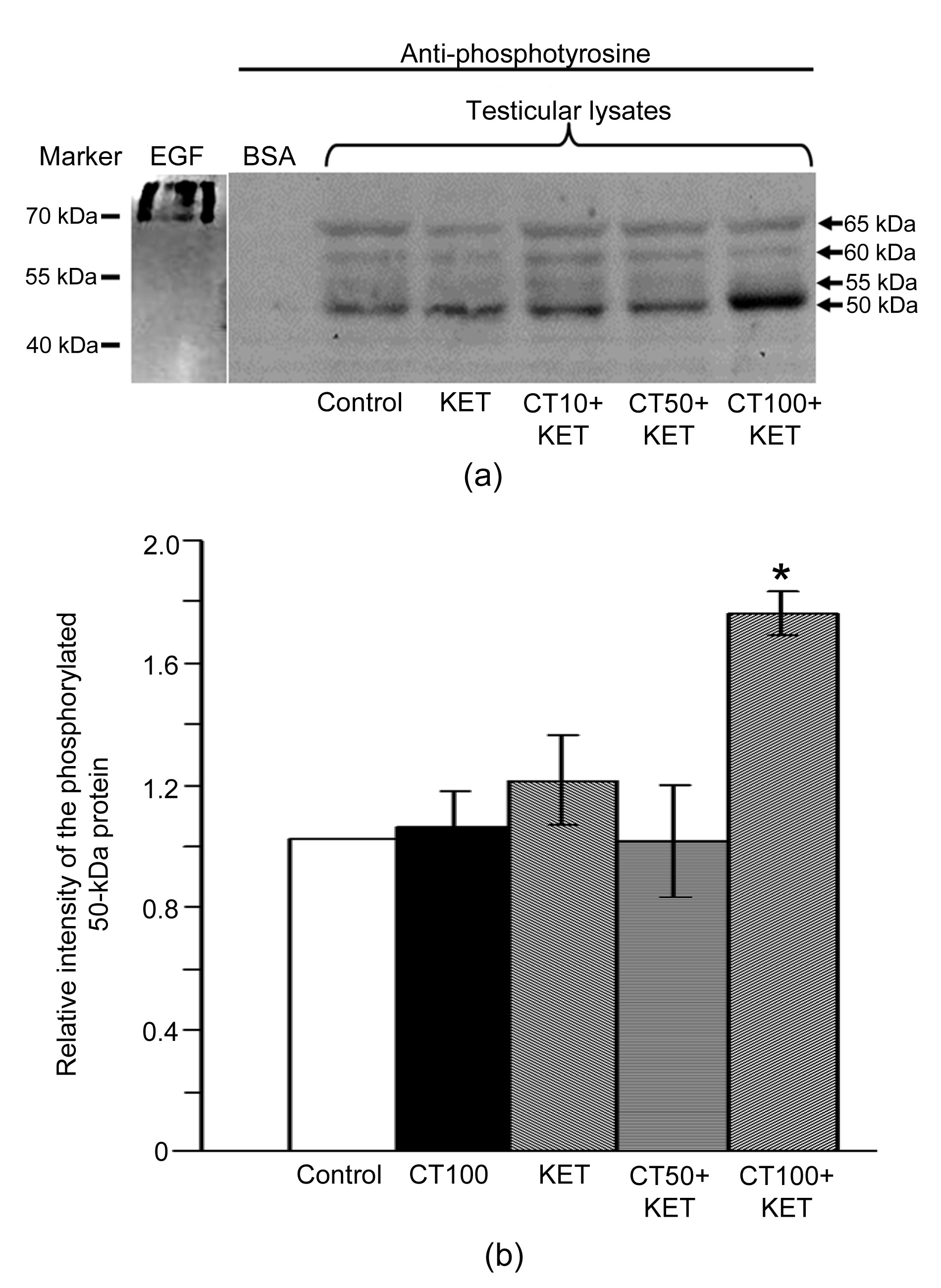 Fig.3
Immuno-Western blot analysis for tyrosine protein phosphorylation levels in testicular lysates (a) and relative intensity of the phosphorylated 50-kDa protein of testicular lysate (b)
In (a), 60 μg protein is for each lane of control, KET, and CT+KET groups. Bovine serum albumin (BSA) and epidermal growth factor (EGF)-like growth factor were used as negative and positive controls for phosphotyrosine antibody, respectively. In (b), data are expressed as mean±SD (n=3). * P<0.05 vs. control

The results in Table 2 suggest that high concentrations of CT flower extracts (100 mg/kg BW) were not harmful to male reproductive parameters. By FRAP assay, the antioxidant activity of the CT aqueous extract in this study was comparable to the ferric reducing power of ascorbic acid. In addition, a group of polyacylated anthocyanins in this blue flower is already identified and crystallized (Honda and Saito, 2002; Hiromoto et al., 2013). Consistent with previous reports (Adams et al., 1998; Amin, 2008), in the present study, KET affected reproductive organ weight, sperm concentration, and serum testosterone levels (Table 2). Moreover, CT flower extracts have been shown to exhibit high cytotoxic activity against the breast cancer cells (Akter et al., 2014). The non-toxicity of the CT flower extracts and testicular toxicity of KET induction were further confirmed by histological observations in the testis tissues (Figs. 1b and 2). However, the testicular pathology observed in Fig. 2, which was similar to that described by Amin (2008), was not quantified among groups because it was found in less than 10% of rats in the KET group and was rarely found in the low-dose group of the CT flower extracts. It seemed that testicular damage in our study was less severe than that in the previous study (Amin, 2008). This may caused by that KET in our study was prepared from a tablet, while KET (Nizoral) in Amin (2008) was from a stock solution. In CT50+KET and CT100+KET groups, the pre-treatment of CT followed by co-administration with CT and KET significantly maintained male reproductive organ weights, except for that of the seminal vesicle in the CT50+KET group (Table 2). Similarly, CT+KET rats retained normal serum testosterone levels, sperm concentration, seminiferous tubule diameters, and testicular architecture compared with the control group (Table 2; Fig. 1). These results clearly demonstrate a potential protective effect of CT flower extracts on testicular damage of rats induced by KET.

It has been shown that KET can cause hepatotoxicity and testicular toxicity which was revealed by histopathology and biochemistry results (Amin and Hamza, 2005; Amin, 2008). In rats, KET-induced testicular damage was demonstrated to be associated with alterations to testicular levels of malondialdehyde, glutathaione, catalase, and superoxide dismutase (Amin, 2008). In addition, this oxidative stress damage and antioxidant depletion in rat testis were shown to be remarkably protected by an antioxidant plant extract (Amin, 2008). Unfortunately, the extract in the present study has not shown such associations, but it was assumed to have the same action since it had high antioxidant activity. Increasingly, post-translational phosphorylated tyrosine proteins are being shown to be involved in many biological processes including sperm production, capacitation, and acrosome reaction (Morales et al., 2007; Bailey, 2010; Fardilha et al., 2011; Yamashita et al., 2011). For the first time, we attempted to explain changes in testicular tyrosine protein phosphorylation levels between control and experimental groups induced with KET (Fig. 3). However, the four major tyrosine-phosphorylated proteins present in the testicular lysate were not different from those of the control (Fig. 3), suggesting that testicular damage by KET induction was not associated with tyrosine phosphorylated proteins. In this study, the blot was cropped to demonstrate only testicular proteins against tyrosine phosphorylated antibody. Interestingly, a 50-kDa tyrosine phosphorylated protein showed high expression only in the CT100+KET group (Figs. 3a and 3b), but not in the CT100 or lower-dose CT+KET groups. In contrast, the relative intensities of the other three tyrosine phosphorylated proteins (65, 60, and 55 kDa; Table 2) were not significantly different from each other or the control (data not shown). The possible role of over-expression of a 50-kDa tyrosine phosphorylated protein in KET-induced testicular damage in rats reduced by CT flower extracts is still unclear. Similar to a previous report, this could be partially explained if this 50-kDa protein is responsible for testosterone production (Iamsaard et al., 2013).

In conclusion, CT extract has antioxidant activity, which is harmless and can reduce KET-induced testicular damage in rats.