1. EDVAM: a 3D eye-tracking dataset for....2. Relationship between malt qualities....3. Genotypic and environmental variation....4. Genetic mapping of quantitative trait....5. Theory and techniques for....6. Enhancement of the thermostability of....7. Biological activity and toxicity of....8. A food-grade industrial arming yeast....9. Interaction of salinity and cadmium....10. Effect of cadmium on growth and....

Barley (Hordeum vulgare L.) ranks fourth among the cereal crops in terms of planted area and production in the world (Zhou, 2010). It is characterized by multiple uses, but is used mainly for malting and animal feed. The rapid increase in beer and whisky consumption worldwide requires more malt barley grains with high quality. It has been well documented that diastatic power (DP), malt extract, and fermentability are major attributes determining malt quality (Ullrich et al., 1997; Agu et al., 2007). DP represents a hydrolytic ability of malt, degrading starch into fermentable oligosaccharides and maltose, and is significantly related to malt extract and fermentability, which in turn determine alcoholic output from barley grains or malt (Agu, 2003; Agu et al., 2007). The starch-degrading process involves the coordination of at least four enzymes, namely α-amylase, β-amylase (EC 3.2.1.2; 1,4-α-glucan maltohydrolase), limit dextrinase, and α-glucosidase. Among them, β-amylase, which catalyzes the 1,4-α-glycosidic linkages in the none-reducing end of the poly-glucan chain to release β-maltose, plays a key role during degradation of starch, and its activity is significantly correlated with DP (Delcour and Verschaeve, 1987; Gibson et al., 1995). Unlike the other three enzymes, which are synthesized during germination, β-amylase accumulates during seed development, and exists in seeds in free and bound forms (Hara-Nishimura et al., 1986; Hardie, 1975; Vinje et al., 2011). Therefore, the content or activity of β-amylase in barley grains will be greatly affected by environmental factors. In addition, β-amylase thermostability (BAT) has a huge effect on wort fermentability (Evans et al., 2003). During brewing, starch saccharification or diastatic action is conducted at a constant temperature of 65 °C or a variable temperature from 48 to 70 °C, to enhance the degradation of starch rapidly and thoroughly (Eglinton et al., 1998). However, β-amylase shows lower thermostability than α-amylase and limit dextrinase, and its activity decreases rapidly if the incubation temperature is over 55 °C (Thacker et al., 1992; Sjöholm et al., 1995). Therefore, BAT is also an important trait associated with malt quality.

Eglinton et al. (1998) identified four kinds of β-amylases, after making an intensive survey of natural variation in the enzyme thermostability in barley. Three alleles controlling β-amylase, Bmy1-Sd1, Bmy1-Sd2L, and Bmy1-Sd2H, were detected in cultivated barley, while Bmy1-Sd3, controlling the β-amylase with high BAT, was found in wild barley (Hordeum vulgare L. ssp. spontaneum). These four β-amylases differ in irreversible heat inactivation, which is in turn related to original activation. The barley cultivars with the Bmyl-Sd1 allele showed moderate BAT, while the cultivars with Bmyl-Sd2 could be divided into two groups: high (Sd2H) and low (Sd2L) BAT. The wild barley with Bmyl-Sd3 had the highest BAT.

Accordingly, it has been an important objective in malt barley breeding to develop cultivars with high β-amylase activity (BAA) and BAT. The success of such a breeding program is greatly dependent on the availability of genetic diversity. Ahokas and Manninen (2000) reported that Finnish landrace barleys had a higher thermostability than cultivated barleys. Kaneko et al. (2001a) examined 6752 barley accessions from different areas of the world, and found that barley germplasm from China had a large variation in BAT. Recently, Gong et al. (2013) also reported that Chinese landrace and Tibetan wild barleys showed high BAA and were rich in β-amylase alleles. Tibetan annual wild barley is well-known for its wide genetic diversity (Dai et al., 2012). Thus, it may be possible for us to identify accessions with high BAA and BAT from Tibetan wild barley.

Barley grains were milled with a Cyclotec 1093 sample mill (Tecator AB, Höganäs, Sweden) and passed through a 0.5-mm screen. Then, 0.5 g powder of each sample was used for BAA assay. BAA was determined with the BETAMYL-3® kit (Megazyme International Ireland Ltd.) according to McCleary and Codd (1989) with slight modification. Three replicates were used for each measurement. For easy comparison, the unit of BAA was converted from BETAMYL-3® to BETAMYL®. One BETAMYL® unit is the amount of enzyme required to release 1 μmol of p-nitrophenol from p-nitrophenyl-α-D-maltopentaose per minute.

BAT was determined by a two-point assay method according to Eglinton et al. (1998). The BAT is expressed as the relative residual BAA (RRBAA), i.e., the amount of residual BAA after incubating the β-amylase extract in a 60 °C water bath for 10 min, expressed as a percentage of the initial BAA in the grains.

2.4.  Change in RRBAA with temperature

According to the results of above-mentioned two-point assay, Tibetan wild barley accessions, XZ174 and XZ7, and the cultivar Allaweinuw showed high, low, and moderate BATs, respectively. Hence, these three genotypes were used to study the change in BAT under a temperature change from 40 to 70 °C. 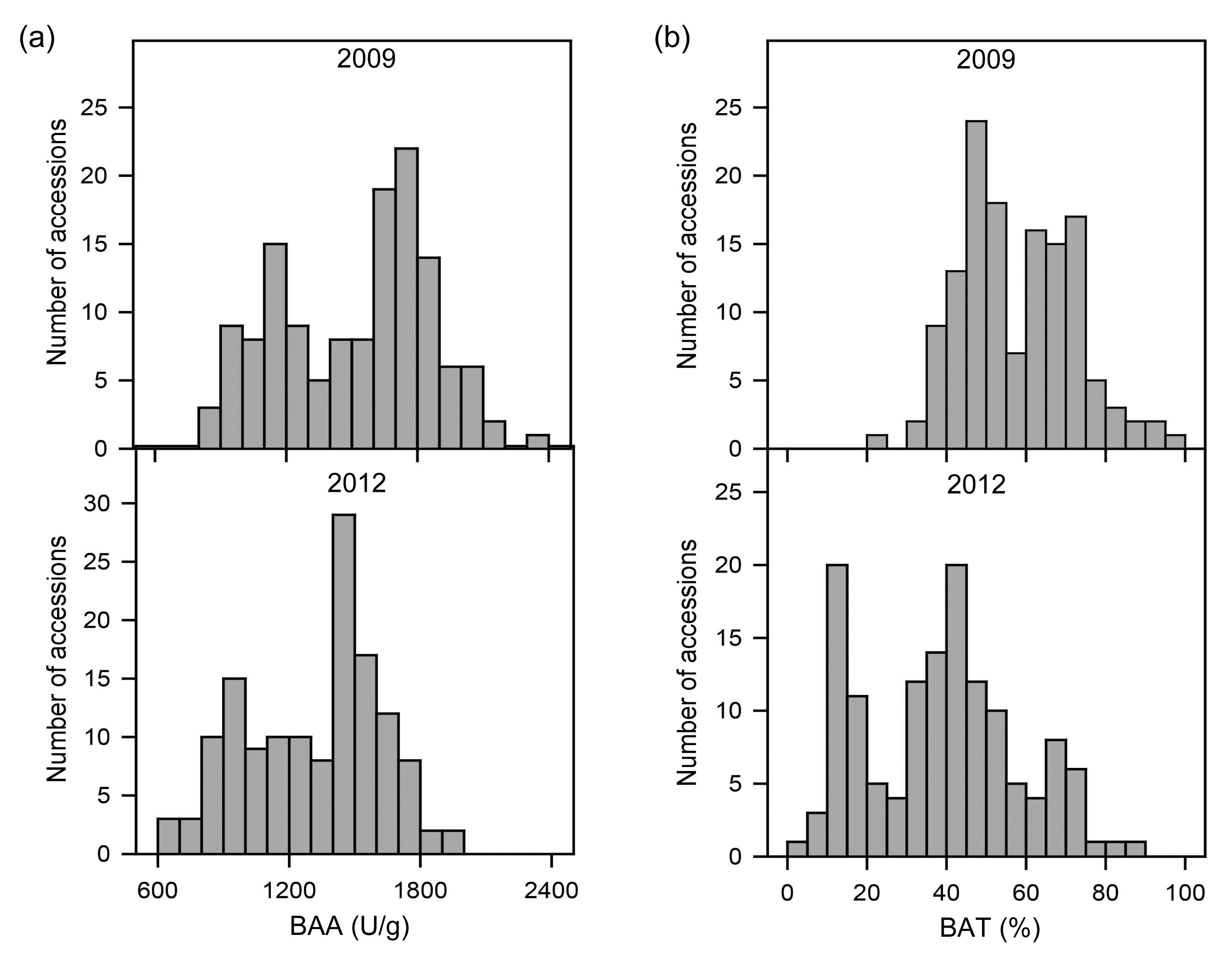 Fig.1
Frequencies of BAA (a) and BAT (b) in 138 Tibetan wild barley accessions in 2009 and 2012
Top and bottom panels represent the results by using seeds harvested in 2009 and 2012, respectively. Each value is the mean of three replicates for each genotype

3.3.  Change in RRBAA with temperature

The three barley genotypes examined differed dramatically in the response of BAA to changing temperature (Fig. 3). From 40 to 55 °C, all three genotypes exhibited relatively high BAA, and from 65 to 70 °C, their BAA declined to almost zero. XZ174 showed higher stability in BAA than the other two genotypes at increased temperatures, and its RRBAA remained as high as 85.9% in 2009 and 73.8% in 2012, even when exposed to 60 °C. However, a rapid decline in enzyme activity was observed when the temperature rose to 65 °C. XZ7 showed the lowest stability of BAA among the three barley genotypes in terms of response to increased temperature. Its RRBAA was higher than that of the other two genotypes when the temperature was below 45 °C in 2009, but declined rapidly with increasing temperature in both 2009 and 2012. Between 55 and 65 °C, XZ7 showed the lowest BAT. The cultivated barley Allaweinuw had a moderate BAT in response to temperature change in both 2009 and 2012. 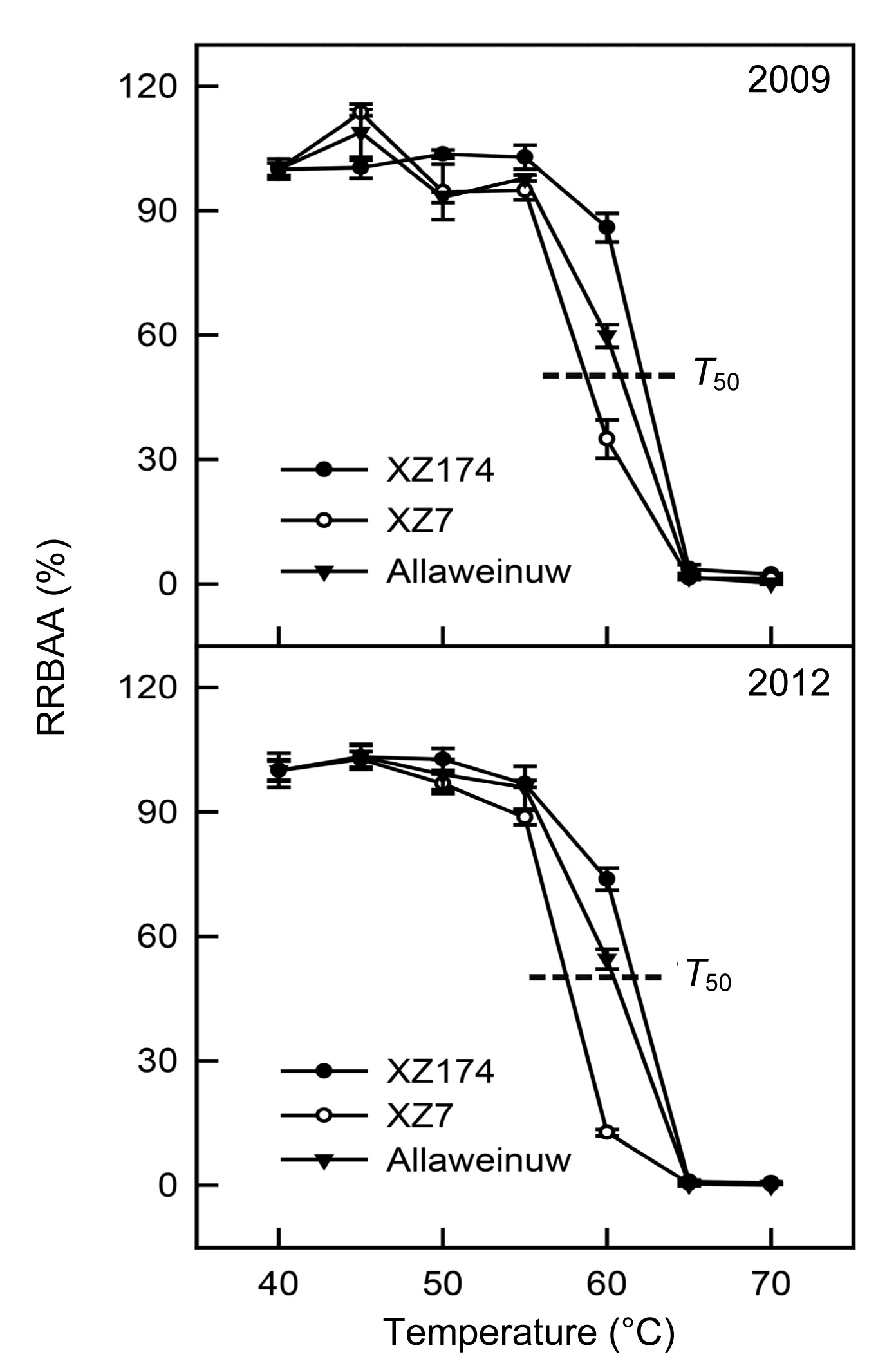 3.4.  Change in RRBAA with duration of heat treatment 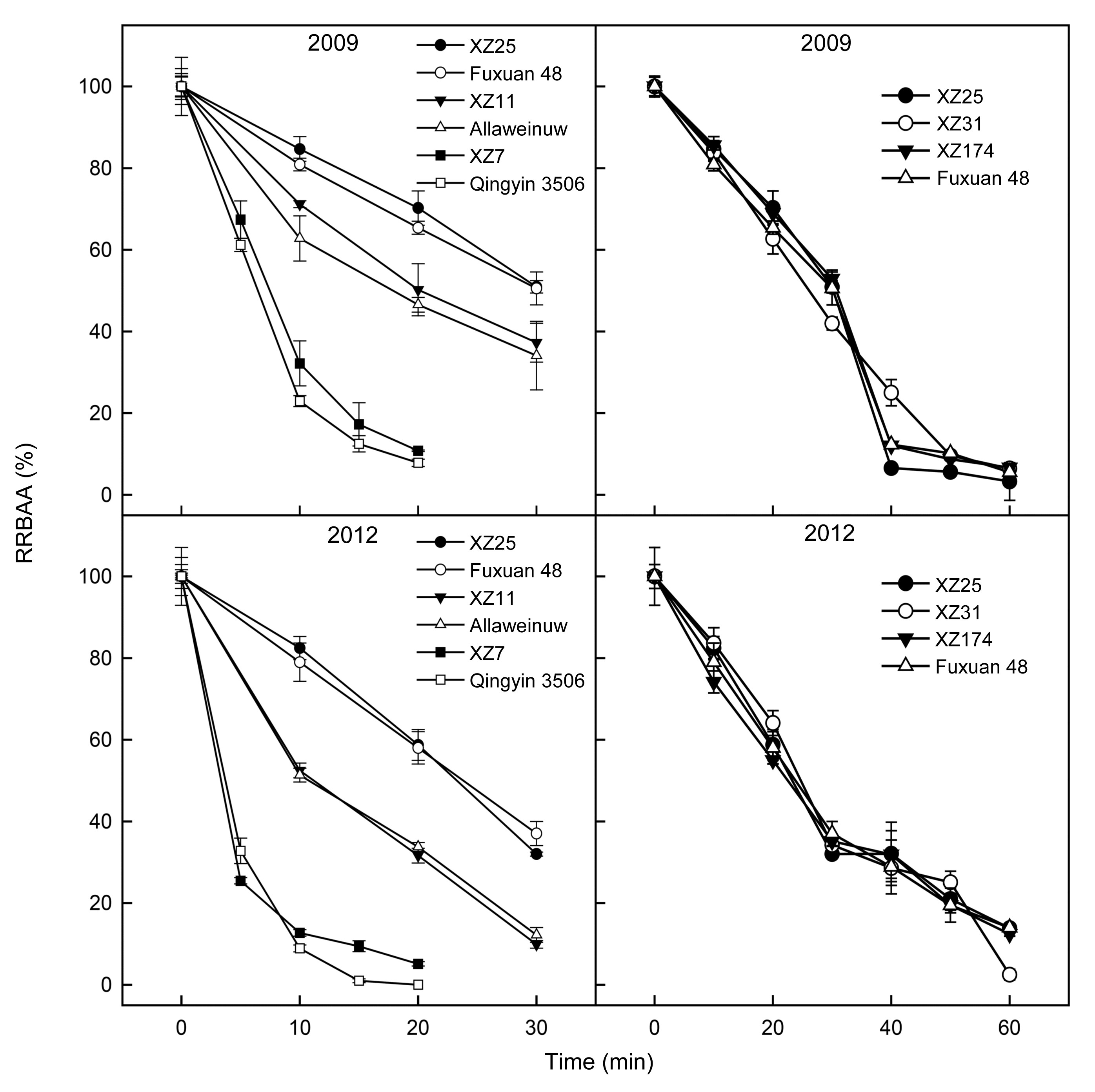 Fig.4
Change in RRBAA with duration of heat treatment
β-Amylase extract of each genotype was incubated at 60 °C for 30 min (left panels) or 60 min (right panels). The germplasm coded XZ is Tibetan wild barley. Each value is the mean of three replicates for each genotype. Bars represent standard errors
To identify elite genotypes or accessions with high BAA and BAT, three wild barley accessions, i.e., XZ25, XZ31, and XZ174, with BAA over 1500 U/g, and cultivar Fuxuan 48, with BAA over 1100 U/g in 2009, were selected to confirm their BAT within 1 h of treatment at 60 °C (Fig. 4). The changes in RRBAA values in response to heat treatment for the four genotypes were very similar in the two years, except for XZ31, which showed a slight difference between 2009 and 2012.

The two-point assay method was used by Eglinton et al. (1998) to determine BAT. In the current study, this method was employed to measure the BAT of 138 Tibetan wild barley accessions and 20 cultivated barley cultivars (Table 1). Eight genotypes with a large difference in BAT were further used to investigate the responses of BAT to the temperature and duration of heat treatment (Figs. 3 and 4). The RRBAA value, an indicator of BAT, differed among the genotypes examined, and some wild barley accessions, including XZ174, XZ31, and XZ25, showed high BAT. Our results showed that the two-point assay is efficient for the determination of BAT in a large population.

Wei et al. (2009a) reported the BAA of 76 Tibetan wild barley accessions planted in two locations, Hangzhou and Wuhan, China in the 2006 and 2007 growing seasons, and found a large difference among these wild accessions. In the present study, we found a wider variation in BAA among wild barleys than among cultivated barleys. Moreover, there was an obvious difference between the two years, although there was a significant correlation between the years. Similarly, we found a large difference in BAT among barley genotypes and between years, and the wild barley accessions showed a wider variation than cultivated barley. A significant correlation between the two years in BAT was also found. So we conclude that BAT, like BAA, is affected by both genetic and environmental factors. Concerning the weather during the grain filling stage, 2012 had lower temperatures and more rainfall than 2009. In a previous study, we found that high temperatures during the filling stage could cause higher BAA (Wei et al., 2009b). The current results suggest that BAT varies in relation to temperature and rainfall.

Tibetan wild barley is considered as one of the progenitors of cultivated barley (H. vulgare) and is rich in genetic diversity (Dai et al., 2012). Recently, it was shown that wild barley contained special germplasm with high tolerance to abiotic stresses, such as salinity and drought (Zhao et al., 2010; Qiu et al., 2011; Wu et al., 2011). The current study showed that Tibetan wild barleys have wide genetic variation in BAA and BAT. For malting or brewing use, both the BAA and BAT of barley grains are important for the starch-degrading process (Eglinton et al., 1998; Wang et al., 2003). BAA and BAT are controlled by quantitative loci, including the Bmy1 allele, which is located in the long arm of chromosome 4H (Erkkilä et al., 1998; Kaneko et al., 2001b; Clancy et al., 2003). In this study, the BAAs and BATs of Tibetan wild and cultivated barleys were compared. As a result, some wild accessions were identified which have higher BAA and BAT than those reported previously (Eglinton et al., 1998; Filichkin et al., 2010; Vinje et al., 2010). These genotypes will be useful for the improvement of malt quality through breeding programs.

Tibetan wild barleys showed wider distributions of BAA and BAT than cultivated barleys in the two years of experiments. Both BAA and BAT were greatly affected by the genotype and the environment. There was a significant difference among barley genotypes in the response of RRBAA to the temperature and duration of heat treatment. These findings will be helpful for the improvement of BAA and BAT in malt barley.


*&nbspProject supported by the National Natural Science Foundation of China (Nos. 31330055 and 31201205), the Zhejiang Provincial Natural Science Foundation of China (No. Z3110054), the 948 Project of Ministry of Agriculture of China (No. 2012-Z25), and the China Agriculture Research System (No. CARS-05)Compliance with ethics guidelines&nbspHai-tao ZHANG, Tian-long CHEN, Bing-lin ZHANG, De-zhi WU, Ye-chang HUANG, Fei-bo WU, and Guo-ping ZHANG declare that they have no conflict of interest.