Abstract: This paper presents the development of a proportional-integral-derivative (PID)-based control method for application to active vehicle suspension systems (AVSS). This method uses an inner PID hydraulic actuator force control loop, in combination with an outer PID suspension travel control loop, to control a nonlinear half-car AVSS. Robustness to model uncertainty in the form of variation in suspension damping is tested, comparing performance of the AVSS with a passive vehicle suspension system (PVSS), with similar model parameters. Spectral analysis of suspension system model output data, obtained by performing a road input disturbance frequency sweep, provides frequency response plots for both nonlinear vehicle suspension systems and time domain vehicle responses to a sinusoidal road input disturbance on a smooth road. The results show the greater robustness of the AVSS over the PVSS to parametric uncertainty in the frequency and time domains.

The design of vehicle suspension systems (VSS) is concerned with finding a satisfactory trade-off between the conflicting criteria of vehicle ride comfort, quality of vehicle handling and road holding, within the limits of suspension travel (Hrovat, 1997; Pedro and Dahunsi, 2011). Research investigating the ability of passive vehicle suspension systems (PVSS), semi-active vehicle suspension systems (SAVSS), and AVSS to meet this demand has been very active since the 1950s (Guglielmino and Edge, 2004; Gao et al., 2006). This has been driven by the development of optimal control methods, improvements in computer processing capabilities, and increasing affordability of sensors and actuators (Hrovat, 1997; Guglielmino and Edge, 2004). Unlike PVSS and SAVSS, which have the ability only to dissipate force, AVSS are capable of introducing forces into the VSS. This positions AVSS better to address the trade-off, but at a higher cost in terms of energy and complexity (Williams, 1997; Fischer and Isermann, 2004). In addition, the best compromise must be achieved in the presence of the system’s nonlinearities and uncertainties (Pedro and Dahunsi, 2011).

Simplicity and relative ease of tuning for adjustment of system control parameters (e.g., rise time, settling time, and overshoot), have led to extensive application of PID control in industry (Astrom and Hagglund, 2001; O′Dwyer, 2006; Cetin and Akkaya, 2010). Several authors within the field of AVSS research have applied PID control to quarter-car, half-car, and full-car AVSS (Kumar, 2008; Ekoru et al., 2011; Guclu, 2003). Furthermore, PID-based AVSS designs are used to set performance standards for other control methods such as NN-based control (Renn and Wu, 2007; Eski and Yildirim, 2009; Dahunsi and Pedro, 2010).

A lack of robustness in response to parameter variations and the requirement of high loop gains have motivated research on enhancing PID controller performance. Feng et al. (2003) demonstrated the use of a genetic algorithm (GA) to tune a combined PID/FLC for a half-car AVSS. Ji and Li (2009) employed FLC to adjust PID controller gains for an AVSS with hydraulic actuator dynamics. Dahunsi et al. (2010) and Zhao et al. (2011) overlaid PID controllers with a multi-layer perceptron (MLP) and radial basis function (RBF) NN controllers in feedforward, respectively, to quarter-car AVSS with servo-hydraulic actuator dynamics.

Past AVSS research was limited in terms of the amount of experimental validation. This is because the main focus was on calculation of the required control force, excluding the dynamics of the force generating actuators (Chantranuwathana and Peng, 2004; Sam and Hudha, 2006). Although many other types of actuators have been proposed in the literature, hydraulic actuators are the most common in AVSS owing to their rapid response time, high stiffness, superior power-to-weight ratio, low cost, and low heat dissipation during periods of sustained force generation (Dahunsi et al., 2009; Pedro and Dahunsi, 2011).

This paper proposes PID control of a nonlinear half-car AVSS with hydraulic actuator dynamics. The control method consists of two control loops: an inner loop for PID hydraulic actuator force feedback control and an outer loop for suspension travel feedback control. Suspension travel is measured readily with devices like linear variable differential transformers (LVDT), prompting its selection as a controlled output variable in this work. This can also prevent suspension travel topping and bottoming (Du and Zhang, 2009b).

We also aimed to investigate the robustness of VSS in response to uncertainty in suspension damping. The performance of the developed PID-controlled nonlinear half-car AVSS with hydraulic actuator dynamics was compared with that of a nonlinear half-car PVSS with similar model parameters. Analysis was carried out in the frequency and time domains.

Fig.1
Schematic of a half-car active vehicle suspension systems (AVSS) model for observing vehicle pitching motion
Application of Newton’s second law of motion to the nonlinear half-car AVSS gives the governing equations of motion in state-space form as (Szaszi et al., 2002; Huang et al., 2010) where x is the state vector, u is the control input vector, w is the disturbance input vector, f ( x ) is the system vector, g ( x ) is the control input matrix, and p is the disturbance input matrix.

The output equation is given as 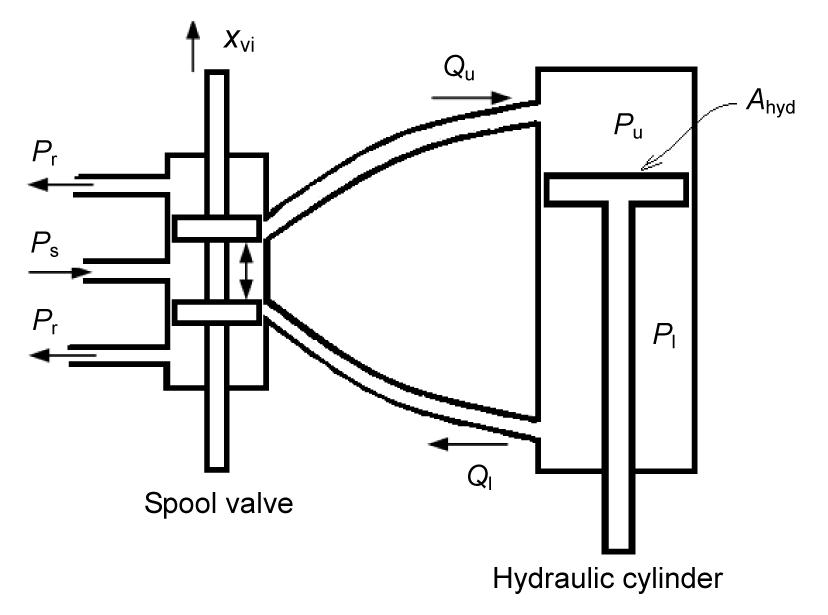 Fig.2
Diagram of a double-acting hydraulic actuator
The control input matrix, g ( x ), is given as

The disturbance input matrix, p , is given as 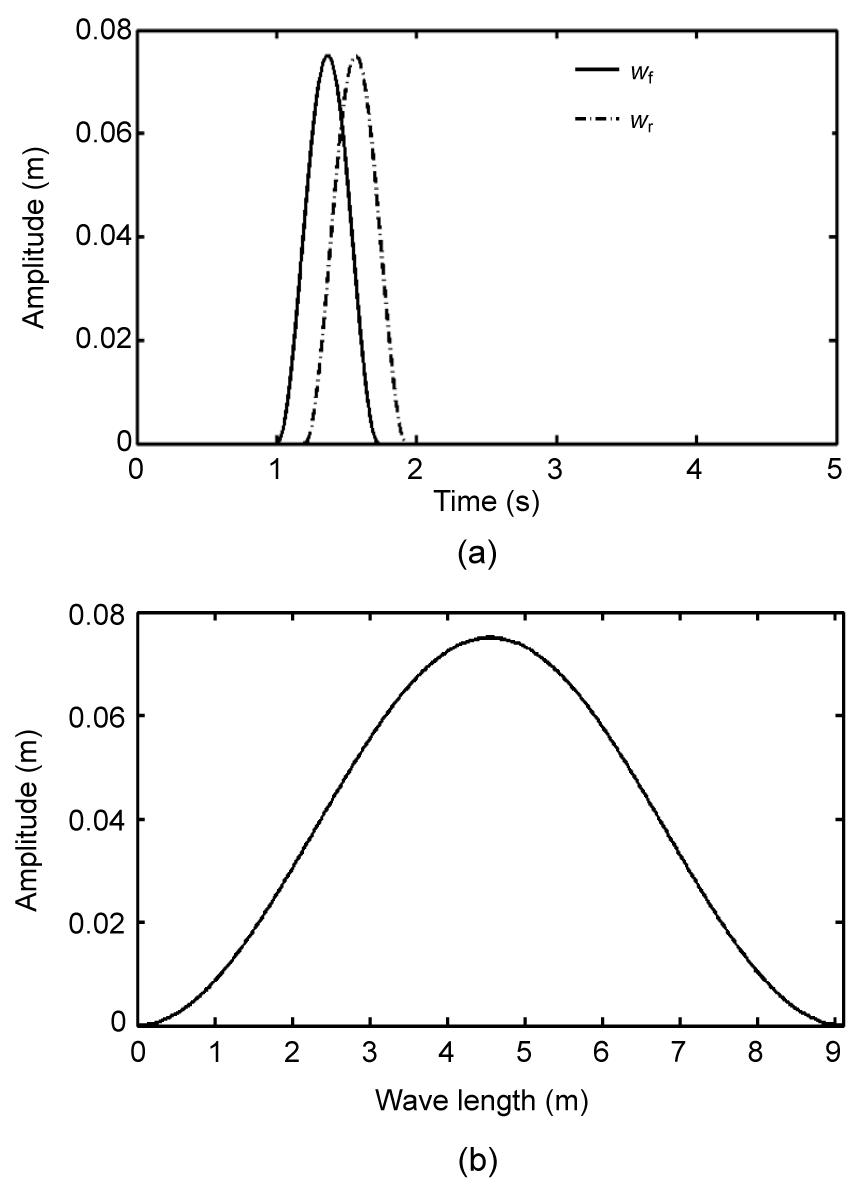 The performance specifications used in this work are: 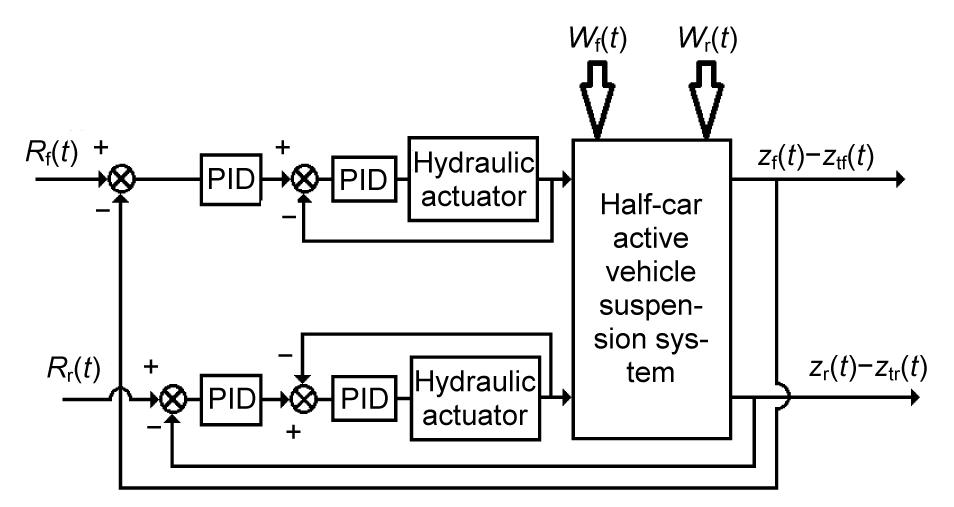 The PID force control loop is shown in Fig. 5 in which ui is the hydraulic actuator control voltage.

The half-car AVSS and PVSS models were built in the MATLAB/Simulink environment. The ordinary differential equation (ODE)-3 (Bogacki-Shampine) fixed step solver was selected for the simulations. To enable observation of all model dynamics, the sampling time was set to T s=0.0001 s, smaller in magnitude than the fastest half-car AVSS model dynamics (Dahunsi and Pedro, 2010). Since the AVSS and PVSS models do not have multiple sampling times, the tasking mode for periodic sampling times was set to “Single Tasking”.

A chirp road input disturbance signal of amplitude ±15 mm (Sammier et al., 2003) with frequency increasing from 0–100 Hz (over a simulation period of 100 s), was applied to perform a frequency sweep on the AVSS and PVSS (Savaresi et al., 2010). Spectral analysis was performed on the AVSS and PVSS model outputs with the MATLAB Welch algorithm/spectral estimator. Optimal frequency response plots were obtained by using the “Hamming” window setting, a segment length of N/100 (where N is the total number of samples) and a percentage overlap of 214 (The MathWorks, Inc., 2001).

5.1.  Variation of suspension damping coefficients in the frequency domain

Figs. 6–11 show the AVSS and PVSS front suspension travel, rear suspension travel, front dynamic tyre force, rear dynamic tyre force, sprung mass acceleration, and pitch angular acceleration power spectral density (PSD) plots, respectively, for Δ=±30% variation in , , and about their nominal values. The AVSS response was more robust to variation in suspension damping coefficients in the region below 4 Hz and the region around the wheel-hop frequency (≈12 Hz), than that of the PVSS. The PVSS peak at the wheel-hop frequency was higher than that of the AVSS. Between 4–8 Hz and above 20 Hz, both the AVSS and PVSS produced similar performance. 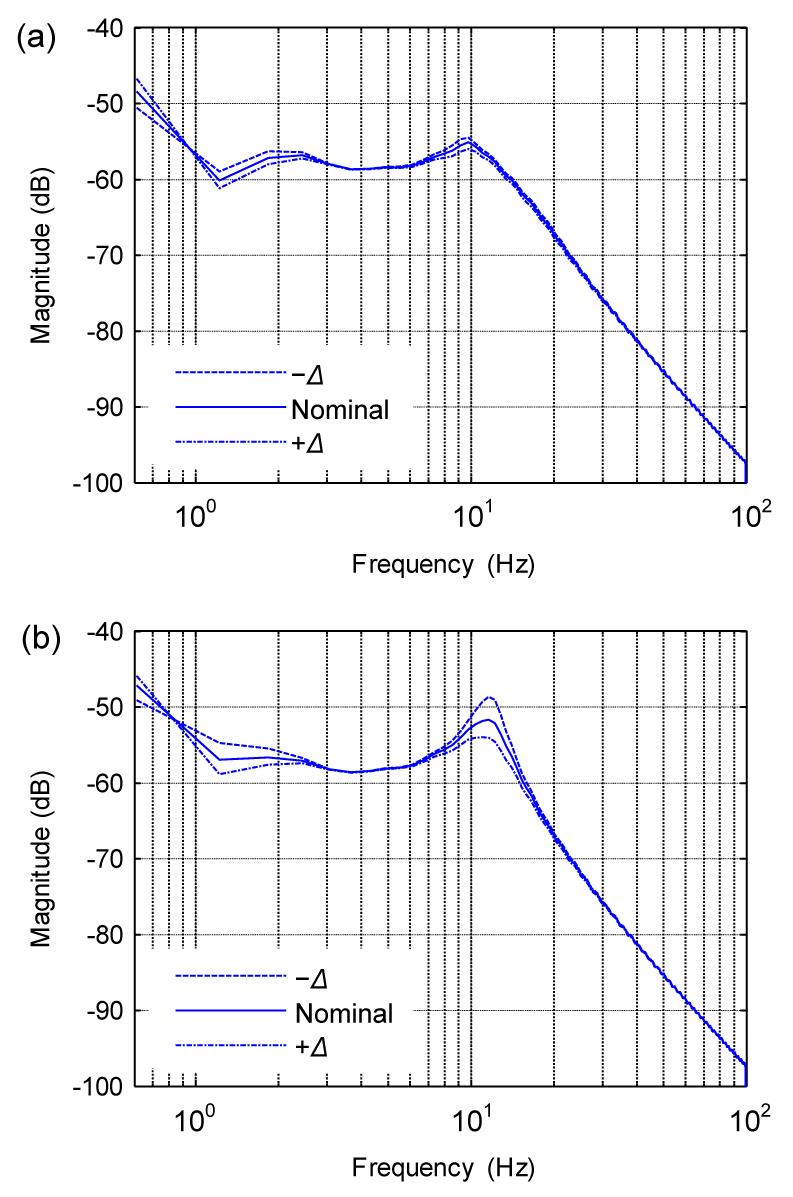 Fig.6
Front suspension travel PSD for AVSS (a) and PVSS (b) 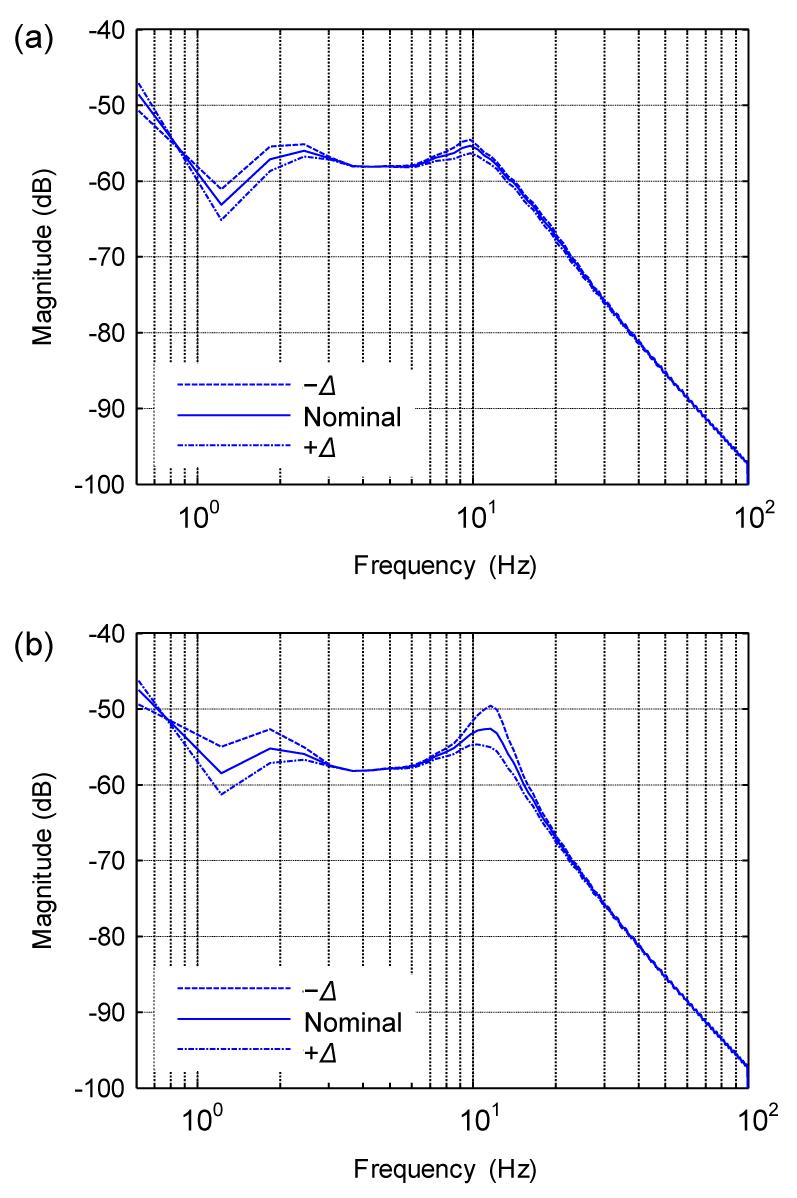 Fig.7
Rear suspension travel PSD for AVSS (a) and PVSS (b) 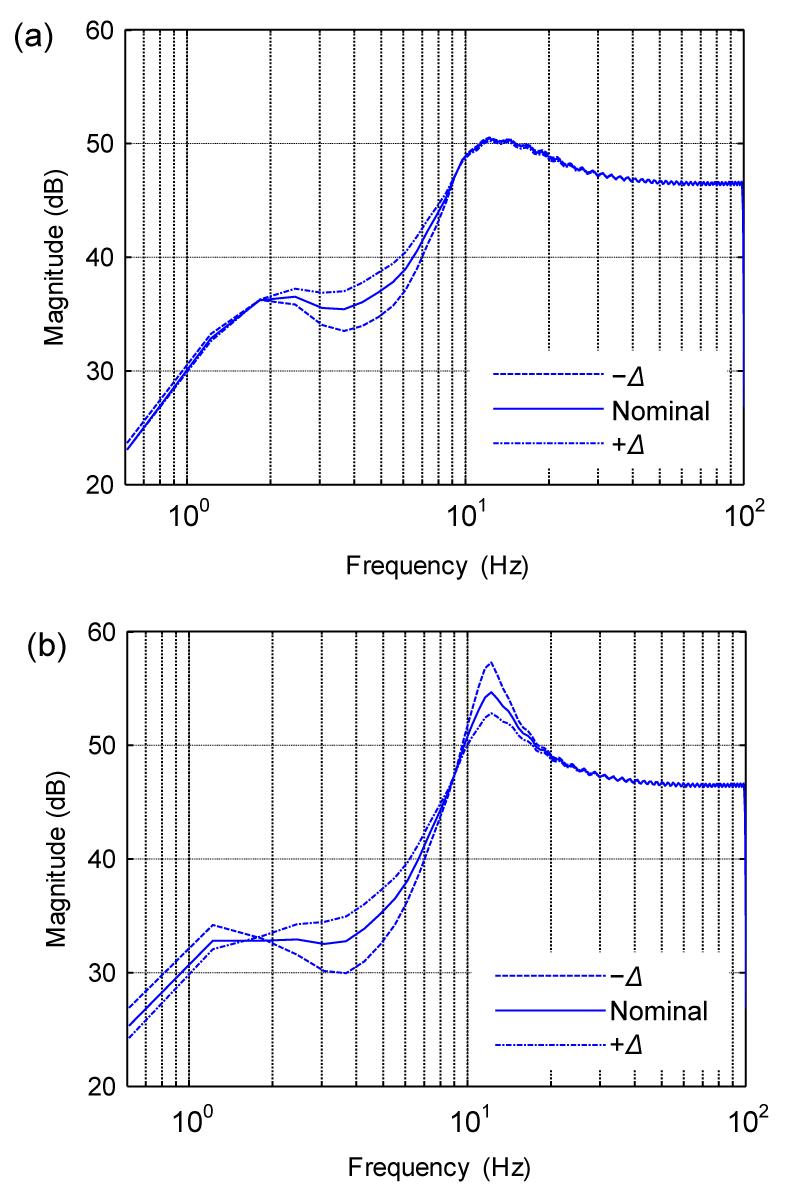 Fig.8
Front dynamic tyre force PSD for AVSS (a) and PVSS (b) Fig.9
Rear dynamic tyre force PSD for AVSS (a) and PVSS (b) 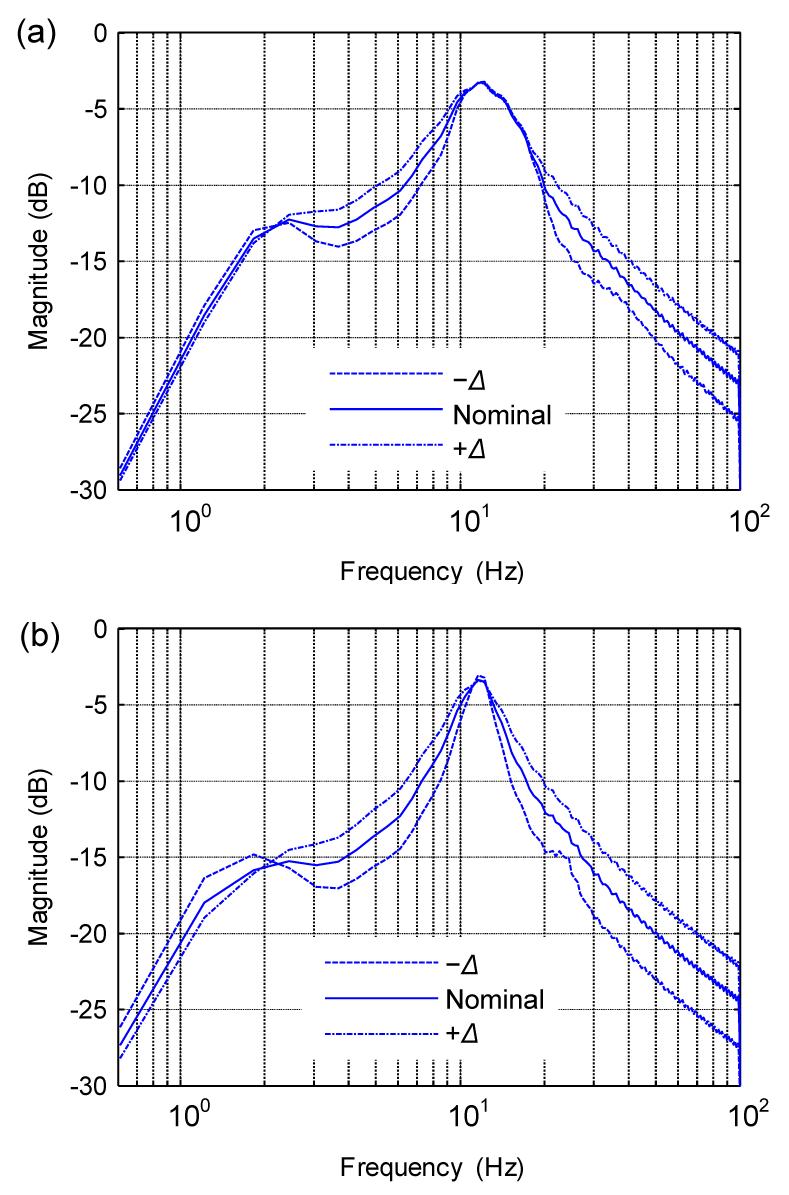 Fig.10
Sprung mass acceleration PSD for AVSS (a) and PVSS (b) Fig.11
Pitch angular acceleration PSD for AVSS (a) and PVSS (b)

Table 4 (p.410) shows the RMS values obtained as the AVSS and PVSS traversed the sinusoidal bump road input disturbance given in Section 2.2 for Δ=±30% variation in , , and about their nominal values. 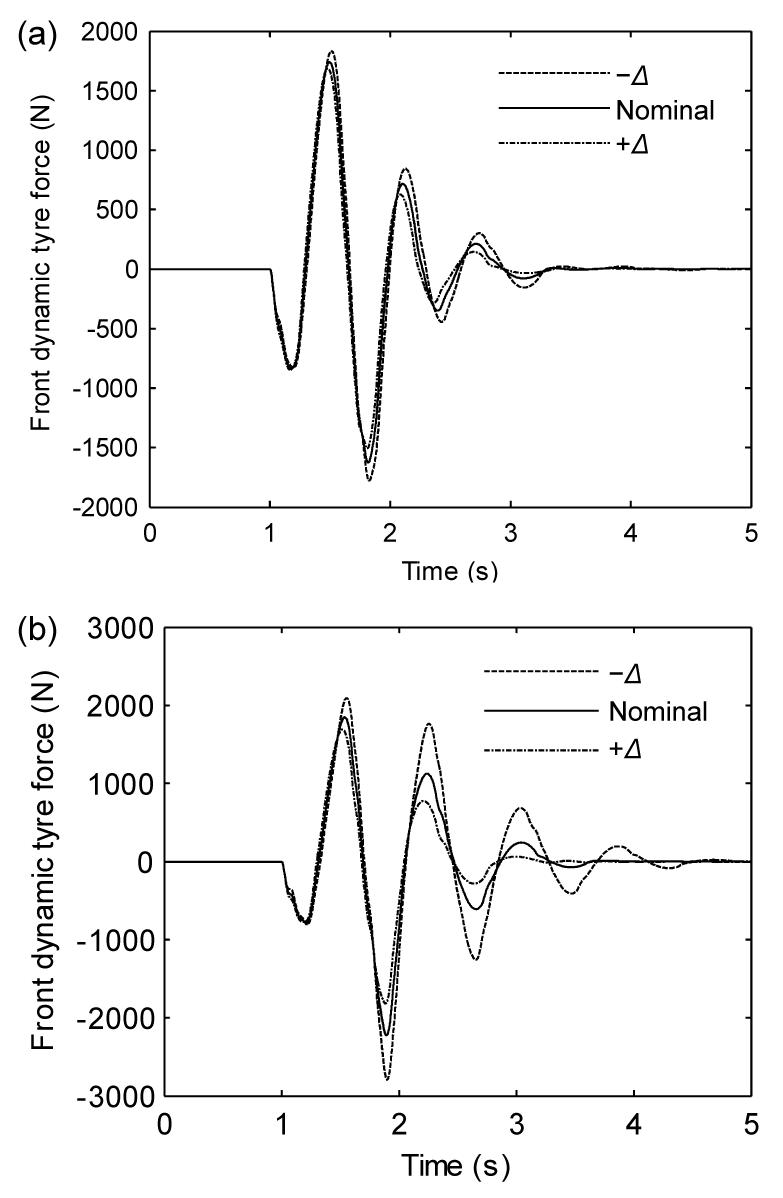 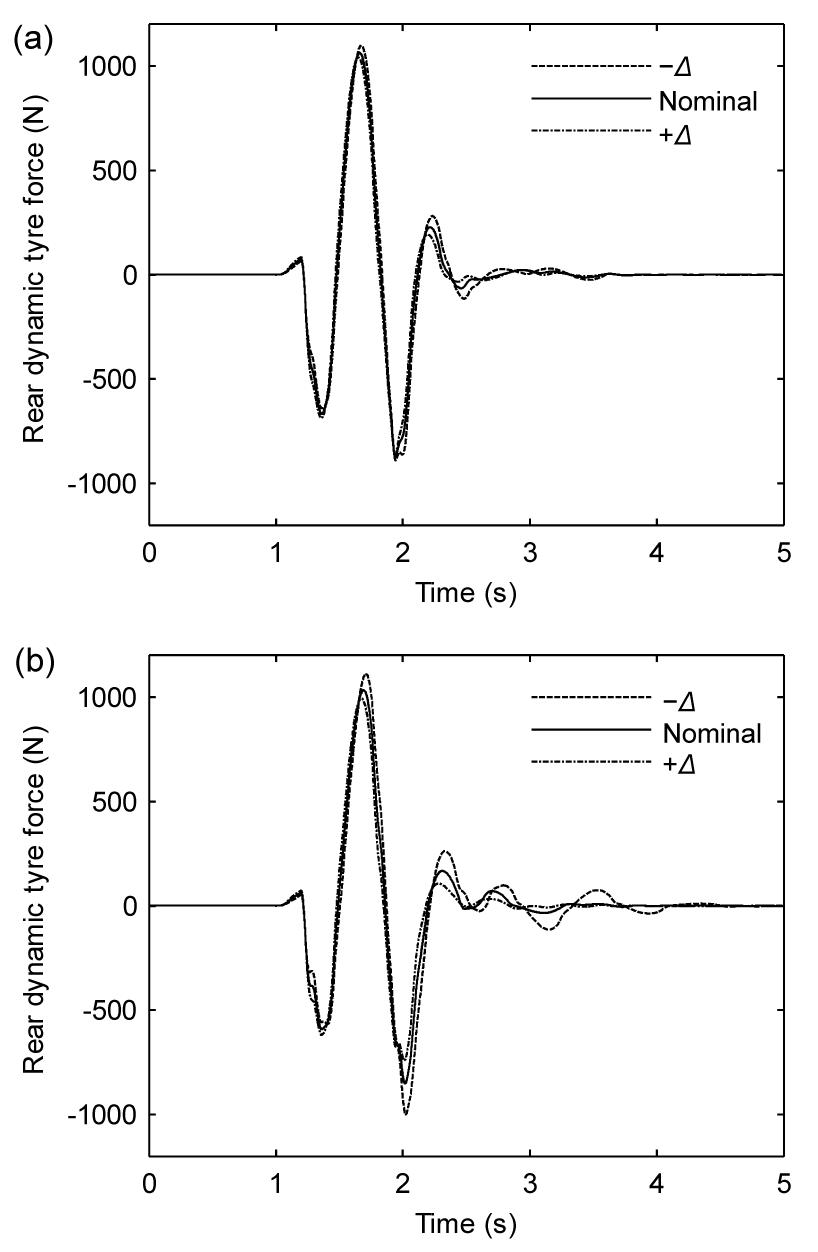 Fig.16
Sprung mass acceleration time history for AVSS (a) and PVSS (b) Fig.18
Actuator force time history for AVSS (a) and PVSS (b)

5.3.  Effect of the inner force control loop on AVSS performance Fig.19
Comparison of AVSS sprung mass acceleration response with and without force control
(a) PSD; (b) Time history

[42] Sam, Y.M., Hudha, K., 2006. Modelling and Force Tracking of Hydraulic Actuator for an Active Suspension System. , Proceedings of the IEEE Conference on Industrial Electronics and Applications, 1-6. :1-6.