1. EDVAM: a 3D eye-tracking dataset for....2. A 3D numerical simulation of....3. Theory and techniques for....4. PREPARATION AND CHARACTERISTICS OF....5. Research on ultrasonic detection of....6. Determination of particle size....7. Effect of orbital errors on the....8. Improving the wind and temperature....9. Measurement of oil volume fraction....

Abstract: A trajectory imaging based method for measuring the velocity and diameter of coal particles was presented. By using an industrial charge-coupled device (CCD) camera and a low power semiconductor laser, the images of coal particles under relatively long exposure time were recorded and then processed to yield both the velocities and sizes. Fundamental research on this method with special attention to recording parameters, e.g., magnification factor and exposure time, was carried out. For most of the test cases, the results agree with those obtained by particle image velocimetry (PIV) and shadow imaging method. Measurements with good accuracy can be obtained when the imaging magnification factor and exposure time are set appropriately, making N be larger than 3.5, and R between 5–7, where N and R are the number of pixels occupied by the average width and the ratio of length to width of particle trajectory on the image, respectively. The work indicates the feasibility and potential application of the present measurement method for online measurement of coal powder in pipes in industrial power plants.

Pneumatic conveyance of coal powder plays an important part in power plants, and it can influence the capacity of coal mills, efficiency of boiler combustion and the prevention of material degradation. In order to achieve the maximum efficiency of the power plant, it is necessary to measure the parameters of the flow in an on-line continuous manner, such as flow velocity and particle size distribution.

The available techniques for particle size and velocity measurement can be classified into three categories: probe methods, non-contact sensor techniques and optical imaging methods. A near forward scattering probe was proposed (Lee Black et al., 1996) for particle velocity and size measurement. However, the major disadvantage of the probe is its disturbance to flow field. Non-contact sensor techniques have been used for measuring pulverized coal concentration, such as capacitor (Hu et al., 2006) and γ-ray attenuation methods (Yan et al., 1994). Among the techniques for particle velocity measurement, particle image velocimetry (PIV) (Raffel et al., 2001; Adrian and Westerweel, 2010) is capable of measuring the velocity distribution of a particle flow field in planar (2D) fields instantaneously and non-invasively, but the high price and complexity of the system restrict its application in online industry monitoring and measurement. Phase doppler particle analyzer (PDPA) (Albrecht et al., 2002) and multi-pulses laser holographic technique (Malkiel et al., 2004) can obtain the velocity and size of particles at the same time. However, PDPA is a single-point technique, and the system of the holographic technique is considerably complex. In recent years, a novel system based on imaging the particle trajectory to measure both particle size distribution and volumetric concentration by combining electrostatic sensors was developed (Carter and Yan, 2003; Carter et al., 2005; Peng et al., 2008; Song et al., 2009). In their research, the velocity of particles is determined by the cross correlation of two signals derived from a pair of electrostatic sensors and the volumetric concentration of particles is obtained using a digital imaging sensor.

Pulverized coal in power plants has characteristics of strong absorption and weak scattering, which makes it difficult to get information of particle velocity and size through processing the particle’s transient image. The authors have developed an imaging-based system to study the scattering light of coal powder at different detection angles and exposure times. The previous study (Wu et al., 2011) showed that the trajectory image of the coal particle is very clear under relatively long exposure time. In the present paper, a trajectory imaging based method was proposed to measure the velocity and diameter of coal particles using a low-cost charge-coupled device (CCD) camera and a low power semiconductor laser, with special attention to the recording parameters, e.g., magnification factor and exposure time. 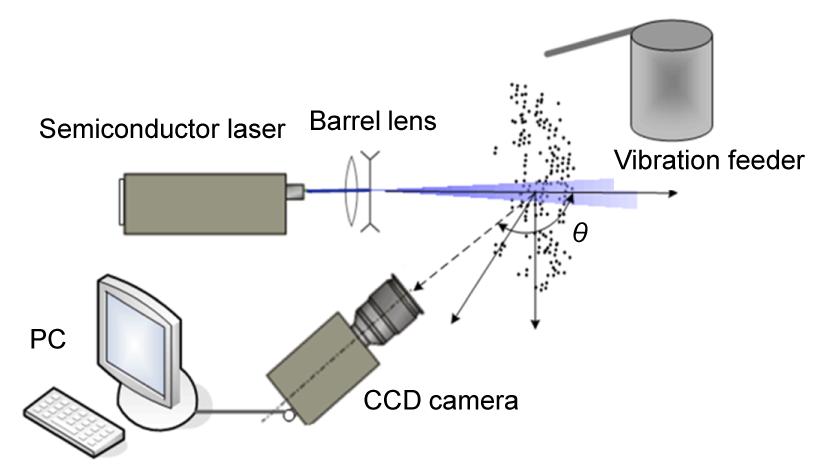 Fig. 2a shows a raw trajectory image of the coal particle field. Most of the trajectories are clearly recorded. A small number of the particle trajectories are not fully exposed (trajectory 1). In addition, the trajectories of some particles (such as trajectory 2), which may move out of the laser sheet, are fuzzy. The trajectory image was processed to retrieve the particle velocity and size, with the flow chart of the image preprocessing algorithm shown in Fig. 3. The raw image was firstly binarized by the Otsu algorithm (Otsu, 1979) to extract the particle trajectory from its background (Fig. 2b). Then morphology operations were applied to the binary image. Each connected region in binary images was labeled, except overlapping particles (trajectory 3) or those attached to the boundary (trajectory 4) (Fig. 2c). The circumscribed rectangle with the minimal area of each labeled region was computed. The computed rectangle vertex coordinates were used to calculate the length and width according to Eqs. (1) and (2) (Fig. 2d). where Xi and Yi are the rectangle vertex coordinates in the x and y directions, respectively, i=1, 2, 3, as shown in Fig. 2d. 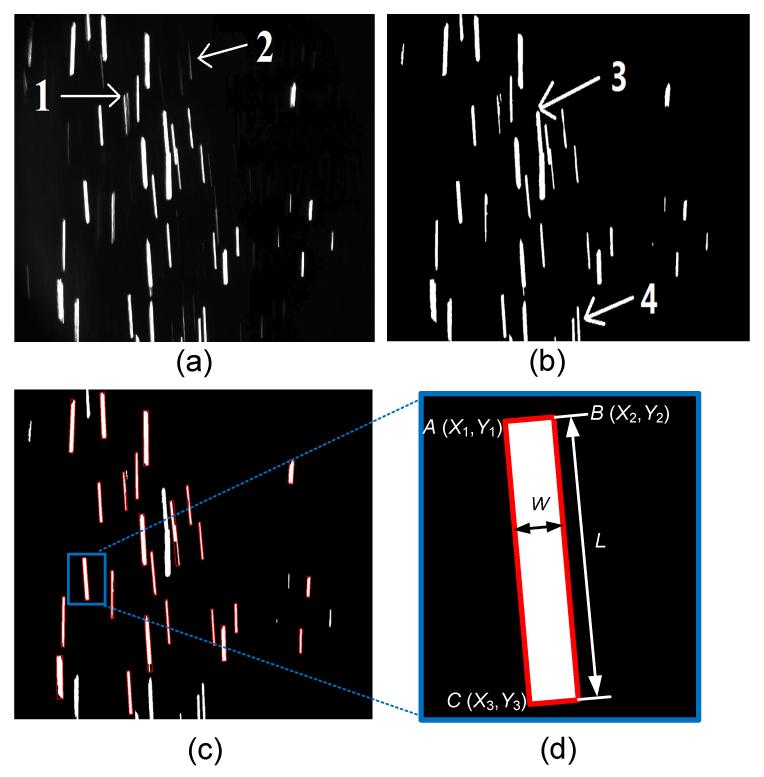 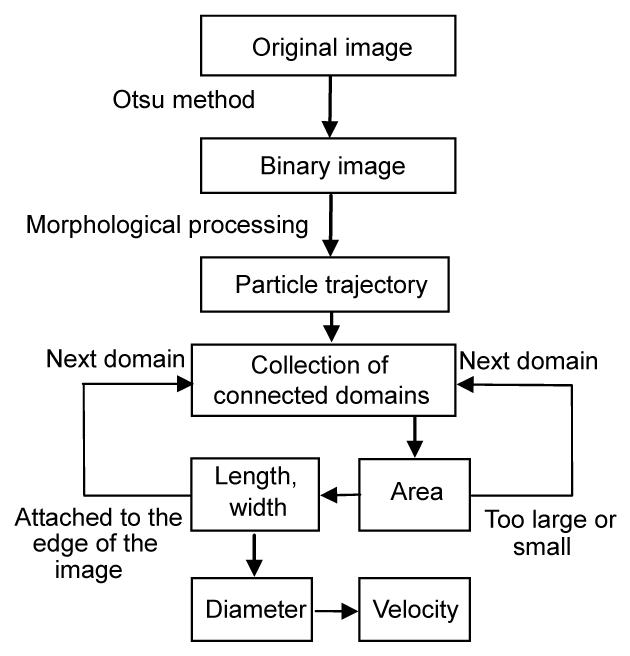 Fig.3
Image processing procedures
Let the CCD exposure time be δ and the imaging magnification be β, then the particle velocity u and diameter d can be obtained as follows:

This algorithm was implemented in C++ program using Open Source Computer Vision Library (OpenCV) (Bradski and Kaehler, 2008). One hundred images can be processed in the batch processing mode within 4 s.

In this section, the feasibility of the trajectory imaging method is firstly validated, and then the effects of recording parameters on the measurement results were investigated. Imaging spatial resolution, determined by the resolution and imaging magnification of the CCD chip, is related to particle diameter measurement, and exposure time of CCD is related to velocity measurement.

To validate the feasibility of simultaneously measuring the size and velocity of coal powder by trajectory imaging, about 2000 coal particles with a size range of 100–125 μm were recorded under the exposure time of 2 ms, and imaging magnification β=0.35. The obtained size and velocity were compared with that using the shadow image method and PIV, respectively. Fig. 4 shows a typical shadow image of the coal particles. As shown in Fig. 5, both the particle size distribution and velocity distribution from trajectory imaging agree generally with the results of the shadow image method and PIV. The discrepancy of mean diameter is 8%, with root mean square (RMS) of 23%, and the discrepancy of mean velocity is 9.8%, with RMS of 28%. 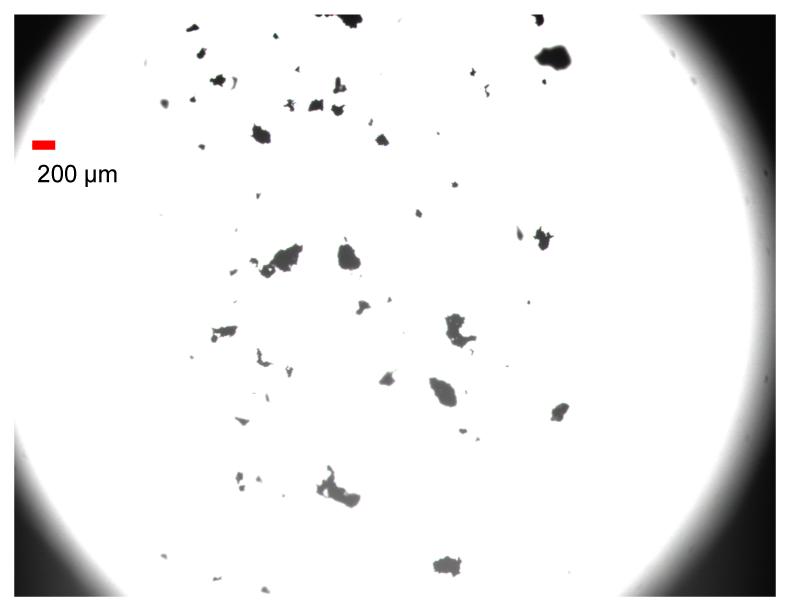 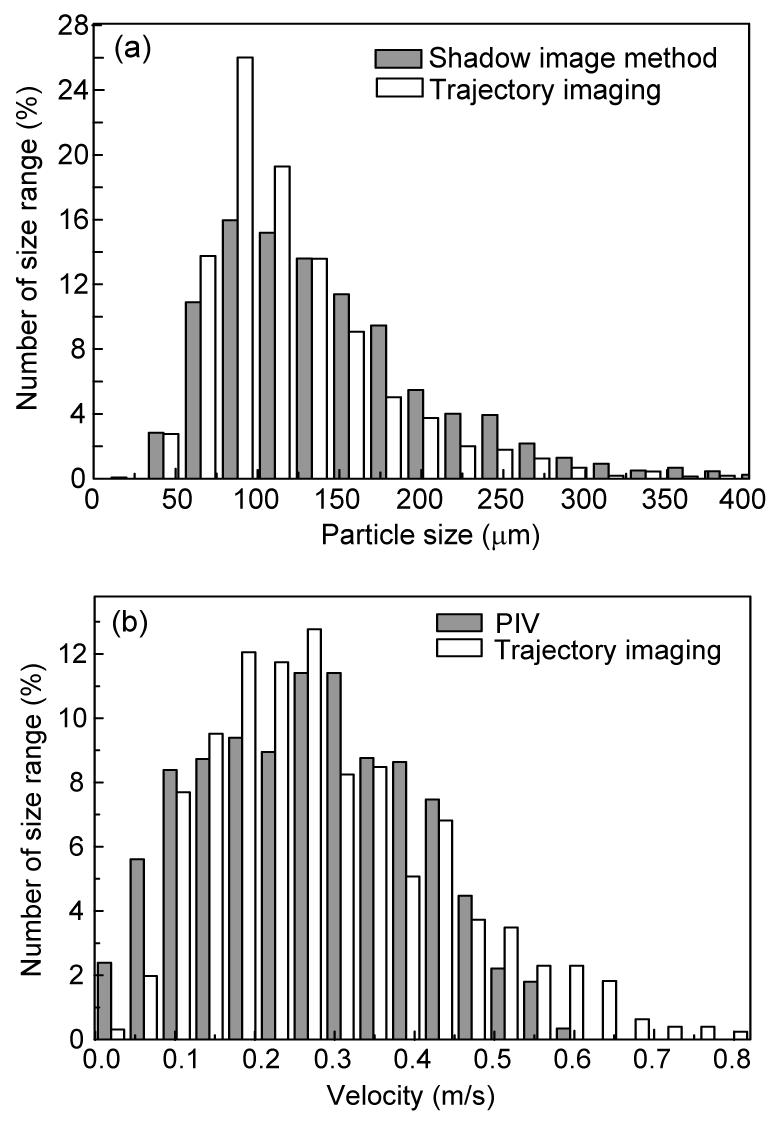 Fig.5
Comparison of particle size (a) and velocity distribution (b) results from trajectory imaging with those of shadow image method and PIV
The most obvious reason for such errors in particle size measurement is that a small number of coal particles were partly illuminated or not fully exposed, leading to the results from the trajectory imaging method to be lower than that of shadow image. Additionally, it is possible that particle overlapping could have contributed to this small discrepancy in velocity distribution between trajectory imaging and PIV. In spite of the issues discussed above, the results obtained are acceptable and the system shows great promise in online industrial measurement.

Fig. 6 shows the comparison of size distribution of the coal particles with a diameter of 74–100 μm obtained by the trajectory imaging method and shadow imaging method. It is carried out in different imaging magnifications with more than 1000 coal particles captured in each case. 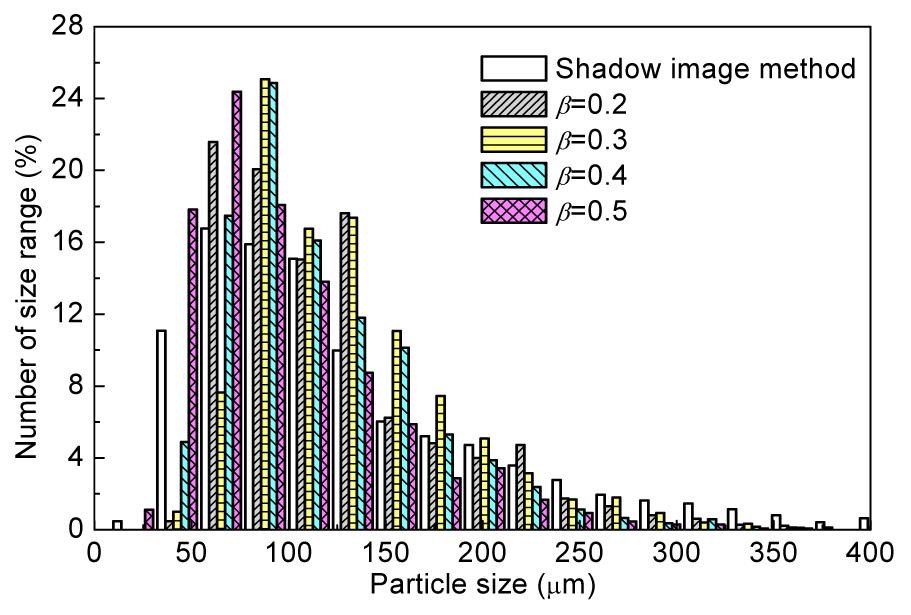 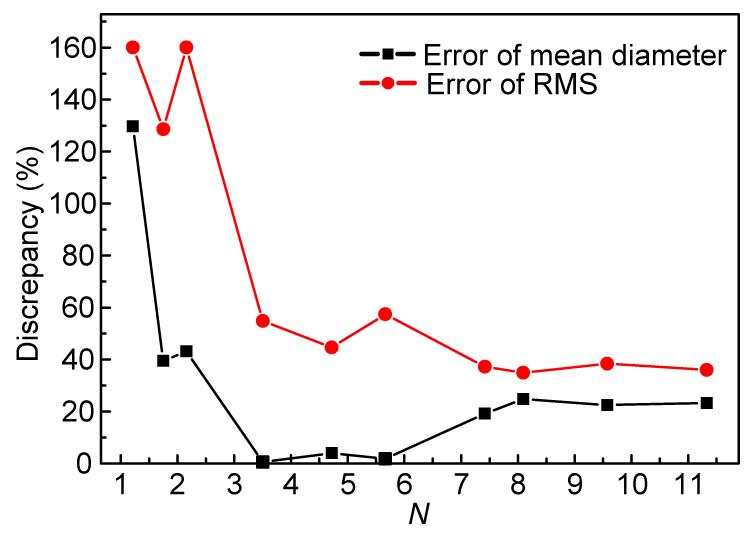 Fig.7
Discrepancies with different N
In order to verify the N min obtained above, coal particles with size range of 100–125 μm and 125–150 μm were measured under N=4. Fig. 8 is the trajectory imaging size distribution of 100–125 μm (Fig. 8a) and 125–150 μm (Fig. 8b) compared with the shadow imaging method. The consistency of the two measurements shows that N min is reasonable. 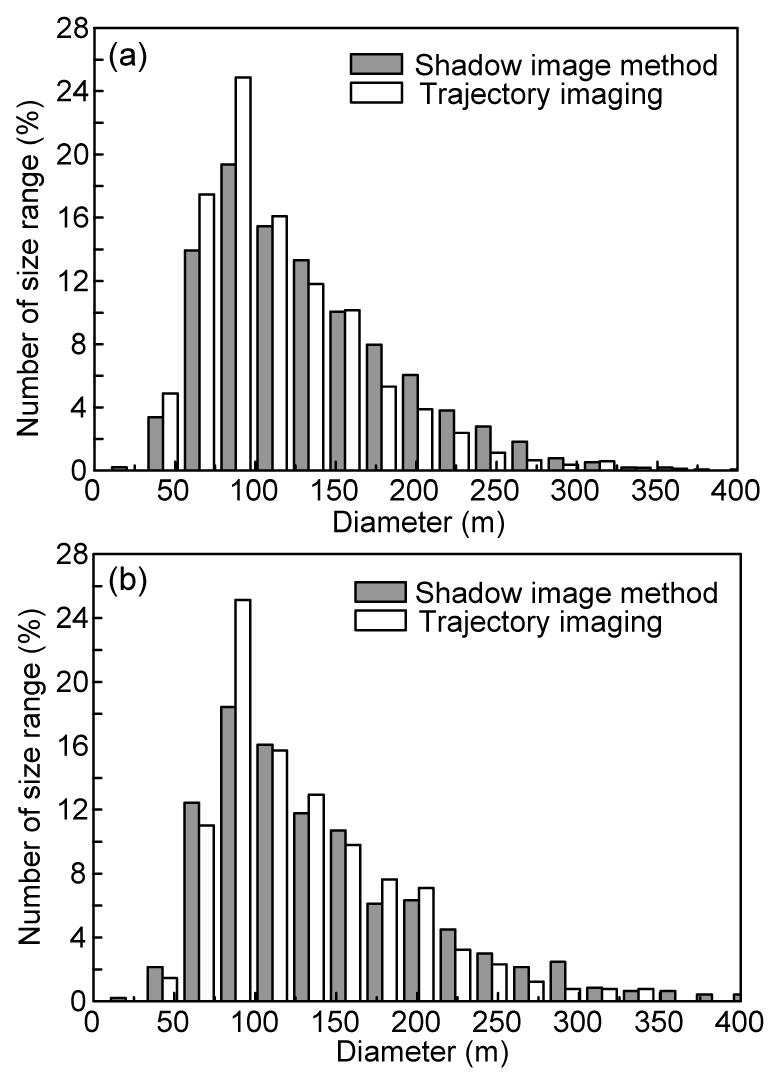 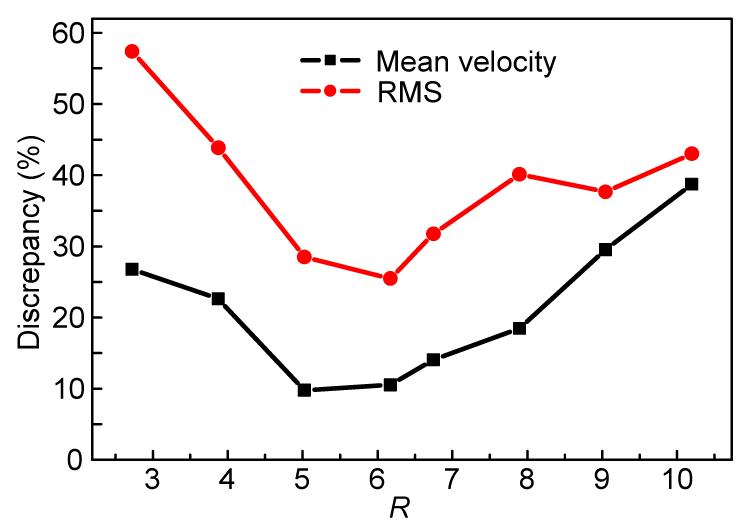 Fig.10
Discrepancy of variable R
The work presented here has shown that this online system is capable of measuring the particle size distribution and velocity of pulverized coal particle simultaneously. Fig. 11 shows the arrangement of this measurement system applied in an industrial situation. Note that at high concentrations this measurement system may become inaccurate due to many overlapping particle trajectories in the image, so the current system only works in relatively dilute phase flows, such as coal powder flow, typically with a mean particle diameter of 70 μm and solid concentration of 0.06–0.6 kg/kg in pipes in power plants. Another issue is the pipe fouling, which can be settled by boiler blowing. 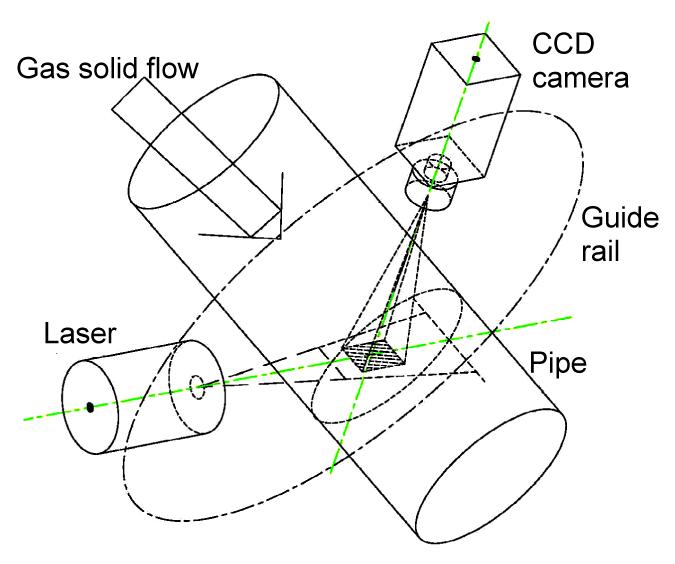 This paper has presented a method for online size and velocity measurement of coal particles by imaging the trajectory. The trajectory images of coal particles were recorded by an industrial CCD camera and then processed to yield both the sizes and velocities. It is found that the results agree well with those from the shadow image method and PIV, which shows the feasibility of the present method for coal particle measurement. Further experiments with different imaging magnification factors and exposure times were carried out. Results reveal that both the imaging magnification factor and exposure time should be appropriately set to obtain a good measurement of particle velocity and size, making N larger than 3.5 and R between 5 and 7. This work can be a reference for choosing the appropriate recording parameters, which takes an important step towards successful application of the trajectory imaging method for coal particle measurement in coal fired power plants.