1. Electrochemical properties of....2. Theory and techniques for....3. The impact of NiO on microstructure....4. Electrocatalysis method for....5. A novel organosilicon-based ionic....6. A high-capacity graphene/mesocarbon....7. EDVAM: a 3D eye-tracking dataset for....8. Effect of polyoxypropylene chain....9. Synthesis of....

Abstract: {3-[2-(2-methoxyethoxy) ethoxy]-propyl} triethoxysilane (TESM2) was synthesized and used as an electrolyte additive to improve the performances of lithium-ion batteries (LIBs). The electrochemical properties of the electrolyte (1 mol/L lithium hexafluorophosphate (LiPF6)/ethylene carbonate (EC):diethylene carbonate (DEC):dimethyl carbonate (DMC), 1:1:1) with different contents of TESM2 were characterized by ionic conductivity measurement, galvanostatic charge/discharge test of graphite/Li half cells, and electrochemical impedance spectroscopy. Both the cycling performances and C-rate capabilities of graphite/Li half cells were significantly improved with an optimized content of 15% TESM2 in the electrolyte. The graphite/Li half cell delivered a very high specific capacity of 370 mAh/g at 0.2C rate without any capacity loss for 60 cycles, and retained a capacity of 292 mAh/g at 2C rate. The solid electrolyte interphase (SEI) film on the surface of the graphite anode was investigated by scanning electron microscopy (SEM) and energy dispersive spectroscopy (EDS), indicating that TESM2 was effectively involved in the formation of SEI film on the surface of graphite.

Lithium-ion batteries (LIBs) have attracted great interest since the 1990s because of their unique properties such as high energy density, high voltage, and long cycling life. With the increasing demand for electric vehicles (EVs), much effort has been devoted to developing LIBs with long cycling life and high rate capacity (Hao et al., 2010; Li et al., 2011).

The electrolyte is an important component in LIBs and plays a key role in the electrochemical performances of LIBs by forming a solid electrolyte interphase (SEI) film on the surface of a graphite anode during the initial charging/discharging process. The structure and components of the SEI film critically determine the stability of SEI film, and thus have great impact on the performance of LIBs (Zhang, 2006; Walkowiak et al., 2010). Therefore, a large number of additives have been reported to improve the interfacial properties of LIBs, such as reduction-type additives vinylene carbonate (VC) (Aurbach et al., 2002; 2004; Contestabile et al., 2003), vinyl ethylene carbonate (VEC) (Hu et al., 2004), reaction-type additives CO2 (Sakamoto et al., 2001), and lithium bis(oxalato) borate (LiBOB) (Xu et al., 2002).

In this work, we synthesized a triethoxysilane with oligo(ethylene oxide) substituent, {3-[2-(2-methoxyethoxy) ethoxy]-propyl} triethoxysilane (TESM2), and used it as a film forming additive in the electrolyte of 1 mol/L lithium hexafluorophosphate (LiPF6)/ethylene carbonate (EC):diethylene carbonate (DEC):dimethyl carbonate (DMC) (1:1:1, defined as LB303) for a graphite anode. The film forming capability was characterized by the electrochemical impedance spectroscopy (EIS), scanning electron microscopy (SEM), and energy dispersive spectroscopy (EDS) analyses. The electrochemical performances of the electrolytes with different contents of TESM2 were investigated in graphite/Li half cells.

1H NMR (nuclear magnetic resonance) and 13C NMR spectra were taken on a Bruker avence 600 spectrophotometer. Ionic conductivity of electrolytes (LB303) with different contents of TESM2 at room temperature were measured using a YSI 3200 conductivity instrument equipped with an YSI 3253 conductivity cell (conductivity meter DDS-310). The water content of electrolytes was measured by the Karl-Fischer coulometric moisture titrator (831 KF). All the cells were assembled under a dry argon atmosphere in glove box (Mikrouna, H2O and O2<1 ppm). The constant discharge and charge measurements of the graphite/Li cells were carried out with a multi-channel battery test system (Neware BTS-610) using 2032 coin cells at room temperature. The EIS was measured on an electrochemical analyzer (BAS-ZAHNER IM6) with 5 mV AC amplitude applied in the frequency range of 0.01 Hz to 100 kHz. SEM and EDS were performed on the Hitachi S4800 to inspect the surface morphology of the graphite electrode. Before SEM and EDS, the cycled graphite electrode was washed three times with pure DEC followed by vacuum drying overnight at room temperature.

The TESM2 was synthesized through a hydrosilylation reaction of triethoxysilane with oligo(ethylene oxide) allyl methyl ether using PtO2 as a catalyst to yield 80% (Scheme 1) (Ghosh et al., 2005). Its chemical structure was confirmed by NMR (Section 2). The basic physical properties of TESM2 at room temperature were collected, showing a low viscosity (3.26 mPa·s), moderate dielectric constant (4.88) and ionic conductivity (1.14 mS/cm doped with 1 mol/L LiTFSI).

Fig.1
Relationship between the ionic conductivity and doping content of TESM2 in LB303 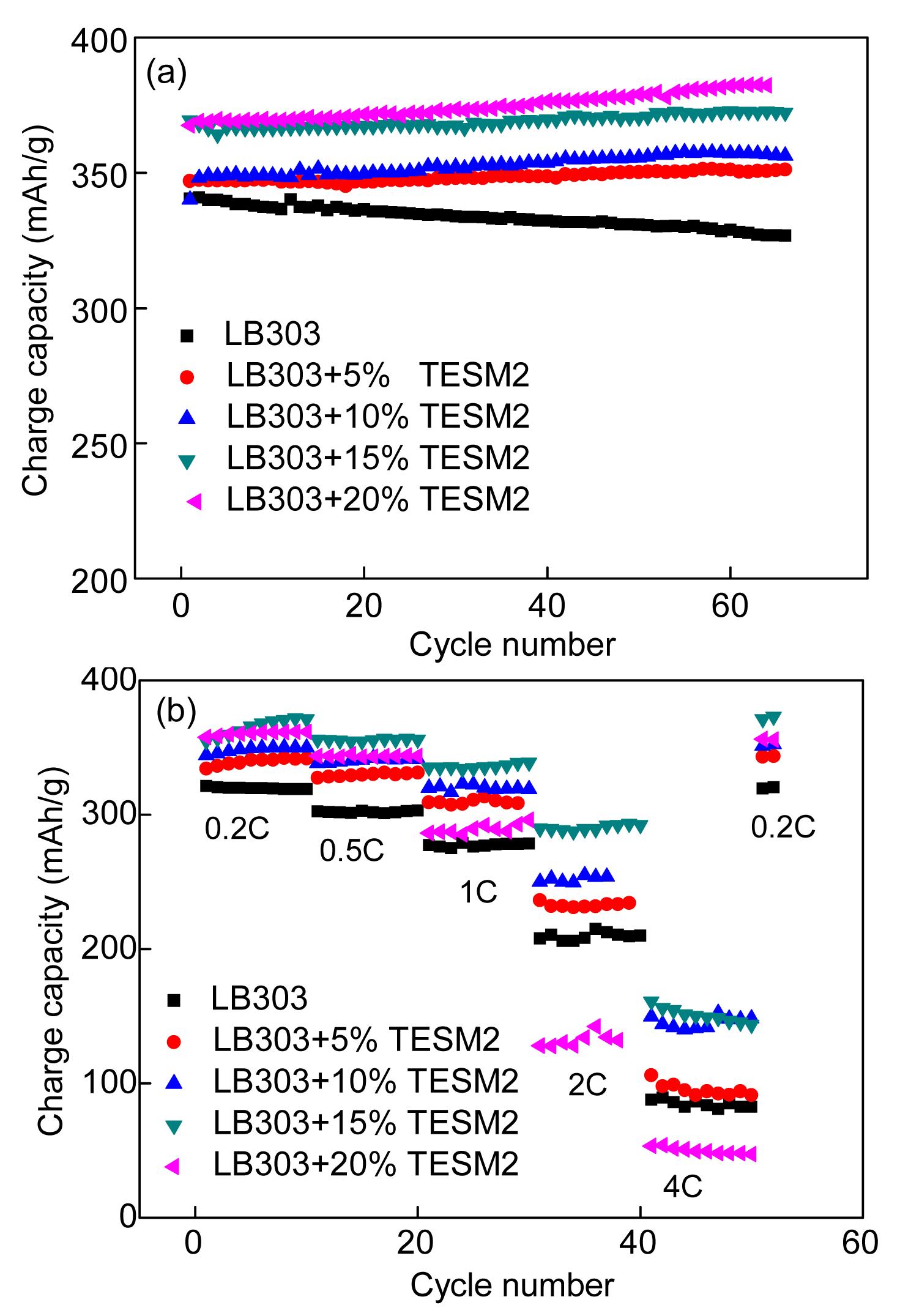 Fig.2
Cycling performance at 0.2C rate (a) and C-rate performance (b) of graphite/Li batteries with different doping contents of TESM2 in LB303

The EIS and surface analysis of these graphite electrodes were carried out to investigate the underlying impact of the doping content of TESM2 on the cycling and C-rate performance. The impedance of graphite/Li cells with different contents of TESM2 in LB303 after 4 cycles are shown in Fig. 3. In the Nyquist plots, the semicircles at high frequency are related to the SEI film resistance and the impedance of lithium ion transport through the interphase of electrolyte and electrode (Hao et al., 2010; Li et al., 2011). The SEI film resistances of the cells with 5%, 10%, and 15% additions were 14.0 Ω, 15.0 Ω, and 15.5 Ω, respectively, as compared with higher values of 18.0 Ω and 17.7 Ω for the cell without and with 20% addition in the electrolyte, respectively. This decrease of the resistance with proper doping content implies a higher lithium ion migration rate and better kinetic characters, thus the C-rate performance of the cells was improved. 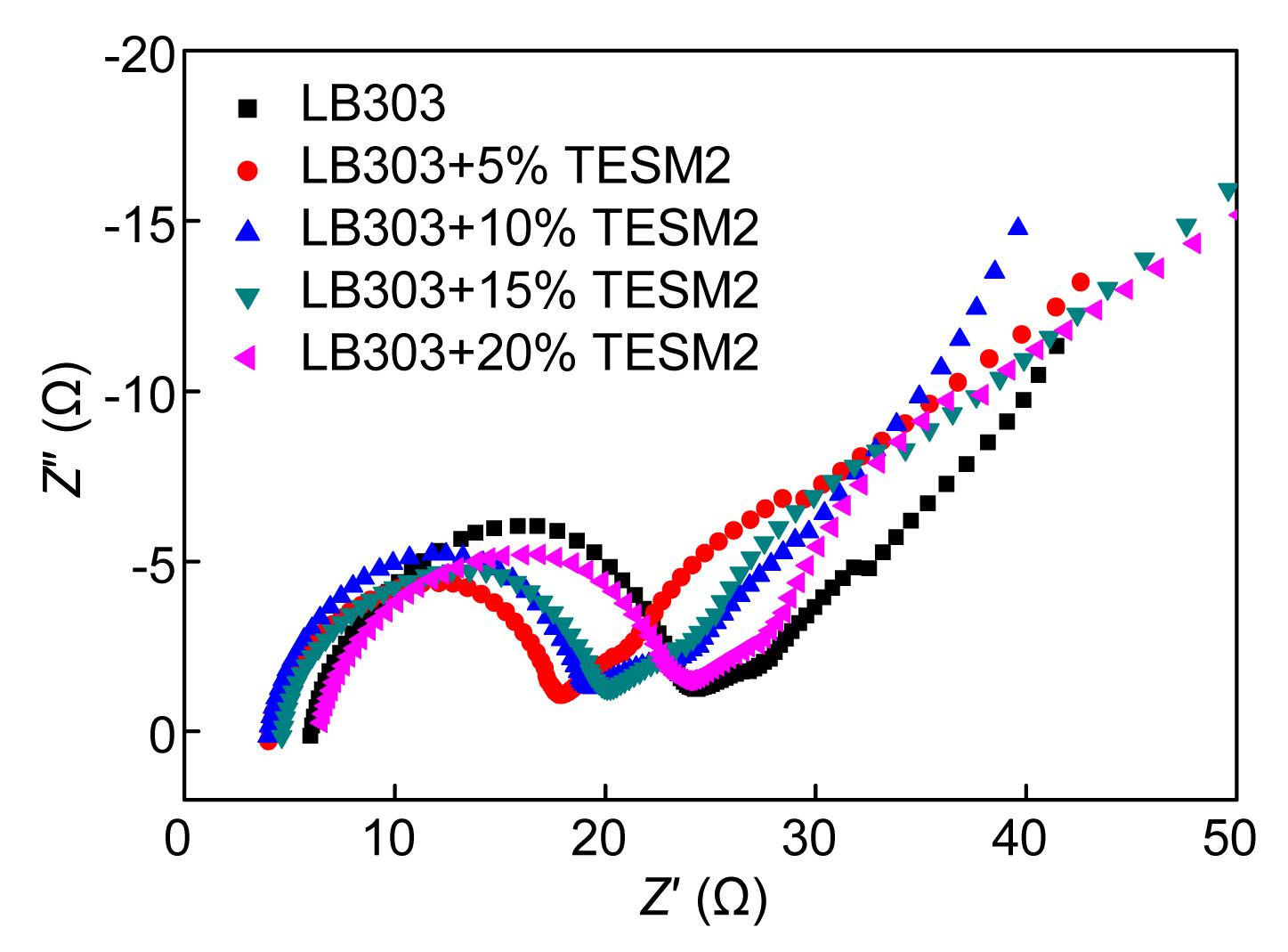 Fig.3
Impedance of graphite/Li batteries with different doping contents of TESM2 added in LB303 after 4 cycles 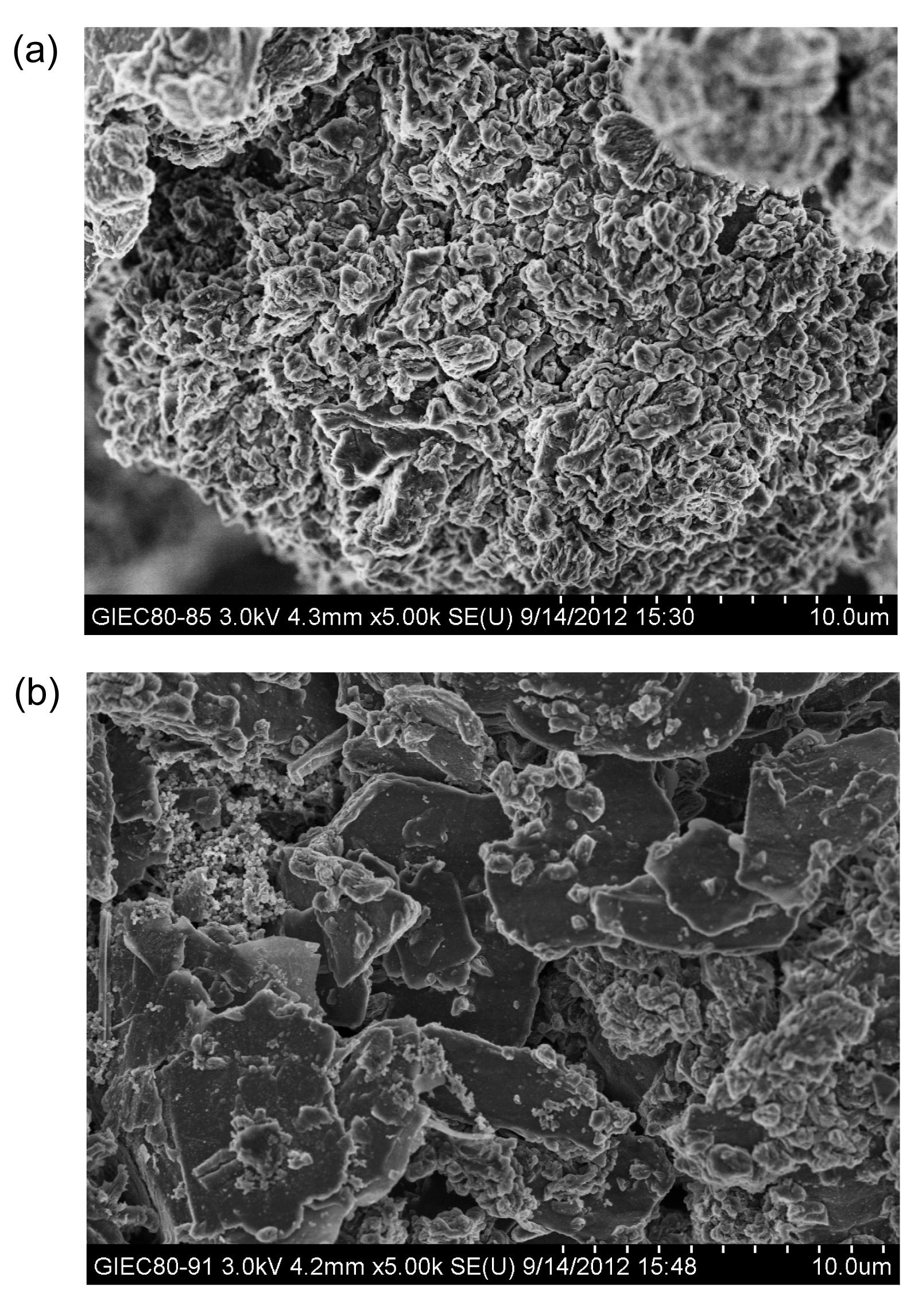 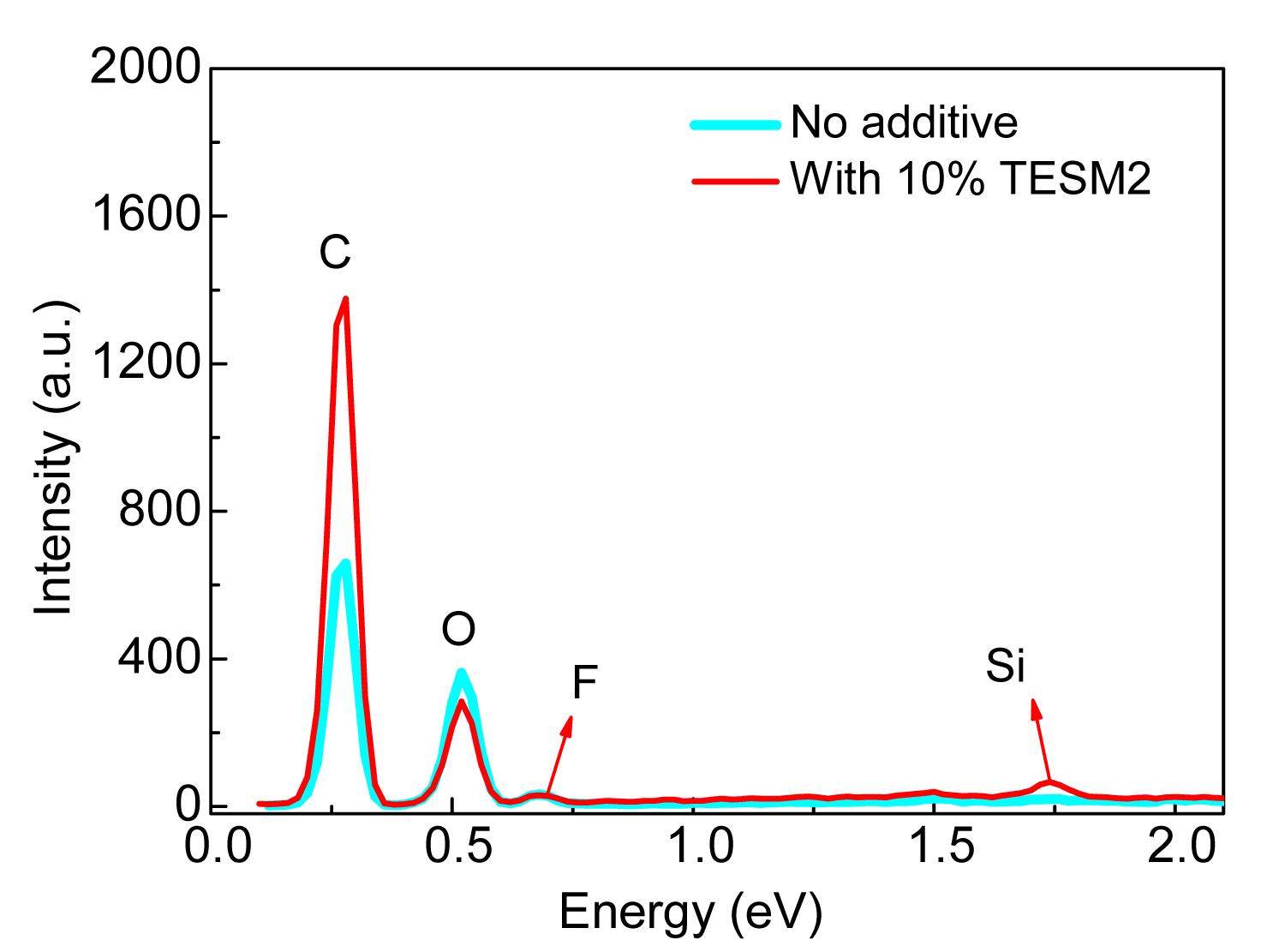 Fig.5
EDS spectrum of graphite electrode without and with 10% TESM2 after 3 cycles

Oligo(ethylene oxide) functionalized triethoxy-silane (TESM2) was synthesized as film forming additive for graphite anode in lithium-ion batteries. In an electrolyte of 1 mol/L LiPF6/EC:DEC:DMC with an optimized content of triethoxysilane compound (15%), both the cycling performances and C-rate capabilities of graphite/Li half cells are significantly improved. The graphite/Li half cells delivered a very high specific capacity of 370 mAh/g at 0.2C without any capacity loss for 60 cycles, and retained a capacity of 292 mAh/g at 2C rate. EIS, SEM, and EDS analyses disclosed that the TESM2 participated in the formation of stable and effective SEI film on the surface of graphite electrode, thus improved the performance of graphite half cells. Therefore, triethoxysilane compound with oligo(ethylene oxide) substituent is a promising additive candidate to be used for improving the performances of LIBs.


*&nbspProject supported by the National Natural Science Foundation of China (No. 50973112), the Hundred Talents Program of the Chinese Academy of Sciences (CAS), the CAS-Guangdong Collaboration Program (No. 20108), the Science & Technology Project of Guangzhou (No. 11A44061500), and the Amperex Technology Ltd. (China)