1. Theory and techniques for....2. Development of an ε-type....3. Performance of a precooled 4 K....4. Safety analysis of optimal outriggers....5. Adaptive Lagrange finite element....6. New method for high performance....7. On the fracture resistance of....8. High temperature mechanical....9. Experimental study of the shear....

Abstract: The aim of this study is to characterize the interfacial fracture toughness of a micro-lattice core based sandwich structure from quasi-static to dynamic rates of loading. The modified three-point bend (MTPB) sandwich beam was used to characterize the interfacial properties of these sandwich structures. Dynamic tests were undertaken of up to 3 m/s using a purpose-built instrumented drop-weight impact tower. Data reduction was accomplished through the use of a compliance calibration procedure similar to that used for characterizing the delamination resistance of composites. The flexural properties of sandwich beams were investigated through three-point bend tests at a cross-head displacement rate of up to 3 m/s. A detailed examination of the impact region highlighted the failure processes in these systems and this was related to the data from the quasi-static flexural tests. The globalized deformation and energy absorption during progressive were also discussed.

There is a growing interest in the potential offered by metallic foams, such as sandwich structures that are based on aluminium and steel for use in a range of energy absorbing structures. Many of the next generation of aerospace materials will employ advanced manufacturing techniques for cellular materials with a high strength to weight ratio and improved impact resistance under critical loading cases, such as foreign object impact from birds, tire rubber, and runway debris. However, one of the principal limitations of these systems is the irregularity of the cell structure within the metal foam, an effect that can result in overly conservative design criteria. Recently, workers have highlighted a number of core architectures that offer superior strength and stiffness to weight ratios to those offered by foams (Deshpande and Fleck, 2001; Deshpande et al., 2001a; 2001b; Chiras et al., 2002; Wang et al., 2003; Zok et al., 2003). The complex architecture of the unit-cells in these cores can now be produced using the selective laser melting (SLM) process. SLM is a layered manufacturing technique by which parts of high complexity can be built from metal powder in relatively short timescales (Brooks et al., 2005).

Lattice structures can be used as core materials in efficient aerospace sandwich construction. The structure weight can be saved by up to 50% and the use of additive manufacturing techniques would also reduce material wastage in manufacturing. Currently 90% of the material that is used to make an airframe is wasted, due to the machining (subtractive) techniques used. Hence, this exploitation addresses lighter structures and a reduced material wastage, with both environmental and cost benefits.

The studies of lattice structures as core materials in sandwich construction have shown that they offer a high degree of homogeneity of mechanical properties over traditional stiffened structures. Work has been carried out in studying the mechanical properties, crush behaviours, as well as impact properties of the selective laser melting (SLM) SS316L stainless steel and Ti64 titanium alloy micro-lattice (Santorinaios et al., 2006; McKown et al., 2007; 2008; Mines, 2008; Mines et al., 2008; Shen et al., 2010; 2013). This study aims to discuss the interfacial fracture properties of a stainless steel lattice core-based sandwich structure in order to improve the damage tolerance of sandwich structures and increase the toughness between skin and core.

Stainless steel 316L lattice structures were manufactured using the SLM technique (Brooks et al., 2005). The technique was used to manufacture beam samples with dimensions of 150 mm×25 mm×25 mm for the modified three-point bend (MTPB) test, and 100 mm×20 mm×20 mm for the flexural test. The hierarchy of the lattice structure was formed from the repetition of a single unit-cell based on a ±45° boay-centered cubic (BCC) geometries, which contains a node located at the centre of a cube from which all the unit-cell struts radiate out to the corner vertex locations of the cube. The struts have an average cross-sectional diameter of 0.2 mm, determined from scanning electron microscope (SEM) image analysis. The density of the lattice structure is 8.0 g/cm3.

The metallic cores were incorporated into sandwich beams using a relatively simple hot-stamping manufacturing technique (Reyes and Cantwell, 2000). The skins of the sandwich structures were based on 12 layers woven carbon fibre reinforced plastic (CFRP) for the MTPB test, giving a nominal thickness of 3 mm in order to provide enough flexural rigidity during the test to make sure that the top skin will not be fractured before debonding; and the skins of samples for flexural test were based on four layers of woven CFRP, giving a nominal thickness of 1 mm. The pressure applied during moulding was maintained below the yield stress of the core structure, and the temperature was maintained at 125 °C for 2 h. After the mould had cooled, the sample was removed in preparation for testing.

Impact tests were conducted on the instrumented drop-weight impact tower as shown in Fig. 1. An instrumented carriage was released from the required height in order to generate increased levels of crush within the samples. The variation of load with time during the impact tests was measured using a piezo-electric load-cell positioned directly underneath the base on the test rig. The velocity of the impactor during the impact event was measured using a high speed camera. The velocity versus time traces from the velocimeter were recorded by a dedicated computer and subsequently integrated to yield displacement versus time traces. Dynamic MTPB and flexural tests were also carried out on the drop-weight tower. Details of the impact tests on the sandwich beams are given in Table 1. Fig.1
The drop-weight rig used for characterising the dynamic properties of samples

Details of the impact tests applied on the sandwich beams
The MTPB was developed to characterize the interfacial fracture toughness of the sandwich structures (Cantwell et al., 1997). The Mode I interlaminar fracture toughness G IC was determined using an experimental compliance approach, where n is the slope of this plot, then where P is the load, δ is the displacement, b is the specimen width, and a is the crack length.

In the case of the MTPB sample, a 15 m wide folded aluminum foil was placed at one end of the beam between the upper composite skin and the BCC lattice and aluminum foam core to act as a pre-crack. The lower skin and the core at this end of the beam were removed, leaving a section of the upper face-sheet material protruding from the remaining sandwich specimen (Fig. 2). A loading rate between 1.7×10−6 m/s and 3 m/s was employed. The crack length was measured by an eye on the specimen edge, using a travelling microscope or high speed camera. A thin layer of white ink was painted on the specimen edge, with dark marks made every 5 mm.

Fig.2
Schematic of the modified three-point bend (MTPB) sandwich specimen
The flexural response of the sandwich beams based on stainless steel 316L BCC lattice cores was investigated through a series of three-point bend tests at crosshead displacement rates from 4.2×10−6 m/s to 4 m/s.

Prior to conducting the MTPB tests, the nature of the sandwich core-skin interface was investigated. Fig. 3 shows a side view of a three-point bend sandwich beam, the strands penetrate to a depth of approximately two plies (i.e., half way through the thickness of the skin). This is consistent along the length of the beam, suggesting that the manufacturing process can be carefully controlled by uniformly applying the correct pressure to achieve a desired depth of penetration into the skin. This results in a smooth surface finish, with no surface irregularities caused by stainless steel strands penetrating into the skin. 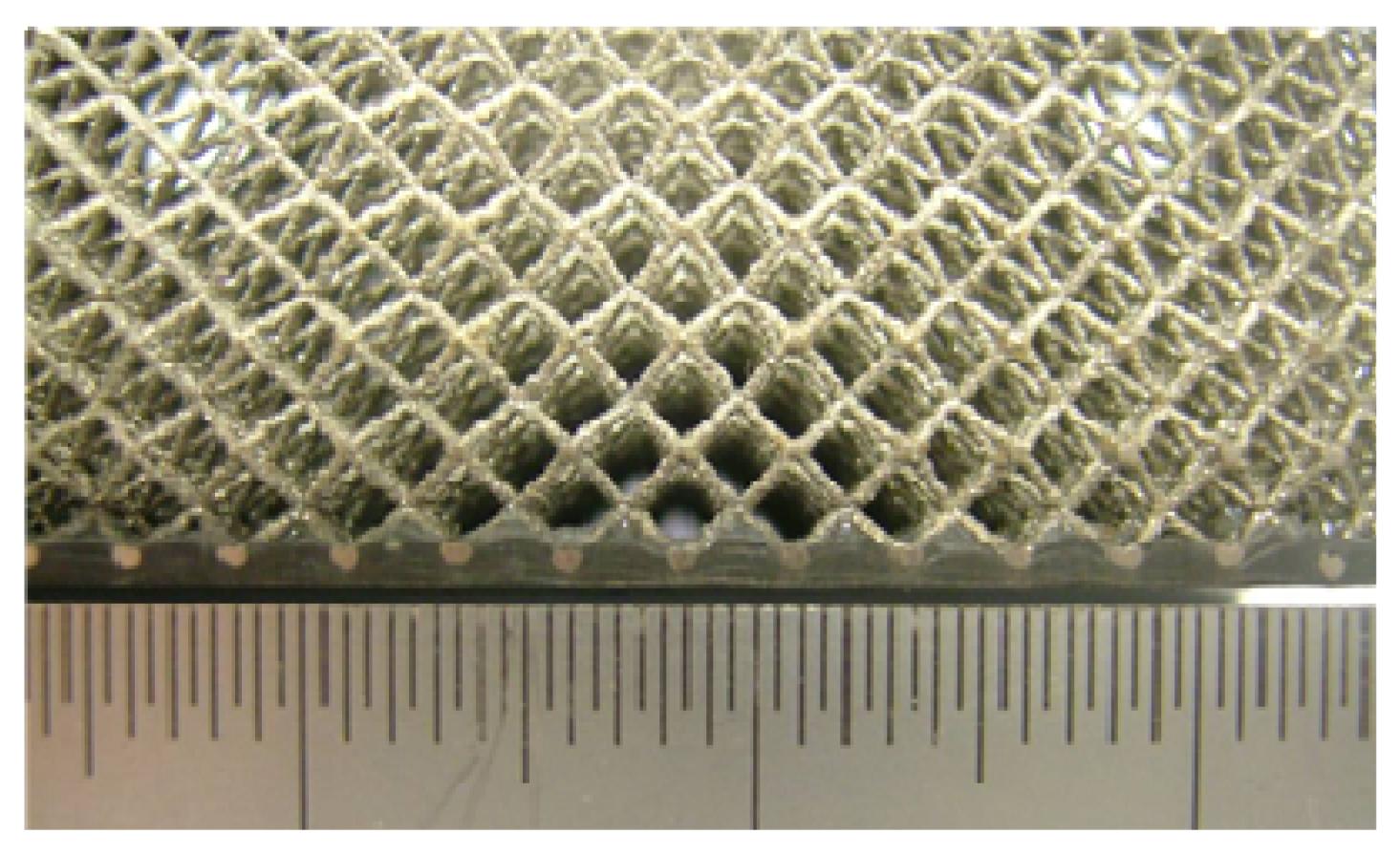 Fig.3
Core-skin interface showing the penetration of the lattice to a depth of approximately two composite plies

A typical load versus crosshead-displacement record obtained from a quasi-static MTPB test is shown in Fig. 4. Crack propagation was found unstable as highlighted in the figure. It can be seen from Fig. 4a that strands attached to the upper skin started to stretch in the beginning, and a shear band occurred at the fracture initiation with applied load increase, then crack propagation extended from the pre-crack resulting in a slight drop in load; afterwards, load steady increased causing skin bending and localized core crushing. An SEM photograph showed strand failures similar to those observed in the tensile tests. The initial fracture toughness G IC was used to characterize the delamination resistance of the lattice sandwich structure since crack propagation in the MTPB test involved tearing of the core but no strand extraction out of the skin. 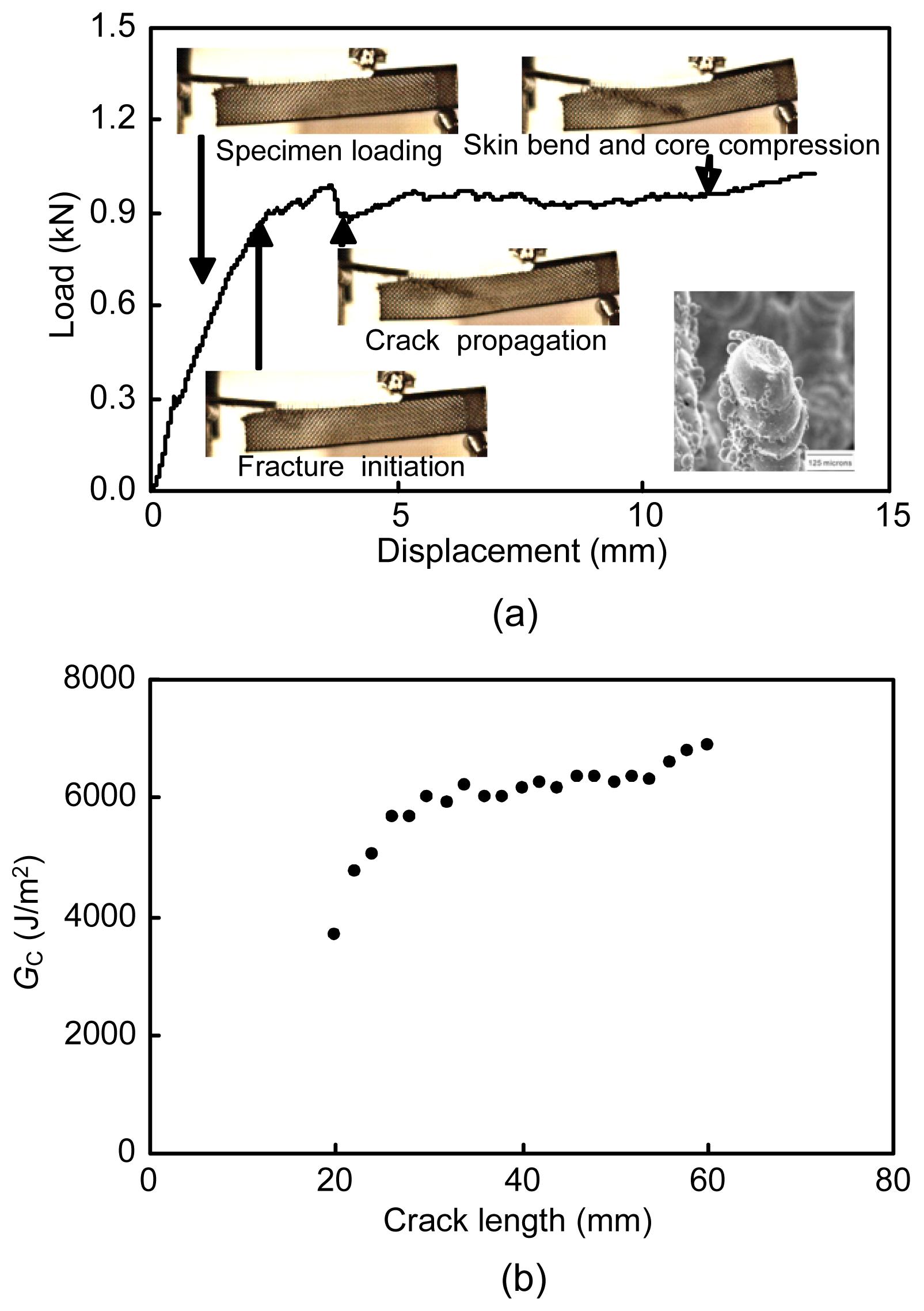 Fig.4
A typical load vs. displacement curve (a) and a typical G IC vs. crack length plots of MTPB test on a lattice sandwich beam at a loading rate of 4.2×10−6 m/s (b)
A series of drop-weight impact tests were carried out on the 316L lattice-based MTPB samples in order to characterize the dynamic fracture properties of the skin-core interface. Since it was not possible to characterize the skin-core delamination resistance during a test due to crack propagation through the core, the initial fracture toughness G C was used to characterize the delamination resistance of the lattice sandwich structures. Relatively high G IC values were obtained, which were approximately 5500 J/m2 at quasi-static rate, and 6500 J/m2 under a low velocity impact loading of 3 m/s. Fig. 5 suggests that G IC increased by approximately 15% from 8.4×10−6 m/s to 3 m/s. 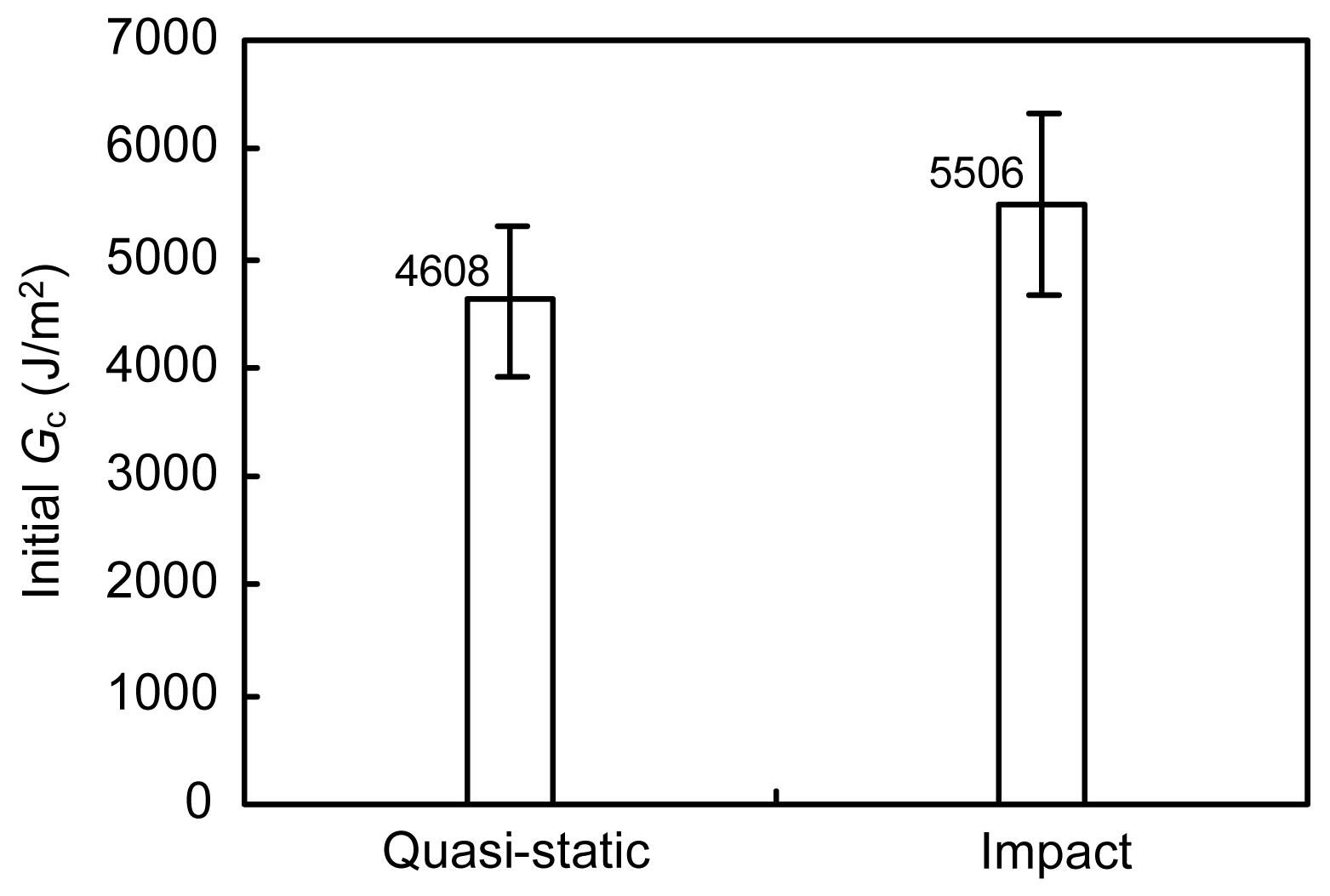 Typical quasi-static lattice sandwich beam load-displacement curves are shown in Fig. 6a with a peak load of approximately 1.1 kN and an initial stiffness of 1.77 kN/mm. No evidence of delamination was observed when the beams were subjected to quasi-static and impact loads under three-point bending (Fig. 6b). Fig.6
Three-point bend test on a lattice sandwich beam
(a) Loading rate of 4.2×10−6 m/s; (b) Side view of sandwich beam subjected to three-point bend loading
Previous work on sandwich beams based on a metal core has shown that such structures fail in a number of modes: face yielding, face wrinkling, core yielding, and indentation (Fig. 7) (Ashby et al., 2000). Similar failure modes were observed during this study, as shown in Fig. 7. Failure of the skin initiated at the initial peak load, which was followed by progressive crushing of the core. During indentation, localized crushing of the core occurred by plastic bending of the strands, which was similar to that observed in the compression tests. The indentation pressure on the foam core is only slightly higher than the uniaxial compressive strength. It can be seen in Fig. 7c that the loading crushes the lattice, bending the face sheet to accommodate the lattice core deformation. Two competing collapse mechanisms were identified in sandwich beams following three-point bending: Mode A and Mode B (Ashby et al., 2000). In collapse Mode A, the formation of plastic hinges happens at the loading point during the core shear. In collapse Mode B, the collapse mechanism is accompanied by the formation of plastic hinges at the mid-span and the support point. In this study, the lattice sandwich beam sheared in the collapse Mode B. Here, a cylinder indenter was used here and no mid-span plastic hinge was observed, only the existence of shearing at the outer supports was observed (Fig. 7d). This was caused by a transverse shear force in the core, and a plastic collapse by core shear can result.

Fig.7
Failure modes of sandwich beams based on 316L lattice core with a loading rate of 2 m/s
(a) Face yielding; (b) Face wrinkling; (c) Core yielding; (d) indentation
The energy-absorbing capacity of the sandwich structures was investigated by determining the energy under the load-displacement traces. Fig. 8 shows the variation of the absorbed energy with the impact energy, where it is evident that over 80% of the incident energy of the impactor is absorbed in failure processes within the sandwich structure. It is believed that much of this energy is absorbed by plastically deforming the struts under the point of impact, although some will clearly be dissipated in damaging and fracturing the skins. 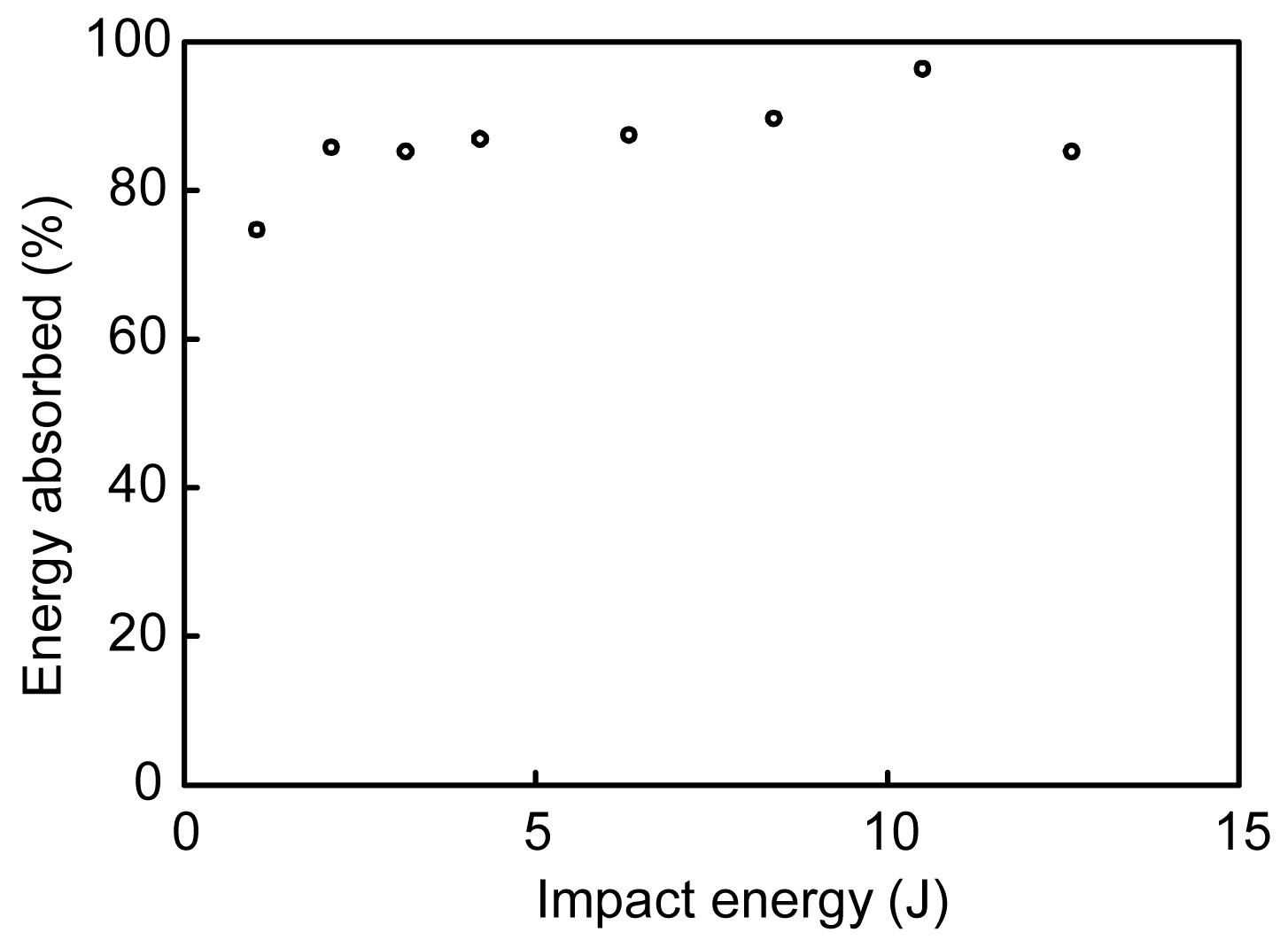 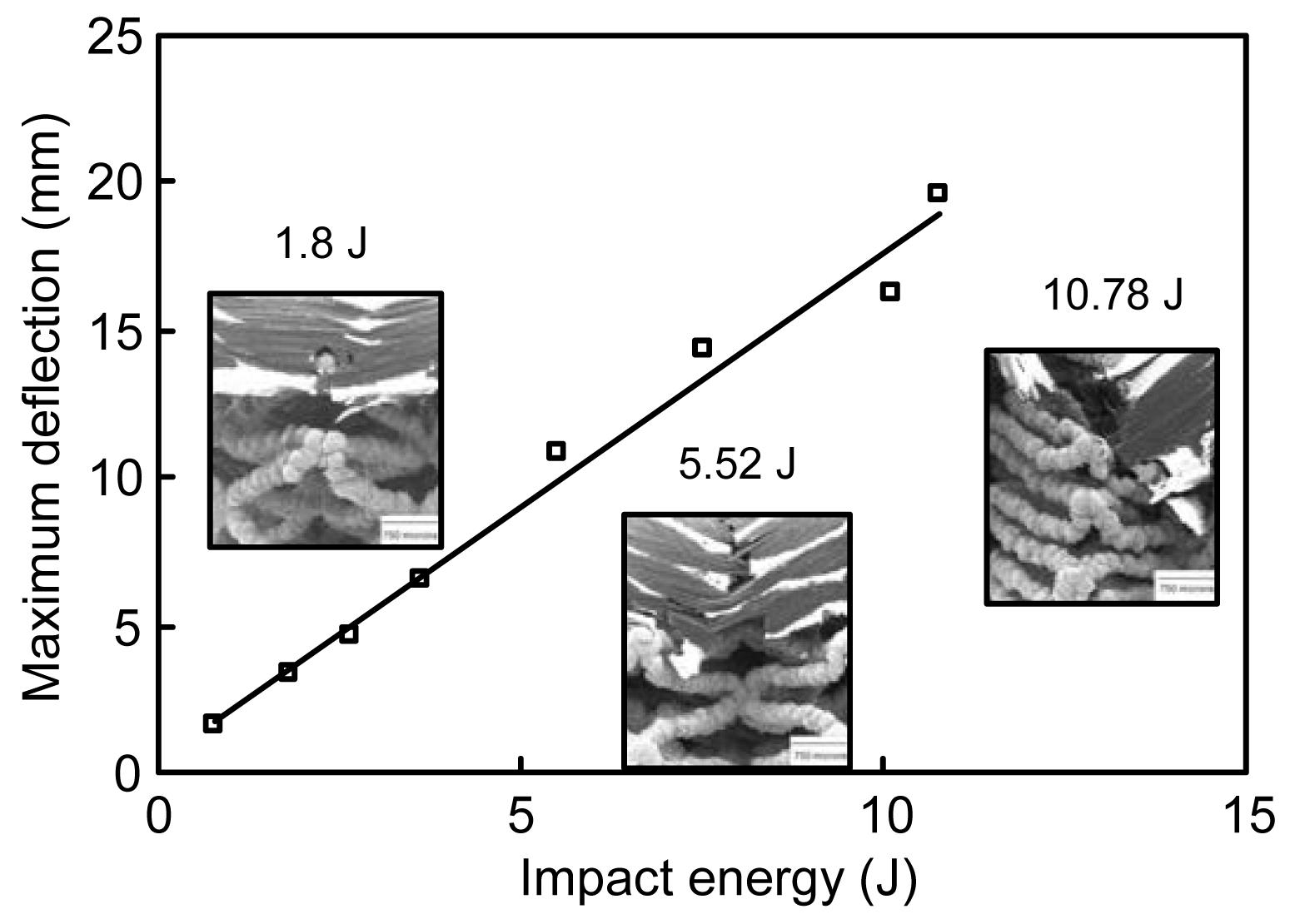 
*&nbspProject supported by the Engineering and Physical Sciences Research Council (EPSRC) (No. EPSRC EP/C009525/1) of China, and the China Postdoctoral Science Foundation (No. 2011M500625)