1. Seismic response study on a....2. Study on dynamic response of embedded....3. Comparison of various procedures for....4. Theoretical and experimental study on....5. Parametrically excited oscillation of....6. Design and experimental verification....7. Numerical model and multi-objective....8. Semi-active control of a cable-stayed....9. Optimum design of large span concrete....

Abstract: In recent years, local component destruction, collapse failure and the control of long-span cable-stayed bridges under strong multi-support excitations have received increasing attention. In this paper, two kinds of nonlinear finite element (FE) models are established to simulate the seismic responses and failure modes of a multi-span cable-stayed bridge scale model under multi-support excitations. One is the single girder model which is used to simulate the seismic response during four wave excitations. It can be concluded that the FE analysis results of the scale model are a good fit with those from the shaking table tests. The other one is the explicit dynamic FE model which is used to simulate the collapse and failure mechanisms of the scale model during strong earthquakes. The aggressive failure processes of the scale model under two different types of wave excitations were compared to reproduce the mechanisms in which the bearing at the middle tower failed under the El Centro (EC) wave (4.0 m/s2), and we also observed the connection failure of the cables and towers, and the elements failure of the upper beam in the middle tower, which occurred successively under a Jiangxin (JX) wave (4.0 m/s2). This simulation may be referenced as the basis for the collapse failure of a cable-stayed bridge with a large span during a strong earthquake.

The Wuhan Erqi Yangtze River Bridge, a three-tower and double-cable-plane cable-stayed bridge, was selected as the prototype bridge for a multi-span cable-stayed bridge. A 1:100 scale model with a 17.32 m length for the main girder and a 2.05 m height for the main towers was tested by using earthquake shaking tables (Fig. 1). The analytical modeling discussed in this study simulates the seismic response of the scale model during multi-support excitations up to failure. For a detailed description of the prototype bridge and scale model, please refer to the relevant study of ‘Part I: shaking table tests’ (Zong et al., 2014). Fig. 2 shows the scale model test setup. 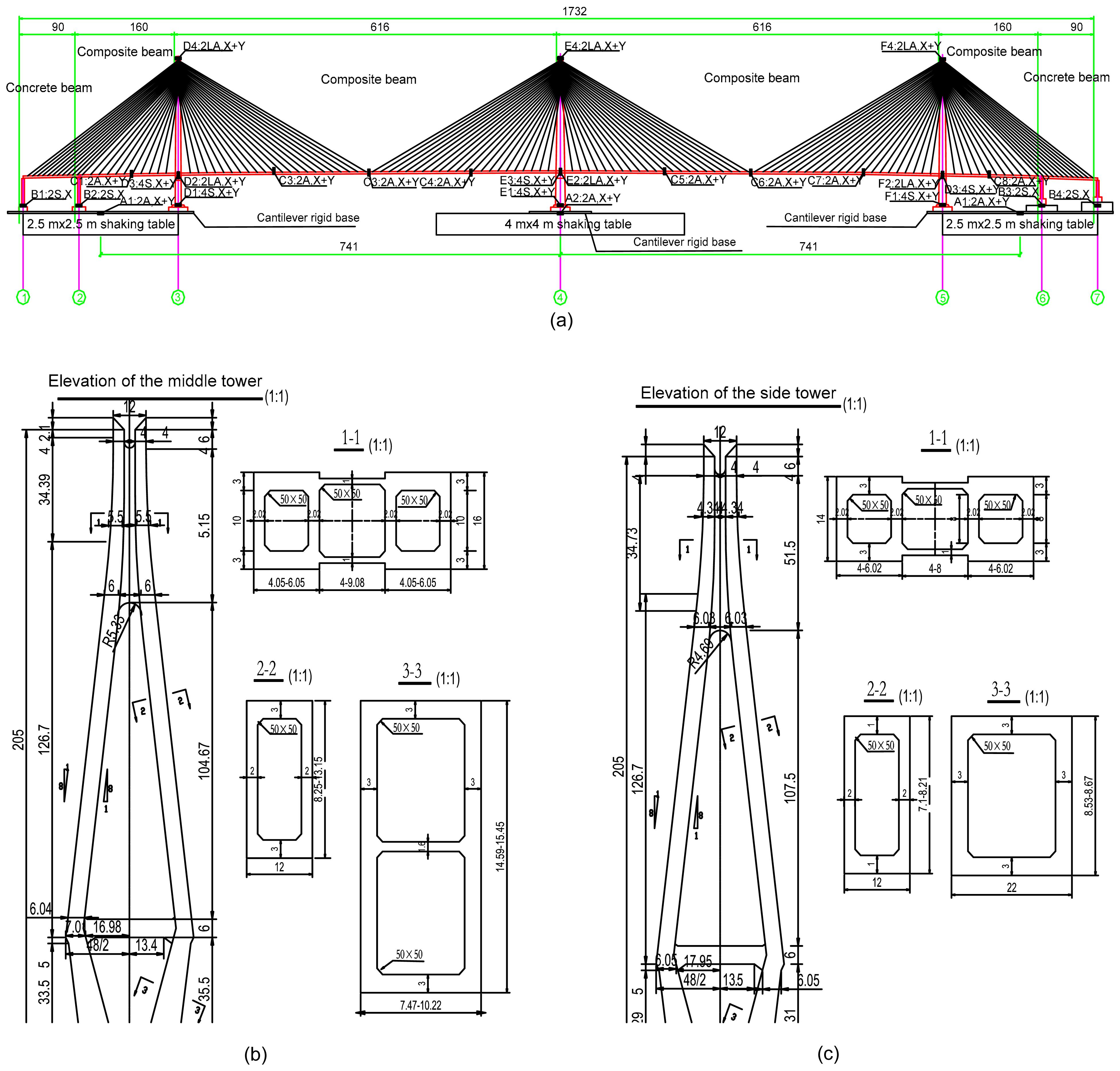 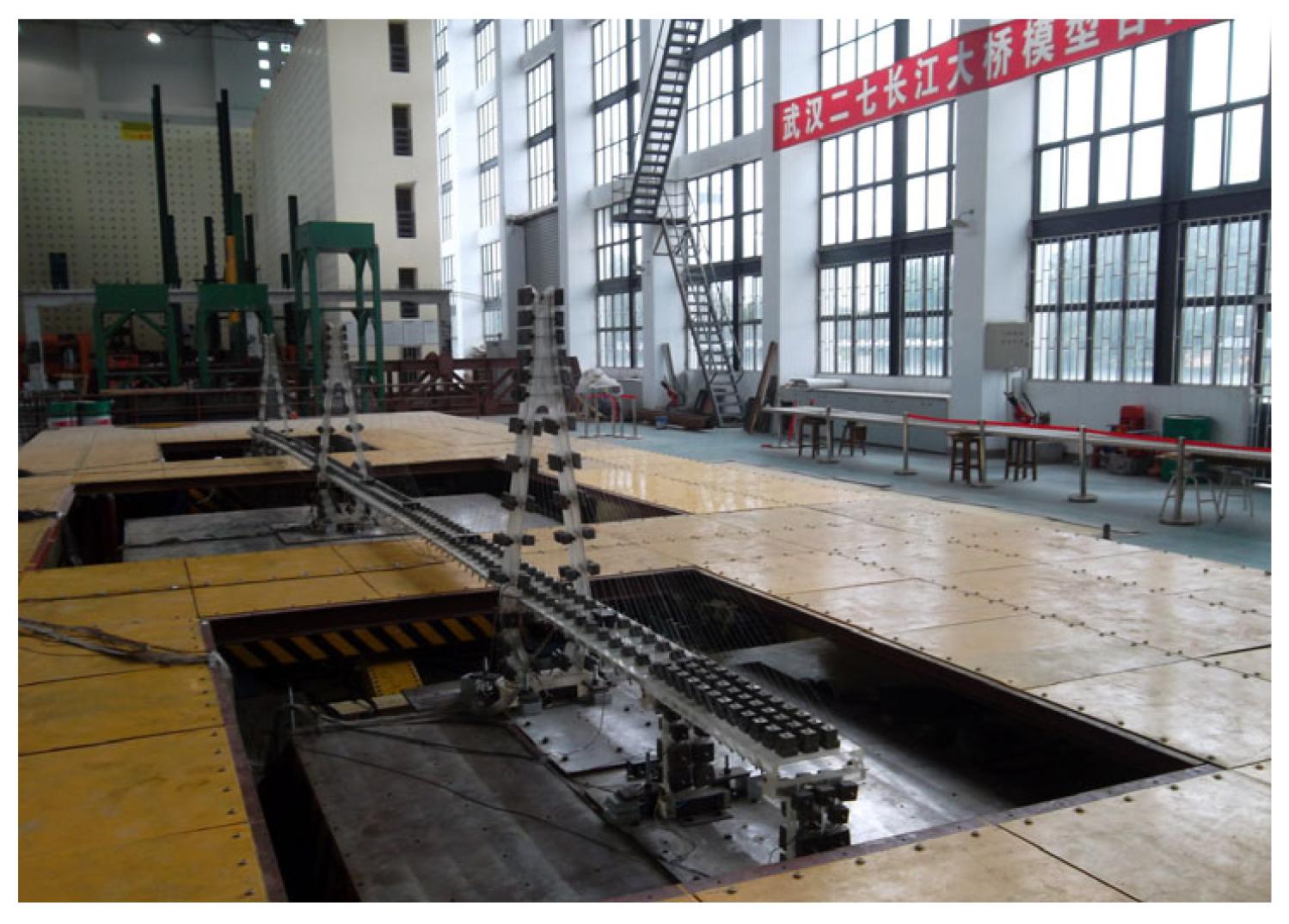 A 3D single girder FE model of the scale model was established based on ANSYS software (Nazmy and Abdel-Ghaffar, 1990a; 1990b; Wilson and Gravelle, 1991). Spatial beam-column elements (BEAM4) with six degrees of freedom at each node were adopted to model the main girder, cross beams, towers, and side piers. The truss elements (LINK10), having only tension stiffness, were used to model the cables. The main girder was modeled by using a single central spine with offset links to accommodate lumped masses and cable anchor points, and stiffness was assigned to the spine to simulate the actual stiffness of the main girder. The nonlinearity of the cables was accounted for by an equivalent tangent equation (Ernst, 1965; Nazmy and Abdel-Ghaffar, 1990a; 1990b). The supplemental masses were modeled by using the mass elements (MASS21) defined by a single node. The vertical bearings among the towers, side piers, and superstructure were modeled by using spring-damper elements (COMBIN14) defined by two nodes of a spring constant and damping coefficients, and the other connections among the towers, side piers, and superstructure were simulated by coupling the corresponding rotational and lateral degrees of freedom. The bottom of the towers and the side piers were completely fixed, ignoring the influence of the soil-pile-structure interactions. The single girder model of the scale model has 706 nodes and 1600 elements (Fig. 3). 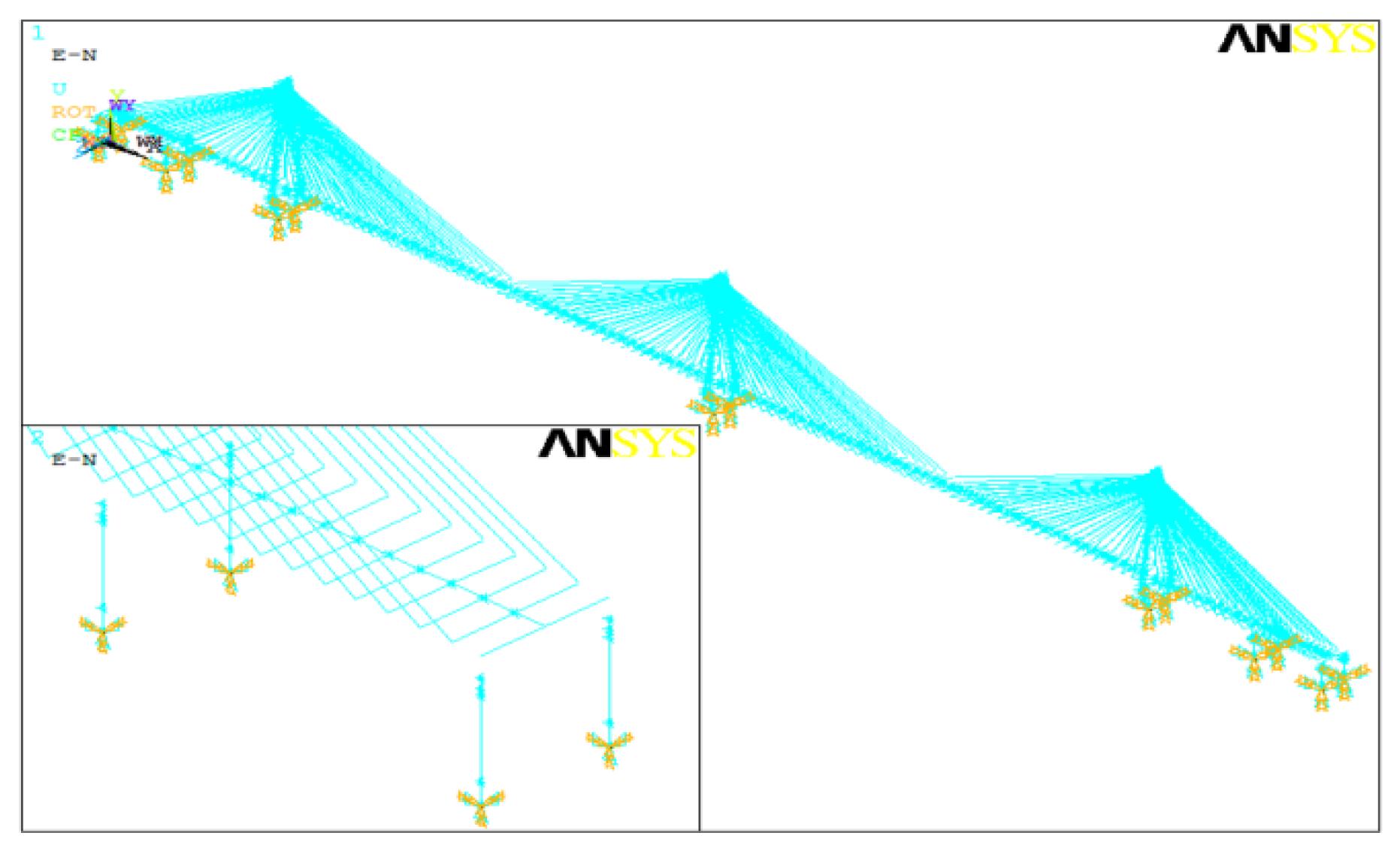 Fig.3
Spatial finite element model of the scale model
The first 15 natural modal frequencies and vibration modes of the scale model were calculated, as well as the partial measured frequencies from the shaking table tests were compared (Table 1). It can be seen that the measured frequencies of the scale model are consistent with those of the numerical calculation by the single girder model. These results indicate that the single girder model is accurate enough for studying the dynamic characteristics and the seismic responses of a long-span cable-stayed bridge, and for the requirements of related dynamic researches on full structures. However, the implicit FE model cannot directly simulate the whole failure process of long-span cable-stayed bridges to demonstrate the mechanisms of collapse and failure of the complex structures during a strong earthquake.

Summaries of first 15 modes of the bridge model

In recent years, dynamic disasters, collapse failures and their effect on long-span cable-stayed bridges under complex service environments, such as earthquakes, typhoons explosions, and collisions, have been receiving increasing attention with the rapid development of cable-stayed bridges around the world. Because the collapsing process of a cable-stayed bridge is noticeably discontinuous, large deformation, and highly nonlinear, traditional implicit FE methods are hard to simulate the collapse and failure mechanisms of the cable-stayed bridge during a strong earthquake. On the other hand, explicit dynamic algorithms are using a small time step to meet the convergence conditions and save the calculation costs by avoiding the stiffness matrix through inverse in the implicit integration algorithm. In this study, LS-DYNA, as one of the prominent explicit dynamic programs, was adopted to simulate the collapse and failure process of the multi-span cable-stayed bridge scale model during multi-support excitations (LSTC, 2006). The main girder, main towers, and central buckles were modeled by using spatial beam elements BEAM161 which included finite transverse shear strains. The cables were modeled by using elements LINK167 which allowed elastic cables to be realistically modeled. The vertical bearing among the towers, side piers, and the main girder were modeled by using elements COMBI165 which allowed us to model simple spring or damper systems, and the attached masses were modeled by using MASS166 elements which are defined by a single node with concentrated mass components. 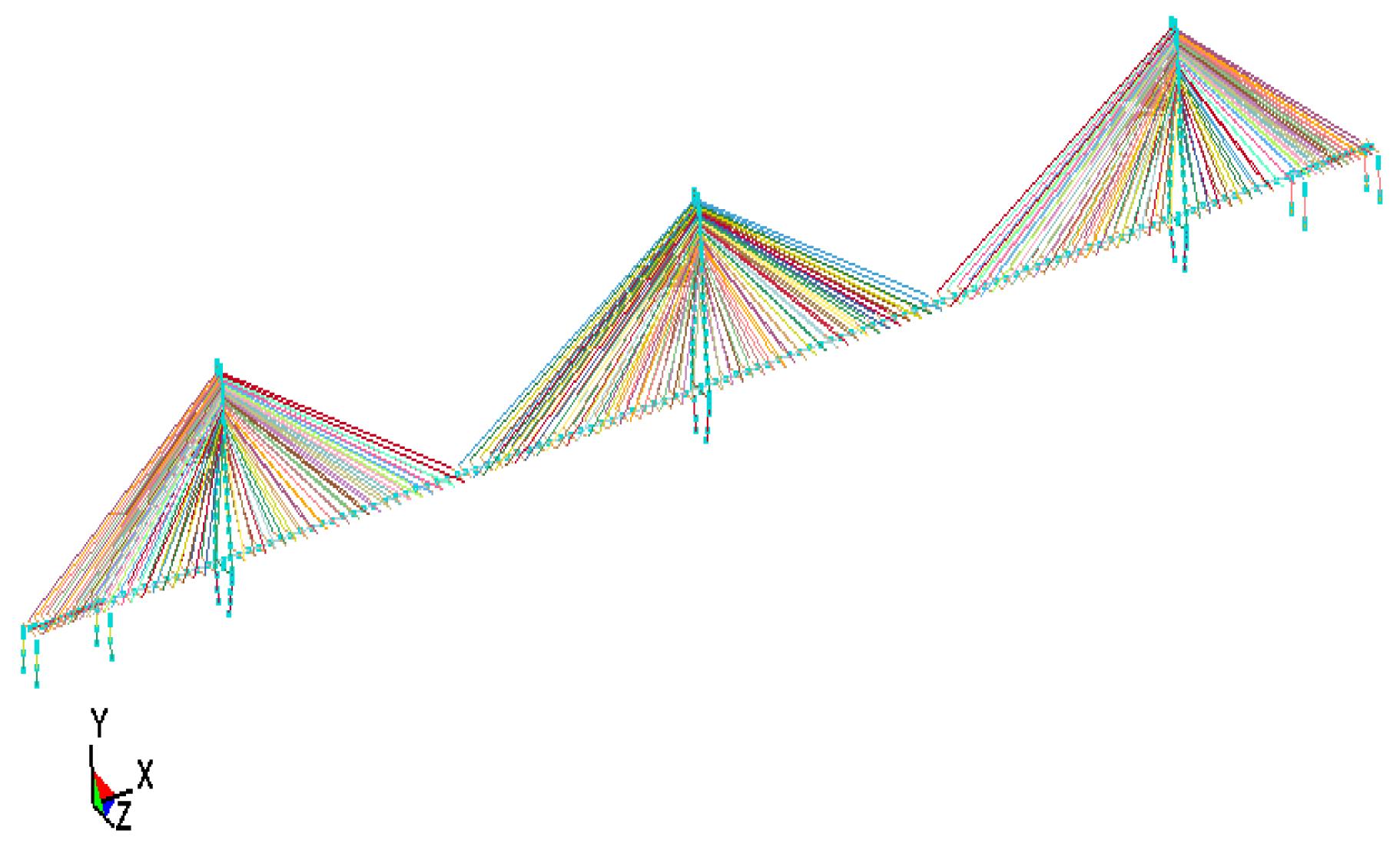 Three synthetic seismic waves with the length of time of 20.5 s including the Wuchang (WC) wave, Jiangxin (JX) wave, Hankou (HK) wave, and El Centro (EC) wave were selected as the input excitations described in the relevant study of ‘Part I: shaking table tests’ (Zong et al., 2014) (Fig. 5, p.411). Since only the acceleration and strain parameters were measured in the shaking table tests, the acceleration responses of the towers in the test and the FE analysis (FEA) were compared (Table 2). Table 2 indicates that the test results are in good agreement with the results from FEA, and most of the errors are less than 10% on the whole. The numerical simulation results are a little higher than those from the tests due to the simplified disposal of the deck in establishing the FE model and the errors of the equipment in the practical experimental measurement. The seismic responses of three towers are approximately symmetric under horizontal earthquake excitations.

Comparison of acceleration responses of the towers between test and FEA (unit: m/s2)
The time-history curves at the middle span of the main girder are described in Fig. 6 (p.412). It can be seen that the response tendencies of the FE analysis are consistent with those from the shaking table tests (Zong et al., 2014). The seismic responses in the vertical direction are larger than those in the transversal direction. From these comparisons, it can be concluded that the single girder FE model can be used to predict the seismic responses of the multi-span cable-stayed bridge during uniform excitations and non-uniform excitations. 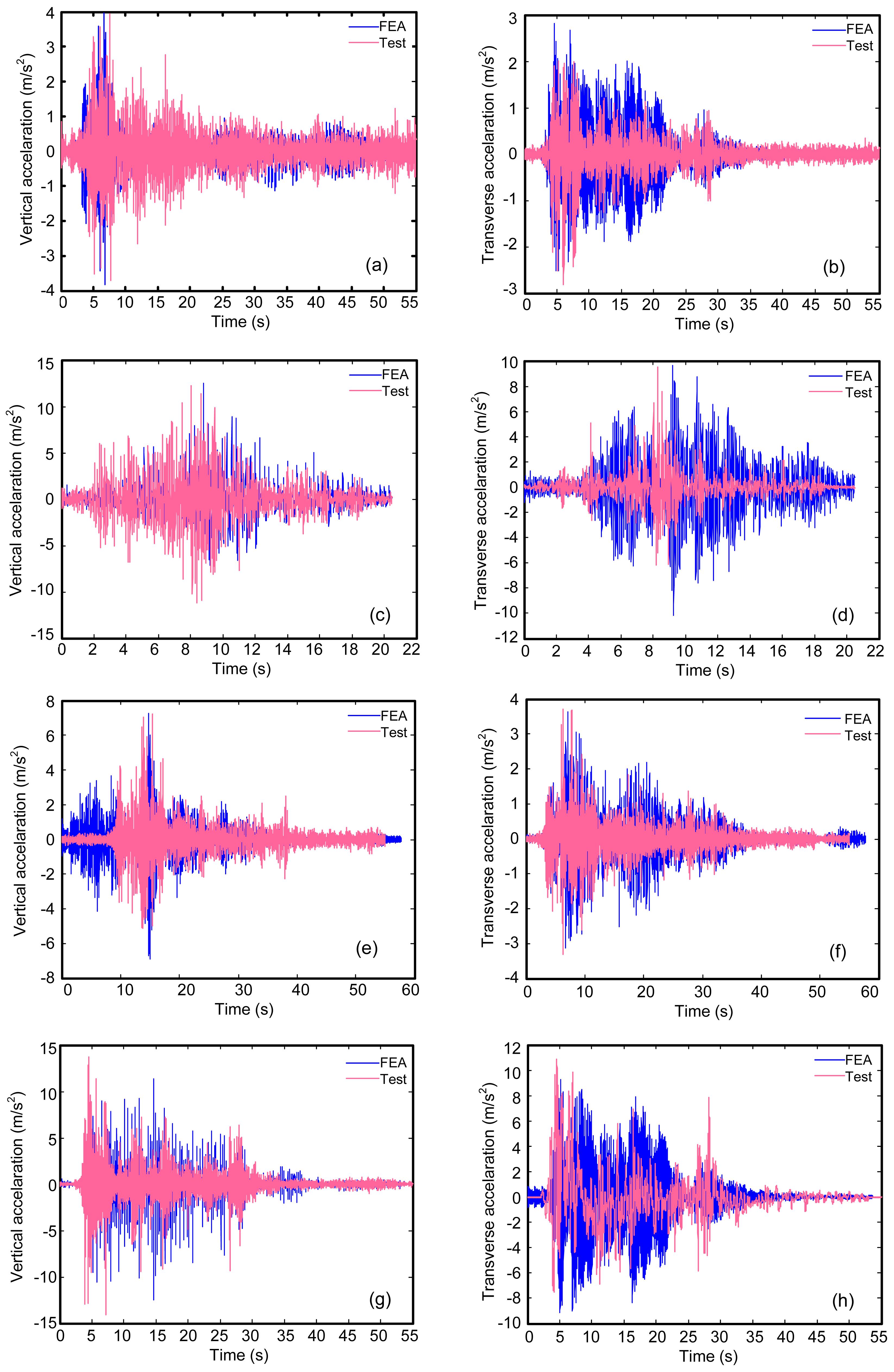 Since internal forces at the bottom of the tower vary widely for different structural systems of cable-stayed bridges, the bending moments of the tower and pier were analyzed for the scale model. The detailed bending moments under four uniform excitations are recorded (Table 4), and the ratios of the three towers as well as the time history curves at the bottom of the left tower under non-uniform excitations are described (Fig. 8).

The explicit dynamic model established in LS-DYNA was also an FE model, which was similar to the above single girder model in ANSYS without the modal validation. Due to space limitation, only part of the numerical simulation analysis about the collapse and failure mode of the scale model during only two different seismic excitations were reported and the corresponding discussions were given in this study. To explore the failure mode of the scale model during strong earthquakes and to demonstrate the collapse process of the components, two earthquake waves of the JX wave and EC wave with the acceleration peak value of 4.0 m/s2 were selected as the bi-direction input excitations in the numerical simulation. The time history curves of the two waves are described (Fig. 9). 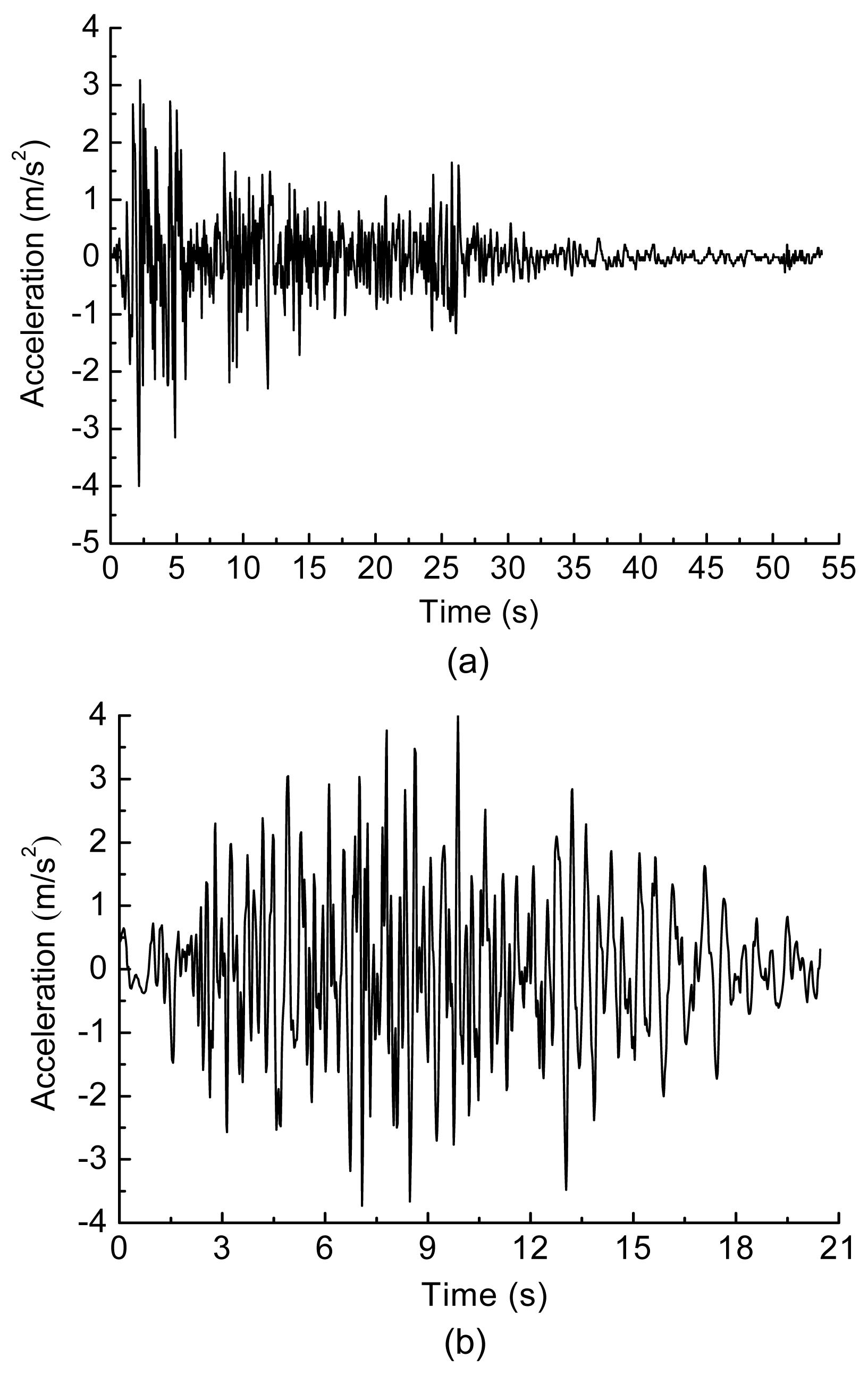 6.1.  Failure mode of the scale model under the EC wave

The whole process of the components failure of the scale model can be demonstrated in an animation form using the software of LS-PREPOST and the failure conditions at several key times during the EC wave excitation are displayed (Fig. 10). The failure process indicated that the slight vibrations of the cable can be visible at 2.2 s which was the moment for the EC wave with the peak value, at the same time, which can also arouse the small horizontal displacement of the towers. However, the vibration effect can be reduced when the earthquake was passing away. The vertical vibration of the main girder aggravated and the torsion phenomenon of the cables emerged at 53.7 s. During the whole action process, no obvious vibration of the towers occurred. The bearing springs of the middle tower were stretched sharply at 20.5 s, according to the profile chart, and the failure state of the bearing was assumed to occur at this time. This kind of phenomenon was consistent with the shaking table test results (Zong et al., 2014).

6.2.  Failure mode of the scale model under the JX wave 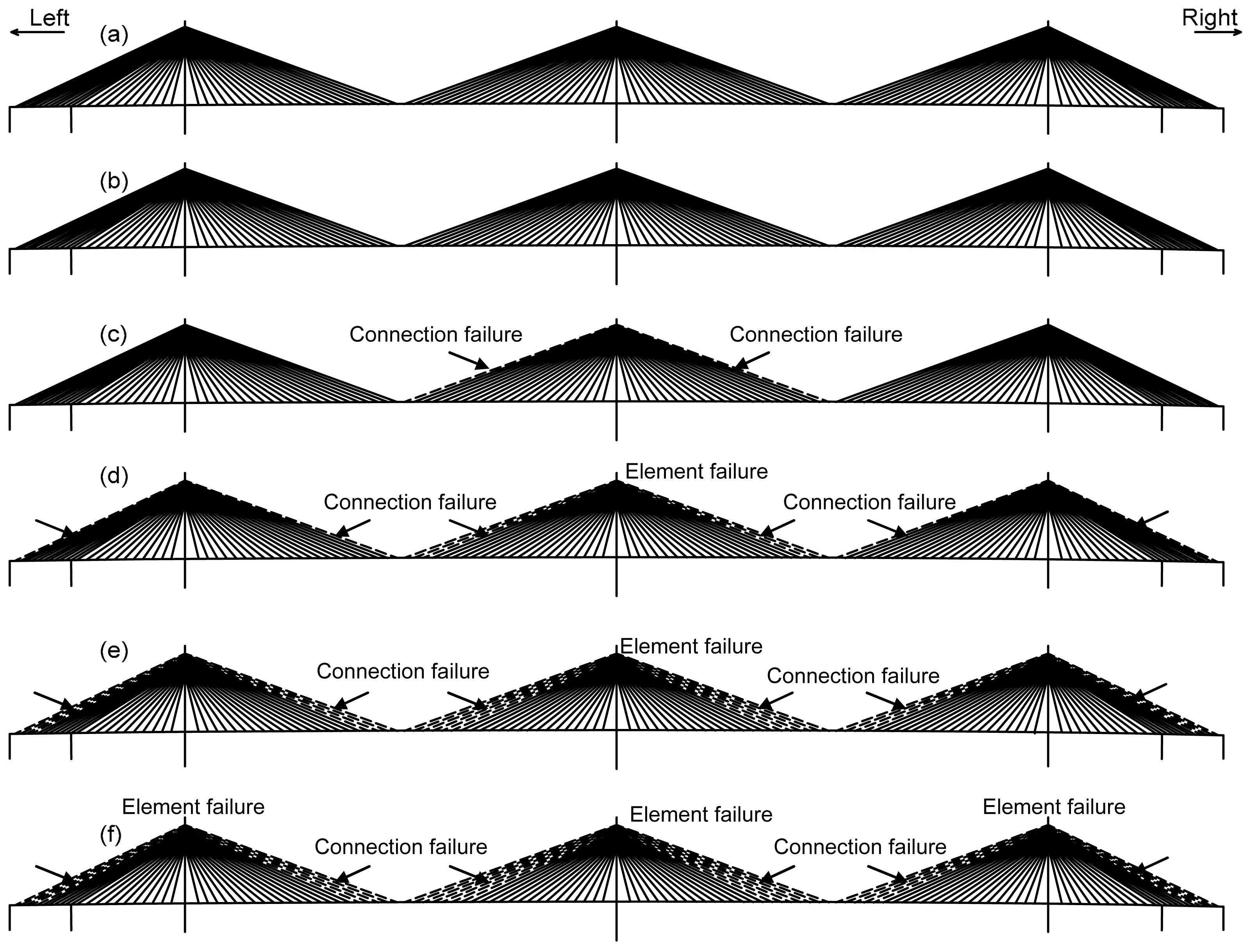 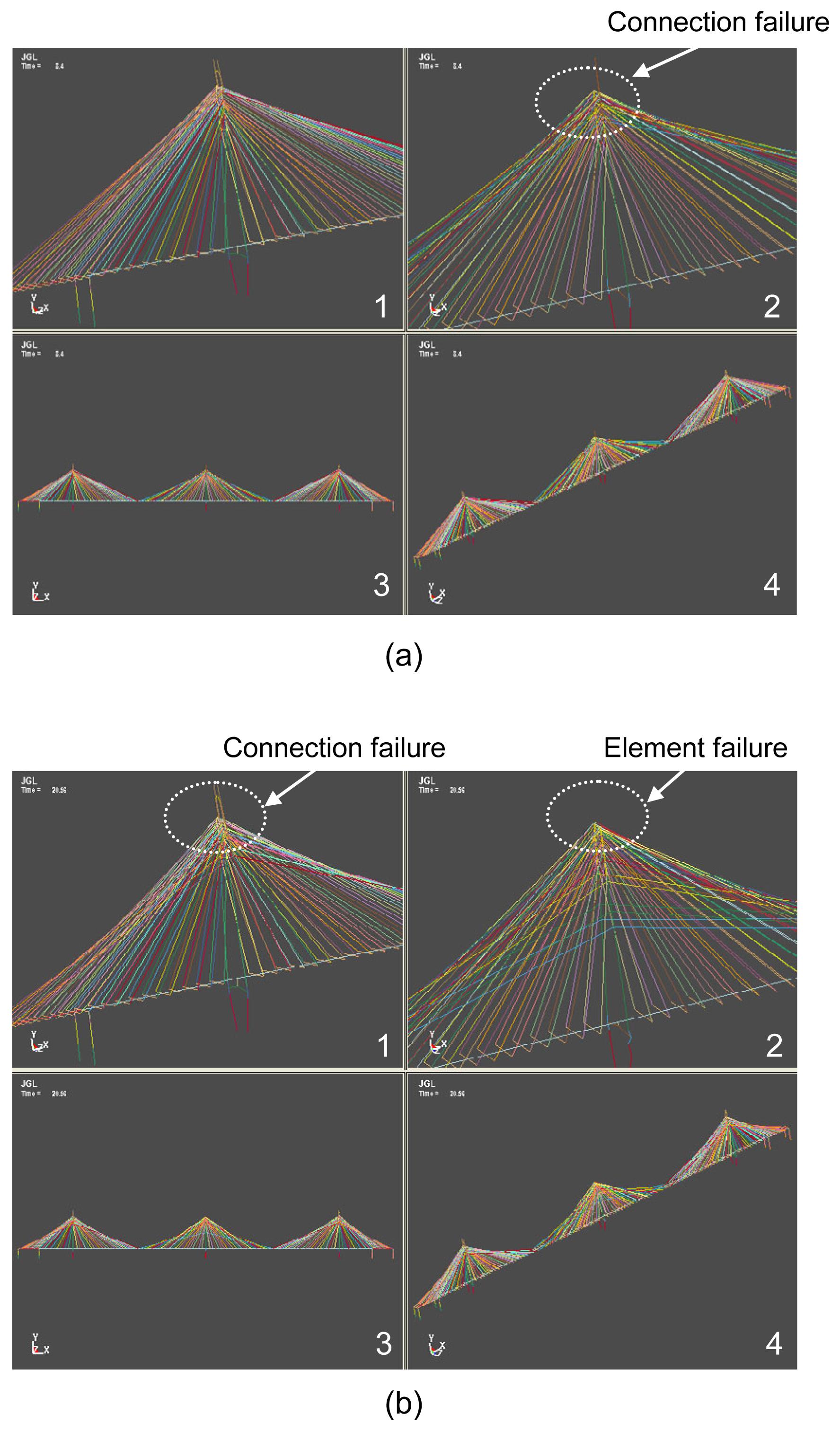 In this paper, seismic responses of a three-tower cable-stayed bridge scale model under multi-support excitations and failure modes during two strong earthquake actions were investigated by using two kinds of nonlinear finite element models, respectively. The main conclusions can be extracted from the simulation and listed as follows:


*&nbspProject supported by the National Natural Science Foundation of China (Nos. 51178101 and 51378112), the Doctoral Program Project of the Ministry of Education (No. 20110092110011), and the National Key Laboratory of Civil Engineering Disaster Prevention of Tongji University (No. SLDRCE08-HZ-02), China