Abstract: Aging is one of the contributing risk factors for kidney diseases. Accumulating evidence prompts the view that telomere length in kidney tissue cells is an indicator for organismal aging. Previously identified aging markers (cathelin-related antimicrobial peptide (CRAMP), stathmin, elongation factor-1α (EF-1α), and chitinase) were associated not only with telomere driven aging in mice but also with human aging and chronic diseases. This study focuses on the relationship between these biomarkers and igA nephropathy (IgAN) progression in the Chinese population. For 260 individuals, the four markers are determined in blind datasets using direct enzyme-linked immunosorbent assay (ELISA) and immunofluorescence staining. The expression levels of CRAMP and chitinase increased in blood plasma, urine, and kidney tissues during human IgAN progression. And for the other nephropathy, such as systemic lupus erythematosus (SLE), diabetic nephropathy (DN), and focal segmental glomerulosclerosis (FSGS), there is no protein upregulation with telomere shortening. Moreover, a combination of CRAMP and chitinase can distinguish patients with IgAN from healthy individuals with 88.2%/92.5% (plasma) and 74.3%/84.2% (urine) sensitivity/specificity. These data provide the experimental evidence that telomere shortening and related inflammatory proteins are associated with human IgAN, and it could be a new direction for the disease progression study.

IgA nephropathy (IgAN), characterized by immunoglobulin A depositing in the glomeruli (Berger and Hinglais, 1968; Woodroffe et al., 1980; Lee et al., 1982), is one of the major causes leading to renal failure (Cagnoli et al., 1985; Imai et al., 1985; Coppo et al., 1986). In humans, telomere shortening takes place in many tissues with age, and is accelerated in chronic diseases (Jiang et al., 2007). However, the contributing role of telomere dysfunction in human kidney disease was still unclear. Telomere length shortened during renal aging, especially in the cortex (Melk et al., 2000). By activating the DNA damage responses, the telomere defect restricts the proliferative capacity of human cells, inducing senescence or apoptosis instead. Aging kidneys are significantly affected by the structural and functional changes, which leads to the reduction in glomerular filtration rate (GFR), a decline in renal hemodynamic and functional reserves, decreased sodium excretion and potassium clearance, diminished urinary concentration and diluting ability, susceptibility to drug toxicity, impaired endocrine function, and so on. Aging, being a complex process, involves a series of cross-linking molecular pathways. Understanding the molecular mechanism of the physiological or pathological aging process of kidneys could shed light on the clinical approaches to slow down renal aging and treat nephropathy. Several aging markers have been identified in renal aging (Halloran and Melk, 2001; Melk et al., 2004). For convenient clinical use, more relevant biomarkers need to be detected not only in kidney tissue but also in urine and blood.

Previously, we have found that four proteins [cathelin-related antimicrobial peptide (CRAMP), stathmin, elongation factor-1α (EF-1α), and chitinase] were upregulated in telomere-dysfunctional mice. In geriatric population with aging-associated disorders and chronic diseases such as myelodysplastic syndrome (MDS) and liver cirrhosis, these proteins are positively regulated. However, there have been no reports on the relationship between the accumulation of these markers and the progression of IgAN. To further evaluate the conception that telomere attrition and aging process are interconnected to provoke human aging and disease, we investigated the association between these telomere shortening related markers and chronic kidney disease, IgAN, and we assessed the prognostic value of these markers for the progression of nephropathy in the renal biopsy, urine, and blood.

Demographic and clinical data of the study cohorts

The MicroWell plates (Nunc) were coated with the standard protein [CRAMP 100, 50, 25, 12.5, 6.25, 3.125, 1.6 and 0 ng, and 100 μl plasma (two-fold dilution)], and then incubated overnight at 4 °C. After three washes with phosphate buffered saline with Tween 20 (PBST), the plates were incubated with the first antibody [CRAMP (Cell Signaling) 1:100 (v/v), EF-1α (Upstate) 1:1000 (v/v), and stathmin (Cell Signaling Technology) 1:1000 (v/v)] for 2 h at ambient temperature or overnight at 4 °C, and then washed three times with PBST again. Horseradish peroxidase (HRP)-hapten conjugate secondary antibody 100 μl per well was applied, and the plates were incubated at room temperature for 60 min and washed five times with PBST. Then 0.1 ml of tetramethylbenzidine peroxide-based substrate solution was added to every well. The color reaction was developed for 30 min, and then stopped with the addition of 50 μl/well of 2 mol/L H2SO4 stop solution. The plate was read in the microplate reader in dual-wavelength mode (450–540 nm). The human CRAMP ELISA kit (HK321) we used is from Cell Sciences.

We analyzed chitinase activity with a chitinase assay kit (CS1030) purchased from Sigma. A 3-μl mixture of plasma and substrate solution (4-methylumbelliferone) was applied for each reaction. The enzyme activity was determined by using fluorimetry at an excitation wavelength of 360 nm and an emission wavelength of 450 nm. All samples were analyzed in triplicate.

The expression of CRAMP was detected by immunofluorescence staining on 4-μm thick paraffin sections of kidney. After deparaffinization and rehydration, the sections were permeabilized in 1 mmol/L sodium citrate buffer for antigen retrieval. Primary antibody, CRAMP (1:100 (v/v) dilution; Cell Signaling), was applied for 2 h at room temperature or 4 °C overnight. The secondary antibody we used was anti-mouse Cy3-Zymed (1:200 (v/v)).

We used MedCalc software package (MedCalc for Windows 8.1.1.0), SPSS 16.0, and GraphPad Prism to perform statistical analysis. Normal distribution of the data was evaluated by the one-sample Kolmogorov-Smirnov test. Average values were presented with mean±standard deviation (SD) or median as appropriate. P values were generated by the unpaired Student’s t-test for all of the datasets. 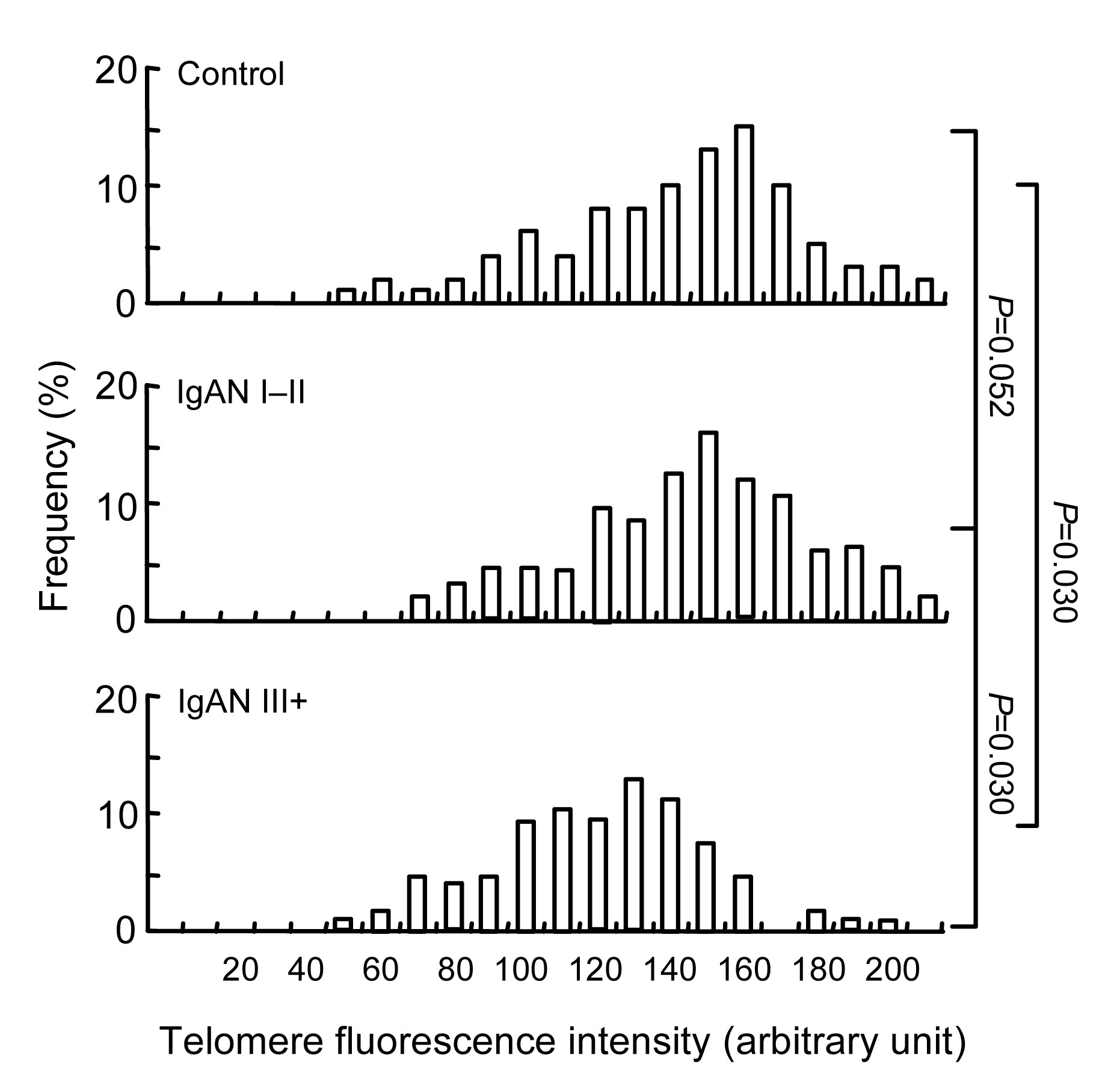 Fig.1
Distribution of telomere length (telomere fluorescence intensity) in kidney cells from the healthy controls, IgAN I–II and IgAN III+ patients
Bars to the left side of the vertical line represent cells with critically short telomeres; the percentage of such cells is indicated

ELISA is used to detect plasma samples and urine samples from all subjects, and internal standards are applied to normalize the data. In blood plasma, the expression level of CRAMP (P<0.0001; Fig. 2a) and the level of chitinase activity (P=0.0001; Fig. 2b) are higher in the patients with IgAN I–II than in the controls, whereas the differences in EF-1α and stathmin expression levels are not significant between these two groups. There is a further increase in plasma levels of CRAMP (P=0.0028) and chitinase activity (P<0.0001) in the patients with IgAN III+ compared with the IgAN I–II group. Multivariate analysis indicated that the expression level of CRAMP (A) and chitinase activity (B) have the best discriminatory power (combination score=0.434A+0.009B; Table