1. Parameters optimization of a....2. Effect of culturing conditions on the....3. EDVAM: a 3D eye-tracking dataset for....4. Charlson comorbidity index helps....5. Clinical analysis of pharyngeal....6. Theory and techniques for....7. An efficient method for tracing....8. A probiotic treatment containing....9. Adenovirus-mediated wild-type p53....

Abstract: This study proposed a quenching protocol for metabolite analysis of Lactobacillus delbrueckii subsp. bulgaricus. Microbial cells were quenched with 60% methanol/water, 80% methanol/glycerol, or 80% methanol/water. The effect of the quenching process was assessed by the optical density (OD)-based method, flow cytometry, and gas chromatography-mass spectrometry (GC-MS). The principal component analysis (PCA) and orthogonal partial least squares-discriminant analysis (OPLS-DA) were employed for metabolite identification. The results indicated that quenching with 80% methanol/water solution led to less damage to the L. bulgaricus cells, characterized by the lower relative fraction of prodium iodide (PI)-labeled cells and the higher OD recovery ratio. Through GC-MS analysis, higher levels of intracellular metabolites (including focal glutamic acid, aspartic acid, alanine, and AMP) and a lower leakage rate were detected in the sample quenched with 80% methanol/water compared with the others. In conclusion, we suggested a higher concentration of cold methanol quenching for L. bulgaricus metabolomics due to its decreasing metabolite leakage.

L. bulgaricus metabolomics requires efficient and reliable quenching and extracting methods. Cold methanol-water quenching was considered as a general procedure to rapidly inactivate bacteria metabolism, which has been widely applied to Escherichia coli, Staphylococcus aureus, and yeast (Castrillo et al., 2003; Jana et al., 2009; Meyer et al., 2010). The effect of methanol quenching on the leakage of intracellular metabolites has been widely studied. Wittmann et al. (2004) showed that a lower concentration of methanol quenching significantly reduced the leakage of metabolites in Corynebacterium glutamicum. However, Canelas et al. (2008) proposed that the intracellular components of Saccharomyces cerevisiae could be effectively protected by quenching in 80% methanol. Link et al. (2008) observed that methanol-glycerol quenching fluid showed lower leakage compared to methanol-water quenching fluid. In addition, many studies focused on the effect of quenching on the cell membrane integrity. Schädel et al. (2011) used an optical density (OD)-based method and flow cytometry to investigate the cell damage in E. coli during quenching. However, few studies reported on the quenching method for lactobacillus metabolomics analysis.

This study aimed to examine different quenching solutions for the investigation of the L. bulgaricus metabolomics. The optimized quenching processing for L. bulgaricus would be applicable for other lactobacillus.

L. bulgaricus ATCC 11842 was obtained from the American Type Culture Collection. The bacteria were cultivated in a 3.7-L laboratory fermenter (Bio-Rad, Switzerland) at 37 °C, 200 r/min, and pH 6.2±0.2 until the cells reached the stationary phase. The chemically defined medium was prepared in accordance with Otto et al. (1983).

The bacteria cells of L. bulgaricus were collected by centrifugation at 7000g for 5 min at 4 °C. Subsequently, re-suspended cells were washed twice with 0.9% saline solution at 4 °C. The samples were then quenched with 5 ml of three different methanol liquids respectively, followed by being vortex-mixed and centrifuged at 10 000g for 5 min at −20 °C.

The supernatants were removed quickly and used as extracellular samples for analyzing the leakage of intracellular metabolites. Simultaneously, the quenched bacteria cells were extracted by 2 ml boiling ethanol/water (3:1, v/v) solution (95 °C) according to Faijes et al. (2007). After that, the preparations were centrifugated (10 000g, 5 min, −20 °C), and the supernatant was frozen at −80 °C and used as an intracellular sample for analyzing the metabolite levels in L. bulgaricus.

OD recovery ratio was used to quantify the whole cell damage (Schädel et al., 2011), which was calculated as the OD value at 660 nm (OD660) of untreated sample/OD660 of treated sample). Briefly, the OD660 values of untreated samples were first monitored using a spectrophotometer (Beckman Coulter, Germany). Subsequently, the quenched cell pellets were re-suspended in 4 ml phosphate buffered saline (PBS), which allowed for detecting the decrease of OD660 of the cell suspensions.

Metabolites extracted from the L. bulgaricus were tested by GC-MS analysis. Firstly, 10 μl of 13C6-leucine (20 μg/ml) was added into each of the 200 μl re-dissolved samples. Then, the solution was mixed for 5 s and dried under nitrogen gas at 50 °C for 30 min. Subsequently, the sample was transferred to a GC vial and 30 μl of 20 mg/ml methoxy amine pyridine hydrochloride was added, mixed for 30 s and oxidated at 37 °C for 90 min. N,O-bis(trimethylsily) trifluoractamide (BSTFA) of a volume of 30 μl containing 1% (v/v) trimethylchlorosilane (TMCS) was added to each vial and the mixture was incubated for 30 min at 70 °C. Ultimately, a devitalized sample was kept at room temperature for 30 min.

After GC-MS analysis, statistical preprocessing was performed using XCMS software () under an R platform and later edited in Microsoft Excel 2010. Impurity peaks produced from sample preparation and column bleeding were wiped out, and all results containing variables, peak-area, and observables are organized into a 2D matrix. The preprocessed GC-MS data were then imported into Simca-P software (Version 11.0) and principal component analysis (PCA) and orthogonal partial least squares-discriminant analysis (OPLS-DA) were executed. PCA was used to differentiate the samples. OPLS-DA analysis was used to filter the quadrature signal. The efficiencies of the models were determined by values of R 2 and Q 2. In addition, permutation tests were performed to test the validity of the OPLS-DA models. Statistical significance was evaluated using the t-test and P<0.1 was considered significant.

The PI dye can bind to nucleic acids inside the cells and then form a red fluorescent signal, which can be detected by flow cytometry (Díaz et al., 2010). Thus, the PI-staining method was applied to examine the degree of damage to the cells after the aqueous methanol quenching.

Because PI is a membrane impermeant dye, the cell without treating and quenching had relatively intact membranes and exhibited a 3% PI labeling (Figs. 1 and 2). The variation of the composition of methanol solutions changed the ratio of PI-labeled cells. Compared with the 60% Meth quenching, the 80% Meth quenching caused less damage to the L. bulgaricus cells. In addition, the 80% Meth/gly effectively protected the cell membranes and reduced the ratio of PI labeling to 6.6%, which was significantly less than that in the Meth quenching (P<0.05). 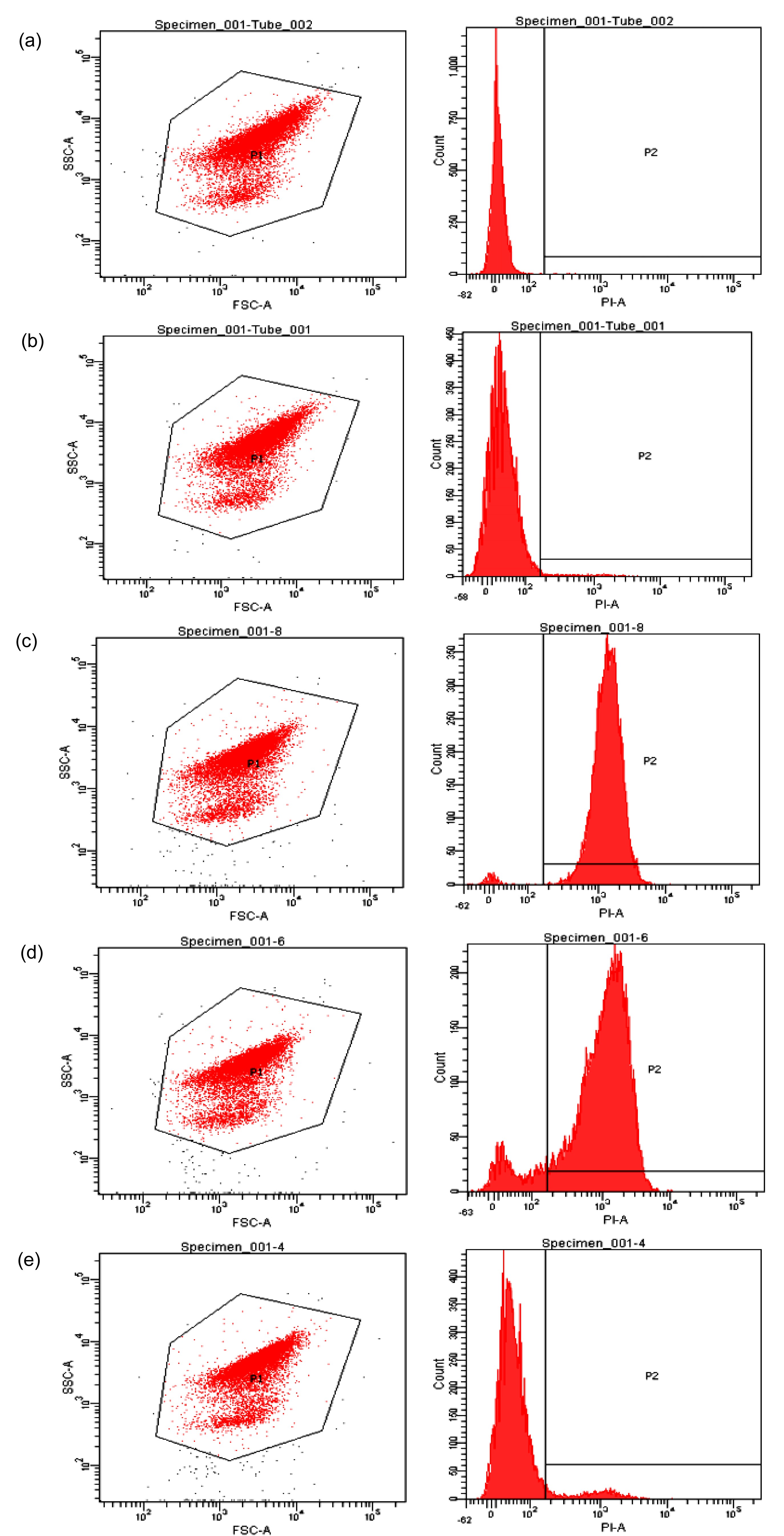 Fig.1
Flow cytometry diagrams for evaluation of the cell membrane integrity
Unquenched samples without (a) and with (b) PI staining. Quenched samples by 60% Meth (c), 80% Meth (d), and 80% Meth/gly (e)

We further analyzed the total cell rupture by monitoring the reduction of OD660 in the quenching samples (Fig. 3). It was found that the OD660 recovery ratio of the cold 80% Meth/gly was higher than those of other quenching methods, which indicated that Meth/gly had a positive effect on preventing the L. bulgaricus cell lyses.

The results of GC-MS showed that there was a strong signal with good sensitivity and reproducibility in the GC-MS total ion chromatograms (TICs) of all samples. However, other peak areas of the 80% Meth/gly chromatogram were covered due to a saturated peak glycerol present at 8.55 min of retention time (Fig. 4b). It respectively found 807, 603, and 841 substances in the GC/MS TICs of 60% Meth, 80% Meth/gly, and 80% Meth samples, including ATP and its derivatives, amino acids, organic acids, sugars, and fatty acids (Fig. 4). 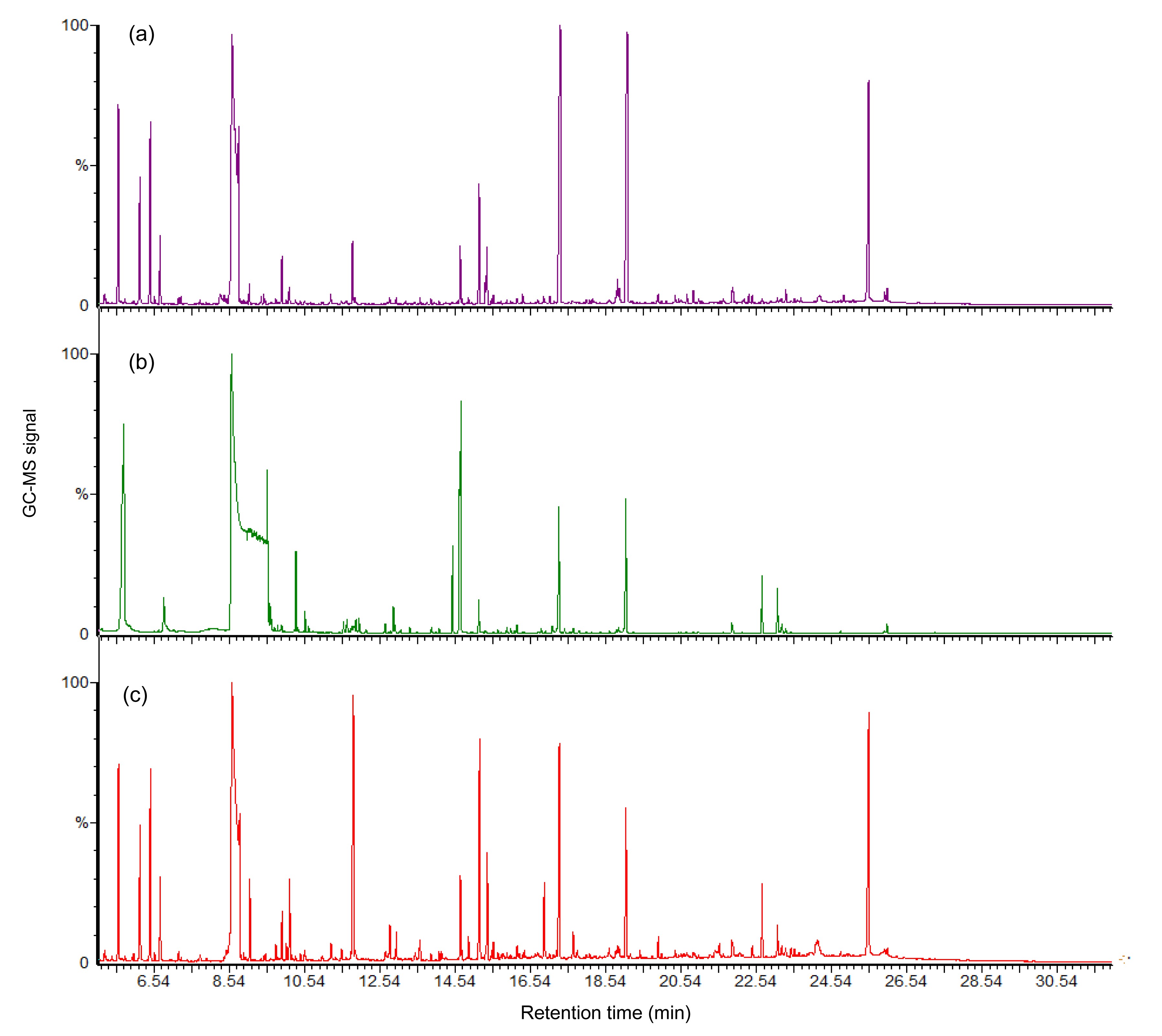 Fig.4
GC-MS total ion chromatograms (TICs) of intracellular metabolite profiles of L. bulgaricus from three methanol quenching groups: (a) 60% Meth; (b) 80% Meth/gly; (c) 80% Meth
The PCA score plot showed that the samples prepared by different methanols were clearly separated, although 80% Meth/gly and 80% Meth were grouped closely (Fig. 5a). Detailed insight into the differences can be identified by examining the PCA loading plot (Fig. 5b). The major compounds that contributed to the discrimination of 60% Meth samples were palmitic acid and stearic acid. Moreover, focal glutamic acid, aspartic acid, alanine, and AMP were the metabolites which contributed to the separation of the 80% Meth samples from others. It is suggested that the 80% Meth quenching method was superior to quenching with 60% Meth and 80% Meth/gly, because larger amounts of metabolites were detected. 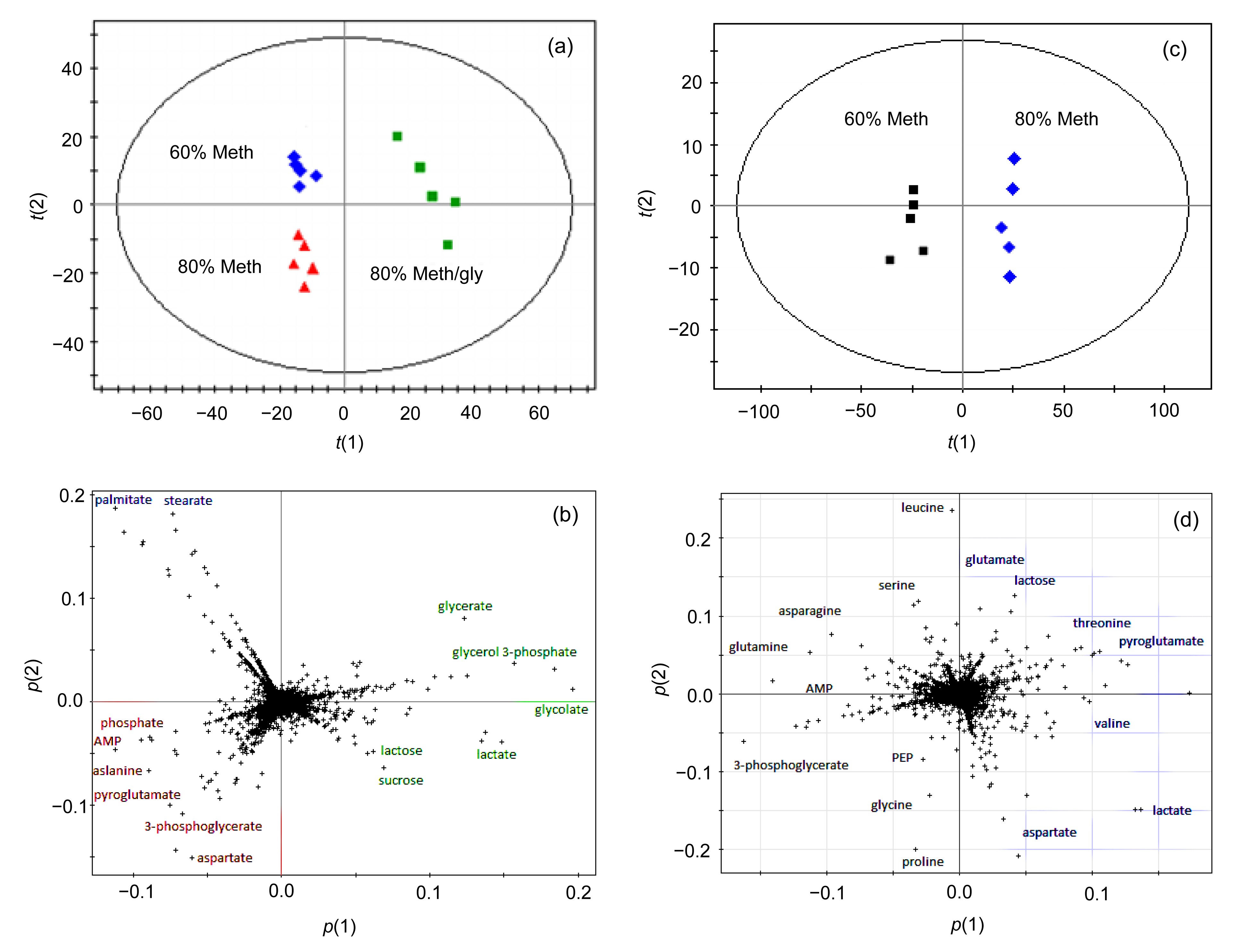 Since L. bulgaricus cells were sensitive to methanol quenching procedures so as to lose their intracellular metabolites, the concentrations of extracellular (supernatant) metabolite were also measured by GC-MS.

3.5.  Impact of quenching protocols on the metabolitic profiles 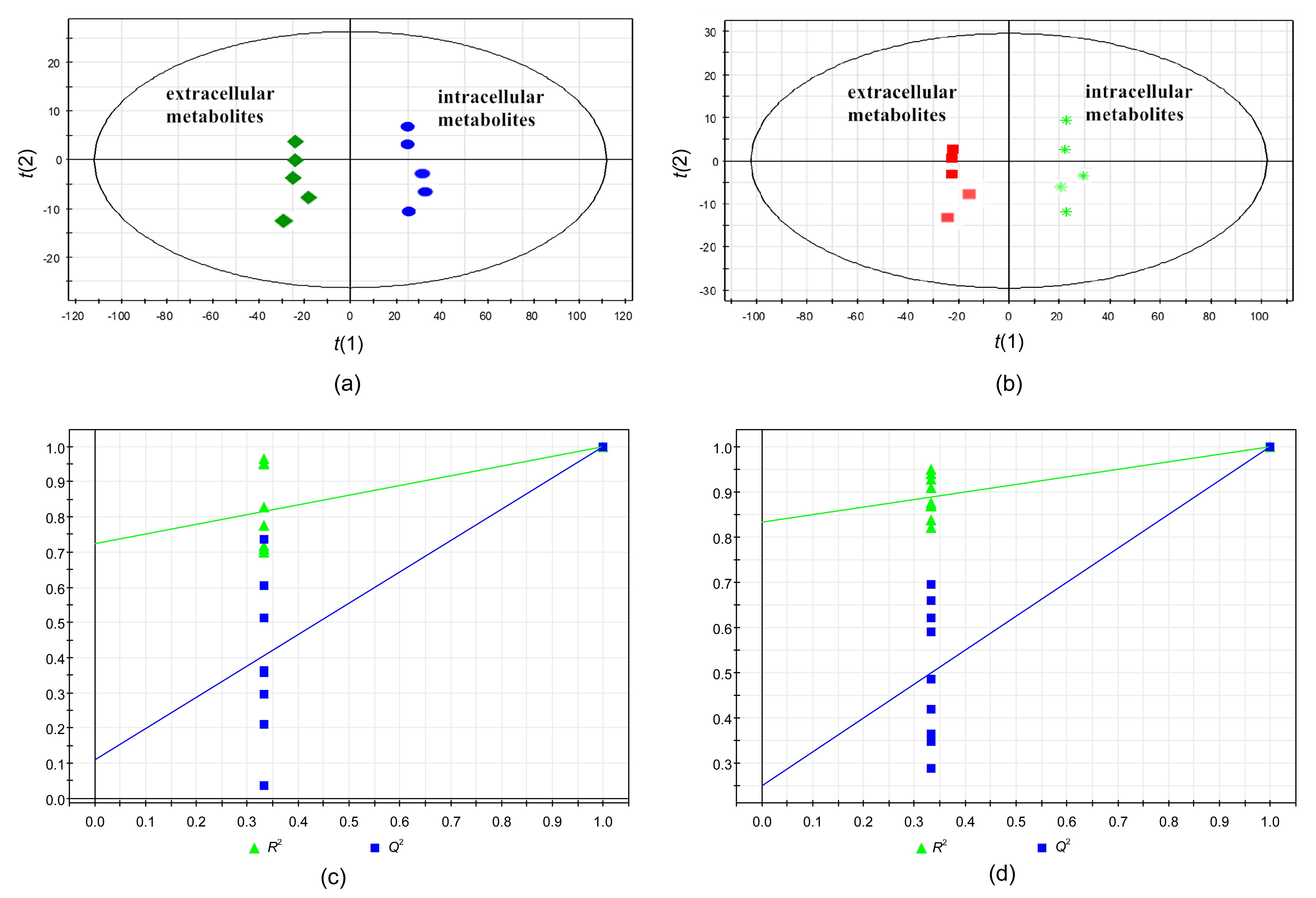 Fig.7
Comparison of the leakage rates of metabolites caused by 60% and 80% cold methanol
Data are expressed as mean±SD (n=5)

Bacterial cells are sensitive to quenching solutions, which results in damage to the cell wall and membrane and the loss of intracellular metabolites (Duetz and Witholt, 2004; Kumar et al., 2004). Therefore, this study focused on comparing different methanol solutions, including 60% Meth, 80% Meth/gly, and 80% Meth, for proposing an appropriate quenching protocol for L. bulgaricus.

Firstly, we evaluated the effects of quenching protocols on the membrane integrity and cell lysis by flow cytometry using PI dye and OD recovery ratio. It was found that increasing the methanol concentration or using the glycerol as a buffer was very effective for reducing cell membrane damage. Previous studies confirmed that both methanol and glycerol were effective cryoprotectants for L. bulgaricus and had the ability to enhance the cell viability against freezing damage (Carvalho et al., 2004; Fonseca et al., 2006). Especially, glycerol as a permeable compound could protect freeze-dried lactic acid bacteria through inhibiting excess dehydration, reducing salt toxicity, and preventing ice crystals formation (Huang et al., 2006). Recently, isosmotic glycerol solution was widely applied as a quenching agent to maintain osmotic pressure for bacterial cells (Villas-Bôas and Bruheim, 2007). This work found that 80% Meth/gly quenching could reduce the cell damage to L. bulgaricus. Hence, it is suggested that L. bulgaricus cells quenched in the presence of glycerol could effectively protect the stability of cell membrane.

Further, OPLS-DA was employed to investigate the differences between extracellular and intracellular metabolite profiles derived from different quenching methods. The reliabilities of the OPLS-DA models had been validated by permutation tests. The OPLS-DA score plots showed a trend toward differentiating between supernatant and intracellular samples quenched with 60% or 80% Meth. In accordance with the previous studies, cold methanol quenching led to some metabolite losses from bacterial cells (Bolten et al., 2007; Spura et al., 2009). In our study, the supernatant sample of 80% Meth treatment contained lower concentrations of metabolites compared with the remaining intracellular concentrations. Furthermore, the leakage rate of the sample prepared using 80% Meth was lower than that of the 60% Meth group, suggesting that the 80% Meth quenching method is a preferable method for the analysis of the intracellular metabolites from L. bulgaricus.

In summary, quenching is a critical step in the evaluation of L. bulgaricus metabolomics. Compared to the general quenching in 60% cold methanol fluid, it is proposed that a 80% cold methanol or 80% cold methanol/glycerol solution was better for reducing the extent of leakage and examining higher concentrations of intracellular metabolites. The application of an optimized quenching process would contribute to identifying the specific biomarkers and also help to analyze the metabolic characteristics of L. bulgaricus.


*&nbspProject supported by the Open Research Fund for the MOE Key Laboratory of Dairy Science (No. 2012KLDSOF-07), the National Natural Science Foundation of China (No. 31000808), the Synergetic Innovation Center of Food Safety and Nutrition, and the Open Research Fund of Northeast Agricultural University, ChinaCompliance with ethics guidelines&nbspMing-ming CHEN, Ai-li LI, Mao-cheng SUN, Zhen FENG, Xiang-chen MENG, and Ying WANG declare that they have no conflict of interest.