1. EDVAM: a 3D eye-tracking dataset for....2. Theory and techniques for....3. Charlson comorbidity index helps....4. Adenovirus-mediated wild-type p53....5. Clinical analysis of pharyngeal....6. An efficacy analysis of anti-vascular....7. Effect of hepatic function on the....8. Local loss model of dividing flow in....9. Multi-biomarker strategy for....

Abstract: Objective: MicroRNAs (miRNAs) are genome-encoded, small non-coding RNAs that play important functions in development, biotic and abiotic stress responses, and other processes. Our aim was to explore the regulation of miRNA expression. Methods: We used bioinformatics methods to predict the core promoters of 440 miRNAs identified from a soybean (Glycine max) degradome library and to analyze cis-acting elements for 369 miRNAs. Results: The prediction results showed that 83.86% of the 440 miRNAs contained promoters in their upstream sequences, and 8.64% (38 loci) in their downstream sequences. The distributions of two core promoter elements, TATA-boxes and transcription start sites (TSSs), were similar. The cis-acting elements were examined to provide clues to the function and regulation of spatiotemporal expression of the miRNAs. Analyses of miRNA cis-elements and targets indicated a potential auxin response factor (ARF)- and gibberellin response factor (GARF)-mediated negative feedback loop for miRNA expression. Conclusions: The features of miRNAs from a Glycine max degradome library obtained here provide insights into the transcription regulation and functions of miRNAs in soybean.

Class II promoters contain two parts, a core promoter and upstream elements. The core promoter consists of at least two elements: a TATA box, which begins at about the −30 bp position, and an initiator, which is centered on the transcription start site (TSS) (Liu et al., 2010). Promoter elements of pre-miRNAs are similar to those of protein-coding genes (Smale, 2001). Bioinformatics analysis of the core miRNA promoters in model plants, including Arabidopsis thaliana and Oryza sativa, confirmed that the promoters of most known miRNA genes are of the same type as those of protein-coding genes and are transcribed by RNA polymerase II (Xie et al., 2005; Zhou et al., 2007; Cui et al., 2009). TATA-less promoters were also identified in Arabidopsis and rice. The promoters of most miRNA genes are found within 500-bp upstream of the TSS. Although substantial work has examined the promoters of protein-coding genes, the nature of miRNA promoter elements is still one of the most interesting aspects of small RNA biology (Megraw et al., 2006).

Soybean (Glycine max) is one of the most economically important agricultural crops in the world, and one of the most important global sources of protein and oil, both for food and for livestock feed. Soybean was the first legume species with a published high-quality draft genome sequence (Schmutz et al., 2010). Because miRNAs play an important regulatory role in a wide variety of developmental and metabolic processes in plants, more and more soybean miRNAs have been identified (Zhang et al., 2008; Chen et al., 2009; Wang et al., 2009; Guo et al., 2011; Kulcheski et al., 2011; Li et al., 2011; Song et al., 2011; Wong et al., 2011; Zeng et al., 2012; Hu et al., 2013), but the features of the upstream sequences of these miRNAs have not been comprehensively analyzed. Core promoters and cis-acting elements of 82 soybean miRNAs from the miRBase database were analyzed by bioinformatics methods (Liu et al., 2010), but this analysis involved a relatively small number of miRNA genes. We have identified substantial numbers of miRNAs by deep sequencing of a Glycine max degradome library (Hu et al., 2013). In this study, the core promoters and cis-acting elements of those miRNAs were predicted by bioinformatics methods to reveal the features of the core promoters of soybean miRNAs. The miRNA expression regulation pathway was also analyzed. These studies provide insights into the regulation of soybean miRNA expression.

A total of 440 miRNAs were identified from a soybean cDNA degradome library that was constructed from root, stem, leaf, and inflorescence tissues. The National Center for Biotechnology Information-Gene Expression Omnibus (NCBI-GEO) accession number of the G. max degradome sequences is GSE33380. All soybean miRNA sequences for prediction were divided into two groups based on their genomic background: “intronic miRNAs”, which overlap protein-coding genes, and “intergenic miRNAs”, which reside between protein-coding genes. The protein-coding genes included verified and hypothetical genes. The 440 soybean miRNAs included 34 intronic miRNAs and 406 intergenic miRNAs.

For promoter prediction, the upstream and downstream sequences of the 440 miRNA genes were downloaded from the soybean genome database (http://www.phytozome.net/index.php) (Goodstein et al., 2012). The upstream sequences of pre-microRNAs (hairpin precursors) of each miRNA gene were obtained according to Cui et al. (2009). The 200-bp downstream sequence of each miRNA gene was also used for promoter prediction. For 83.86% of the pre-microRNAs (hairpin precursors), the upstream sequence was 2000 bp or longer. Promoters were predicted by the plant promoter identification program TSSP (http://www.softberry.com), which is designed for predicting plant Pol II promoters (Shahmuradov et al., 2005). The predictions were obtained at the default TSSP settings.

Potential promoter regions (from TSS to 800 bp upstream) were obtained to predict the potential cis-acting elements and motifs. If there were overlapping TSSs in the selected region, only the sequence between the two TSSs was analyzed to exclude redundancy (Liu et al., 2010). The PlantCARE database (http://bioinformatics.psb.ugent.be/webtools/plantcare/html), a database of plant cis-acting regulatory elements (Lescot et al., 2002), was used to analyze the cis-acting elements of the miRNAs. 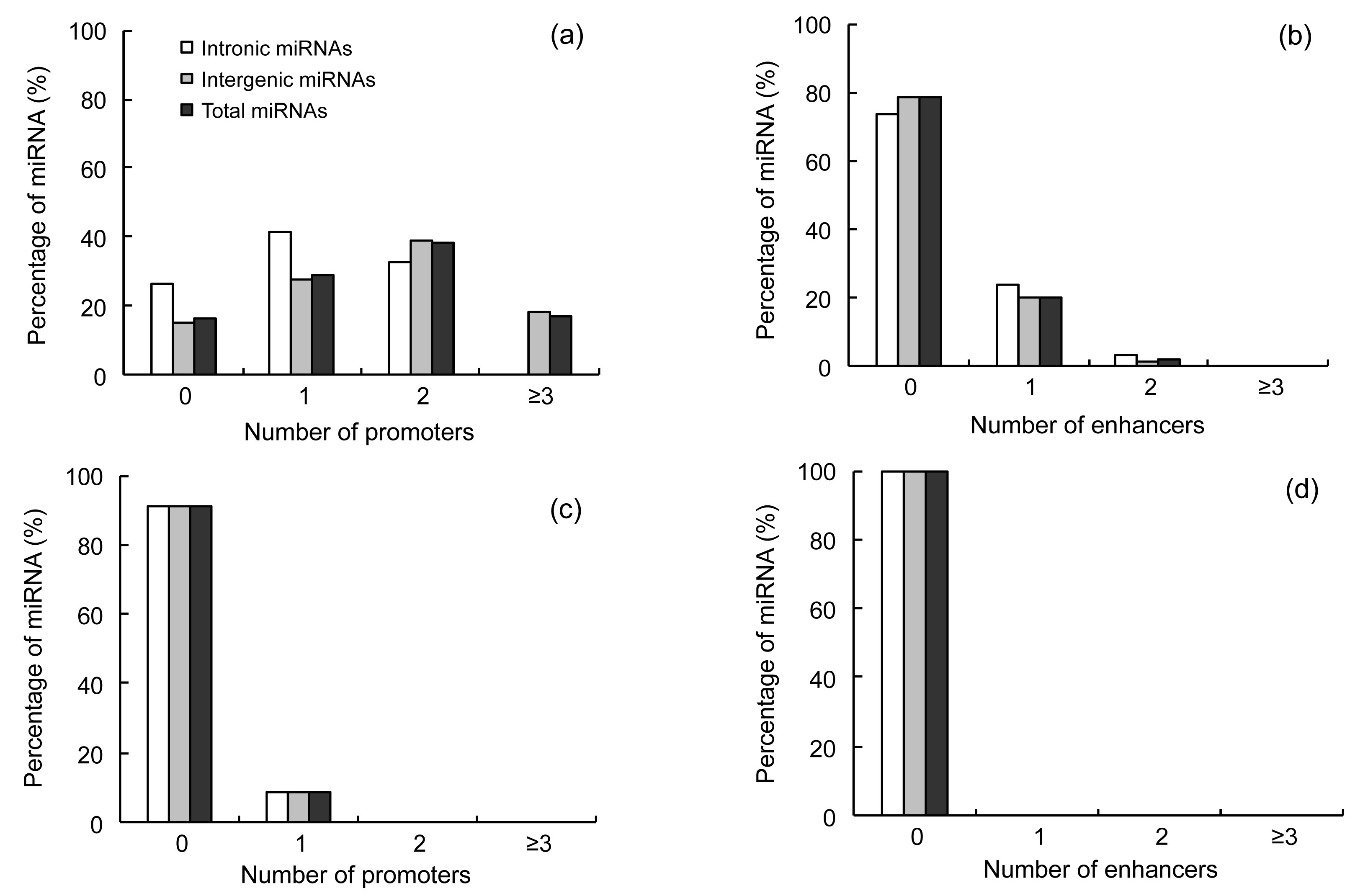