Abstract: A total of 8375 genic simple sequence repeat (SSR) loci were discovered from a unigene set assembled from 116 282 transcriptomic unigenes in this study. Dinucleotide repeat motifs were the most common with a frequency of 65.11%, followed by trinucleotide (32.81%). A total of 4100 primer pairs were designed from the SSR loci. Of these, 343 primer pairs (repeat length ≥15 bp) were synthesized with an M13 tail and tested for stable amplification and polymorphism in four Pyrus accessions. After the preliminary test, 104 polymorphic genic SSR markers were developed; dinucleotide and trinucleotide repeats represented 97.11% (101) of these. Twenty-eight polymorphic genic SSR markers were selected randomly to further validate genetic diversity among 28 Pyrus accessions. These markers displayed a high level of polymorphism. The number of alleles at these SSR loci ranged from 2 to 17, with a mean of 9.43 alleles per locus, and the polymorphism information content (PIC) values ranged from 0.26 to 0.91. The UPGMA (unweighted pair-group method with arithmetic average) cluster analysis grouped the 28 Pyrus accessions into two groups: Oriental pears and Occidental pears, which are congruent to the traditional taxonomy, demonstrating their effectiveness in analyzing Pyrus phylogenetic relationships, enriching rare Pyrus EST-SSR resources, and confirming the potential value of a pear transcriptome database for the development of new SSR markers.

The genus Pyrus is classified in subtribe Pyrinae within tribe Pyreae of the family Rosaceae (Potter et al., 2007), and includes approximately 22 well-recognized primary species as well as several natural or artificial interspecific hybrids (Bell and Zwet, 1998). It is a functionally diploid genus (2n=34) of allopolyploid origin and is believed to have arisen about 55–65 million years ago in the mountainous regions of western and southwestern China (Rubtsov, 1944). However, because pears are considered to be typically self-incompatible and interspecies compatible, phylogenetic relationships within the genus Pyrus are complicated and difficult to be established because of high heterozygosity from widespread crossing and low morphological diversity or poor differentiating characters (Teng et al., 2002; Bao et al., 2007; Yao et al., 2010; Zheng et al., 2011). Hence, more DNA-based genetic markers need to be exploited to resolve these problems.

Simple sequence repeats (SSRs) or microsatellites are one of the most efficient genetic markers. By virtue of their reproducibility, multi-allelic nature, co-dominant inheritance, relative abundance, and good genome coverage (Powell et al., 1996), SSR markers have been largely applied to genetic diversity studies (Gupta and Varshney, 2000; Chen et al., 2011; Zhang et al., 2013) and used in a variety of applications related to pears, demonstrating their adaptability for Pyrus (Yamamoto et al., 2002; 2004; Bao et al., 2007; Katayama et al., 2007; Yao et al., 2010; Cao et al., 2012). SSR loci consist of randomly repeated DNA regions with motif lengths of one to six base pairs (bp) and are spread throughout the genome (Tóth et al., 2000). According to their locations in the genome, SSR markers are generally divided into genomic SSRs and genic SSRs (or expressed sequence tag (EST)-SSRs); in comparison with genomic SSR markers, genic SSR markers are derived from coding regions and are believed to have some intrinsic advantages, such as inexpensiveness and relative ease of obtaining, applicability to assaying functional diversity in natural populations or germ-plasm collections, high transferability to related species, and usefulness as anchor markers for comparative mapping or evolutionary studies (Varshney et al., 2005).

However, the development of genic SSRs can be difficult because of the laborious and costly collection of ESTs (Bouck and Vision, 2006), so few pear ESTs (about 4413, before June 7, 2013) have been submitted to GenBank and few studies on the development of EST-SSR markers from Pyrus have been reported (Nishitani et al., 2009). Most of the EST-SSRs used in pear genetic diversity were derived from Malus (Yamamoto et al., 2001; Yao et al., 2010). With the development of the next-generation sequencing technology, creating transcriptome-level sequence collections has become much quicker and cheaper (Mardis, 2008). As a result, a wealth of gene-based SSRs and other genetic markers depending on such resources have been identified and developed in various plant species (Vendramin et al., 2006; Blanca et al., 2011; Dutta et al., 2011; Kaur et al., 2012; Lesser et al., 2012), but have not been reported in Pyrus.

Although a pear genome sequence was obtained with a genome size of 512 Mbp recently (Wu et al., 2013), which provides an excellent platform for future genetic marker development and phylogenetic relationship analysis in Pyrus, SSR markers designed from ESTs or unigenes possess higher amplification rates and cross-species transferability (Barbará et al., 2007). Therefore, a transcriptome database offers an attractive alternative to complement existing SSR collections. In this study, we reported the first development of genic SSR markers in Pyrus, which adds to the available resources and provides new opportunities for assessing molecular phylogeny and genetic diversity in the Pyrus species.

A total of 29 accessions from Pyrus were used in the development of the genic SSR markers in this study (Table 1). Genomic DNA was extracted from young leaves of these Pyrus accessions using a modified version of a cetyltrimethylammonium bromide (CTAB) protocol (Doyle and Doyle, 1987). DNA quality and quantity were checked in 1% agarose gels and Eppendorf BioSpectrometer (Eppendorf, Germany), respectively.

List of 29 Pyrus accessions used in the polymorphism analysis

2.2.  Identification of SSR loci from the pear bud transcriptome

A total of 116 282 unigenes were obtained from the ‘Suli’ pear (Pyrus pyrifolia white pear group) bud transcriptome in a previous study (Liu et al., 2012). Genic SSR loci in this pear bud transcriptome were identified from the unigene set by MIcroSAtellite identification tool (MISA) (Thiel et al., 2003), which is based on the Perl language. The SSR loci containing repeat units of 2–6 nucleotides were identified, and the minimum SSR length criteria were defined as six iterations for dinucleotide repeats, and five iterations for other repeat units.

BatchPrimer3 interface modules (You et al., 2008) were used to construct polymerase chain reaction (PCR) primers in the flanking regions of the SSR loci. The screening strategies for primer pairs were set as follows: 18–22 bp with an optimum size of 20 bp for the length of the primers, 60 °C for annealing temperature, 100–280 bp for the size of PCR products, and 40%–60% with an optimum of 50% for the guanine-cytosine (GC) content. Other parameters were at the default setting of the software. Three primer pairs were designed for each SSR locus, and the primer pair with the highest score was chosen as the best one.

Primers for compound SSR types were excluded. According to the length variation analysis of microsatellites in rice, all primers with a repeat length ≥15 bp were selected, a large proportion of which are the type I SSR markers (repeat length ≥20 bp), deemed to have a high chance of showing polymorphism (Singh et al., 2010). A subset of 343 primers without more than four continuous single base repeats in the primer pairs was synthesized and tested for amplification. An economic method for fluorescent labeling of PCR fragments was adopted to test their polymorphism (Schuelke, 2000). A tail (M13 universal sequence, TGTAAAACGACGGCCAGT) was added to the 5' end of each of the 343 forward primers. The primers were synthesized by Invitrogen Trading (Shanghai) Co., Ltd. Four Pyrus accessions, ‘Huiyangqingli’, ‘Huiyangsuanli’, P. ussuriensis, and P. communis, were used to test the 343 SSR markers to confirm their amplification and polymorphism. The tail primers were labeled with the following four dyes: FAM (blue), HEX (green), NED (yellow), and PET (red). FAM-tail and HEX-tail were synthesized by Invitrogen Trading (Shanghai) Co., Ltd.; NED-tail and PET-tail by Applied Biosystems (Foster City, CA, USA).

The primers were divided into four subsets based on their product sizes, and then amplified with the four fluorescent tail primers using the same reaction volume. The PCR products with different fluorescent tails were diluted, then mixed with the internal size standard LIZ500, and loaded onto an ABI 3130 genetic analyzer (Applied Biosystems, Foster City, CA, USA). The sizes of fragments and alleles were calculated using GeneMapper version 4.0 (Applied Biosystems, Foster City, CA, USA).

Twenty-eight SSR markers were randomly selected from the polymorphic markers to validate genetic diversity in 28 Pyrus accessions, using the same PCR program and scoring approach. Several primers were separately amplified twice to confirm the veracity of scoring. The occurrences of null alleles at each locus were checked using MICROCHECKER 2.2.3 software (van Oosterhout et al., 2004). POPGENE version 1.32 (Yeh and Boyle, 1997) was used to calculate the frequency of the major genotypes (A), the number of genotypes (N g), the number of alleles (N a), observed heterozygosity (H o), and expected heterozygosity (H e). PowerMarker version 3.25 (Liu and Muse, 2005) was used to test for polymorphism information content (PIC). Freetree.0.9.1.50 (Pavlicek et al., 1999) was used to construct a dendrogram using UPGMA (unweighted pair-group method with arithmetic average) cluster analysis based on Nei’s genetic identity (Nei, 1973), and the confidence of the branch support was evaluated by bootstrap analysis with 1000 replicates.

3.1.  Frequency and distribution of genic SSRs in the pear bud transcriptome

Repeat motifs among these SSR loci consisted of 64 types (considering sequence complementarity), and the number of iterations of a given repeat unit varied from 5 to 18. Incidences of different repeat types and frequencies for each motif were evaluated based on the repeat unit number (Table 2). The most abundant motif was dinucleotide (65.11%), consistent with our observations of Pyrus EST-SSRs (Nishitani et al., 2009), followed by trinucleotide (32.81%). The most common class was n=6 (27.20%), containing mostly dinucleotide repeats. AG/CT comprised 86.94% of all dinucleotide motifs and was the most common type (Fig. 1a), similar to our analysis of EST-SSRs (Kantety et al., 2002; Yao et al., 2010). This is probably because the AG/CT dinucleotide motif can represent multiple codons resting within the reading frame that can be translated into different amino acids, and AG/CT could be present in the codons of Ala and Leu, which have the highest frequency in proteins (Yao et al., 2010). The predominant trinucleotide repeat motifs were AAG/CTT and AGG/CCT, which accounted for 25.29% and 20.74%, respectively (Fig. 1b). 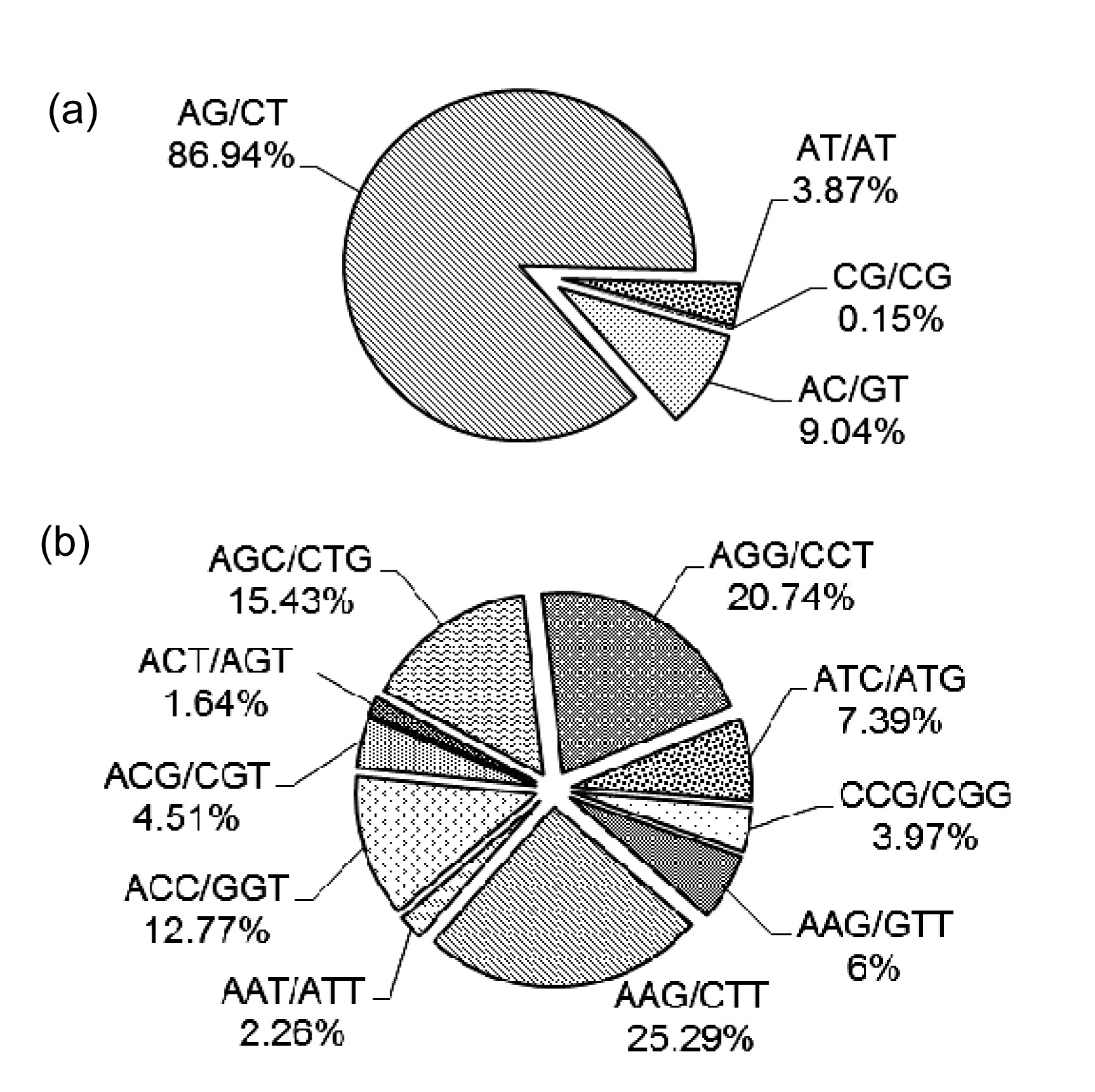 Fig.1
Percentages of different motifs among dinucleotide (a) and trinucleotide (b) repeats in the ‘Suli’ pear bud transcriptome