1. Theory and techniques for....2. EDVAM: a 3D eye-tracking dataset for....3. Impact of COVID-19 pandemic on the....4. Video-assisted thoracoscopic surgery....5. Exponential response electrical....6. Prediction of birth weight in....7. Normal epigenetic inheritance in mice....8. Impact of DNA mismatch repair system....9. Use of electroacupuncture and....

In our study, we describe a case of a bilateral ectopic pregnancy, where the timing of the diagnosis via laparoscopy was 22 d apart in a patient who had previously undergone ovulation induction and intrauterine insemination (IUI).

A 25-year-old woman with a history of subfertility for three years, attended the Department of Reproductive Endocrinology, Women’s Hospital, School of Medicine, Zhejiang University, China. She had a previous history of abortion and polycystic ovary syndrome (PCOS) diagnosed six months ago. She had oligomenorrhea and ultrasound features of polycystic ovaries. The basal endocrinal results at cycle Day 3 were as follows: luteinizing hormone (LH) 6.62 IU/L, follicle-stimulating hormone (FSH) 4.71 IU/L, testosterone (TTE) 2.8 nmol/L, oestrodial (E2) 139.9 pmol/L, progesterone (P) 3.77 nmol/L, and prolactin (PRL) 15.6 ng/ml. The hysterosalpingography (HSG) showed that the uterine cavity and fallopian tubes were spreading out. The semen analysis of her husband was normal according to the criteria from the World Health Organization (WHO).

On Day 15 of post-IUI, the woman was admitted to the emergency room because of light vaginal bleeding. Her serum β-hCG was 60.23 IU/L (Fig. 1). Eight days later, the patient was admitted complaining of right lower abdominal pain with β-hCG 1204 IU/L, and transvaginal ultrasonography (USG) revealed a possible right adnexal mass suggestive of an ectopic pregnancy lesion (Figs. 2a and 2b). The patient had a laparoscopy and right salpingectomy for a 4-cm unruptured right ampullary ectopic pregnancy. The left fallopian tube and the rest of the pelvis were inspected and deemed normal. Histological examination confirmed the presence of the early placenta in the resected right tube (Fig. 3a). Serum β-hCG level dropped to 377.9 IU/L on the first day after the surgery. The patient was discharged 3 d later. 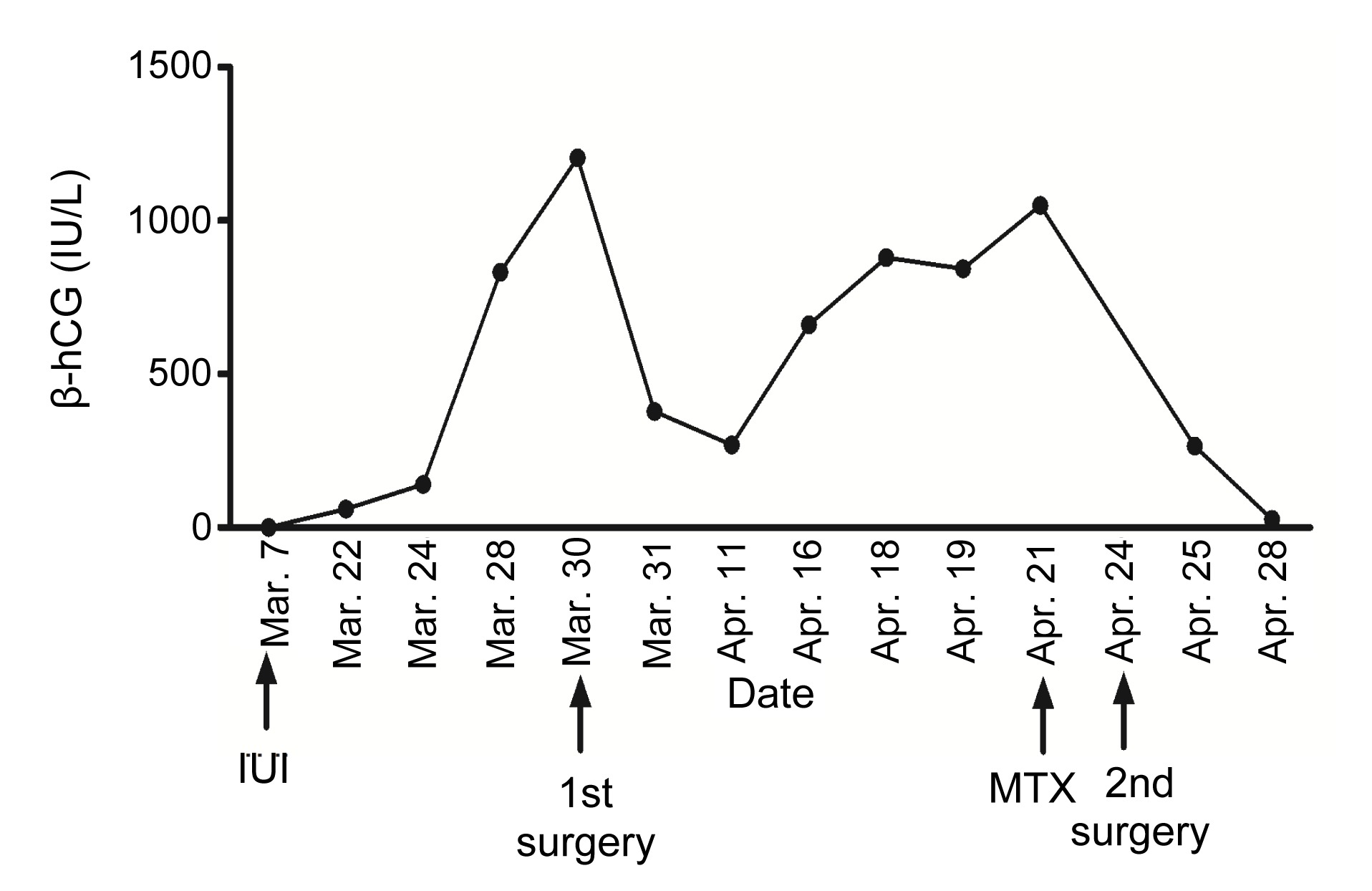 Fig.2
Pelvic ultrasonography (USG) images
(a) The uterus showed the absence of any gestation sac. No pseudosac was detected before the first surgery. (b) Ultrasound revealed the right ovary and the lateral mass, in which a gestational sac could be seen. (c, d) Ultrasound showed bilateral ovaries on Day 19 after the first surgery of the right ectopic pregnancy: the left ovary (c) and the right ovary (d). (e, f) Ultrasound results on Day 21 after the first surgery of the ectopic pregnancy: the normal uterus and endometrium (e) and a mass adjacent to but separated from the left ovary (f). (g) A large mass was detected by vaginal ultrasound in the left side. (h) A large collection of hemorrhagic fluid in the pelvic cavity 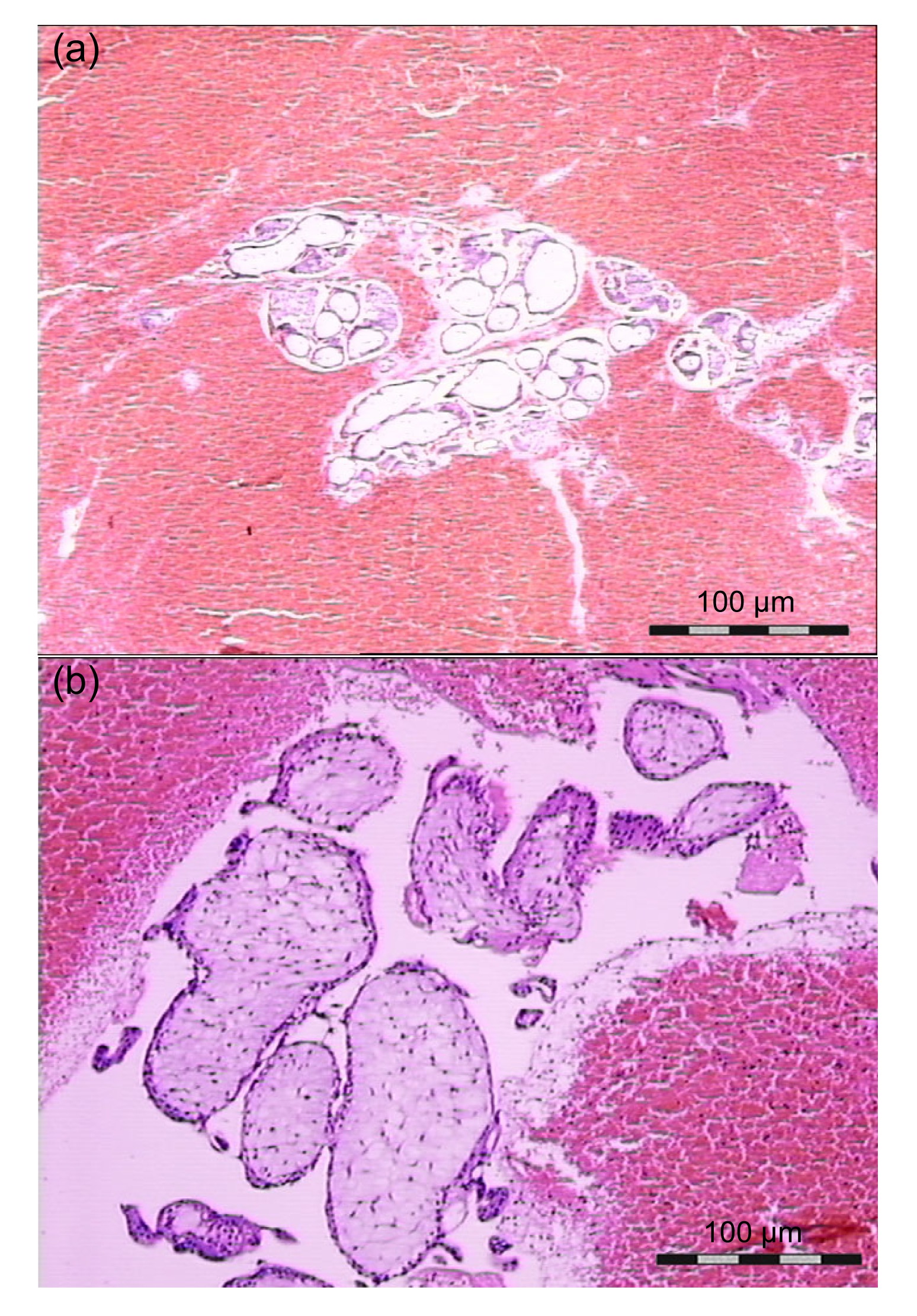 The patient was monitored in accordance to local protocol because her serum β-hCG started to increase again after an initial decrease, and a USG performed 21 d after the first surgery revealed a complex mass measuring 2.2 cm×1.4 cm×1.6 cm in the left adnexa (Figs. 2c–2f). As the serum β-hCG level (1049 IU/L) was relatively low, methotrexate treatment was administrated intramuscularly after obtaining an informed consent signed by the patient.

Three days after the methotrexate administration, the patient suffered acutely from severe left lower quadrant pain, tachycardia (110 beats/min), and hypotension (76/49 mmHg), with signs of acute blood loss and the hemoglobin concentration dropped from 13.3 to 11.9 g/dl within 1 h. USG revealed a 3.7 cm×2.8 cm×2.7 cm left adnexal mass suggestive of an ectopic pregnancy and free fluid was also noted around the left fallopian tube (Figs. 2g and 2h). She had a left salpingectomy, and the histological examination confirmed the left ectopic pregnancy (Fig. 3b).

Among the 16 cases, the ectopic pregnancy on both two sides was identified by USG in only 6 cases, one by a computer tomography (CT) scan, and the others by exploratory laparoscopy. In de los Ríos et al. (2007)’s review, only 2 of 42 cases were recognized and accurately diagnosed by USG. This poor rate of diagnosis by ultrasound revealed the fact that USG might not be very helpful in the identification of bilateral ectopic pregnancies. Therefore, the combination of symptoms, serum β-hCG level measurement, and USG should all be considered before operating. The inspection of both fallopian tubes should not be forgotten during the surgery in order to prevent a worsening prognosis, or even a life-threatening condition (Ayoubi and Fanchin, 2003).

The most unusual part of this case is the heterochronism of the bilateral ectopic pregnancy. Most reported bilateral ectopic pregnancies occurred and developed simultaneously, so the diagnoses were made at the same time on both sides. In this case, careful exploration of the contralateral fallopian tube did not reveal any signs of a developing ectopic pregnancy. The first and second ectopic pregnancies were diagnosed 23 and 45 d, respectively, after the original IUI. The two embryos were either derived from two fertilized ovums or one cleaved blastocyst. The rates of development of the two blastocysts could be distinctly different, as an observation that is not uncommon in the IVF laboratory during the early stages of embryo development, thus accounting for the delay in diagnosis between the two ectopic pregnancies. At the first exploration, the contralateral implanted embryo was too underdeveloped to be spotted by laparoscopy, which contributed to the consequently delayed diagnosis of ectopic pregnancy. IVF or intracytoplasmic sperm injection (ICSI) following ovulation induction has shown adverse effect on offspring, and this study showed the association of ovulation with bilateral ectopic pregnancy (Wang et al., 2013; Xing et al., 2014).


*&nbspProject supported by the National Basic Research Program (973) of China (No. 2013CB967404), the National Natural Science Foundation of China (Nos. 81170310 and 81270664), the Science Foundation for Distinguished Young Scholars of Zhejiang Province (No. LR14H040001), and the Talent Project of Zhejiang Province (No. 2011RCA028), ChinaCompliance with ethics guidelines&nbspBo ZHU, Gu-feng XU, Yi-feng LIU, Fan QU, Wei-miao YAO, Yi-min ZHU, Hui-juan GAO, and Dan ZHANG declare that they have no conflict of interest.