Abstract: cardiac rupture (CR) is a potentially fatal mechanical complication of ST-elevation myocardial infarction (STEMI). We aimed to determine the incidence and risk factors of CR in Chinese STEMI patients. A total of 9798 consecutive STEMI patients from four centers in China were retrospectively analyzed, among which 178 patients had CR. STEMI patients without CR were chosen as a control group. Clinical characteristics were compared between STEMI patients with CR and those without CR. The incidence of CR in STEMI patients was 1.82%, and the 30-d mortality was up to 61.2%. CR patients were significantly older, more female, and associated with a longer time from onset of pain to hospital admission than their non-CR counterparts (P<0.001). More patients with anterior myocardial infarction (82.1%) were found in the CR group, and CR patients had significantly higher heart rates than the control group ((91±19) bpm vs. (71±16) bpm; P<0.001). In multiple-adjusted models, the independent risk factors of CR were advanced age, female gender, anaemia, increased heart rate, anterior myocardial infarction, increased white blood cell (WBC) count, delayed admission, and renal dysfunction. The level of hemoglobin remained a significant determinant factor of CR (OR (95% CI): 0.82 (0.75–0.89); P<0.001) after adjusting for various potential confounding factors. Counts of WBC also remained a significant determinant of the CR (OR (95% CI): 1.08 (1.04–1.12); P<0.001). A number of variables were independently related to CR. This study indicated, for the first time, that both hemoglobin and WBC levels were independently correlated with occurrence of CR.

Cardiac rupture (CR) after ST-elevation myocardial infarction (STEMI) includes free-wall rupture (FWR), ventricular septal rupture (VSR), and papillary muscle rupture (PMR). Along with the development of primary percutaneous coronary intervention (PCI) and drug therapy, the incidence of CR has gradually declined (Figueras et al., 2008). However, there are still a number of deaths caused by CR that could not been determined until autopsy. CR is still one of the common causes of in-hospital deaths for STEMI patients (Markowicz-Pawlus et al., 2007; Figueras et al., 2008). The determination of CR risk factors plays an important role in the prevention of CR. Independent risk factors reported include female gender, advanced age, lower blood pressure, higher heart rate, delayed admission, and thrombolysis (Yip et al., 2003; Okino et al., 2005; French et al., 2010; Lopez-Sendon et al., 2010; Qian et al., 2011). Patients with CR have new clinical characteristics in the era of reperfusion. Up to now there has been a lack of systemic research on the assessment of CR risk factors in Chinese STEMI patients from multiple centers. The objective of our study was to determine the incidence and risk factors of CR in Chinese STEMI patients.

We retrospectively analyzed a total of 9798 consecutive STEMI patients who were admitted from January 2011 to January 2013 from four centers (Chinese PLA General Hospital, Beijing Anzhen Hospital, Beijing Fuwai Hospital, and Beijing Chao-Yang Hospital). One hundred and seventy-eight of these patients with CR served as a case group, and the others without CR were chosen as a control group. Diagnosis of STEMI was based on the concurrence of symptoms (chest pain or symptoms compatible with acute heart failure or unexplained syncope) and electrocardiogram findings (ST-segment elevation ≥1 mm in ≥2 inferior leads or ≥2 mm in ≥2 precordial leads). The diagnosis of FWR was based on strict necropsy or electrical mechanical dissociation or pericardial tamponade accompanied with laboratory results (echocardiography showed massive pericardial effusion and diagnostic pericardiocentesis showed bloody fluid). VSR and PMR were established by the emergence of new systolic murmurs and the result of echocardiography. STEMI patients received aspirin, clopidogrel, statin, low molecular weight heparin (LMWH), β-blockers, and angiotensin converting enzyme inhibitors (ACEIs) or angiotensin receptor blockers (ARBs) according to the STEMI guideline (Kushner et al., 2009), unless there were contraindications to these drugs. We provided a comparative analysis between CR patients and non-CR patients by clinical manifestations, laboratory profiles, and the treatments during their stay in hospital. Peripheral blood samples were collected from patients within 12 h of admission for blood routines and biochemistry examinations.

3.2.  Clinical characteristics and treatments before CR

Demographics, medical histories, clinical features, and treatments in patients with and without CR are shown in Table 1. The female proportion and advanced age proportion in the CR group were significantly higher than those in the control group (P<0.001). The occurrence of hypertension was more frequent in CR patients (P<0.001), whereas smoking occurred less frequently in CR patients (P=0.037). More patients with anterior myocardial infarction (82.1%) were found in the CR group. There were also significant trends toward higher heart rate and lower blood pressure in the CR group (P<0.001). The initial hemoglobin levels of the CR group were significantly lower than those of the control group ((12.1±1.8) g/dl vs. (13.4±2.0) g/dl; P<0.001), while the white blood cell (WBC) counts were significantly higher in the CR group ((11.5±4.2)×109 L−1 vs. (9.6±3.7)×109 L−1; P<0.001). The CR patients tended to have longer time from onset of pain to first medical contact (12 (6–22) h vs. 10 (4–16) h; P<0.001). Both left ventricular ejection fraction and Killip class indicated that the CR group had worse heart function. Recommended medications within the first 24 h including ACEI/ARB and β-blockers were used less frequently in CR patients (P<0.001). Furthermore, primary PCI treatment was used more frequently in the non-CR group (P<0.001).

3.4.  New CR predictors: the relationships between results of blood routine and CR

Association between anemia and cardiac rupture (CR) evaluated with logistic regression analysis, with adjustments for age, gender, and other confounding factors

Association between higher count of WBC and cardiac rupture (CR) evaluated with logistic regression analysis, with adjustments for age, gender and other confounding factors 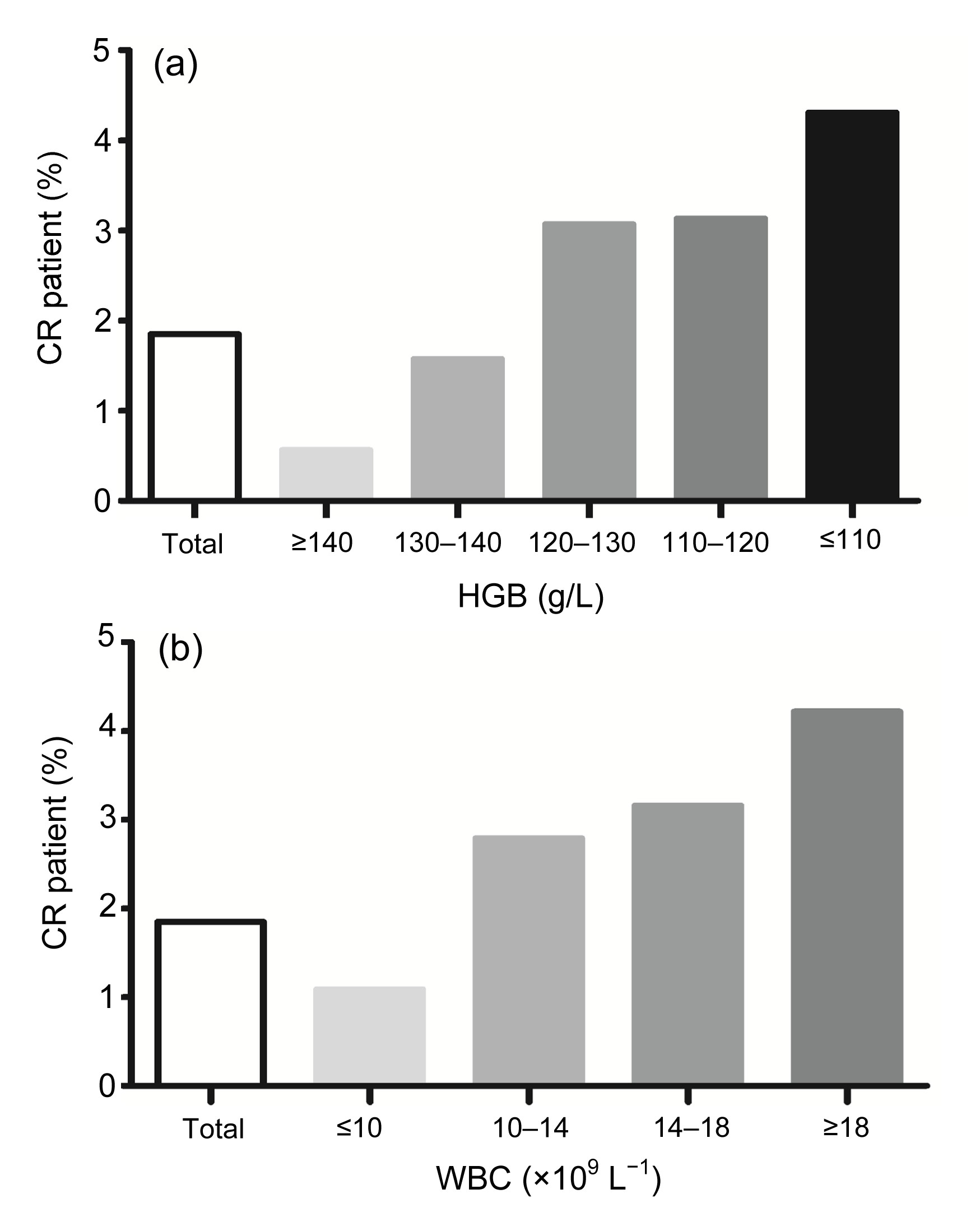 CR remains a major cause of mortality after STEMI and persists as a clinic challenge (Gao et al., 2012). The current incidence of rupture reported in the literature is between 1% and 3% of patients suffering STEMI (Okino et al., 2005; French et al., 2010; Lopez-Sendon et al., 2010). However, autopsy research detected CR in 30% to 65% of patients who died of acute myocardial infarction (AMI) (Hutchins et al., 2002), which indicated that CR might have been globally underestimated by misdiagnosis. Our study showed the incidence of CR was 1.8%, slightly lower than reported before, partly because of the strict diagnostic criteria in our study. Some sudden unexpected deaths were not diagnosed as CR due to lack of autopsy. The percentage of sudden deaths due to rupture remained high in the first month post-infarction (Pouleur et al., 2010). CR was the second cause of 30-d mortality for STEMI in our study (16.1%, 109/676), while pump failure was the first cause, which was in accordance with previous reports confirmed by autopsy (Shamshad et al., 2010).

It is necessary to have early and effective risk stratifications in STEMI patients according to risk factors of CR. Our research based on multicenter database was more credible than previous studies, and has investigated some new independent risk factors of CR. We further analyzed some new risk factors such as higher WBC count and lower level of hemoglobin. In particular, hemoglobin level decline independently correlated to occurrence of CR in Chinese STEMI patients after adjustments for other CR risk factors. In CR patients, leukocytes in filtration and hemorrhage are key histopathology (Lewis et al., 1969; Kawano et al., 1994; van den Borne et al., 2009). The intramyocardial dissecting hematoma might appear as a component of the rupture during the remodeling process, and increases the likelihood of CR (Pliam and Sternlieb, 1993; Vargas-Barrón et al., 2013). Both intramyocardial dissecting hematoma and intramyocardial hemorrhage are associated with hemoglobin level decline. On the other hand, pericardial effusion may be present for a few days prior to a fatal rupture (Figueras et al., 2010), implying that CR is a dynamic process. Pericardial effusion was also independently correlated with anemia in our study. In our previous research, we have indicated that risk of CR after AMI was related to the risk of hemorrhage (Qian et al., 2013). Hemorrhage of the myocardium often leads to hemoglobin level decline and bloody pericardial effusion, which could explain why anemia was closely associated with occurrence of CR. Both inflammatory cells in filtration and matrix metalloproteinase-9 (MMP-9) expression were significantly more severe in ruptured than in non-ruptured hearts with acute MI (Fang et al., 2007; van den Borne et al., 2009; Gao et al., 2010), which could explain why the CR group had higher WBC counts in our study.

The prevention of mechanical complications should be emphasized in the acute phase of STEMI. We aimed to establish a risk evaluation model providing a good discrimination in Chinese STEMI patients. An early and effective intervention strategy for CR prevention is necessary. Early use of β-blockers and ACEI/ARB could help to prevent CR for patients with high CR risk (Figueras et al., 2008; Pedrazzini et al., 2008). Primary PCI therapy rather than thrombolysis could reduce the incidence of CR (Yip et al., 2003; Okino et al., 2005; Figueras et al., 2008; Qian et al., 2011). The gradual decline in the incidence of CR over a 30-year period was associated with progressive implementation of primary PCI (Figueras et al., 2008). Such knowledge will help facilitate personalized decision-making for patients who are at high risk of CR.

This study has some limitations. CR is an uncommon clinical condition, and thus involves a limited number of cases. This study included a few cases diagnosed based on clinical manifestations rather than necropsy. This was a retrospective cohort study, so retrospective bias exists in the statistics.

The incidence of CR is low in Chinese STEMI patients, but is associated with poor prognosis. A number of variables are independently related to CR. This study pointed out, for the first time, that both hemoglobin and WBC levels were strongly and independently correlated with occurrence of CR.