Irritable bowel syndrome (IBS) is one of the most common functional bowel disorders seen by gastroenterologists and is characterized by intermittent episodes of abdominal pain or/and distension, without any organic diseases (Liu et al., 2014). IBS is common in Western countries, where the incidence is up to 20%. In recent years, the morbidity in Asian countries has been rising year by year, and has now nearly reached that of Western countries (Zhong and Hou, 2012; Song et al., 2012; Omagari et al., 2013). Without biological markers, the diagnosis of IBS depends mainly on the patient’s symptoms. According to Rome III criteria, IBS patients are subdivided into diarrhea-predominant IBS (D-IBS), constipation-predominant IBS (C-IBS), mixed type IBS (M-IBS), and un-subtyped IBS (U-IBS). The pathophysiology of IBS is complex and not fully understood; a central-peripheral regulatory mechanism may be involved (Zhou et al., 2010).

Although the pathophysiology of IBS is unclear, visceral hypersensitivity is one of the accepted mechanisms, and may have some relationships with the severity of the symptoms (Zhou et al., 2009). However, previous evaluations of visceral sensitivity have typically been based on “rapid phasic distension”, and Harraf et al. (1998) claimed that visceral hypersensitivity could not be induced by the “ascending method of limits (AML)” protocol. On the other hand, compared with normal controls, some IBS patients exhibit a high proportion of somatic hypersensitivity symptoms, such as migraine headaches, heartburn, back pain, and muscle pain. Most previous investigations of somatic hypersensitivity involved only a single stimulus method, and the conclusions were contradictory (Whitehead et al., 1990; Zighelboim et al., 1995). Whether autonomic cardiovascular dysfunction is involved in the pathological process of IBS is controversial (Elsenbruch and Orr, 2001; Tousignant-Laflamme et al., 2006; Cheng et al., 2013). Finally, a growing body of research evidence suggests that damage to the intestinal mucosal barrier and low-grade inflammation of the gut wall are related to the pathogenesis of IBS (Peuhkuri et al., 2010; Snoek et al., 2010; Liu et al., 2012).

This study was carried out from September 2013 to May 2014 in the Gastroenterology Kinetic Laboratory of the China-Japan Friendship Hospital, Beijing, China. Sixty-two patients with D-IBS and 20 control subjects participated in the study. IBS patients were recruited at the endoscopy center or the outpatient clinic, and control subjects were via advertisements. The participants gave their written informed consent prior to data collection. The study was approved by the Ethics Committee of the China-Japan Friendship Hospital, China. The diagnosis of all IBS patients was made by the same doctor and was based on the Rome III criteria, with normal colonoscopy examination. None of the controls had organic gastrointestinal disorder, abnormal laboratory findings, weight loss, anemia, bloody stools, family history of cancer, or other alarming signs, and those who were pregnant or had previously undergone gastrointestinal surgery were excluded from the study. None of the participants had taken serotonin antagonists, tricyclic antidepressants, pain medications, proton pump inhibitors, or serotonin uptake inhibitors for at least three weeks prior to the study.

All sessions were conducted between 8:00 am and 6:00 pm to avoid circadian rhythm effects. Demographics, such as the gender, age, height, weight, resting heart rate, and blood pressure, of all subjects were recorded. A research coordinator provided detailed information to the subjects about how to collect stool and urine specimens (for the purpose of gut wall inflammation and intestinal mucosal barrier function tests). Specimens were temporarily stored in a fridge at −80 °C for enzyme-linked immunosorbent assay (ELISA) testing. Fig. 1 shows the experimental process. 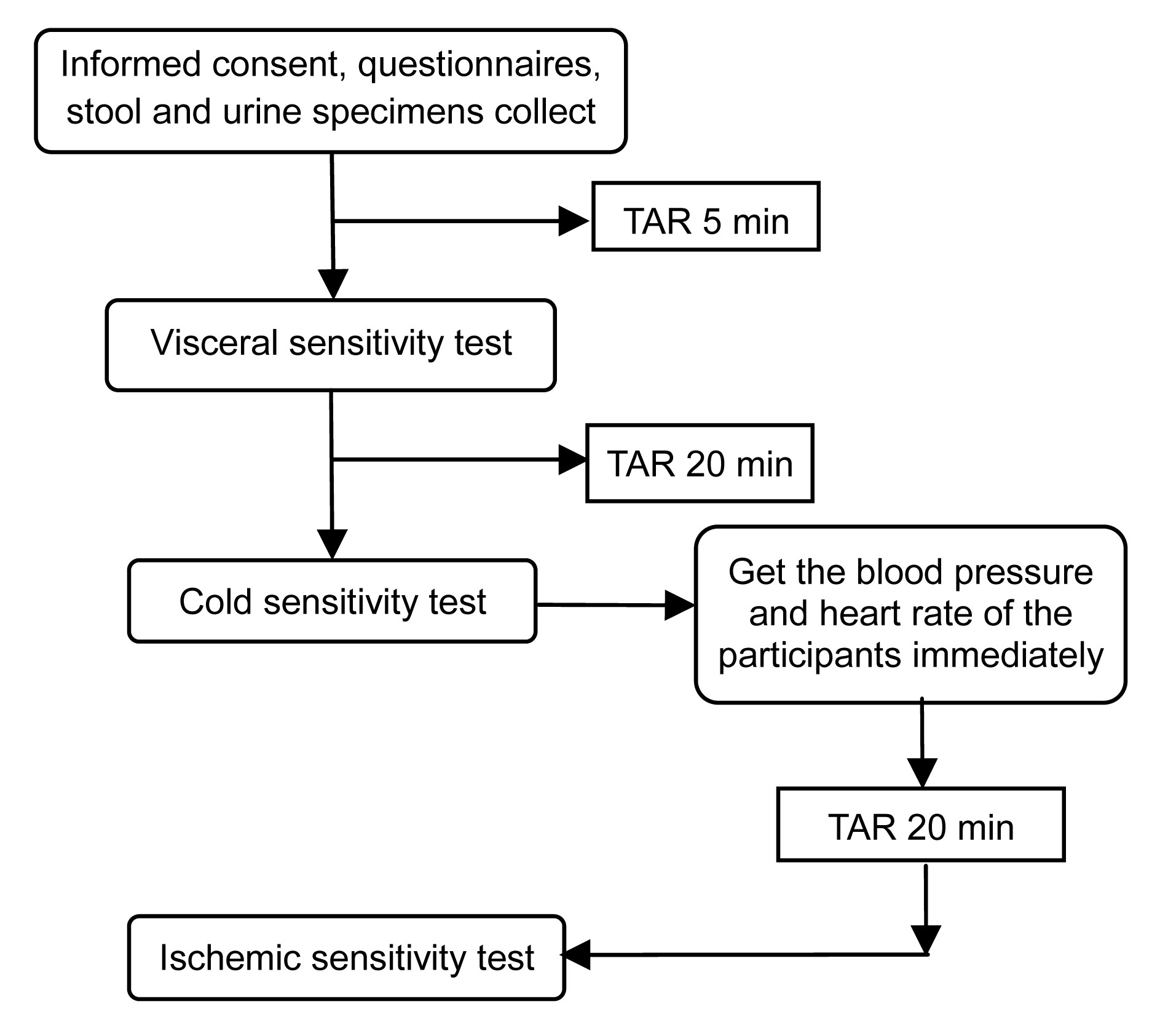 HADS is commonly used for estimating emotional disorders, and can be divided into anxiety (HAD-A) and depression (HAD-D) subscales (Dong et al., 2013). For each subscale, there are seven questions. A total score of 0–7 is classed as normal, 8–10 as borderline, and >11 as severe.

The IBS severity questionnaire, which includes five items, was used to assess the severity of symptoms. Each item has a 100-point scale and the final score is the sum of scores from the five items. Patients were defined as having mild IBS with the score of 75–175, moderately severe IBS with the score 175–300, or severe IBS of the score >300 (Francis et al., 1997; Singh et al., 2012).

A barostat (G&J Electronics Inc., Willowdale, Ontario, Canada) was used for this test. All subjects were placed in the left lateral decubitus position in a hospital bed. A lubricated polyethylene balloon (with a maximum volume of 600 ml) secured to a rectal catheter was inserted into the rectum such that the distal attachment site was 4 cm from the anal verge. The barostat was used to inflate the balloon. Distensions of 30-s duration were followed by 30-s rest intervals, starting at the operating pressure and progressively increasing in 1-mmHg steps. In the process of the test, patients were asked to report on sensory thresholds: initial feeling (IF), initial defecate feeling (IDF), embarrassment of defecation (EOD), and maximum of tolerance (MOT). If the MOT or the maximum pressure (50 mmHg) was reached, the balloon was deflated automatically. All subjects were examined by the same physician.

A cold pain test is commonly used to evaluate somatic sensitivity (Whitehead et al., 1990; Zighelboim et al., 1995). In this study, all subjects were asked to immerse their feet in water at 4 °C (the volume of cold water was such that the temperature change was not obvious in a short time). Subjects were instructed to keep their feet in the water for up to 5 min or until the pain became intolerable. The cold pain threshold (CPTh) was recorded as the time when the subjects first felt pain and the cold pain tolerance (CPTo) was recorded as the time when they removed their feet from the cold water. An automatic blood pressure monitor (Andon Health Co., Ltd., Tianjin, China) was then used immediately to record the systolic blood pressure (SBP) and heart rate (HR) of the participants.

A sphygmomanometer (Liankang Co., Ltd., Shanghai, China) was used for the ischemic sensitivity test. The right arm of the patient was elevated above heart level for 1 min, after which the blood flow was occluded with a blood pressure cuff. The cuff was inflated to 240 mmHg and kept at that level. Participants were told to perform 20 hand grip exercises (50% of maximum grip strength) with 2-s duration and 4-s rest interval. The ischemic pain threshold (IPTh) was recorded as the time when they first felt pain, and their ischemic pain tolerance (IPTo) was recorded when the pain was intolerable or when 15 min had elapsed (Zhou et al., 2010).

All participants completed the study. The demographic characteristics of participants are listed in Table 1. The gender distribution, height, weight, HAD-A, and HAD-D were similar between the D-IBS and control groups (P>0.05). D-IBS patients were much older on average than the healthy controls. Of the 62 D-IBS patients, 42 had moderately severe IBS, 20 had severe IBS, and none had mild IBS.

There were no significant differences in the SBP or HR in the resting state between the two groups (P>0.05; Table 4). However, the SBP and HR after the cold sensitivity test were much higher in D-IBS patients (P<0.001; Table 4).

Stool calprotectin was higher in D-IBS patients. Compared with the healthy controls, the D-IBS patients also showed elevated levels of I-FABP, I-BABP, and L-FABP, but these differences were not statistically significant (P>0.05; Table 5).

Results of stool and urine specimens

Unlike most previous studies, in this study, we used the AML method and demonstrated that compared with healthy controls, D-IBS patients had significantly lower sensory thresholds, i.e., they had visceral hypersensitivity. Harraf et al. (1998) claimed that visceral hypersensitivity could not be induced by the AML protocol. Compared with “rapid phasic distension”, which mainly stimulates the intestinal serosa receptors, the main effect of AML is through the stimulation of the intestinal mucosa and submucosa receptors. These receptors are involved in different nerve conduction pathways while also participating in intestinal perception (Mertz et al., 1995; Dorn et al., 2007). Visceral hypersensitivity is a biological marker in some IBS cases, especially D-IBS patients. In contrast to Posserud et al. (2007), we found no gender difference in the visceral hypersensitivity. Gender distribution was balanced in our IBS group, while Posserud et al. (2007)’s group was composed of almost all women. This may have caused a gender bias, and so comparisons with our study may be inappropriate.

In our study, we found that compared with the control group, D-IBS patients had a significantly higher SBP and HR after cold stimulus, indicating the presence of autonomic cardiovascular dysfunction in the IBS group. Few studies have found autonomic nervous system (ANS) dysfunction in response to a painful somatic stimulus, but our results suggest that when exposed to an external stimulus, such as cold water, the regulation of the ANS was in an abnormal state in IBS patients. This phenomenon suggests that the dysfunction of central-peripheral nerve regulation mechanisms may be involved in the pathogenesis of IBS.

A number of IBS, especially D-IBS, patients have a history of acute gastroenteritis (Zhong and Hou, 2012; Liu et al., 2012). Inflammation, even low-grade, can send many systemic and local signals, which may cause changes in the intestine (such as the dysfunction of digestion and absorption). Calprotectin, which is a protein released by white blood cells and stable in faeces, can indicate inflammation wherever it occurs in the digestive tract (Derikx et al., 2010). In this study, compared with the healthy group, D-IBS patients had a significantly higher level of calprotectin. Some studies have found that faeces calprotectin was not higher in IBS patients. The recruitment of only D-IBS patients and the relatively large sample size in our study may explain this discrepancy. Three isoforms of FABP (I-FABP, I-BABP, and L-FABP) are present in the intestinal villus (Derikx et al., 2010). The urinary concentration of FABP is a useful marker for evaluating intestinal mucosal barrier function. In our results, the concentrations of the three isoforms of FABP were all higher in D-IBS patients than those in the control group, but the differences were not statistically significant. We speculate that if the sample size had been larger, a significant difference may have been found.

To our surprise, in this study, we showed significant correlations between visceral and somatic hypersensitivity, visceral hypersensitivity and autonomic cardiovascular dysfunction, and somatic hypersensitivity and autonomic cardiovascular dysfunction, which have not been found before to our knowledge. Our results also suggest recommendations for the treatment of IBS. Previously, too much attention has been given to only intestinal symptoms. At present, the conventional drugs used in the treatment of IBS include: laxatives, antidiarrheals, prokinetics, probiotics, and antispasmodics. The role of these drugs is mainly to relieve the patient’s gastrointestinal symptoms, but the curative effects have been disappointing (Rahimi and Abdollahi, 2012). The possible reason is that many patients with IBS also exhibit a wide variety of extra-intestinal symptoms. From our results, individualized treatments (such as cognitive behavioral therapy, hypnotherapy, dietotherapy, relaxation, and stress management in improving the function of the ANS, and traditional Chinese medicine and acupuncture to relieve somatic hypersensitivity) are recommended to alleviate the extra-intestinal symptoms (Rahimi and Abdollahi, 2012; Wilkins et al., 2012; Chang, 2014). According to our data, the remission of extra-intestinal symptoms may be associated with the alleviation of gastrointestinal symptoms in D-IBS patients.

Unlike previous studies, no strong correlations between the severity of symptoms and experimental parameters were found in our study (Zhou et al., 2009), indicating that the mechanisms involved in the expression of symptoms are still complicated and inadequately understood.

A strength of our study was that our analysis excluded the confounding effects of mental factors. However, some limitations should be considered. First, the survey was restricted to D-IBS, so the findings may not be generally applicable to other subtypes. Second, based on the current research, we could not explain the results in terms of molecular mechanisms, a future area of research focus. Third, there were age differences between the IBS and control groups. Sometimes, this is unavoidable in real-life clinical research, but no significant effects of gender were found in our two groups. Furthermore, age difference is not an influential factor in the evaluation of experimental parameters such as visceral hypersensitivity (Posserud et al., 2007).