1. Segmental radiofrequency ablation of....2. Ultrasound ablation of pulmonary....3. Current progress of computational....4. Clinical considerations of....5. Metabolic benefits of rivaroxaban in....6. Risk analysis of new oral....7. Effect of corticosteroids on atrial....8. Effects of rapamycin against....9. Proteomic analysis of the serum in....10. Anticoagulation therapy in....

Abstract: Objective: To evaluate the incidence and clinical outcome of adenosine triphosphate (ATP) plus isoproterenol (ISP)-induced non-pulmonary vein (PV) foci before and after circumferential PV isolation (CPVI) during index ablation in patients with paroxysmal atrial fibrillation (PAF). Methods: In 80 consecutive patients undergoing catheter ablation for drug-refractory, symptomatic PAF at our hospital from April 2010 to January 2011, atrial fibrillation (AF) was provoked with ATP (20 mg) and ISP (20 μg/min) administration before and after CPVI. The spontaneous initiation of AF was mapped and recorded. Results: Before ablation, AF mostly originating from PVs (PV vs. non-PV, 36/70 vs. 3/70; P<0.01) was induced in 39 patients with sinus rhythm. CPVI significantly suppressed AF inducibility; however, more non-PV foci were provoked (post-CPVI vs. pre-CPVI, 13/76 vs. 3/70; P=0.016). Patients with pre- and post-CPVI induced AF (n=49) were divided according to non-PV foci being induced (group N, n=17) or not (group P, n=32). After mean (19.2±8.2) months follow-up, 88.2% (15/17) and 65.6% (21/32) of patients in groups N and P, respectively, were free from AF recurrence (P=0.088). Conclusions: ATP+ISP administration effectively provokes non-PV foci, especially after CPVI in PAF patients. Although in this study difference did not achieve statistical significance, supplementary ablation targeting non-PV foci might benefit clinical outcome.

Eighty consecutive patients (52 males, (58.8±10.4) years) with drug-refractory, symptomatic PAF, who received catheter ablation procedure between April 2010 and January 2011 at our center, were enrolled in the study. Mean atrial fibrillation (AF) duration was (5.2±5.5) years. PAF was defined as ≥2 recurrent AF episodes spontaneously terminating within 7 d. Exclusion criteria were: (1) contraindication to anticoagulation, ISP or ATP; (2) left atrial thrombus; and, (3) prior ablation in left atrium (LA).

Informed consent was obtained from each patient. All antiarrhythmic drugs except amiodarone were discontinued for ≥5 half-lives before ablation. Transesophageal echocardiography was performed on the day before ablation to rule out left atrial thrombus. All procedures were performed under conscious sedation with fentanyl and midazolam.

CS catheter was placed between the left inferior pulmonary vein (LIPV) and mitral annulus to record the CS and LA. Immediately after successful transseptal puncture, intravenous heparin was given as a 5000 U bolus followed by 1000 U/h during the remainder of the procedure. After selective PV angiography, multipolar circular (Lasso™, Biosense Webster, Diamond Bar, CA, USA) and ablation (Navi-star Thermo-Cool, Biosense Webster) catheters were positioned at the right superior PV (RSPV) and left superior PV (LSPV) ostia, respectively, or into the inferior PVs if suspected as ectopic focus (Fig. 1). 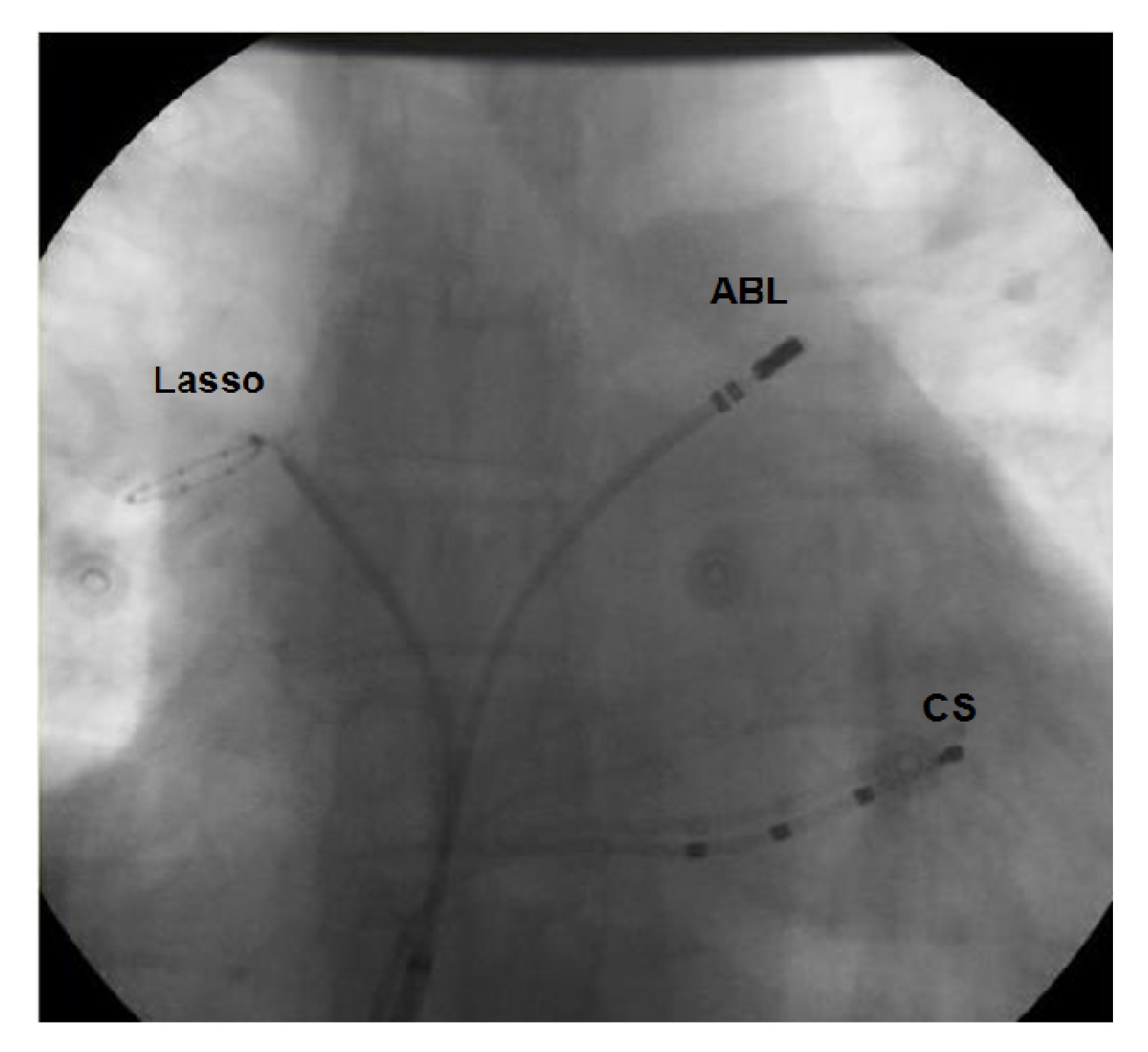 Fig.1
Fluoroscopy showing catheter location during inducement
Lasso: circular mapping catheter; ABL: ablation catheter; CS: coronary sinus
Ten of the 80 patients were in AF at procedure onset, while the other 70 had sinus rhythm (SR). ATP (20 mg) was rapidly injected intravenously during continuous infusion of ISP (20 μg/min) to induce AF, and repeated if no AF was induced. The ectopic focus was localized according to the earliest atrial activity relative to reference electrogram or ectopic P wave onset.

Circumferential PV isolation (CPVI) was then performed, guided by the Lasso catheter and electroanatomic mapping system (CARTO™, Biosense Webster). Radiofrequency energy was delivered at 5–10 mm from the PV ostia at 45 °C (power: 25–35 W; irrigated flow rate: 17–25 ml/min). The endpoint was electrical isolation of all PVs with circular mapping catheter within circumferential lines showing no PV potential or presence of dissociated PV potential. The details of the techniques were described as before (Jiang et al., 2014).

In patients with SR after successful CPVI, ISP+ATP was administered again to provoke AF; non-PV areas, including CS, SVC, left atrial wall, LOM, right atrium (RA), and interatrial septum, were mapped. In patients who remained in AF after CPVI, empirical ablation was performed at sites with the shortest cycle length, the potential driver for AF, ATP+ISP induction was repeated, and procedure endpoint was no AF induced by ISP+ATP (Fig. 2). 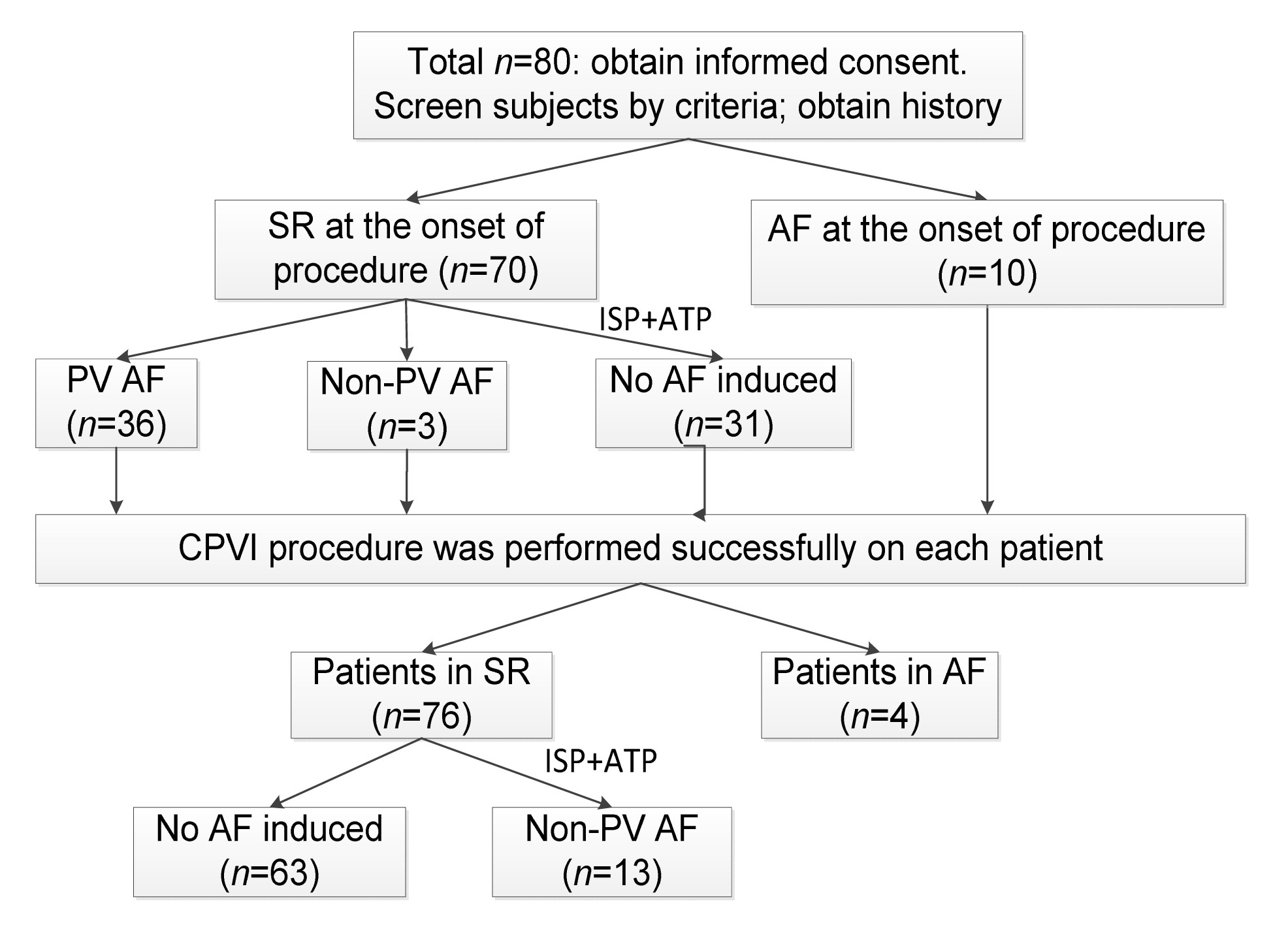 Fig.2
Flowchart of study design and results
Patients with induced AF were divided into two groups according to AF origin, either PV trigger(s) only (group P) or non-PV foci (group N).

Patients were followed up at 1, 3, 6, 12, and 24 months post-ablation. Warfarin was taken at least 3 months after the procedure. The target value of international normalized ratio (INR) was between 2 and 3. All antiarrhythmic drugs (AADs) were discontinued at three months post-procedure. Twelve-lead electrocardiograph (ECG) and 24-h Holter ECG recordings were performed at each follow-up visit, and at any time symptoms were suggestive of arrhythmia. AF recurrence was defined as >30 s of documented AF, atrial flutter, or atrial tachycardia. The first 3 months were taken as the blanking period.

All continuous variables are presented as mean±standard deviation (SD), and were analyzed with Student’s t-test. Categorical variables are presented as numbers and percentage, and were compared with the chi-square test or Fisher’s exact test. Kaplan-Meier survival curve and the log-rank test were used to describe and compare rates of freedom from recurrent AF. P≤0.05 was considered statistically significant. Statistical analyses were performed using SPSS Statistics 16.0 software.

Among the 80 patients studied, 49 patients had AF induced with ATP+ISP administration: 32 from PV foci (Group P) before and after CPVI, and 17 from non-PV foci (Group N). There were no significant baseline differences between the two groups (Table 1).

Before PV ablation, 70/80 patients were in SR, and AF was induced in 39 patients: 36 originating from PV (left PV 20, right PV 16), and 3 from non-PV foci. In these three patients with non-PV foci before CPVI, earliest atrial activities were recorded at proximal of CS catheter.

CPVI was successfully achieved in all patients. Four patients remained in AF rhythm after CPVI. Non-PV areas were mapped, AF cycle-length was measured, and ablation was performed at suspected AF origin sites. Three patients had AF terminated during ablation, including one at CS ostium and two at the left atrial anterior wall. One patient remained in AF despite additional ablation and received cardioversion.

Of 76 patients with SR post-CPVI, AF was induced in 13 by ATP, all originating from non-PV areas (13/76 vs. 3/70; P=0.016, as compared with the incidence before CPVI; Fig. 3) including SVC (5/13), CS ostium (5/13), left atrial free wall (1/13), and unknown (2/13). All areas located were successfully ablated and reconfirmed with ATP+ISP provocation (Figs. 4–6). Non-PV foci defined as unknown were difficult to locate in two patients: one only had a short AF episode induced and the other had sustained AF induction but could not be terminated by empirical ablation. 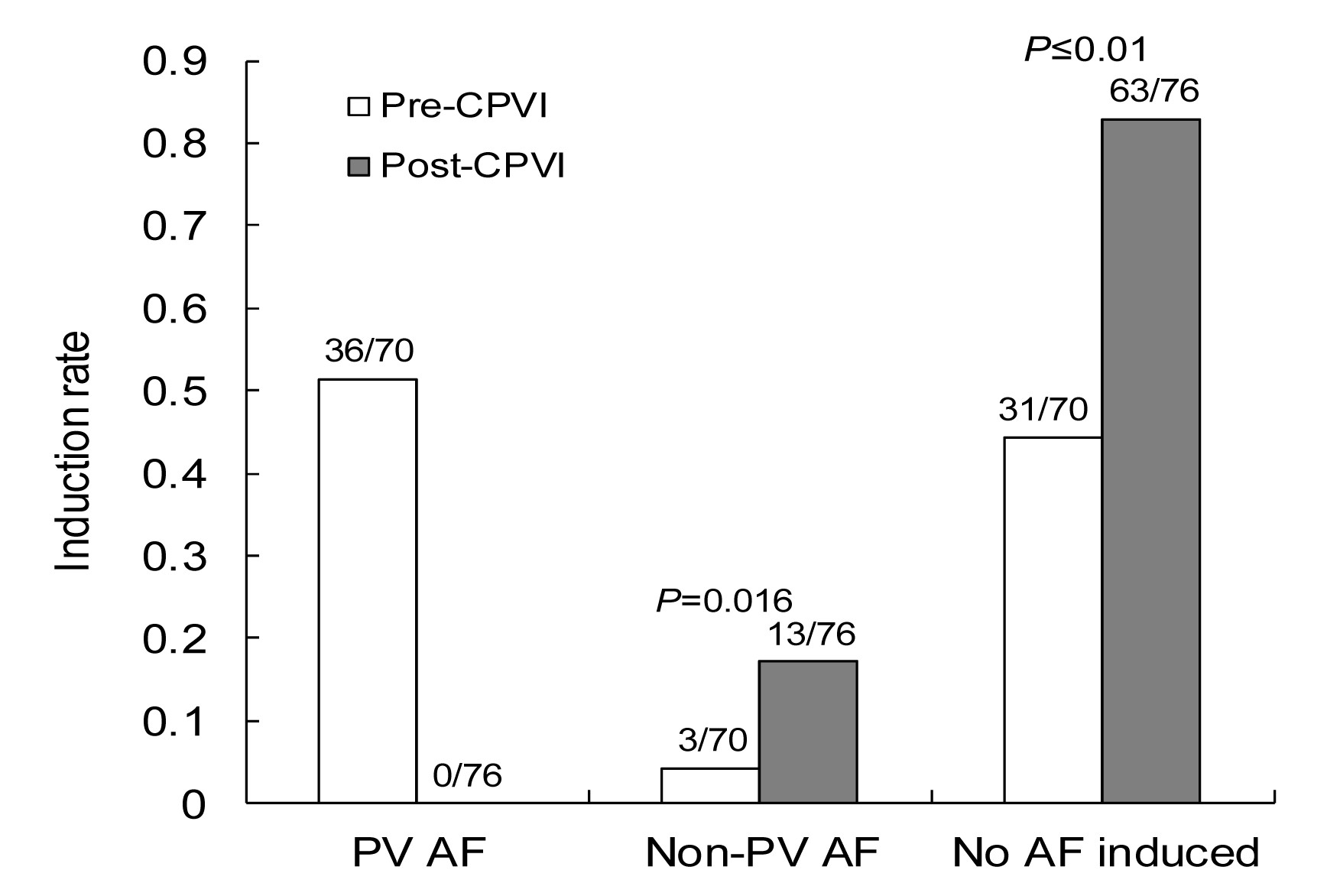 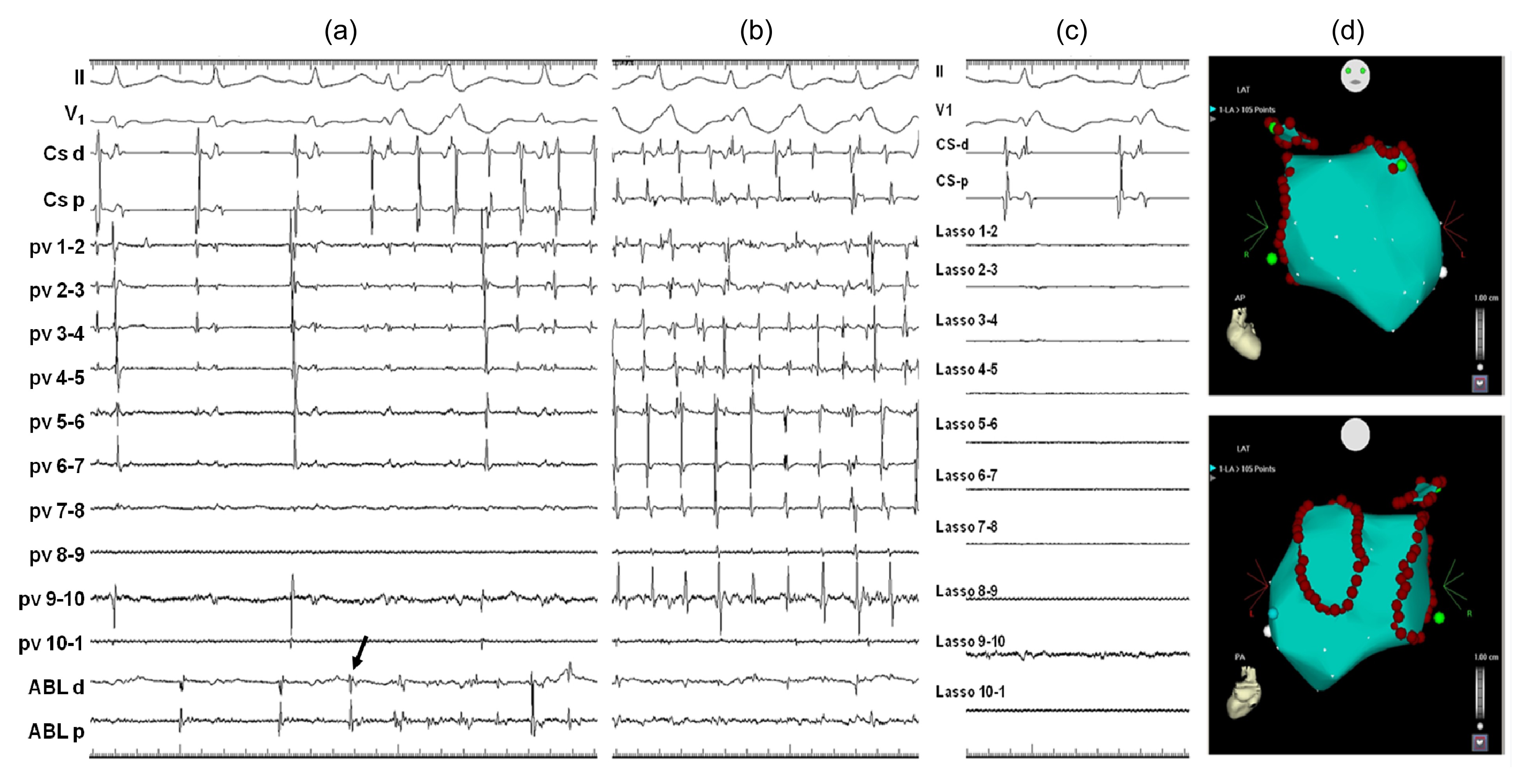 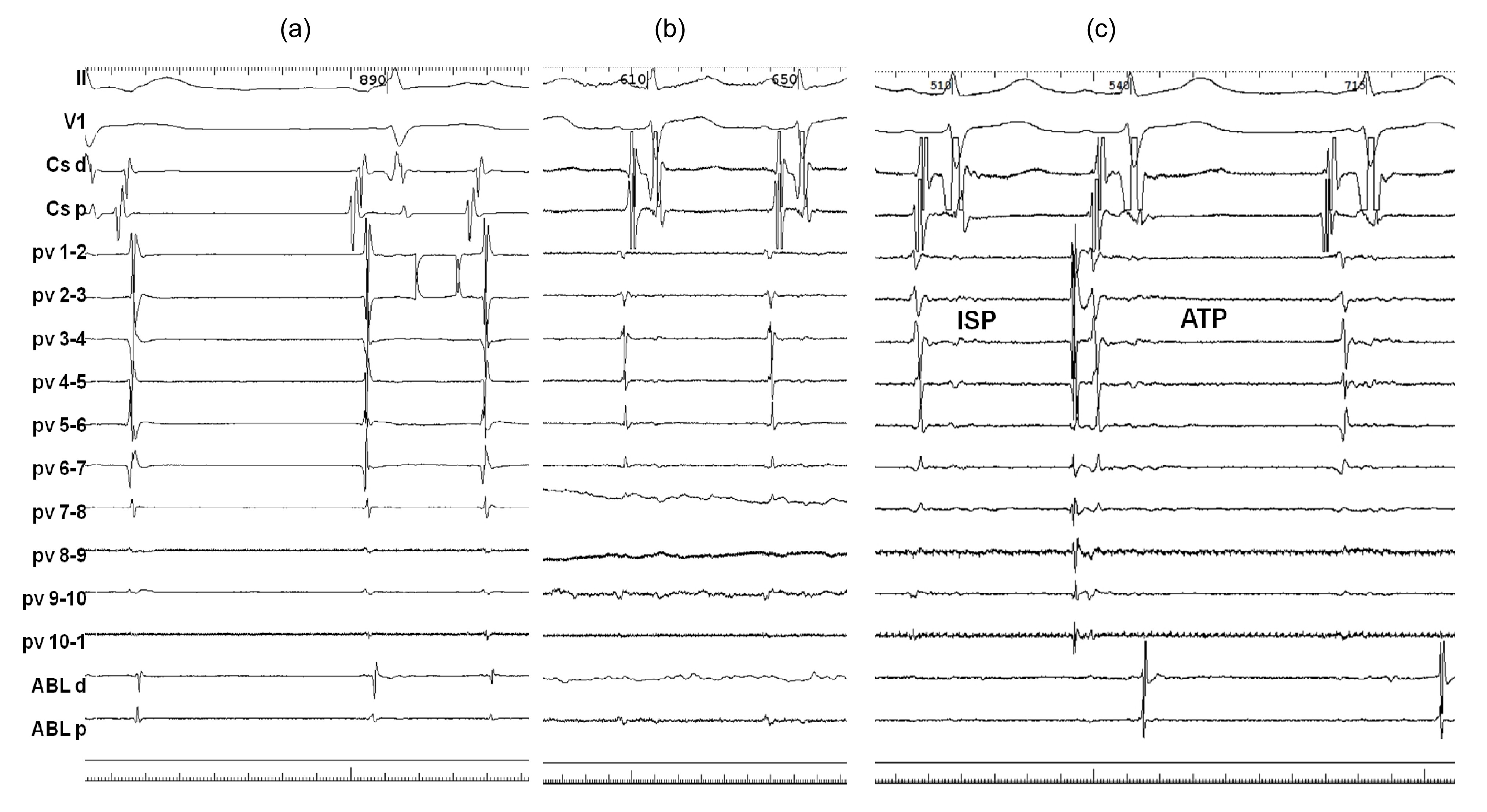 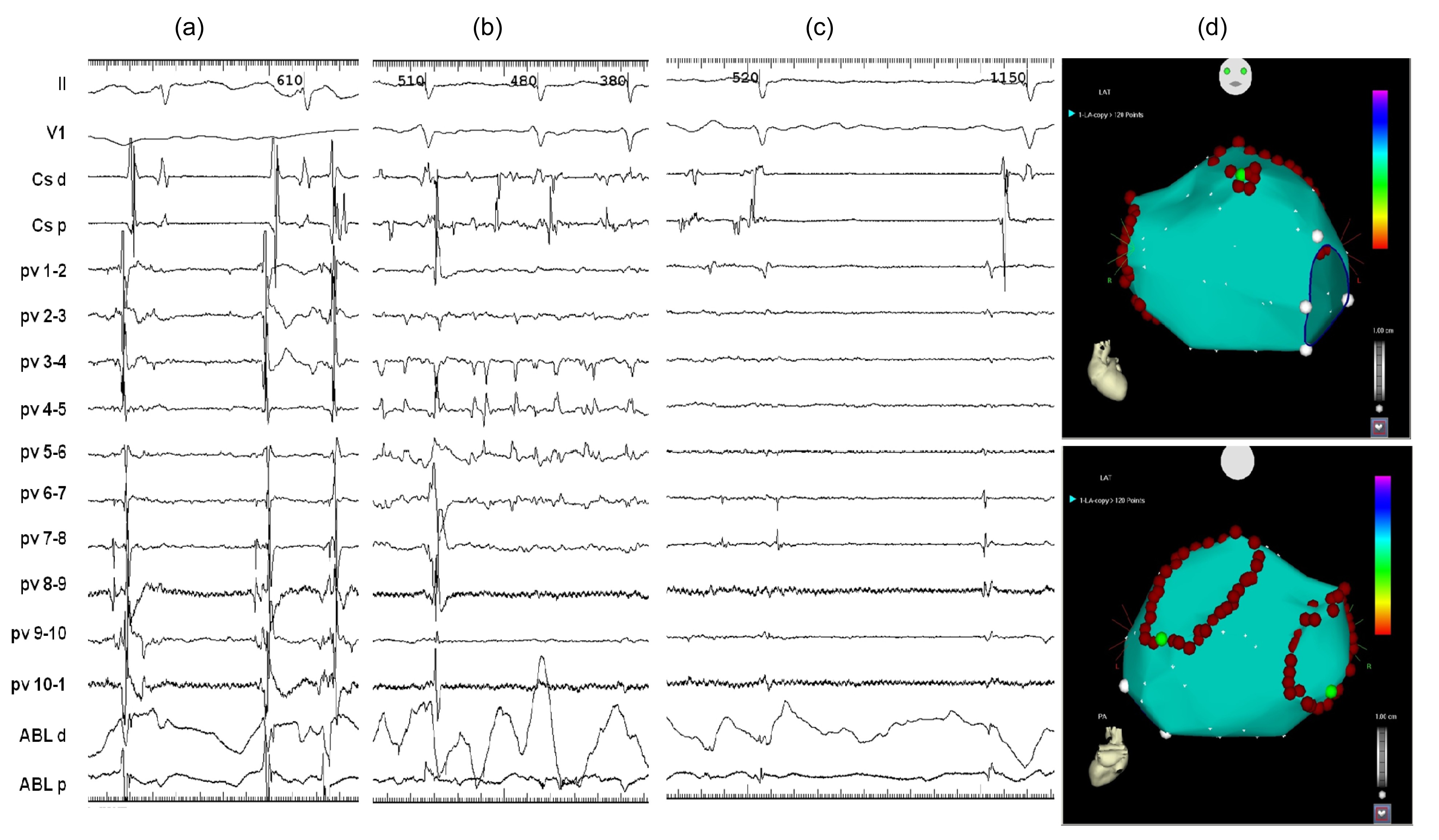 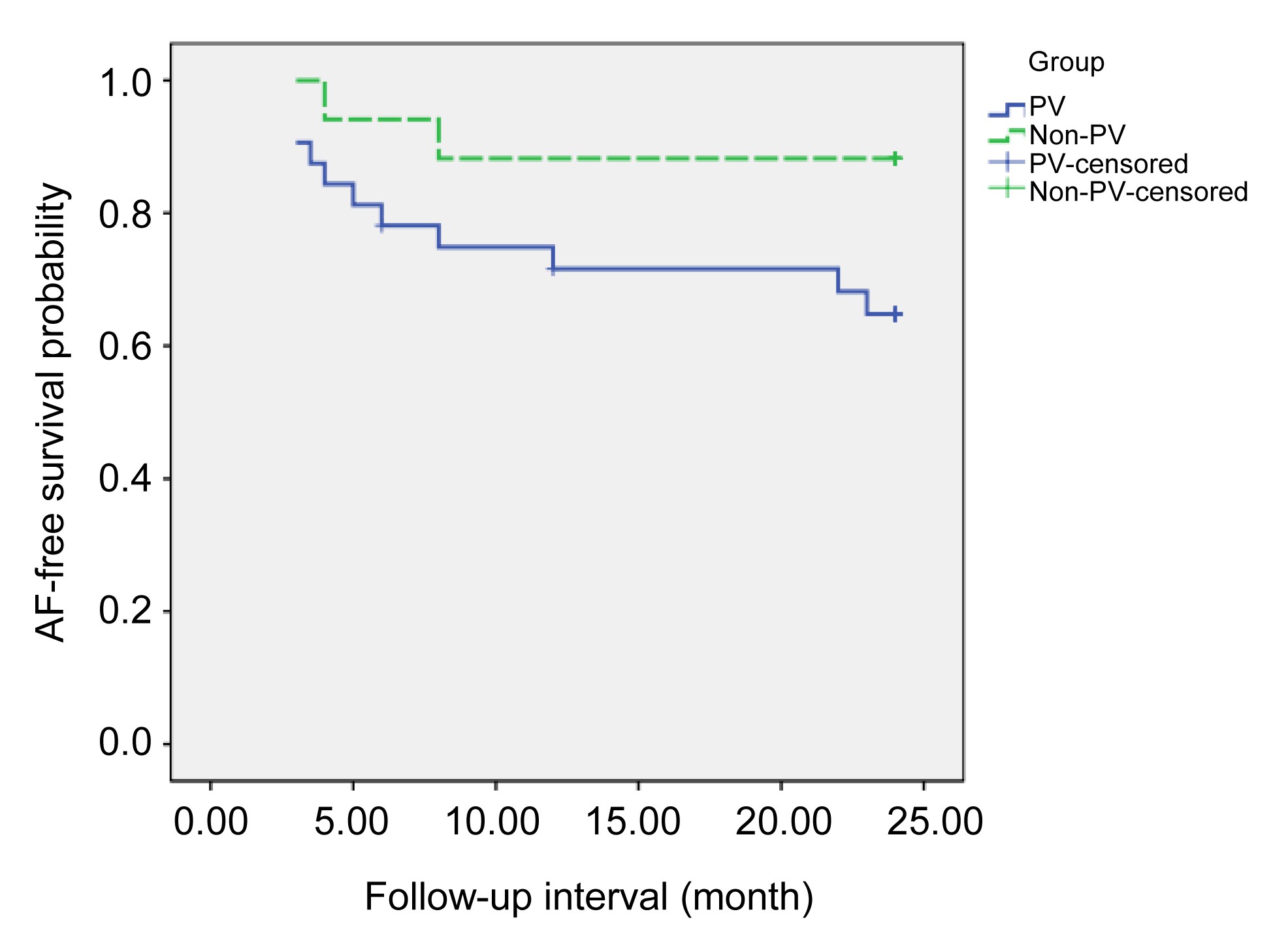 In this study, 3 patients had non-PV foci-initiated AF induction before CPVI, and 13 after CPVI. Although prior to PV isolation PVs played a predominant role in AF induction, PVI markedly suppressed PV rapid firing but enhanced inducibility of non-PV AF, albeit in a lower percentage of patients. With additional ablation, patients with non-PV foci had a numerically but not significantly lower clinical AF recurrence rate as compared to those with only PV foci.

4.2.  Incidence of AF before and after CPVI

AF is a complex arrhythmia with multiple possible mechanisms (Allessie et al., 2001). The concept that the onset and maintenance of AF require both a trigger and a substrate was well accepted. Ectopic foci occurring in muscular sleeves of PV or vena caval junctions were considered as critical AF triggers (Haïssaguerre et al., 1998; Lin et al., 2003). Self-perpetuation process of AF including structural (atrial fibrosis, dilation, etc.) and electrical (shortening and dispersion of refractory periods) remodeling would be the substrate that sustains arrhythmia (Morillo et al., 1995; Wijffels et al., 1995; Goette et al., 1996).

The findings described above could be supported by the marked suppression seen in PV-originated firing after CPVI. However, inducibility of non-PV AF was enhanced and non-PV foci were unmasked after PVs were isolated or irritated by substrate modification around PV ostia.

In the human heart, there are four major LA ganglionated plexi (GPs) located around the antrum of PVs, which are areas of high-density autonomic innervation. GPs receive input from the central autonomic nervous system, contain afferent and efferent neurons, and communicate with each other (Armour et al., 1997). Extra-PV foci may be irritated after the pathway between GPs and myocardial sleeves around PV is blocked.

Besides autonomic innervation abundance around thoracic veins favoring ectopic beat origination, the myofascial architecture at the venoatrial junction is also the ideal substrate for reentry during AF initiation. Muscular discontinuities and abrupt changes in fiber orientation are found in more than 50% of PVs and PV-LA junction. Muscular sleeves around SVC (Zipes and Knope, 1972) and CS musculature can also be the source of atrial tachyarrhythmia (Morita et al., 2012), which might explain why SVC and CS were dominant sites of non-PV AF induction after CPVI.

In our study, with additional non-PV foci ablation during the index procedure, patients with non-PV foci had a numerically but not significantly lower clinical AF recurrence rate as compared to those with only PV foci. Inconsistent results in previous studies (Yamaguchi et al., 2010; Chang et al., 2013) might be secondary to differences at baseline, in AF type and provocation methods, and among others. As is the case for PV isolation procedure, supplementary ablation for some non-PV foci is an empirical therapy, and some non-PV firing may be an epiphenomenon of a real source located in the LA. More appropriately powered clinical studies are needed to evaluate the benefit of this strategy; by power calculation, 63 patients in each group would be needed to show a significant difference for the numerical difference observed between these two groups (α=0.05, 1−β=0.8).

Firstly, a controlled study could not be designed because it is unethical to set up a group in which non-PV foci are induced but not ablated; however, this nonrandomized study is prospective. Secondly, the study was limited by the relatively small sample size. Thirdly, we only positioned catheters in the LSPV and RSPV because of limited transseptal access to the LA. Lastly, asymptomatic AF episodes might have been missed during follow-up even though ECG and 24-h Holter monitoring were performed on schedule.