Abstract: Cold-stretched pressure vessels from austenitic stainless steels (ASS) are widely used for storage and transportation of liquefied gases, and have such advantages as thin wall and light weight. Fatigue is an important concern in these pressure vessels, which are subjected to alternative loads. Even though several codes and standards have guidelines on these pressure vessels, there are no relevant design methods on fatigue failure. To understand the fatigue properties of ASS 1.4301 (equivalents include UNS S30400 and AISI 304) in solution-annealed (SA) and cold-stretched conditions (9% strain level) and the response of fatigue properties to cold stretching (CS), low-cycle fatigue (LCF) tests were performed at room temperature, with total strain amplitudes ranging from ±0.4% to ±0.8%. Martensite transformations were measured during the tests. Comparisons on cyclic stress response, cyclic stress-strain behavior, and fatigue life were carried out between SA and CS materials. Results show that CS reduces the initial hardening stage, but prolongs the softening period in the cyclic stress response. Martensite transformation helps form a stable regime and subsequent secondary hardening. The stresses of monotonic and cyclic stress-strain curves are improved by CS, which leads to a lower plastic strain and a much higher elastic strain. The fatigue resistance of the CS material is better than that of the SA material, which is approximately 1×103 to 2×104 cycles. The s-N curve of the ASME standard for ASS is compared with the fatigue data and is justified to be suitable for the fatigue design of cold-stretched pressure vessels. However, considering the CS material has a better fatigue resistance, the s-N curve will be more conservative. The present study would be helpful in making full use of the advantages of CS to develop a new s-N curve for fatigue design of cold-stretched pressure vessels.

Investigations of the effects of CS on ASS fatigue behaviors have been carried out at different temperatures, CS levels, CS methods, and specimens’ cross sections (Zeedijk, 1977; Rao et al., 1993; Bergengren et al., 1995; Ganesh Sundara Raman and Padmanabhan, 1996; Johansson and Nordberg, 2002; Hong et al., 2003; Hong, 2004; Hong and Lee, 2004; Srinivasan et al., 2004; Nakajima et al., 2010; 2011). After CS, better fatigue resistances have been reported at different strain amplitudes. Martensite transformations have been detected during cycling, making an important contribution to fatigue properties. Fatigue behaviors, such as cyclic stress response and cyclic stress-strain curve, have been described and analyzed, but little was mentioned about fatigue design methods for pressure vessels, such as the S-N curves. Different temperatures, CS levels, and CS methods lead to different fatigue behaviors and results. For cold-stretched pressure vessels in China, a 9% CS level is commonly employed and carried out by CS parallel to the rolling direction at room temperature. Dog bone-shaped specimens are usually used in fatigue tests. These are not covered by prior research. In addition, fatigue design S-N curves are very concerned for pressure vessels.

This study focuses on cold-stretched pressure vessels in China. Detailed research was performed on a commercial industrial ASS material grade EN 1.4301 (equivalents include UNS S30400, AISI 304) in solution-annealed (SA) and CS conditions. The 9% CS level is introduced on the ASS material by tension. Dog bone-shaped specimens are used to perform fatigue tests. Low-cycle fatigue (LCF) properties responding to the 9% CS level at room temperature are studied. Cyclic stress response (CSR), cyclic stress-strain curve (CSSC), and fatigue life are exhibited to reveal the effect of CS. These fatigue data are compared with the S-N curve of ASME standards.

A commercial industrial ASS grade EN 1.4301 was selected for this investigation. It was delivered in the form of a 16 mm-thick plate under a hot-rolled and SA condition. Its chemical composition is shown in Table 1. The samples with dimensions of 16 mm×16 mm×200 mm were machined from the plates and then cold-stretched to a 9% total strain, with the longitudinal axis parallel to the rolling direction. CS was carried out with a quasi-static rate of 1×10−4 s−1. Then, the dog bone-shaped specimens with a gauge diameter of 6 mm and a gauge length of 12 mm were fabricated for both SA and CS conditions. To compare with previous results (Zeedijk, 1977; Rao et al., 1993), M D30 was calculated and listed in Table 1, where M D30 is the temperature at which 50% (in volume) strain-induced martensite transformation will occur in material after 30% stretching. Note that the ASS shows a higher M d30, which means that the ASS is more unstable and is likely to generate more martensite.

Chemical composition and M D30 of the tested material

LCF tests were conducted in air under a fully reversed and total axial strain control in an MTS 810 servo-hydraulic testing machine. A symmetrical, triangular strain-time wave form was used. These tests were performed at room temperature based on the test standard ASTM E606, with strain amplitudes ranging from ±0.4% to ±0.8% at a constant strain rate of 4×10−3 s−1. The tensile tests were carried out in the same machine with the same strain rate. Strain was detected using an MTS extensometer.

The variation in martensite transformation during cycling was observed. The ferrite-scope (model FMP30, Helmut Fischer GmbH +Co., Germany) was employed to measure the content of transformation. The results were presented by ferrite number (FN).

The CSR curves of SA and CS conditions are illustrated in Fig. 1. As shown in Fig. 1a, the CSR of the SA material exhibits a relatively long period of cyclic hardening and reaches a maximum stress value at an early stage (within 5 to 20 cycles). After cyclic hardening, a prolonged softening regime is observed. A short stable stress response follows, and then a strong secondary hardening stage appears. Finally, failure happens. Compared with the CSR of the SA material, the CSR of the CS material shows a similar response, but has a shorter period of initial hardening and a longer softening regime. The stress responses of both SA and CS materials improve with an increase in strain amplitudes. Fig. 1 shows that the CSR in CS 1.4301 are higher than that displayed by the SA material at the same strain amplitudes. 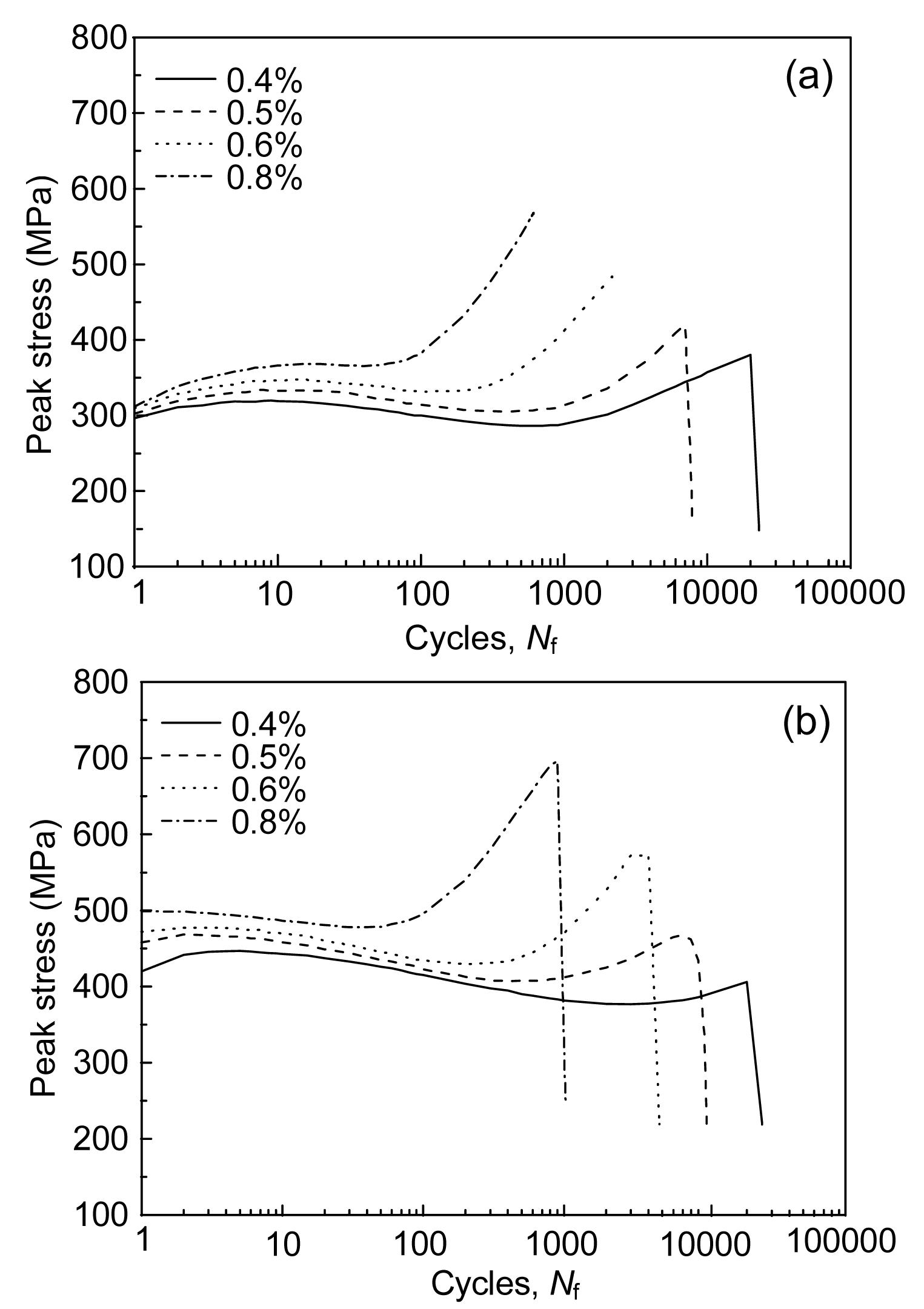 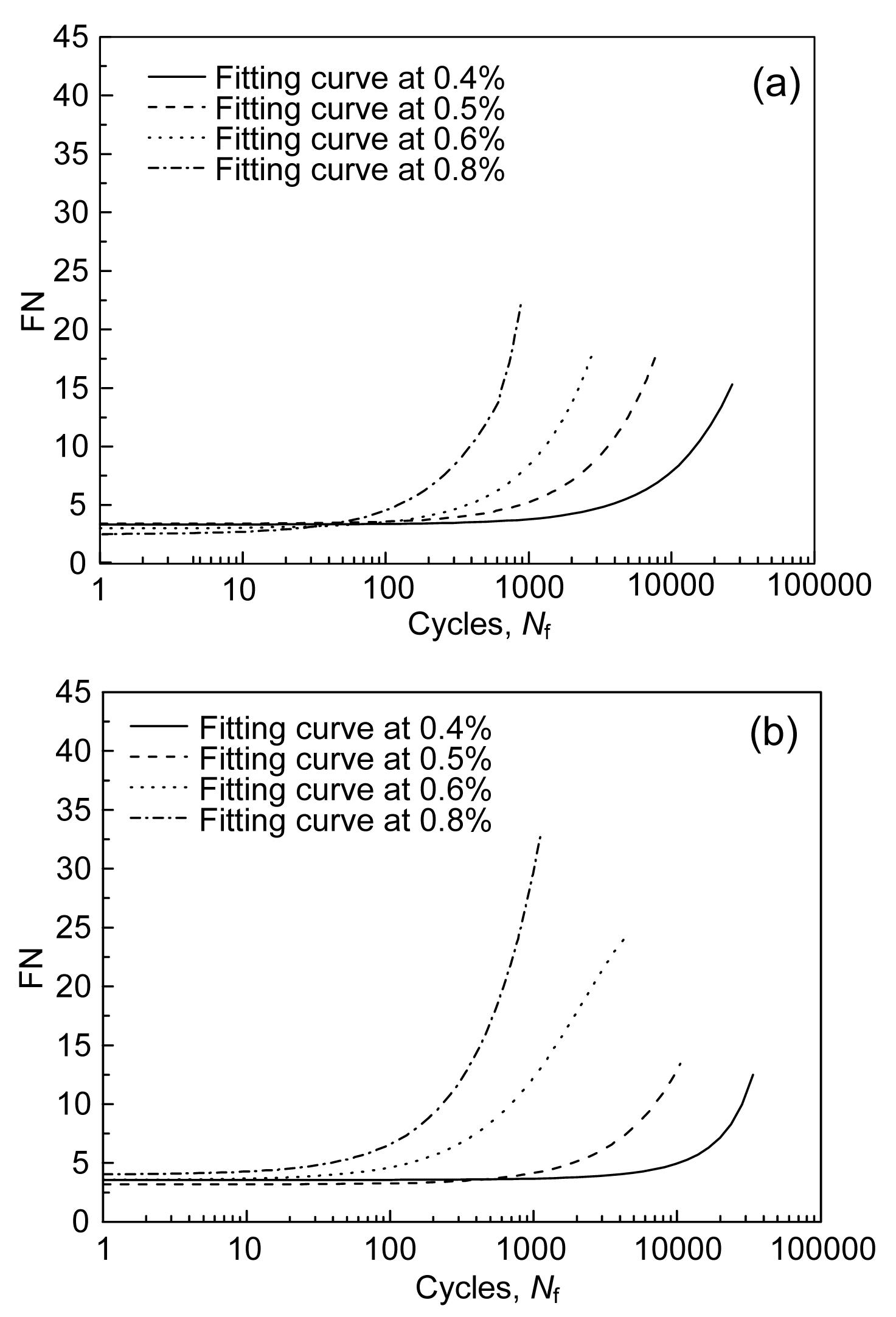 Table 2 shows the tensile properties of ASS 1.4301 in SA and CS conditions at room temperature. These properties reveal that both yield strength (YS) and ultimate tensile strength (UTS) increase after CS. The increase of UTS is much lower than that of YS. Ductility (percentage elongation to fracture) decreases after CS, whereas reduction in area (RA) and true fracture strain ε f (deduced by RA) exhibit a slight increase. A similar increase in YS and UTS was also reported in other research (Rao et al., 1993; Hong et al., 2003), which was mainly attributed to strain-induced martansite during CS.

Tensile properties of ASS 1.4301 in SA and CS conditions at room temperature
Fig. 3 shows both monotonic stress-strain curve (MSSC) and CSSC of the SA and CS materials. CS is conducted in the tensile tests, leading to high stresses in the MSSC of the CS material. Both MSSC and CSSC are raised by CS to a higher level, although the stress difference between SA and CS conditions in CSSC is reduced compared with that of MSSC, which has suggested (Rao et al., 1993) that the effect of strengthening in monotonic strength properties induced by CS could not be retained fully under fatigue conditions. 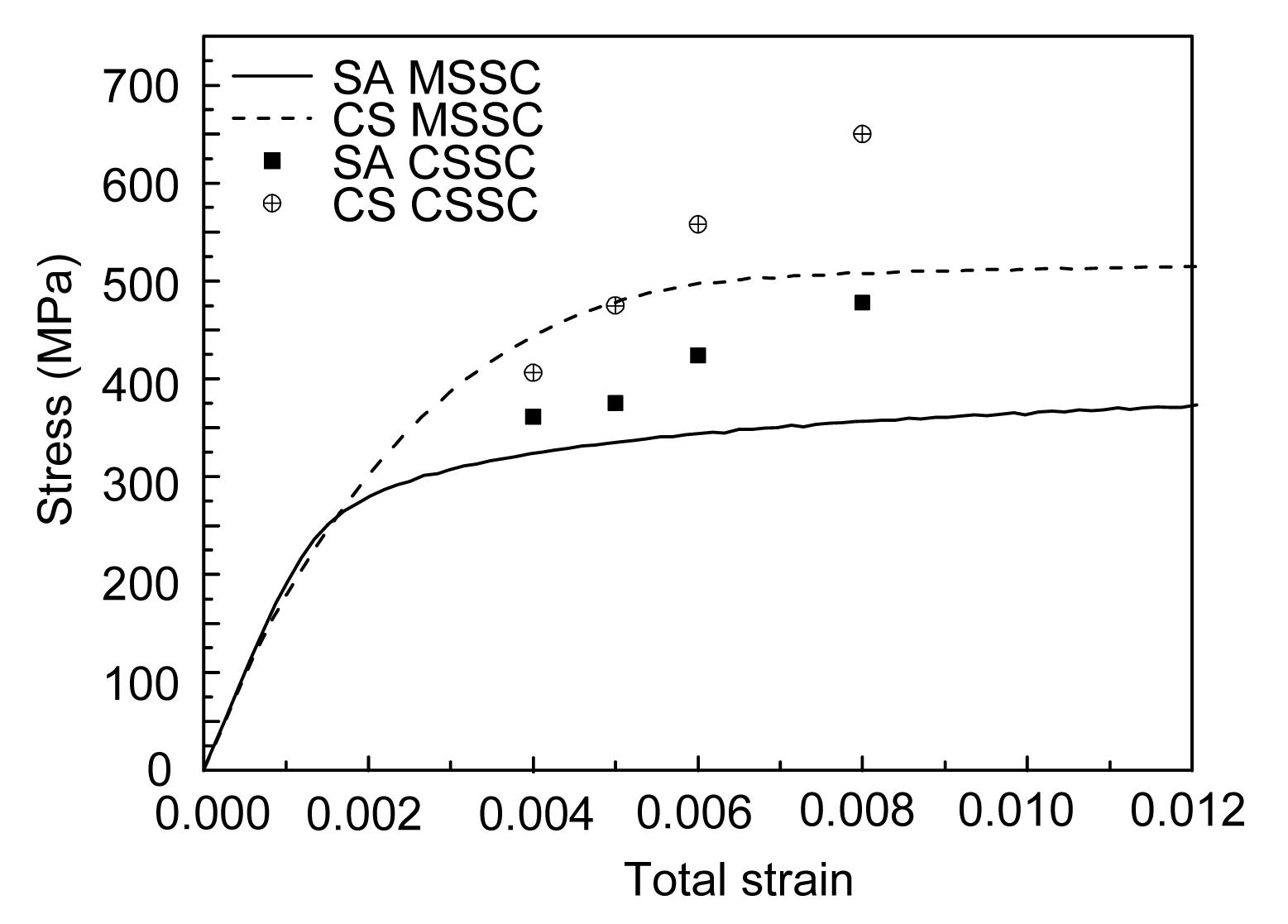 LCF properties of both SA and CS materials at room temperature
The variation in fatigue life, with total, plastic, and elastic strain amplitudes in SA and CS conditions, is shown in Fig. 4. It shows that CS improves fatigue resistance in a strain range of ±0.4% to ±0.8%. Similar effects of CS on fatigue life were reported (Rao et al., 1993; Bergengren et al., 1995; Ganesh Sundara Raman and Padmanabhan, 1996; Johansson and Nordberg, 2002). Transition fatigue life is determined by the intersection between Δε p/2–N f and Δε e/2–N f curves, and is shorter in CS condition than in SA condition. 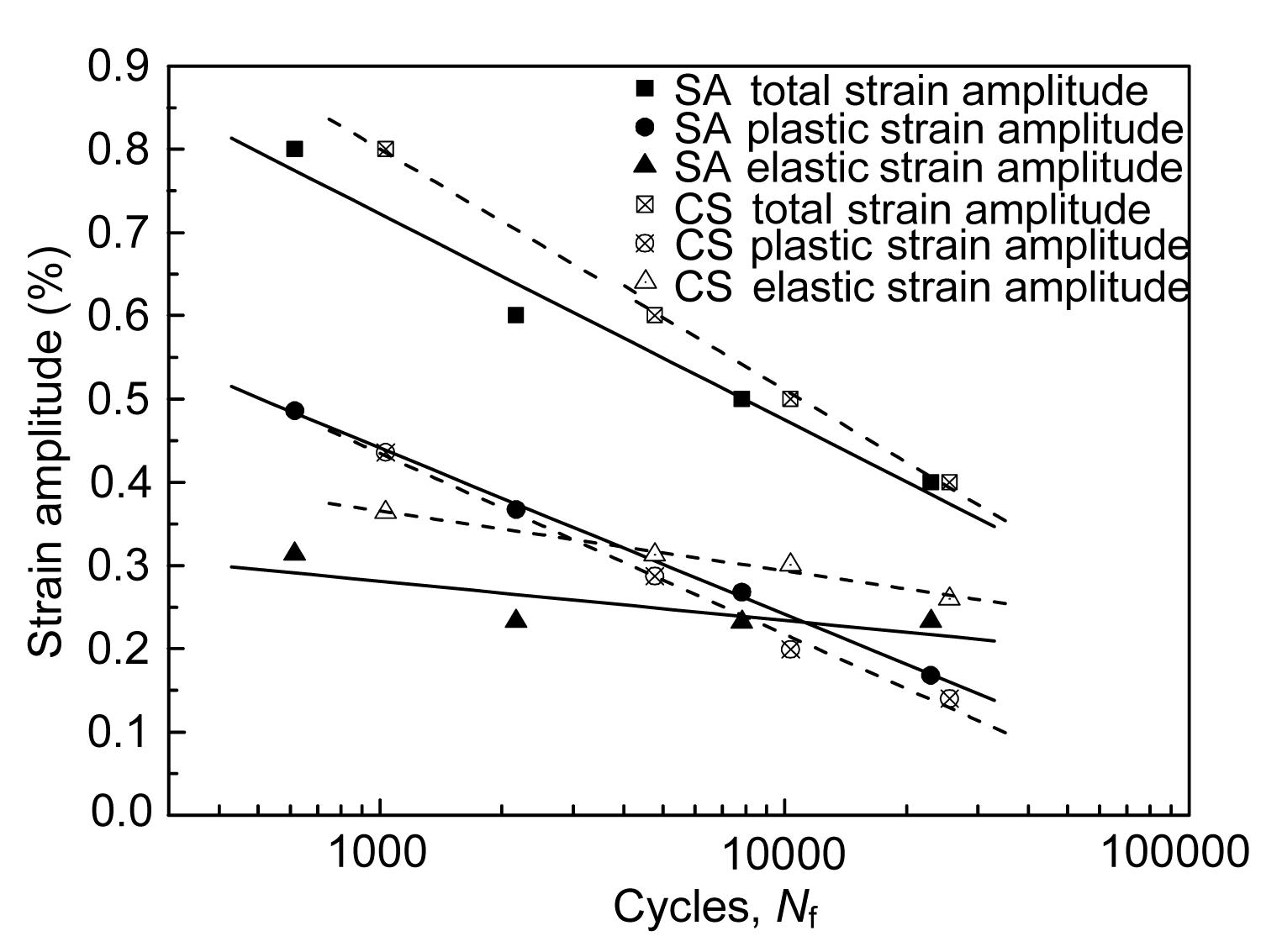 Fig. 5 shows the comparison between the CSR of SA and CS materials at ±0.5% strain amplitude, with a corresponding cyclic martensite transformation. The CSR of both materials comprises four stages, namely, initial hardening, softening, saturation (the stable regime), and secondary hardening. Cyclic softening is pronounced in the whole stress response and was reported earlier (Rao et al., 1993). Cyclic softening is considered as a recovery process induced by cyclic strain, which leads to low energy dislocation structures characterized by cells and sub-grains (Laird et al., 1989). The softening of cold-worked materials and those having high initial dislocation densities occurs when the annihilation rate of dislocation is greater than the generation rate, causing a net decrease in dislocation densities, or when the rearrangement of the dislocations takes place into cellular structure, resulting in an increase in the mean free path for dislocations (Feltner and Beardmore, 1970). This explanation can also account for the observed softening at present. 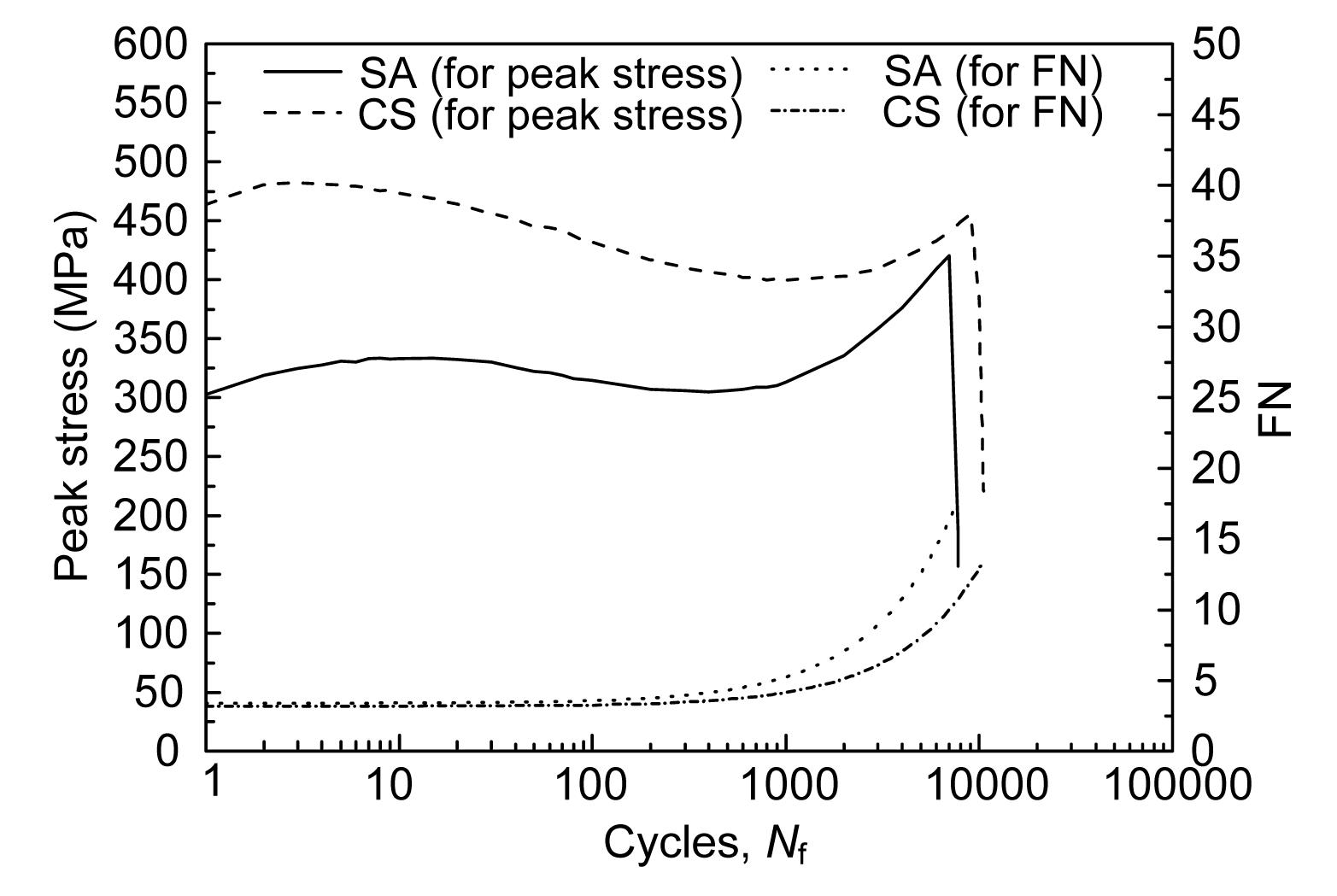 CS is found to affect the CSR to some extent. In Fig. 5, at ±0.5% strain amplitude, CS decreases the range of the initial hardening and the secondary hardening, and lengthens the softening process. However, CS still improves the whole stress response. Higher pre-deformation levels could lead to cyclic softening beginning with the first cycle and onward, whereas lower pre-deformation levels could cause initial hardening prior to softening (Srinivasan et al., 2004). This could also be proven by comparing the CSRs of the SA and the CS at ±0.8% strain amplitude. Furthermore, CS appears to delay the secondary hardening.

4.2.  Effect of CS on stress-strain curves

Rao et al. (1993) found that CS reduced total strain fatigue resistance at large strains, with 304 at room temperature, but seemed to improve resistance beyond 2×104 reversals (at about ±0.3%). Bergengren et al. (1995) found that CS made resistance better after about 1×104 cycles (at about ±0.35%) for 304. Johansson and Nordberg (2002) found that fatigue life was better between approximately 7×103 and 1×106 cycles for 1.4301. These are different from the results of this study, which indicates that fatigue resistance is better in CS condition than in SA in the range of 1×103 to 2×104 cycles (from ±0.4% to ±0.8% strain amplitudes). This difference, as well as that in the CSRs, may be caused by the difference in the factors mentioned before, such as specimens’ cross sections, CS levels, and CS methods. In addition, the chemical composition and the manufacturing technology of ASS may also have effects on that. 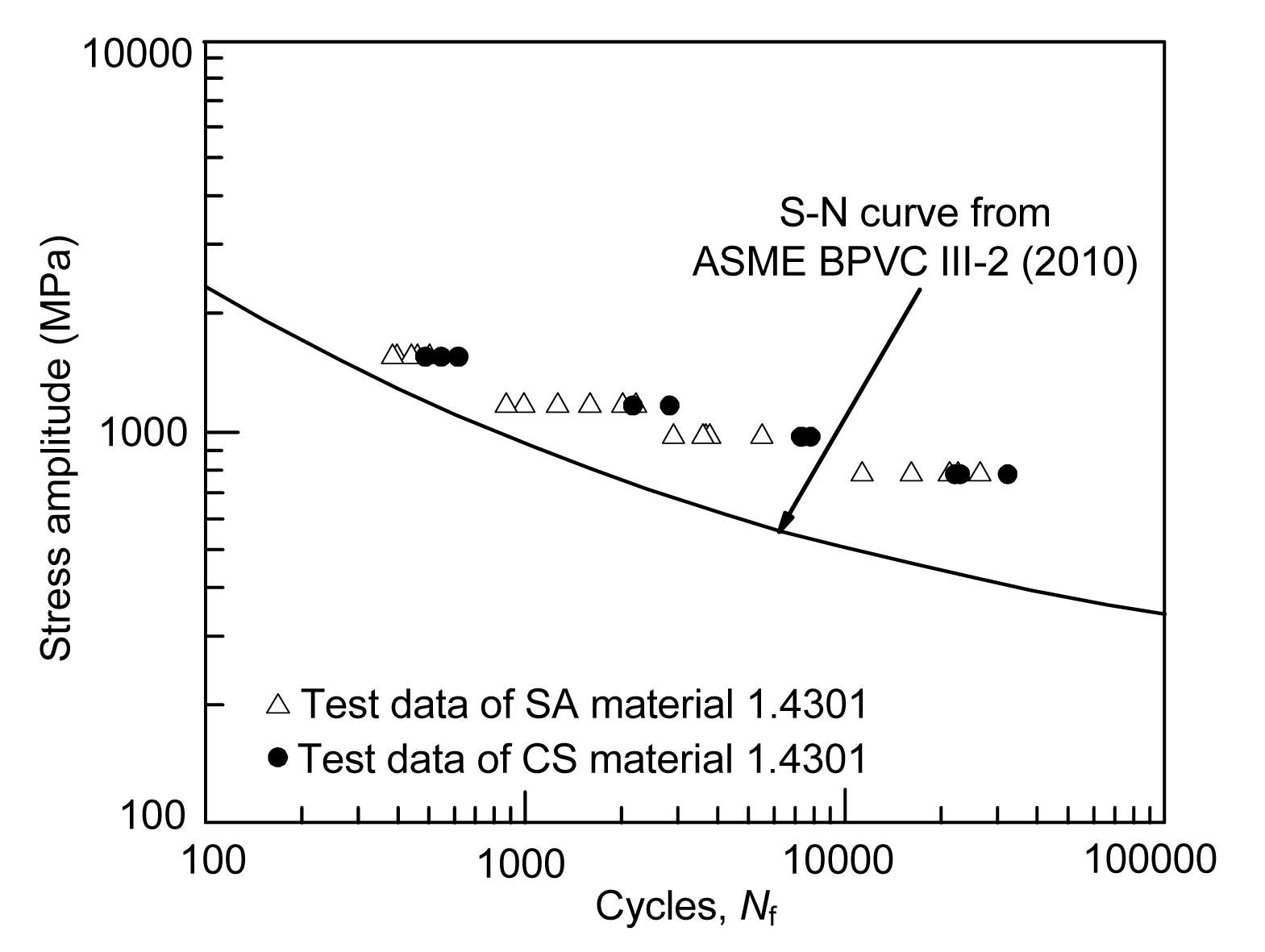 Based on the tensile test results, LCF tests and martensite content measurement for ASS EN 1.4301 in SA and CS conditions, as well as the effects of CS on fatigue properties, are discussed. The following conclusions are made:


*&nbspProject supported by the National Key Technology R&D Program (No. 2011BAK06B02-05), the International Science and Technology Cooperation Project (No. 2010DFB42960), and the Key Technology Innovation Team of Zhejiang Province (No. 2010R50001), China