Abstract: In this paper, a novel system using direct contact heat transfer between air and water solution was proposed to generate ice slurry. The heat transfer process and the system performance were studied; energy efficiency coefficients of 0.038, 0.053, and 0.064 were obtained using different solutions. An empirical relationship between the volumetric heat transfer coefficient U v and the main parameters was obtained by fitting the experimental data. The U v calculated from the empirical formula agreed with the experimental U v quite well with a relative error of less than 15%. Based on the empirical formula, a laboratory-scale direct contact ice slurry generator was then constructed, with practical application in mind. If the air flow rate is fixed at 200 m3/h, the ice production rate will be 0.091 kg/min. The experimental results also showed that the cold energy consumption of the air compressor accounted for more than half of the total amount. To improve the system energy efficiency coefficient, it is necessary to increase the air pipes insulation and the solution’s thermal capacity, and also it is appropriate to utilize the free cold energy of liquefied natural gas (LNG).

Ice slurry is a mixture of liquid and ice crystals with diameters from 5 μm to 1 cm. In general, the liquid solution is a binary solution consisting of water and a freezing point depressant, such as ethylene glycol (EG), ethanol, and chloride. Due to its particular composition, ice slurry has excellent features including high cool-storage capacity, fast cool-release rate, and good fluidity. Moreover, it can be transported by pumps (Kalaiselvam et al., 2009). Therefore, ice slurry is a promising second refrigerant in various cooling processes, such as chemical, fishery and food industries (Tassou et al., 2010), central air-conditioning systems, and thermal energy storage systems (Wang and Kusumoto, 2001).

There are several methods of making ice slurry, such as the vacuum method, the fluidized bed method, the scrape method, the super-cooling method and the direct contact method. All methods have their own advantages as well as strict requirements and limitations in practical application (Kauffeld et al., 2010). A high level of airproofing and vacuumization is required for the vacuum method (Kim et al., 2001). High precision control of the surface temperature, the flow rate, and the solid particle size are required for the fluidized bed method (Meewisse and Ferreira, 2003). For the scrape method, the system where the scrape part is easily damaged is complex and of low energy efficiency (Chibana et al., 2002). Due to the unstable super-cooling state, a low ice content and poor stability are found in the super-cooling method. In the conventional direct contact ice slurry making system, the low temperature two-phase refrigerant (i.e., the dispersed phase) with a low temperature is injected from the nozzle into water (i.e., the con-tinuous phase). The refrigerant exchanges heat with the water by direct contact. The water temperature decreases till the ice crystals appear, while the refrigerant gets warmer and warmer till it vaporizes and flows out of the generator. However, in this system, some problems still exist, such as the large refrigerant consumption, the difficulty in separating the refrigerant from the water, and the ice blockage in the nozzle. To overcome the above weaknesses, Thongwik et al. (2008) used carbon dioxide as the dispersed phase, instead of the two-phase refrigerant. In their study, carbon dioxide was cooled and then injected into the water solution to make ice slurry. The effects of the mass flow rate, the inlet temperature of the dispersed phase, and the height of the continuous phase on the volumetric heat transfer coefficient (U v) were also experimentally studied.

Although much research has been carried out on direct contact heat transfer, work on the heat transfer process between cold gas and a water solution involving phase transition and ice slurry generation in the continuous phase, was only found in (Thongwik et al., 2008). Zhang et al. (2008; 2010a; 2010b) and Zheng et al. (2010) studied the effects of the mass flow rate, the nozzle diameter, and the gas inlet velocity on the volumetric heat transfer coefficient (U v), and found that the addition of ethylene glycol (EG) could prevent the ice blockage in the nozzle effectively.

In this paper, a direct contact heat transfer ice slurry making system was proposed, in which carbon dioxide is replaced by air as the dispersed phase, and a dimensionless relationship between the easily measured main factors and U v was obtained by fitting the experimental data. Then based on this empirical formula, a laboratory-scale direct contact ice slurry generator was constructed, with a view to practical application. 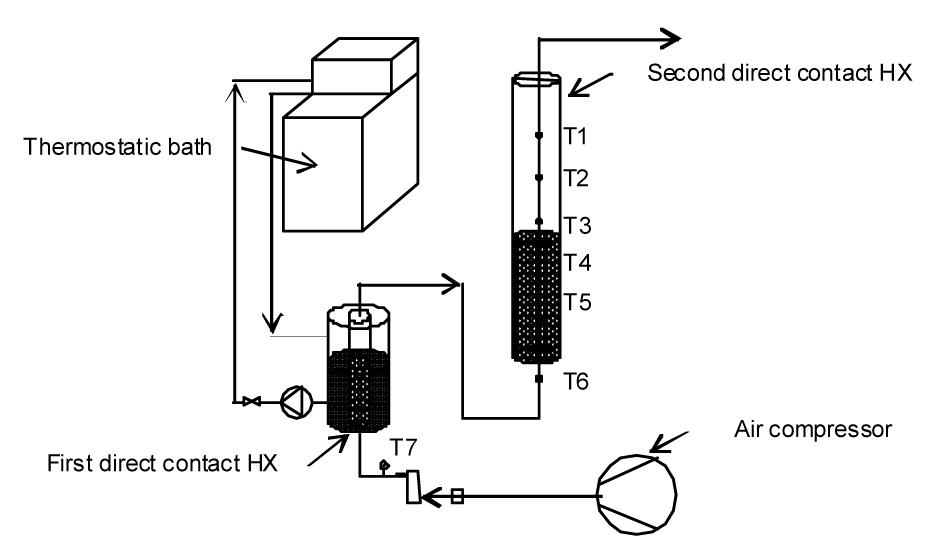 The generator consists of two synthetic glass tubes and a vacuumized interlayer between them for thermal insulation. Seven calibrated thermocouples (measurement accuracy: ±0.2 oC), denoted by T 1 to T 7, are fixed on the inner wall of the generator, as well as the pipes. The data logger is 34970A manufactured by the Agilent Technologies.

In one series of experiments, the temperature changes for both 5% and 10% EG aqueous solutions are shown in Fig. 2. 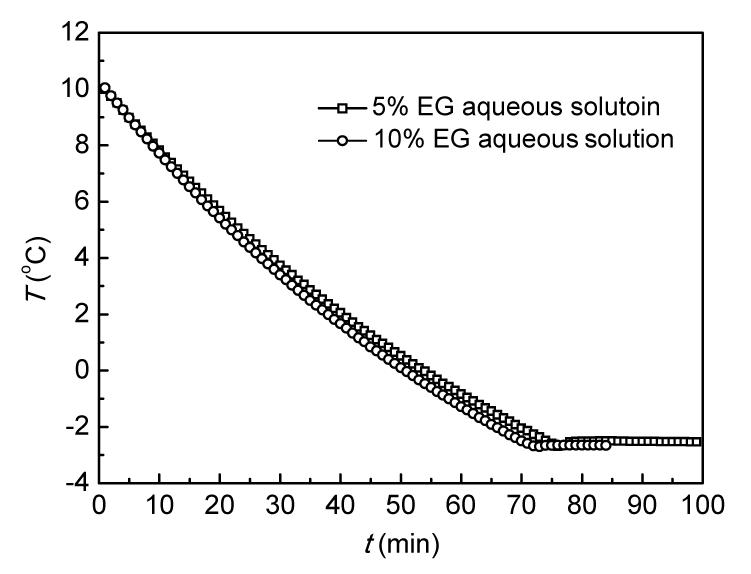 In the heat transfer process between the air bubbles and the water solution, the main factors that affect U v can be summarized as follows: the gas inlet velocity u i, the gas density ρ g, the liquid physical properties (constant pressure specific heat capacity c p, thermal conductivity λ, liquid density ρ l, viscosity υ, and surface tension σ), the nozzle diameter d n, the solution column height H, and the generator diameter D. Thus, U v can be expressed as

For nondimensionalization, Eq. (2) is hence converted to Eq. (3),

To simplify further, the last three items of Eq. (3) are combined to represent the solution’s Reynolds number (Re) and Prandtl number (Pr), as Eq. (4) expressed, where u i is regarded as the relative velocity of the solution to the gas.

Finally, the following dimensionless Eq. (5) is used to fit the experimental data. where a, b, c, d, and e are the pending coefficients; the first item on the right side is the ratio of the density of the air to the solution; the second item represents the structural parameters of the generator; and the last two items are Reynolds number and Prandtl number, respectively.

By measuring the air inlet and outlet temperatures, the water temperature, and the air mass flow rate, the volumetric heat transfer coefficient U v can be calculated by Eq. (1). Then the pending coefficients a, b, c, d, and e in Eq. (5) are obtained by nonlinear least squares regressions, as shown in Eq. (6).

By moving the D- and λ-term from the left side to the right side, Eq. (6) can be arranged as

To check the validity of Eq. (7), under the same experimental conditions, the volumetric heat transfer coefficient (U v) is calculated by Eq. (7), and plotted in Fig. 3. It is found that the calculation values agree well with the experimental results, and the maximum relative error is less than 15%. Therefore, Eq. (7) is used to design the direct contact ice slurry generator. 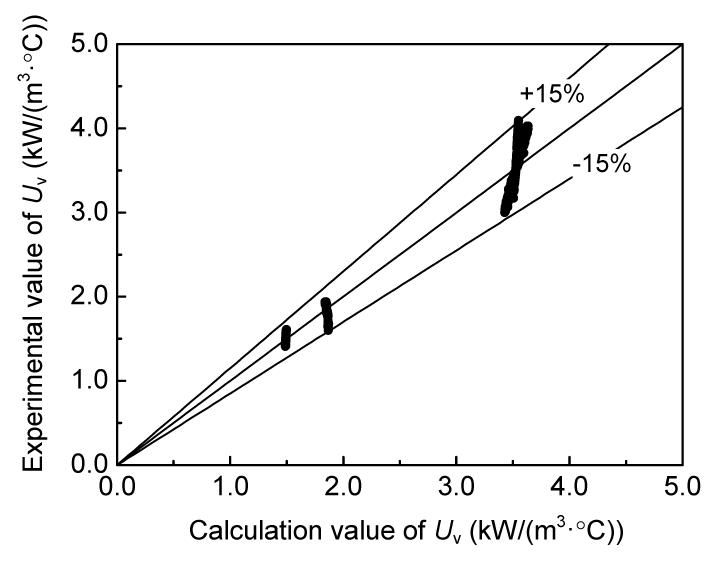 Aimed at practical application, a laboratory-scale ice slurry making system was constructed to study the ice formation process (Fig. 4). With the first direct contact heat transfer, air is pumped by an air compressor into the 35% EG solution cooled by a refrigeration system, and then injected from the nozzles at the spindle of the ice slurry generator into the 10% EG aqueous solution to make ice slurry with the second direct contact heat transfer. Air is exhausted from the top of the ice slurry generator, and re-enters the air compressor inlet to start the next cycle. 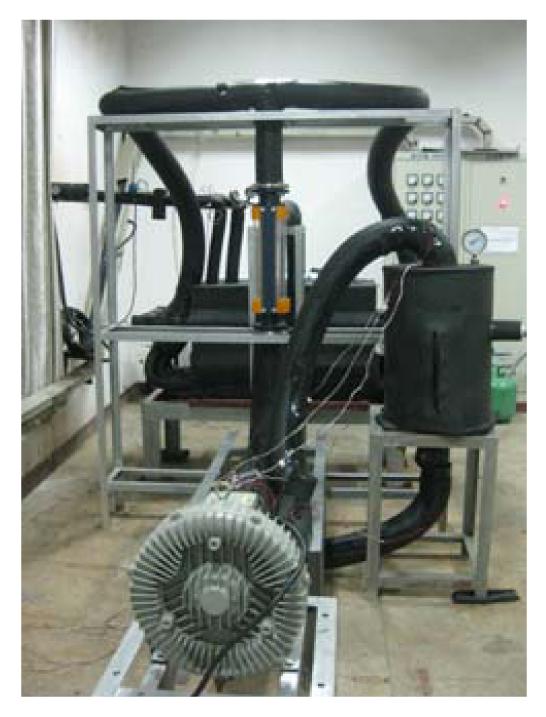 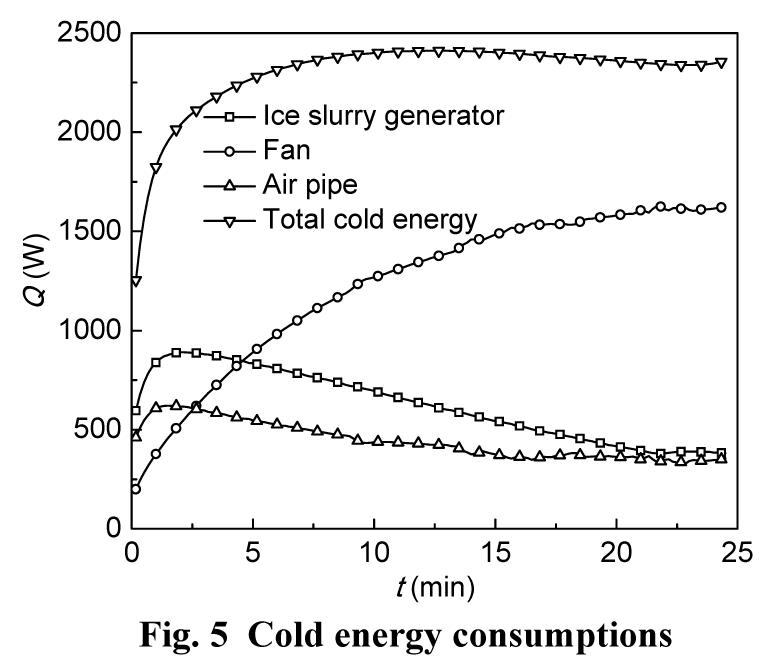 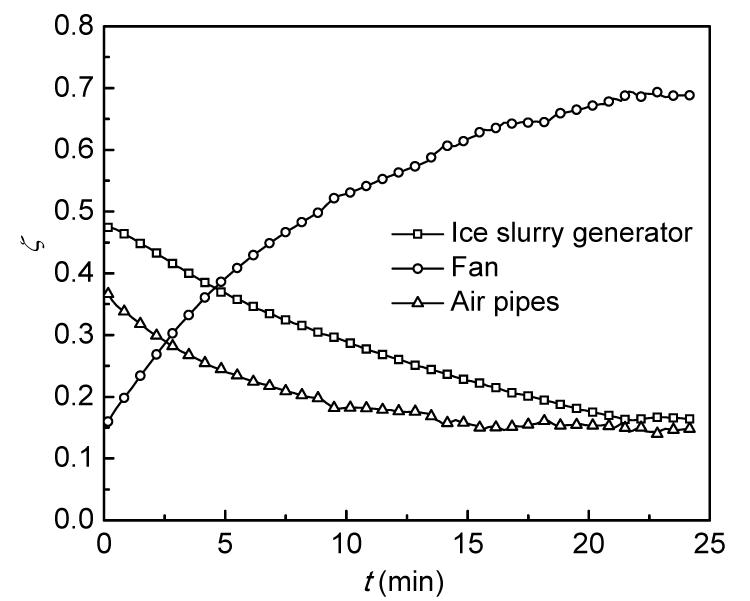 The electric energy consumption of the air compressor and the refrigeration system is measured by an electric meter, and recorded every 5 min. 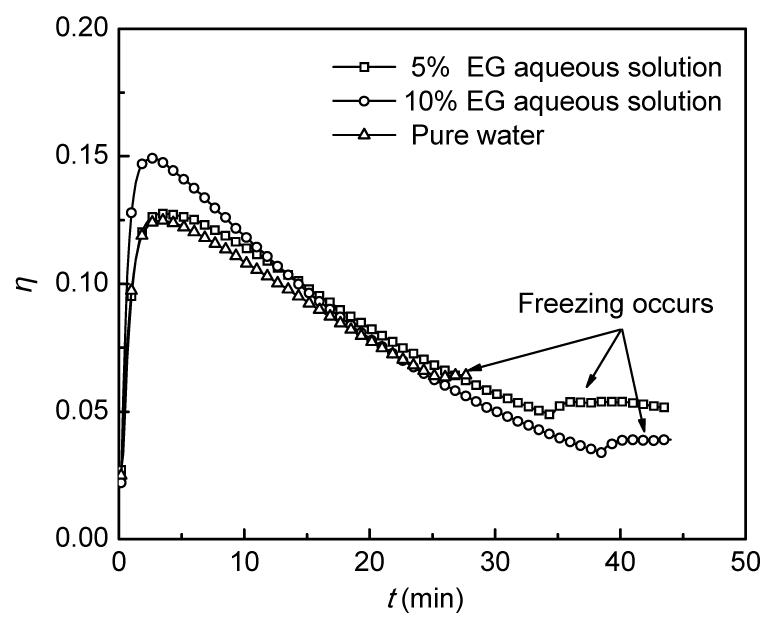 Fig. 8 shows the ice slurry formation in the generator, where 10% EG aqueous solution was used as the ice making solution. 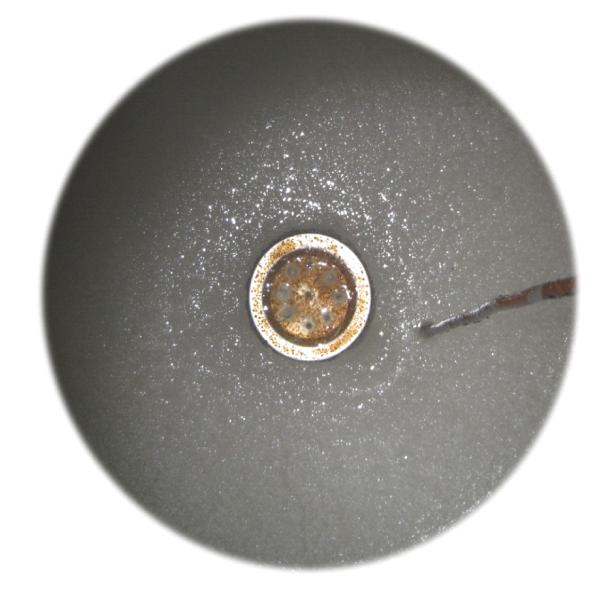 Fig.8
Ice slurry formation around the nozzles
The ice production rate is calculated as follows: where m is the ice mass, and L is the latent heat of ice. 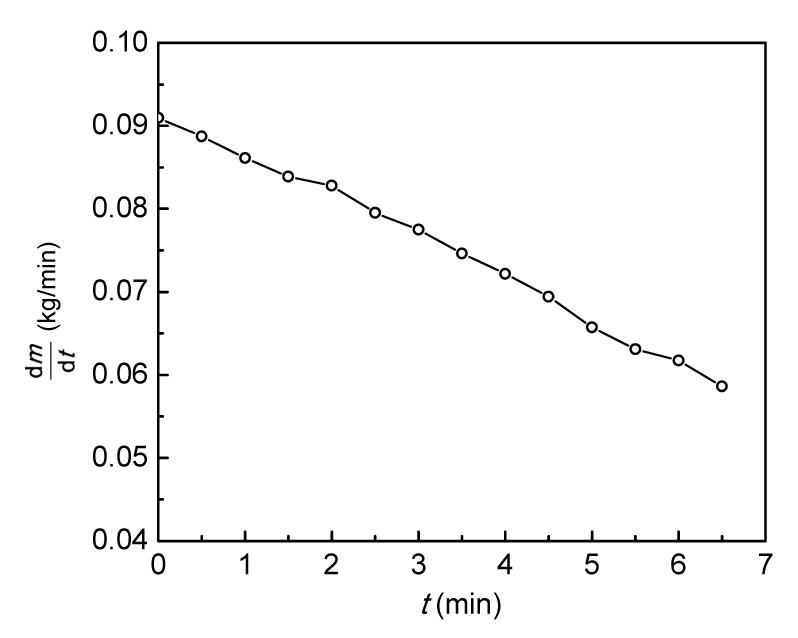 Based on the empirical formula of heat transfer, a laboratory-scale direct contact ice slurry generator was constructed, and energy efficiency coefficients of 0.038, 0.053, and 0.064 were obtained using different solutions. Regarding practical applications, a direct contact ice slurry generator using air as the cooling fluid is feasible, especially applied to LNG cold energy. In the air cycle, the cold energy consumption of the air compressor accounts for more than half of the total amount, which is to be reduced. In order to improve the system energy efficiency coefficient, it is necessary to increase the air pipes insulation and the solution thermal capacity, and it is also appropriate to utilize the free cold energy of LNG.


*&nbspProject (No. 51176164) supported by the National Natural Science Foundation of China