Abstract: pseudobranch function has long interested scientists, but its role has yet to be elucidated. Several studies have suggested that pseudobranchs serve respiratory, osmoregulatory, and sensory functions. This work investigated the immunolocalization of pseudobranch carbonic anhydrase (CA) in the teleost fish species rainbow trout (Oncorhynchus mykiss) to clarify its physiological function. CA was purified from rainbow trout gills O. mykiss and specific antibodies were raised. Immunoblotting between tissue homogenates of pseudobranch and gill CA antibodies showed specific immunostaining with only one band corresponding to CA in the pseudobranch homogenate. Results of immunohistochemical technique revealed that CA was distributed within pseudobranch cells and more precisely in the apical parts (anti-vascular) of cells. The basal (vascular) parts of cells, tubular system, blood capillaries, and pillar cells were not immunostained. immunocytochemistry confirmed these results and showed that some CA enzyme was cytoplasmic and the remainder was linked to membranous structures. The results also showed that the lacunar tissue layers did not display immunoperoxidase activity. Our results indicated that pseudobranch CA may have a function related to the extracellular medium wherein CA intervenes with the mechanism of stimulation of afferent nerve fibers.

Broussonet (1785) considered the pseudobranch to be a small gill whose function is related to respiration. This hypothesis was rejected by Hyrtl (1838), who demonstrated that the pseudobranch perfused by arterial blood originates from the efferent arterial gill. The morphology of the pseudobranch has been studied in the review article of Laurent and Dunel-Erb (1984), and other studies have suggested its involvement in functions including vision (Dimberg, 1995; Bridges et al., 1998; Mölich et al., 2009), osmoregulation (Quinn et al., 2003), and secretion (Bridges et al., 1998). Laurent and Rouzeau (1972) and Laurent (1974) reported that the pseudobranch contains several types of chemoreceptors that are sensitive to hydrostatic pressure, oxygen partial pressure, pH, osmotic pressure, and increased sodium concentration. Chemoreceptors also reportedly support the oxygen concentrating mechanisms in the eyes of teleost fishes, and this mechanism thought to underlie the oxygen concentration mechanisms is the root effect (Bridges et al., 1998; Waser and Heisler, 2005; Berenbrink, 2007; Rummer and Brauner, 2011).

Large quantities of CA in pseudobranch tissue have been detected by both enzymatic activity assay (Maetz, 1956) and the cobalt histochemical technique (Hansson, 1967; Laurent et al., 1969). Laurent et al. (1969) showed that CA is localized in the vascular part of pseudobranchial cells and related to the tubular system in the basal part of the cells. They concluded that this enzyme plays an important role in stimulating nerve endings located in the extracellular spaces of the pseudobranch epithelium. The specificity of the histochemical technique used by Laurent et al. (1969) has been questioned on several occasions (Churg, 1973; Muther, 1977).

In the present study, we used antiserum obtained from fish gill CA specific to pseudobranch CA. We found that the enzyme is localized in the apical part (anti-vascular) of pseudobranch cells, which differed from the finding of Laurent et al. (1969).

Fresh water rainbow trout (O. mykiss) (250–300 g) were obtained from a fish farm in Strasbourg, France, and kept in external laboratory aquaria containing tap water. All experiments were performed according to the Guidelines for the Care and Use of Laboratory Animals (Rahim, 1988). Gill CA was purified as described by Rahim et al. (1988). In a typical procedure, gills were freed of blood and then filaments were excised and homogenized in phosphate buffered saline (PBS) containing 1% Triton X-100 (Sigma). The supernatant was contained both the soluble and bound forms of gill CAs, and purification was performed by affinity chromatography on sulfanilamide Sepharose gel (Filippi et al., 1978). The purity was tested using 1D polyacrylamide (10%) gel electrophoresis under denaturing conditions (Laemmli, 1970), and markers were used to determine the molecular weight of the purified enzyme (bovine CA 30 kDa, ovalbumine 43 kDa, albumin 67 kDa, and phosphprylase-b 94 kDa).

2.2.  Preparation of antibodies against gill CA

Pure antigens purified from the gills of freshwater rainbow trout O. mykiss were used to produce antibodies in rabbits (Delaunoy, 1983). Three rabbits were immunized by the subcutaneous injection of 1 mg of CA emulsified in complete Freund’s adjuvant. After three weeks, the animals received a second subcutaneous injection of CA as a booster injection in incomplete Freund’s adjuvant. The animals were bled by heart puncture 50 d after the first injection. Antisera were fractionated and stored at −30 °C. The monospecificity of the antisera was examined by immunoblotting (Towbin et al., 1979) against homogenates of gill and pseudobranch samples. After transferring the proteins from sodium dodecyl sulphate (SDS)-gel electrophoresis onto a nitrocellulose membrane, they were incubated with gill CA antibodies (1/100 dilution) and then with sheep anti-rabbit IgG (1/500 dilution) peroxidase conjugate (Biosys-France) for 2 h. The nitrocellulose membranes were washed three times for 10 min in PBS. Antigen-antibody complexes were detected with 4-chloro-1-napthol. The reaction was carried out in darkness at laboratory temperature for 15 min (Rahim et al., 1988).

The pseudobranch was excised and immediately immersed for 2–3 h in a cold fixative containing 4:69:5:22 (v/v) formaldehyde:ethyl alcohol:acetic acid: distilled water (Cammer and Tansey, 1987). Dehydration of the pseudobranch samples, paraffin embedding, and deparaffination of sections were performed according to the method of Kumpulainen (1981). All treatments were performed at 4 °C. Thick sections (7 μm) from pseudobranch samples were cut and mounted on a slide for indirect immunoperoxidase staining. Endogenous activity was inhibited by incubating the sections with 3% H2O2. The sections were then incubated with gill CA antibodies (1/200 dilution) for 1 h. After washing three times for 10 min in PBS, the sections were treated with sheep anti-rabbit serum IgG-peroxidase conjugate (1/150 dilution) for 1 h and washed three times for 10 min in PBS. The sections were then incubated for 10 min with 3,3'-diaminobenzidine for immunoreactivity detection. Control sections were treated as above except that non-immune rabbit serum replaced gill CA antibodies (Rahim et al., 1988).

The pseudobranch was excised, fragmented (2–4 mm), and fixed for 2–3 h in a cold fixative containing 4% paraformaldehyde and 0.1% glutaraldehyde in 0.1 mol/L PBS (pH 7.4). After fixation, the tissues were washed in PBS (3×10 min). Pseudobranch fragments were embedded in gelatin (25%) and cut (50 μm) using a vibratome (Campder Instruments Ltd., UK). The sections were washed with PBS for 1 h with gentle agitation at 4 °C, incubated with rabbit anti-gill CA serum (1/100 dilution) for 1 h, washed with PBS (4×15 min), incubated with sheep anti-rabbit serum IgG-peroxidase conjugate (1/100 dilution) for 1 h, washed again with PBS (3×15 min), and treated with 3,3'-diaminobenzidine for 10 min for immunoperoxidase detection (Graham and Karnovsky, 1966). The sections were rewashed with PBS for 1–2 h and post-fixed for electron microscopy observation with osmic acid (1%) for 1 h. After dehydration in ethyl alcohol, sections were embedded in araldite resin and ultrathin sections were prepared using an ultramicrotome. The ultrathin sections were then observed under an electron microscope (SIEMENS, Germany) without coloration. Control sections were prepared as above except that non-immune rabbit serum was used instead of gill CA antibodies.

Gill CA was purified by affinity chromatography on sulfanilamide Sepharose gel. The active fraction of CA was eluted as a single peak with CNO−. The purity of the isolated CA fractions was analyzed by SDS-gel electrophoresis, and gill CA showed one single band at 30 kDa (Fig. 1a). 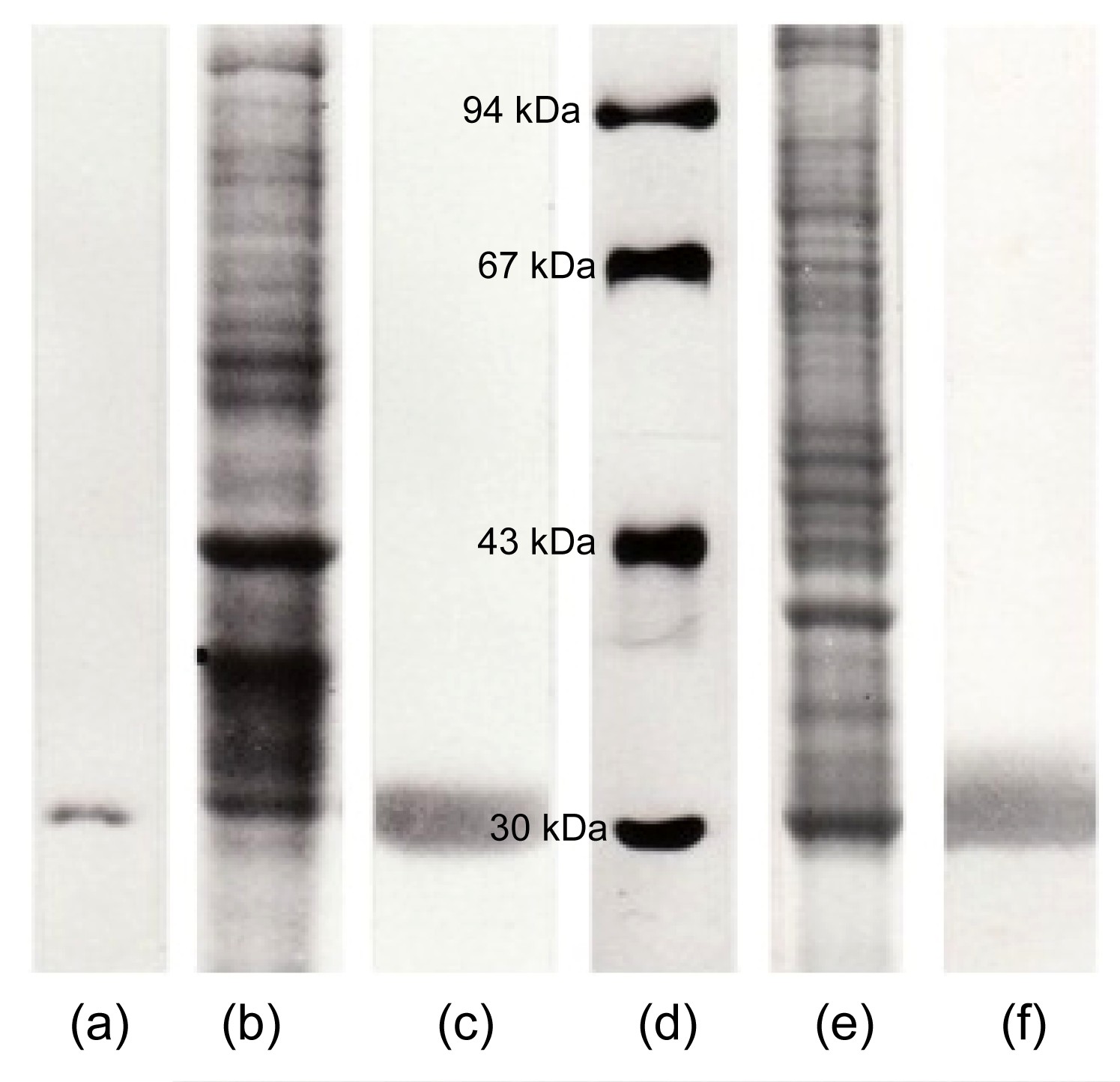 The immunization of rabbits with isolated gill CA produced a specific antiserum, as confirmed by an immunoblotting experiment (Figs. 1b and 1c). Gill CA antiserum stained only one band corresponding to gill CA in the rainbow trout gill homogenate (Fig. 1c).

The paraffin sections showed that CA was localized in the apical part (anti-vascular) of pseudobranch cells (Fig. 2). CA was found to be distributed within pseudobranch cells particularly in the part adjacent to lacunar tissues (Fig. 2). The basal (vascular) part of cells, tubular system, endothelium of blood capillaries, and pillar cells were not stained (Fig. 2). Reaction specificity was confirmed by the complete absence of immunostaining in the control sections (Fig. 3) incubated with non-immune rabbit serum. 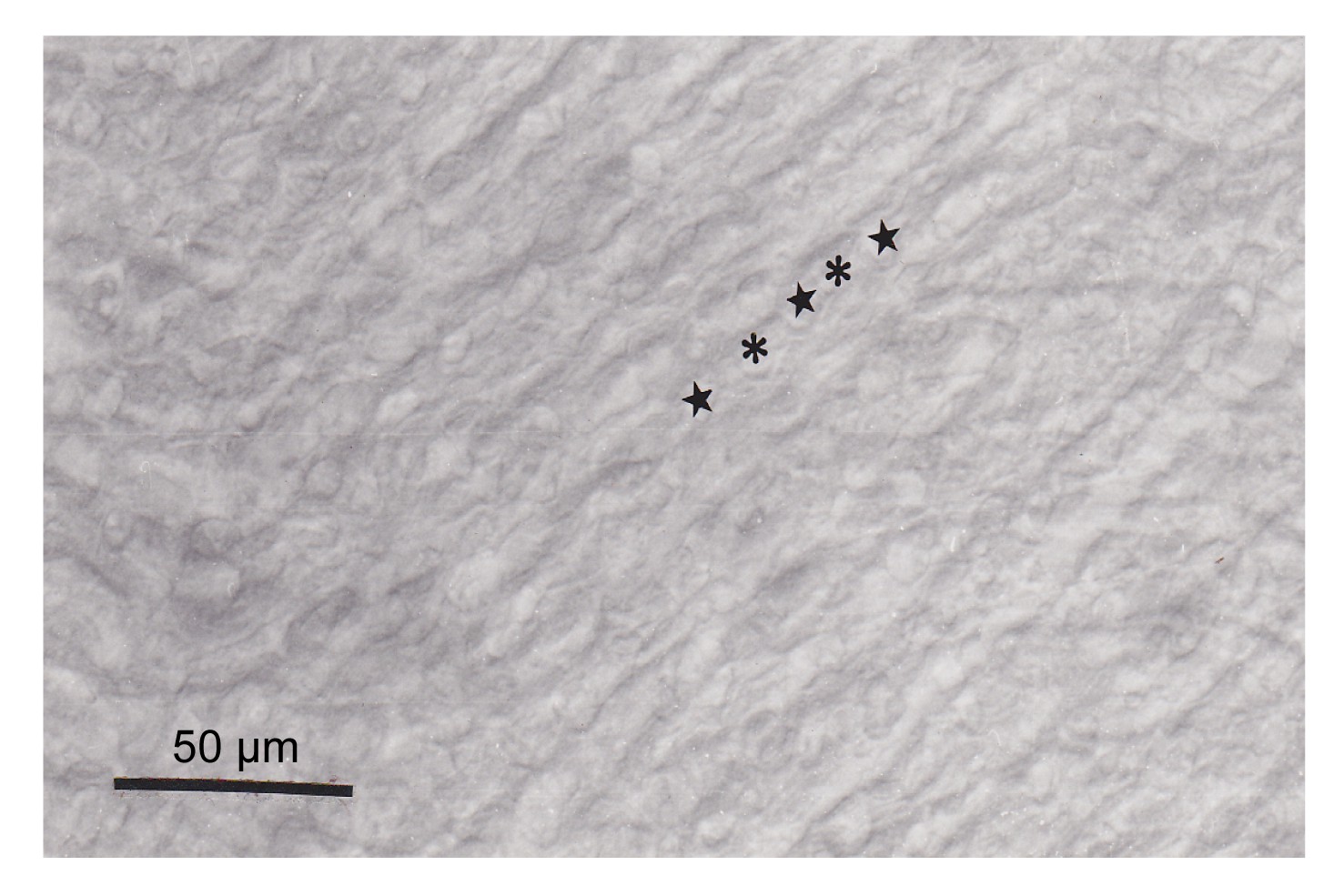 Fig.3
Control section for reaction specificity
The control section showed a total absence of immunoreactivity. ★ and * show the emplacement of capillaries and pillar cells, respectively

CA was distributed in pseudobranchial cells, mainly in the apical (anti-vascular) region of cells (Figs. 4–6). The tubular system in the basal (vascular) part of the cells and mitochondria were not marked (Figs. 5 and 6). These immunocytochemical results showed that some CA molecules were cytoplasmic and others were connected with membranous structures, particularly the plasma membrane of cells (Fig. 5). The lacunar tissue layers that separated the pseudobranch lamellae from the endothelium of capillaries did not display immunoreactivity using the immunocytochemical technique (Fig. 6). The control sections with non-immune rabbit serum instead of immune serum at an identical dilution did not show immunostaining (Fig. 7). 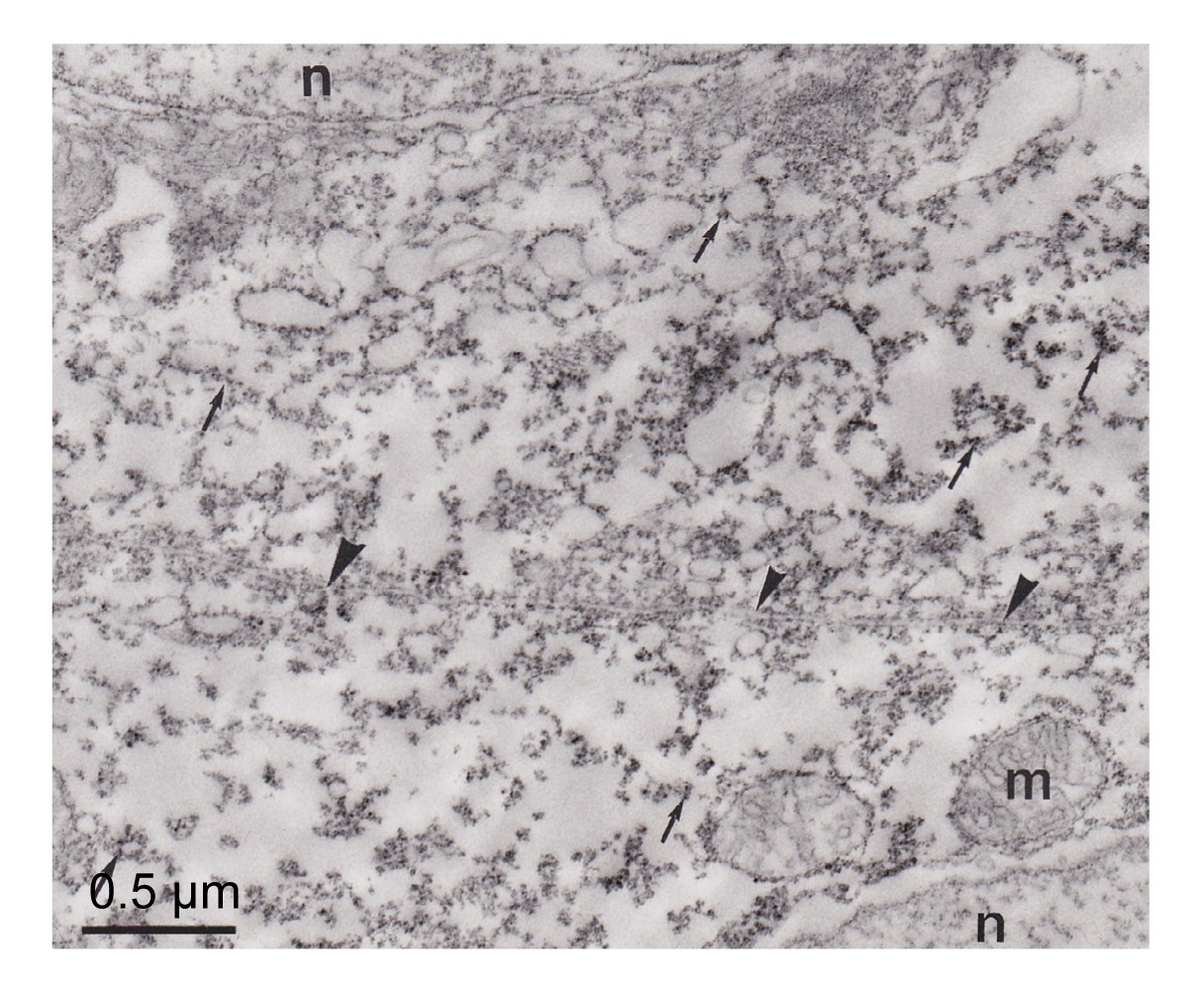 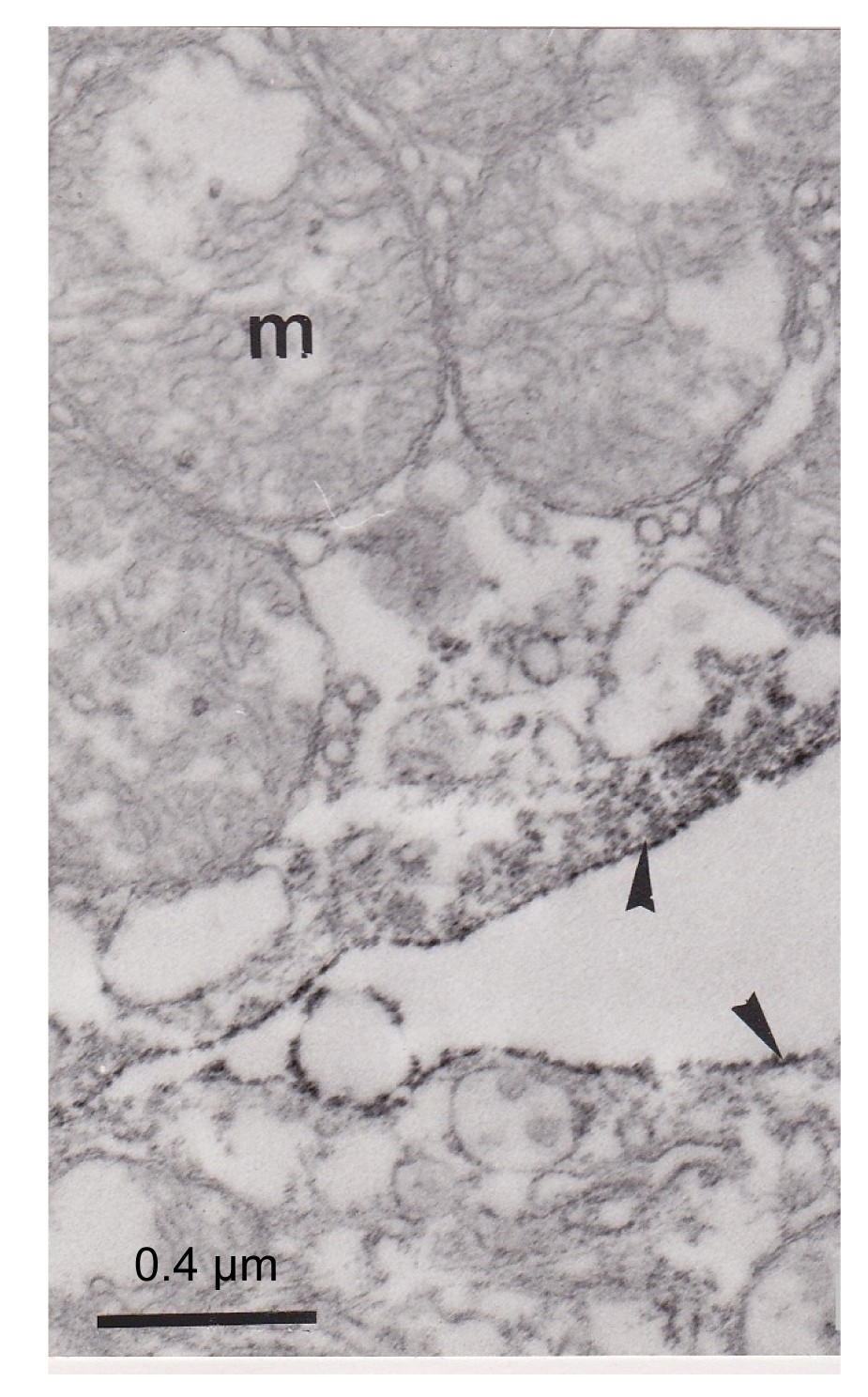 Fig.5
Ultrathin section showing apical parts (arrowheads) of two separated pseudobranch cells
Note that the immunoreactivity was distributed principally in the apical part of the cell and the plasma membrane of these two cells was highly marked (arrowhead). m: mitochondria 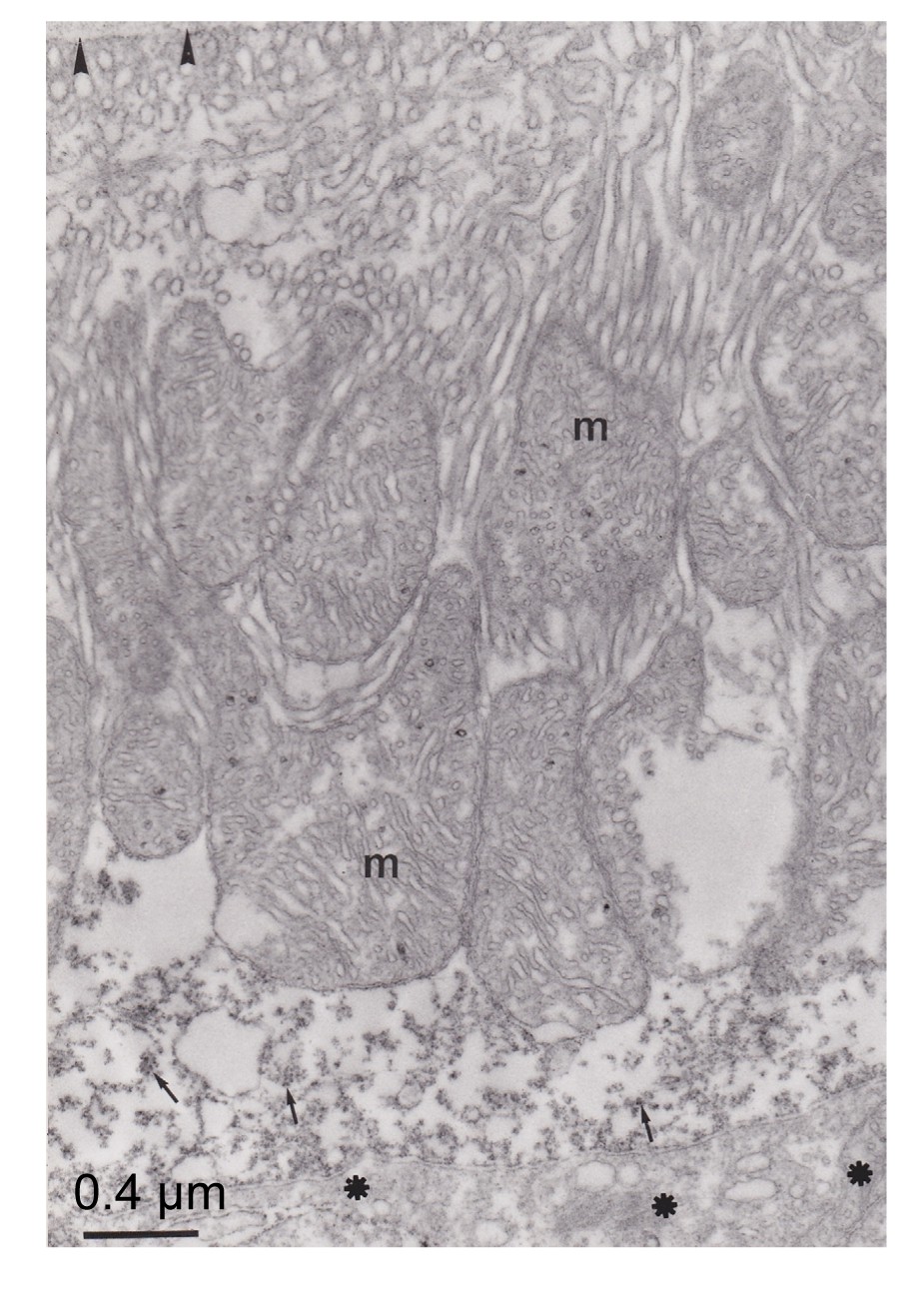 Fig.6
Electron micrograph of pseudobranch cells
Note that the immunoreactivity was distributed in the apical part of the cell (arrow). Lacunars tissue (asterisks) is not marked. Basement membrane (arrowhead) was not immunostained. Mitochondria (m) and tubular system are not marked

CA localization in the pseudobranch tissue observed under light and electron microscopes confirmed the presence and localization of CA within pseudobranch cells. Some CA molecules were distributed in the cytoplasm of the apical (anti-vascular) area of pseudobranch cells, and some were connected with membranous structures, particularly with the apical membrane of cells. The results also showed that the lacunar tissues contiguous to the apical part of pseudobranch cells did not display immunostaining. The pillar cells and capillary endothelium were also not immunostained. These results did not agree with those obtained by a previous histochemical technique (Laurent et al., 1969), in which the histochemical reaction products were found to be distributed in the basal part of pseudobranch cells. Our immunohistochemical results that localized the enzyme per se did not agree with the results of a cobalt histochemical technique. This technique localized the reaction products catalyzed by CA but suggests that the product cobalt carbonate may accumulate in the invaginations of the basolateral membrane. On the other hand, the immunocytochemical localization of pseudobranch CA is similar to that of CA in the gill epithelium of rainbow trout (Rahim et al., 1988), and the enzyme is distributed in the apical part of gill epithelium. This finding suggested that the function of CA is related to the external environment. Regarding the pseudobranch, our results suggested that CA can function in the same manner but in relation to the extracellular medium and not to the respired water.

CA in the apical part of pseudobranch cells is involved in the stimulation of afferent nerve fibers (Laurent, 1967; Laurent et al., 1969). The stimulation of afferent fibers occurs not through electrical or chemical synapses but through a liquid phase in which changes in the extracellular ionic composition may act on nerve endings. For example, stimulation of afferent nerve fibers can be the consequence of a direct action of K+ ions released by pseudobranch cells when the H+ ion concentration increases, particularly under the conditions of hypoxia and hypercapnia. CA may be able to speed up the response time to these stimuli.

In conclusion, our results demonstrated that pseudobranch CA was immunolocalized in the apical (anti-vascular) part of cells, different from the finding of the histochemical method of Hansson (1967). However, further physiological studies are needed to elucidate the functions of the pseudobranch and CA.


Compliance with ethics guidelines&nbspS. M. RAHIM, A. G. MAZLAN, K. D. SIMON, J. P. DELAUNOY, and P. LAURENT declare that they have no conflict of interest.