Abstract: In this study, we investigated the molecular phylogeny of 64 clinical isolates which were identified as Sporothrix schenckii sensu lato by morphological identification. All of the strains were isolates from patients from several provinces in China. The phylogeny was inferred by DNA sequence analyses based on datasets of the ribosomal internal transcribed spacer (ITS) and a combined ITS and partial β-tubulin region. Reference sequences were retrieved from GenBank. Results showed that all of the isolates were clustered in a distinct clade with a type of Sporothrix globosa. Our analysis showed that S. globosa is the causal agent of the tested sporotrichosis in China, rather than S. schenckii that was generally believed to be the case. The existence of S. schenckii in China remains to be confirmed. This study improved our understanding of the distribution of the species in S. schenckii complex.

Sporotrichosis is an acute or chronic mycosis caused by infection of the Sporothrix schenckii, and recently is demonstrated to be a species complex (López-Romero et al., 2011). Humans and animals acquire it from inoculation of the fungus through thorns, traumas and scratches or bite wounds (de Lima Barros et al., 2004; Schubach et al., 2008), even the spores can enter through the respiratory tract. Sporotrichosis may develop as a disseminated disease in immunocompromised individuals particularly in acquired immunodeficiency syndrome (AIDS) patients (Yap, 2011). Sporotrichosis has a global distribution. In China, it is more frequently encountered in the northeast provinces including Jilin, Heilongjiang, and Liaoning (Zhang and Lin, 2008; Mei et al., 2011; Song et al., 2011a; 2011b).

S. schenckii had long been believed to be the unique causal agent of sporotrichosis. Identifications were made primarily based on morphological characters (Lopes-Bezerra et al., 2006). Phylogenetic analysis based on the sequences of the internal transcribed spacer (ITS) region suggested that more than one species existed in this morphologically defined group, indicating this is a species complex (de Beer et al., 2003). Recently, isolates received as S. schenckii were regrouped into at least six cryptic species by multilocus phylogenetic analysis, and exhibited a degree of geographical specificity (Marimon et al., 2006; 2007; Madrid et al., 2010). Different clinical forms of sporotrichosis are related to the host condition, the route of infection, and the virulence of pathogen, while the virulence was suggested to be associated with different species of Sporothrix (Arrillaga-Moncrieff et al., 2009; Fernandes et al., 2013). Therefore, it is important to recognize what are the real causal agents of the sporotrichosis in various regions, because of the significant differences in the guiding clinical management among these species. Clinical Sporothrix species have previously been classified based on the partial calmodulin sequences (Marimon et al., 2007; 2008b; Tan et al., 2013), but calmodulin regions have been reported to have a lower amplification efficiency as compared to more commonly used regions such as the ribosomal ITS and β-tubulin. ITS is widely used in fungal identification, and recommended as the general barcode for fungi, although additional markers might be needed to distinguish species in certain complexes (Schoch et al., 2012). Zhou et al. (2013) concluded that all the Sporothrix complex species of clinical isolates could readily be recognized by ITS phylogeny.

The aims of this study were to (1) collect a wide range representative strains of pathogens causing sporotrichosis in China, and (2) characterize these strains and confirm their identity through analyses of the ITS sequences and β-tubulin of these strains with relevant taxa.

Sixty-four clinical isolates identified as S. schenckii sensu lato were included in this study (Table 1). All these isolates were collected from the Dermatology Departments of three hospitals in China, mostly from farmers, housewives, or children. The breakdown is as follows: 26 from the First Hospital of Jilin University (Northeast China), 13 from the First Hospital of Beijing University (North China), and 25 from the Southwest Hospital of the Third Military Medical University (Southwest China). These isolates were subcultured on 2% potato-dextrose agar plates at 25 °C for 14 d. Isolates were then stored in sterilized water at 4 °C and on potato dextrose agar (PDA) slant at room temperature.

Sporothrix spp. strains were inoculated on 2% PDA plates and incubated at 25 °C for 10 d. About 200 mg of fresh filamentous mycelia were scraped off for DNA extraction. The total genomic DNA was extracted using the cetyltrimethyl ammonium bromide (CTAB) method (Porebski et al., 1997). The quality and quantity of genomic DNA were detected by using 1% agarose gel electrophoresis imaging. Products were stored at −20 °C. The BT2a/BT2b primers were used to amplify the partial β-tubulin gene (Glass and Donaldson, 1995). The ITS region was amplified using the primer pair ITS1/ITS4 (White et al., 1990). The polymerase chain reaction (PCR) mixture consisted of 2.5 μl of 10 mmol/L PCR buffer, 2 μl of 2.5 mmol/L dNTP mix, 1 μl of each primer (10 μmol/L), 1 μl of DNA template, 0.2 μl Taq DNA polymerase, and 17.3 μl double-distilled water. Amplification was performed through the following steps: initial denaturation at 95 °C for 5 min, followed by 35 cycling consisting of denaturing at 95 °C for 30 s, annealing at 52 °C (Bt2) or 54 °C (ITS) for 30 s, and extension at 72 °C for 1 min, followed by 10 min at 72 °C for extension. The PCR products were quantified by 1% agarose gel electrophoresis, and purified products were sequenced at the Beijing Genomics Institute (BGI; China) with the ITS1/ITS4 and BT2a/BT2b primers mentioned above.

Sequences generated from the forward and reverse primers were assembled using a Contig Express component to obtain consensus sequence. The sequence identified for all our isolates was verified by a BLAST search (http://blast.ncbi.nlm.nih.gov). Several ITS regions and β-tubulin sequences published in GenBank were retrieved as reference sequences, together with sequences of new isolates (Table 1).

Alignments of ITS and combined ITS and β-tubulin were made using an MAFFT program (http://www.ebi.ac.uk/Tools/msa/mafft/) (Katoh and Toh, 2010), and followed by manual adjustments in BioEdit V7.0.5 (Hall, 1999). Both alignments were used for phylogenetic analyses.

The maximum parsimony (MP) analysis was performed using PAUP V.4.0b10 (Swofford, 2003). Ambiguously aligned regions were excluded from all analysis. Trees were inferred using the heuristic search by the 1000 random sequence addition and the tree-bisection-reconnection (TBR) branch-swapping algorithm. Branches of zero length were collapsed and all minimal-length trees were saved. Gaps were treated as missing data. Clade stability was assessed in a bootstrap test with 1000 replications. Tree length (TL), consistency index (CI), retention index (RI), rescaled consistency index (RC), and homoplasy index (HI) were calculated for the generated parsimony trees. A Kishino-Hasegawa (KH) test was performed to determine whether the trees were significantly different. The trees were visualized in TreeView (Page, 1996). The model of evolution was estimated by using MrModeltest 2.3 (Nylander, 2004).

The newly generated sequences in this study were deposited in the GenBank, with their accession numbers listed in Table 1.

Full length ITS regions and partial β-tubulin genes were amplified in this study. The amplified DNA fragments of the ITS regions and β-tubulin genes were approximatively 450 and 600 bp, respectively. The combined dataset of the ITS regions and β-tubulin genes contained 1052 characters, of which 742 characters were constant, 191 variable characters were parsimony-uninformative, and 119 were parsimony-informative. One of the most parsimonious trees with the shortest tree length (TL=465, CI=0.856, RI=0.835, RC=0.714, and HI=0.144) is shown in Fig. 1. In our combined phylogenetic tree, all the 64 clinical strains collected from different regions of China clustered in a well supported (99%) phylogenetic clade together with the ex-type strain of S. globosa (CBS 120340). This clade shows sufficient distance to the type of S. schenckii (CBS 359.36) (Fig. 1). The 64 isolates from China in the S. globosa clade were distributed among 18 different haplotypes. 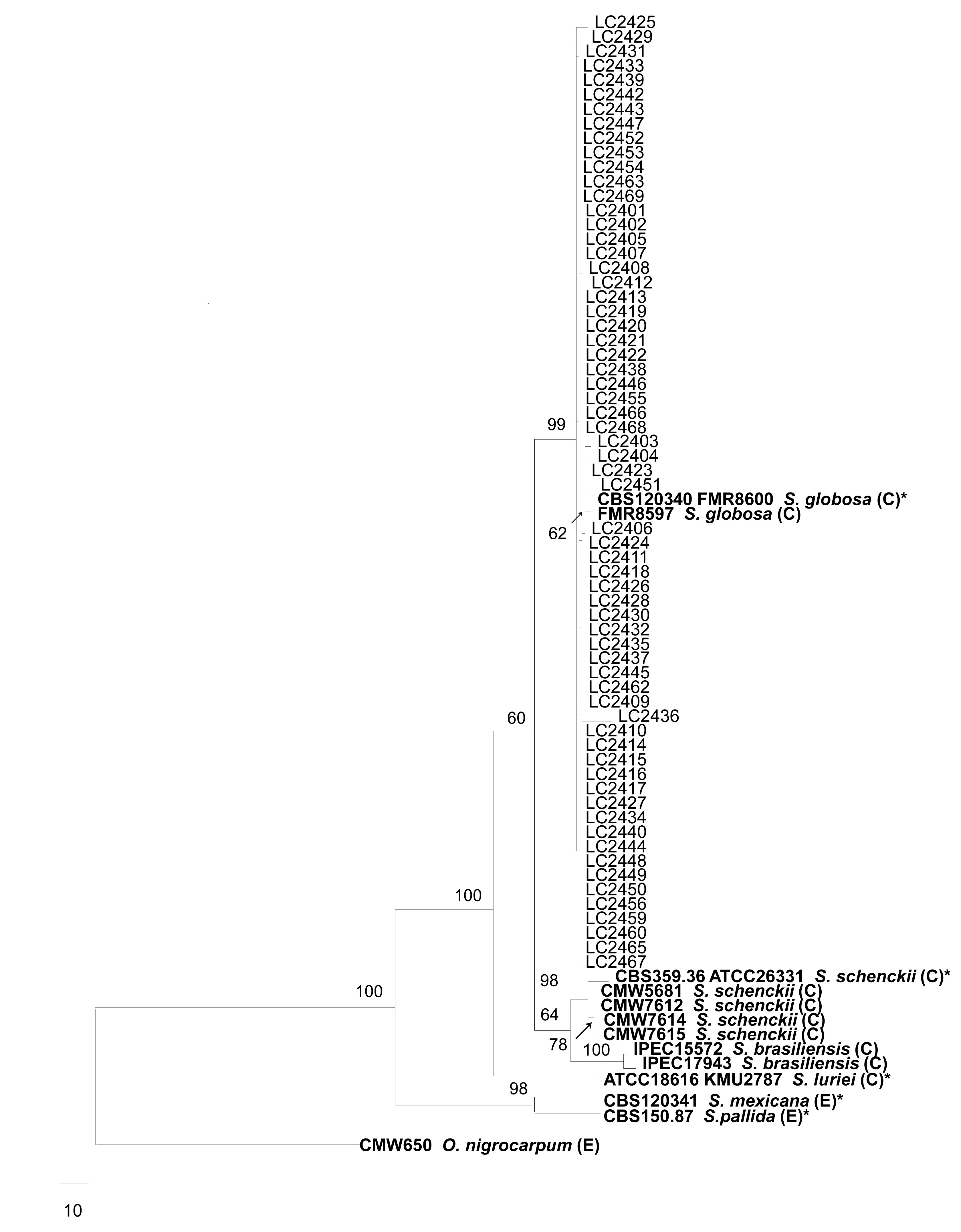 Fig.1
Phylogenetic tree generated from a maximum parsimony analysis based on the combined ITS and partial β-tubulin sequence alignment
Bootstrap support values above 50% are shown above the branches, and the scale bar indicates 10 changes. The tree is rooted with Ophiostoma nigrocarpum. Reference sequences are shown in bold. “C” and “E” indicate clinical and environmental strains, respectively.

S. globosa had been reported with widespread geographical distributions, such as in Chile, India, Italy, Japan, Spain, UK, and USA (Madrid et al., 2009). Previously, based on calmodulin (CAL) sequence analysis, five Chinese environmental isolates received as S. schenckii had been clustered into the clade of S. globosa (Marimon et al., 2007), together with six clinical isolates of Sporothrix using ITS region analysis (Zhou et al., 2013), and a total of 11 (100%) Chinese isolates were confirmed to be S. globosa. In this study, we sampled 64 clinical strains from a wider geographic regions of China, and our combined analysis of ITS and β-tubulin regions further confirmed that the causal agent of sporotrichosis is S. globosa in China. However, none of these isolates exhibited the same haplotype as the type of S. globosa CBS 120340, which is a clinical strain from Spain. We did not find a significant correlation between geographic origins of these strains and their genetic variations based on the haplotype data. More research is needed to indicate whether S. schenckii or other Sporothrix species exist in China.

Sporotrichosis is characterized by a wide range of cutaneous and extracutaneous clinical manifestations. Kong et al. (2006) revealed that different randomly amplified polymorphic DNA (RAPD) genotypes of strains led to different clinical forms. There have been reports about cutaneous dissemination and invasive sporotrichosis caused by S. schenckii and S. brasiliensis since Marimon et al. (2007) discovered the three new species of Sporothrix (Galhardo et al., 2010; Silva-Vergara et al., 2012). However, no case of such clinical classification attributed to S. globosa has been reported. Except of the absence of sporotrichosis forms caused by S. globosa in some studies (Zhou et al., 2013), all of the clinical patterns in our study were characterized as fixed and lymphocutaneous, as well as five cases caused by S. globosa described in Brazil (de Oliveira et al., 2010; Rodrigues et al., 2012) and Chile (Cruz et al., 2012). We considered that this observation could be explained by the different virulence levels of members in S. schenckii complex. Although a study on the murine model has shown that the most virulent species was S. brasiliensis, followed by S. schenckii and S. globosa (Arrillaga-Moncrieff et al., 2009), further studies are needed to investigate the possible pathogenesis of different clinical types of sporotrichosis.

Some in vitro studies of S. schenckii sensu lato showed variable antifungal susceptibility among different isolates (Brandsberg and French, 1972; McGinnis et al., 2001), which indicates the existence of cryptic species with variations in antifungal susceptibility. Similar conclusions were presented by the studies of other fungal complexes such as the Pseudallescheria boydii (Gilgado et al., 2006) and the Coccidioides immitis complex (Koufopanou et al., 2001). In a recent in vitro antifungal susceptibility test, S. brasiliensis showed the best response to antifungals in general, followed by S. schenckii, S. albicans, S. globosa, and S. mexicana (Marimon et al., 2008a). Therefore, species identification of clinical isolates is essential to determine the effective treatment, and it is significant to study their epidemiology, geographic distribution, and the relevance among taxa, virulence, and clinical patterns.

The data in our study showed that the sporotrichosis cases in China were caused by S. globosa rather than S. schenckii, and it is demonstrated that ITS and β-tubulin are also efficient to distinguish species in S. schenckii species complex. With the increasing multilocus sequence data in this group, efficient molecular diagnosis protocols using specific primers should be developed to enable a rapid and accurate identification of clinical Sporothrix species.


*&nbspProject supported by the National Natural Science Foundation of China (No. 31270062) and the Chongqing Science and Technology Commission (No. cstc2011jjA 10089), ChinaCompliance with ethics guidelines&nbspTing-ting LIU, Ke ZHANG, and Xun ZHOU declare that they have no conflict of interest.