Abstract: Objective: To evaluate the renoprotection effects of non-steroidal anti-inflammatory drugs (NSAIDs) in renal ischemia-reperfusion injury (IRI) and the cyclooxygenase (COX)-1/2 blockade association by indomethacin (IMT) in the mice model. Methods: After the left renal pedicle of mice was clamped, IMT was administrated by intraperitoneal injection with four doses: 1, 3, 5, and 7 mg/kg. Blood and kidney samples were collected 24 h after IRI. The renal functions were assayed by the cytokines and serum creatinine (SCr) using enzyme-linked immunosorbent assay (ELISA) kits. Kidney samples were analyzed by hematoxylin and eosin (H&E) and immunohistochemistry stainings. Results: The mice administered with 5 mg/kg IMT had a marked reduction in SCr and significantly less tubular damage. The tumor necrosis factor α (TNF-α) activity in renal homogenates and interleukin 6 (IL-6) activity in serum had a marked reduction at doses of 5 and 7 mg/kg IMT. The administration of 3 and 5 mg/kg IMT had a marked reduction in the ratio of thromboxane B2 to 6-keto-prostaglandin F1α. COX-1 and COX-2 stainings were weaker in 5 mg/kg IMT groups than that in the other groups. Conclusions: There was a dose response in the IMT function of renal IRI in mice, and IMT had a protective effect in a certain dose range. The effect of IMT on mice IRI was related to COX-1/2 blockades.

In kidney transplantation, ischemia-reperfusion injury (IRI) contributes to the allograft dysfunction (Peeters et al., 2004; Chapman et al., 2005; Perco et al., 2007). In native kidneys, IRI is a common cause of acute kidney injury (AKI) in patients who are undergoing cardiac surgery or with critical illness, and it is associated with high mortality and morbidity (Levy et al., 1996; Schiffl et al., 2002; Chertow et al., 2005; Bellomo et al., 2008; Kellum et al., 2008; Kinsey et al., 2008). For decades, non-steroidal anti-inflammatory drugs (NSAIDs) have been used successfully in the treatment of numerous clinical diseases for their anti-inflammatory and analgesic effects. Despite the efficacy, long-term use of NSAIDs could cause renal damage, such as renal papillary necrosis (John and Herzenberg, 2009). Does the short-term and low-dose application of NSAIDs have the same damage, such as patient-controlled analgesia (PCA)?

PCA is usually used for relieving pain after major surgery. NSAIDs are commonly combinated with morphine following major surgery with the aim of reducing morphine’s side-effects (McDaid et al., 2010). PCA has reduced the morbidity of cardiac, pulmonary, thromboembolic and renal diseases, and also reduced blood loss and transfusion requirements (Kehlet, 2004). However, many animal studies showed that NSAIDs have a protective effect on the IRI, such as heart, lung, and liver (Takeyoshi et al., 2001; Otani et al., 2007; Carnieto et al., 2009). Studies also showed that NSAIDs displayed a renal protective effect after IRI. The patients would take the treatment of NSAIDs for preoperative renal function normally, but NSAIDS can cause renal dysfunction in the early postoperative period. While the treatment was going on, the renal protective effect would occur (Lee et al., 2007).

Indomethacin (IMT) is one of the most widely used NSAIDs in clinics. An increasing number of studies reported that pretreatment with IMT alone tended to reduce the renal damage after IRI (Schneider et al., 2009). Feitoza et al. (2008) showed that pretreatment of mice with 5 mg/kg IMT could protect the renal function and reduce long-term renal fibrosis. The research on rats indicated that low-dose (1 mg/kg) of IMT adopted after ischemia prevented ischemia-induced down-regulation of Oat1/3 during reperfusion and had a significant protective effect on the renal function after AKI (Feitoza et al., 2002). In this study, we used the mice renal IRI model to evaluate the renoprotection effect of NSAIDs by IMT.

Male mice (C57BL/6; 8–10 weeks, 20–24 g) were purchased from Shanghai SLAC Laboratory Animal Co., Ltd., China. All animals were housed individually in standard cages and had free access to a commercial pellet diet and tap water during the study. All procedures were previously reviewed and approved by the internal ethical committee.

All procedures were performed using strict sterile techniques under general anesthesia with pentobarbital sodium (50 mg/kg, intraperitoneal (i.p.) injection). Animals were set on a warming table to maintain a rectal temperature of 37 °C. A midline incision was made and a right nephrectomy performed. A microaneurysm clamp was used to occlude the left renal pedicle for 60 min; the time of ischemia was chosen to obtain a reversible model of ischemic AKI without significant mortality. After the microaneurysm clamp was removed, reperfusion was confirmed visually by the blood flow returning to the kidney. The animals were administered 1 ml of prewarmed (37 °C) sterile saline (i.p.), and the incisions were closed in two layers. The animals were then allowed to recover with free access to food and water. The sham-operated mice underwent dissection of the left renal pedicle without clamping after removal of the right kidney. After 24 h, mice were re-anesthetized, the abdominal cavity was opened, and blood was obtained from inferior vena. The mice were killed and the kidney was harvested, one-half of each was fixed in 10% formalin, and the residual kidney was snap frozen in liquid nitrogen and stored at −80 °C until further processing.

After the left renal pedicle was clamped, IMT (Sigma, USA) was administrated i.p. at four doses 1, 3, 5, and 7 mg/kg. Animals were randomly divided into six groups (n=6):

Blood samples (about 0.8 ml) were obtained from each animal at 24 h post-reperfusion and centrifuged at 2000g for 5 min to obtain the serum. Serum creatinine (SCr) levels were measured as a marker of renal function, using a creatinine kit (Biovision, USA), and analyzed on a microplate reader.

The renal tissues were fixed in 10% neutral buffered formalin for 24 h, and embedded in paraffin, sectioned at 3 μm according to the standard procedure. The sections were deparaffinized and hydrated gradually and then stained with hematoxylin and eosin (H&E). Tissue sections were scored in a blinded manner to evaluate the degree of tubular necrosis as described by Wan et al. (2011). Tubulointerstitial injury was defined as tubular necrosis, tubular dilatation and/or atrophy, inflammatory cell infiltrate, or cellular edema, and was graded on a scale based on the percentage of tubular affected: 0, normal kidney; 1, minimal necrosis (<5%); 2, mild necrosis (5%–25%); 3, moderate necrosis (25%–75%); 4, severe necrosis (>75%).

Tissues sections of 2-μm thick were dewaxed in xylene and hydrated in graded series of alcohols, and then sections were placed in citrate buffer (pH 6.0) at 120 °C for 10 min. Endogenous peroxidase activity was blocked with 0.3% H2O2 for 30 min at room temperature. Non-specific binding was inhibited by incubation for 15 min with normal goat serum. Then, the sections were incubated with primary antibody rabbit anti-mouse against cyclooxygenase (COX)-1 (500× diluted; BioVision) or rabbit anti-mouse against COX-2 (100× diluted; Epitomics) for 60 min at 37 °C. After washing with phosphate buffered saline (PBS), the sections were incubated for 30 min with horse radish peroxidase-conjugated secondary antibody (ChemMate™ EnVision™ Detection kit). The final detection was performed using freshly prepared DAB as a chromogen, and the colorimetric reaction was allowed to proceed for 1 min. The sections were evaluated blindly by counting the labeled cells in triplicate within 40 high-power fields per section.

All data are expressed as mean±standard error (SE). The Student’s unpaired t-test was used to compare two groups. All analyses were carried out using the GraphPad Prism 5.0 statistical software package, and P<0.05 was accepted as statistically significant.

We first induced renal IRI models in mice and treated them with IMT or saline as control. By comparison to the sham animals, control animals subjected to renal IRI had apparent increased SCr at 24 h, indicating the acute renal dysfunction (P=0.000 005) (Fig. 1, Table 1). However, the mice administered with 5 mg/kg IMT after renal IRI had a marked reduction in SCr vs. the IRI group (control) (P=0.034). The mice administered with 1, 3, 7 mg/kg of IMT had no significant differences in SCr compared with the IRI group. 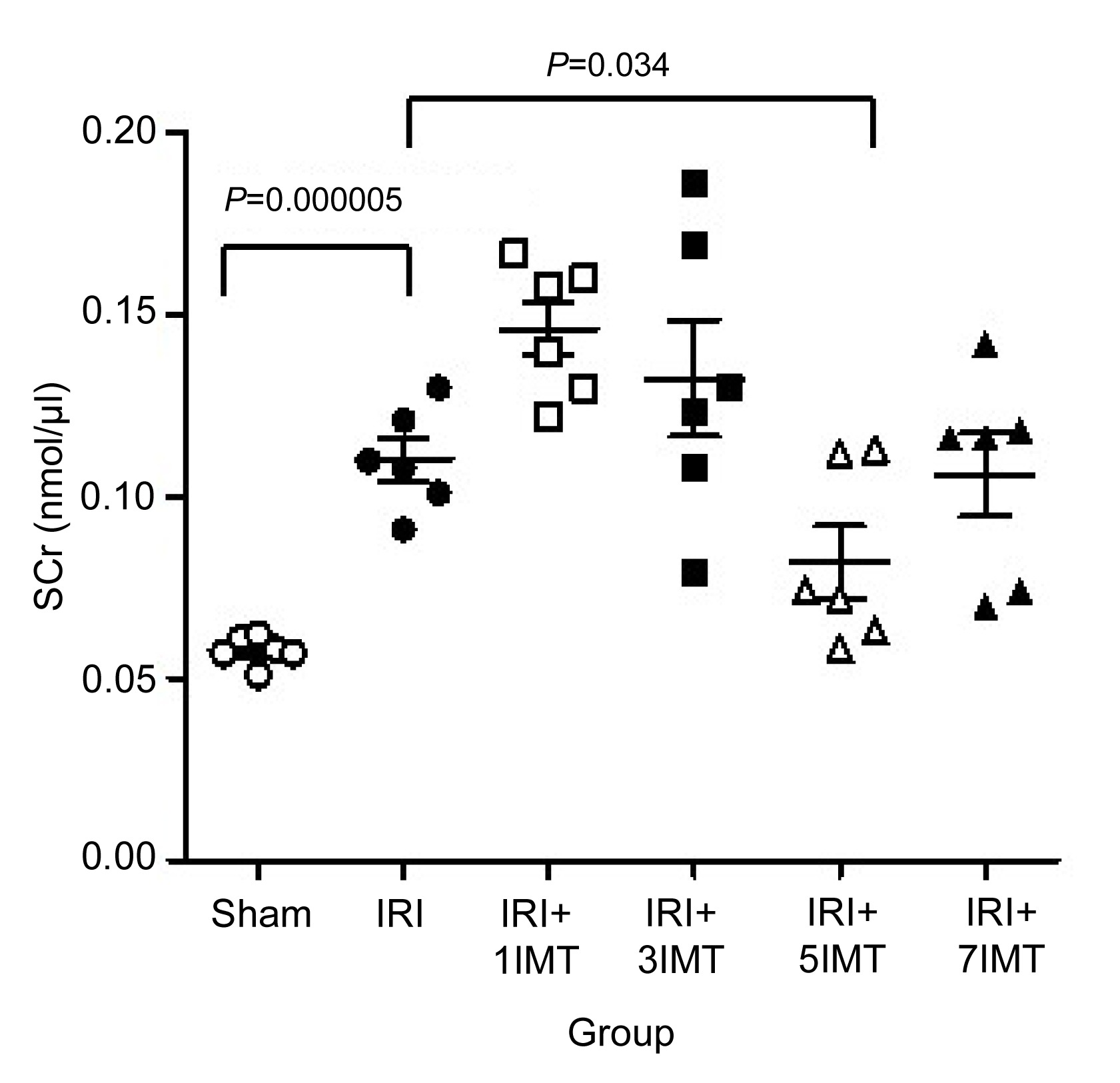 Effects of IMT on expression levels of TNF-α, IL-6, and TxB2/6-keto-PGF1α after renal IRI
Data are presented as mean±SE (n=6)

3.4.  IMT impact on TxB2 and 6-keto-PGF1α expression after renal IRI

Prostanoids have long been known to behave as important physiological and pathological mediators implicated in a number of therapeutic areas of interest. In the kidney, vasodilator prostaglandins (PGI2, PGE2, and PGD2) play an important role in regulating renal blood flow, diminishing vascular resistance, dilating renal vascular beds, and enhancing organ perfusion. On the contrary, thromboxane A2 (TxA2) is a vasoconstriction. TxB2 is a metabolite of TxA2 and 6-keto-PGF1α is a metabolite of PGI2. There is a U-shaped dose-response curve on the ratio of TxB2 to 6-keto-PGF1α. Here, the administration of 1 and 7 mg/kg IMT to mice does not significantly improve renal blood flow. The mice administered 3 and 5 mg/kg IMT have a marked reduction in TxB2/6-keto-PGF1α: IRI 0.36±0.05 vs. IRI+3IMT 0.23±0.02 (P=0.0001) and IRI+5IMT 0.26±0.02 (P=0.002) (Fig. 3c, Table 2).

3.5.  Immunohistochemical analyses of COX-1 and COX-2

Previous work on mice indicated that severe dysfunction after renal IRI was ameliorated by treatment with 5 mg/kg IMT i.p. (Feitoza et al., 2002; 2005). The research on rats showed low-dose (1 mg/kg) IMT had a substantial protective effect on kidney function after AKI (Schneider et al., 2009). In recent studies, we set 1, 3, 5, and 7 mg/kg IMT treatment in the mice IRI model, and found that 5 mg/kg IMT was the proper dose in this study. It was the direct anti-inflammatory effects of IMT on renal proximal tubular cells, which contributed to the observed protection. And the hemodynamic effect of IMT was also dependent on the appropriate dose, which was due to different sensitivity responses to IMT dosages in different rodent species.

Tissue injury after ischemia was not only caused by hypoxia from interrupted blood supply but also the activated inflammatory response by reperfusion. The peripheral leukocytes recruit and the interstitial cells proliferated in the target tissue (Ysebaert et al., 2004). An innate immune system was found to be important for the pathogenesis of IRI in recent years. This is mediated by numbers of cytokines/chemokines, adhesion molecules, transcription factors, and other pro-inflammatory factors which were specifically blocked for profound reduction of IRI (Kinsey et al., 2008; Lutz et al., 2010). Renal IRI induces inflammatory reactions within the renal parenchyma through increased synthesis of pro-inflammatory cytokines such as IL-1, IL-6, and TNF-α (Feitoza et al., 2002). TNF-α is a pro-inflammatory cytokine that upregulates its own expression and other cytokines that are pivotal to the inflammatory response (Donnahoo et al., 1999).

In human and experimental animals, glomerular filtration rate (GFR) reductions had been attributed to persistent vasoconstrictions, potentially contributed to by activation of tubuloglomerular feedback, which was also a result of enhanced delivery of the macula densa solution. Ischemic acute renal failure (ARF) had been referred to as “vasomotor nephropathy” in the past. Post-ischemic kidneys showed increased basal tone and reactivity to vasoconstriction agents, and decreased dilatory responses in arterioles (Bonventre and Weinberg, 2003). The PGE2 and PGI2 caused afferent arteriole dilatation and increased GFR, whereas thromboxanes led to constriction (Kinsey et al., 2008; Lutz et al., 2010). Maintenance of adequate renal function was dependent on homeostasis of substances, which causes mesangial relaxation and contraction. And this balance is shifted towards vasoconstriction, which was reflected by increased renal vascular resistance and decreased renal blood flow (Furtado et al., 2008).

In conclusion, our study highlighted the important role of prophylactic IMT in the response to renal injury in mice. We showed that it involved the modulation of the immune response and renal haemodynamics, and the COX-1 and COX-2 expressions in AKI. Animal studies confirmed the renoprotective effect of IMT at an appropriate dose of 5 mg/kg in mice. There have been no human clinical trials for IMT in human renal IRI based on the consideration of drug safety. Does IMT have a similar effect in humans And what dose is the most appropriate for humans To solve these problems, we need further clinical trails for validation. Therefore, we are calling for more clinical trials to test whether IMT can exert a renoprotective effect during human renal IRI.