1. Cell therapy in congestive heart failure2. Application of CRT-D in a Marfan....3. Roles of SIRT3 in heart failure: from....4. Cellular mechanism of cardiac....5. Brain natriuretic peptide and optimal....6. Metabolic remodeling in chronic heart....7. Bioinformatic analysis for potential....8. Electrocardiogram (ECG) patterns of....9. Levosimendan versus dobutamine in....

We have read with great interest the recent article by Zang and Xia (2014), published in Journal of Zhejiang University-SCIENCE B (Biomedicine & Biotechnology). The authors proposed that both calcium handling and electrical components of cardiac cells could be the cellular mechanism of cardiac alternans, and identifying the main mechanism of cardiac alternans could help to cure targeted patients with heart failure. Here, we present a particular case, which may help you to understand our viewpoint.

A 56-year-old woman, with 30 years of recurrent hypocalcemia, was admitted to our emergency department due to a 1-d chest distress and dyspnea. Informed consent was obtained from the patient for being included in the study. The patient did not have a history of hypertension, valvulopathy, chronic obstructive pulmonary disease, diabetes, renal or liver disease, drug or alcohol abuse, or allergies. Recently, she received, in an irregular basis, oral calcium supplements with calcium carbonate, and was unable to receive appropriate checks to confirm the cause. Upon admission, she felt dyspneic with tetany, and had a temperature of 36.7 °C, respiration of 28 times/min, pulse of 99 beats/min, and blood pressure of 101/68 mmHg. Physical examination revealed normal heart sounds with no obvious murmurs, and basilar moist crepitations of the lungs, and she tested positive for Chvostek’s and Trousseau’s signs. The blood routine test, hepatorenal function, coagulation function, blood glucose level, arterial blood gas, and blood lactic acid were all normal. The serum potassium was 4.24 mmol/L (reference range, 3.50 to 5.20 mmol/L), sodium 144 mmol/L (reference range, 136 to 145 mmol/L), ionized calcium 0.75 mmol/L (reference range, 1.13 to 1.35 mmol/L), inorganic phosphorus 2.44 mmol/L (reference range, 0.87 to 1.45 mmol/L), magnesium 0.74 mmol/L (reference range, 0.70 to 1.10 mmol/L), creatine kinase (CK) 2912 U/L (reference range, 38 to 174 U/L), creatine kinase-MB (CK-MB) 53 U/L (reference range, 2 to 25 U/L), cardiac troponin-I (cTn-I) 0.02 μg/L (reference range, <0.04 μg/L), and serum brain natriuretic peptide (BNP) 1120 pg/ml (reference range, <100 pg/ml). Laboratory results revealed that she had severe hypocalcemia and elevated serum inorganic phosphorus, CK, CK-MB, and BNP. An electrocardiography (ECG) showed T wave alternans in leads I, II, III, aVR, aVL, and V2–V6 (Fig. 1a). A chest radiograph indicated pulmonary edema with cardiomegaly. A color Doppler echocardiography showed the diffuse dilatation and hypokinesia of the left ventricle with an ejection fraction (EF) of 28% and a left ventricular end-diastolic dimension (LVEDD) of 58 mm. There was no pericardial effusion or valvulopathy being detected on the color Doppler check. In view of the above information, acute left heart failure and hypocalcemia should be a definite conclusion. Acute coronary syndrome was excluded despite the presence of a remarkably elevated serum CK level, because neither a proportional elevation of CK-MB and cTn-I nor asynergy on the echocardiography was discovered. Computed tomography angiography of the coronary artery revealed a non-calcified plaque formation and mild stenosis of the left anterior descending coronary artery. Immediately, the patient was given oxygen, furosemide, and an intravenous infusion of 60 ml of 10% calcium gluconate (0.1 g/ml). Simultaneously, oral administration of calcium carbonate was started. At about 6 h after treatment began, both chest distress and dyspnea of the patient were alleviated, and the urine volume apparently increased, as the serum ionized calcium level rose to 0.87 mmol/L. 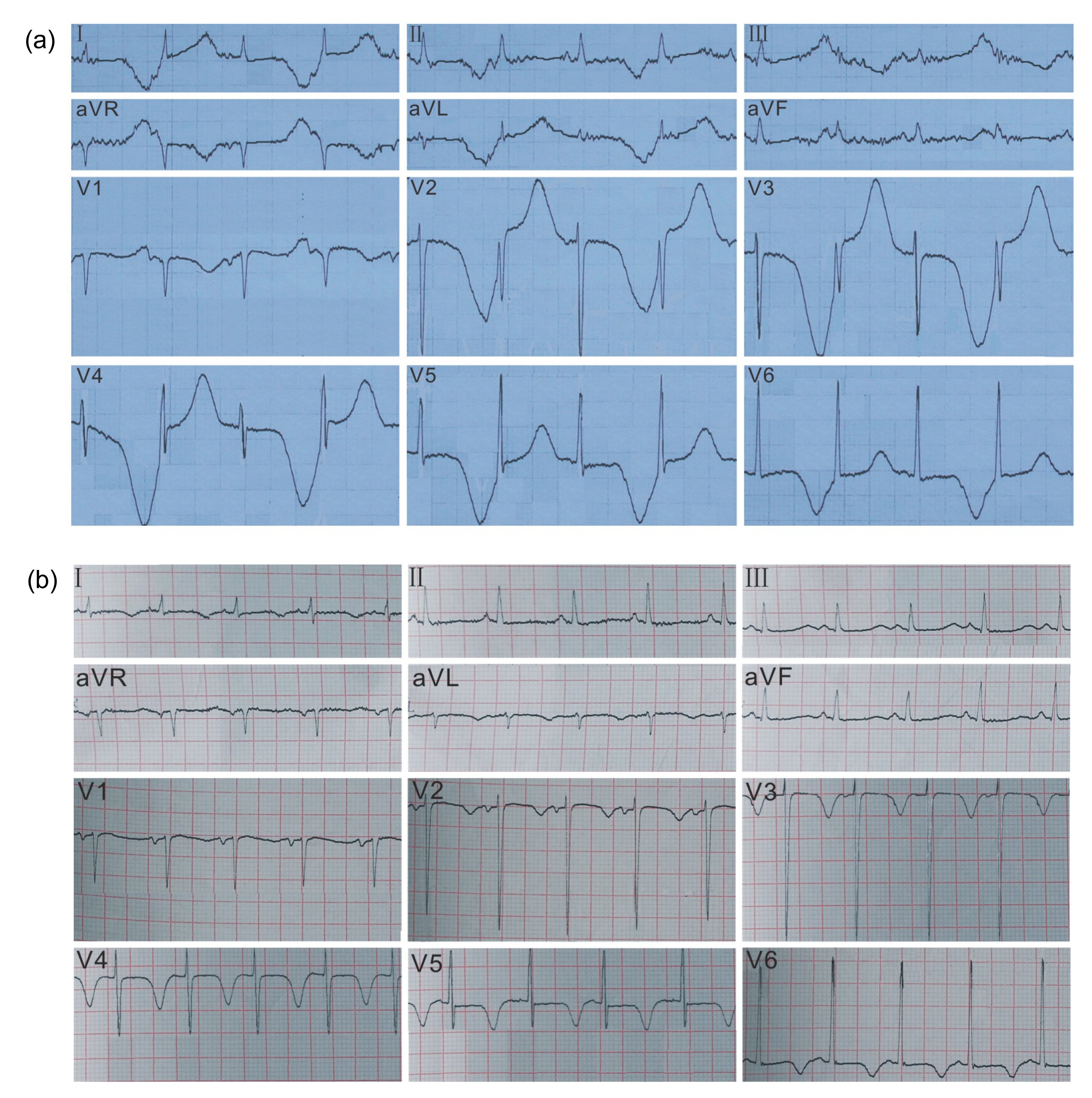 Fig.1
Characteristic ECG of the patient on admission (a) and discharge (b)

During hospitalization, the level of serum parathyroid hormone was less than 3.0 pg/ml (reference range, 12.0 to 65.0 pg/ml), which was consistent with hypoparathyroidism and the accompanying hypocalcemia. The levels of serum cortisol and thyroid hormones were all normal. The thyroid ultrasound showed bilateral multiple thyroid nodules, and the brain magnetic resonance imaging (MRI) revealed partial calcification changes on the basal ganglia and thalamus. Subsequently, calcitriol (vitamin D3) was administered in combination with calcium carbonate. The intravenous administration of 10% calcium gluconate at 20 ml/d was discontinued, when the serum ionized calcium level reached 1.03 mmol/L and the related symptoms of the patient disappeared on the 7th day. After restoring the normal serum ionized calcium level, the cardiac function of the patient improved and the EF rose to 46% on the 10th day. Meanwhile, the ECG showed that the T wave alternans basically disappeared, although the T wave inversions still existed in some leads (Fig. 1b). The patient was discharged on the 12th day, and was prescribed oral supplements of calcium carbonate and calcitriol.

In view of the core function of the calcium in myocardial excitation-contraction coupling, hypocalcemia could result in cardiomyopathy (Aguiar et al., 2013; Rhee et al., 2013). In clinical practice, hypocalcemia as an etiology or incentive of cardiac decompensation is often ignored (Catalano et al., 2012). For this patient, severe and durable hypocalcemia was definitely induced by idiopathic hypoparathyroidism, and had caused enormous damage to the cardiac systolic function. In this case, the curative effects of positive inotropic and diuretic drugs were often poor, and restoration of the serum calcium level usually can rapidly improve the cardiac systolic function (Iwazu et al., 2006).

Furthermore, physicians should be aware of the characteristic T wave alternans of a patient’s ECG, which reflects the cardiac remodeling and heterogeneity of the cardiac repolarization, and often predisposes the heart to ventricular arrhythmias and sudden cardiac death (Zang and Xia, 2014). To control the disorders of cardiac repolarization availably, immediate correction of the serum ionized calcium level should be implemented.

In conclusion, cardiac contractility and electrical activity can be seriously agitated by long-standing hypocalcemia, which is often associated with hypoparathyroidism. The supplements of calcium and calcitriol may help in correcting the serum ionized calcium level, and also apparently improve the cardiac function and electrical activity.