1. Theory and techniques for....2. Effects of dexamethasone and Salvia....3. EDVAM: a 3D eye-tracking dataset for....4. Correlation of serum arylesterase....5. Effects of total dissolved gas....6. Clodronate-superparamagnetic iron....7. A homolog of....8. Developing antibodies from....9. A study of the relationship between....

Abstract: Objective: The aim of the present study was to examine dynamic changes in serum cholinesterase (ChE) activity during early-stage severe trauma and the clinical significance of these changes. Methods: This prospective, observational study included 81 patients with severe trauma who were treated between October 2011 and April 2013 in the emergency intensive care unit (EICU) of a university-affiliated, tertiary-care, grade A general hospital in China. Serum ChE activity was measured on Days 1, 3, and 7 post-injury. The correlation of dynamic changes in serum ChE activity with trauma severity and prognosis was assessed. Correlations between changes in serum ChE activity after injury and albumin (ALB), prealbumin (PAB), transferrin (TRF), and C-reactive protein (CRP) levels were also analyzed. Results: Serum ChE activity in trauma patients was 42.3%–50.2% lower on Days 1, 3, and 7 compared with the control (P<0.001 for all time points), and it continued to decrease after Day 7 in both the survival and death subgroups. In the subgroup with an injury severity score (ISS) of ≤25, serum ChE activity initially decreased, but eventually increased. However, activity decreased continuously in the ISS>25 subgroup. ChE activity was significantly lower in both the death and the ISS>25 subgroups than in the survival and ISS≤25 subgroups on Days 1, 3, and 7 after injury. Activity was negatively correlated with ISS and acute physiology and chronic health evaluation III (APACHE III) at all time points. When comparing the receiver operating characteristic (ROC) curves for predicting prognosis, the area under the curve (AUC) in the plot of serum ChE was similar to the AUCs in plots of ISS and APACHE III, but significantly smaller than the AUC in the plot of the trauma and injury severity score (TRISS). Serum ChE activity was positively correlated with ALB, PAB, and TRF at all time points post-injury. Activity was not significantly correlated with CRP on Day 1, but was significantly and negatively correlated with CRP on Days 3 and 7. Conclusions: There is a significant decrease in serum ChE activity after severe trauma. Serum ChE may be regarded as a negative acute phase protein (APP) and the dynamic changes in serum ChE may be useful as an auxiliary indicator for evaluating trauma severity and predicting prognosis.

Severe trauma is a leading cause of death or disability among young and middle-aged populations in both developed and developing countries (Murdock, 2008; Nzegwu et al., 2008; Cowan et al., 2009). The number of trauma patients is increasing among older populations (Evans et al., 2010). Acute phase proteins (APPs) are plasma proteins that are synthesized in the liver. APPs induce, maintain, and regulate inflammation and the APP concentration increases or decreases by at least 25% in response to non-specific, post-traumatic inflammation. Common APPs include C-reactive protein (CRP), albumin (ALB), prealbumin (PAB), and transferrin (TRF) (Gabay and Kushner, 1999; Lo, 2006).

Serum cholinesterase (ChE), like APPs, is synthesized in the liver and secreted into the blood. ChE activity is lower than the normal in patients with organophosphate poisoning (Rehiman et al., 2008), chronic liver disease (Yoshiba et al., 2002), burns (Kamolz et al., 2002a; 2002b), cancer (Chougule et al., 2008), or serious infections (Kassab and Vijayakumar, 1995). The reduction in ChE activity is closely correlated with the severity of the condition and the prognosis. ChE activity decreases by variable degrees in patients with severe trauma, but to the best of our knowledge, no detailed study of ChE activity has been conducted in such patients. The goal of the present study was to analyze dynamic changes in serum ChE activity during early-stage severe trauma, to explore the correlations between ChE activity and condition severity, prognosis, and APP levels, and to elucidate the clinical significance of early changes in serum ChE activity after severe trauma.

This was a prospective observational study and was approved by the Ethics Committee of the Second Affiliated Hospital, School of Medicine, Zhejiang University (Hangzhou, China). Because repeated venous blood tests are routine procedures in the intensive care unit (ICU) and the proteins (serum ChE, ALB, PAB, TRF, and CRP) examined in this study are commonly measured in routine blood tests, no special informed consent was required from each patient or family. The tests did not cause additional suffering or medical expense.

Patients were treated in the emergency intensive care unit (EICU) of the Second Affiliated Hospital, School of Medicine, Zhejiang University (Hangzhou, China) between October 2011 and April 2013. Inclusion criteria for patients were: admission to the EICU within 24 h of injury, an injury severity score (ISS) greater than 16, and more than 18 years of age. Exclusion criteria for patients were: chronic liver disease, organophosphorus exposure, active tuberculosis or malignancy, a history of infection prior to the injury, or prior liver damage.

Quantitative data are expressed as mean±standard deviation (SD). SPSS 19.0 (IBM, USA) and MedCalc V12.7.7.0 (MedCalc Software Bvba, Belgium) were used for statistical analysis. A two-sample t-test or Mann-Whitney rank sum test was performed for comparison of the means between two groups. A χ 2-test was performed for comparison of rates and Pearson correlation analysis was used for correlation analysis. Dynamic changes in the mean within groups were compared using univariate repeated measures analysis of variance (ANOVA) and pair-wise comparisons were performed using the Tukey’s test. A Z-test was used for comparisons of the AUCs of ROC curves. P<0.05 was considered statistically significant.

Eighty-one subjects meeting the selection criteria were selected from a total of 654 trauma patients. All patients were provided with active life support for organ function and special treatments (such as surgery, hemodialysis, or mechanical ventilation) were implemented based on their conditions. Seventy-six healthy subjects, who received physical exams in the same hospital during the same period of time, were included in the control group. Basic clinical information for all included subjects is shown in Table 1. 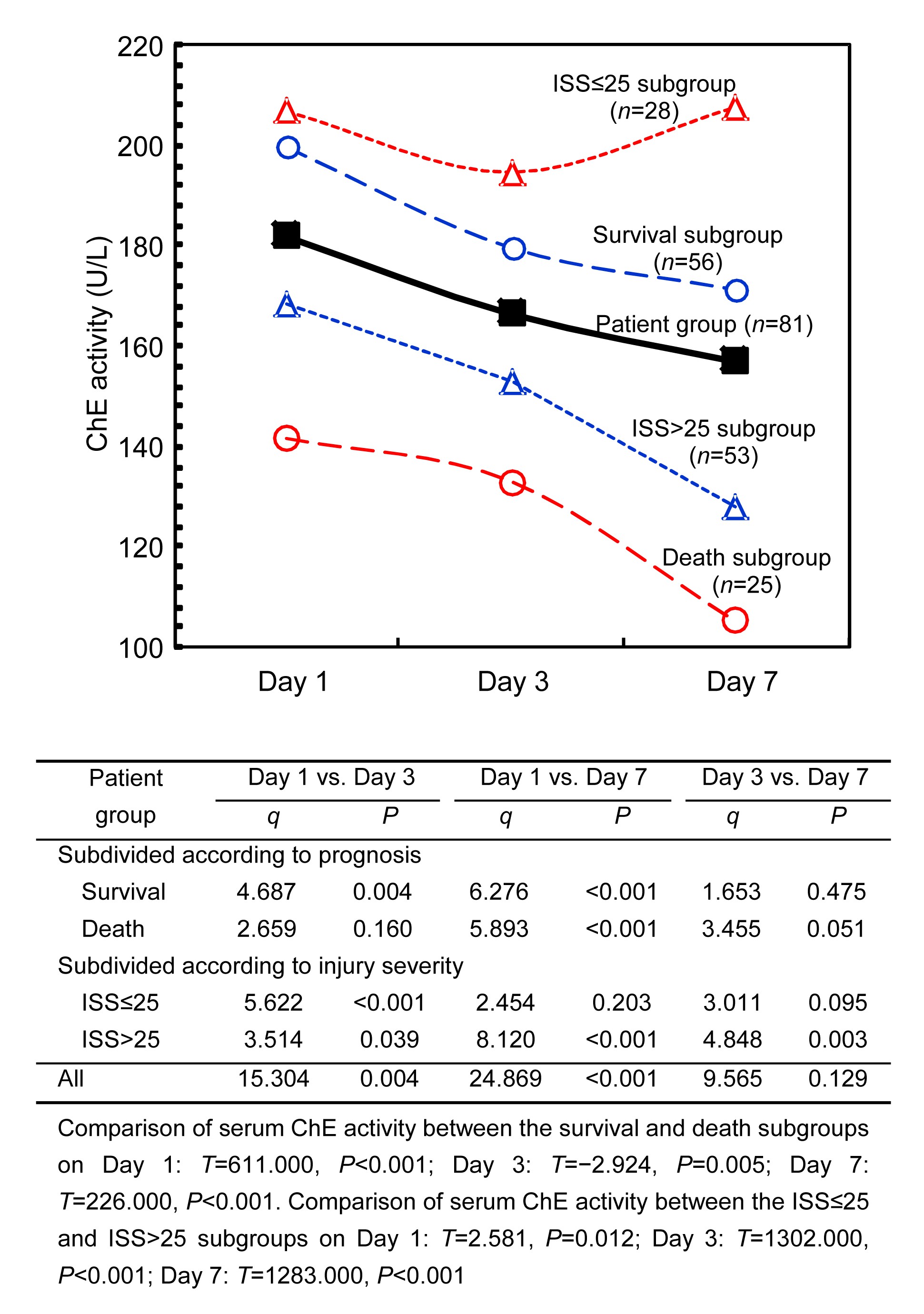 3.3.  Correlation between dynamic changes in serum ChE activity in trauma patients and the severity of the patient’s condition 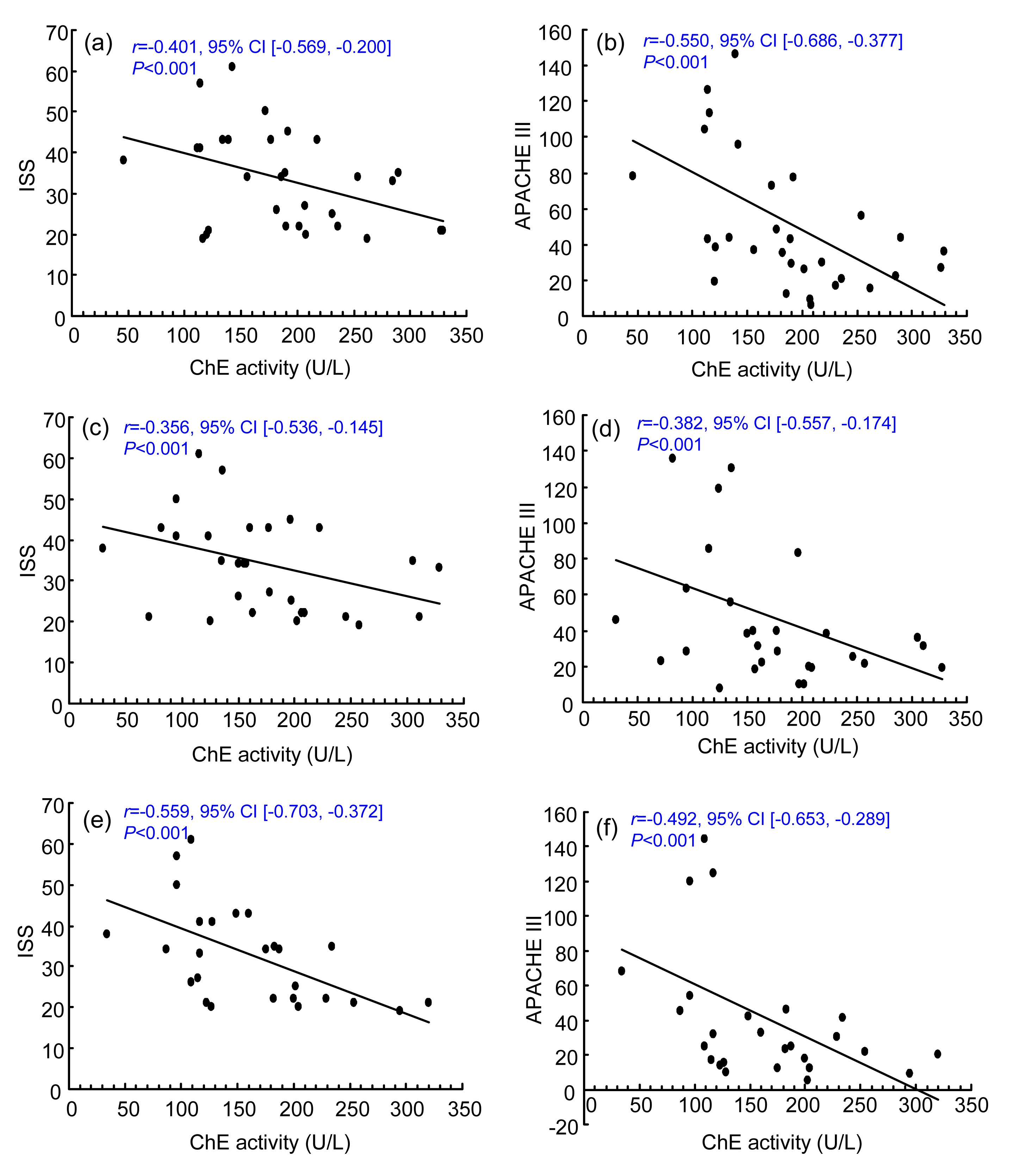 3.5.  Correlation between serum ChE activity and APPs after injury in patients with severe trauma

Non-specific inflammation occurs after severe trauma (Keel and Trentz, 2005). During this process, plasma proteins synthesized in the liver are defined as APPs when their concentrations increase or decrease by at least 25%. Some APPs, such as CRP, increase in concentration and are known as positive APPs. Conversely, other APPS, such as ALB, PAB, and TRF, decrease in concentration and are known as negative APPs (Gabay and Kushner, 1999). In the current study, ALB and CRP increased continuously, while PAB and TRF decreased after injury, similar to serum ChE activity, though exogenous ALB was provided for the purpose of treatment. Moreover, serum ChE was found to be significantly and positively correlated with ALB, PAB, and TRF at all time points and significantly and negatively correlated with CRP at all time points except post-injury Day 1. Thus, it appears that changes in serum ChE activity are consistent with negative APP concentrations and the correlations between them are significant. Furthermore, since proteins are synthesized in the liver and serum ChE activity was reduced by more than 25% (42.3%–50.2%) on Days 1, 3, and 7, compared with normal controls, serum ChE fits the definition of an APP and can be regarded as a negative APP (Chiarla et al., 2011; Lampón et al., 2012).

The mechanisms that underlie the decrease in serum ChE activity after severe trauma have not yet been fully elucidated. Kamolz et al. (2002b) proposed possible mechanisms for decreasing serum ChE activity in burns patients, including: (1) reduced hepatic synthesis of ChE due to impaired liver function; (2) hemodilution resulting from a large amount of fluid infusion during early resuscitation; (3) increased consumption of enzymes due to high catabolism induced by stress; (4) capillary leak syndrome, caused by shock, leading to increased extravascular transport of serum ChE. The mechanisms for reduced serum ChE activity after severe trauma may be similar to those above, though other factors, such as the inflammatory response (Kassab and Vijayakumar, 1995; Jin et al., 2011; Lampón et al., 2012), may play a role. During inflammation, ChE may act as a negative APP and participate in regulation of the inflammatory response.

In summary, serum ChE activity decreases significantly after injury in patients with severe trauma. A greater decrease appears to indicate a more severe injury and a poorer prognosis. Serum ChE activity after trauma was well correlated with APP concentration and may be regarded as a type of negative APP.


*&nbspProject supported by the Zhejiang Medical and Health Research Project (No. 2012KYB092), the Education Department of Zhejiang Province (No. Y201018337), and the Science and Technology Department of Zhejiang Province (No. 2012C33124), ChinaCompliance with ethics guidelines&nbspLi BA, Ding-qian WU, An-yu QIAN, Mao ZHANG, and Bing XIONG declare that they have no conflict of interest.