1. Changes in the physiological....2. Menaquinone-7 production from maize....3. Citric acid reduces the decline in....4. EDVAM: a 3D eye-tracking dataset for....5. Effects of dietary fresh fermented....6. Novel nano-microspheres containing....7. Improvement of xylanase production by....8. Influence of dietary conjugated....9. The protective effect of folic acid....

Abstract: The properties of the screened mutants for hyper-production of citric acid induced by carbon (12C6+) ion beams and X-ray irradiation were investigated in our current study. Among these mutants, mutant H4002 screened from 12C6+ ion irradiation had a higher yield of citric acid production than the parental strain in a 250-ml shaking flash. These expanded submerged experiments in a bioreactor were also carried out for mutant H4002. The results showed that (177.7–196.0) g/L citric acid was accumulated by H4002 through exploiting corn meal hydrolysate (containing initial 200.0–235.7 g/L sugar) with the productivity of (2.96–3.27) g/(L∙h). This was especially true when the initial sugar concentration was 210 g/L, and the best economical citric acid production reached (187.5±0.7) g/L with a productivity of 3.13 g/(L∙h). It was observed that mutant H4002 can utilize low-cost corn meal as a feedstock to efficiently produce citric acid. These results imply that the H4002 strain has the industrial production potentiality for citric acid and offers strong competition for the citric acid industry.

Citric acid fermentation is one of the largest biotechnological industries (Ikram-ul et al., 2004), and it has been proven that Aspergillus niger is the most effective strain for citric acid production by fermentation of carbohydrates (Lesniak et al., 2002) through secreting large amounts of enzymes into the environment for degrading carbon sources into small sugar molecules that are then used to serve as nutrients (de Bekker et al., 2011). According to various estimates, citric acids produced through fermentation are 1.7×106 t/a (Dhillon et al., 2011), but the industrial demands for citric acid are still increasing. Presently, China occupies a large market share in the citric acid industry all over the world, and the yield reached 0.94×106 t/a (Yang et al., 2013), but conventional citric acid fermentation biotechnology in China is not yet economically competitive. For instance, in 2008, the best citric acid production level of Chinese manufacturers was 146.9 g/L and the best productivity was 2.7 g/(L∙h) (Gao and Yang, 2010). A patent with citric acid concentration of 173 g/L and productivity of 2.66 g/(L∙h) was also reported by Zhang et al. (2013). Both are much lower than the advanced levels in the rest of the world (Hu et al., 2014).

High yield depends mainly on the strains used and the industrial production of citric acid by fermentation using cheap raw material is helpful to the economic development of a country (Majumder et al., 2009). Aiming to obtain high yields at a production scale level, a possible strategy is to improve the properties of the microbial production strain (Hu et al., 2014). Presently, as a novel mutagenesis technique, heavy ion irradiation has been referred to as a means of breeding new mutants of different microorganism, such as 12C6+ ion irradiation (Wang et al., 2009; Zhou et al., 2013). When compared with traditional physical or chemical mutagenic agents, such as X-rays or γ-rays, heavy ion beams induce a higher mutation rate and create a wide range of mutation types due to their higher linear energy transfer (LET) and greater relative biological effect (RBE) (Du et al., 2014). Progress has also been made in heavy ion mutation breeding of Clostridium tyrobutyricum, microalga Desmodesmus sp., etc. (Hu et al., 2013; Zhou et al., 2014). However, few reports concerning breeding of A. niger by heavy ion beams uniting corn meal hydrolysate as the feedstock in a bioreactor for hyper citric acid have been published (Hu et al., 2014).

In this study, we successfully screened a high yield strain of A. niger for citric acid by 12C6+ ion irradiation. In addition, the kinetics of citric acid production and sugar consumption in a bioreactor by this strain under different sugar concentrations was also studied.

A parental strain, preserved at the biophysics lab in the Institute of Modern Physics, Chinese Academy of Sciences, was maintained on potato-dextrose agar slants and stored at 4 °C in a refrigerator.

H4002, H1, H3, H4, and H5 were obtained after carbon ion irradiation. XHW2 and XHW3 were obtained after X-ray irradiation. The large diameter of transparent halos and morphology by a single colony on agar plates were employed for preliminary screening mutants. The agar plate contained 200 g/L potato juice, 20 g/L sucrose, 20 g/L agar, and 0.2 g/L bromocresol green. The fermentation medium was prepared with 0.25 g/ml corn meals, which were hydrolyzed by α-amylase at 95–98 °C for 30 min in a 10-L bioreactor. After being filtered, the supernatant hydrolysate was obtained with an initial pH 5.15. Corn meals were obtained from smashing corn grains. The medium used in all the studies of citric acid fermentation in the shake flash (250 ml) contained corn meal hydrolysate with sugar concentration 166.2 g/L and 5 g/L soybean cake. The medium was then autoclaved at 115 °C for 30 min.

Fermentation was carried out in a 50-L stirred tank reactor. The fermentation medium was prepared with the following source of carbohydrates. Corn meals (0.25 g/ml) were hydrolyzed by α-amylase at 60–72 °C for 30 min and 95–98 °C for about 10 min in the 50-L bioreactor. After centrifugal filtration, liquefying supernatant was obtained and diluted with tap water to the desired sugar concentration. The medium was then autoclaved at 118 °C for 30 min.

The concentration of citric acid in culture filtrate was measured by titration with 0.1429 mol/L sodium hydroxide using 0.5% phenolphthalein as an indicator. Total sugar was hydrolyzed by 6 mol/L vitriol at boiling temperature for 10 min into glucose and fructose, and then analyzed by a Fehling reagent (Jin and Cen, 2004). For the calculation of dry cell mass, the mycelium was thoroughly washed with tap water and dried to a constant weight after centrifugation of 5 ml fermentation broth at 4000 r/min for 5 min. All the experiments were repeated two or three times. 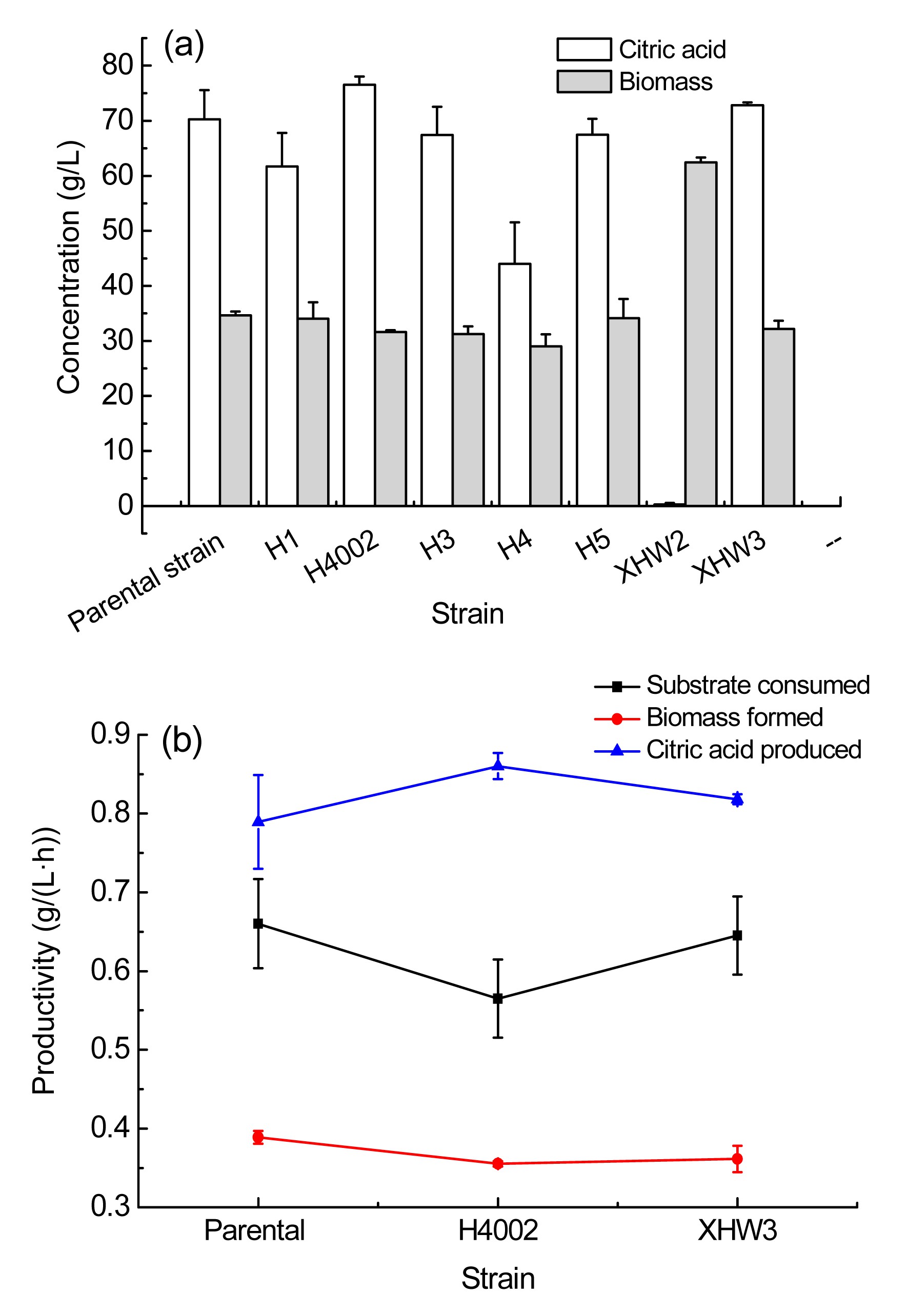 Fig.1
Citric acid productions of the parental strain and its mutant derivatives induced by 12C6+ ion and X-ray irradiations when grown in corn meal hydrolysate
(a) Citric acid and biomass concentrations. (b) Kinetic parameters for citric acid production. Culture conditions: temperature (36.8±0.4) °C, initial pH 5.15, fermentation time 89 h. Data are expressed as mean±standard deviation (SD), n=3 or 4
Specific productivities (g/(L∙h)), such as citric acid produced, biomass formed, and substrate consumed, are shown in Fig. 1b. Mutant H4002 exhibited the maximum production improvement (increased by 8.97%), low substrate consumption (decreased by 13.9%), and low biomass production (decreased by 8.66%) over the parental strain. In another word, H4002 utilized lower sugar consumption to produce more citric acids, which was helpful for material utilization. Consequently, it was proven that the mutant H4002 showed a high citric acid production and productivity through the shaking flash culture. 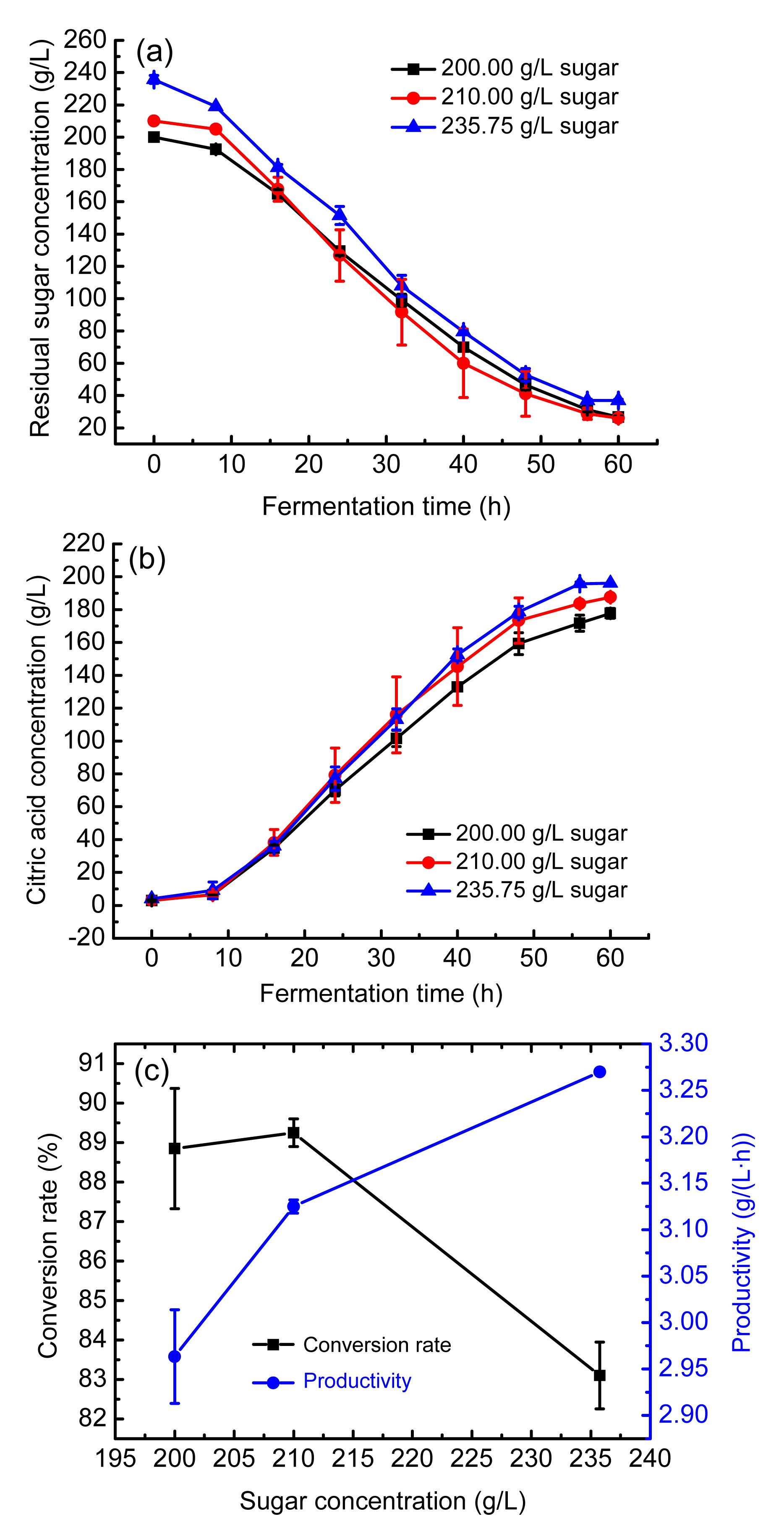 Although the molecular mechanisms of biological action of ion irradiation are not yet understood (Yang et al., 2007), as a novel irradiation technique, it deserves further attention due to its high LET and RBE, which can result in a wider mutation spectrum and higher ratio of mutation. Further work will be carried out to determine any additional benefits from changing the key genes in mutant H4002, compared with the parental strain. The improvement of the substrate consumption rate in the H4002 strain will also be studied.

To obtain mutants for hyper citric acid production, we used the accelerated carbon ions and X-rays as a tool to induce mutagenesis of A. niger. After the isolation of the irradiated A. niger, we successfully obtained a mutant, named H4002, with enhanced citric acid production, which was screened from carbon ion irradiation. Under the optimized culture condition in a bioreactor, H4002 exhibited (187.5±0.7) g/L citric acid accumulation and it implied that the H4002 strain has the industrial production potentiality for citric acid and offers a strong competition for the citric acid industry.

The authors are grateful to all the staff of the Heavy Ion Research Facility in Lanzhou (HIRFL), China, for providing the carbon beams.