1. Establishment of reference mandibular....2. Contour changes in human alveolar....3. Three-dimensional evaluation of upper....4. A pilot study on diagnosis of....5. Association between mandibular....6. Assessment of cortical bone....7. Surface texture evaluation of....8. Theory and techniques for....9. Use of 3-D magnetic resonance....

Tooth extraction is one of the most common dental treatments. Oral implant dentures are becoming a preferred choice for increasing numbers of patients with dentition defects or edentulous jaws after tooth extraction. Sufficient alveolar bone volume and favorable contour of the alveolar process are essential to obtain optimal functional and aesthetic prosthetic reconstructions. Successful osseointegration of dental implants requires an accurate evaluation of the recipient site. Therefore, knowledge about the healing process at extraction sites, including contour changes caused by bone resorption, is essential for planning treatment.

Since the 1940s, many studies have focused on the histological healing process of the extraction socket. Because of the restrictions of medical ethics, most of these studies were animal experiments (Araujo and Lindhe, 2005). So far, limited by research methodology, little accurate, non-invasive, and scientific systematic research has been conducted on dimensional changes of human alveolar bone after tooth extraction. Some researchers performed flap elevation and placed titanium pins in the labial alveolar bone as markers at the time of tooth extraction. After three months of healing of the extraction socket, a full-thickness flap was elevated again to measure the width and height of the alveolar ridge at the titanium pins (Lekovic et al., 1998; Camargo et al., 2000). This method partially cuts off the gingival blood supply to the alveolar bone, making tooth extraction no longer the sole factor causing alveolar bone resorption (Fickl et al., 2008). It is well established in the periodontal literature that crestal alveolar bone loss after a full-thickness flap elevation is about 0.6 mm (Wood et al., 1972). Some researchers have used the method of taking impressions and then comparing contour changes on plaster models (Lam, 1960; Johnson, 1969; Schropp et al., 2003). This method failed to exclude gingival recession after tooth extraction.

Periapical X-rays and panoramic radiographs can be used to observe vertical changes in the human alveolar ridge, but they cannot acquire horizontal changes due to the X-ray projection angle. The application of computed tomography (CT) and cone-beam computed tomography (CBCT) has completely overcome the limitation that only two-dimensional images were available using traditional imaging equipment. CBCT is a new technique developed in the late 1990s. Compared to traditional spiral CT, CBCT uses less than 2% of the CT radiation dose (Cohnen et al., 2002; Ngan et al., 2003; Schulze et al., 2004), and therefore has little effect on patients. The NewTom VG CBCT scanner used in our hospital has a radiation dose as low as 42 μSv, which is in accordance with the minimally invasive approach required in clinical trials. CBCT also offers higher spatial resolution and image sharpness. It reduces the slice thickness of each image to tens of micrometers, which is indispensable for precisely observing the fine structure of the oral and maxillofacial region (Loubele et al., 2007). CBCT generates volumetric data via scanning. Various flat or curved planes on which quantitative measurements are made can be easily accessed by image reconstruction.

Sixty patients (32 males and 28 females), aged between 22 and 56 years, were selected from the CBCT database of the Oral Implantology Center at Beijing Stomatological Hospital affiliated to the Capital Medical University, China. The inclusion criteria were: (1) The patients had a tooth extracted because of injury or endodontal or periapical disease. (2) Each patient had two CBCT scans. One was taken a couple of days before the implant surgery to examine the bone volume and quality. The other was taken 7–10 d after the surgery to examine the initial osseointegration. (3) At least one molar (wisdom teeth were not included) and one premolar were present on the same maxillary left or right side. And at least three teeth were present in the molar and premolar regions. That is, at most one tooth was missing in the molar and premolar regions. (4) The teeth mentioned above had no progressive periodontal disease and received no treatment in the interval between the two CBCT scans. Fig.1
Orientation of the horizontal slice Ax R by the joint (reference point), where the three roots of molar D started to separate in two CBCT scans
A line was drawn from the reference point of D to the pulp center of M on the horizontal slice Ax R (Fig. 2). Serial sagittal slices were reconstructed based on the line. The sagittal slice that passed through the reference point of D was named Cx R. Among CBCT I sagittal slice series, if the test tooth T was a maxillary first molar, the slice that passed through the pulp center of its palatal root was oriented. If T was a maxillary second premolar, the slice that passed through its pulp center was oriented. The oriented sagittal slice was named Cx T. The number of sagittal slices between Cx R and Cx T was calculated as N (Fig. 3). The alveolar ridge width of the test tooth T was measured at the site of Cx T on Ax R (Fig. 4). The whole tooth length of the palatal root of molar D or of the second premolar M was measured on Cx T (Fig. 5). 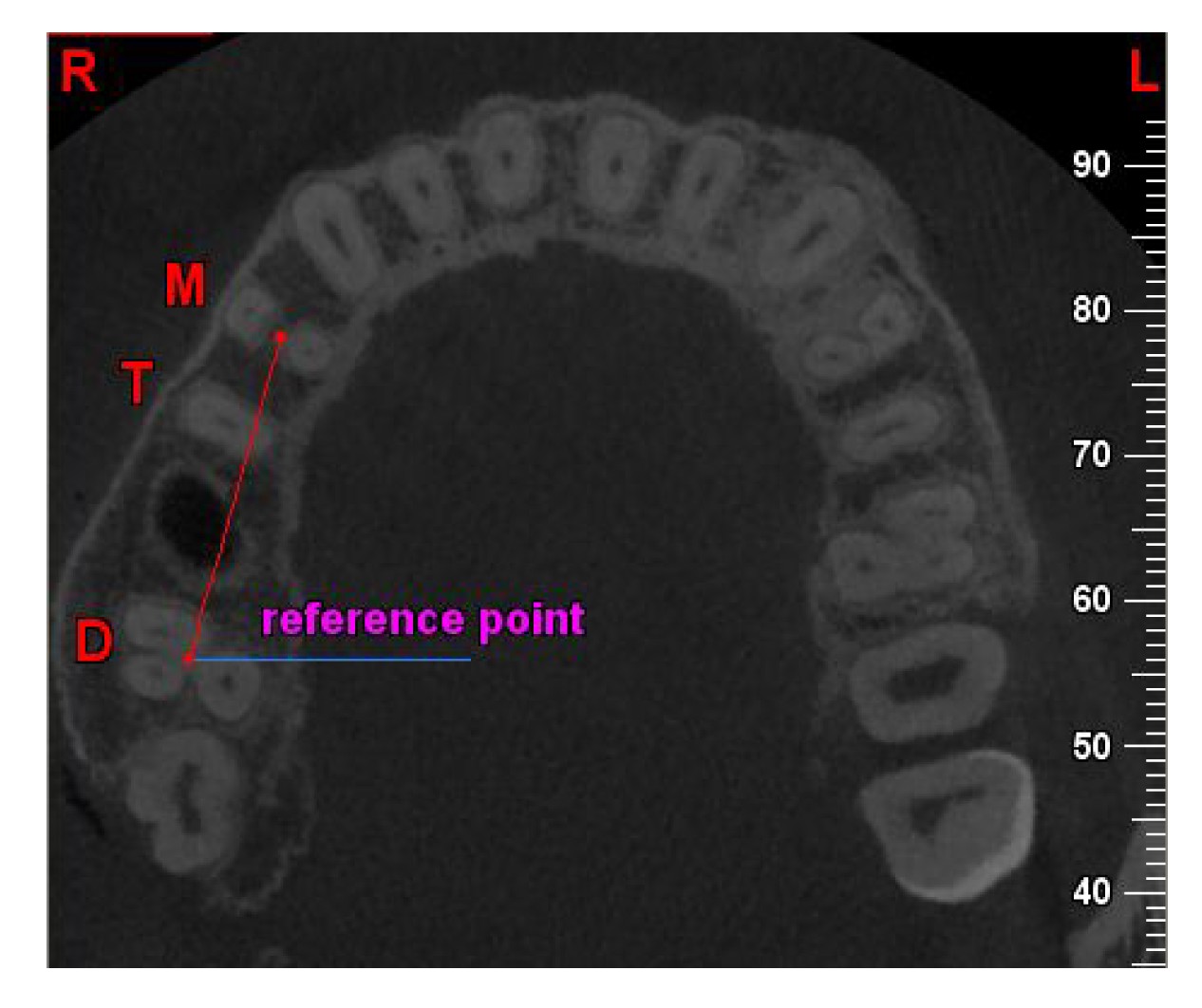 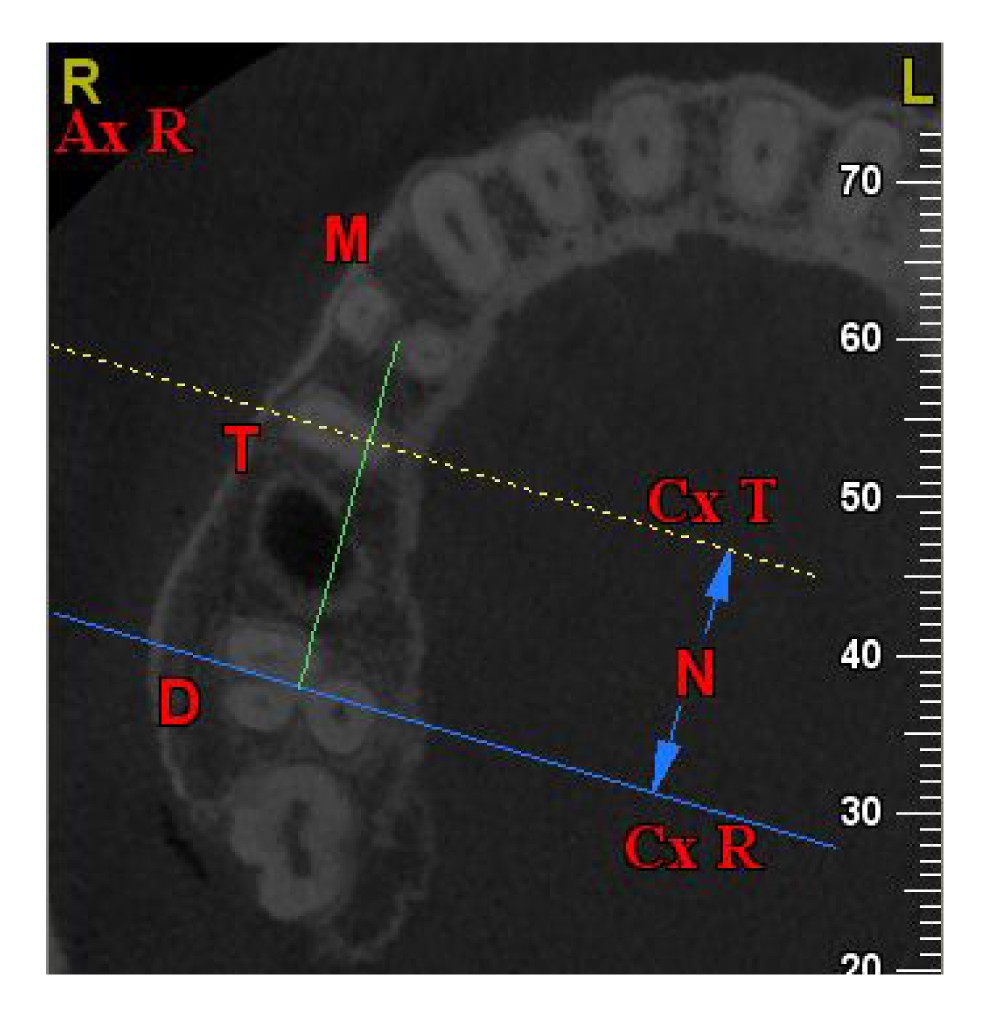 Fig.3
Calculation of the number of moved sagittal slices between Cx R and Cx T as N in CBCT I 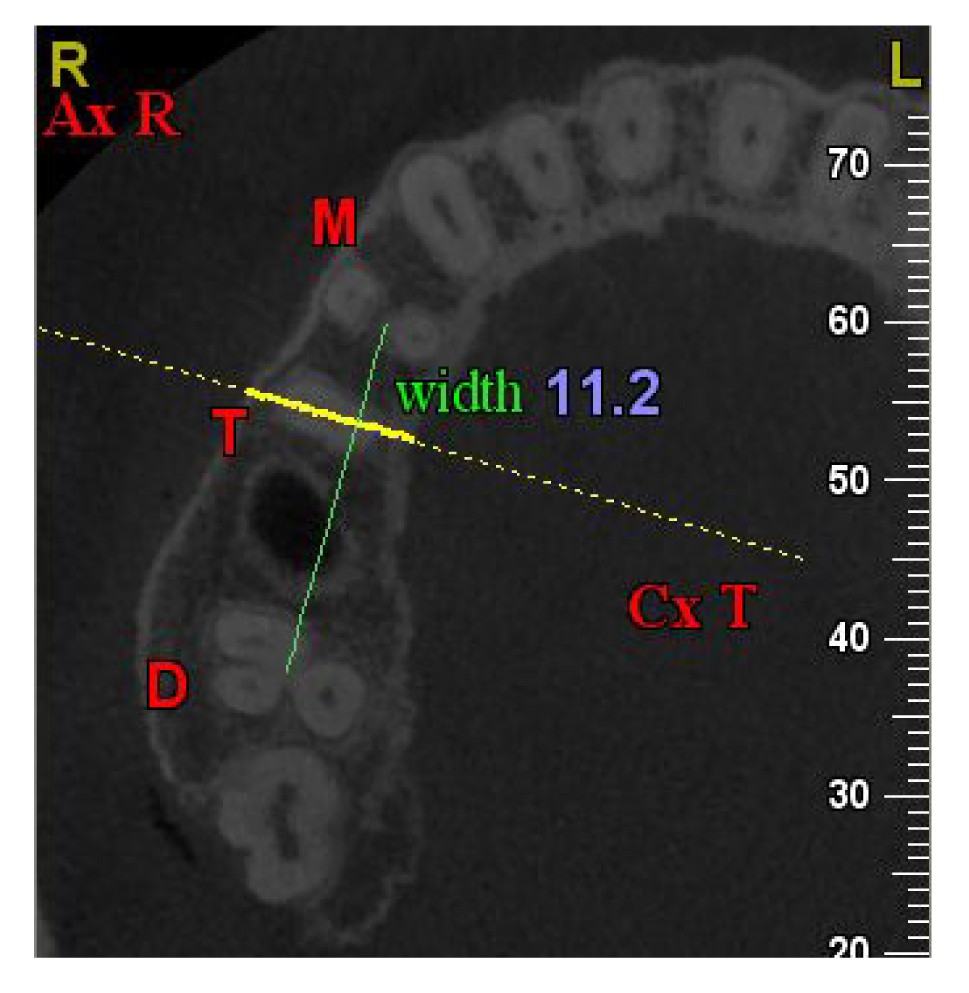 Fig.4
Alveolar width at the site of Cx T on Ax R in CBCT I 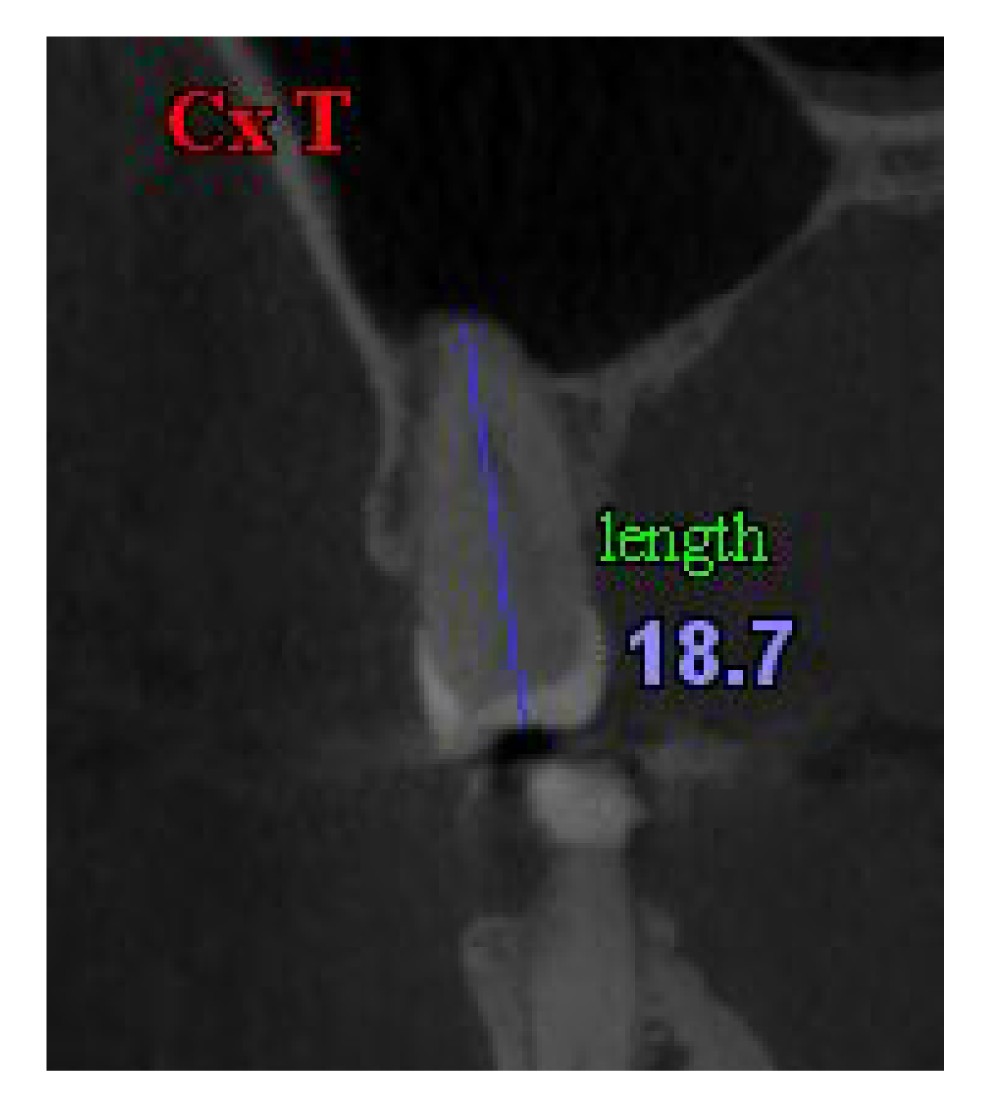 Fig.5
Tooth length on Cx T in CBCT I
Among CBCT II slice series, the slice was first oriented to Ax R (Fig. 6) and then to Cx R. The same number of sagittal slices N was taken from Cx R to orient Cx T (Fig. 7). The alveolar ridge width of the test tooth was measured at the site of Cx T on Ax R (Fig. 8). The whole tooth length was measured on Cx T (Fig. 9). 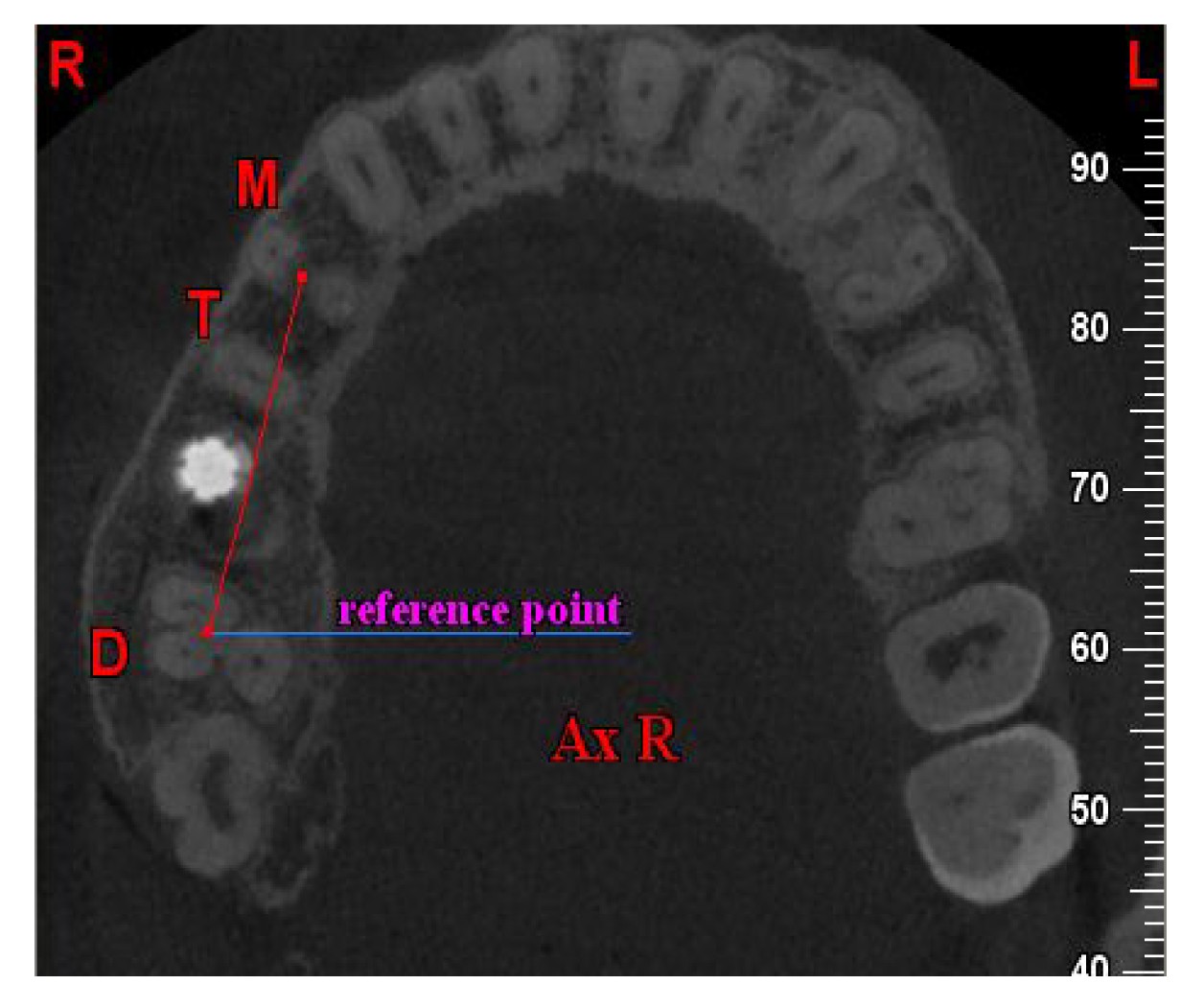 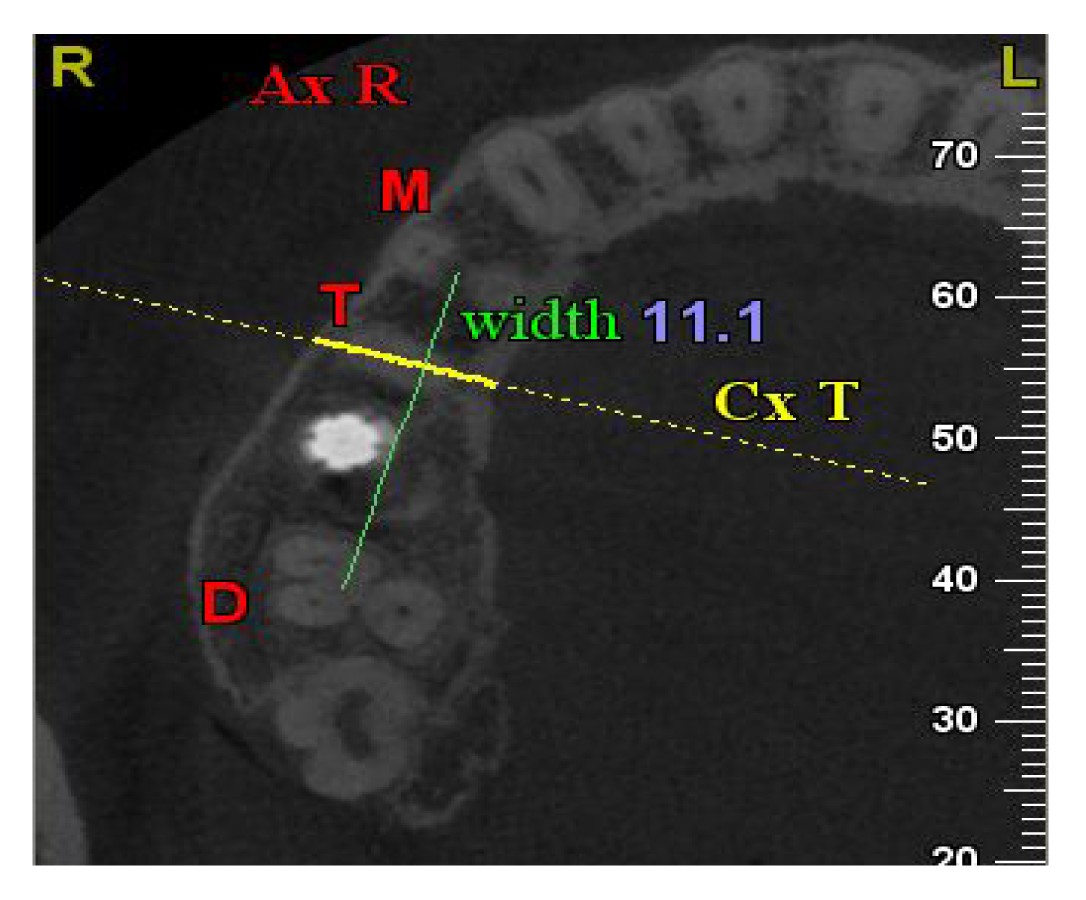 Fig.8
Alveolar width at the site of Cx T on Ax R in CBCT II 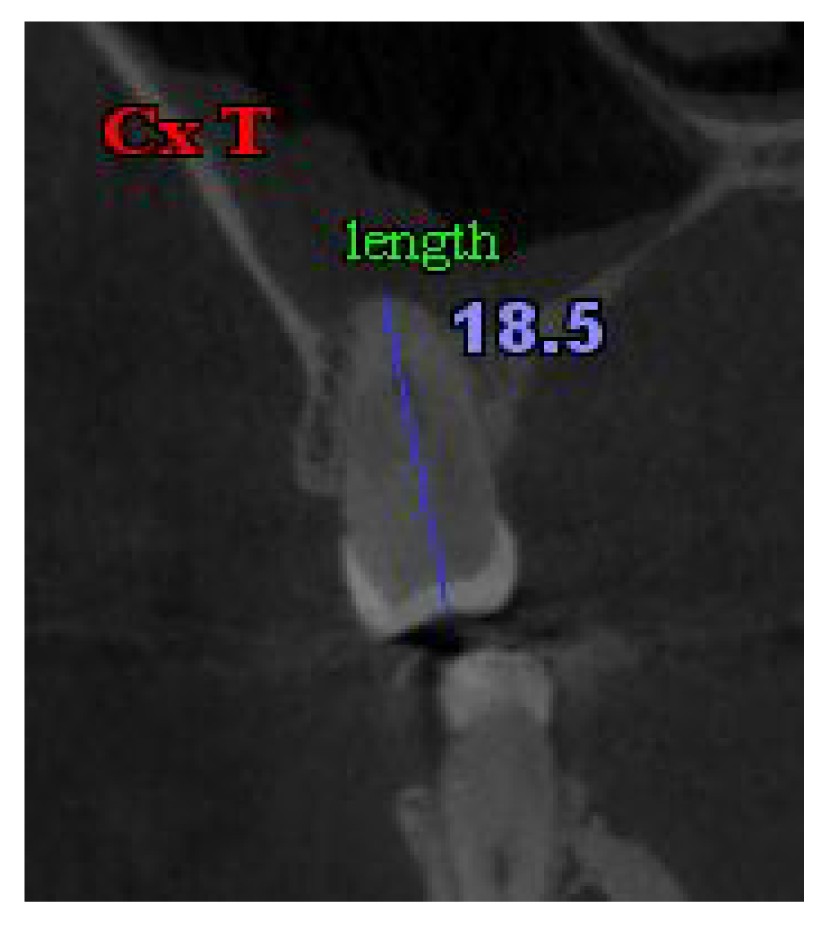 To test the intraobserver reliability, five patients were randomly selected from the sixty patients. Only CBCT I was used. Orientations of Ax R of each patient were repeated. Measurements of tooth length and alveolar ridge width based on one oriented Ax R were repeated. Orientations and measurements were carried out on two days, one week apart, and five times each day. The intraclass correlation coefficient (ICC) for absolute agreement based on a one-way random effects analysis of variance (ANOVA) was calculated using SPSS 18.0 software (SPSS Inc., Chicago, USA). Means and standard deviations of the tooth length and alveolar ridge width were calculated using SPSS. Paired sample t-tests were performed. A P value <0.05 was selected to indicate a significant difference.

The intraobserver reliability, assessed by the ICCs, was high. The length of the whole tooth and the width of the alveolar ridge of the test tooth measured from two CBCT scans are shown in Table 1. Paired sample t-tests of both measurements showed no statistically significant differences.

Tooth length and alveolar ridge width of the test tooth measured from two CBCT scans
Many studies have demonstrated that the height and especially the width of the alveolar ridge decrease significantly after tooth extraction (Lam, 1960; Pietrokovski and Massler, 1967; Johnson, 1969; Jahangiri et al., 1998; Schropp et al., 2003; Araujo and Lindhe, 2005; Kerr et al., 2008; van der Weijden et al., 2009). A clinical study reported a reduction of 50% in the width of the alveolar ridge at 12 months and an average bone loss of between 5 and 7 mm (Schropp et al., 2003), leading to insufficient bone volume at the implant site. Although much attention has been paid to bone remodeling and dimensional changes during socket healing after tooth extraction, most of the research methods were not ideal or precise.

CBCT is a new technique with the advantages of rapid scan speed, high resolution, low effective radiation dose, and high radiation efficiency. It is ideal for clinical applications (Hatcher et al., 2003; Vannier, 2003). In this study, we tested whether CBCT can be used to observe dimensional changes in the human alveolar ridge continuously after tooth extraction.

Tooth length was measured on the sagittal slice. The comparison of test tooth length verified the accuracy of vertical orientation. The alveolar bone width was measured on the horizontal slice. However, the site for width measurement was determined by the orientation of the sagittal slice. The comparison of alveolar bone width verified the accuracy of both the horizontal and vertical orientations.

CBCT serial sagittal slices were reconstructed along a line connecting reference points. At least two fixed anatomic points, which could be discerned easily in different CBCT scans of the same patient, were referenced. The first reference point was set where the three roots of a maxillary molar started to separate and also seemed to begin to fuse into a whole. According to Xie (2005), the average ratios of crown to root for a maxillary first and second molar are 37/63 and 38/62, respectively. The root furcation area of a maxillary molar is in the middle third section of the whole tooth. By setting the joint of molar roots in the furcation area as a reference point, a clear view of the root apex and the occlusal surface of the test tooth could be acquired on the sagittal slice image. Furthermore, the line between the first reference point and the pulp center of a premolar, the second reference point, divided the alveolar bone into two average parts in a buccal-palatal direction. This average distribution was essential to the measurements. It avoided different tooth images overlapping or hiding each other in the sagittal slice, enabling the test tooth to be easily found and precisely measured on the sagittal image. At the site of Cx T on Ax R, the perpendicular to the line connecting the reference points divided the test tooth into two roughly average parts in a mesial-distal direction, which made it possible to measure the alveolar bone width accurately.

The orientation method proposed by this study makes measurements comparable in a more scientific way. By referencing a fixed anatomic point, the same horizontal slice from different CBCT scans of one patient could be found. By moving the same number of sagittal slices as originally recorded, the same sagittal slice could be found. This orientation method makes it possible to conduct observations at the same site continuously and at different time points. However, there are still limitations to the orientation method. The fixed anatomic reference points in this study were confined to maxillary molar and premolar regions where the small arc of the alveolar bone could be neglected. If the second reference point was chosen anterior to the premolar region, it would be hard to get the average distribution of the alveolar bone in the buccal-palatal direction, making the measured value of the alveolar width larger than the real value.

Most patients in the database of the Oral Implantology Center received CBCT mainly for posterior maxillary implant therapy together with sinus augmentation. Sixty patients who had two CBCT scans, one before and one after implant therapy, were selected from the database. This study made full use of CBCT scans that already existed. With no extra expenditure and no harm to patients, the method meets the demands of medical ethics in clinical trials.

This study has proved that CBCT is a reliable imaging tool for continuously observing dimensional changes in the human alveolar ridge after tooth extraction. Projection differences between scans taken at different time points from one patient could be neglected without influencing the accuracy of millimeter scale measurements.

We sincerely thank Dr. Yan-ting HE (Oral Implantology Center at Beijing Stomatological Hospital Affiliated to the Capital Medical University, China) for encouragement and assistance for this study.


*&nbspProject supported by the National Natural Science Foundation of China (No. 81371115)Compliance with ethics guidelines&nbspBei LI, Yao WANG, and Jun LI declare that they have no conflict of interest.

good,could I get the full text?