Dioscorea bulbifera L. (Dioscoreaceae) rhizome is widely distributed throughout the tropics and temperate regions, especially in Asia, and in China, it has been traditionally used to treat thyroid disease and tumors (Gao et al., 2002). In addition, in northern Bangladesh, it is used to treat tumors and leprosy (Murray et al., 1984). Our laboratory studies have shown that D. bulbifera rhizome can induce hepatotoxicity (Wang et al., 2010; 2011), which emphasizes a potential toxicity in the clinical setting. Among the biologically active substances in D. bulbifera rhizome, a major class is the clerodane diterpenoids (Wang et al., 2009; Liu et al., 2010). Diosbulbin B is the major chemical compound of the clerodane diterpenoids in D. bulbifera rhizome (Kawasaki et al., 1968), and has been found to have anti-tumor activity (Gao et al., 2002; Wang et al., 2012).

Angelica sinensis (Oliv.) Diels root has been reported to prevent the hepatotoxicity induced by D. bulbifera rhizome (Liu et al., 2004), while the active compound has not yet been elucidated. Ferulic acid is one of the main bioactive molecules in A. sinensis root, and always acts as a strong anti-oxidant; it is known for treating skin cancer, ageing, fatigue, and muscle wasting (Graf, 1992; Alias et al., 2009; Barone et al., 2009; You et al., 2009). There are reports that ferulic acid prevents noise-induced hearing loss and free radical-induced skin damage (Calabrese et al., 2008; Fetoni et al., 2010), but whether it affects the hepatotoxicity and anti-tumor activity of diosbulbin B is still unknown.

The present study is designed to demonstrate the protection by ferulic acid against the hepatotoxicity induced by diosbulbin B and the underlying mechanism, and investigate whether ferulic acid enhances diosbulbin B-inhibited tumor growth.

ICR male mice (18–22 g) were purchased from the Shanghai Laboratory Animal Center of Chinese Academy of Sciences, China. Animals were given rodent laboratory chow and water ad libitum, and maintained under controlled conditions at (22±1) °C, relative humidity (65±10)%, and a 12 h/12 h light/dark cycle (lights on at 7:00 am). All animals were dealt with in compliance with the institutional animal care guidelines of the Experimental Animal Ethical Committee of Shanghai University of Traditional Chinese Medicine, China.

Mouse sarcoma S180 tumor cells were maintained in the peritoneal cavities of ICR mice in the Laboratory of Experimental Oncology of the Shanghai Laboratory Animal Center of Chinese Academy of Sciences, China.

2.4.  Preparations of diosbulbin B and ferulic acid 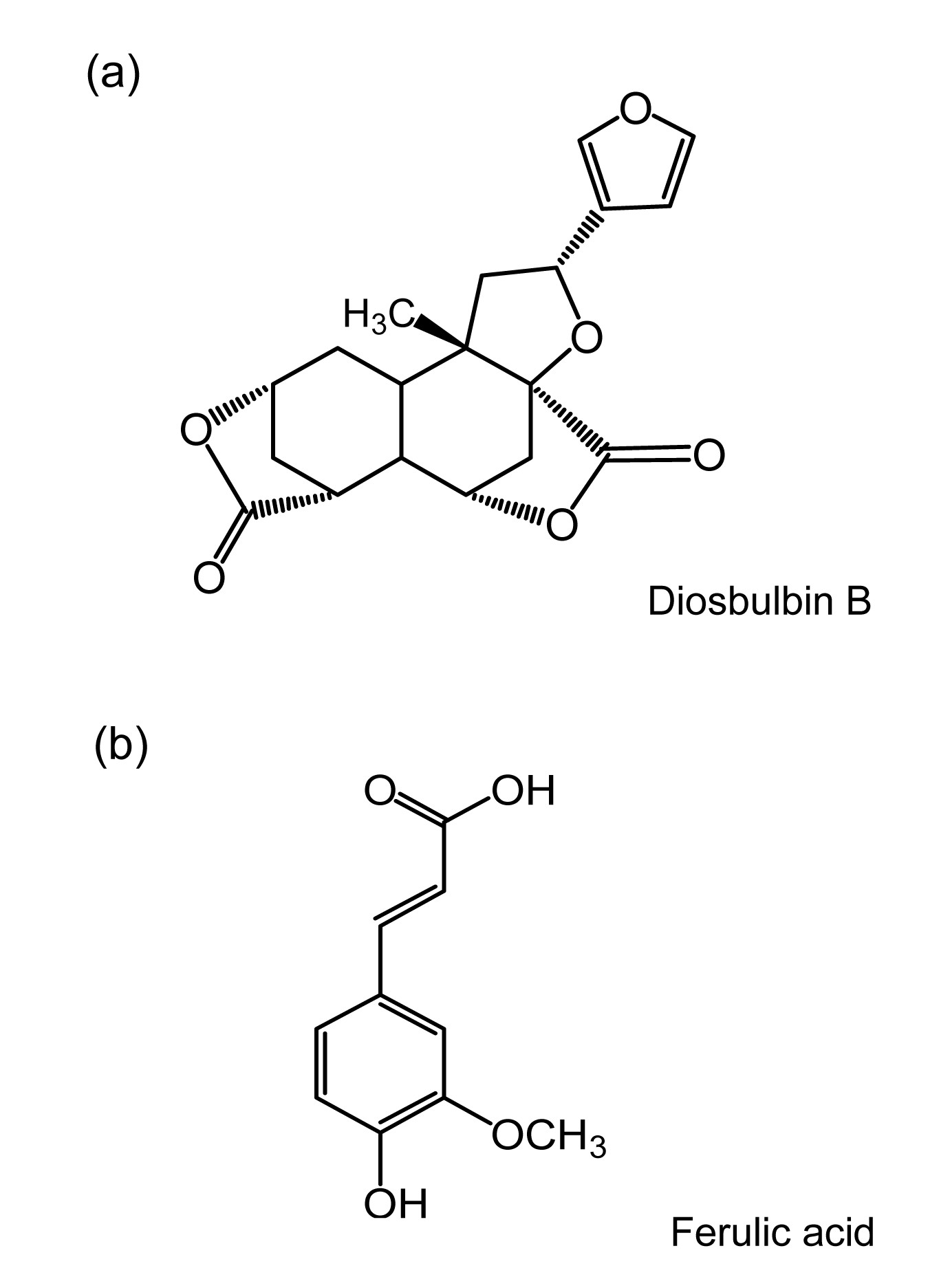 Fig.1
Chemical structures of diosbulbin B (a) and ferulic acid (b)

Ascites of the mouse sarcoma S180 were drawn out from mice under aseptic conditions. Cells were counted promptly and then diluted to about 1×107 cells/ml with aseptic saline. The diluted S180 cell suspension was inoculated subcutaneously (0.1 ml per mouse) into the right armpit (Bezerra et al., 2008).

One day after inoculation, mice, except for the normal (non-tumor-inoculated) animals, were randomly divided into five groups of eight mice each. 5-Fluorouracil-treated mice were injected intraperitoneally with 5-fluorouracil at a dose of 25 mg/kg once every other day. Normal (non-tumor-inoculated) and control (tumor-inoculated) groups of mice received daily oral administration of 0.5% (5 g/L) sodium carboxyl methyl cellulose (CMC-Na; 0.2 ml/10 g). The other three groups received ferulic acid (8 mg/kg), diosbulbin B (32 mg/kg), or diosbulbin B (32 mg/kg) plus ferulic acid (8 mg/kg) by intragastric administration for 12 d starting from 24 h after tumor inoculation. After treatment, mice were sacrificed by cervical dislocation after peripheral blood samples, liver tissues and tumors were collected at 24 h after the last administration. Serum samples were collected for the determination of alanine transaminase/aspartate transaminase (ALT/AST), and liver tissues were used for the analysis of the lipid peroxide level, histological observation, determination of glutathione-related and anti-oxidant enzymes, and mRNA expression of the main anti-oxidant enzymes. The tumors were weighed, arrayed in line on paper, and taken pictures. The tumor inhibition ratio (IR) was calculated by the formula of IR=[(C−T)/C]×100%, where C and T are the mean tumor weights of the control group (CMC-Na) and the treated group, respectively.

Blood samples were obtained from mice of all groups (eight mice per group) for the determination of ALT and AST. Serum ALT and AST were assayed according to Kamei et al. (1986).

After fixation in formaldehyde, the livers were examined for size, color changes, and hemorrhage. Slices of liver were cut into small pieces and histological sections were stained with hematoxylin and eosin (H&E) for the observation under light microscopy.

Tissues were homogenized in cold PBS, and then centrifuged at 5000×g for 5 min and the supernatant transferred to new tubes for assay. The liver tissue activities of CuZn-SOD and CAT were determined as previously described (Marklund and Marklund, 1974; Aebi, 1984), and the results were all calculated based on tissue protein concentrations.

Serum ALT and AST activities are liver injury biomarkers, a significant elevation of which often reflects liver injury (Kamei et al., 1986). In the present study, ALT and AST were both found to be raised in mice treated with diosbulbin B alone for 12 consecutive days compared with CMC-Na controls (P<0.001), while ferulic acid inhibited this diosbulbin B-induced increase (P<0.001) (Fig. 2). 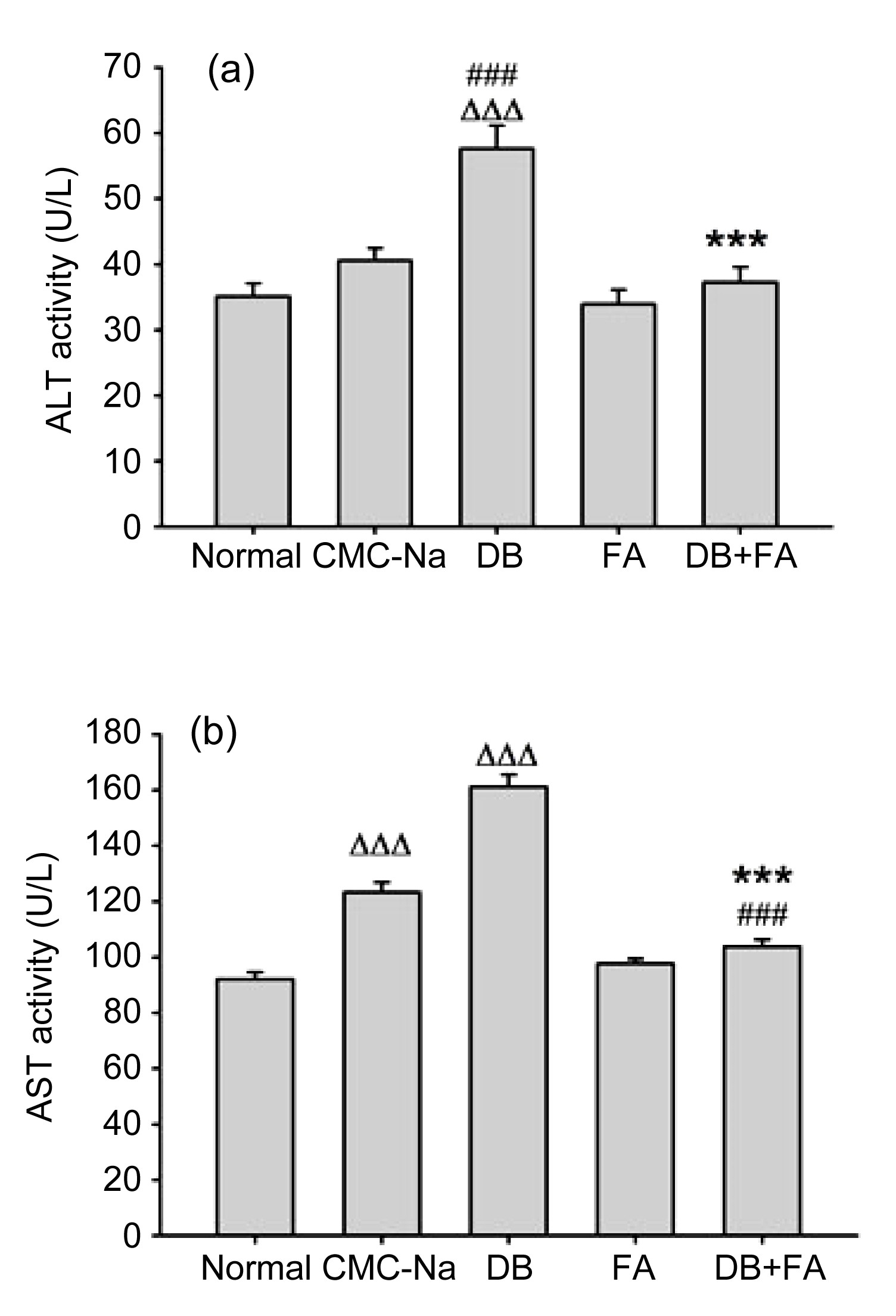 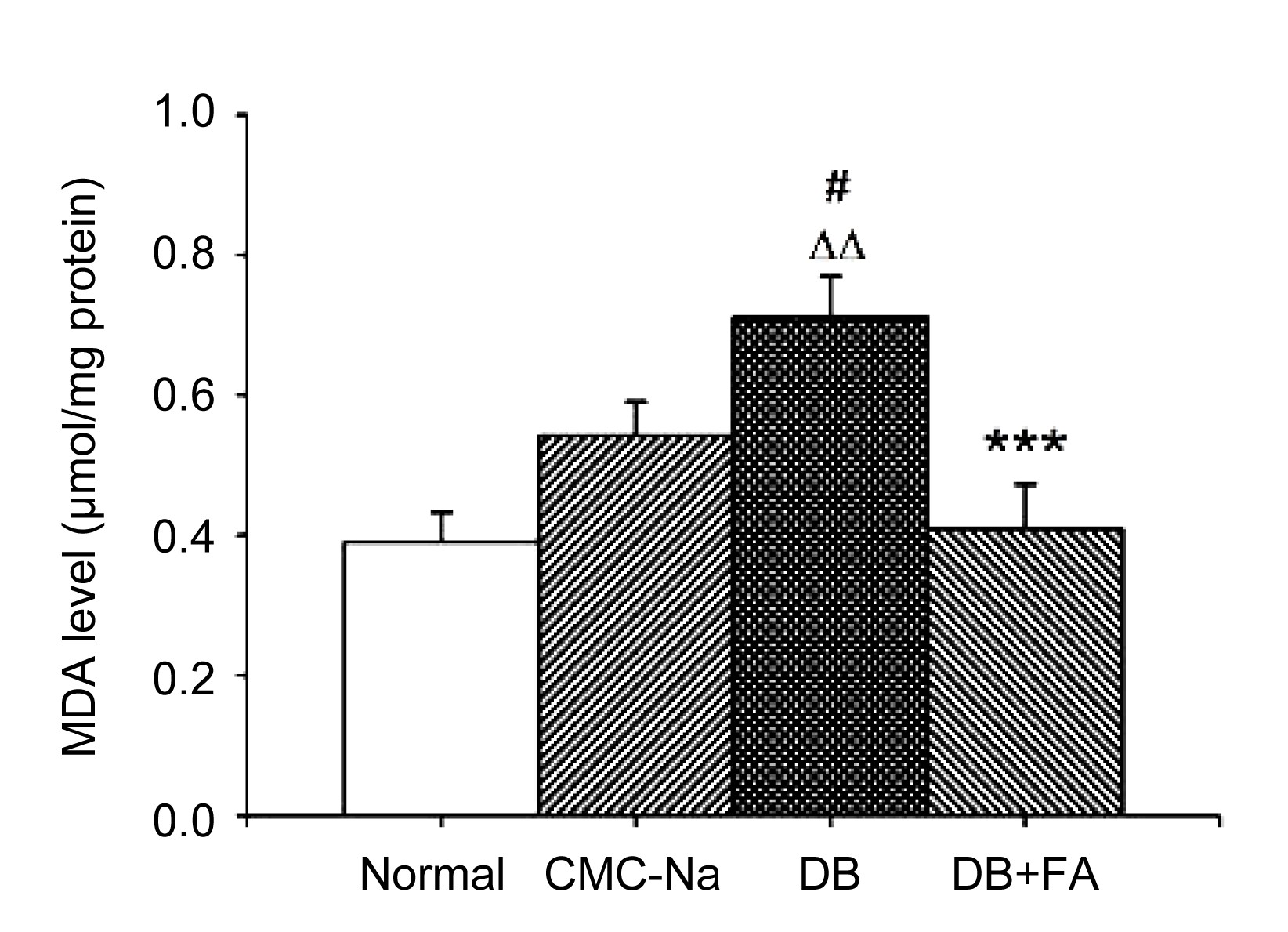 Fig.4
Liver histology of the normal (a), CMC-Na control (b), diosbulbin B (32 mg/kg) (c), and diosbulbin B (32 mg/kg)+ferulic acid (8 mg/kg) (d) groups
After treatment, livers were removed, fixed, sectioned (5 μm), and processed for H&E staining. Typical images were chosen from each experimental group (original magnification 200×)

CAT and CuZn-SOD are both important intracellular anti-oxidant enzymes, participating in the process of oxidative stress (Aebi, 1984; Zelko et al., 2002). Our results showed that diosbulbin B decreased the enzymatic activities of CuZn-SOD and CAT compared with CMC-Na controls (P<0.05 and P<0.01, respectively), while ferulic acid reversed this decrease (both P<0.01) (Figs. 5a and 5b). Further results (Fig. 5c) showed that in the CMC-Na control group, mRNA expressions of CAT and CuZn-SOD were decreased compared with the normal (P<0.05 and P<0.001, respectively). The mRNA expressions of CAT and CuZn-SOD in diosbulbin B-treated mice were further decreased compared with the CMC-Na group (both P<0.01), while ferulic acid clearly reversed this decrease (P<0.05 and P<0.01, respectively). 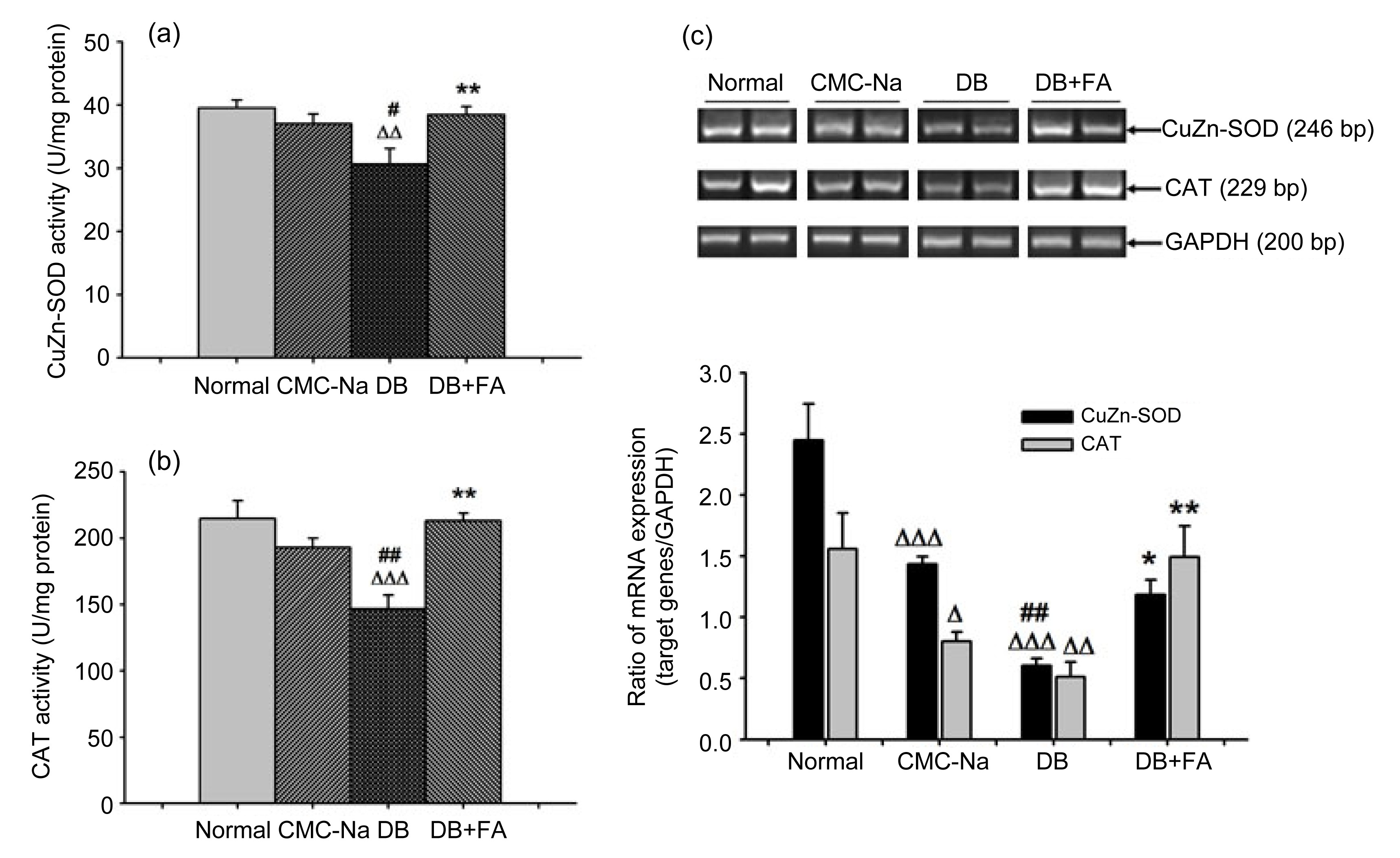 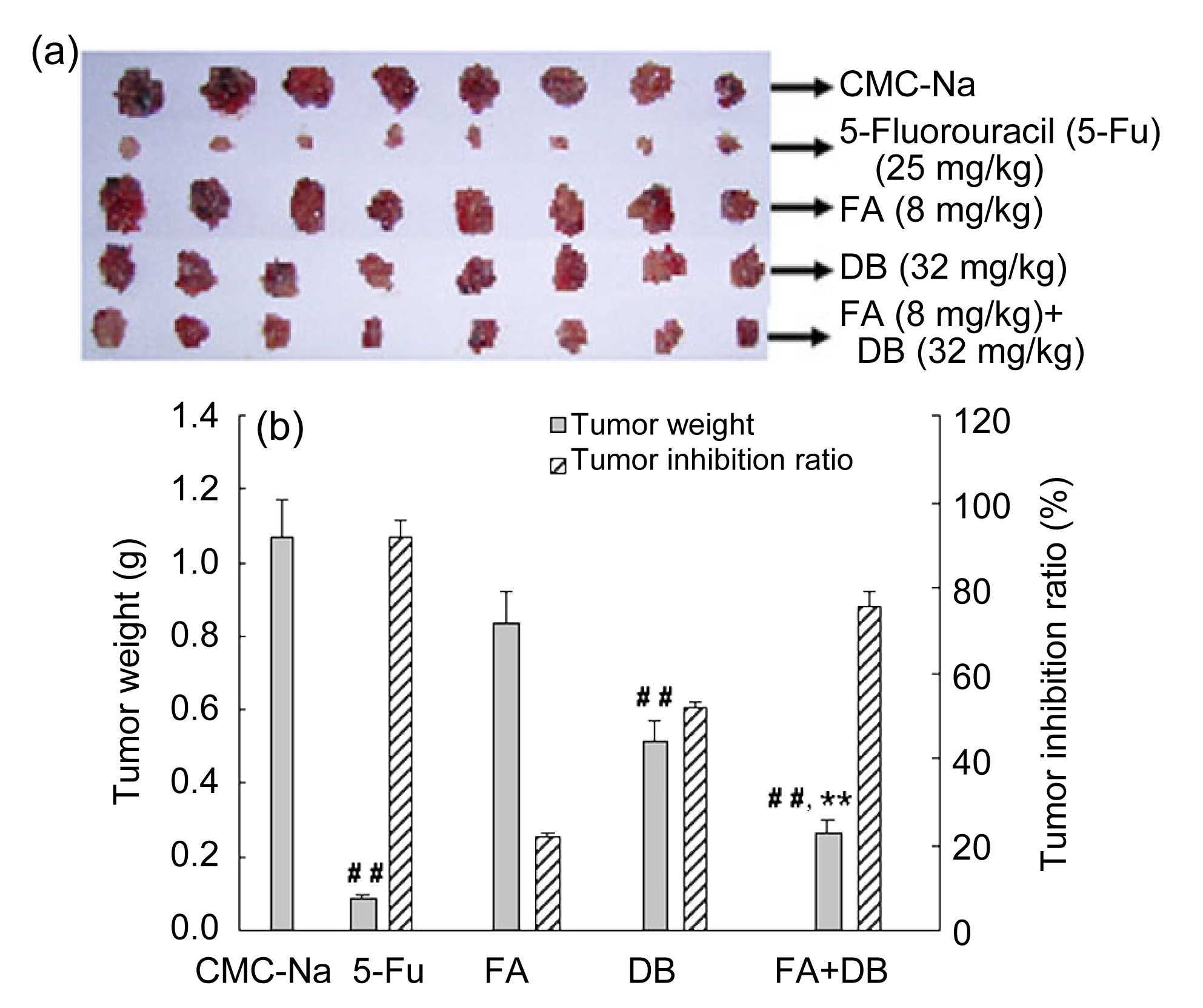 Fig.6
Effect of ferulic acid (FA) on anti-tumor activity
FA augmented diosbulbin B (DB)-induced anti-tumor activity in vivo. After treatment, the tumors were excised and weighed. (a) Pictures of tumor; (b) Tumor weight and the inhibitory ratio of tumor growth. Data are presented as mean±SEM (n=8). ## P<0.01 vs. CMC-Na; ** P<0.01 vs. DB

Much attention has been paid to the prevention of cancer (Glade, 1999). In addition to western therapies for cancer prevention, there are also studies on anti-tumor effects of herbal medicines such as D. bulbifera, Tripterygium wilfordii, and Andrographis paniculata (Shamon et al., 1997; Gao et al., 2002; Kumar et al., 2004). Compatibility is a main principle of Chinese medicinal herbs, and some reports have demonstrated that compatibility may lead to eliminating toxicity or reinforcing bioactivities (Kim et al., 2007; Gao et al., 2009). Ferulic acid is the main bioactive component of A. sinensis root, and our results from ALT/AST assays and histological observations are the first to demonstrate that ferulic acid prevents diosbulbin B-induced liver injury. Furthermore, the results show that ferulic acid enhances the diosbulbin B-induced anti-tumor effect. All these results indicate that the compatibility of A. sinensis root with D. bulbifera may relieve the hepatotoxicity caused by D. bulbifera, and provide the possibility of clinical applications of these two drugs for cancer therapy.

The imbalance of oxidants and anti-oxidants will lead to oxidative stress in the liver. Further, many anti-oxidant enzymes and non-enzymatic anti-oxidants may be changed during this process (Łuczaj and Skrzydlewska, 2004; Dadkhah et al., 2006; Limón-Pacheco and Gonsebatt, 2009). Among them, lipid peroxide is free radical-related (Romero et al., 1998), and one of the main end-products of lipid peroxide is malondialdehyde. The results show that ferulic acid inhibited the diosbulbin B-induced increase in malondialdehyde, indicating that ferulic acid can prevent diosbulbin B-induced lipid peroxide injury in the liver.

CAT and SOD are believed to play key roles in the enzymatic defense of cells against oxidative stress injury. CAT mainly exists in the peroxisomes of aerobic cells and serves to protect against damage from hydrogen peroxide by catalyzing it into molecular oxygen and water without producing toxic free radicals (Bocchetti and Regoli, 2006; Yilmaz et al., 2006). The metalloenzyme, SOD, can convert two molecules of superoxide, produced during the oxidative stress, to hydrogen peroxide (Bocchetti and Regoli, 2006). There are three SOD isoenzymes in mammalian cells: CuZn-SOD (copper- and zinc-containing SOD, mainly cytosolic), Mn SOD (manganese-containing SOD, located in the mitochondria), and EC SOD (extracellular SOD, actually also CuZn-SOD) (Zelko et al., 2002); of these, CuZn-SOD is probably the most important anti-oxidant enzyme (Peskin, 1997). Our results showed that ferulic acid reversed diosbulbin B-decreased enzymatic activities and mRNA expressions of CAT and CuZn-SOD. The results suggest that ferulic acid can prevent diosbulbin B-induced oxidative stress injury, while CAT and CuZn-SOD may also participate in this protection.

In conclusion, the present study shows that ferulic acid can prevent hepatotoxicity induced by diosbulbin B isolated from D. bulbifera rhizome, mainly via preventing liver oxidative stress injury. This study also demonstrates that ferulic acid can enhance the anti-tumor activity of diosbulbin B in mice. Further studies are in progress in our laboratory to explore the molecular mechanisms of this reinforced anti-tumor activity.


*&nbspProject supported by the Program for New Century Excellent Talents in University (No. NCET-11-1054), the National Natural Science Foundation of China (No. 81322053), and the Program for Changjiang Scholars and Innovative Research Team in University (No. PCSIRT-IRT1071), ChinaCompliance with ethics guidelines&nbspJun-ming WANG, Yu-chen SHENG, Li-li JI, and Zheng-tao WANG declare that they have no conflict of interest.

[25] Marklund, S.L., Marklund, G., 1974. Involvement of the superoxide anion radical in the autoxidation of pyrogallol and a convenient assay for superoxide dismutase. Eur J Biochem, 47(3):469-474.