Abstract: This study observes the therapeutic detoxification of quercetin, a well-known flavonoid, against carbon tetrachloride (CCl4) induced acute liver injury in vivo and explores its mechanism. Quercetin decreased CCl4-increased serum activities of alanine and aspartate aminotransferases (ALT/AST) when orally taken 30 min after CCl4 intoxication. The results of a histological evaluation further evidenced the ability of quercetin to protect against CCl4-induced liver injury. Quercetin decreased the CCl4-increased malondialdehyde (MDA) and reduced the glutathione (GSH) amounts in the liver. It also reduced the enhanced immunohistochemical staining of the 4-hydroxynonenal (4-HNE) in the liver induced by CCl4. peroxiredoxin (Prx) 1, 2, 3, 5, 6, thioredoxin reductase 1 and 2 (trxR%29&ck%5B%5D=abstract&ck%5B%5D=keyword'>trxR1/2), thioredoxin 1 and 2 (trx1/2), nuclear factor erythroid 2-related factor 2 (Nrf2), and heme oxygenase-1 (HO-1) all play critical roles in maintaining cellular redox homeostasis. Real-time polymerase chain reaction (PCR) results demonstrated that quercetin reversed the decreased mRNA expression of all those genes induced by CCl4. In conclusion, our results demonstrate that quercetin ameliorates CCl4-induced acute liver injury in vivo via alleviating oxidative stress injuries when orally taken after CCl4 intoxication. This protection may be caused by the elevation of the antioxidant capacity induced by quercetin.

Flavonoids are widely distributed through red wine, fruits, vegetables, herbal tea and medicines. As flavonoids have various pharmacological activities, such as antioxidant, anti-inflammation, and anti-tumor, the nutritional value of flavonoids is well-known to people (Hollman and Katan, 1999; Park and Pezzuto, 2012). Some epidemiological surveys report that a negative correlation can be observed between dietary intake of flavonoids and cardiovascular disease or cancer (Muldoon and Kritchevsky, 1996; Yang et al., 2001). However, nutraceuticals, including flavonoids, may also have toxic effects depending on the dose and the redox status of the cell, which is also called as hormesis (Brambilla et al., 2008; Calabrese et al., 2010). Quercetin is a well-known flavonoid, and it is widely distributed in various Chinese medicinal herbs, such as Flos sophorae Immaturus (Kelly, 2011; Wu et al., 2012). Various reports show that quercetin has neuro-protection, anti-tumor, anti-inflammation, anti-oxidant, and anti-diabetic effects (Chirumbolo, 2010; Kelly, 2011; Dajas, 2012). Furthermore, some reports demonstrate that quercetin can ameliorate various toxin-induced liver injuries, such as ethanol and acetaminophen (Vicente-Sánchez et al., 2008; Liu et al., 2010; Yousef et al., 2010; de David et al., 2011; Domitrović et al., 2012). However, the concrete-engaged signals in regulating the protection of quercetin against liver injuries are not very clear.

Carbon tetrachloride (CCl4), a classic hepatotoxin, has been widely used in the industry. CCl4 can enter the body of humans and animals primarily through the respiratory and digestive tracts. Weber et al. (2003) reported that CCl4 could lead to a lipid peroxidation of unsaturated fatty membrane and organelle membrane after its metabolic activation by hepatic microsomal cytochrome P450, and thus lead to serious hepatocytes damage. CCl4-induced liver injury is one of the most widely used experimental models for exogenous toxins-induced hepatotoxicity (Ratziu and Zelber-Sagi, 2009; Chen et al., 2012).

Peroxiredoxins (Prxs) and thioredoxins (Trxs) are important liver antioxidant proteins and play important roles in maintaining liver redox homeostasis (Watson et al., 2004; Rhee et al., 2005). The present study is designed to observe the therapeutic detoxification of quercetin against CCl4-induced liver injury when it is orally given after CCl4 intoxication, and to further investigate the underlying mechanisms via focusing on Prxs, Trxs, and other antioxidant signals.

Specific pathogen free male ICR mice (18–22 g) were purchased from the Shanghai Laboratory Animal Center of Chinese Academy of Science (Shanghai, China). Animals were fed with a standard laboratory diet and given free access to tap water. The animal room was maintained at (22±1) °C and (65±5)% humidity, with a 12 h:12 h light-dark cycle. The animals received humane care in compliance with the institutional animal care guidelines approved by the Experimental Animal Ethical Committee of Shanghai University of Traditional Chinese Medicine, China.

Fresh blood was obtained from mice in the four groups and put at room temperature for 60 min to clot. Serum was isolated following the centrifugation at 840g for 15 min. Serum ALT and AST activities were determined by kits according to the manufacturer’s instructions.

Live slices were fixed in 10% phosphate-buffered saline (PBS)-formalin and embedded in paraffin. Liver samples were subsequently sectioned (5 μm), stained with hematoxylin and eosin (H&E), and examined under a microscope (Olympus, Japan) to evaluate liver injuries.

Liver tissues were homogenized in cold PBS. LPO was determined according to the method described by Högberg et al. (1974). MDA was formed as the product of LPO and served as an index for LPO. MDA reacts with 2-thiobarbituric acid to generate a pink-colored product, which has an absorbance at 532 nm. The MDA level was expressed as μmol/mg protein based on liver protein concentration.

The amounts of liver GSH and oxidative GSH (GSSG) were measured as described in our previous report (Liang et al., 2011).

Paraffin-embedded liver sections (5 μm) were first deparaffinized in xylene, and then rehydrated in a gradient of ethanol to distilled water. After quenching the endogenous peroxidase activity using 3% hydrogen peroxide, liver sections were further incubated with 5% bovine serum albumin to alleviate nonspecific binding, and then incubated with 4-HNE antibody at 4 °C overnight. The antigen-antibody reactions were detected using DAKO EnVision™ detection kits. All sections were counterstained with hematoxylin. Pictures were taken with a microscope (Nikon, Japan). Liver expression of 4-HNE was determined by image information object definition (IOD) values analyzed by Image-Pro Plus 6.0 (Media Cybernetics, USA).

The total liver RNA was extracted by Trizol reagent as described by the manufacturer’s protocol. Complementary DNA (cDNA) was synthesized according to the instruction of the PrimeScript RT master mix kits. Real-time PCR was performed with STEPONE Plus (Carlsbad, CA) by a SYBR green premix according to the manufacturer’s guide. Relative expressions of target genes were standardized to β-actin, evaluated by the 2−ΔΔCT method and given as a ratio to control the experiments. The primer sequences used in this study are shown in Table 1.

Serum activities of ALT and AST were increased in the CCl4 group compared with the control group (P<0.001; Fig. 1). After treatment with quercetin (80 mg/kg), CCl4-increased ALT and AST activities were decreased (P<0.05 and P<0.01, respectively). Quercetin (20 mg/kg) had no effect on CCl4-increased serum ALT or AST activity. In contrast to the control group, the mice in the CCl4 group showed serious liver damage, indicated by obvious hepatocyte necrosis and shrinkage nuclei (Fig. 2b). After treatment with quercetin (20 and 80 mg/kg), these abnormal changes were all alleviated (Figs. 2c and 2d).

In addition, our results showed that the number of 4-HNE-stained hepatocytes increased in the CCl4-treated mice (Fig. 4b). Quercetin (20 or 80 mg/kg) reduced the CCl4-increased 4-HNE-stained cells (Figs. 4c and 4d). The statistical result in Fig. 4e showed that CCl4 enhanced the density of the immunohistochemical staining of 4-HNE (P<0.001), while quercetin (20 and 80 mg/kg) decreased this increase induced by CCl4 (P<0.001 and P<0.05, respectively). 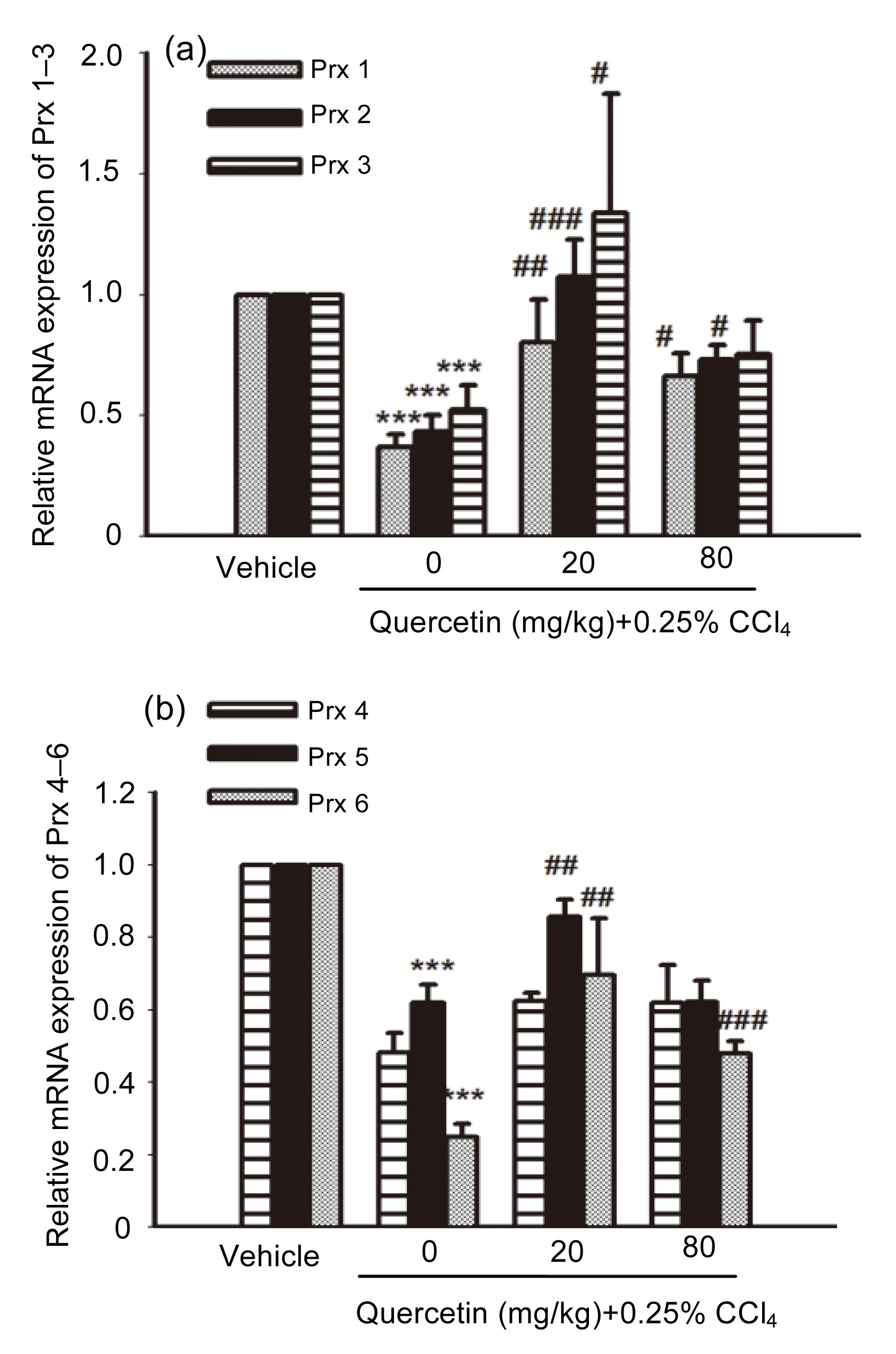 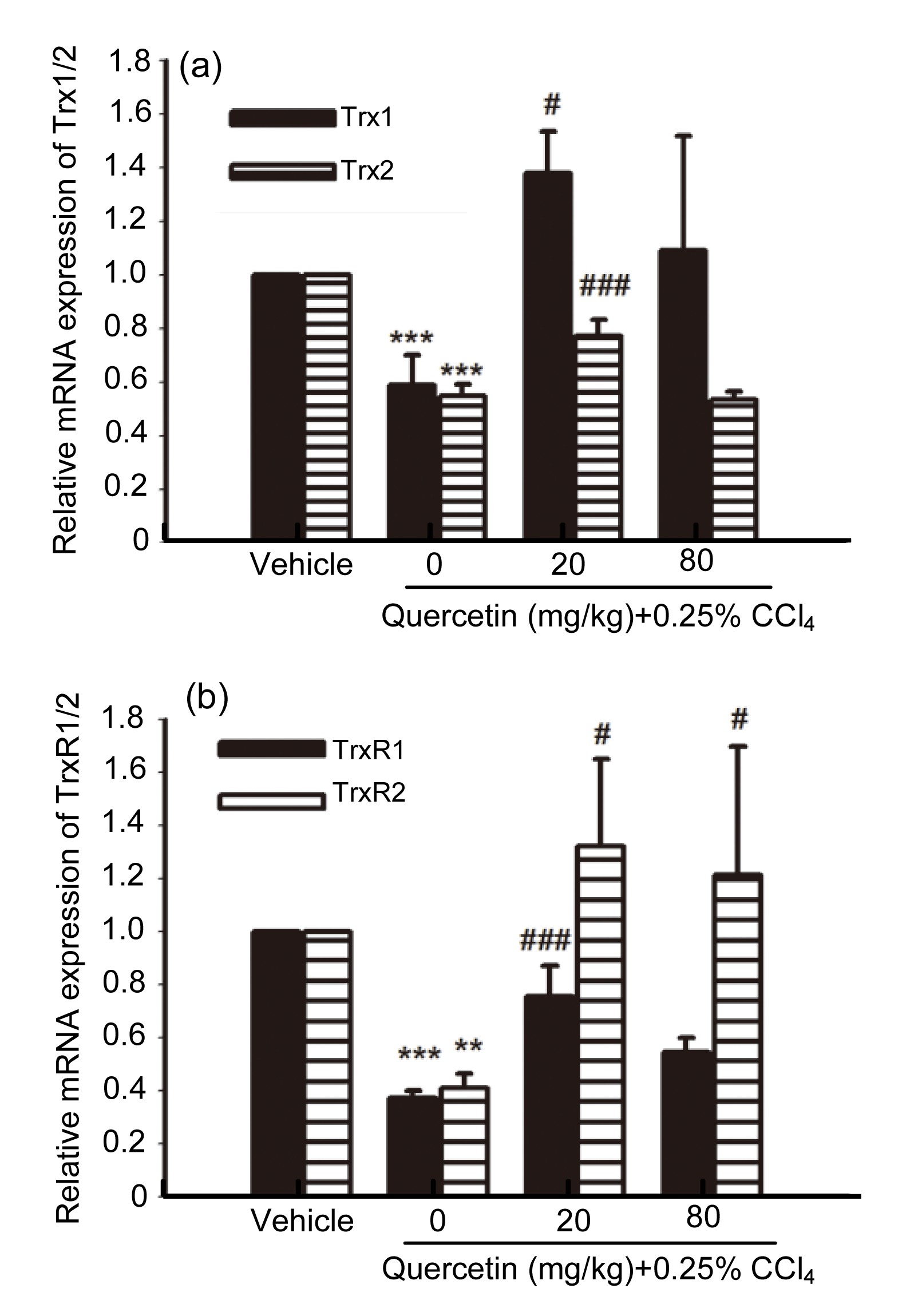 3.5.  Effects of quercetin on the mRNA expression of HO-1 and nuclear factor erythroid 2-related factor 2 (Nrf2) 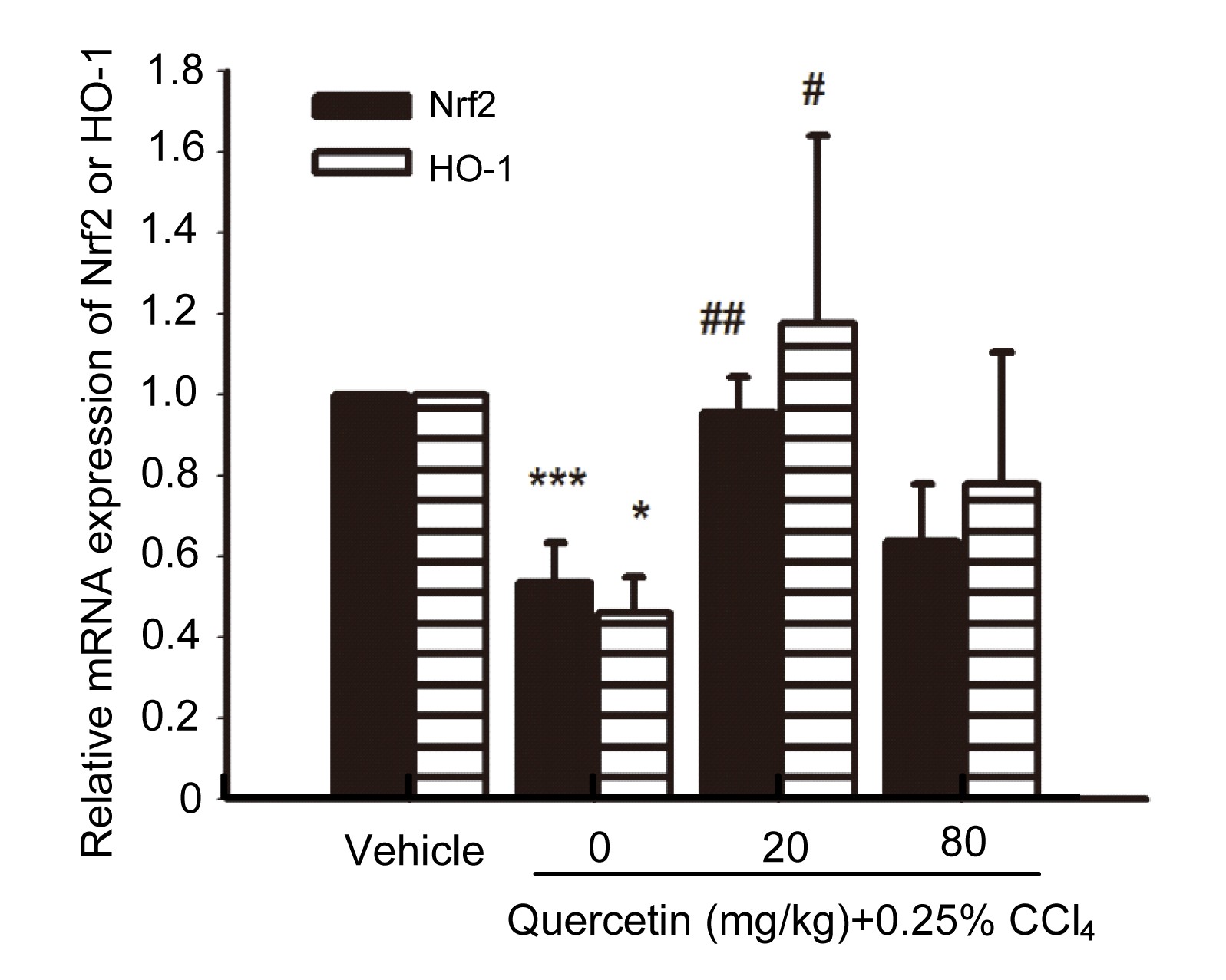 Generally, oxidative stress liver injuries are the main reason for CCl4-induced hepatotoxicity. 4-HNE and MDA are both the end-products of LPO (Högberg et al., 1974; Vatsyayan et al., 2011). Our results of liver MDA level and immunohistochemical staining of 4-HNE show that quercetin can decrease CCl4-induced LPO, which indicates that quercetin can ameliorate CCl4-induced liver oxidative injuries. GSH is the key antioxidant in liver, and its homeostasis is associated with various toxin-induced liver injuries (Kretzschmar and Klinger, 1990; Han et al., 2006). Further results show that CCl4 increased the cellular GSH level, which may contribute to the elevation of the body’s defensive capacity to protect CCl4-induced oxidative stress injuries. After treatment with quercetin, the increased liver GSH level was reduced, which suggests that oxidative stress injuries were ameliorated. There are already existing reports that state that quercetin has a free radical scavenging activity (Pascoal et al., 2011; di Meo et al., 2013), so we can speculate that quercetin itself may have the capacity to scavenge free radicals, and thus substitute for the function of GSH, which leads to a decrease of GSH levels in quercetin-treated mice.

The Prx family contains Prx 1–6, which are all antioxidant enzymes and have the capacity of scavenging free radicals in cells (Rhee et al., 2005). Previous reports have demonstrated the changed expression of the Prx family in exogenous toxin-induced liver injuries such as alcoholic liver injury and pyrazole-induced liver injury (Cohen et al., 2011; Bae et al., 2012). In addition, Hong et al. (2011) reported that an alkaline water named ENA actimineral resource A (ENA-A) could prevent CCl4-induced liver injury, and Prx1 is an increased component in the ENA-A group. Our results showed that the expressions of Prx 1–6 mRNAs in the CCl4-treated group all decreased when compared with the vehicle group. Except Prx 4, the mRNA expressions of all the other members of the Prx family increased in quercetin-treated mice. Our study suggests that quercetin can ameliorate liver oxidative injuries via elevating the expressions of Prx 1, 2, 3, 5, 6.

Trxs, including Trx1 and Trx2, are cellular important antioxidant proteins (Watson et al., 2004). Trx1/2 and Trx reductase 1/2 (TrxR1/2) constitute the Trx system, which plays a partially overlapping and highly complementary role to the GSH antioxidant system, and contributes to the maintenance of the cellular reducing environment (Williams et al., 2000). Our results show that the mRNA expressions of Trx1/2 and TrxR1/2 decreased in the CCl4-treated mice, but this decrease was reversed in the quercetin-treated mice. These results suggest that quercetin can ameliorate liver oxidative injuries via elevating the expression of the Trx system.

HO-1 is the inducible isoform of heme oxygenase, and it is reported to protect acute liver injuries (Sass et al., 2012). Our results showed that the mRNA expression of HO-1 decreased in the CCl4-treated mice, but this decrease was reversed in the quercetin-treated mice. This result suggests that the increased HO-1 expression may contribute to the alleviation of quercetion against CCl4-induced liver injury. It is well-known that HO-1/biliverdin reductase axis catalyzes the degradation of heme, and it can also reduce biliverdin to bilirubin, which is a free radical scavenger and exerts cytoprotective effects (Barone et al., 2009; Mancuso and Barone, 2009; Mancuso et al., 2012). Whether quercetin will affect the amounts of liver bilirubin needs further investigation.

In conclusion, the present study demonstrates the therapeutic detoxification of quercetin against CCl4-induced acute liver injury in vivo. Our results show that quercetin can ameliorate CCl4-induced liver injury through inhibiting oxidative stress injury via elevating the expressions of the antioxidant transcription factor Nrf2 and some antioxidant enzymes, such as HO-1, Prx 1–3, Prx 5–6, Trx1/2, and TrxR1/2.


*&nbspProject supported by the “Shu Guang” Project from Shanghai Municipal Education Commission and Shanghai Education Development Foundation (No. 13SG43), the National Natural Science Foundation of China (No. 81322053), and the Program for New Century Excellent Talents in University (No. NCET-11-1054), ChinaCompliance with ethics guidelines&nbspJia-qi ZHANG, Liang SHI, Xi-ning XU, Si-chong HUANG, Bin LU, Li-li JI, and Zheng-tao WANG declare that they have no conflict of interest.

[3] Brambilla, D., Mancuso, C., Scuderi, M.R., 2008. The role of antioxidant supplement in immune system, neoplastic, and neurodegenerative disorders: a point of view for an assessment of the risk/benefit profile. Nutr J, 7(1):29