Abstract: Willows (Salix spp.) have shown high potential for the phytoextraction of heavy metals. This study compares variations in copper (Cu) and zinc (Zn) tolerance and accumulation potential among 12 willow clones grown in a nutrient solution treated with 50 μmol/L of Cu or Zn, respectively. The results showed differences in the tolerance and accumulation of Cu and Zn with respect to different species/clones. The biomass variation among clones in response to Cu or Zn exposure ranged from the stimulation of growth to inhibition, and all of the clones tested showed higher tolerance to Cu than to Zn. The clones exhibited less variation in Cu accumulation but larger variation in Zn accumulation. Based on translocation factors, it was found that most of the Cu was retained in the roots and that Zn was more mobile than Cu for all clones. It is concluded that most willow clones are good accumulators of Zn and Cu.

Phytoremediation is the process of using trees, shrubs, and grasses to de-contaminate soil and water, and is considered to be a promising, cost-effective solution to heavy-metal pollution (Licht and Isebrands, 2005; Vangronsveld et al., 2009; Xing et al., 2012; Lu et al., 2013). Generally, phytoremediation and especially phytoextraction rely on plants known as hyperaccumulators; however, these are species that often have a low biomass and slow growth rate, leading to a long time periods required for metal removal (Tanhan et al., 2007). Recently, willows have been shown to be good candidates for remediating metal-contaminated sites because of their rapid growth, large biomass, deep roots, and high accumulation capacity for heavy metals (Kuzovkina and Quigley, 2005; Kuzovkina and Volk, 2009). In the last decade, short-rotation willow coppices have provided an economic and practical solution for remediation as well as for bioenergy production (Rockwood et al., 2004; Mirck et al., 2005).

Apart from genetic modifications, increasing the metal bioaccumulation capacity of a plant is primarily accomplished through the artificial selection of Salix clones; the selection of appropriate species or clones is crucial for achieving successful phytoremediation (Zalesny et al., 2007; Zalesny and Bauer, 2007a; 2007b). Numerous studies have revealed a remarkable genotypic variability of the genus Salix in its ability to tolerate/accumulate heavy metals (Wang and Greger, 2004; Dos Santos Utmazian et al., 2007; Purdy and Smart, 2008; Zhivotovsky et al., 2010). Most results of willow screening have shown that the tolerance and uptake of heavy metals depend strongly on species and clones (Punshon et al., 1995; Dos Santos Utmazian et al., 2007; Zacchini et al., 2009; Zhivotovsky et al., 2010). Salix comprises about 450 species as well as a large number of willow clones produced through breeding projects worldwide, which together provide a large number of plants to be screened for phytoremediation (Kuzovkina et al., 2004; Kuzovkina and Quigley, 2005). Owing to the high genetic variability in Salix, the use of clone selection has been proposed to find those best suited for phytoremediation purposes (Zalesny et al., 2007; Zalesny and Bauer, 2007b).

In previous studies, the willows investigated were limited to European and North American species. Salix has a high genetic diversity worldwide, and China has a rich willow resource with 275 native species that have not yet been explored or utilized (Karp et al., 2011). In this study, the willow clones tested belong to Asian species, and they are commonly planted in China for biomass production on account of high biomass productivity and fast growth rates. In order to overcome the drawbacks of hydroponic screening, we selected relatively large seedlings and used prolonged exposure time to Cu and Zn to evaluate their uptake and accumulation potential in 12 willow clones.

The 12 willow clones (Table 1) used in this study were obtained from the Jiangsu Academy of Forestry, Nanjing (33°31′ N, 118°47′ E), China. They were maintained in a nursery in the Experimental Station of Agriculture of Zhejiang University, Hangzhou (30°16′ N, 120°12′ E), China. One-year-old hardwood stems from each clone were collected from the nursery and prepared in uniformly sized 10-cm long cuttings, which were mounted with styrofoam in plastic buckets containing a nutrient solution. Plants were pre-grown in the nutrient solution for 42 d. The composition of the nutrient solution was as follows: 1 mmol/L Ca(NO3)2, 1.25 mmol/L KNO3, 0.5 mmol/L MgSO4, 0.5 mmol/L NH4H2PO4, and the micronutrients including 25 μmol/L FeEDTA, 23.1 μmol/L H3BO3, 0.4 μmol/L ZnCl2, 0.18 μmol/L CuCl2, 4.57 μmol/L MnCl2, and 0.06 μmol/L Na2MoO4, as described by Watson et al. (2003). When the cuttings were well developed, they were used to evaluate metal tolerance and accumulation potential. In this study, according to our preliminary investigation on metal exposure concentrations, treatments containing 50 μmol/L Cu or 50 μmol/L Zn (added as CuSO4 or ZnSO4) were performed. The controls were maintained in the above nutrient solution.

Salix clones tested
All treatments were performed in triplicate, and each treatment had three seedlings. The pH of the nutrient solution was maintained at 5.5–6.0 using H2SO4/NaOH. Solutions were aerated using a pump throughout the experiment and replaced weekly. The experiment was a randomized complete block design, and all plastic buckets were randomly arranged inside a greenhouse. The greenhouse conditions were 30/18 °C day/night temperature and a relative humidity of 70%–80%.

Cu and Zn exposure lasted for 50 d. After this time, all plants were harvested and separated into leaves, stems, and roots. The roots were rinsed carefully in 10 mmol/L ethylenediaminetetraacetic acid (EDTA)-Na2 for 15 min to remove the adsorbed metals from root surfaces, and then washed in double-deionized water. Plant materials were dried at 70 °C for 48 h in a forced-air oven, and the dry weights (DWs) were recorded. The dried material was ground to a fine powder in a mill (Retsch 2M 200, Germany), and approximately 0.2 g of the plant sample was digested using a HNO3:HClO4 solution (4:1, v/v) in a Hot Block (ED36, LabTech, Germany). Cu and Zn concentrations in the extracts were measured using atomic absorption spectrometry (Analyst 800, PerkinElmer Inc., USA). Chemical analyses were validated by blanks and reference materials.

The main purpose of the experiments was to examine clonal differences under Cu or Zn exposure. To analyze the differences in the treatments and clones simultaneously, treatment and clone effects were determined by two-way analyses of variance (ANOVA) followed by Tukey-HSD test (P<0.05). All statistics were performed using SPSS software (Version 16.0, SPSS Inc., Chicago, USA).

Biomass accumulation and the relative growth of shoots and roots are important parameters for characterizing metal tolerance. 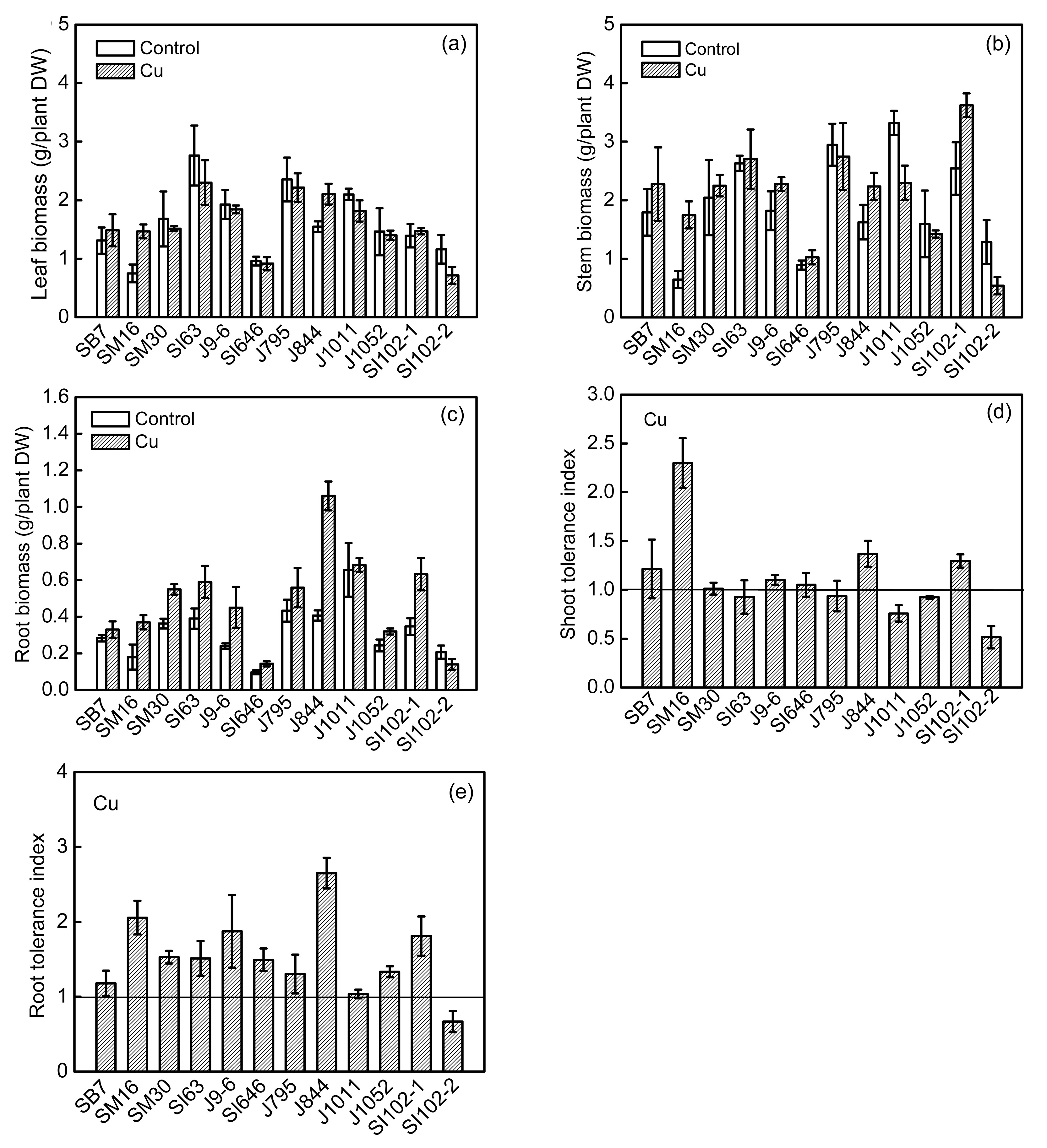 Fig.1
Dry biomasses of leaves (a), stems (b) and roots (c), and tolerance indexes of shoots (d) and roots (e) of 12 willow clones with 50 μmol/L Cu treatment in hydroponic culture for 50 d
Tolerance indexes were estimated as metal-treated shoot or root dry weight over untreated one. The values represented mean±standard error (SE), with n=3
TIs were expressed as the relative weights of shoots and roots. The Cu TIs based on shoot biomass ranged from 0.51 to 2.29, and seven out of twelve clones showed high tolerance to Cu (TI>1), while clones J1011 and SI102 were more sensitive to Cu (Fig. 1d). The Cu TIs based on root biomass ranged from 0.66 to 2.05 among clones, and root TIs of eleven clones were >1 (Fig. 1e).

The growth response of the clones to excess Zn is also presented in Fig. 2. The foliar biomass accumulation of most clones decreased in response to excess Zn. In contrast, Zn treatment had little inhibitory effect on the leaf biomasses of clones SM16 and J844. However, Zn treatment increased the leaf biomasses of clones SB7 and SI63 compared with the control (Fig. 2a). Exposure to excess Zn reduced the stem biomasses of six clones, and clone SI102-1 showed the largest reduction (56%) compared with the control. In contrast, the stem biomass accumulation of clone SI63, J844, or J1052 was not affected by Zn excess, and Zn exposure significantly increased the stem biomasses of clones SB7 and SM30 compared with the control (Fig. 2b). Excess Zn strongly inhibited the root biomass productions of seven clones; clones SM16, SI646, J844, and J1052 were not affected. However, clone SB7 had a larger root biomass than the control plants (Fig. 2c). 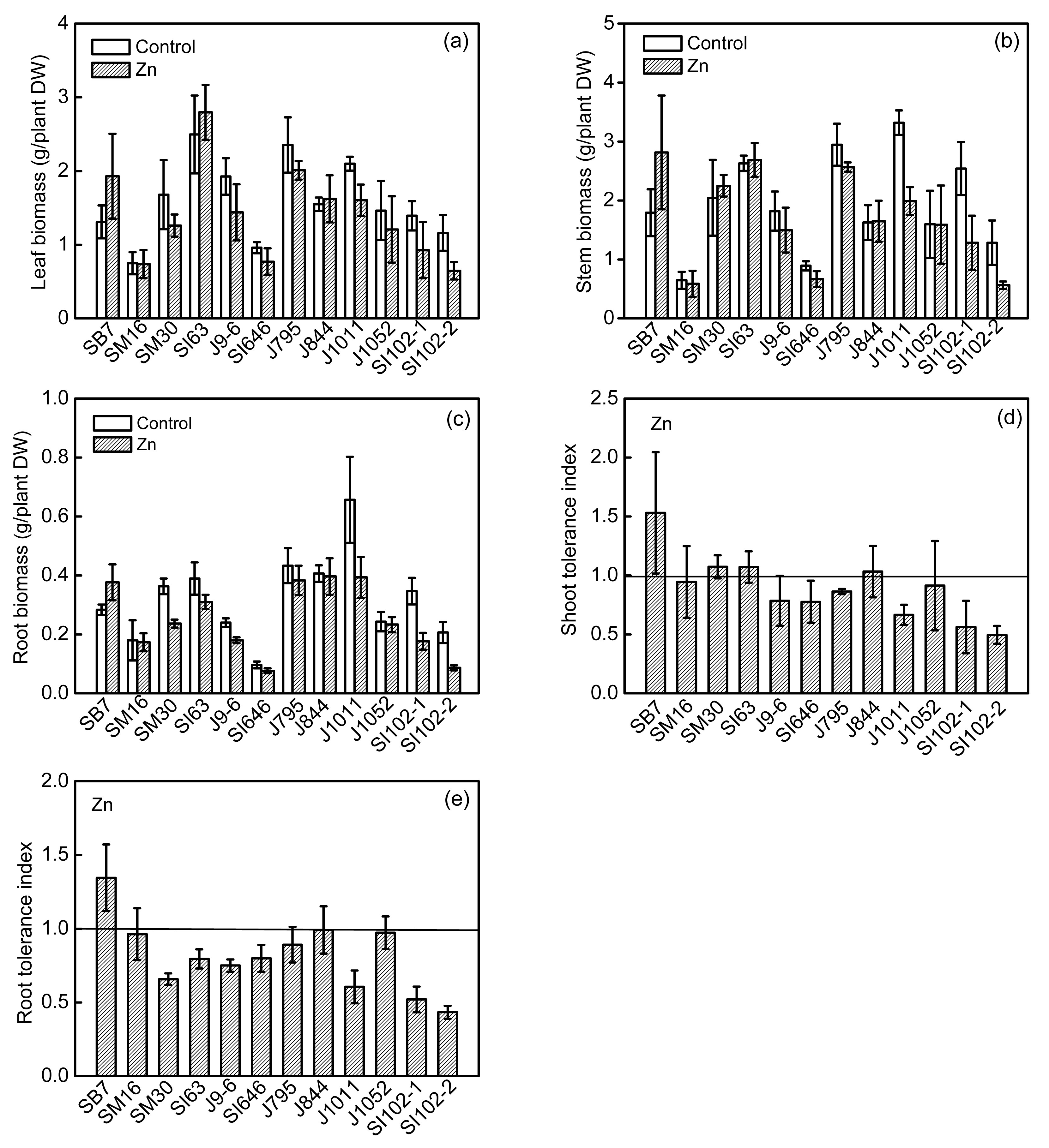 Fig.2
Dry biomasses of leaves (a), stems (b) and roots (c), and tolerance indexes of shoots (d) and roots (e) of 12 willow clones with 50 μmol/L Zn treatment in hydroponic culture for 50 d
Tolerance indexes were estimated as metal-treated shoot or root dry weight over untreated one. The values represented mean±standard error (SE), with n=3
The TIs to Zn treatment were calculated as for Cu. The Zn TIs based on shoot biomass ranged from 0.57 to 1.67 (Fig. 2d), and the root-based TIs ranged from 0.43 to 1.32 among clones (Fig. 2e). Considering both shoot- and root-based TIs (Figs. 2d and 2e), clones SB7 and J844 showed high tolerances to Zn (TIs>1), and seven clones showed medium tolerances (0.7