Abstract: salecan is a novel exopolysaccharide produced by the strain Agrobacterium sp. ZX09, and it is composed of only glucose monomers. The unique chemical composition and excellent physicochemical properties make salecan a promising material for applications in coagulation, lubrication, protection against acute liver injury, and alleviating constipation. In this study, we cloned the Vitreoscilla hemoglobin gene into a broad-host-range plasmid pCM158. Without antibiotic selection, there was negligible loss of the plasmid in the host Agrobacterium sp. ZX09 after one passage of cultivation. The expression of Vitreoscilla hemoglobin was demonstrated by carbon monoxide (CO) difference spectrum. The engineered strain Agrobacterium sp. ZX09 increased salecan yield by 30%. The other physiological changes included its elevated respiration rate and cellular invertase activity.

Among the polysaccharides produced by bacteria, β-glucans consisting of a backbone of β-1,3-D-glucose units with various lengths of β-1,6 side chains have the notable physiological effect of immunological activation (Miura et al., 1996). Immunologists have found the β-glucan receptors, dectin-1 and complement receptor 3, on the surface of innate immune cells (Brown and Gordon, 2001; Vetvicka et al., 2007). There are many application studies associated with β-glucan immune activation, e.g., tumoricidal activity, prevention of infection, and damage reduction of radiation exposure (Thompson et al., 2010). β-Glucans are also found to decrease the levels of serum cholesterol and liver low-density lipoproteins, leading to lowering of atherosclerosis and cardiovascular disease hazards (Barsanti et al., 2011). Salecan, produced by the strain Agrobacterium sp. ZX09, is a novel water-soluble β-glucan-like polysaccharide. It consists of the following repeating units: →3)-β--Glcp-(1→3)-[β--Glcp-(1→3)-β--Glcp-(1→3)]3-α--Glcp-(1→3)-α--Glcp-(1→ (Xiu et al., 2010). This special structure of Salecan is water-soluble and has potential biological activities owing to its β-1,3-glucosides. It reduces the acute hepatic injury in mice induced by alcohol (Chen et al., 2011) and carbon tetrachloride (Chen et al., 2012). It has a potential to become a hydrophilic laxative to cure constipation (Zhou et al., 2013). It can also possibly be used in the food industry as a thickening agent due to its excellent rheological properties (Xiu et al., 2011). Therefore, increasing the yield of Salecan has a vital significance for its industrial application.

It is well known in fermentation by aerobic organisms that the supply of O2 usually becomes a serious limitation because of its low solubility, especially during high-cell-density fermentation or when fermentation media are highly viscous. Vitreoscilla, an obligate aerobic bacterium (Pringsheim, 1951), survives and grows in an O2-poor environment owing to its synthesis of hemoglobin (VHb). VHb binds O2 at low extracellular concentrations and delivers it to the terminal respiratory oxidase, thus enhancing respiration (Park et al., 2002). The vgb gene from Vitreoscilla has been successfully engineered into various organisms to improve cell density, protein synthesis, and metabolic productivity (Khosla and Bailey, 1988; Frey and Kallio, 2006; Su et al., 2010; Frey et al., 2011). The vgb gene is generally integrated into the genome of the host organisms to form stable inheritance, but this technique is usually limited to the genome-sequenced organisms.

In this study, a broad-host-range vector pCM158 (Marx and Lidstrom, 2002), hosting vgb gene, was demonstrated to persist in Salecan-producing Agrobacterium sp. ZX09 without antibiotic selection pressure and to improve the respiration rate, invertase activity, and Salecan production.

2.2.  Construction of pCM158-vgb plasmid and transformation

The VHb coding gene vgb was first cloned from the plasmid pUC19-vgb (Khosla and Bailey, 1988) by polymerase chain reaction (PCR) with the two primers of vgb-F (AAGCTTACAGGACGCTGGGGT) and vgb-R (CAATATTTGTCCCAAGTTT). The PCR products were then cloned into pMD18-T vector to form pMD18-T-vgb, and sequenced to be correct without mutations. Last, the vgb gene fragment was cut down from the pMD18-T-vgb by restriction endonucleases SphI and EcoRI, and cloned into the corresponding sites of pCM158 plasmid to form pCM158-vgb. Electrocompetent cells were prepared in super optimal broth (SOB) medium. Once the optical density at 600 nm (OD600) of the culture reached about 0.5 to 0.6, the cells were placed on ice and washed three times with ice-cold 10% glycerol. About 100 ng of pCM158-vgb and pCM158 DNA were added to 100 μl of the competent cells and the resulting mixtures were electroporated in 0.1-cm-gap cuvettes at 2.0 kV, 25 μF, 200 Ω in a Gene Pulser electroporation apparatus (BioRad). Cells were resuspended in 1 ml SOB medium. The cells were allowed to recover at 30 °C for 2 h, and then plated on Htm agar plates with 50 μg/ml kanamycin. Strains of Agrobacterium sp. ZX09 hosting the plasmids of pCM158-vgb and pCM158 were respectively designated VHb+ and VHb−. Plasmid stability was studied by inoculation of the strain into Htm medium without antibiotics and incubating at 28 °C with shaking (Guo et al., 2010). After 48 h of cultivation, the same amounts of cells were sprayed onto six solid medium plates: half of the plates lacked antibiotics and half contained antibiotics. Plasmid stability was indicated by the ratio of the colony-forming units (CFUs) formed on the plates with antibiotics to the ones formed on the plates without antibiotics.

The vgb gene expression was determined by carbon monoxide (CO) difference spectra of VHb (Liu and Webster, 1974). Cells of VHb+ and VHb− were harvested from 100 ml Htm medium after cultivation, then washed with potassium phosphate buffer (KH2PO4 5.44 g/L, Na2HPO4·12H2O 43 g/L; pH 7.2), disrupted by grinding in liquid nitrogen, and resuspended in 5 ml of potassium phosphate buffer. The cell debris was separated by centrifugation at 15 000×g for 5 min. The liquid samples were exposed to CO for 10 min and then used for CO-difference spectral analysis by PowerWave HT Microplate Spectrophotometer (BioTek Instruments, Inc.).

The viscosity of Salecan was determined by a NDJ-1 rotational viscometer (Shanghai Changji Instruments Co., Ltd., China) to indicate the relative yield of the sugar. The productivity of exopolysaccharide was expressed in terms of the weight after ethanol precipitation, collected by centrifugation, and dried under reduced pressure (Xiu et al., 2010).

The respiratory rate was determined by inoculating 1 ml of the seed medium into a 1-L flask bottle containing 250 ml Htm medium. The bottle was sealed by a cap, and incubated at 30 °C on a rotary shaker at 150 r/min. The decrease in dissolved O2 was recorded online by an optical O2 sensor VisiFerm DO Arc 120 (Hamilton Company) inserting through the cap.

Invertase activities were measured by DNS colorimetry (Miller, 1959). Cells of VHb+ and VHb− were separated from 100 ml culture broth by centrifugation, grinded in liquid nitrogen, and resuspended with 2 ml sodium phosphate buffer (0.2 mol/L NaH2PO4 93.5 ml, 0.2 mol/L Na2HPO4 6.5 ml; pH 5.7). A 500-μl sample of the cell suspension was mixed with 500 μl of 0.1 g/ml sucrose solution. After 10 min, the hydrolysis was stopped by immersion of the reaction mixture in a boiling water bath for 5 min. Glucose generated from sucrose hydrolysis by invertase was measured by DNS colorimetry. Invertase activities were expressed as milligrams of glucose per minute per milligram of protein (mg/(min∙mg)).

3.1.  Maintenance of pCM158-vgb and its expression in Agrobacterium sp. ZX09 without antibiotic selection

The vgb gene was cloned into the broad-host-range plasmid pCM158 to form pCM158-vgb (Fig. 1), and then pCM158-vgb was successfully introduced into Agrobacterium sp. ZX09 by electroporation. The plasmid persisted well in Agrobacterium sp. ZX09. Under no antibiotic selection, there was a negligible loss of the plasmid for one passage of two days cultivation (Fig. 2), but after five passages of cultivation the loss of the plasmid was apparent. Plasmid loss is not easy as commonly thought. Velappan et al. (2007) have shown that even some incompatible plasmids could persist together in host for several passages without antibiotic selection. Persistence of plasmids in host without antibiotic selection was crucial for their practical usage in fermentation; the use of antibiotics would dramatically increase the cost of fermentation, and the waste containing the antibiotics discharged into the environment would pose serious health problems. Foreign genes were usually integrated into the genome of the host for stable propagation. However, it needs double crossover and clear genetic background of the host. The process is time-consuming, especially for non-model organisms. Another shortcoming is that the genomic-integrated foreign gene is single-copied, thus limiting the gene product. On the contrary, plasmids can overcome these shortcomings. They are multi-copied and easy to handle without the genetic background of the host. In this experiment, we showed that the broad-host-range plasmid pCM158 can persist well in Agrobacterium sp. ZX09 without antibiotic selection at the end of cultivation and should have practical usage for the increase of product yield. 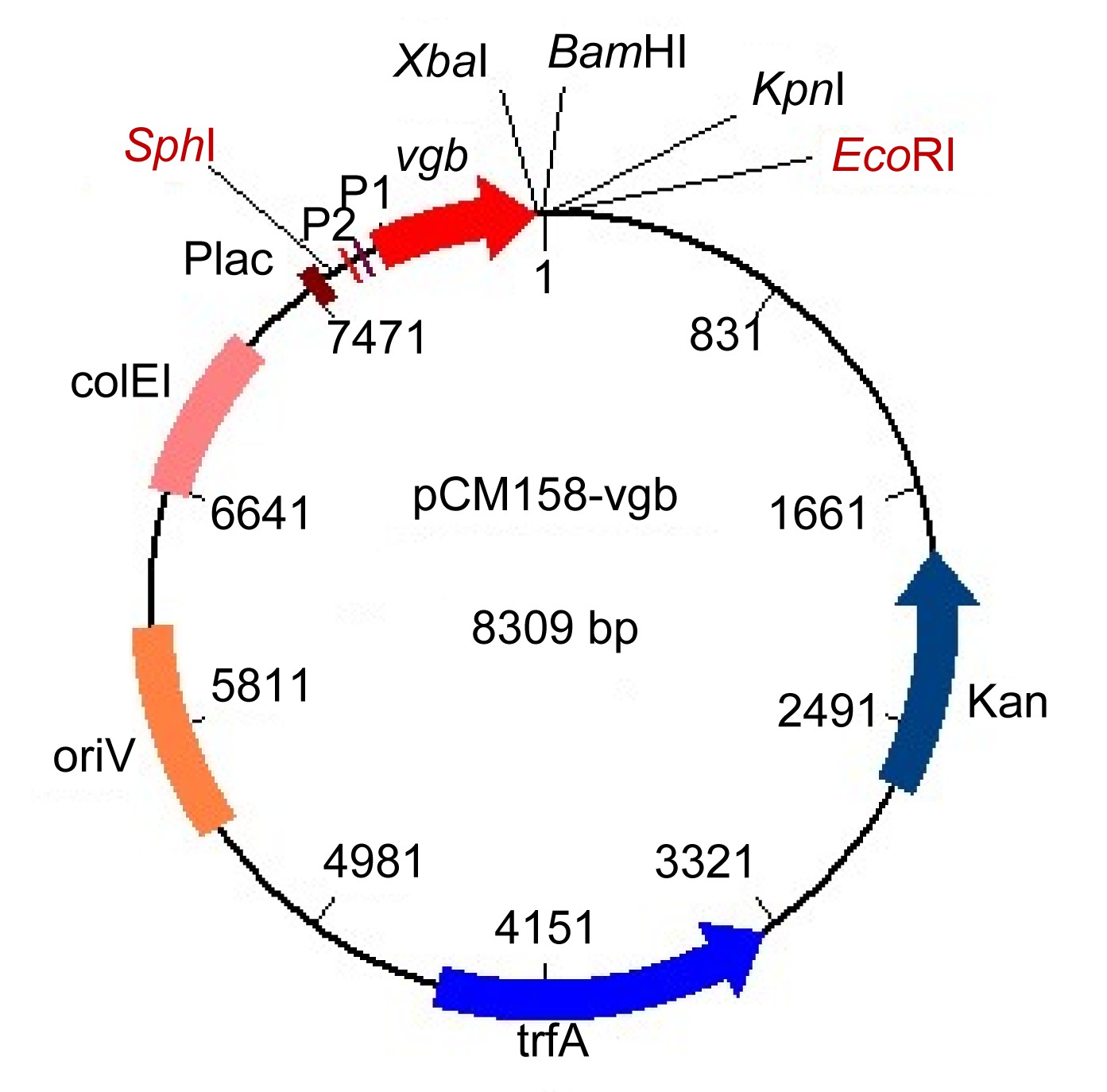 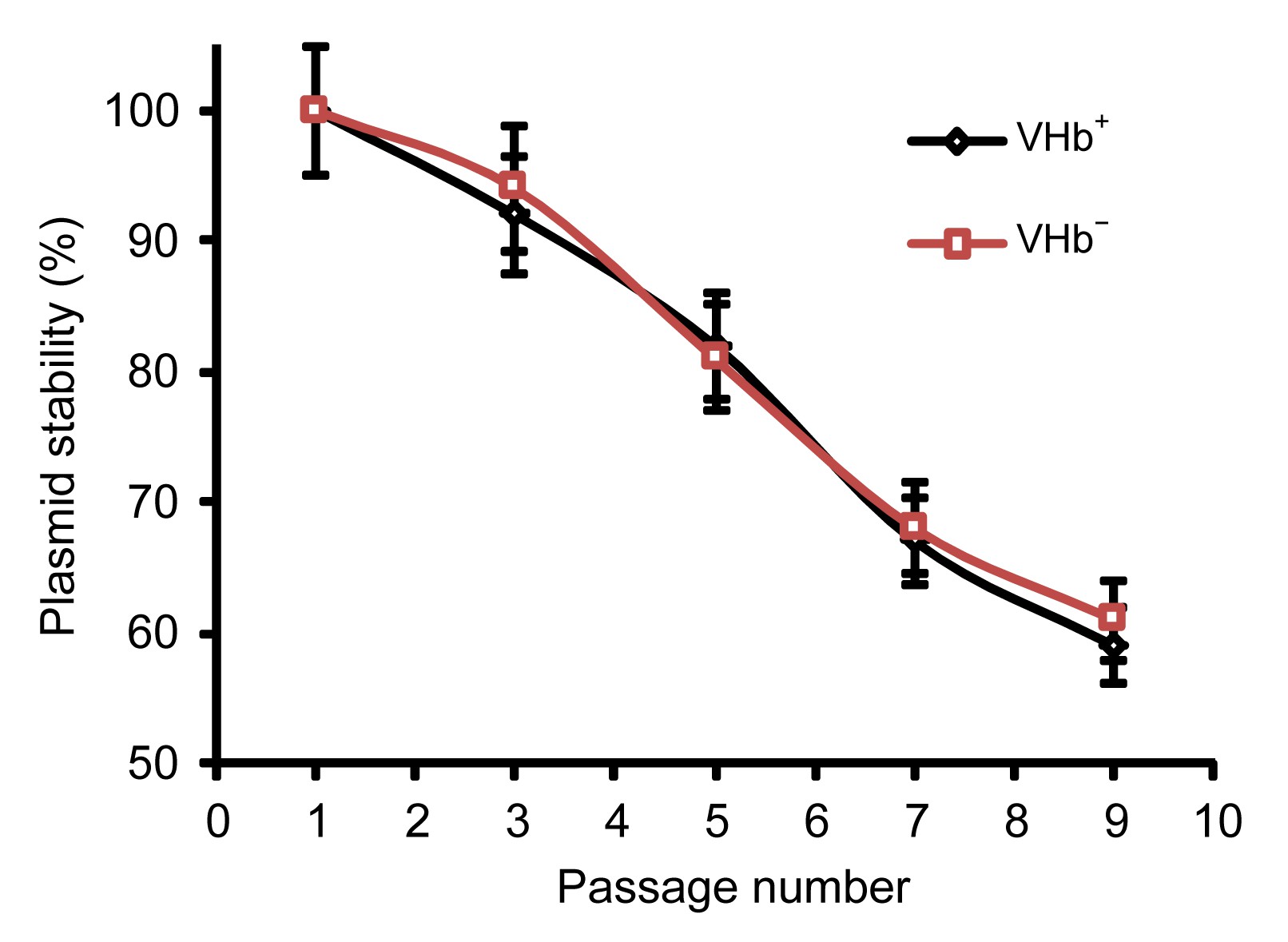 Fig.2
pCM158 and pCM158-vgb maintenance in Agrobacterium sp. ZX09 without antibiotic selection
One passage was defined as 48-h cultivation in Htm medium without antibiotics. Plasmid stability was indicated by the ratio of the CFUs formed on the plates with antibiotics to those formed on the plates without antibiotics. Results were averages (±standard deviation) of triplicate experiments
The expression of VHb was demonstrated by CO-difference spectrum owing to its binding to CO. The absorbance spectrum of the solution is subtracted from the spectrum after saturation with CO. Bubbling CO shifted the absorption maxima to 419 nm, which are characteristic of the VHb-CO complex. There was an absorption peak at 419 nm in Agrobacterium sp. ZX09 hosting pCM158-vgb (VHb+), but it was absent in the strain hosting the empty vector pCM158 (VHb−) after bubbling CO (Fig. 3). Cells of VHb+ and VHb− were collected for analysis after 2-d culturing in Htm medium without adding antibiotics. These results showed that VHb was stably expressed and further indicated that the plasmid could persist in Agrobacterium sp. ZX09 without antibiotic selection. 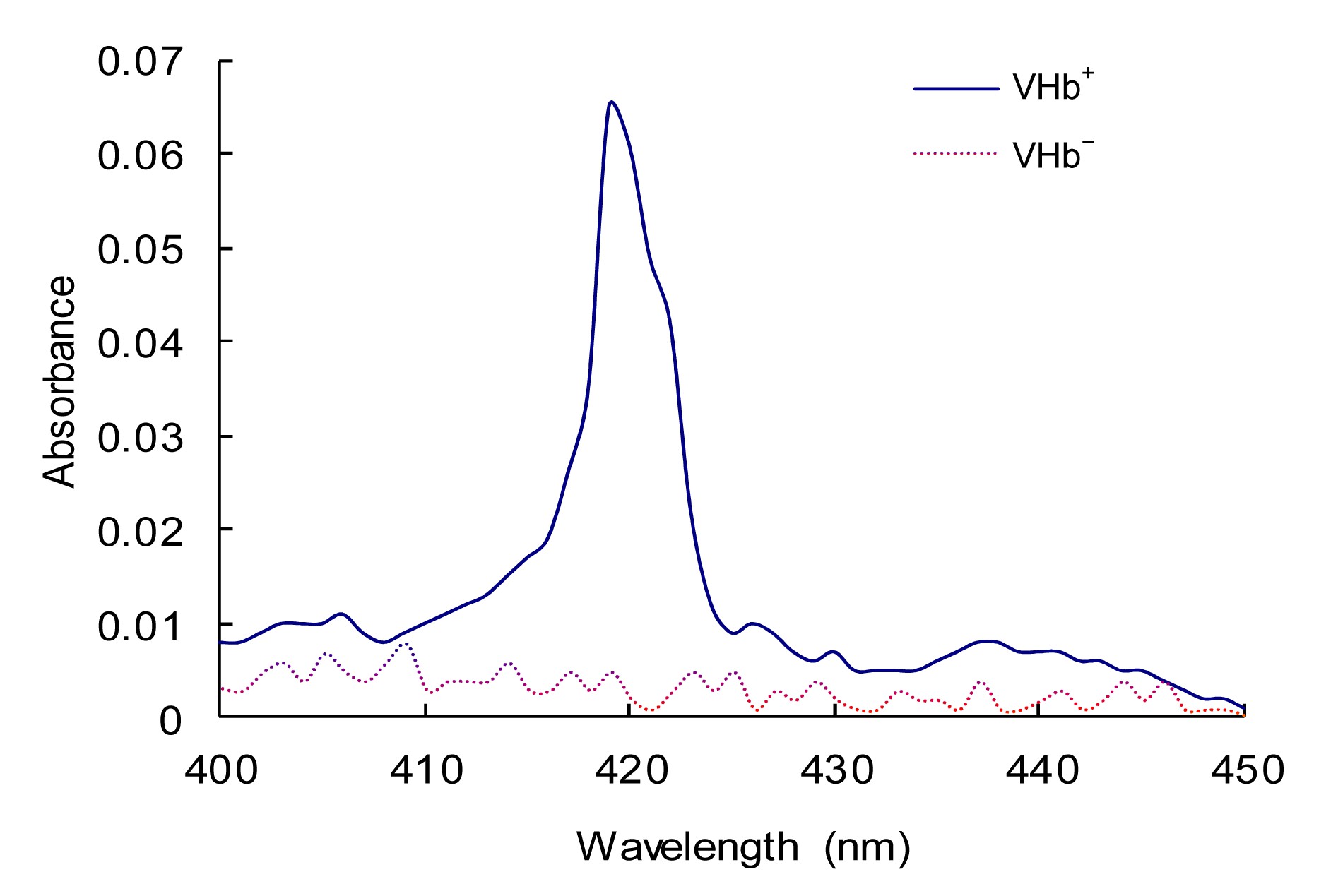 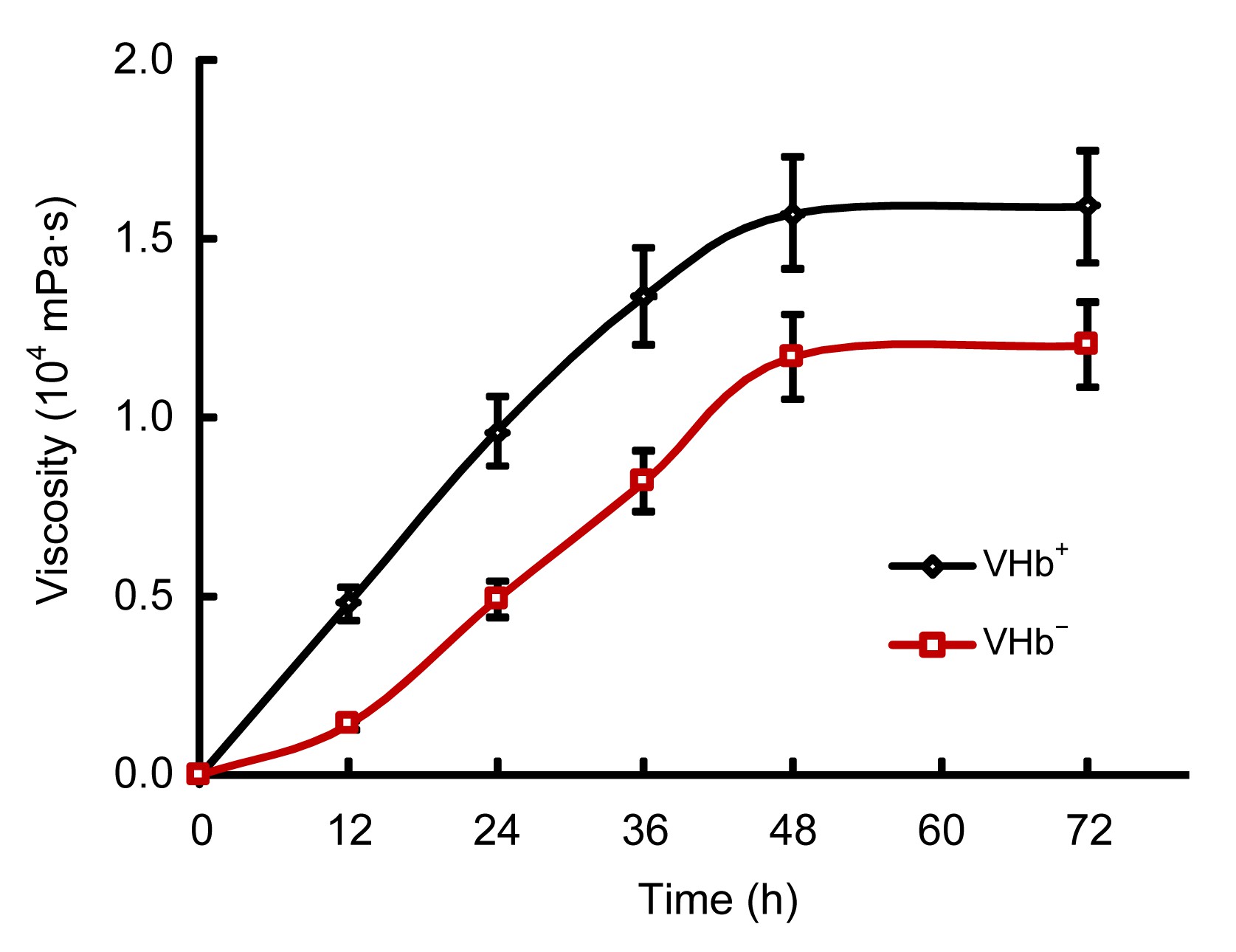 Fig.4
Viscosity yields of VHb+ and VHb−
The two strains were monitored at 12 h intervals for 72 h on a rotary shaker at 250 r/min. Results were averages (±standard deviation) of triplicate experiments 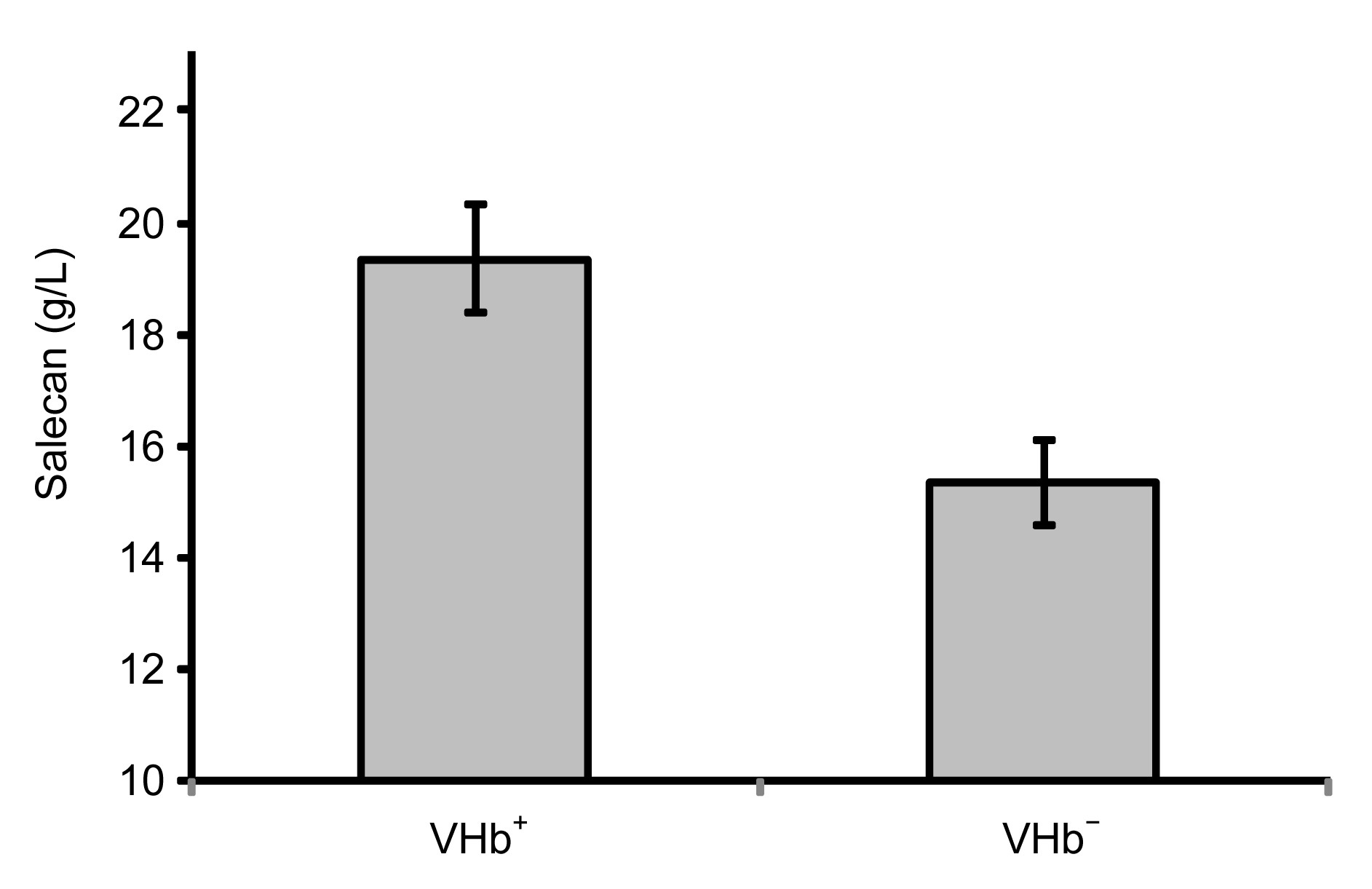 Fig.5
Exopolysaccharide productivities of VHb+ and VHb−
The fermentation was performed on a rotary shaker at 250 r/min for 48 h. Results are averages (±standard deviation) of triplicate experiments 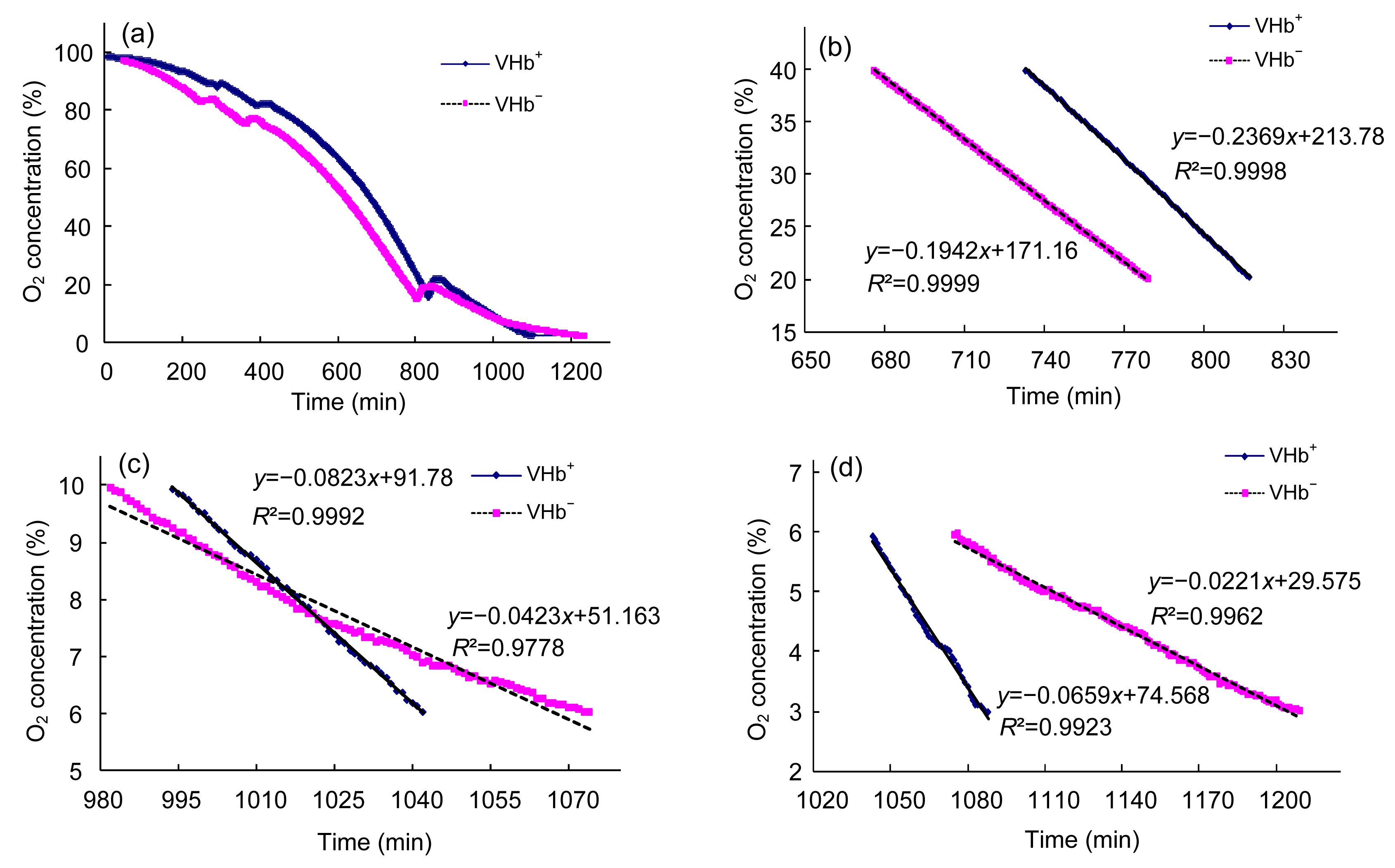 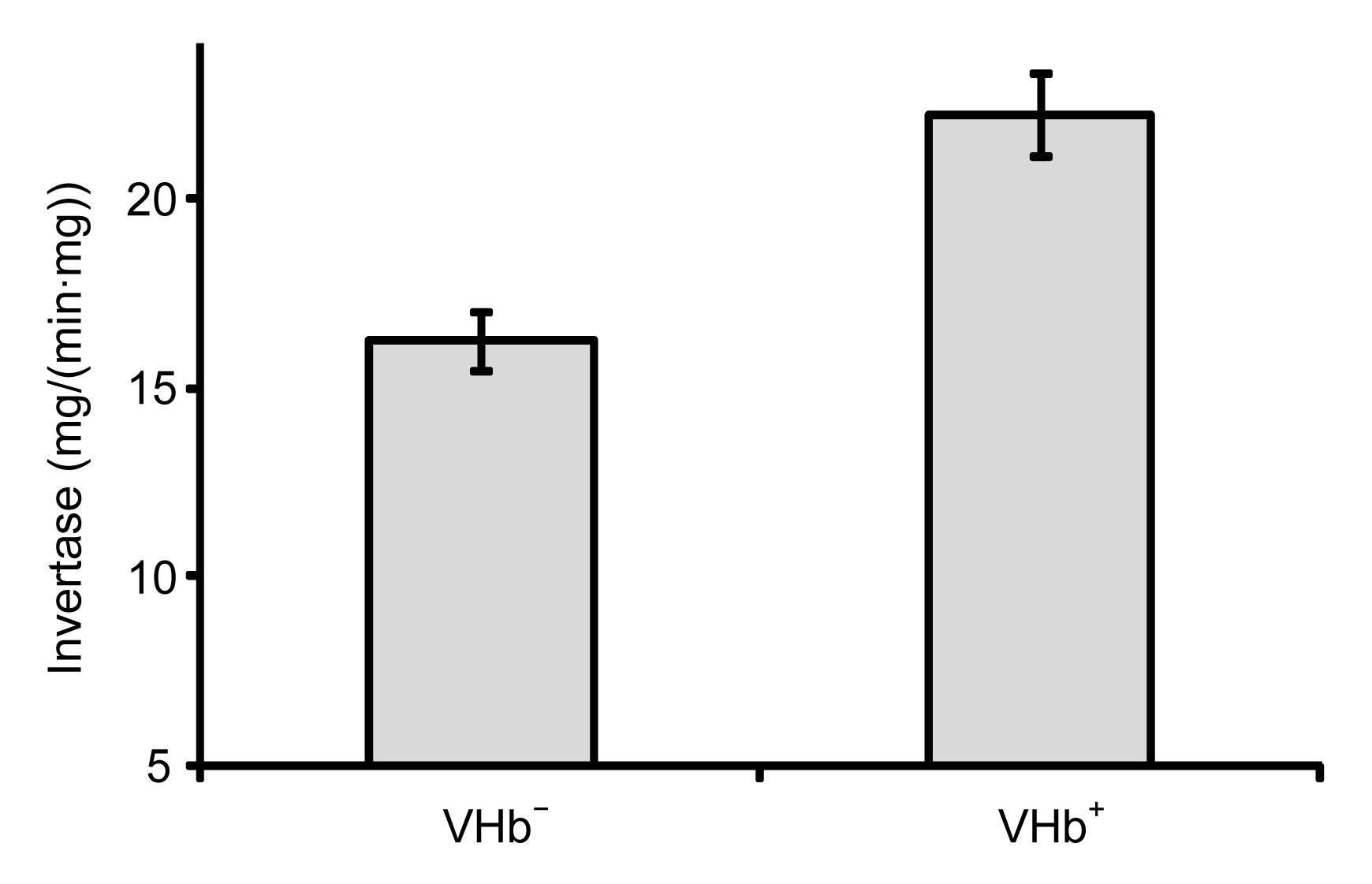 In order to overcome the O2 limiting during Salecan fermentation, we cloned the Vitreoscilla hemoglobin gene, vgb, into a broad-host-range plasmid pCM158 to form pCM158-vgb. The plasmid could persist in the host Agrobacterium sp. ZX09 for at least one passage without antibiotic selection. The engineered strain Agrobacterium sp. ZX09 increased Salecan yield by 30% without antibiotic selection pressure. The benefit for the approach is its ease of handling and usefulness for field fermentation.

We would like to thank Mary E. LIDSTROM from the University of Washington, USA for providing the plasmid pCM158.


*&nbspProject supported by the Fundamental Research Funds for the Central Universities of China (No. 30920130121013) and the National Natural Science Foundation of China (No. 31300111)Compliance with ethics guidelines&nbspYun-mei CHEN, Hai-yang XU, Yang WANG, Jian-fa ZHANG, and Shi-ming WANG declare that they have no conflict of interest.