Coronary artery disease (CAD) is a multifactorial, complicated disease and is the leading cause of mortality in most low- and middle-income countries (Lopez et al., 2006). Its exact underlying mechanisms are still not fully understood. However, interaction between gene and environment may be particularly relevant (Marenberg et al., 1994). In recent years, many studies have focused on the association between polymorphic variants in candidate genes and CAD. Among them, matrix metalloproteinase-9 (MMP-9) is one of the potentially relevant candidate genes.

MMP-9, also known as gelatinase B or 92-kDa type IV collagenase, is one member of the MMP family, which forms a large family of zinc-dependent enzymes that can degrade the extracellular matrix and contribute to both normal and pathological tissue remodeling (Newby, 2005). Epidemiological study has indicated that the higher plasma concentration of MMP-9 may be a predictor of cardiovascular disease risk (Blankenberg et al., 2003). The MMP-9 gene has three major polymorphisms in the promoter, coding and untranslated regions (Zhang et al., 1999b). Of these, the C1562T (rs3918242) polymorphism (C→T) in the promoter region is of special interest, for many studies have found a close association between C1562T polymorphism and CAD (Cho et al., 2002; Morgan et al., 2003; Koh et al., 2008; Zhi et al., 2010). However, some other studies (Haberbosch and Gardemann, 2005; Alp et al., 2009) did not found such a close relationship.

These studies drawing different conclusions make us puzzled, as one single study may fail to completely demonstrate the complex relationship. Therefore, we performed a meta-analysis to resolve this issue.

We searched the PubMed and Embase databases to collect all publications on the association between MMP-9 C1562T polymorphisms and CAD (last search update: Sept. 25, 2011). The language was limited to English only. The following key words were used: MMP-9 or “matrix metalloproteinase-9” or “gelatinase B” or “type IV collagenase”; polymorphism or SNPs or “polymorphism, single nucleotide” or genotype or mutation or variants; “coronary artery disease” or “coronary heart disease” or “ischemic heart disease” or “stable angina” or “unstable angina” or “myocardial infarction” or “acute coronary syndrome”. Then the results were combined by the Boolean operator “AND”. We further retrieved reference lists from included papers to avoid missing any relevant studies. The following criteria should be satisfactory for the included papers in our meta-analysis: (1) case-control study; (2) only CAD as the study outcome and the site should be C1562T; (3) the control group should not have any disease that is related to CAD; (4) the distribution of genotypes in CAD and control groups should be obtained directly or according to calculation; and (5) the genotype distribution in the control group should meet the Hardy-Weinberg equilibrium.

Two authors independently extracted the following information from included publications: the first author’s name, publication year, region of study origin, age of patients, number of men/women, and number of patients in different genotypes. If there were any disagreements, a consensus was agreed by discussion.

The meta-analysis was performed by Stata 10.0 software (Stata, College Station, Texas, USA). First, the overall odd ratios (ORs) and 95% confidence intervals (CIs) for C1562T TT+TC versus CC genotype between CAD and the control groups were analyzed. Subgroup analysis was further conducted according to different races. A heterogeneity test was assessed by chi-square-based Q test and I 2 test. A fixed-effect model was used to evaluate the OR and 95% CI if no significant heterogeneity (P>0.05 and I 2<25%) existed. Otherwise, a random-effect model was selected. Publication bias was evaluated by Begg’s funnel plot and Egger’s test; a P value >0.05 was considered as no potential publication bias.

3.1.  Characteristics of the included studies 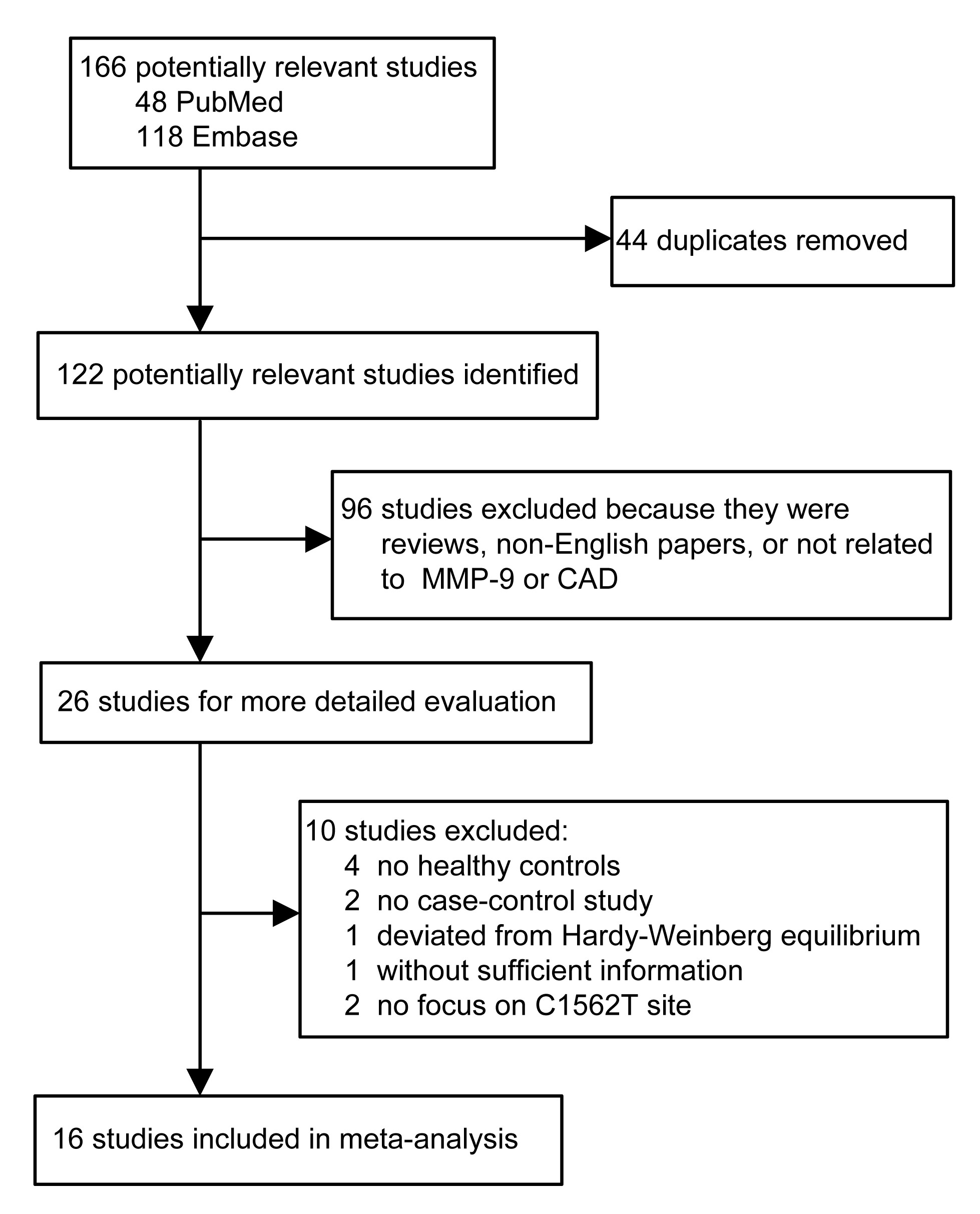 Fig.1
Flow of included studies of this meta-analysis

Characteristics of studies included in this meta-analysis
NA: not applicable 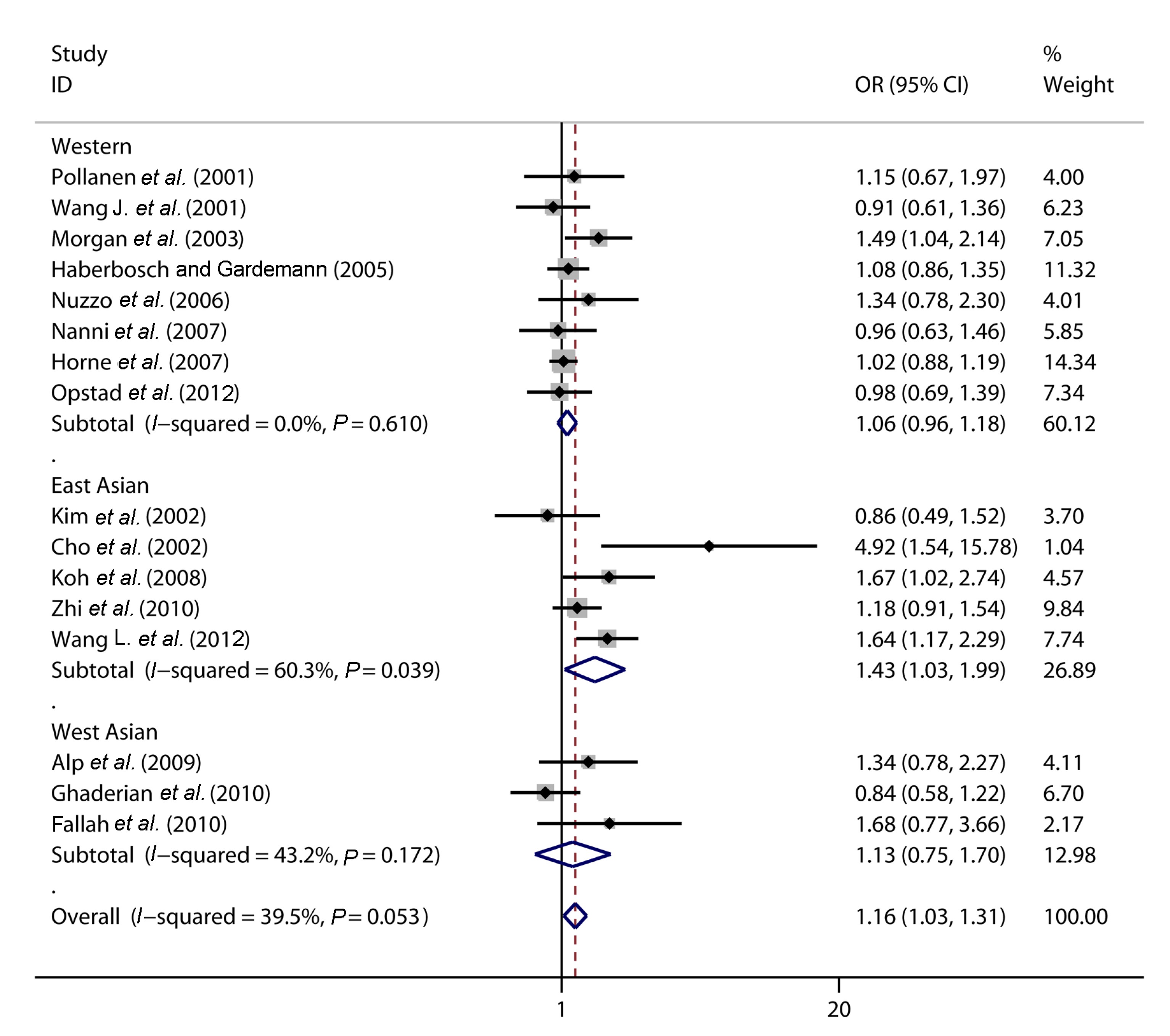 Fig.2
Forest plot of association between C1562T and CAD 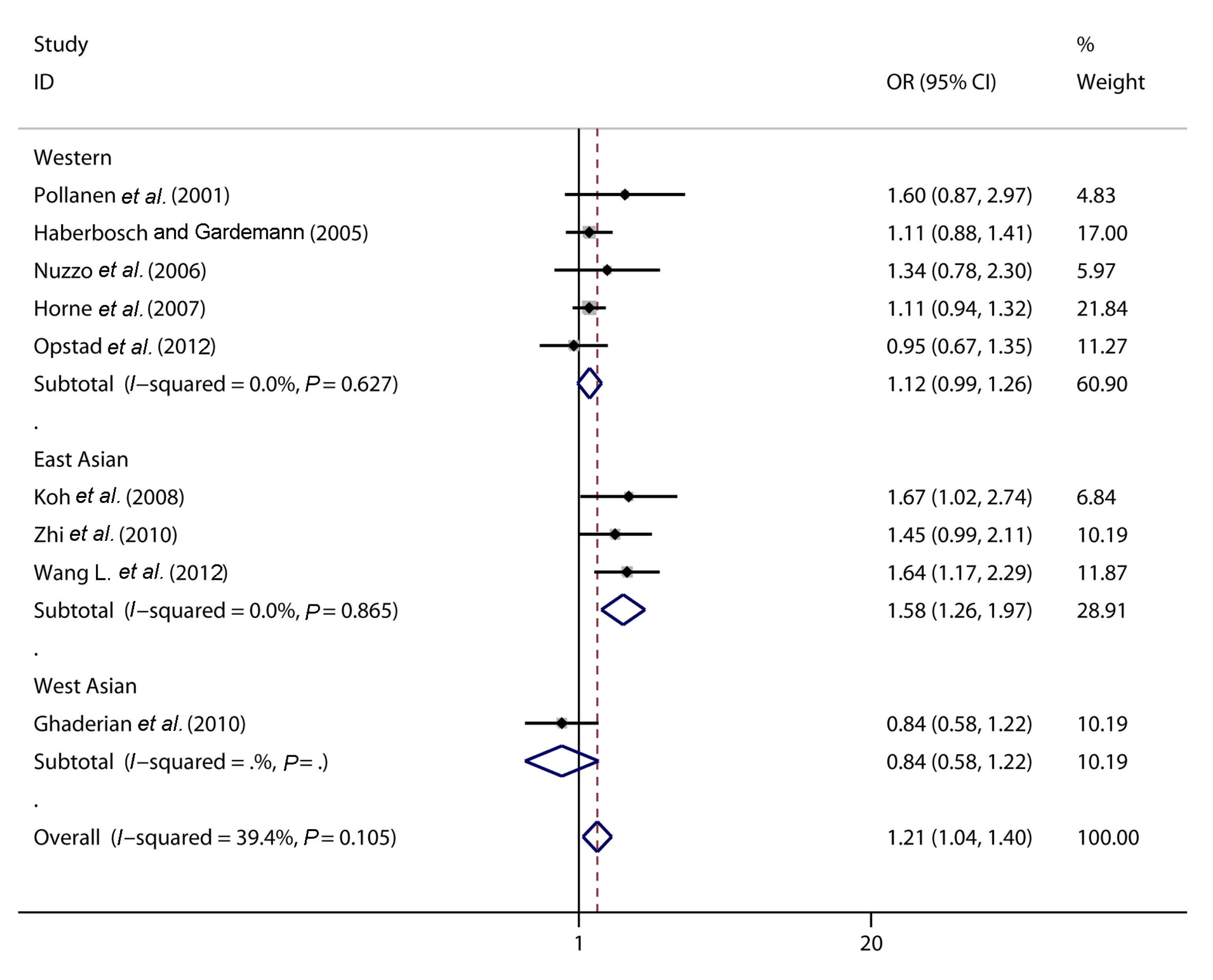 Begg’s funnel plot and Egger’s test were chosen to detect whether there is potential publication bias in the studies. As is shown in Fig. 4, no significant publication bias was observed in TT+TC versus CC genotype for CAD or MI (Egger’s test P=0.072 and 0.263, respectively). 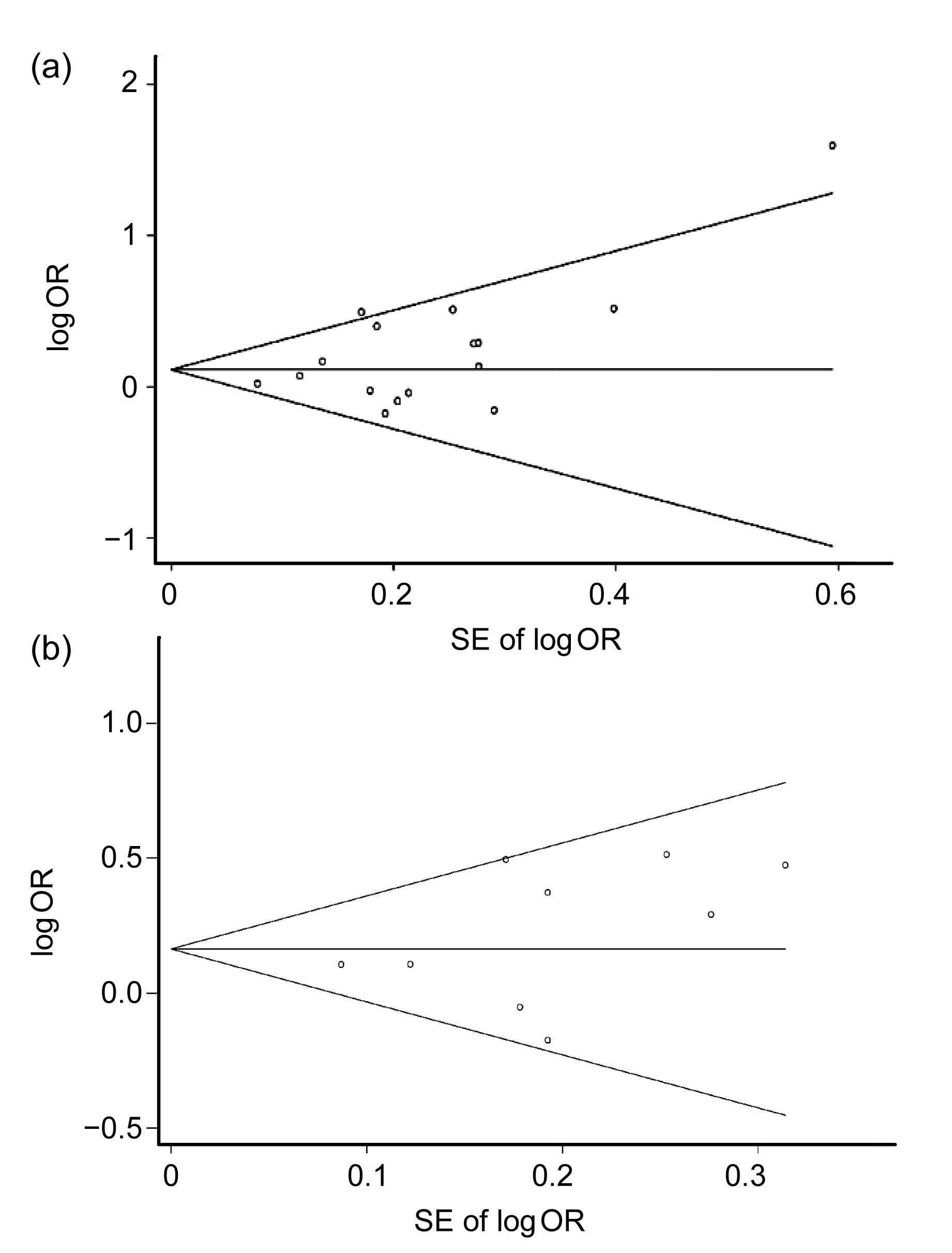 As a member of MMP family, MMP-9 might be especially important in matrix degradation and the subsequent atheroslerotic plaque rupture because of its extensive substrate specificity and distal position in the proteolytic cascade reaction. Indeed, MMP-9 was highly expressed in the shoulder regions of advanced atherosclerotic lesions (Galis et al., 1994; Brown et al., 1995). Its concentration and activity were significantly higher in unstable atheroseclerotic plaque with intense inflammatory cell infiltration, hence contributing to the plaque rupture ultimately (Loftus et al., 2000; Pasterkamp et al., 2000). Some cross-sectional studies have reported that the plasma MMP-9 level was significantly higher in CAD patients, in particular in acute MI, than in control subjects (Kai et al., 1998; Tayebjee et al., 2005). Blankenberg et al. (2003) also showed that plasma MMP-9 concentration was higher in patients with CAD and might be a novel predictor of cardiovascular disease. However, some other cohort studies suggested that serum MMP-9 is not a strong predictor of CAD (Welsh et al., 2008; Jefferis et al., 2010). Some possible explanations are as follows: plasma MMP-9 level is affected by many factors, such as genetic polymorphisms of MMP-9, drugs, and other factors. Lacchini et al. (2010) found that there are interethnic differences in MMP-9 genetic polymorphisms. In our present study, we also confirmed that there was a significant ethnic difference of T allele distribution: the T allele distribution is much higher in CAD patients in East Asians but not in Westerners or West Asians. The relationship between MMP-9 genotype and MMP-9 levels is also quite distinct in different races. For example, no close association between MMP-9 genetic polymorphisms and plasma MMP-9 levels was found in healthy white subjects (Demacq et al., 2006; 2008; Lacchini et al., 2010). However, a positive association was confirmed in black subjects (Metzger et al., 2012). In addition, patients with CAD may take many drugs (such as statins) that could change plasma MMP-9 levels as indicated by some published studies (Souza-Costa et al., 2007; Izidoro-Toledo et al., 2011).

In our present meta-analysis, we found a significant association between MMP-9 C1562T polymorphisms and CAD and MI in overall population and East Asians. There are several possible mechanisms to explain the association between MMP-9 C1562T polymorphisms and CAD or MI. Firstly, in vitro transfection experiments and DNA-protein interaction assays (Zhang et al., 1999a) have suggested that T allele had a higher promoter activity than C allele: mutational T allele appeared to show preferential binding of a putative transcription repressor protein, and then the transcription repression process was relieved, contributing to production of more MMP-9. Secondly, MMP-9 might contribute to smooth muscle cell migration to intima, for smooth muscle cell migration rate to the vascular intima was markedly reduced in mice of MMP-9-knockout (Johnson and Galis, 2004). In addition, the expression and activity of MMP-9 are significantly higher in unstable atherosclerotic plaque with intense macrophage infiltration, and this may cause plaque instability and final rupture (Kai et al., 1998; Tayebjee et al., 2005). These above mechanisms would partially explain the relatively close relationship between T allele carriers (TT+TC genotypes) and CAD or MI.

There were some limitations to this meta-analysis. Firstly, no gene-gene or gene-environment interaction was evaluated. In fact, many other genes have been confirmed to be related to CAD, such as myeloperoxidase (MPO) (Asselbergs et al., 2004) and adiponectin (Horne et al., 2007). Environmental factors, such as diet and pressure of living, could also facilitate the occurrence of CAD. Secondly, a relevant article (Zhang et al., 1999a) was excluded because we could not obtain sufficient information to calculate the genotype distribution. Finally, studies in other languages (not English) were not retrieved. That may lead to bias although the Begg’s funnel plot and Egger’s test showed no potential publication bias.


Compliance with ethics guidelines&nbspXiao WANG and Lei-zhi SHI declare that they have no conflict of interest.